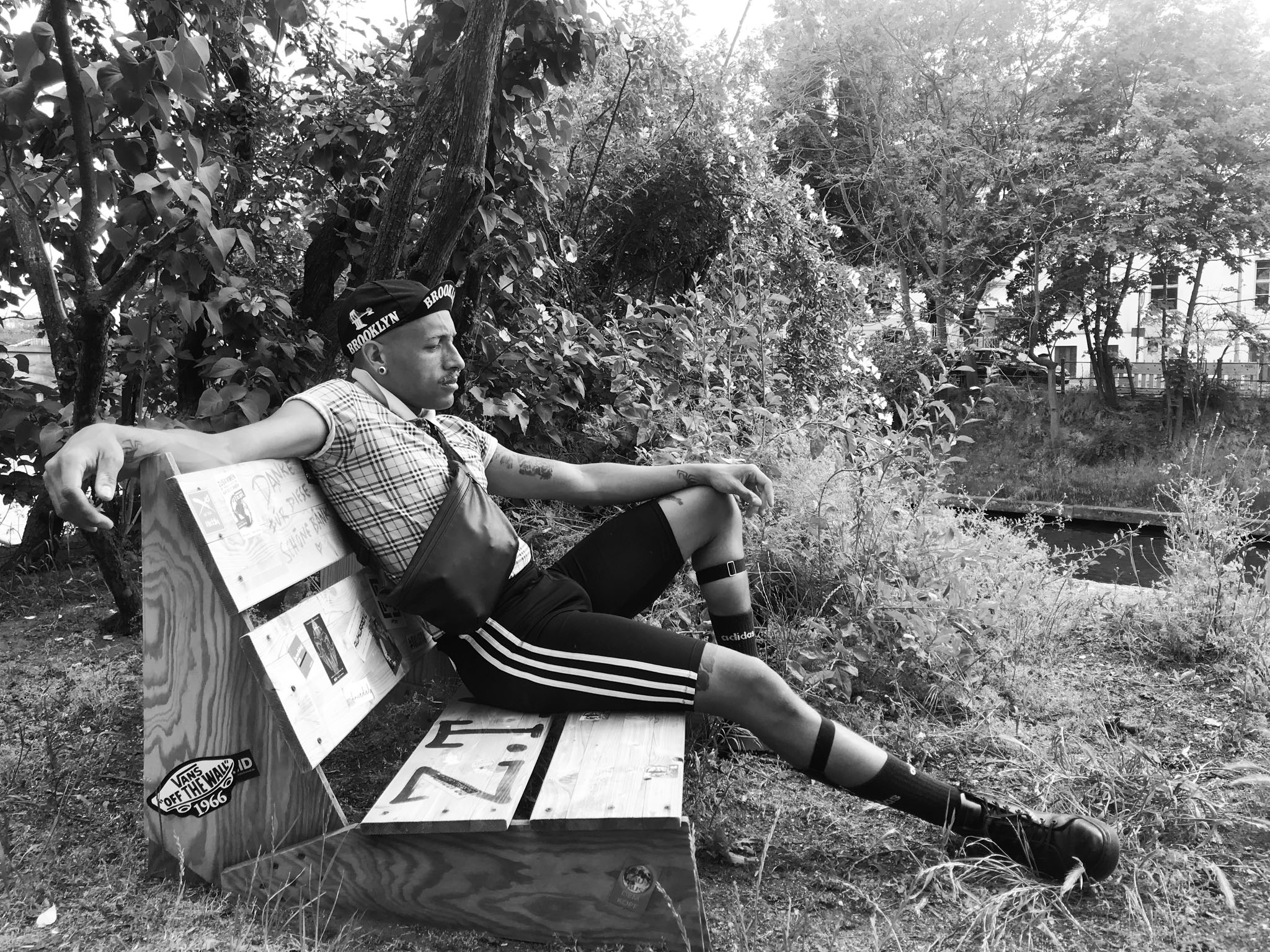 Walking around the streets of Kreuzberg or Neukolln, it’s hard to ignore the heaps of discarded furniture, clothes, home fixtures, treasures, and trash. Bella and Ben, founders of Benching Berlin certainly noticed. Where most people just see junk, they saw an opportunity to do something positive for the community.

Last year, they began transforming discarded wood and furniture into free spaces for people to sit down, take a load off, chat, eat, think, or just rest across the city.

Benching Berlin’s story, like many others, started from a small idea. Ben wanted a place to hang out outside of his flat, so he built a bench there. The bench quickly became very popular; a regular fixture for neighbours and friends. After seeing the success of the first bench, the transformation that such a simple addition made to his neighborhood, he decided to make another. By March 2019, Benching Berlin became a full-blown project, and Bella and Ben started placing more and more benches across Berlin, guerilla-style. 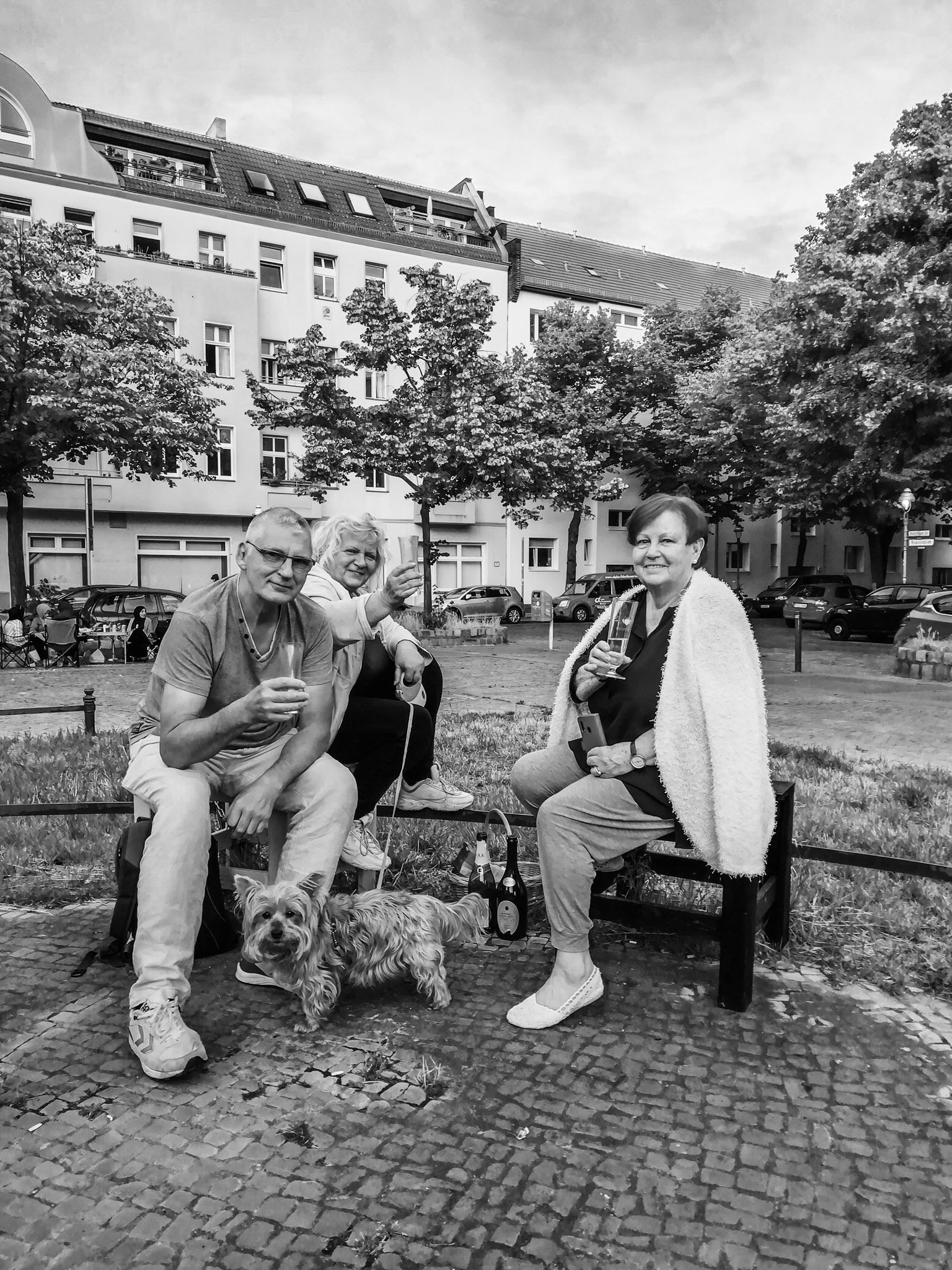 The project isn’t just about up-cycling and repurposing things lying around on the street, though. Although there is a strong sustainability component, Ben and Bella have also used their organization to empower people to get involved in the way space is allocated in their neighborhoods and in their city. LOLA caught up with the pair to discuss what goes into making their benches, how the project has evolved, and why building benches is a great way to protect and reclaim public space in Berlin.

How did you get all the materials and funding together for the original benches?
Most of our benches are built of salvaged materials we find on the streets of Berlin. These are usually old cupboards, shelves, or other stuff that people want to get rid of and leave in the streets. When we find something we like, we pick it up or cycle it up directly. In rare cases, we also buy wood from the lumber yard, which we then finance on our own. We also fund our own tools and hardware. What was the public’s reaction to the first bench in Neukolln?
The public’s reaction to the first benches was very encouraging. In fact, the positive reaction of many neighbours was a key motivation to scale-up and make building benches a project on its own. After a very short time, people started not only using, but also taking care of and regularly cleaning the benches. People met up there, brought their chairs to sit in larger groups, and ultimately created a new space for recreation directly in the streets of Berlin-Neukolln.

How has the project grown?
Since kicking off the project in March 2019, we have probably built around 30 benches, which were put up in different locations – mainly in Berlin-Kreuzberg and Berlin-Neukölln. Unsurprisingly, some of them got removed or destroyed over time. But most of the benches are still in place and are being used for meeting up, taking a break, or just hanging out. On our Instagram account @benchingberlin we collect photos of all the benches and the people hanging out there. 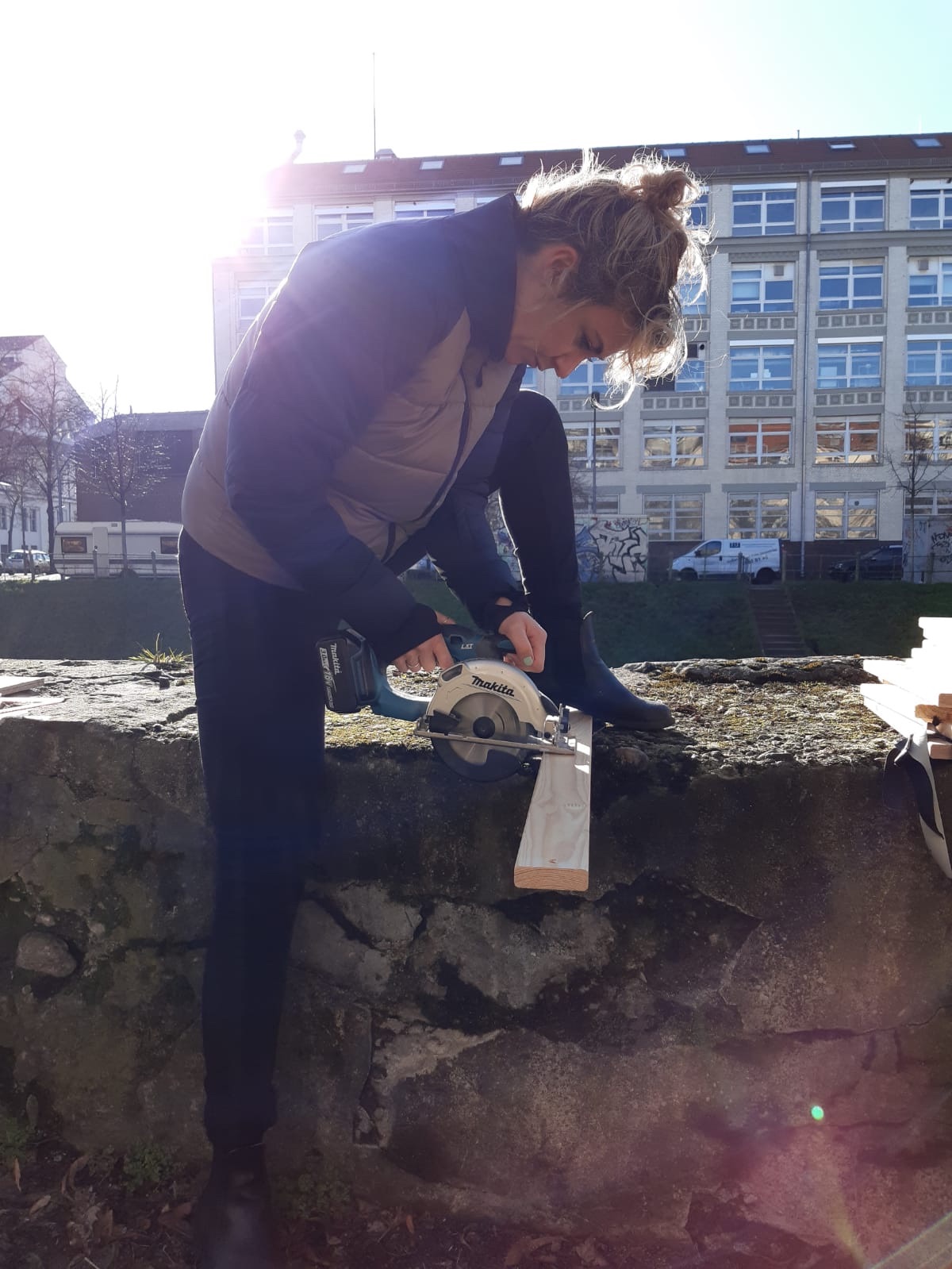 How do you choose where to put a bench?
Usually we find the spots when we go for a walk and find a place that looks comfy. We do like places that are a bit hidden and therefore provide some privacy. Often we see places that are obviously a perfect spot to hang out, but there’s no way to sit down, such as Hertabrücke in Neukolln. It’s actually quite funny to see how these places evolved into being new Kieztreffpunkte or typical dating spots after we put up the bench. However, we are always open to suggestions for new bench spots.

Have you received any backlash from city authorities, individuals, or local organizations for placing the benches around Berlin?
So far it has been quite the opposite, actually! For instance, Monika Herrmann, the mayor of Friedrichshain-Kreuzberg, tweeted something like, “nice city furniture,” as a reaction to our benches last summer. We have to admit, though, that we always take care to put up the benches in a responsible way, which means that they don’t bother traffic. Are there any bureaucratic roadblocks when building and installing benches?
None that we are aware of. It’s probably quite similar to seed bombing or guerilla gardening.

As all your benches are made from recycled wood, would you say that this project has a strong sustainability component? Are there any other missions that drive Benching Berlin?
Sustainability is indeed one of the key components of our project, but there are others. First, we would like to increase the amount of recreational spaces that are free of charge. In some Berlin districts, the only benches left are the seats of cafes or restaurants, which excludes people with low incomes. And second, we would like to make people aware of how unfair public space is distributed within dense urban spaces. Instead of recreation, public spaces are widely reserved for cars. 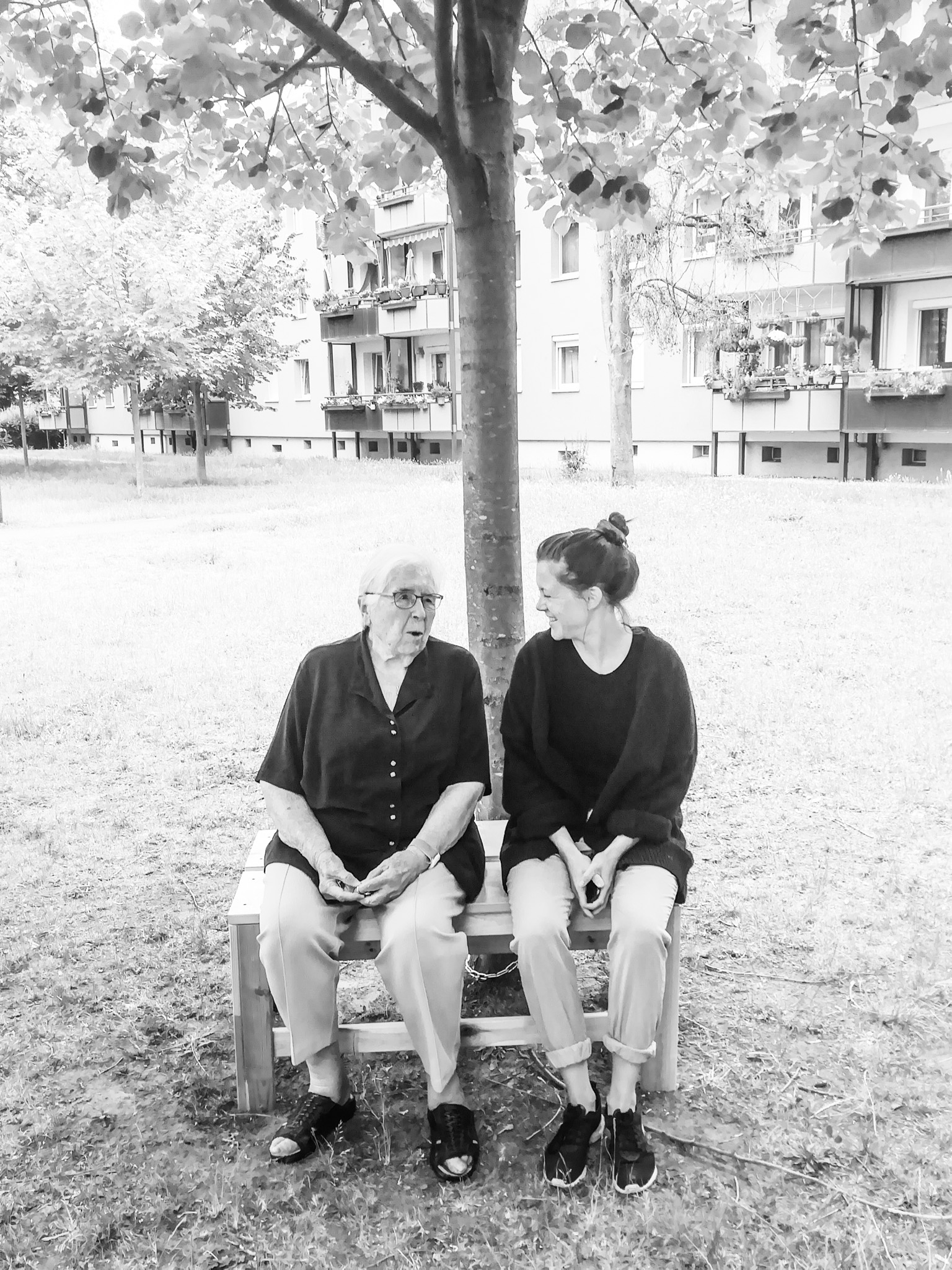 What message do you think your benches are sending about public space to the public, especially considering the rapidly changing cityscape?
We both didn’t grow up in wealthy families, so we didn’t go to fancy restaurants as children, but we learned how to create the perfect night out in the park or other public places with food we brought from home. When we came to Berlin years ago, everyone was doing this. There is even a whole kind of culture around having a späti-beer on the streets. Even if we are able to afford fancy restaurants nowadays, it is really important to us that people sitting outside with their food brought from home, with their späti-beers, remains normal in the city-scape. Benches in public spaces invite people to do so, and therefore they include everyone: people without a balcony, young people on their first tinder date, the granny that needs a break. Did you know that the city is tearing down benches so homeless people won’t use them to sit or sleep on? With our benches we want to show that we actually need more, not less benches, especially considering the rapidly changing city-scape.

How has the project changed since the pandemic and lockdown began?
During lockdown we realised that people need some places to sit down outside, even more than before. Not everyone has the privilege of having their own balcony or a huge garden in the backyard. On the other hand, it was and is important to maintain distance, so we created some single benches that we put up at, e.g.  Kranoldplatz. We also made a video-tutorial so people could build their own benches. 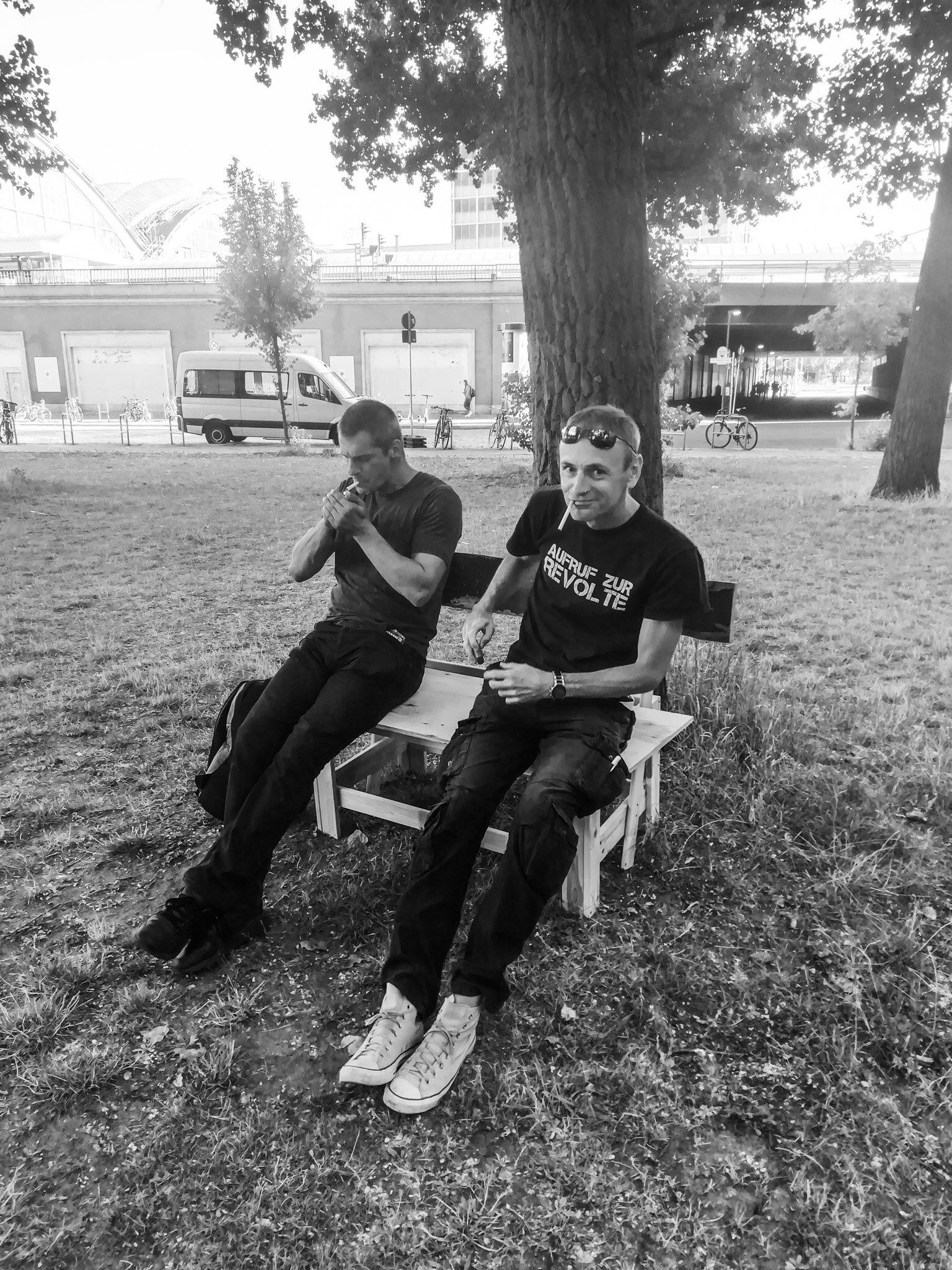 Can people join in the project? If so, how can they contact you?
Yes, everybody is welcome to join the ‘benching movement’. There are two ways to join. The first possibility is to make a bench on your own. If this is your first time and you would like to have some guidance, feel free to check out our instruction video for a beginner’s bench on Instagram. Another way is to join us when we go benching ourselves. Just send us a DM and we’ll get back to you.

What’s in store for the future?
We’re encountering two major adjustments. One is that we realized that we need a workshop to store our tools and wood in the long run. So far, we build our benches on the streets or at home, but we can’t expect our neighbours to be patient forever. If anyone reading this has a workshop that we could use from time to time, hit us up! The other is that we would love more people to build their own benches. When we were really busy with our jobs during the last few weeks, we could hardly keep up with our benching project.

You can keep up to date with the project via Instagram.