Skirt Club: A Safe and Sensuous Space for Sapphic Exploration 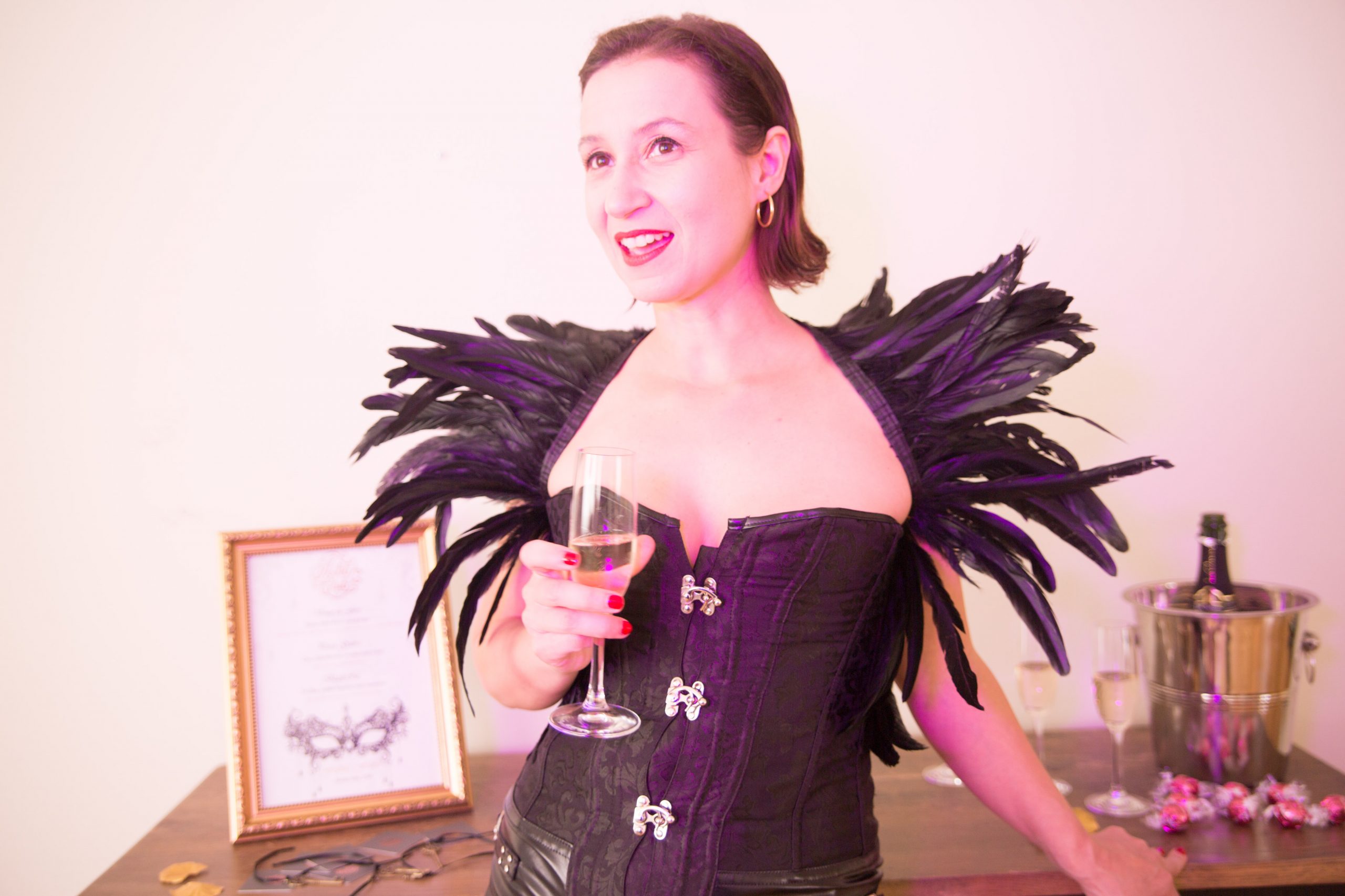 How does a mother, wife and businesswoman come to host private, luxurious sex parties with champagne and lingerie for up to 50 bisexual, bi-curious and heteroflexible women? How did she open up her marriage and embrace her own bisexuality? Marina Marquez explains how Skirt Club helps its members become more confident in the bedroom and the boardroom.

Kate: What is Skirt Club?
Skirt Club is a members club; it’s a community for bisexual and bi-curious women. Berlin is a city where it’s very easy to be open about your sexual preferences, but we also have members who live in a situation similar to mine, who are married or have more conservative jobs, and want discretion. The only person who knows the real names of the girls attending is me.

Marina: There are a couple of different types of Skirt Clubs; there’s a Skirt Club that’s an actual play party, and then there’s a Mini Skirt. What’s the difference?
We have around 11,000 members all over the world in the US, Asia, Australia, and Europe, and different events that we organise in different cities. The signature parties are the play parties, where we have some entertainment, we have cocktails, and we offer the opportunity for women to explore more if they want to. Every signature party is held with a theme. Themes we have had in the past were Desire, S&M bondage, Scarlet Señorita – which is a more Latin theme with salsa dancing – and we had Chocolate Noir, about chocolate and food and sexuality. 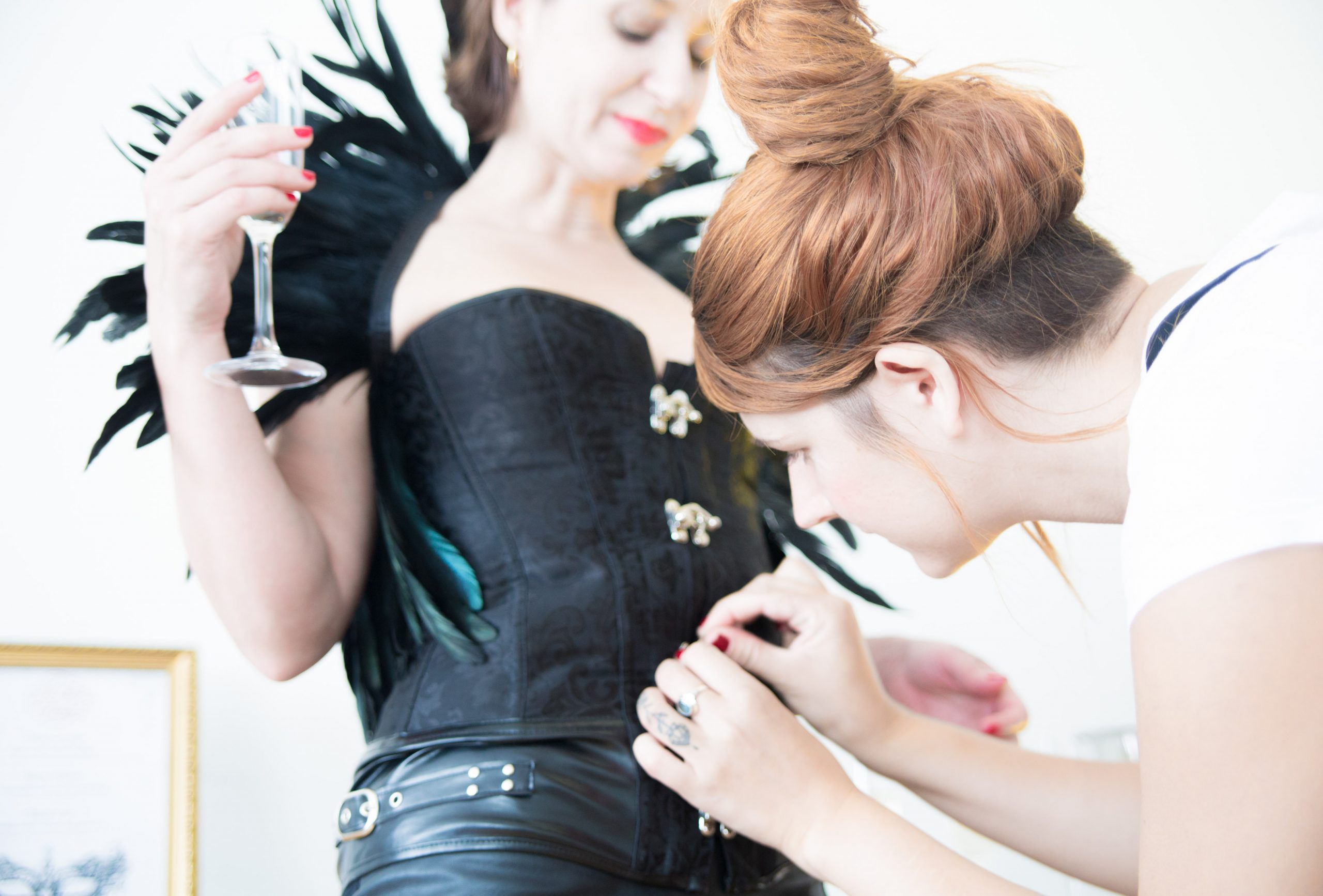 And what happens at Skirt Club parties?
As it turns out, even though the context of the event is a sex party, Skirt Club has actually provided a safe space for so much more. It’s about connecting and empowering each other. When it’s only women, it’s a different atmosphere. We behave differently if there are men. One lady telling the other how she looks beautiful and exchanging compliments; I always feel it’s a little bit more caring. Sometimes, the ladies come to the parties and don’t play at all because they realise they think women are attractive, they are very curious about it, but not yet at the point where they want to have sex with another woman. It’s about exploring yourself and finding out what you want and what you don’t want, and this is the safest place where you can do it.

The parties that we host here in Berlin have about 40–50 women, so you actually get to talk to everybody. It’s not as aggressive of a space as mixed play parties and it takes a longer time before things get hot and heavy. Sometimes you have members who know each other already, but you also have women who are there all by themselves for the first time. They may be insecure or shy, so we start by playing games just to make everybody feel more comfortable and sexy and to dare to see where their boundaries are. Am I going to take my shirt off, or am I going to kiss another girl, or am I going to touch someone? Of course, we don’t want to push anyone, we just want to open up the path a little bit. 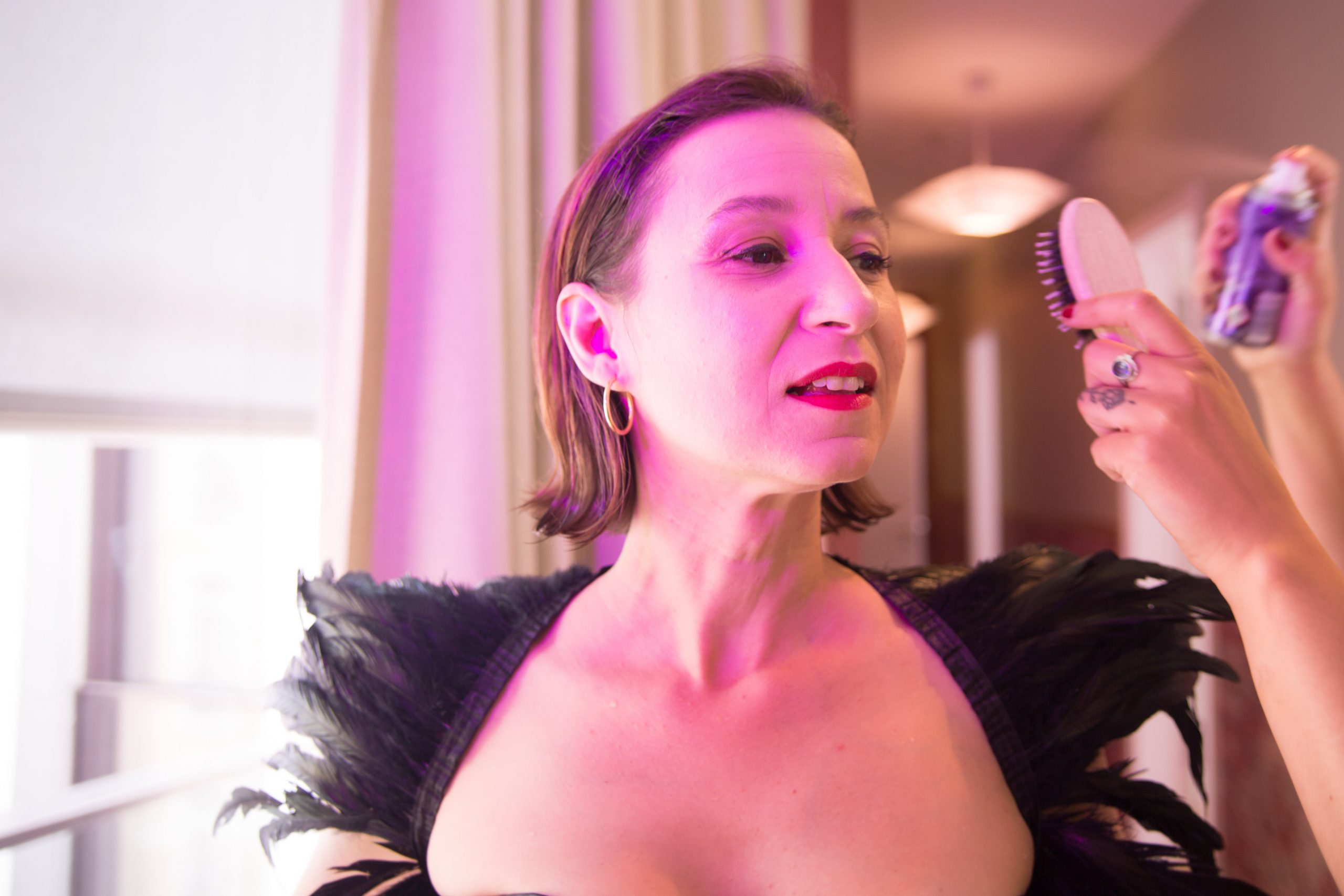 It is interesting, because women are not socialized to be the ones to initiate sex.
The founder, Geneviève LeJeune, has this motto for Skirt Club which I think is very true and important: confidence in the bedroom leads to confidence in the boardroom. I think that we have to learn to be self-confident. If you learn to accept yourself and your wishes and your desires, and to be confident in getting what you want, starting in the most private area, which is your bedroom, you can take it to the other spaces in your life, like your job.

How does a wife/mother/business owner, living a fairly mainstream life, gravitate towards this direction?
I’m 42 now, so I was a kid of the 90s in Berlin, going out to techno and house clubs and KitKat. So I have always been a part of it, but I started my business very early and had children very early, and had a more conservative way of life for a long time. I always knew that I liked girls, but I wouldn’t have defined myself as bisexual when I was younger because I never had a real relationship with another woman.

I got to know my husband very early, too, and had opted for a monogamous relationship. It was a wonderful relationship, I never missed anything, but the fantasies and thinking about other women was always there in my life. I read about Skirt Club for the first time in 2015, and in 2016 I was at the point where I thought that if we want to stay together and keep our good relationship and be happy, we have to be honest about our desires. He was the one who sent me the article about Skirt Club, and I thought, “This sounds amazing.” From that point, we opened up our relationship a little more and we got into the sex-positive community of Berlin step by step.

You can’t deny who you are and what you like – you can do it for a time, and there was a long time in my life where I was focused on other things, especially on the kids. I was also a little bit imprisoned in my own imagination of how a mother should be. I realised with Skirt Club that it doesn’t have to be like this. I can put myself first again.

And how did you first get involved with Skirt Club?
I went to the first big party with Skirt Club, here in Berlin, that was organised by Mona, my friend and colleague. It was exactly what I was looking for. I didn’t want to go out and date someone, because I wasn’t looking for a relationship or an affair. To be honest, I was looking for a sexual encounter with another woman. I wanted to find out more about myself and that side of my sexuality.

Mona invited me to talk for the Chocolate Noir theme event, and I thought, “Oh my god, I have to talk at this event in front of all these women? In English?! AAAH, oh my God I’m going to die!” But then I said, “Okay, I’m going to do this,” and Mona encouraged me a lot. And I realised I could do it. Doing this talk for Skirt Club, I got a little bit into the organisation and I realised how much I liked it. 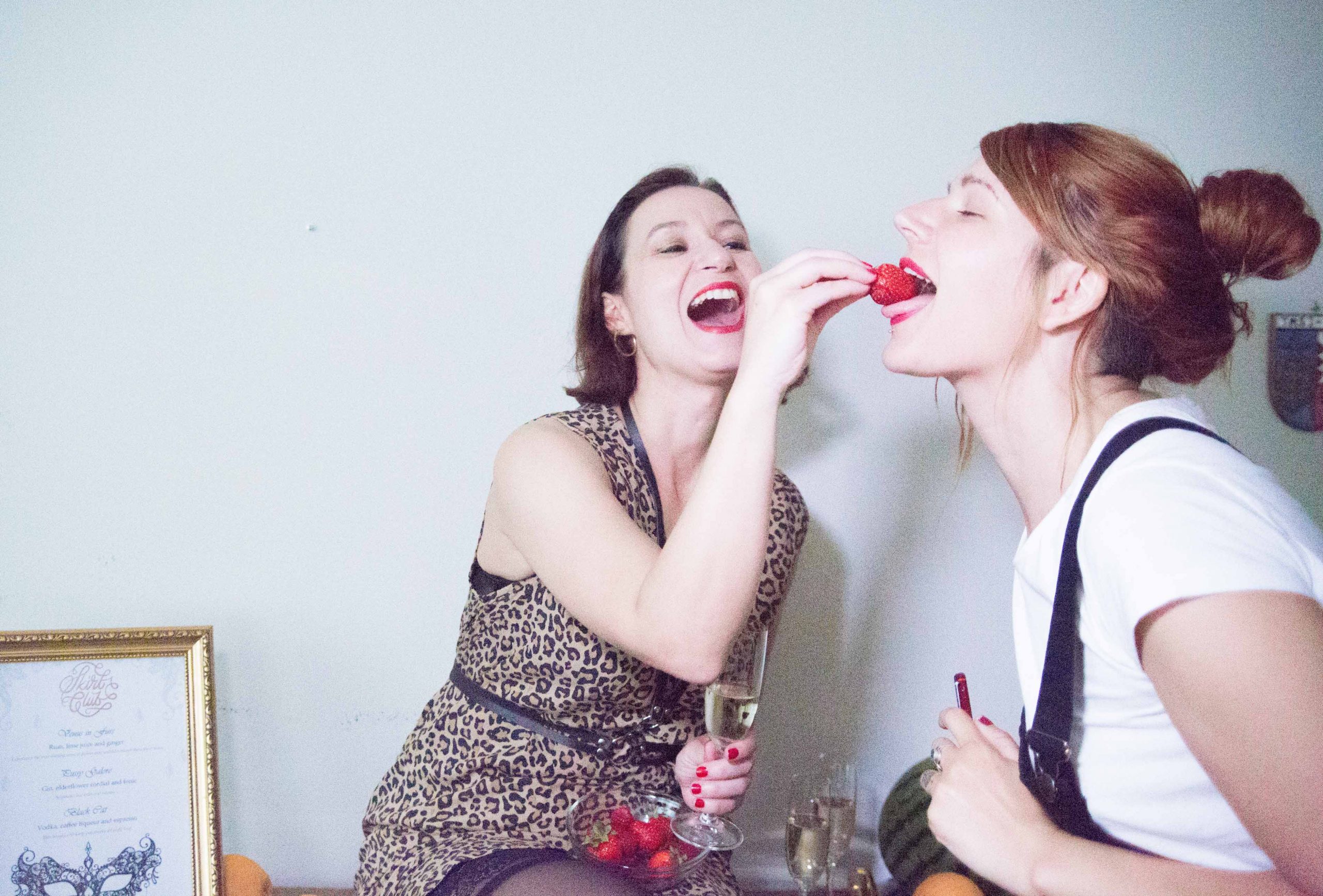 What about the outside world? How has the reaction been from friends and acquaintances or even strangers?
It’s been a process. I have two phones, I use a different surname. I told my best friends about Skirt Club when I decided to organise the event because I didn’t want to just keep telling stories, and their reaction was completely positive. Other mums, more conversative women, said, “Can we come?” There’s a little bit of admiration too, like, how do you dare do this, and what does your husband say, and what does it mean for you and your relationship? The reactions were mostly positive because they really like the idea that I want to do this for myself, to take care of myself, to put myself first.

I’m becoming more open about it. My kids know that I organise networking events for women. That’s enough for their age; they’re too young to talk about sex so much. When they get older, I think I will tell them about it, but now it’s too early. Doing this interview with you is another step. I don’t care what people think about it. In my view, I am doing something beautiful and important in working for Skirt Club. 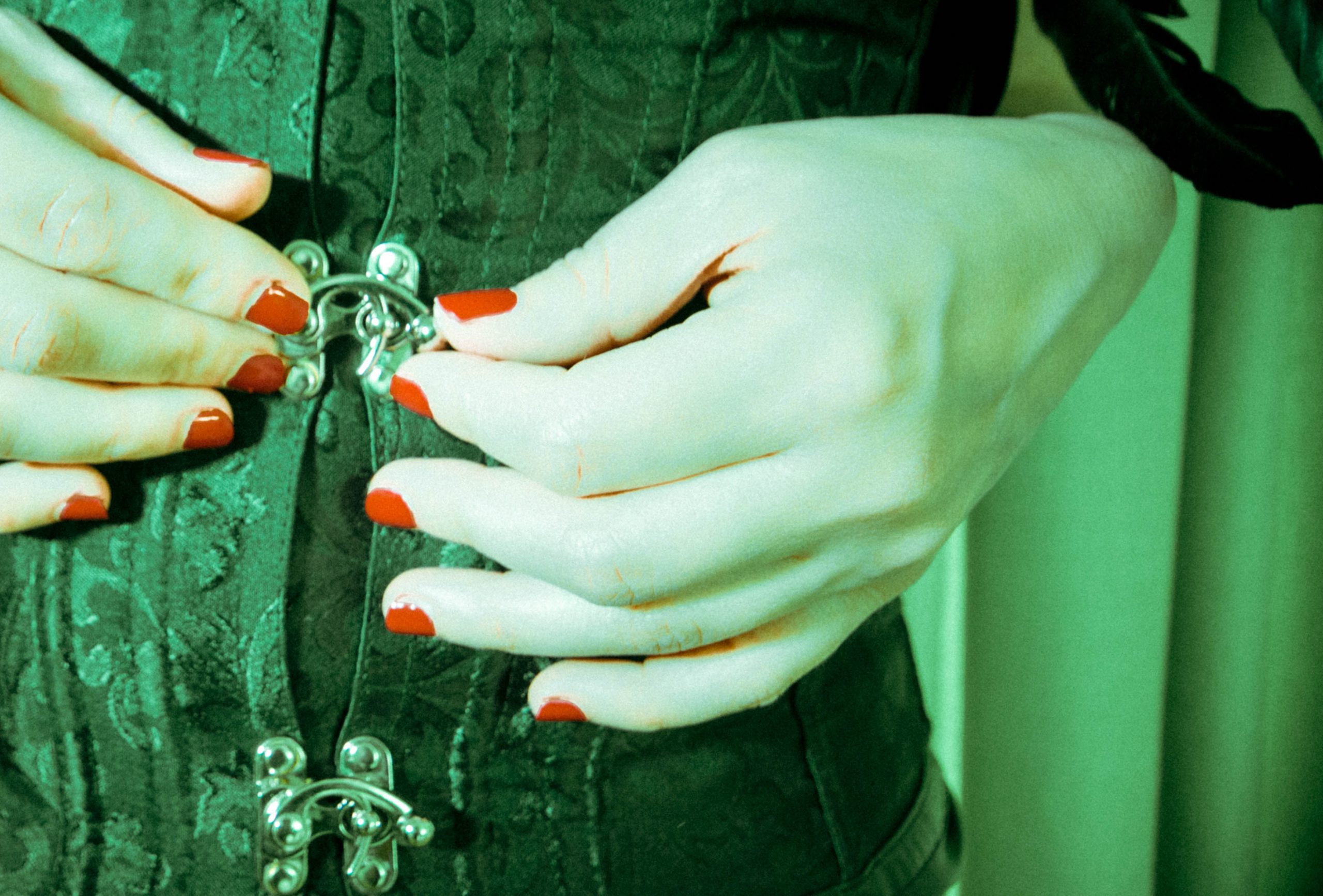 The way a lot of bisexual men express their sexuality is by going to gay parties. But I don’t feel that it’s as accepted for women to go to lesbian parties to experiment. I’ve heard that lesbian women are a bit cautious about bi-curious straight women, because they don’t want to get their hearts broken. It’s much more okay to go to the gay community to have sex, whereas with the lesbian community, you have to be more cautious.
I think that’s a good point. In the male gay community, you’ve had this anonymous sex since forever, and to accept that as okay for women is much harder because we’re not taught like this. If you’re a gay or straight man you have this masculinity that you can go out and conquer and it’s accepted in society. With women it’s not.

With Skirt Club, when you meet other members, you know that every woman there has the same secret, that they are sexually interested in other woman. So you already have this connection. Usually when you go out you see a woman and you like her, maybe she’s smiling at you and you have a nice talk, but, women are always nice. Maybe she’s talking with you and flirting with you, or she’s not really interested. You never know. And sometimes it’s really scary because you would like to flirt, but sometimes we don’t have the tools to know if they are interested in women.

There’s definitely a lot of queer people who come to Berlin because they feel free to express themselves and have huge septum piercings, unique haircuts, things that signal belonging to a certain community. Skirt Club, on the other hand, doesn’t really belong to a subculture per se. As you said, you had a somewhat conservative lifestyle before and especially if you have no signifiers, subcultures can be really hard to navigate.
I think that’s what’s really special about Skirt Club in Berlin. I could just go to KitKat and start flirting and it probably wouldn’t be so hard to meet someone. But most of our members aren’t really interested in nightlife or swinger clubs. They are in relationships and they aren’t really sure, they’re curious about it and want to meet like-minded women, so that’s what makes it so special. It’s not like the normal cocktail bar where you see this beautiful woman and it’s really very difficult. I think that’s why women feel comfortable coming to Skirt Club, because they know they don’t have to hide. If I like someone I can go and show her that I like her, and she is going to like me too or not, and it’s always about consent, of course, but at least the chances are very good. It’s much higher than when I just go out to a regular bar or club.

Find out more and learn about upcoming Skirt Club parties in Berlin at skirtclub.co.uk.