Inside World of Whorecraft 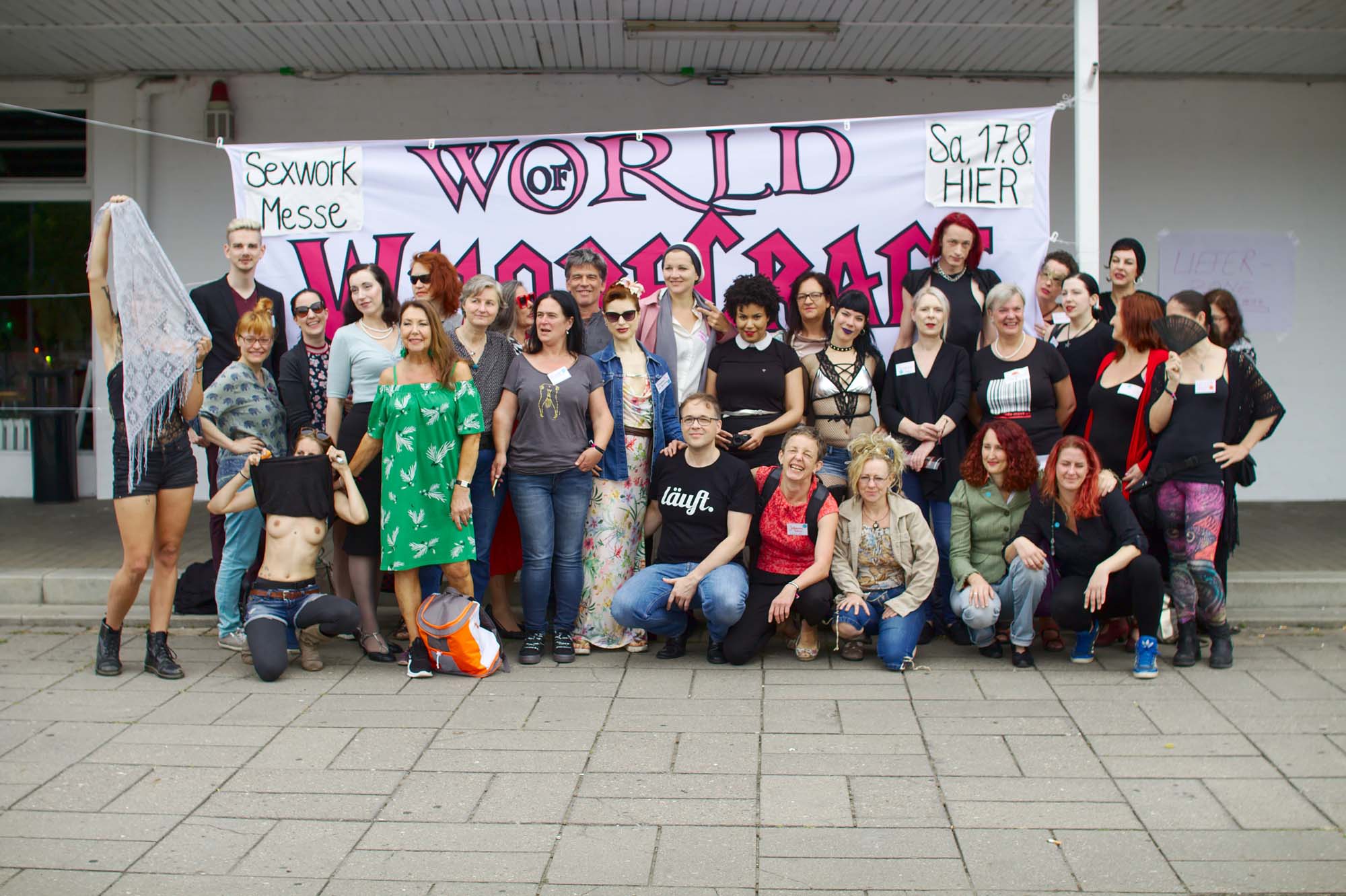 In an old supermarket building on a busy street in Berlin, around 200 sex workers came together for two days of workshops and talks. This year was the second ever HurenKongress (Whore Congress) in Berlin, continuing a long tradition of ‘strictly sex worker only’ national meet-ups in Germany dating back to 1985.

Proceeding the conference was the sex work fair, World of Whorecraft. The first of its kind in Germany, it was organised by Berufsverband für erotische und sexuelle Dienstleistung e.V (BesD e.V.), a collective of 300 active and former sex workers, who strive to improve conditions and representation for those working in the industry, Lilli Erdbeermund, the core organiser of BesD, explained that the event aimed to not only to connect sex workers with each other, but to “also open it to the public, enabling people to inform themselves about sex workers – by talking to them, not just about them.” 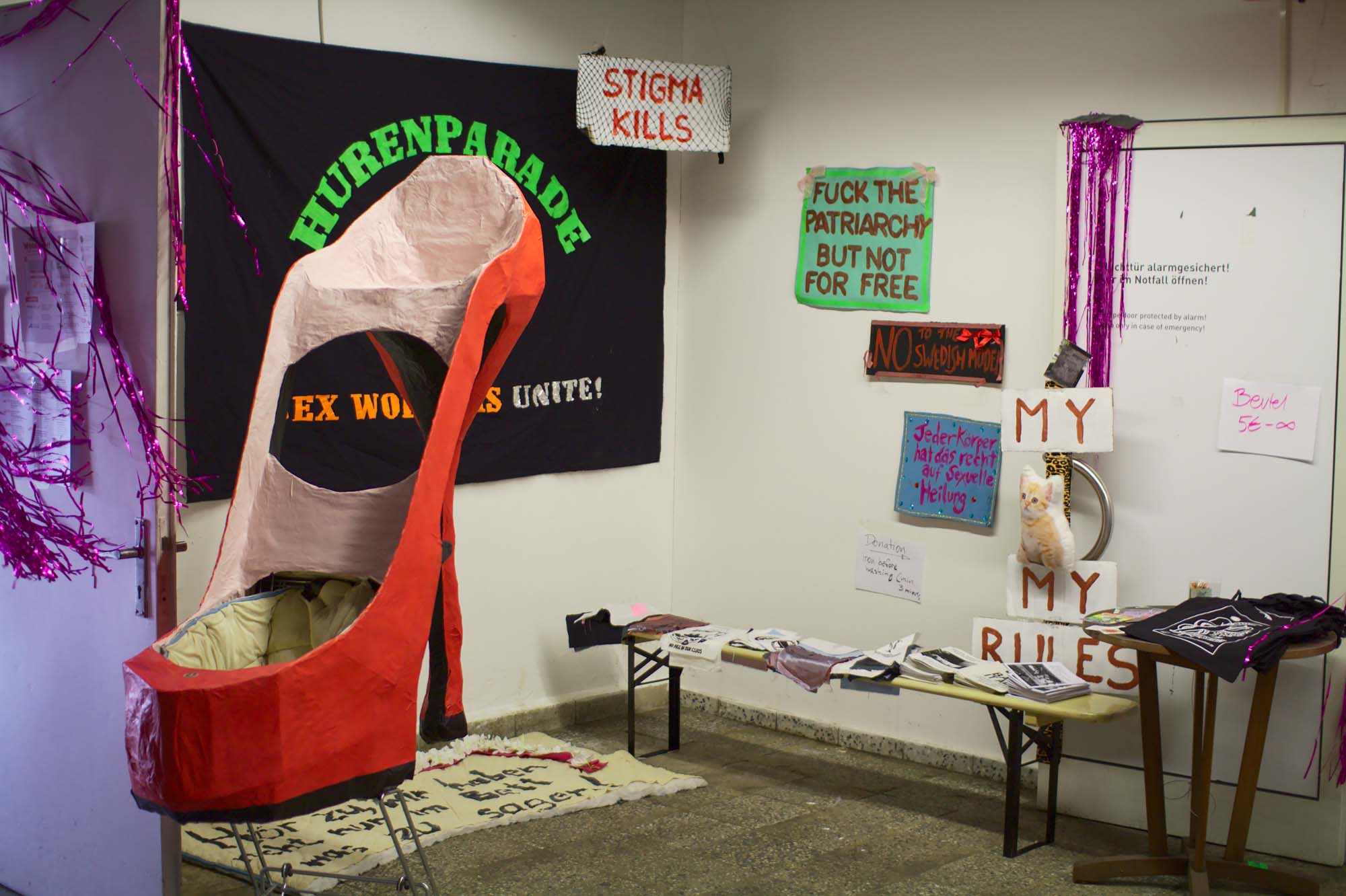 Display at World of Whorecraft

As you arrive at World of Whorecraft, you have to make two decisions: Whether to pay €7 or €10, and if you want to wear a red or a green-dot sticker. Red signifies that you don’t want your photo taken, green gives the go ahead. Official photographers were walking around, but no one else was allowed to take a picture. I chose the red dot. It was the wrong decision, and I’ll explain why later.

The entrance takes you through an electric-pink fringe curtain into the Messe main room. Just like any other trade fair, the lighting was bright and the walls were of a greyish, cream complexion. There was a stage decorated with red umbrellas, the global symbol for sex workers’ rights movements, with an array of stands around the room, each headed up by a different organisation or project.

The BesD stand was lined with stickers brandishing ‘Sex arbeit ist arbeit. Respekt!’ (Sex work is work. Respect!) and ‘Fight sexism, not sex work’. Available for free were pink postcards with an ornate, abstract pussy stating ‘Der wahrscheinlich, ehrlichste Job der Welt’ – ‘The most honest, enlightened job in the world’. Another pictured the Berliner Fernsehturm with a condom pulled over the top and a cartoon pouting face. Other stands included: Madonna, an archive of sex work in the media; representatives from Strich / Code / Move, an art project ‘building bridges between art and sex work’; Hydra, a counselling centre for prostitutes; an app (with the same name as this magazine!) for sex workers to share information; a sexual health centre handing out free STI tests, and others.

Objects of Desire, an exhibition showcasing prostitutes’ personal items and their accompanying stories, sat tucked away in the back corner. Four pairs of thick tights were piled up on one stand. They came from a sex worker who liked to layer up. “You don’t want to dress too fancy, because you’ll never get picked up. If you look cheap, customers will think you’re cheap, so they’ll take you,” read the accompanying story.

Pussy Tip was the title of another piece, displaying a condom with an inserted €50 banknote. It had been pushed inside the prostitute at the end of her service. The accompanying text stated that she initially felt strange that the client had pushed money into her. It would make her feel cheap if he’d have shoved a €10 note up there. In the taxi home she pulled out the package, discovering a 50. “Not bad”. A couple of Turkish pots gifted from a client, a lucky lighter, and a $7 handbag containing condoms, sex toys and a hat were also featured in the exhibition. 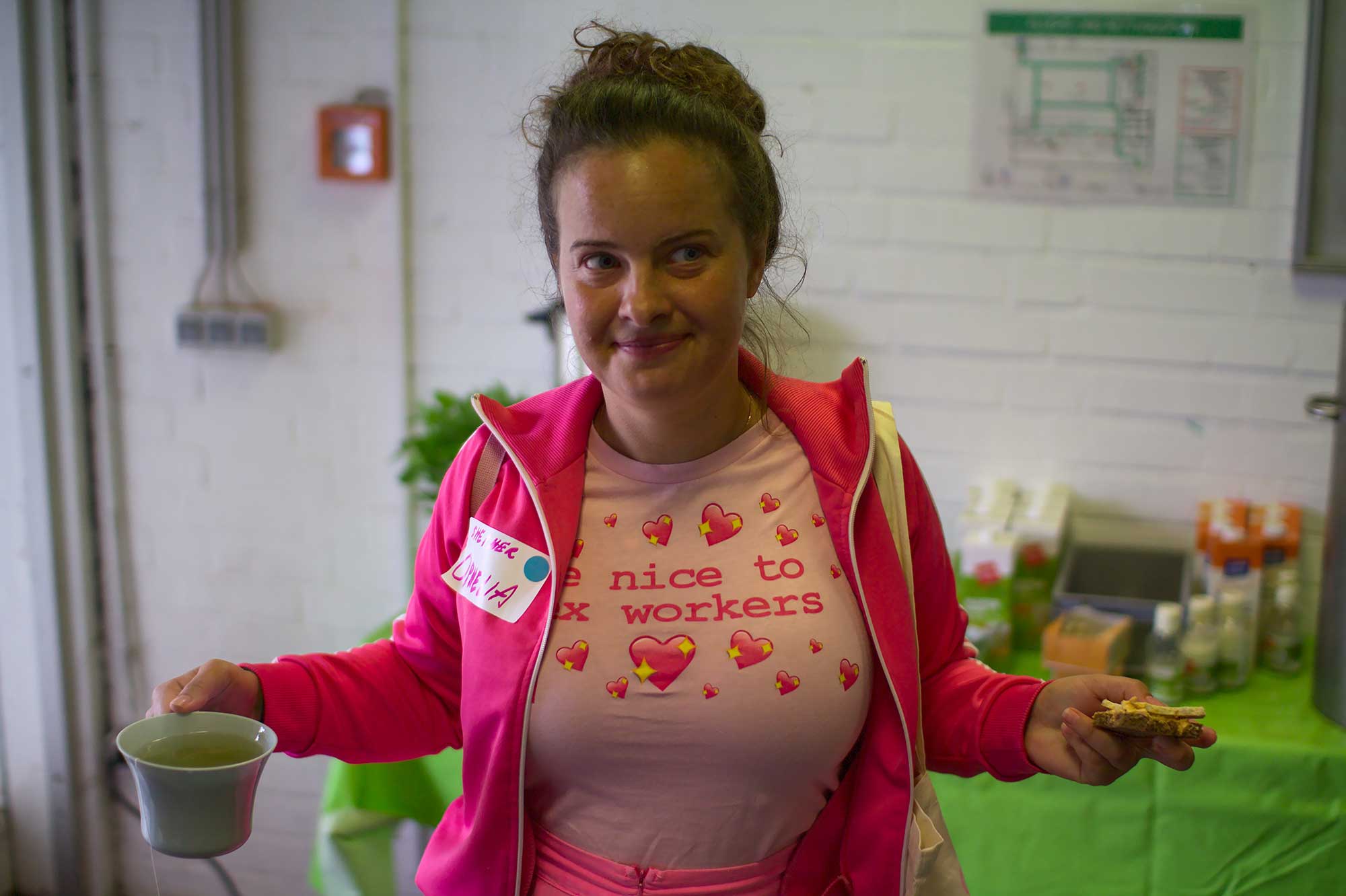 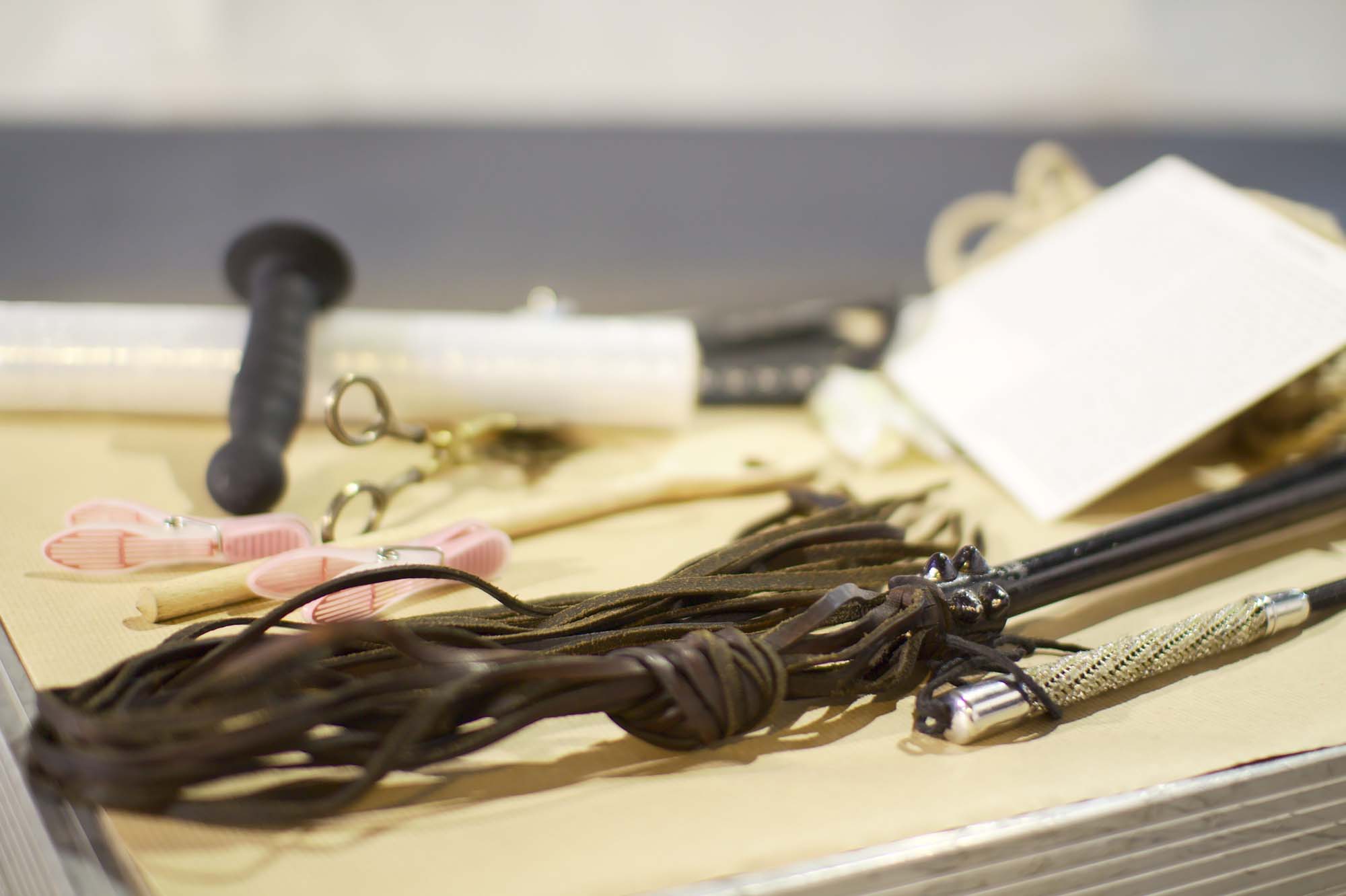 Whores on Film was up next. Juliana Piccillo, an American sex worker and documentary filmmaker spoke passionately about her fight against stigmatisation and the misportrayal of sex workers in pop culture. “Never in love, never having children, because sex workers don’t make good parents right?! Well ask my daughter, she would disagree.” Piccillo explained how film storylines tend to associtate sex work with violence, that prostitutes are unhappy, and sex work is never their choice. To top it off they’re usually riddled with problems and mental health issues. “Well, who doesn’t have problems? Everyone has problems!”

“Let sex workers tell their own stories” was Piccillo’s take-home message for wannabe allies of the industry. “Don’t decide for them what they need. Ask sex workers how you could be an ally. Don’t register us, and invade our bodies with STI checks. College kids go around getting drunk and hooking up without condoms – you don’t force them to get tested. If you’re an academic wanting information from us, that will advance your career, PAY US FOR OUR TIME! You want to make marginalised people work for free?!” Whoops and applause broke out in the audience. Salomé Balthus closed the show with extracts from her blog, The Column of the Whore. She played with a small puppet man prop as she read aloud from a piece titled Beeing a Happy Hooker. “In the elevator, a quick glance in the mirror – my hair is wet, my eye make-up is smudged, but my skin is glowing, my cheeks are rosy after sex and I feel pretty. I believe I never look as good as I do after some hours of fruitful sex.”

Up until April 2019 Salomé Balthus had a column in Die Welt titled Das Kanarienvögelchen. She was fired after speaking out about an insulting talkshow interview, whereby Roger Schawinski implied that she must have been sexually assaulted as a child to have wanted to become a prostitute (a common stigma of prostitution).

It was now that I realised the red dot sticker I had chosen at the entrance was the wrong decision, because when I approached people to ask for their opinions, I noticed a couple of them glancing down at the colour. “You’re not a sex worker are you?” some commented. Most of the visitors at World of Whorecraft seemed to have given the green light to their photo being taken. I peeled the sticker off my chest and stuck it to a leaflet in my bag. I wanted people to trust that I was on their side.

The fight for rights, the battle against stigma, the safe space area strictly for sex workers. All of these elements of the fair gave the impression that sex workers feel mistrusted, misunderstood, patronised and attacked by the rest of society. Some people I spoke to were initially reluctant to talk to me, because ‘articles about sex workers should be written by sex workers.’ 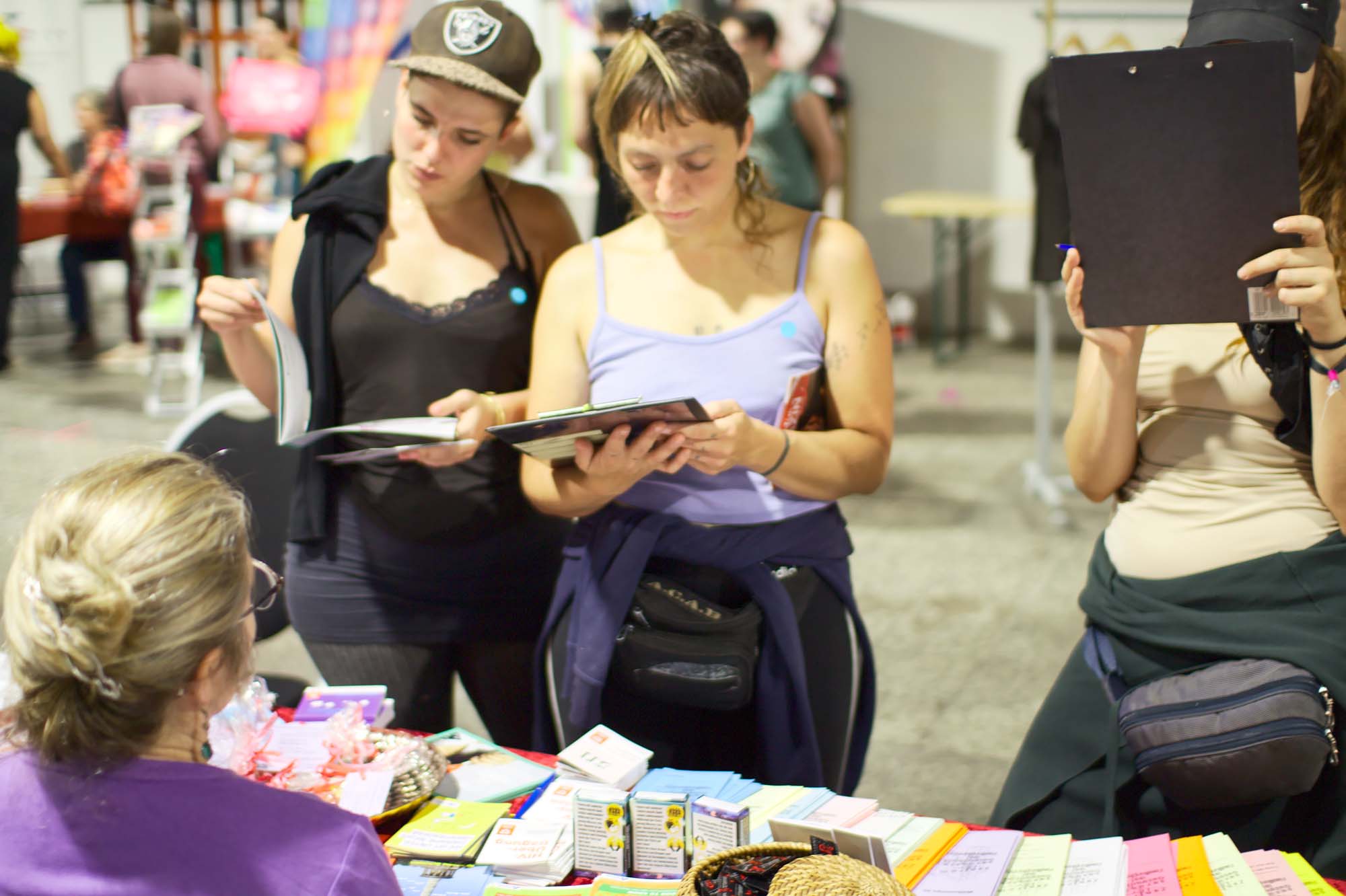 I came to World of Whorecraft to better understand the situation for sex workers in Berlin. I wanted to gather opinions on the recent proposal to install “Verrichtungsboxen” – regulated booths where prostitutes can meet clients in the Tempelhof Airport building, the former Nazi-built airport, landing site of the Berlin Airlift in the Cold War, and most recently, temporary shelter for newly arrived Syrian refugees.

The drive-in sex booth proposal comes from Mitte’s Bezirksbürgermeister, Stephan von Dassel, who wants to ban prostitution from the long- standing sex work hotspot Kurfürstenstrasse, an area of increasing gentrification. Tempelhof Airport would be an alternative space for sex workers to use. The sex booths are marketed as being regulated, safer spots for sex workers to carry out their transactions. But no one I spoke to at World of Whorecraft was buying it. Of course, being shut away in a box is not an attractive proposition.

Olga, a sex worker in Berlin, spoke out against it. “People in power should stop pretending they care about sex workers. Their methods reveal that they just want to get rid of us at any cost. Registration? Mandatory health counselling? Special booths? Sounds kinda ‘Nazi’  to me. Politicians only care about looking like they are doing something about ‘the problem’ and are willing to harm any number of sex workers to accomplish that…Look at the research instead, look at reccomendations from Amnesty, WHO etc. and make laws that give sex workers rights instead of trying to make them disappear.”

In Germany sex work is legalised, but that is not the same as being decriminalised. In 2017 the Prostitutes Protection Act (Prostituiertenschutzgesetz) introduced a host of unpopular measures for sex workers including the Hurenausweis (whorespass), a registration ID with a photograph that must be carried at all times. Working without the ID could result in fines of up to €1,000, and brothels face closure if they are caught employing people without the Hurenausweis. Mandatory health counselling sessions. Strict brothel regulations. One consequence of the new law: increased stigmatisation. 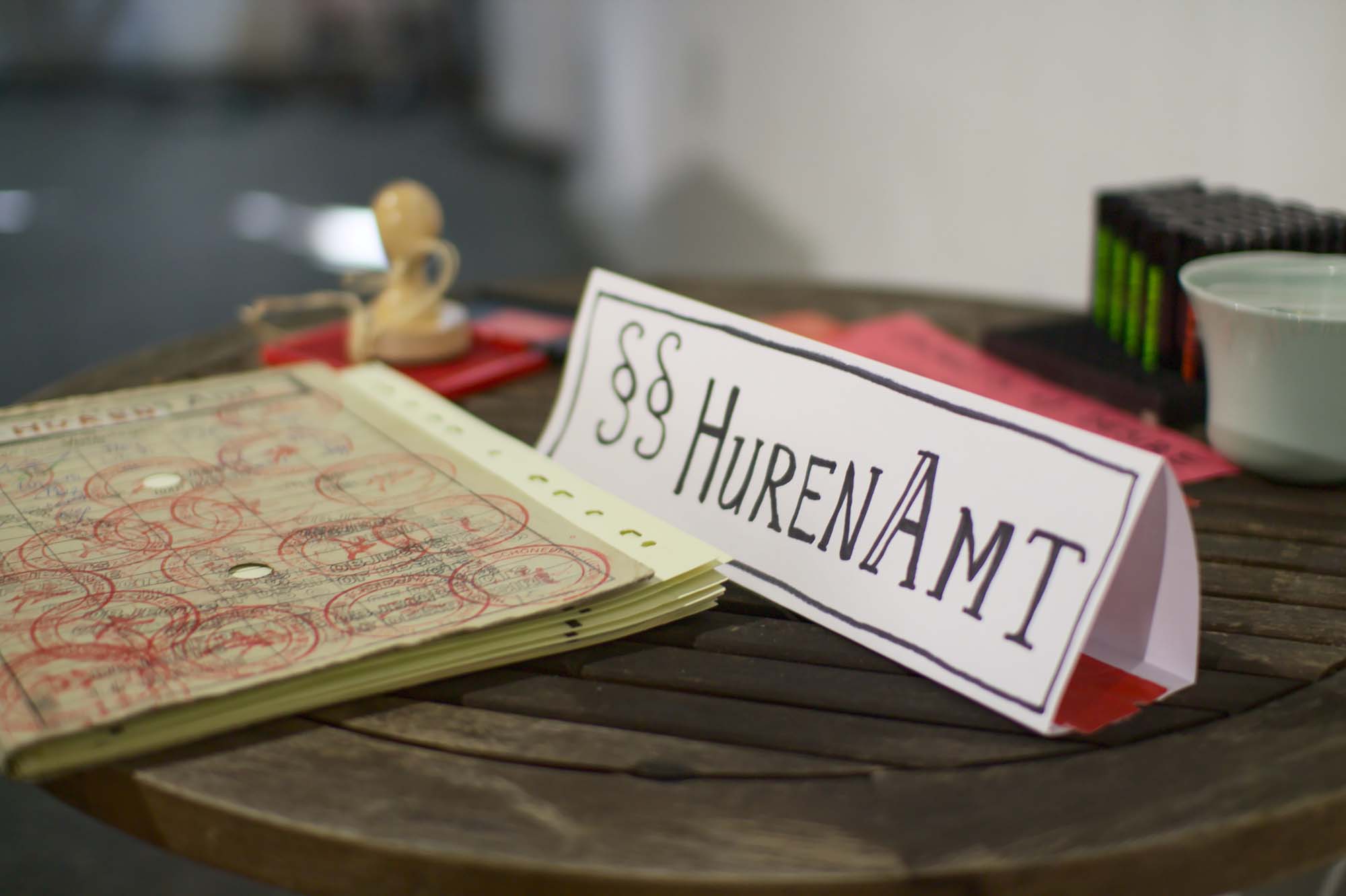 The 2017 Prostitutes Protection Act introduced a number of requirements for sex workers and brothels that are extremely hard to meet. The result: the majority of sex workers remain unregistered, and many small brothels were forced to close. This creates a two-tier system of legal and illegal prostitution.

With fewer brothels around, unregistered sex workers are often forced to work in isolation, which carries greater risk. Unable to rely on the support of the law or the state, unregistered sex workers are more vulnerable to exploitation. For these reasons, Germany’s sex work legalisation model is also referred to as ‘back door criminalisation’ by Juno Mac in her TED talk ‘ The Laws that Sex Workers Really Want’.

“A legal and decriminalised status for sex workers improves the labour rights of sex workers, decreases stigma and increases empowerment,” according to Lilli Erdbeermund. “It also makes it easier for trafficked persons in the sex business to seek help. Academics, human rights organisations such as Amnesty International, LGBTI+ organisations, sex workers’ associations, anti-trafficking organisations and United Nations cooperations such as WHO and UNAIDS have been documenting this publicly for years.”

World of Whorecraft aimed to challenge what people might think about sex work and to highlight some of the serious issues that sex workers face. By meeting sex workers, and learning about their political battles, it changed my opinion on sex work and made me feel differently about those involved. I think that means it worked. 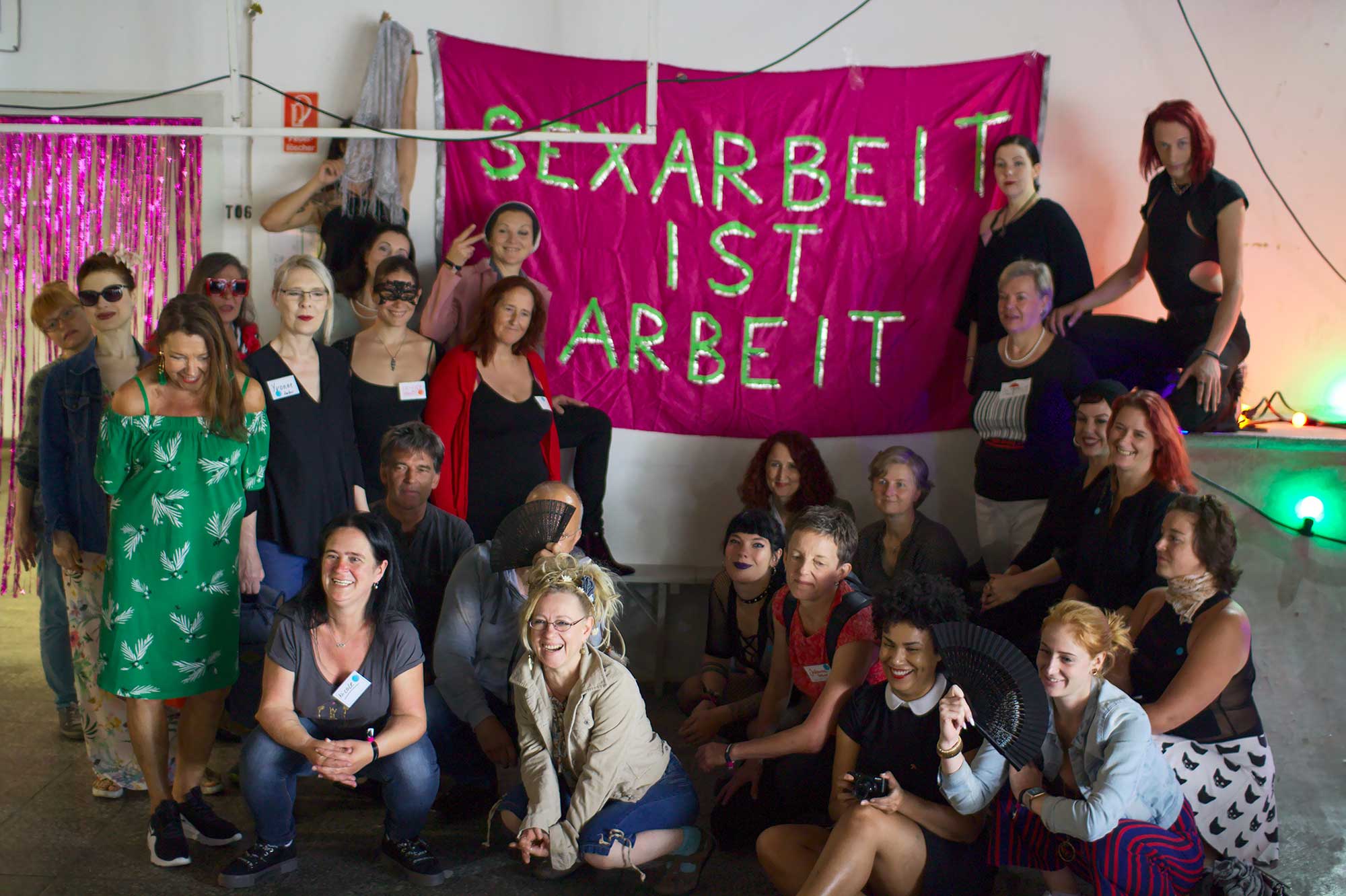