Scaling rooftops and riding trains to document the Berlin Kidz 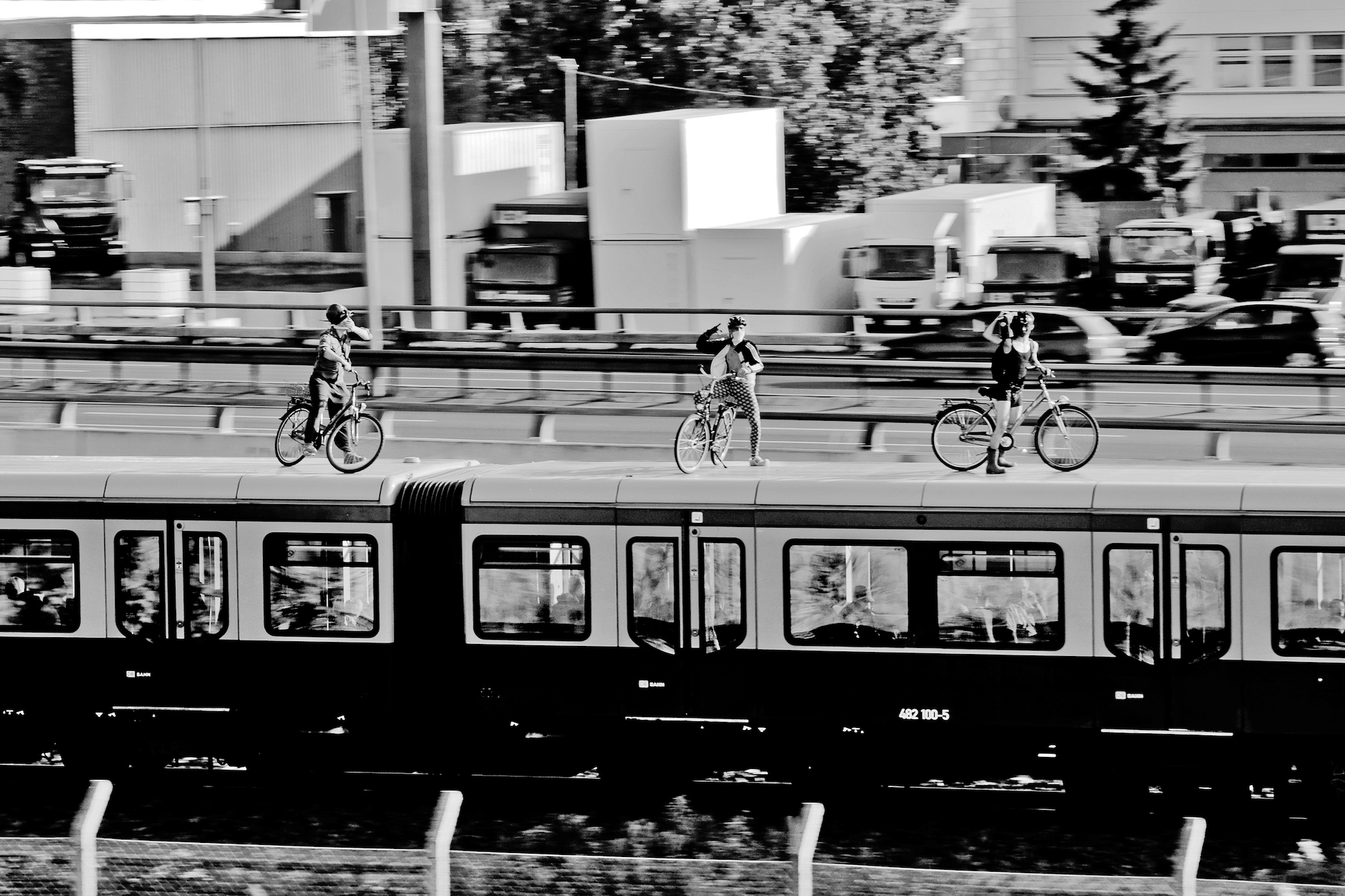 “Fun things usually happen when you leave your comfort zone,” says Thomas von Wittich as he recalls scaling rooftops and moving trains with the ‘Berlin Kidz’, the latest subjects of his adrenaline-fuelled photographs. In viewing Thomas’ work, we get a unique glimpse of Berlin’s street art as it’s being made, and get to experience the rush of what it’s like to be there scaling the walls with the pros.

To get the perfect shot, Thomas keeps one eye on the viewfinder and another on the easiest escape route, and in doing so he captures some of the most exciting scenes of our city in expressive black and white. Just before his aptly titled Adrenaline exhibition, we stole some precious daylight minutes with Thomas to learn more about how he got in with Berlin’s secretive graffiti crews. 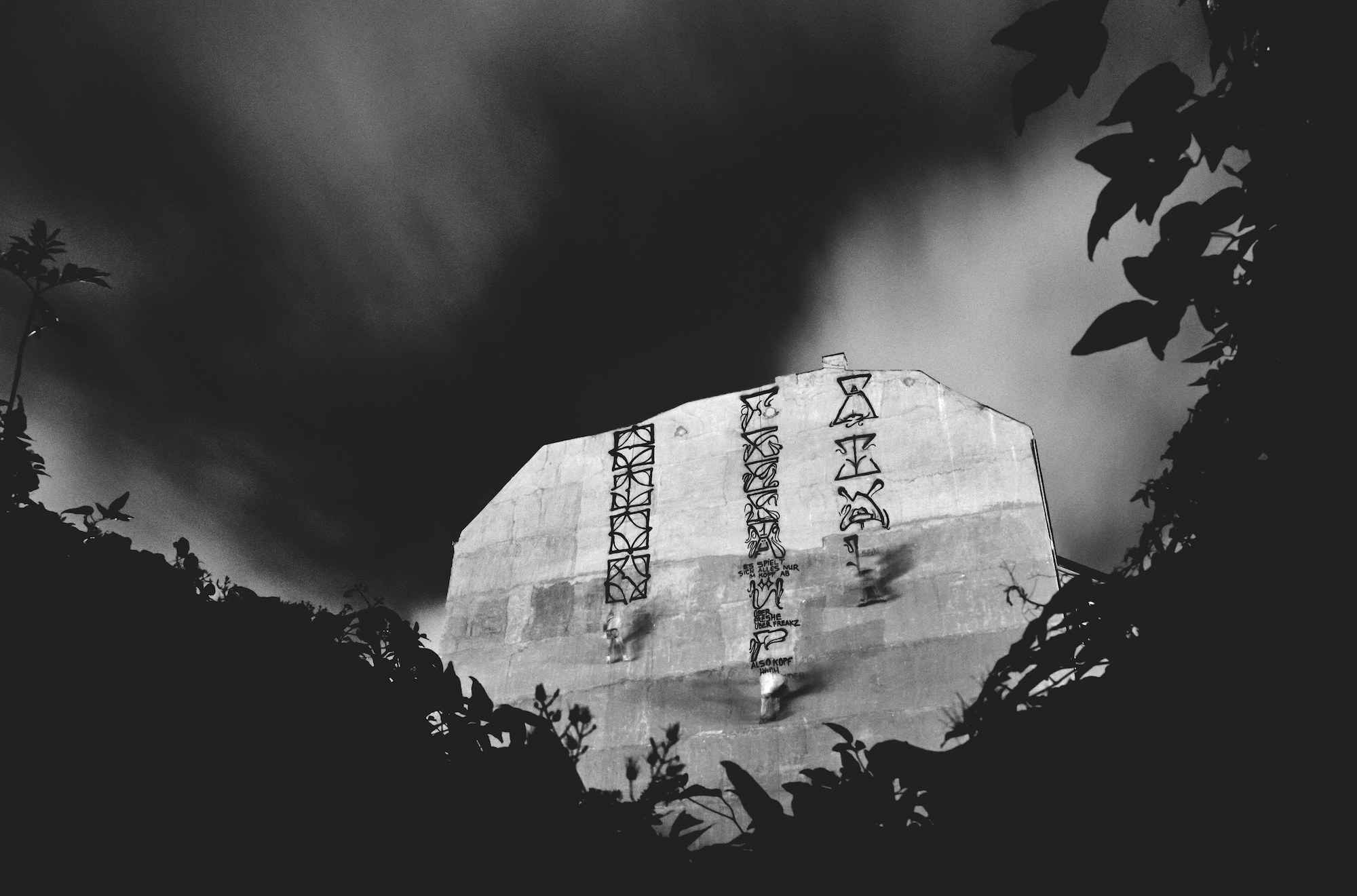 How did you get involved in Berlin’s street art scene? I left home quite early and had hundreds of different jobs to support myself while I spent my free time painting graffiti. I was a cook onboard a ship, I was loading trucks, I worked in the meatpacking industry, I worked in a company making chicken nuggets, I sold cameras, pumpkin seed oil, and ice-cream. Then I quit painting and started as an assistant to a music photographer who was working in the goth scene.

I spent three years in his studio or at concerts taking photos, and developing and printing in the darkroom. When I started to work as a photographer I was really just shooting rap artists, which turned out to be the reason I moved to Berlin, there was not too much happening in my hometown.

When I came to Berlin, I met Alias and some other street artists, and I decided to go out with them at night to take some photos of them painting. From that point on I started to shoot more street and graffiti artists and fewer musicians.

What do you feel is special about the scene in Berlin? The city appreciates urban art more than other cities, or at least its fighting less against it. On one side it’s easier to paint in Berlin than in other cities because of the freedoms, on the other side it’s harder because of the competition. I feel like people don’t really work together or support each other too much. 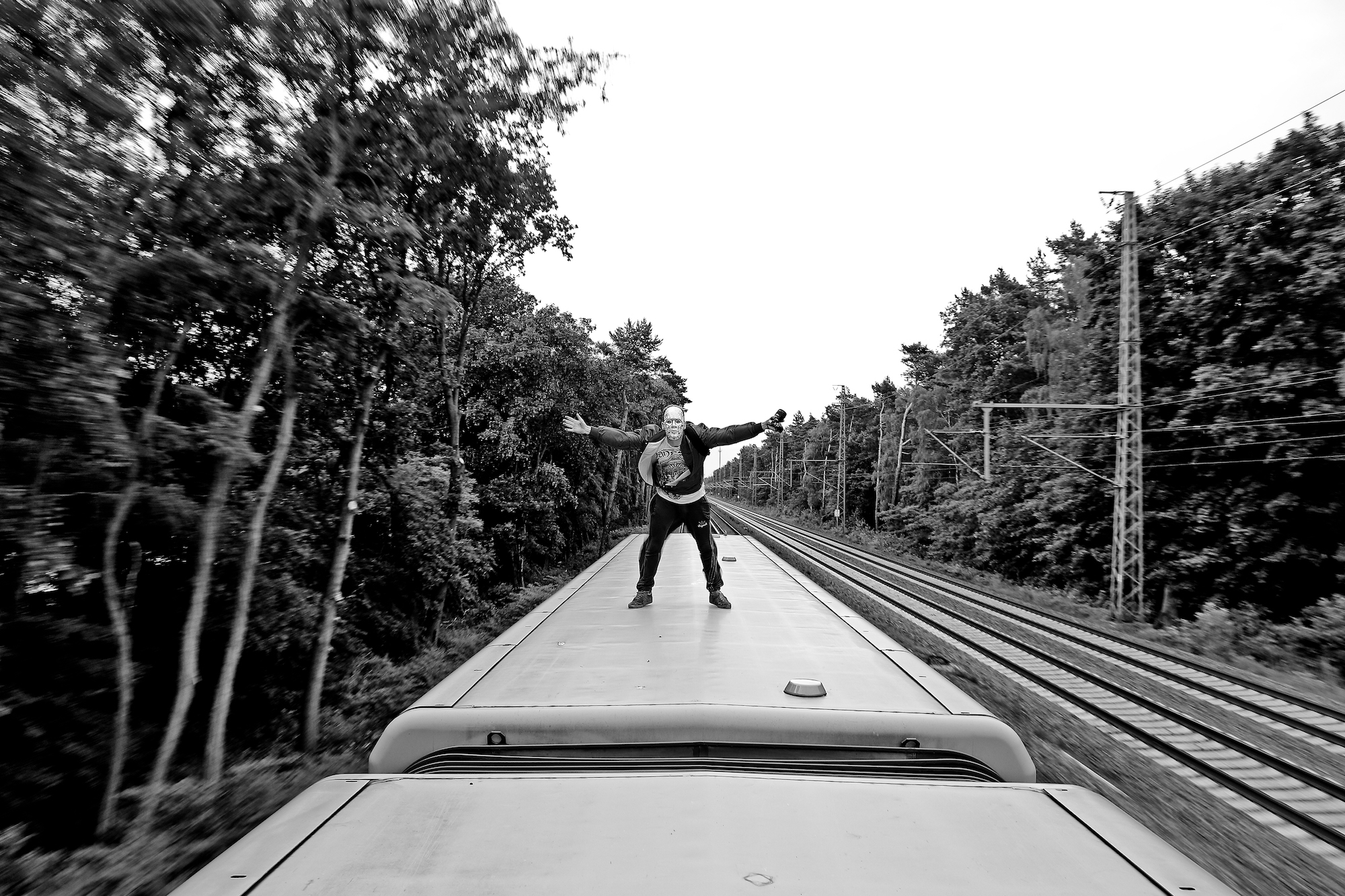 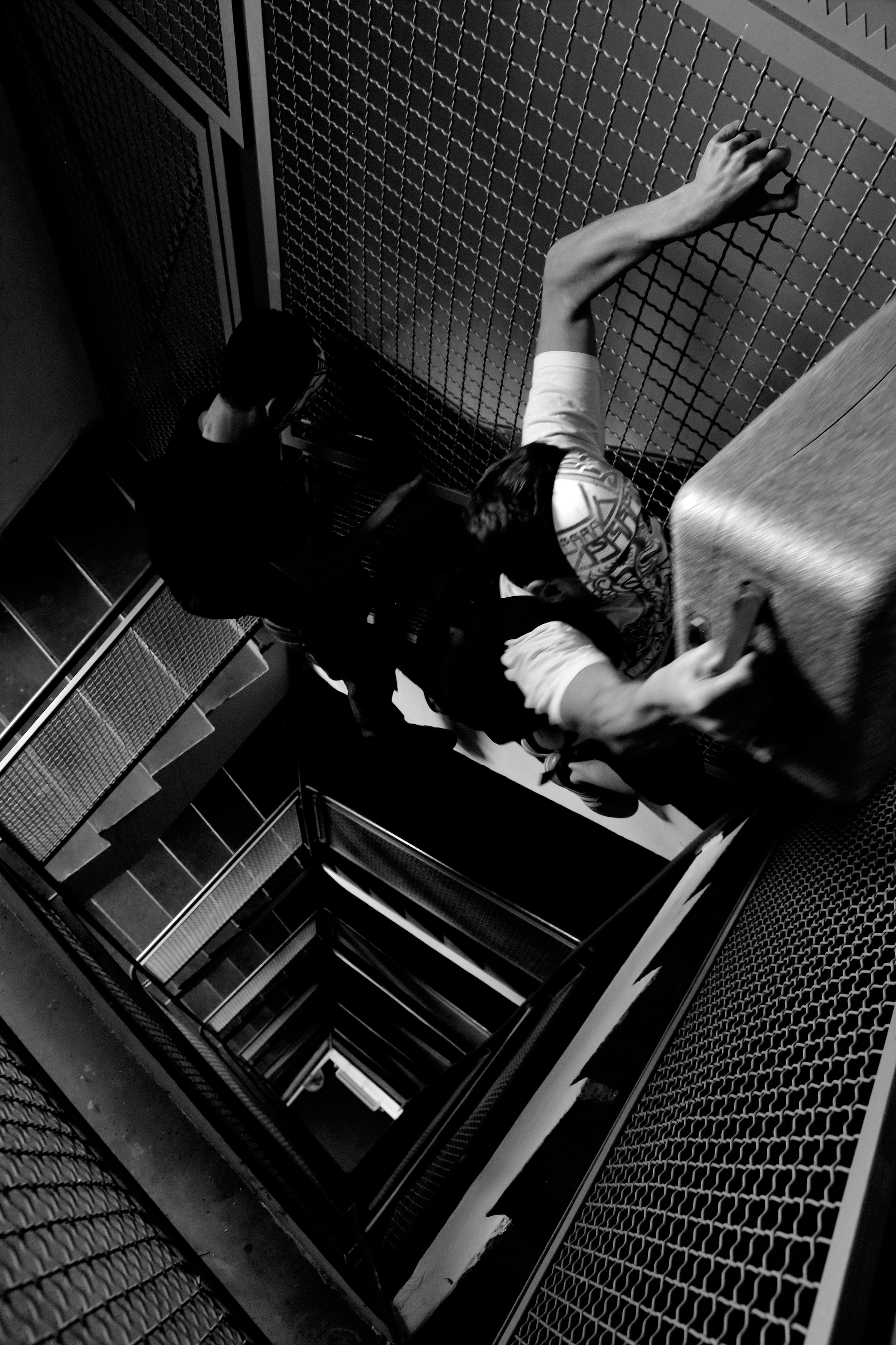 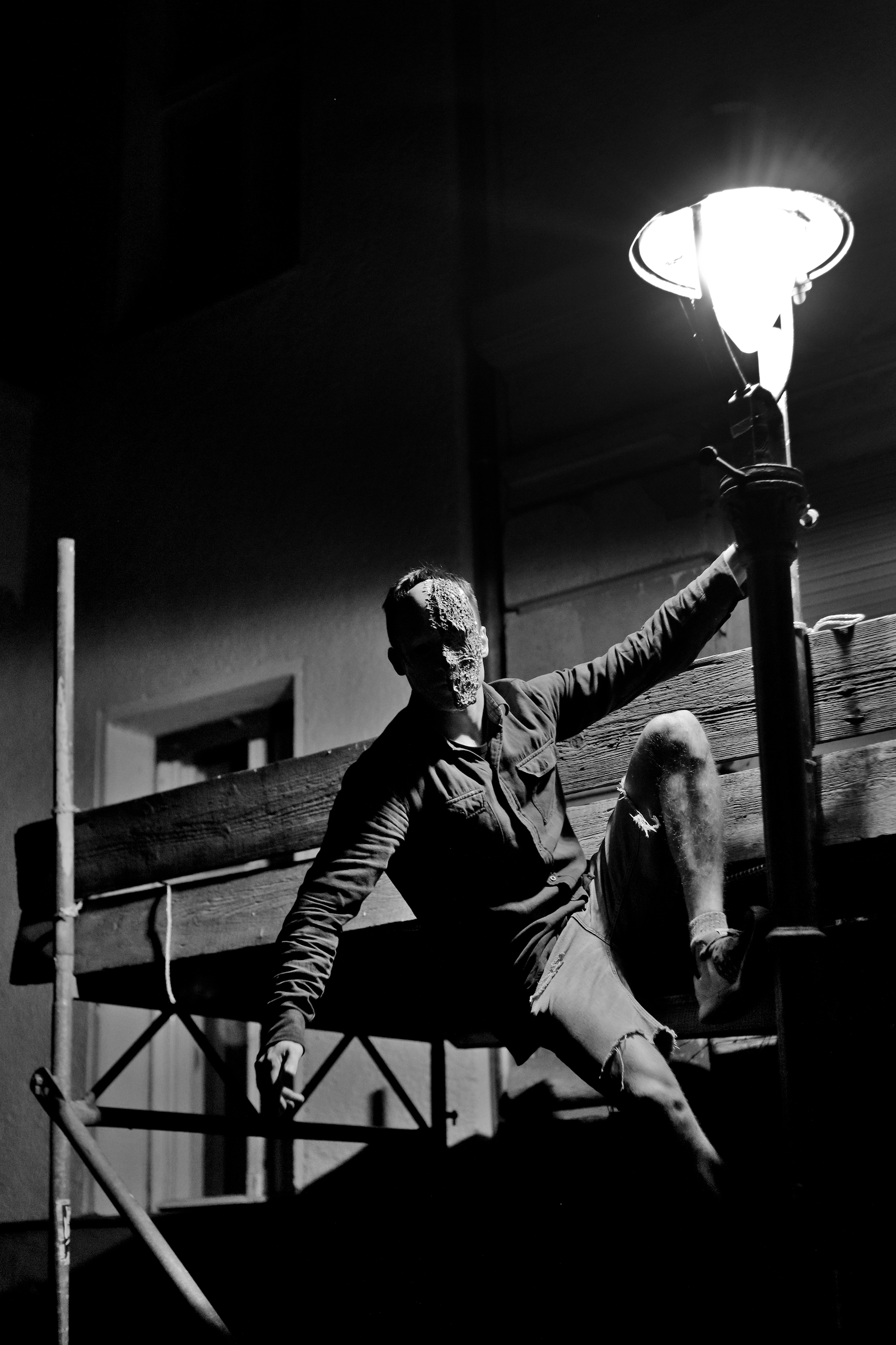 How did you gain access to the people you document? When I moved to Berlin eight years ago I was walking in Kreuzberg with a good friend I used to paint with and we saw some of the first Über Fresh (ÜF) rooftops. He said: “This looks like shit, but trust me, if they keep going, this will get interesting.” So I followed their career pretty much from the very beginning. Three years ago I tried to make contact but it took a few months before I found someone to introduce me. I went to shoot one action with them and told them that I would be very interested in following them with my camera, and a year later they called me back and said, “Ok, let’s go.”

The first action I took photos of after the call was when they painted the huge facade in the Cuvry Brache, directly After Blu let his famous artwork get painted black. Nobody told me before what was going to happen, we just met in front and they told me that they were going to repaint the wall. And that I would have to climb a bit.

We climbed ‘a bit’ over three pitched roofs while in the dark, rain and cold. It was my first time walking on a roof, so I followed them so slowly. When I finally arrived at the spot, it took like two Hours before they started to paint while I was just sitting in the rain waiting. The first thing they wrote on the wall was ‘FUCK YOU DU FOTZE’. At this point I was questioning the whole thing, like seriously? I was risking my life for that? Until I realised that an investor wanted to build luxury apartments with the view of Berlin’s famous graffiti – the Blu artwork – so they wanted to make a statement and painted a huge middle finger for him.

The longer I followed them with my camera, the more comfortable I became with on the roofs, and when we went on the same roof some months later I could walk and take photos in the same time. Did you have to work hard to gain their trust? They document pretty much everything they do by themselves so it was nothing really new to them, except for the fact that I was taking photos instead of filming. I got introduced by a mutual friend and I think in general I have the image of being trustworthy. But I had to prove somehow that I was fit enough to follow them over the roofs, so I am not a risk for them.

We’ve read that you are pretty fearless in chasing the perfect shot. Have you ever put yourself in danger when shooting? I wouldn’t describe myself as fearless, I just do what I think is necessary to get the shot I want. I don’t really feel that I put myself in danger, but that is relative. They estimated my fitness very well and told me before whether i’d be able to manage it, something I knew that I could trust them on.

Who do you think are the best street artists working in Berlin right now? I don’t really see it as a competition, and urban art is in general a wide field, so I don’t want to point out people saying they are the best. But I like LES MISERABLES a lot. 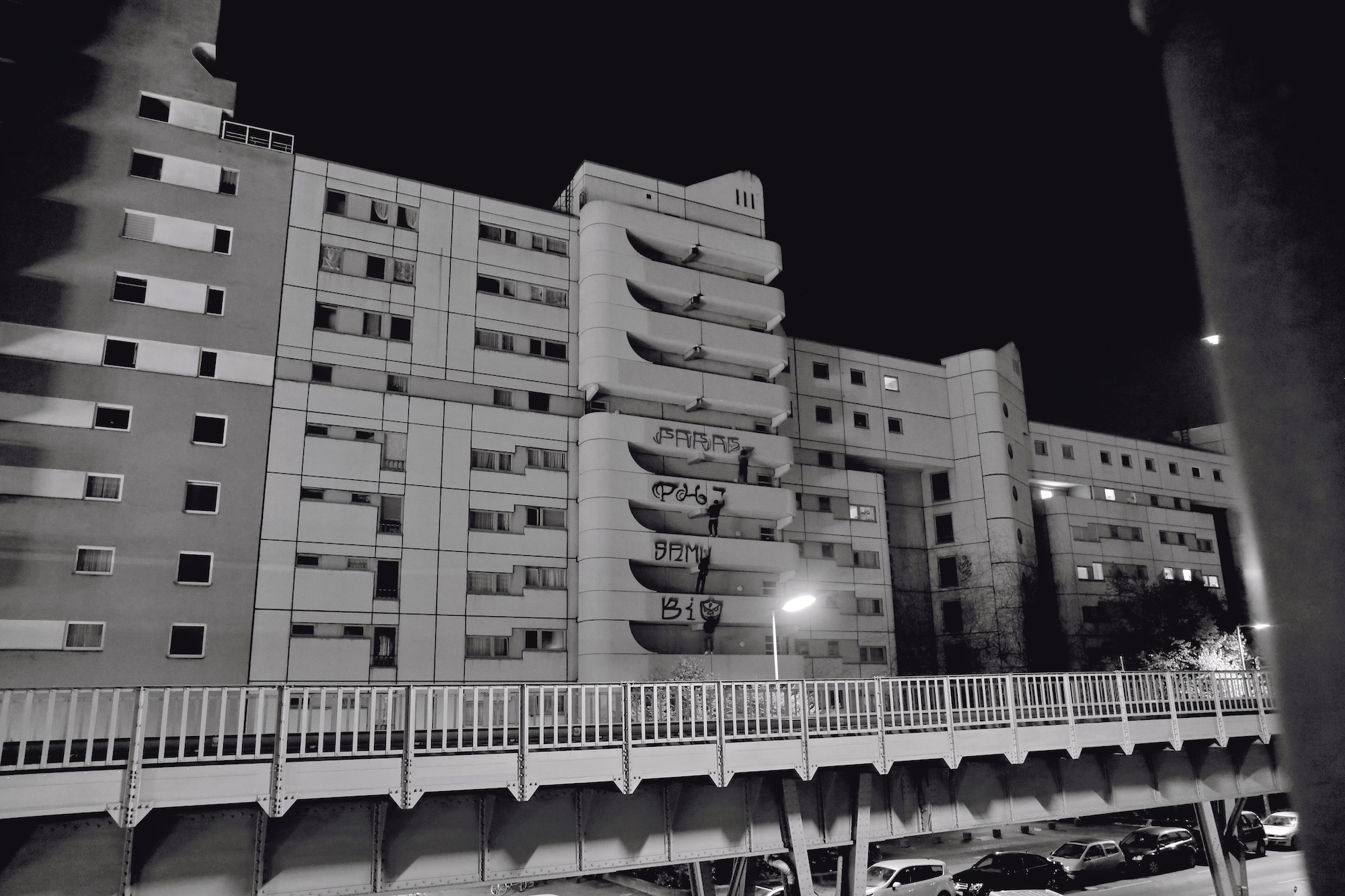 Why do you choose to shoot your photos in black and white instead of colour? I never did anything else. I started to work as a black and white photographer 12 years ago and I never felt the need to change. When I shoot urban artists, I’m not interested in the final colourful artwork in the streets, there are plenty of photographers and usually the artists themselves taking care of documenting the work. I want to show the atmosphere and the circumstances of how it was created. I want to show the process and the artists – things you usually don’t see. For me that works very well in black and white.

Have you always been attracted to subcultures, or is it this specific moment in street art that interests you? I have always been attracted to culture in general. But I grew up with graffiti, it’s what I know, what I like and what I completely understand. And I am really fascinated by the effort people put into creating their art. Some actions are planned out like bank robberies, but in the end it’s just to bring some colour to the city. 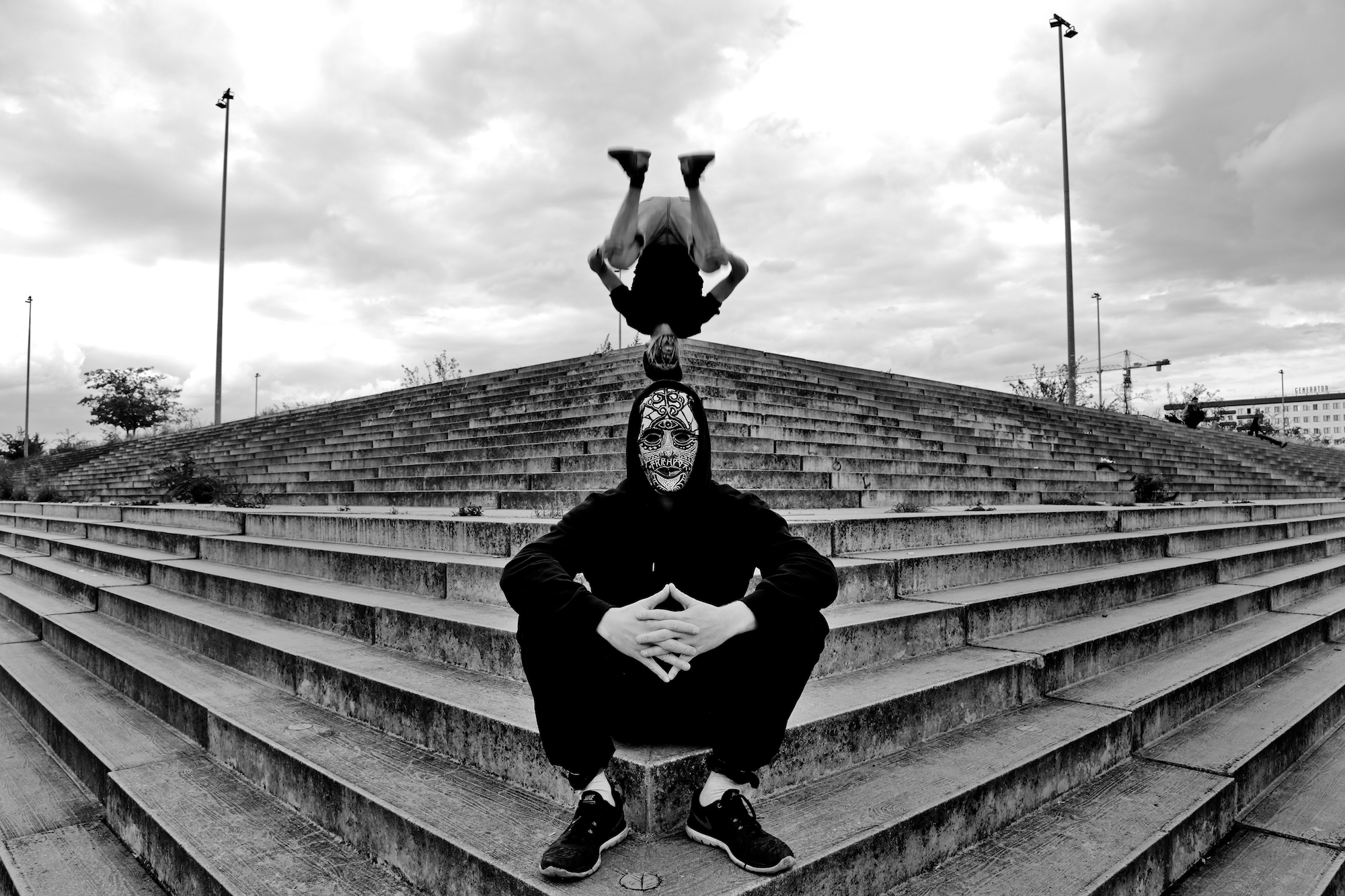 Do you have any new projects in the works? I’m for sure gonna continue to document urban artists, but at the same time I don’t want to plan too much. I started two new series in the last four years which are both unreleased and very far removed from what I was doing before. I might just experiment with that for a bit.

Be the first to see Thomas’ latest late-night adventures by following him on Facebook. 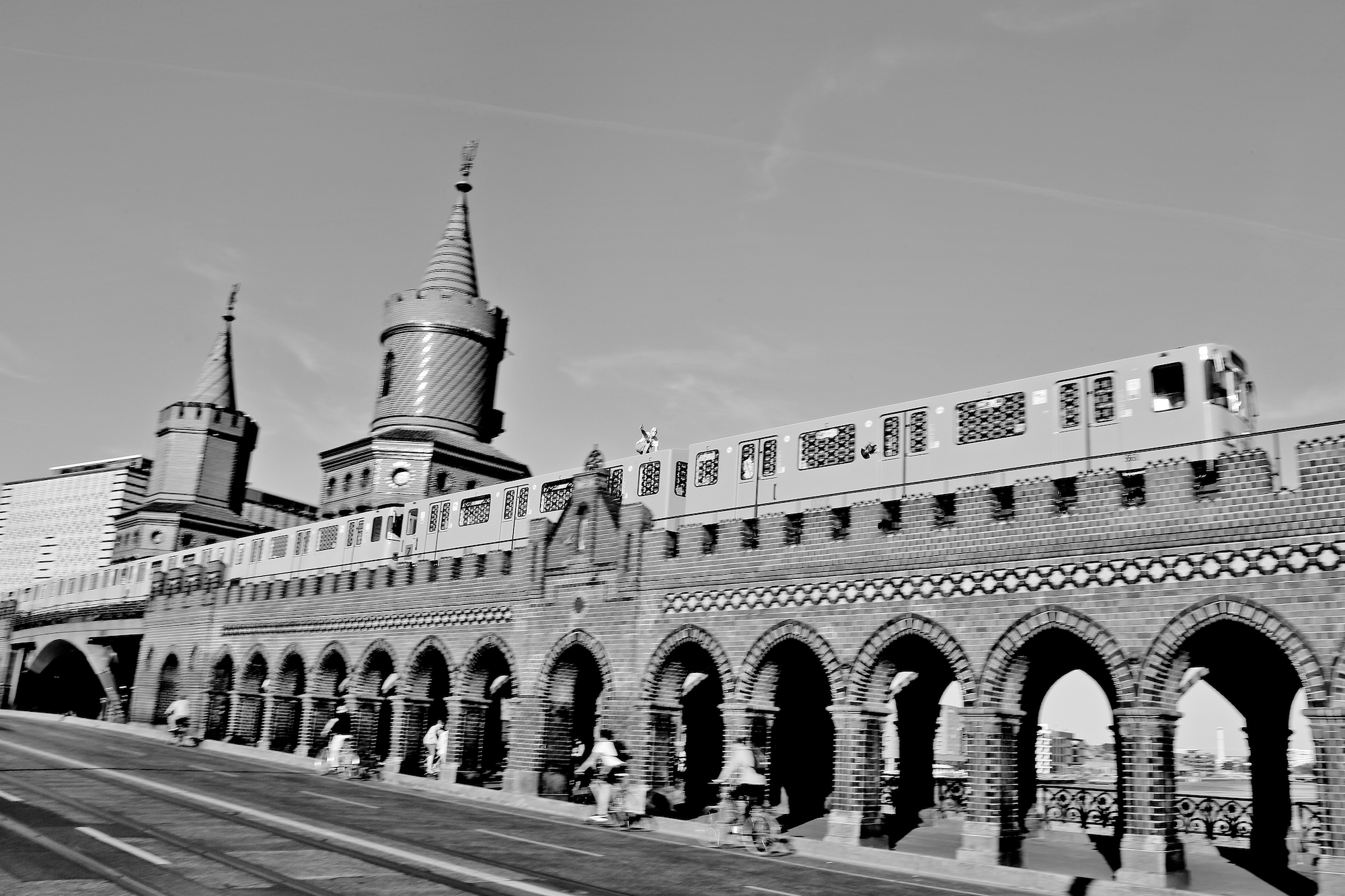