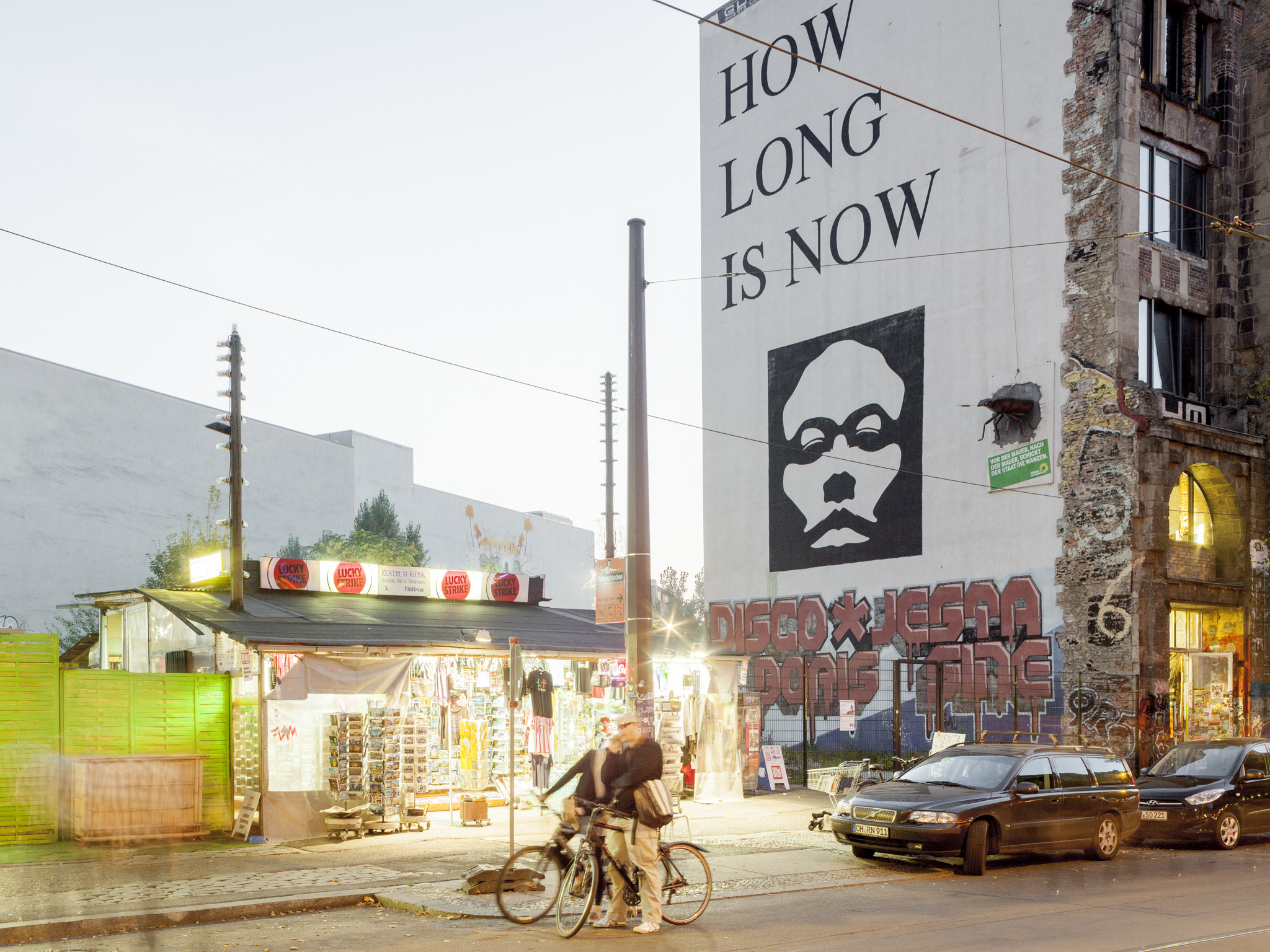 Peter Bialobrzeski is a long-time photographer and photography teacher originally from West Germany. Famous for his portraiture of cities in his City Diaries series, Peter has mastered the art of capturing the unusual, the unfiltered, and the everyday through his lens. Best known for his documentation of Asian cities in Neon Tigers, Peter manages to portray both the sprawling immensity of a city’s skyline and the individual quirks, alleyways, and moments that animate each space.

Peter’s relationship with each city he photographs is different, but he has a particularly interesting relationship with Berlin. He has seen this city grow and evolve, sometimes in ways he isn’t exactly enthused by. Although he hasn’t photographed a complete diary on Berlin, Peter incorporated some photos of the city into his project Die Zweite Heimat. We were lucky enough to get access to some of the unreleased pictures from his shoots, which show the city as disparate yet whole, large yet intimate, and constantly evolving.

Your City Diaries series have been published and exhibited countless times and have achieved worldwide acclaim. What inspired the series?
The idea for my Diaries was born during a trip to Bangladesh, where I was invited to a photo festival. I did a Google search for photos of the city in advance and was incredibly surprised that there were only two kinds of images: saturated photos of tourist sites or black and white pictures of poor people on the streets. So, basically, it is a reaction to this limited presentation of the world. 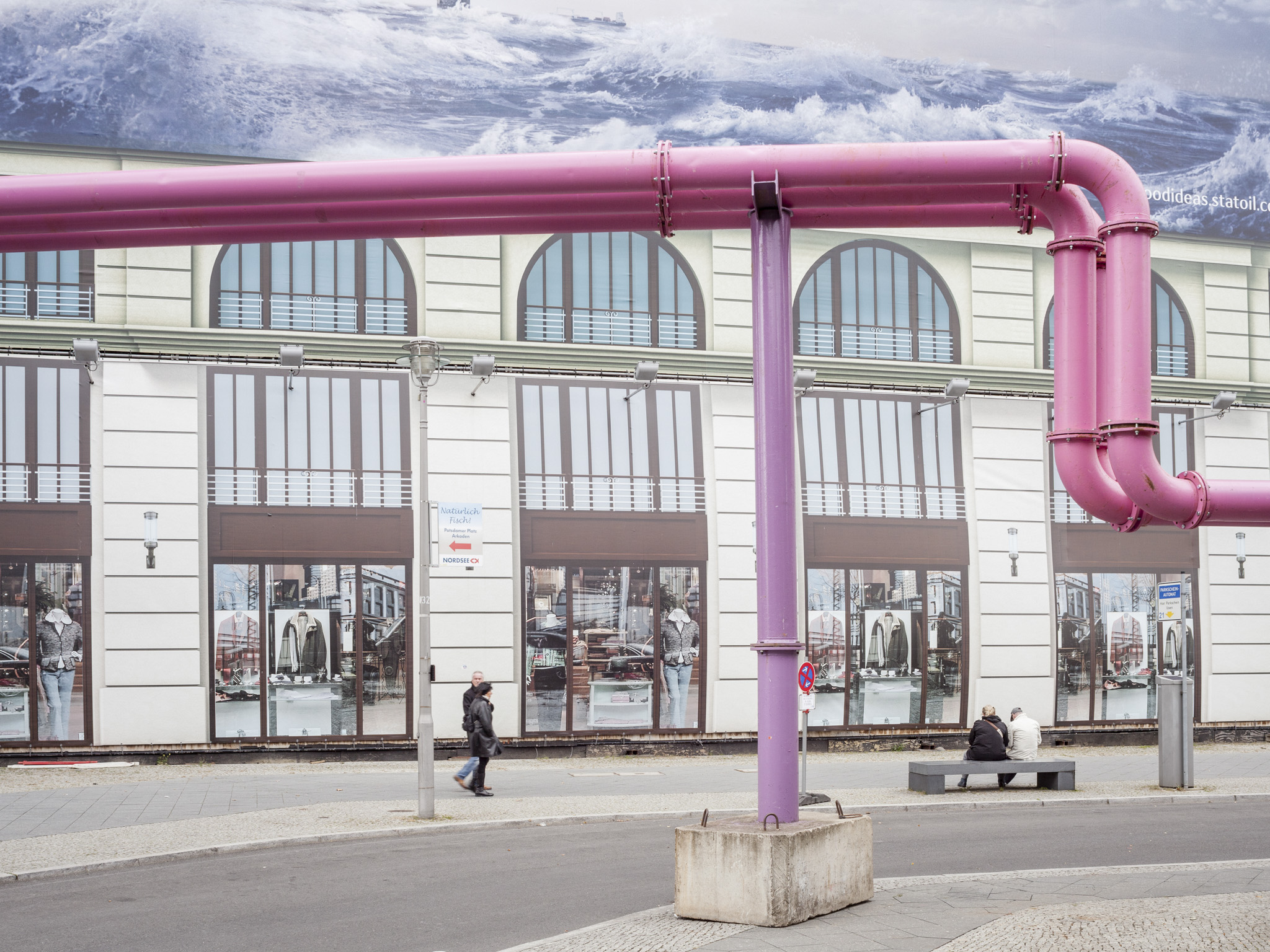 I was specifically looking for images that show change in the city.

How do you choose the cities you travel to?
I have to be able to move freely, to be able to just run off to take pictures. Surprisingly, it’s much easier to take photos in towns. Places like Wuhan, China, for example, are full of surveillance and cameras, so you can go almost anywhere and nobody cares. In China, I often went onto construction sites and would pretend to be official. I would go up the lift to the roof with the construction workers, hoping that the door wouldn’t suddenly close again. In cities like New York or London, something like that would never be possible.

In this feature, you show some previously unpublished photos that you took in Berlin. When and why did you take them?
When I started my project Die Zweite Heimat in 2011, I knew that I would also need to go to Berlin for it. I lived on Tucholskystraße for a week and then I started to explore places in Mitte and Prenzlauer Berg. I was specifically looking for images that show change in the city. I didn’t look at the photos for about half a year before I edited them for the first time. 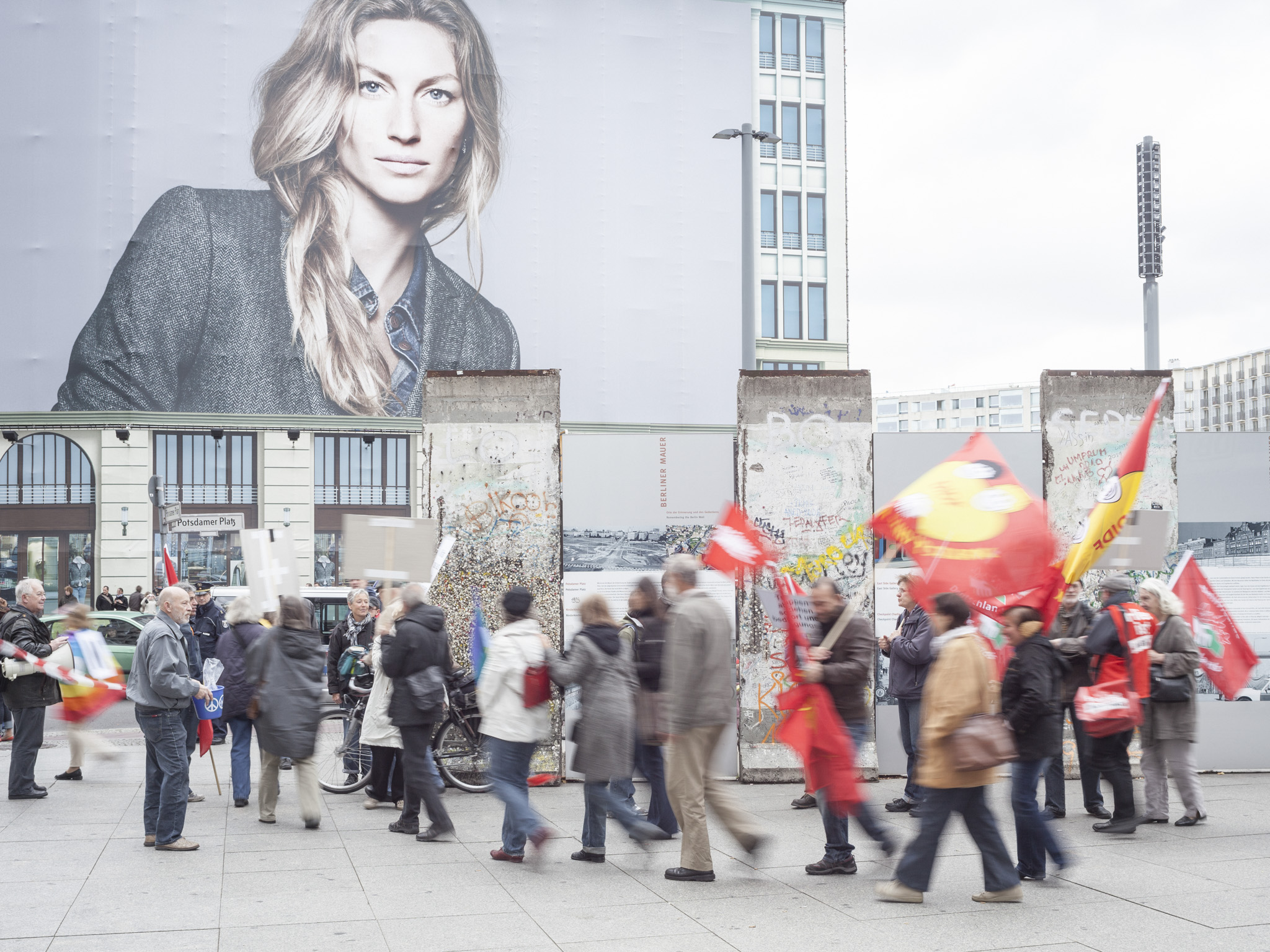 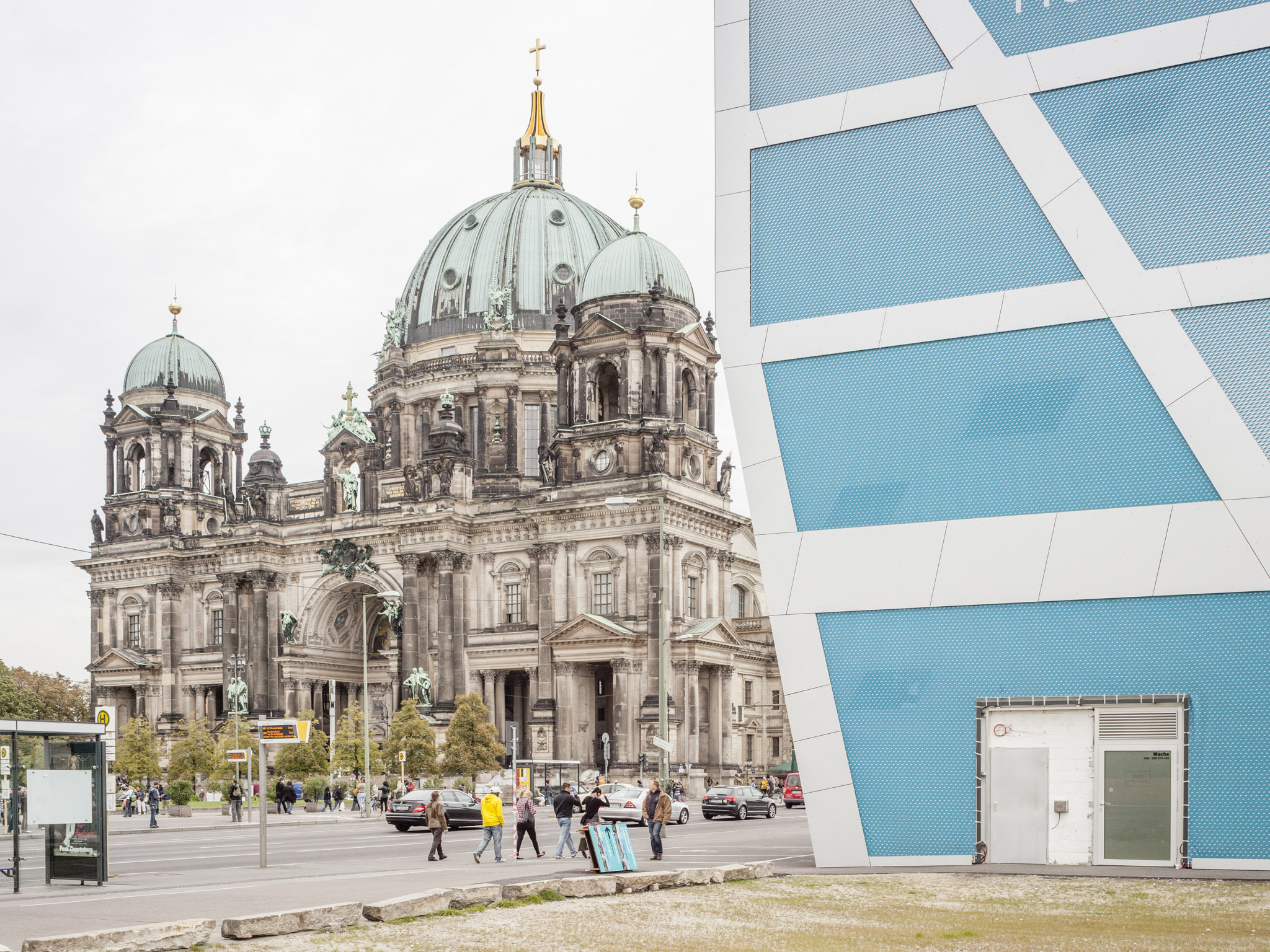 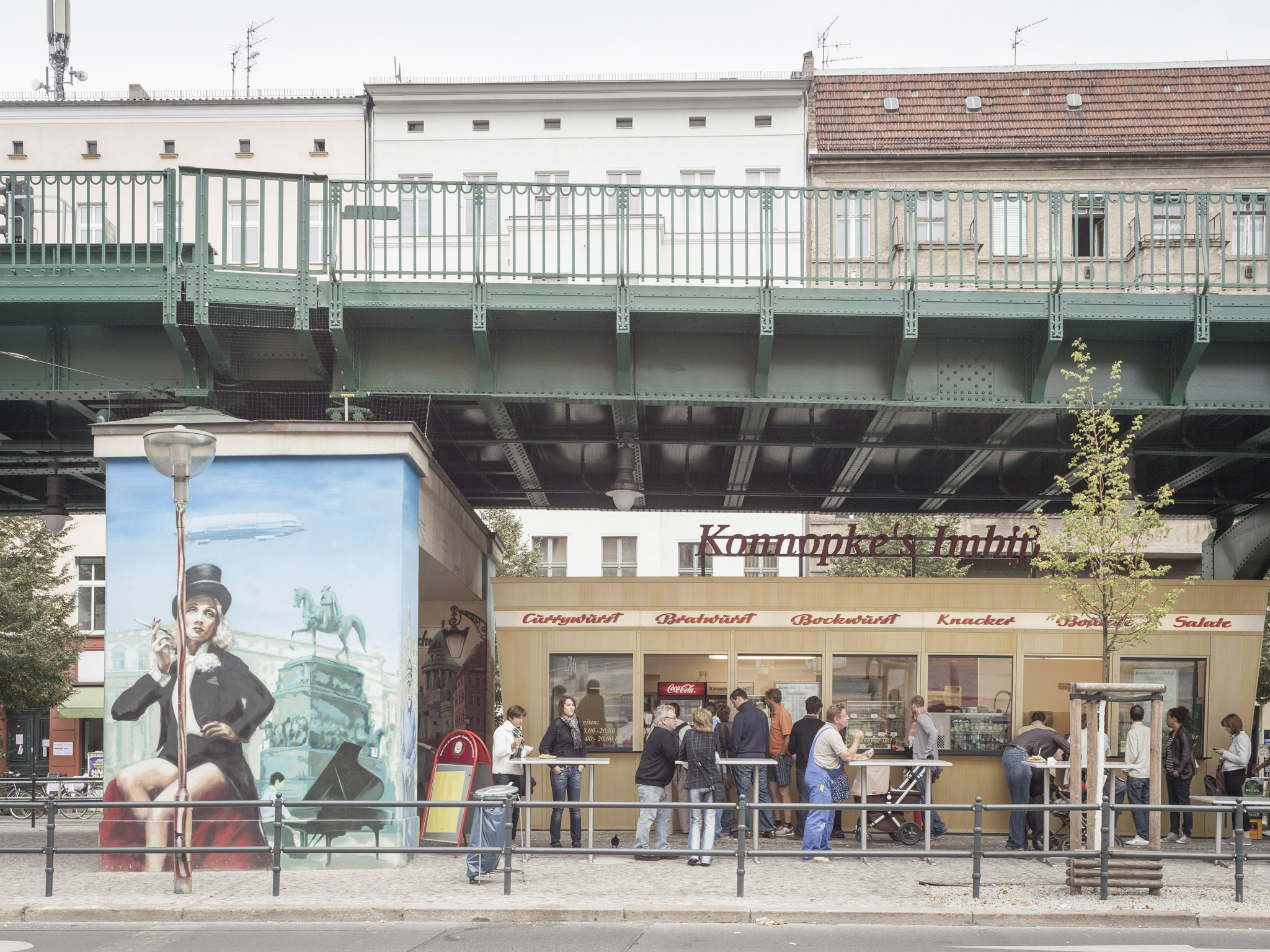 What is your relationship with Berlin?
I am often in Berlin because that’s where my girlfriend Natascha lives. It’s hard not to like Berlin. On the other hand, I have to say that I like Hamburg more, maybe because I’m a bit older and Hamburg accommodates me with its public spirit. Nobody in Berlin gives a shit about anything. The tone is generally friendlier in Hamburg.

From your perspective, how has the city changed?
I know quite a few Berlins. When I graduated from high school, the Wall still existed and many of my friends moved to military-free Berlin to escape the Bundeswehr. They lived in some 100 DM flats with coal stoves in what were then grey districts, like Kreuzberg or Moabit. That was David Bowie’s ‘Heroes’ Berlin. The next Berlin was my sister’s, who studied medicine and lived in a villa in Westend. Then came the fall of the Wall when we regularly went to pubs in the East and paid with Ostmark. Then friends of mine moved to Mitte, and that was the new place. Yes, a lot has changed!

What do you think of the changes to Berlin?
Berlin has changed significantly for the worse. The city is no longer open to everyone – not everyone can afford a flat anymore, but there’s nothing you can do about it. Berlin simply used to have an enormous vacancy rate, so there were cheap flats and experimental rooms. 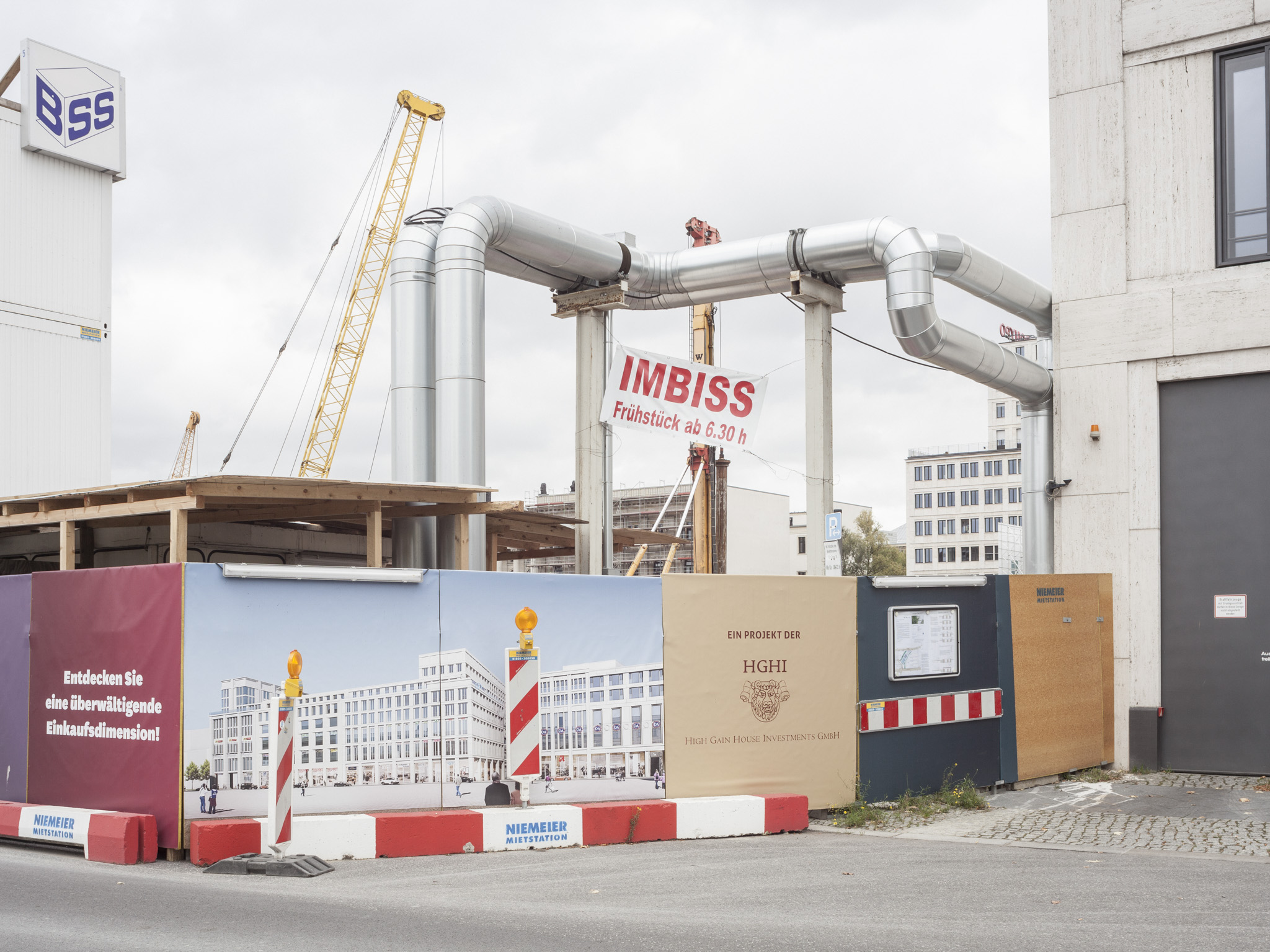 What is your process when you shoot?
I go out for an hour in the morning and in the evening in order to always have the same lighting conditions. I work like a scanner. First, I walk in the area around my hotel and take photos, then I expand the area. Sometimes people also give me tips on where to go. I don’t observe for very long before I take the first pictures; after thirty seconds, I set up the tripod and start taking photos.

Your photos look like they were taken with a large-format camera. Can you discuss your technique?
I used to take photos with large-format cameras, but now I’ve switched entirely to digital. I made most of the images with a full-format SLR and a shift lens. When I was in Shanghai some years ago, I did a test and compared two images taken with a large-format camera and a 35mm DSLR. I showed the results to different people and let them guess which camera each photo came from. Many of them were completely wrong, so I permanently switched to digital shortly thereafter. My Diaries wouldn’t have been possible otherwise. In the pre-digital age I used to research precisely where to take photos and at what time, and then would have to come back the next day.

Documentary photography has also changed. Can you still advise photography students to study photography with a good conscience?
Yes, of course! But I ask at every student advisory service: can you do anything else besides photography? If the answer is yes, then the interview is over for me. And even then, getting into photography is only possible if you don’t have to feed a family. It has always been difficult to earn money with photography. Even Andreas Gursky once said that he never thought he could make a living from it. 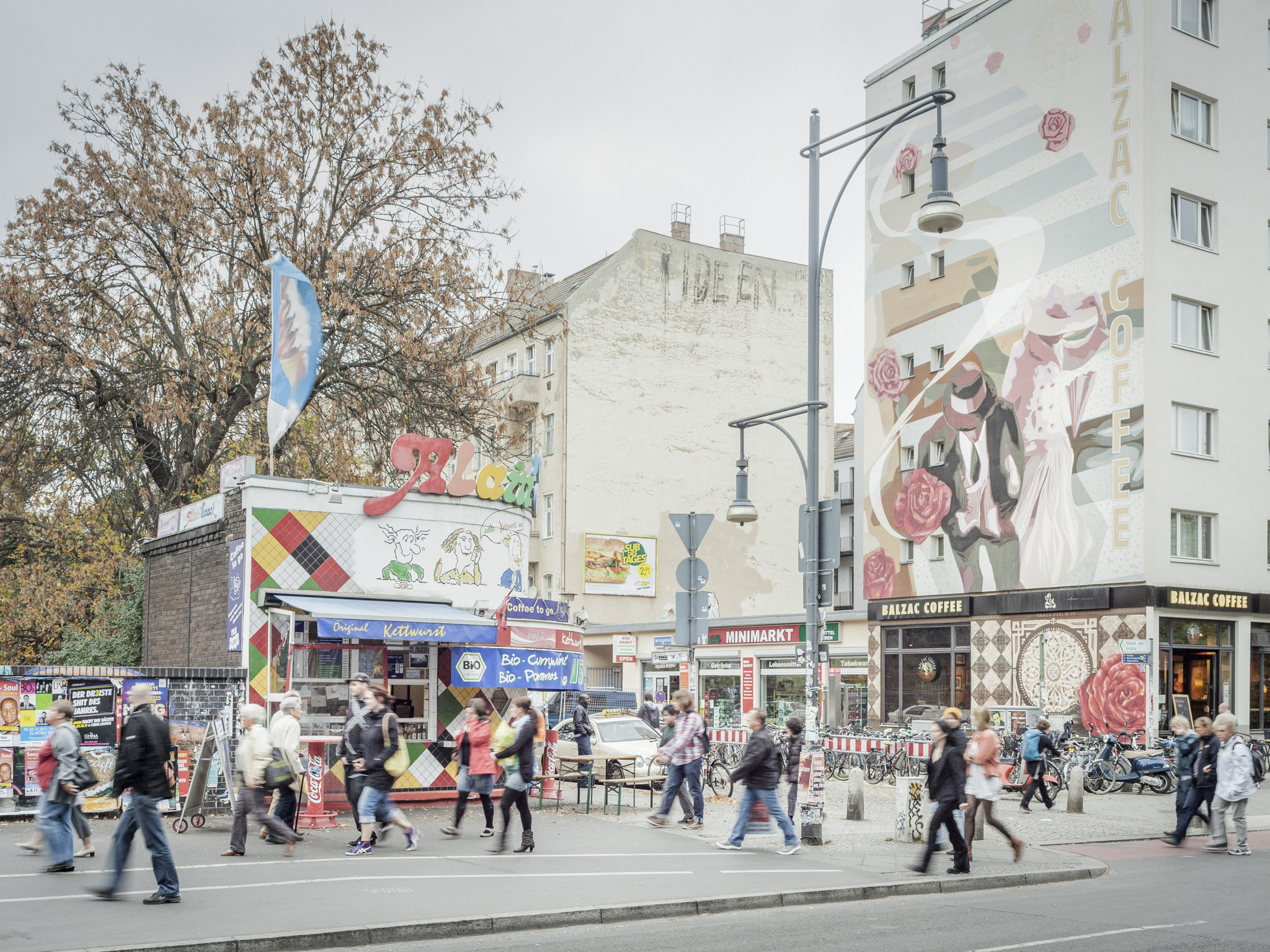 Documentary photography has always been something that shows us how it is. 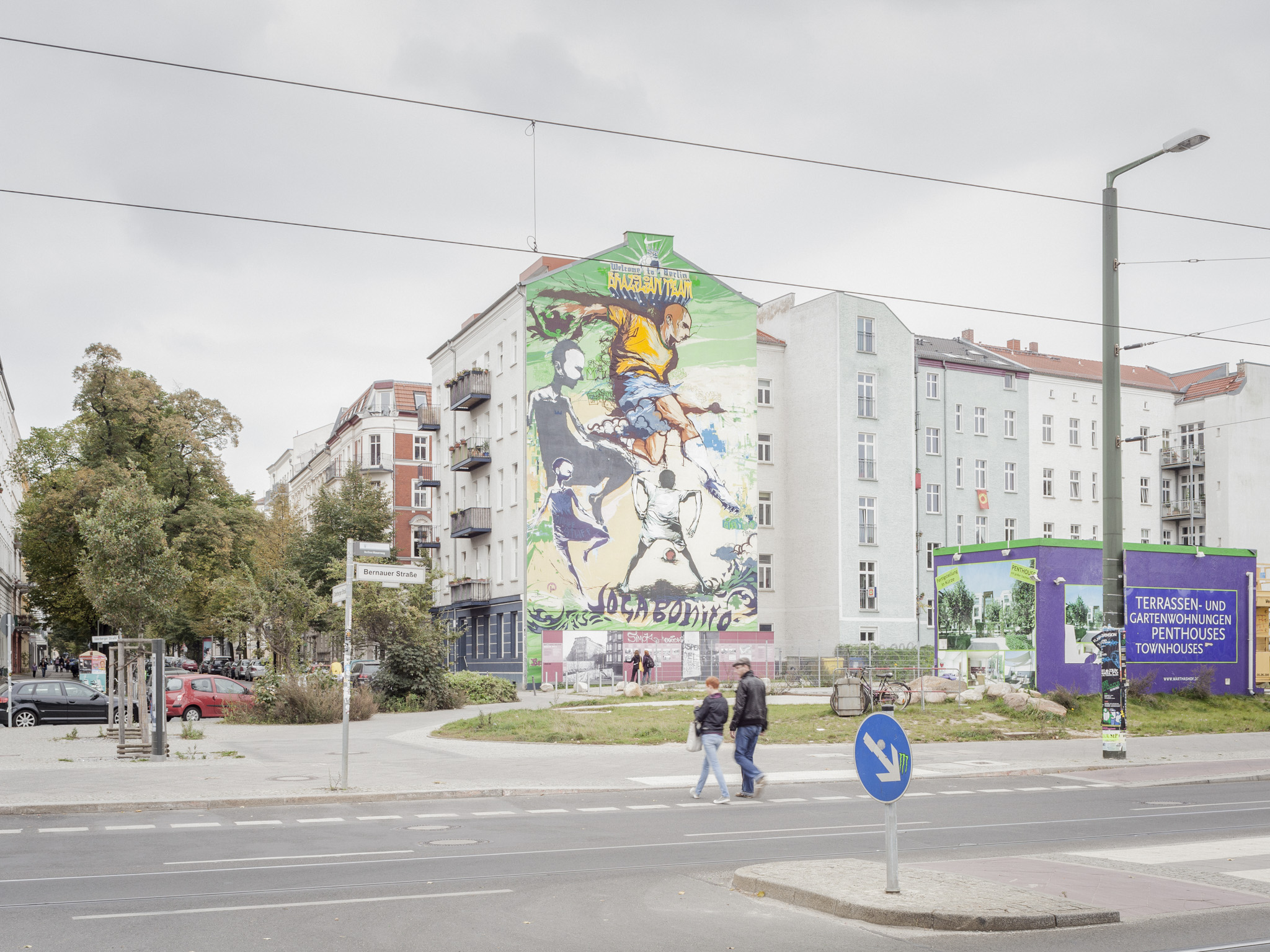 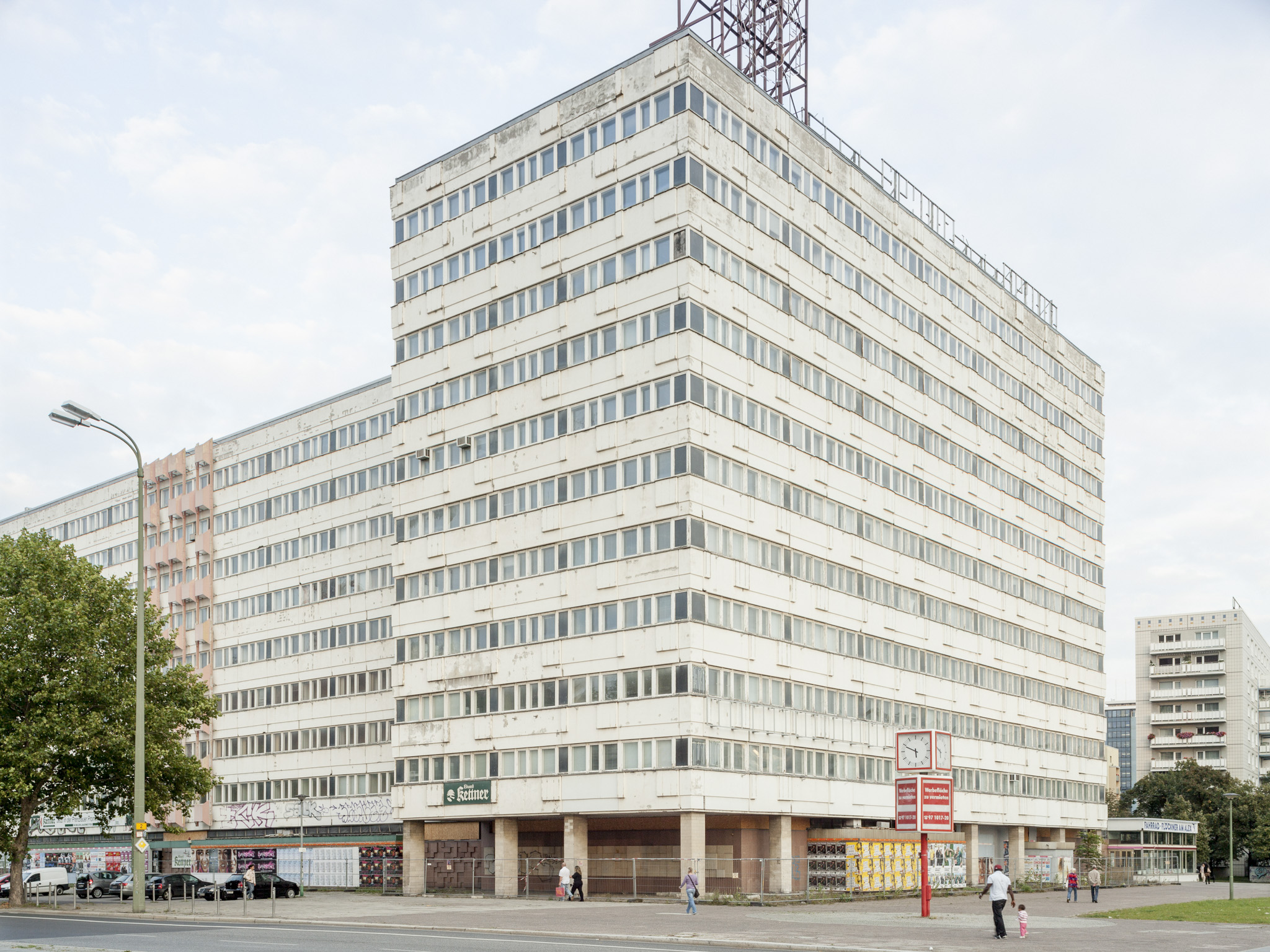 How do you feel about the increasing ability to manipulate everything with AI? How will this affect documentary photography?
Documentary photography has always been something that shows us how it is. Things that were taken for granted in the past are frowned upon today. In the past, GEO used to print underexposed photos, which we now find terrible. These strategies and techniques have always been subjective, but also tell us a lot about the world back then. If you look at it now, 30 years later, it has enormous validity. And it will be the same with AI. If you look at the paintings of the 18th and 19th centuries, they often showed fantasy worlds but they also had their origins in reality.

How has COVID-19 affected your practice?
Due to the pandemic, countless workshops I was supposed to give were cancelled. But I can’t complain at all, I have many projects.

Learn more about Peter and his work here. 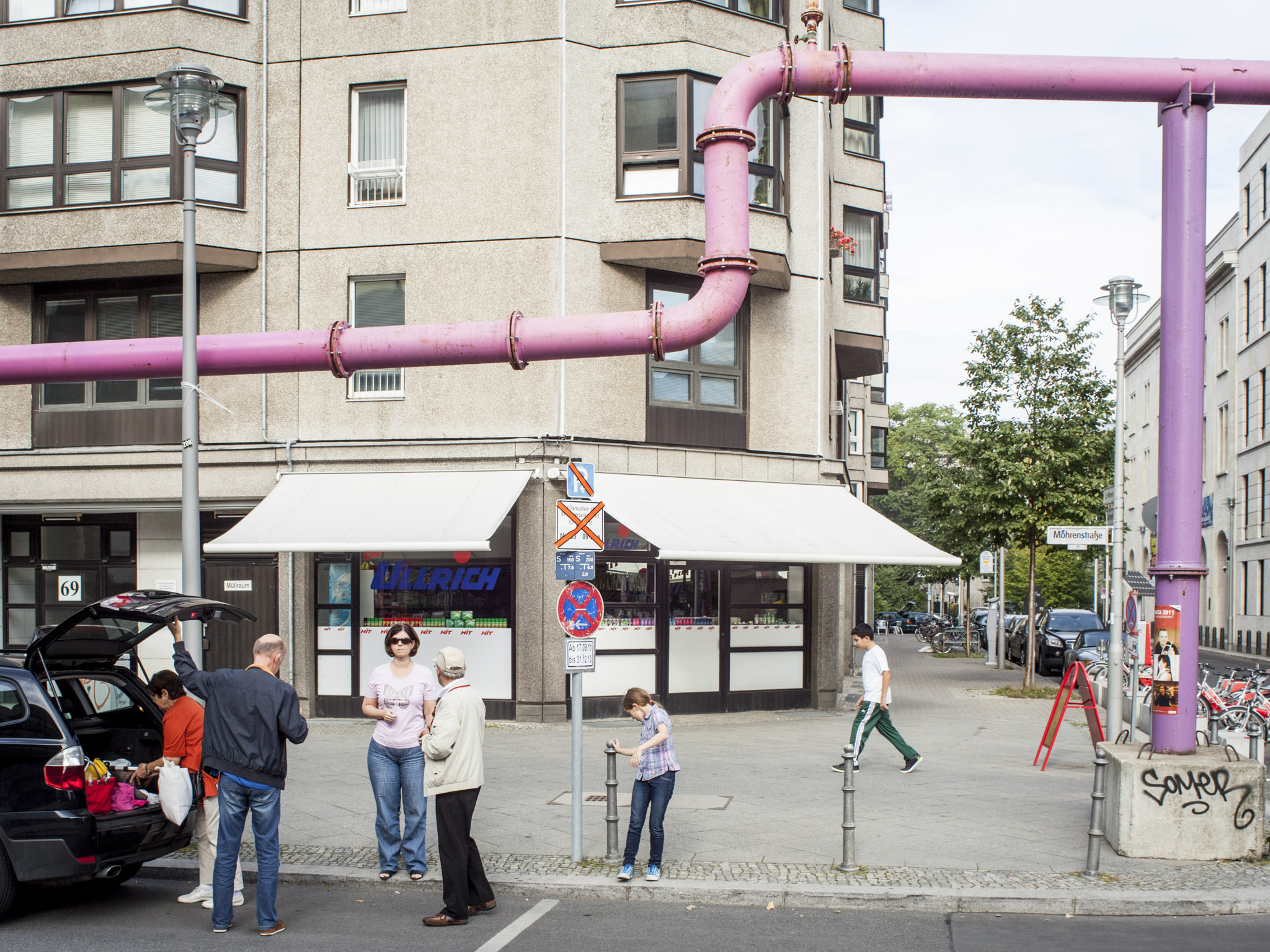