Otto Umbehr: The Unconventional Photographer of the Avant-Garde 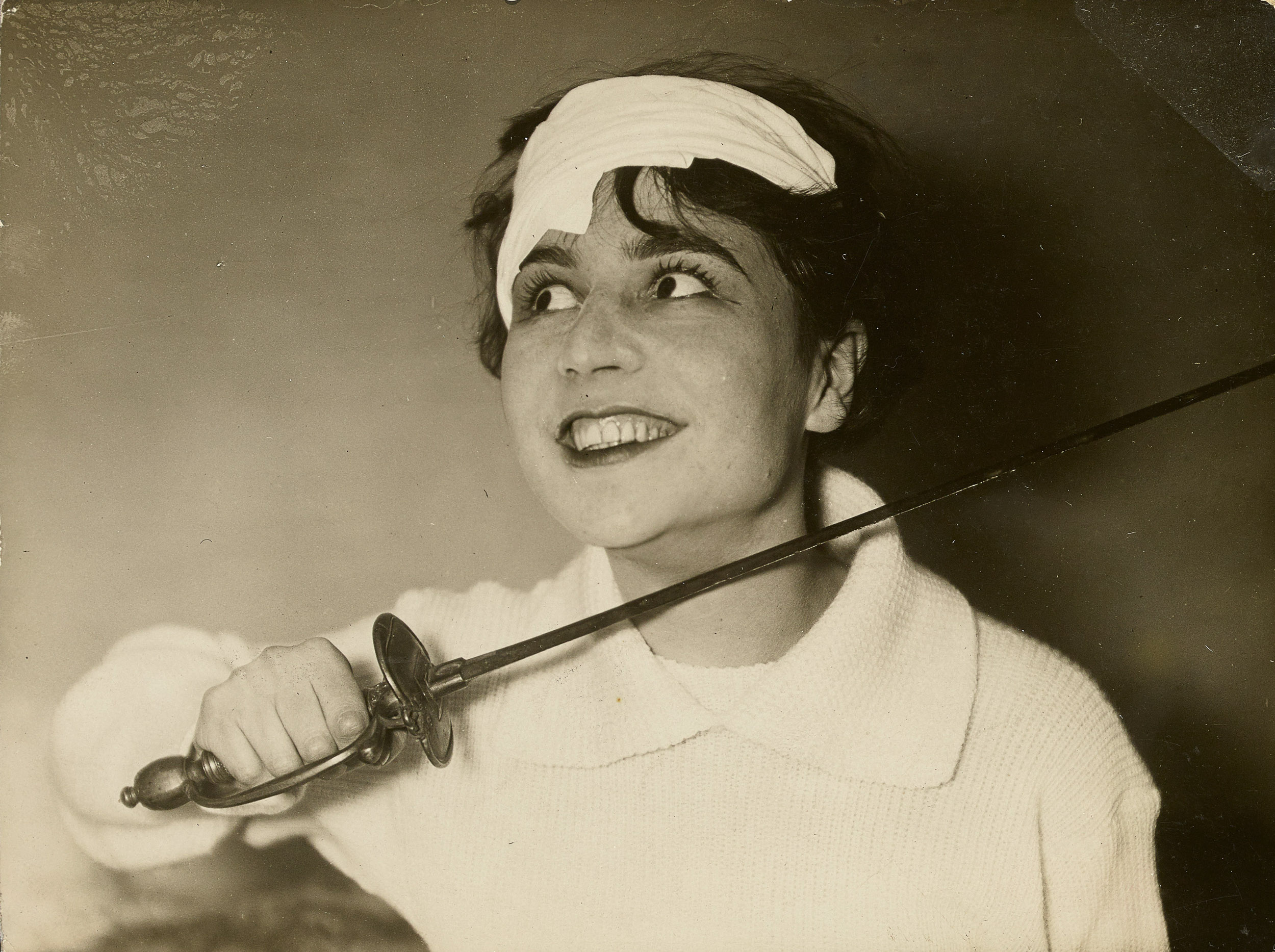 Otto Umbehr is described as one of the most important modern photographers associated with the Bauhaus. In a new exhibition, Berlinische Galerie presents the artist’s vision of 1920s Berlin, his pioneering style of portraiture and his later reportage on the effects of the Second World War.

If you look at early photos of a twenty-something Otto Umbehr, a steely-eyed, yet slightly uncertain, expression gazes back at you. In these self-portraits, some slightly out of focus, all of them bearing no official title, Umbehr (known as Umbo after 1923) was just beginning his studies at the Weimar Bauhaus in 1921, under the tuition of Swedish expressionist artist Johannes Itten.

The artist’s story paints a picture of a young radical. Umbo was born in Dusseldorf in 1902 as the second of ten children of an architect and a teacher, and first laid hands on a 9×12 folding camera at the age of 13. In his early teens, Umbo founded a “Wandervogel” back-to-nature youth group alongside three friends, which protested against rapid industrialization by embarking on long hikes into the woods. Then, in 1920, Umbo participated in a coup to overthrow the Weimar Republic, known as the Kapp Putsch. After that, he dropped out of school and spent his time scampering across small towns in Germany; working in a colliery and as a pottery apprentice, and even joining a mystery playgroup.

Perhaps it’s fair to say that the young Umbo had a revolutionary mindset – or just a problem with authority. After getting accepted into the Bauhaus, Umbo left the school prematurely after an ironic letter addressed to the institute’s founder, Walter Gropius, got him expelled. In 1923, he moved to Berlin, a city that was garnering international attention as a cultural melting pot for art, theatre, and film. As a young artist, Umbo couldn’t have been in a better spot.

He got off to a rocky start, however. With no money to rent an apartment, Umbo rested his head at night in parks and on the ringbahn coaches and worked odd jobs as a labourer, a house painter, an errand boy, and even a clown. It wasn’t until 1926, when his friend from the Bauhaus, Paul Citroen, took him in and placed a camera in his hands, that Umbo discovered his creative medium. He began experimenting with photography, capturing images of himself and his friends in an aesthetic that blended the expressionist approach of Johannes Itten with his own unique way of seeing. The faces of Berlin’s bohemian milieu of actors and artists, as well as scenes of city life, became Umbo’s primary subject and quickly earned him a reputation as one of the most important photographers of the 1920s avant-garde. 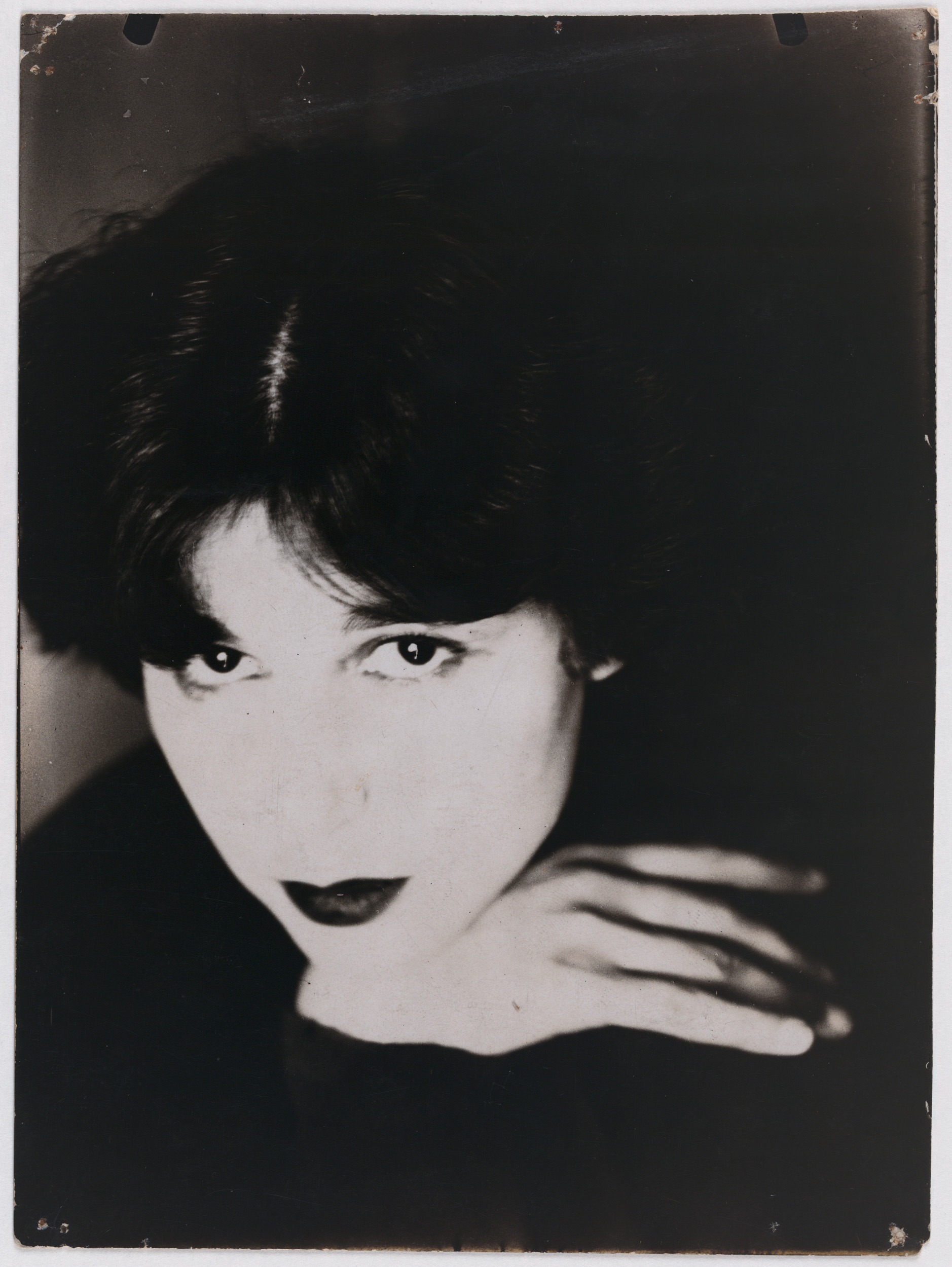 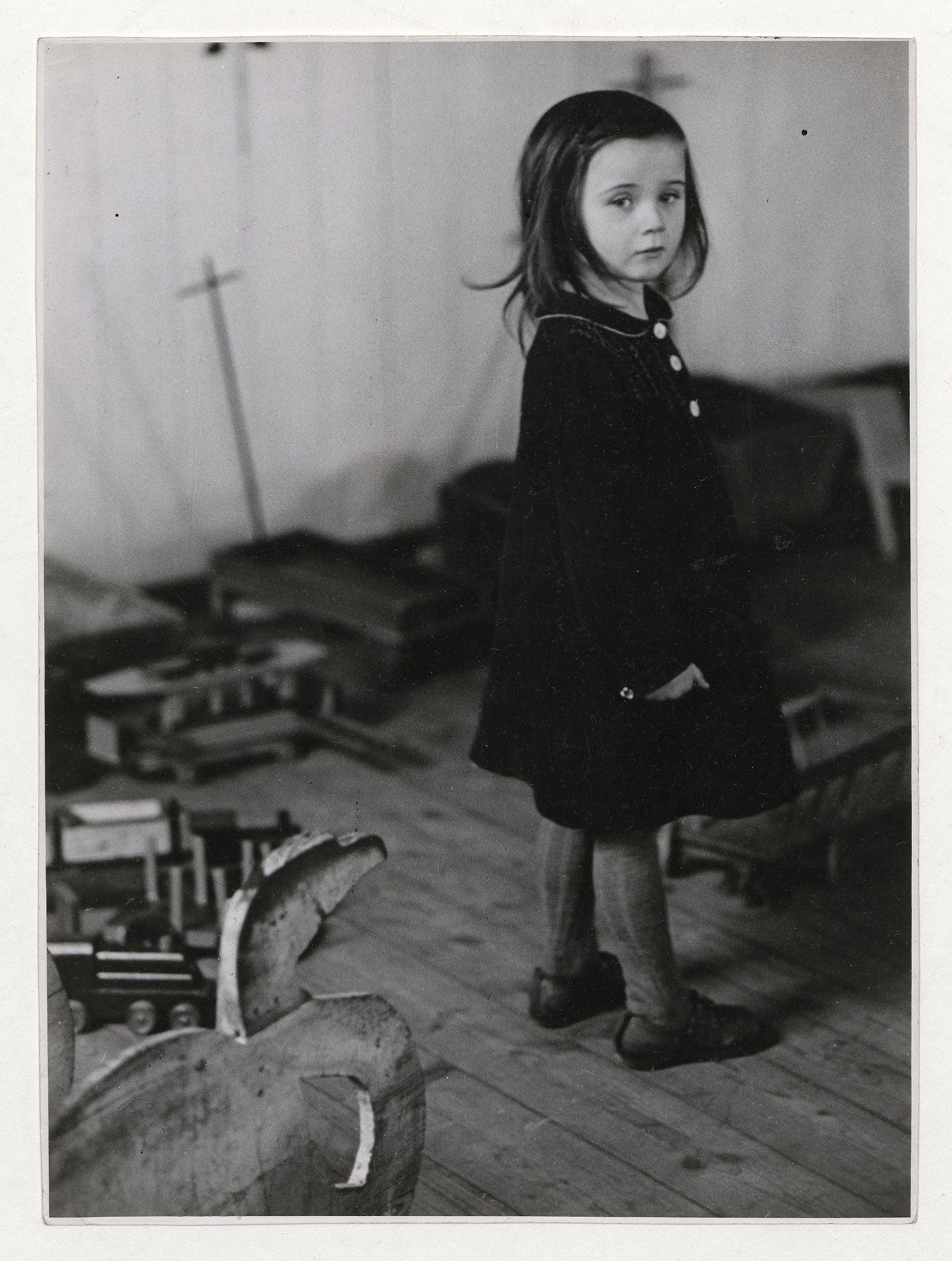 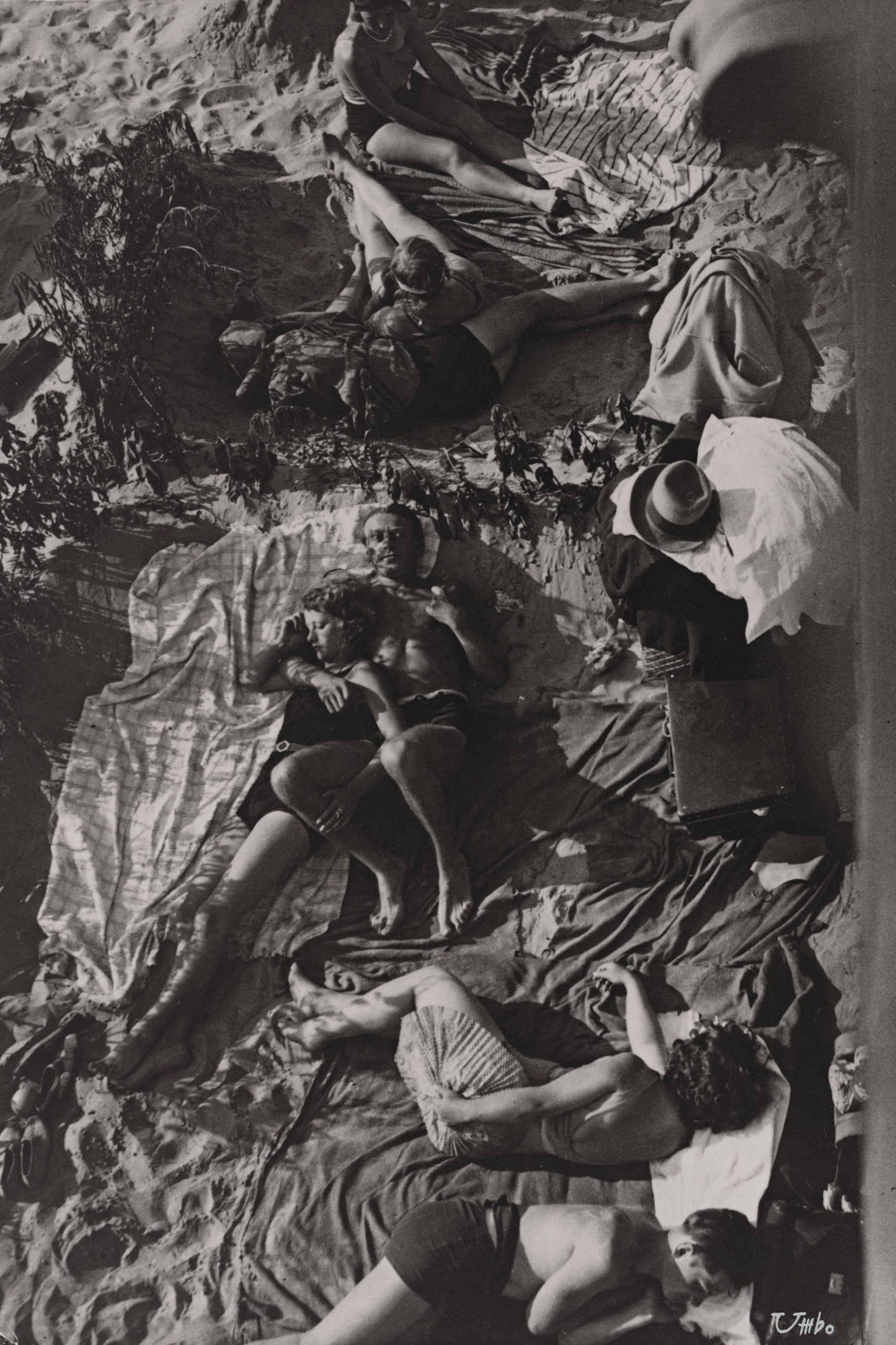 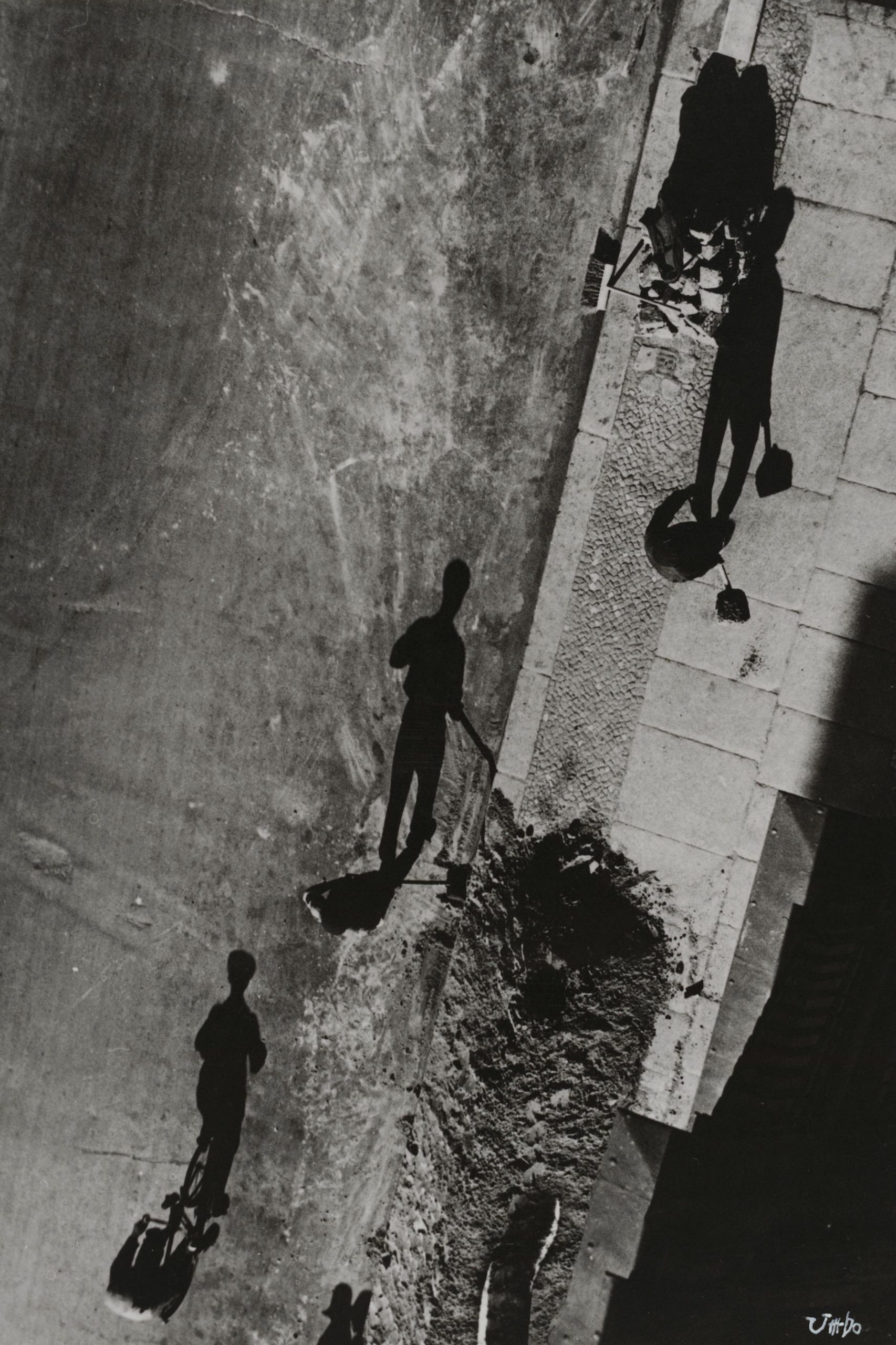 A rising star with a fresh perspective

So, what propelled Umbo’s overnight rise to fame? According to Hanna Vogel, the curatorial assistant for the photography department at the Berlinische Galerie, the artist represented “everything new.” He became known for creating a new type of portrait, which involved extreme closeups and dramatic lighting, a new interpretation of street life and a new image for women.

Indeed, much of Umbo’s early career was dedicated to capturing every shade of womanhood. His images present women in public life – from a dancer stretching to tie her ballet shoes to a theatre performer dressed in a sequined bird costume – and more private moments. The American-German actress and it-girl of Weimar Berlin, Ruth Landshoff, was a frequent subject for Umbo, and his photographs depict the many sides of her life and personality. In one image, the actress looks away from the camera in a playful pose with a toy sword held up to her neck. In another, more intimate photograph, Landshoff gazes directly into the lens with a solemn expression – her features determined only by lines and shadows.

Umbo’s works during the 1920s were an important influence on the artistic movement of the Neues Sehen (New Vision), whose principles were related directly to the Bauhaus. The Neues Sehen identified the camera as being a second eye for looking at the world and involved using high and low camera angles and contrast in form and light. Umbo endeavoured to portray life as it naturally presented itself; capturing the natural expression of people and places. 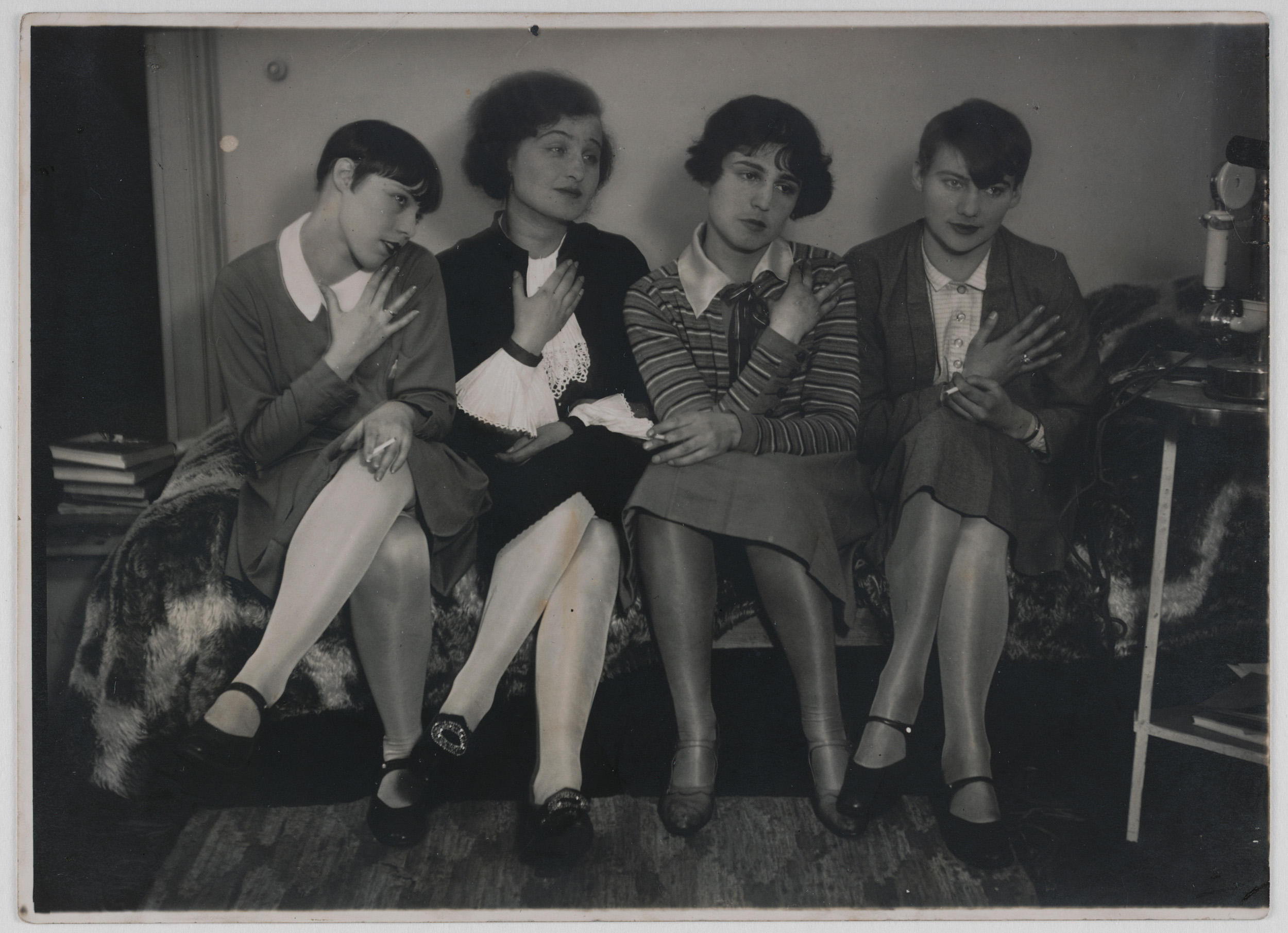 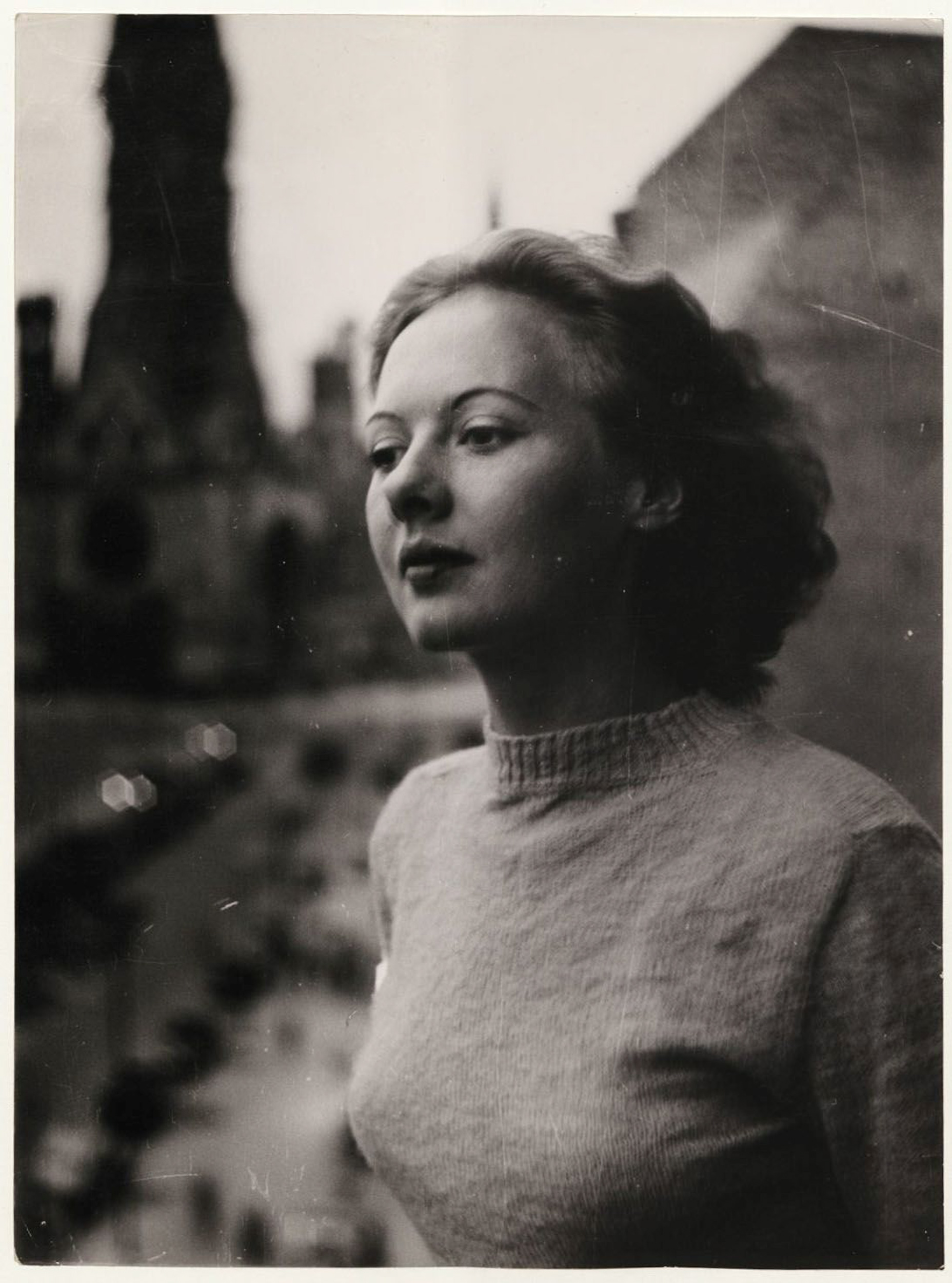 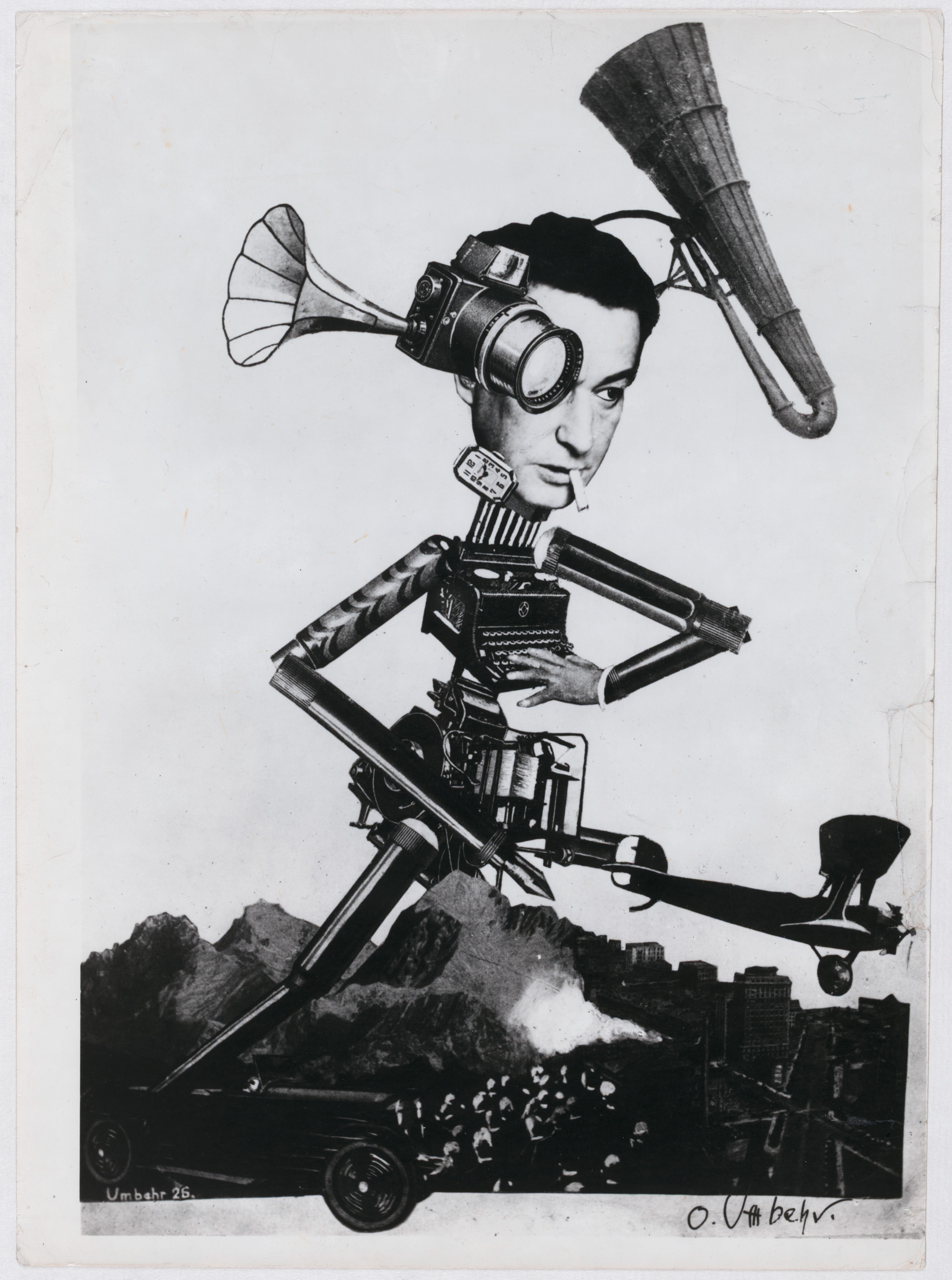 He was a more lucid, playful, even improvisational exponent of the Neue Sehen movement.

This isn’t to say that he wasn’t also fond of experimentation. According to Hanna, Umbo was quite unlike the other avante garde photographers: “He had a rather unusual approach towards the medium. He was a more lucid, playful, even improvisational exponent of the Neue Sehen movement.” These aspects of Umbo’s style can be seen in ‘Mystery of the Street’ (1928) – where the artist turns the aerial view of a Berlin street upside down, calling attention to the elongated shadows of a street sweeper and a mother with her child. In another series of images taken in 1928, Umbo narrates the process of Grock the clown getting dressed. Across ten photographs, the Swiss actor Adrien Wettach is seen putting on his costume of baggy trousers and oversized shoes and finally striding out on stage – a tiny violin tucked under his arm and an abnormally large grin fixed on his face.

It would seem that 1928 was an important year for Umbo. He joined the Deutscher Fotodienst, the foremost photo agency of the Weimar era, and quickly built up a reputation as a pioneer of modern photo reportage. Images of Umbo at this time show the artist looking slightly more self-assured than earlier photographs. In one self-portrait taken in 1930, Umbo takes a topless selfie on the beach in thick-rimmed sunglasses. In another, he looks wistfully at the camera, sporting a moustache and bowler hat. 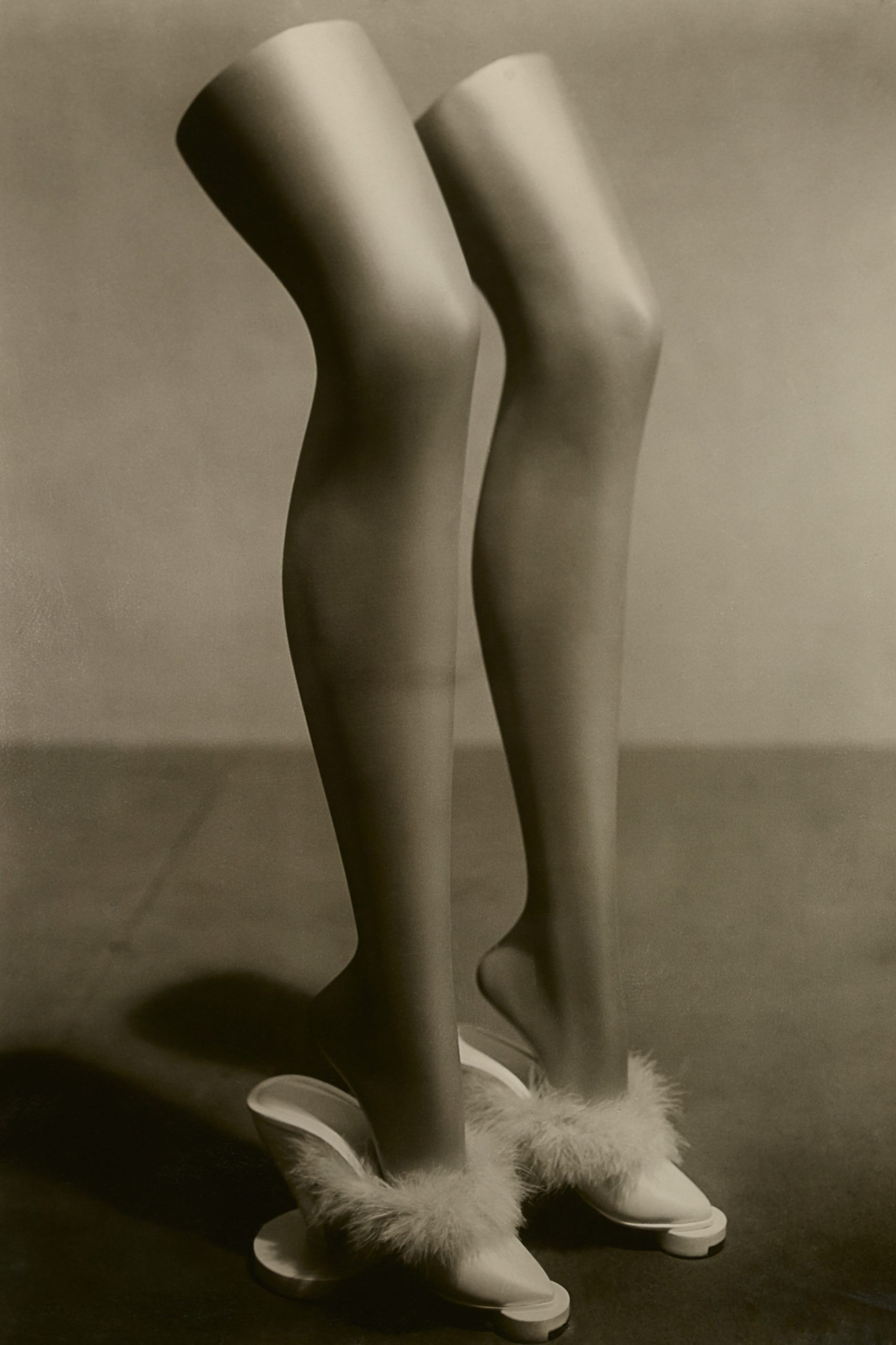 Rebuilding from the ashes

Later, in February 1943, Umbo’s career was brought to a halt when his flat and studio were destroyed in a bombing raid – just six months after marrying his sweetheart Irmgard Wanders. Over 60,000 images were destroyed.

In a letter written by Umbo at the end of the war, the artist describes himself and his wife building up their lives from the ashes – just like the many people he photographed in post-war Berlin in the 1950s. In these images, the theatre and decadence of the roaring 20s are replaced by sombre views of women strolling down Kurfurstendamm, the crumbled Kaiser-Wilhelm Memorial church behind them. Umbo captures citizens simply trying to get on with life: people breakfast outside, couples stroll through parks pushing prams and a lone shopkeeper dresses a mannequin in his shop window.

It was in the latter half of Umbo’s career that the artist’s photography took a political turn. In 1951, he produced several reportages for the Picture Post in the United Kingdom. These included themes such as the liberation of Jewish women from the Bergen-Belsen concentration camp and the protests of starving individuals in Hannover. In a particularly poignant reportage called ‘The Lost Child,’ Umbo documents the plight of a child from the Eisenach area who, along with her mother and grandmother, was made homeless by the war. Aligning with his commitment to depict life as it is in reality, Umbo’s photographs, and their accompanying words, have less of the drama of a tabloid newspaper and more of the delicacy of a watercolour painting. 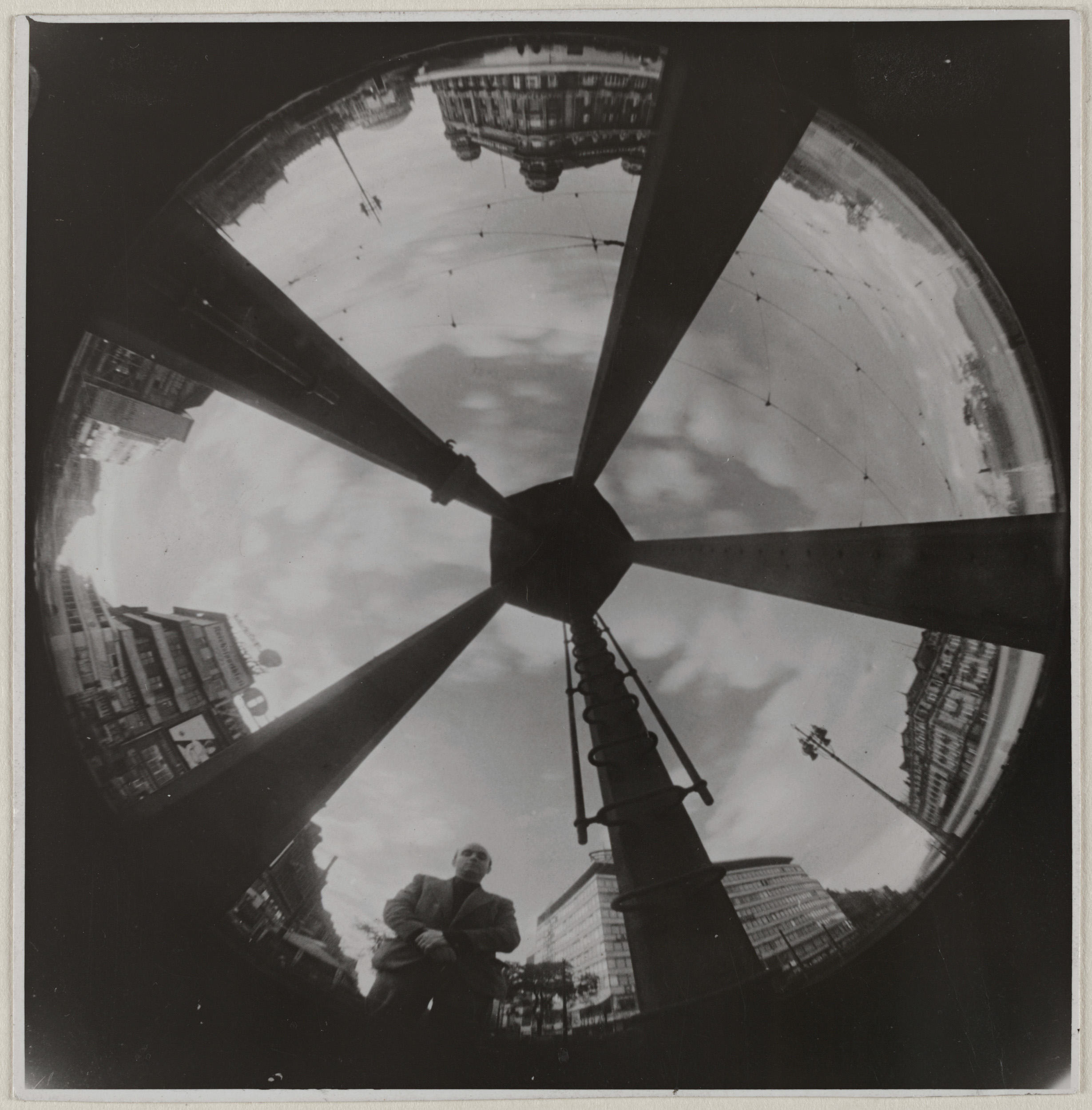 Despite the success of his reportage in the early 50s, Umbo failed to relaunch his career and his works slipped into insignificance. It wasn’t until the late 1970s, when photography was admitted to museums as an art form, that the artist was rediscovered. In 1979, the Spectrum Photogalerie at the Kunstmuseum Hannover put on Umbo’s first solo exhibition after 1945 in collaboration with the Sammlung Sprengel. As most of Umbo’s works were destroyed in the bombing raid, only the photographs salvaged by the artist’s friends remained.

Today, a selection of 200 of Umbo’s works are on display in an exhibition jointly curated by the Sprengel Museum Hannover, Berlinische Galerie and Stiftung Bauhaus Dessau. In 2016, the museums clubbed together with the support of 14 financial sponsors to acquire the collection. Hanna says that Umbo’s works are a “substantial gain” for the collections of the three museums: “For the Berlinische Galerie, Umbo’s work from the 1920s and the early 1930s offer a representative picture of a culturally significant period of the Weimar Republic and the most important years of modernism in Berlin.”

He was a very melancholic, sensitive person, who struggled with feelings of loneliness – a part of his character which he expressed in photography with his poetic and sensitive style.

To those who knew him, Umbo was a free spirit, who grappled with light and shadow in his life as he did in his photographs. He was also full of eccentricities. Apparently, Umbo was a hoarder: his home was filled with weird and wonderful objects that he couldn’t bear to throw away. He also used to save the ash from the many cigarettes he smoked to use as fertilizer for his home-grown herbs, that he’d sprinkle over chicken or duck before roasting.

Like many great artists over the ages, Umbo was often plagued with self-doubt. “He was a very melancholic, sensitive person, who struggled with feelings of loneliness – a part of his character which he expressed in photography with his poetic and sensitive style,” says Hanna. Known today as a brilliant mind who struggled to assert himself, Umbo’s small effort towards self-promotion is seen in the tiny, often inconceivable, signature scrawled in the corner of his photographs.