Berlin’s Bodies of Water at Night

Berlin resident since 2009, Dante Busquets is the photographer taking a close, long look at Berlin by night – but not the kind of Berlin night you might expect. Using the city’s history and location as conceptual starting points, Dante explores Berlin’s bodies of water in his poignant series Fluid Nights.

Dante traveled from his native Mexico City to the German capital years ago, and has been fascinated by Berlin’s history and wealth of lakes and waterways ever since. Liberated by the relative freedom of movement within the city and the resultant ability to take long- (make that very long-) exposure photographs at night, Dante illuminates the ebbs and flows in and around Berlin’s urban spaces in his own patient way. In Fluid Nights, light emerges from darkness, past dances with present, and eerie glows peek out from behind the landscapes. Fluidity plays an important role in Dante’s works, as he plays with light, focuses on the liquid bodies of water he’s so fascinated by, and traverses long spans of time in each photo. We spoke to Dante about his inspiration for the Fluid Nights series, his process, and his experience while completing the series. 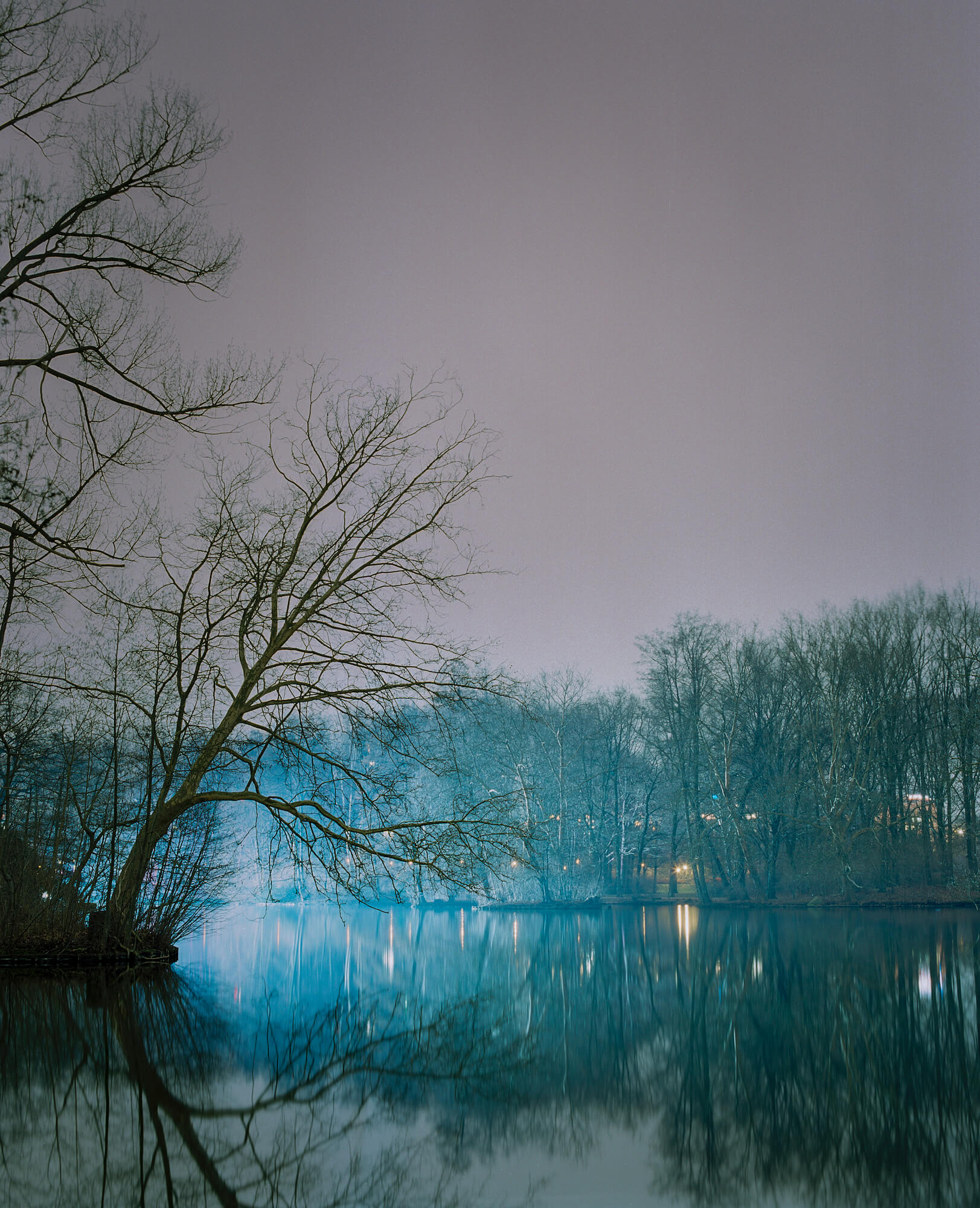 How did you get the idea for this series?
Two things came together to form the idea for the series. When I was growing up in Mexico City, people were constantly talking about how the land we were all standing upon was once part of the great Tenochtitlán, the city that used to be located on an island in Lake Texcoco and that was the center of the mighty Aztec Empire. But the lake was wiped out centuries ago and no one alive today has ever had the chance to see it. I always wanted to know what it would be like to live near the water. When I moved to Berlin, the city offered me the opportunity to unearth that mental image that I had buried deep inside of my mind of living around water.

The other part of the idea came from the difference between Mexico City and Berlin. Mexico City is not exactly free from danger, so it’s probably not a great idea to go out alone and explore the streets with your photography equipment at night. When I got here, I began to imagine the places that would scare me the most to photograph if Berlin were Mexico City. I welcomed the chance to exercise my newly acquired freedom and go looking for dark parks and gloomy city corners while using a camera that forced me to stay in one place and one position for hours – now without fear for my safety. 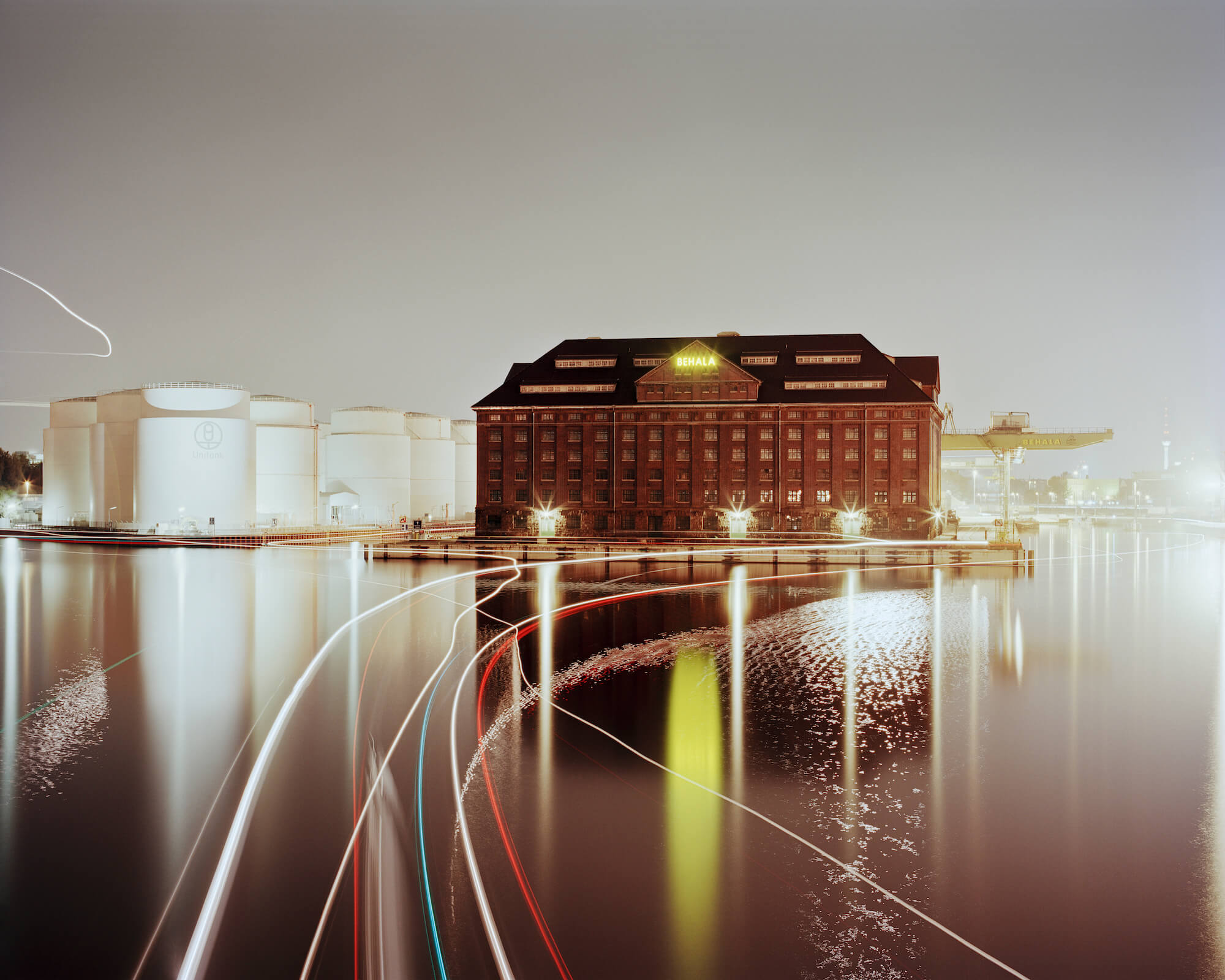 I tried to pick the places that gave me a deeper sense of the city and that I had a strong connection to. 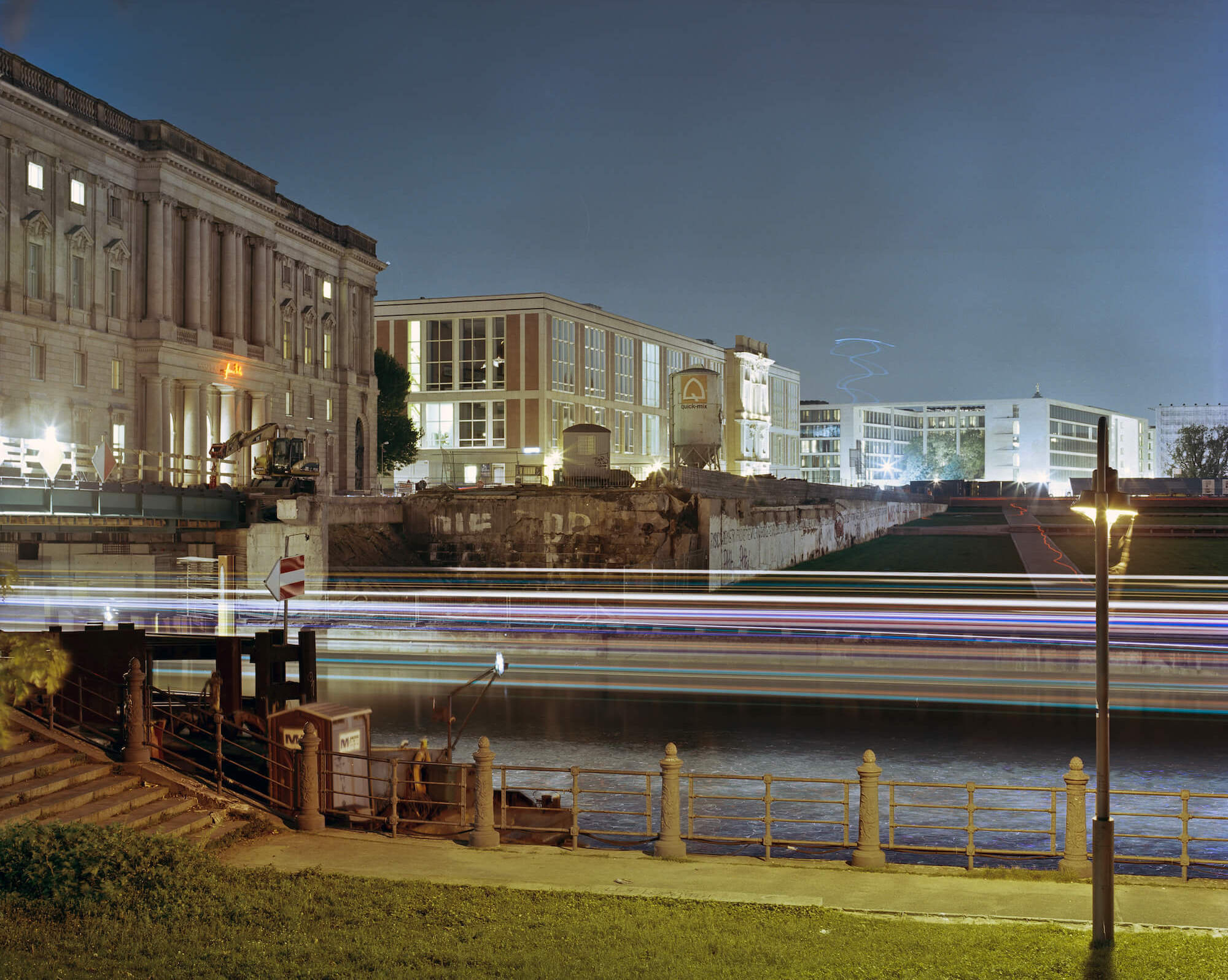 How long did you work on this project?
It was a slow process. The film exposure can last for several hours, so I can only have one go at a time. There were also many missing photographs from when something went wrong during the shoot, so there was a lot of repetition. Sometimes the weather also presented challenges. I shot on and off for about two years, but I plan to do more when I replace the camera that I was working with  – it didn’t survive a trip I made to South America.

How did you choose your locations?
Keeping the legend of the great Aztec city and the lake in mind, I tried to look for the roots of Berlin, starting with its foundation in the 13th century. I supplied myself with a few books: a history book and one about the bodies of water in and around Berlin. I went looking for some of the places I found in them. I tried to pick the places that gave me a deeper sense of the city and that I had a strong connection to, as well as the ones that inspired me to explore at night. 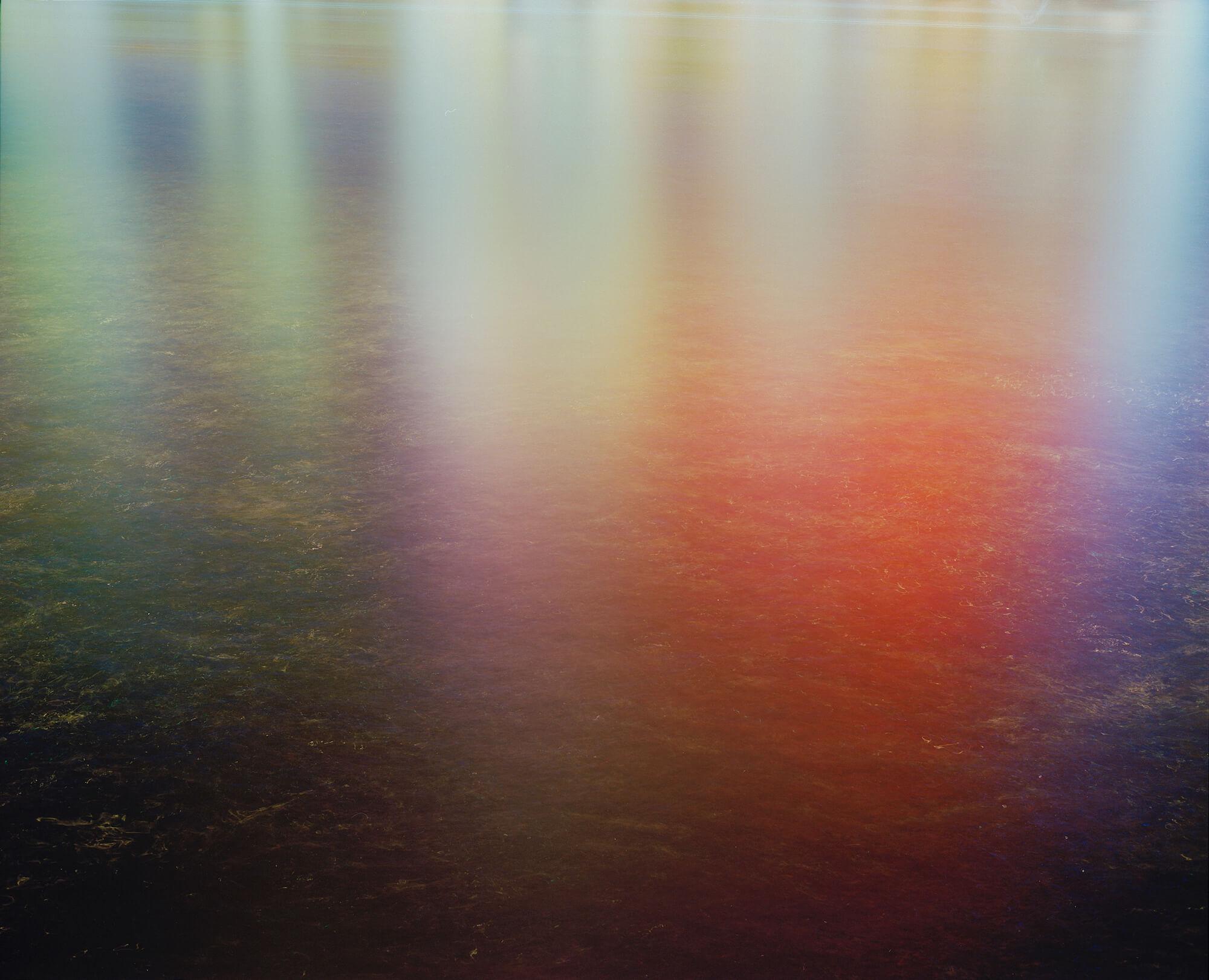 What challenges did you face?
Finding the locations was difficult because you need to scout them out first – you need to think about what you want in the picture while it’s still light and you can see everything. As you move along, you learn that some things don’t translate well from day into night, and then you need to go back to the interesting places you didn’t get right the first time. It’s key to be a little bit familiar with the location before shooting, and to get set up before it’s dark. Also, being somewhere other than Mexico City doesn’t mean that there aren’t any challenges out there, so you need to be alert at all times. I was often in a really dark place where I couldn’t see anything, but I also didn’t want to attract attention with flashlights since I was standing with a camera that I wasn’t able to move, sometimes for up to four hours. Then there’s the editing process. It’s difficult to cut out photos that you like but that don’t work well within the series, since it’s not easy to get a nice clean shot in the first place. 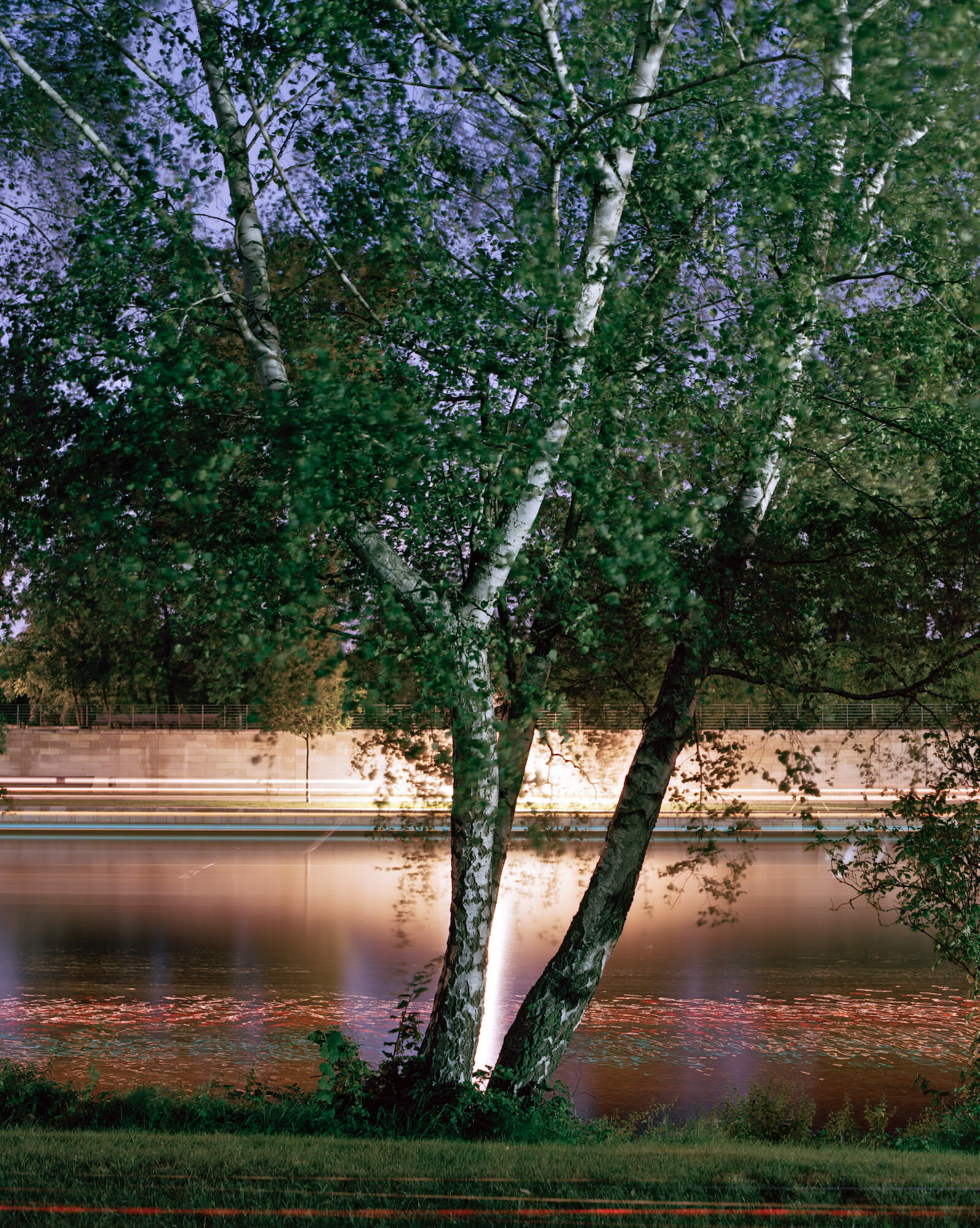 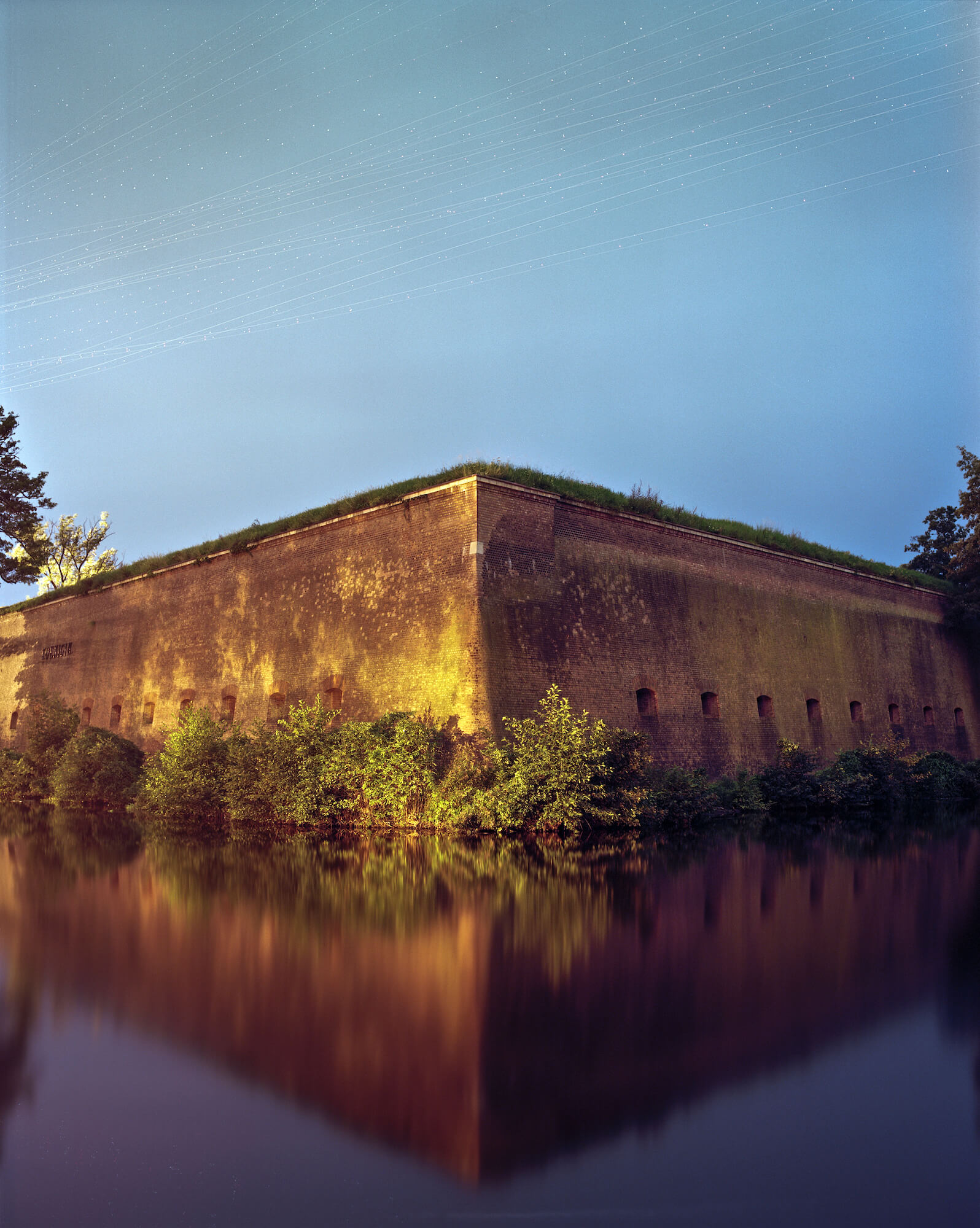 What was your process like when you visited the locations?
It took me a while to find a system that worked for me. When I finally did, I would make a list of the places that grabbed my attention from the books that I mentioned earlier. After that, I’d go see the location in person and take some shots to try to visualise the results. Then came the planning. Sometimes I wanted to have the path of the moon in the frame, and sometimes I wanted to avoid it, so I had to find the right day for the shoot. I also had to think about what to bring with me, depending on the route and the time of year. A few times, I invited a friend to come along and have a conversation with me in the dark. I shot with a medium-format camera that uses roll film instead of individual plates, so I had to plan out consecutive nights (as much as that was possible) if I wanted to see results quickly, since I had to shoot ten frames before I could develop the film. Sometimes I would retry a photo if I knew I had messed it up within the first hour of exposure. If more time than that had passed, I would come back another time and do it all over again. 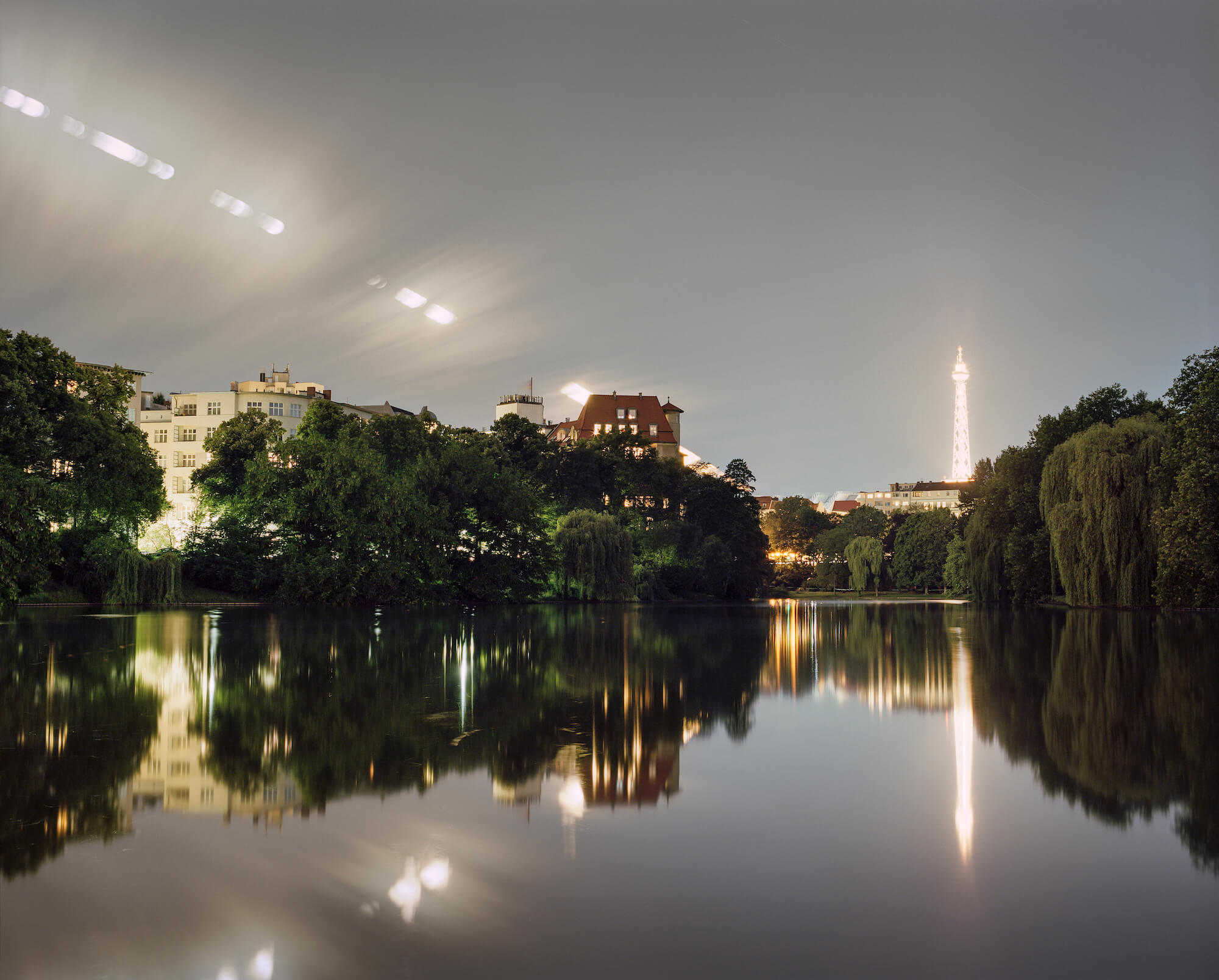 Did you experience anything surprising or funny during your night strolls?
I wasn’t expecting all of the attention I got when I was shooting in near-darkness near the place where Karl Liebcknecht was executed inside Tiergarten. On another occasion when I was working in the park next to Plötzensee, there was someone nearby who I could only hear and who kept rambling on for a long time. Out of nowhere, this person got upset and started randomly throwing glass bottles into the darkness, and a couple landed near me. I had to cut the exposure short and get out of there before one landed on my head or on the camera. Another time, I was shooting inside the Schloss Charlottenburg grounds, but it hadn’t occurred to me that the park closes its gates after dark and that I would be locked inside of the beautiful garden. I had to go look for a security person, who got very angry at me. He made me jump a fence instead of unlocking it, because he was worried that his supervisor would find out that I had stayed inside the park after closing time.

For more information on Dante Busquets and his body of work, visit his website. 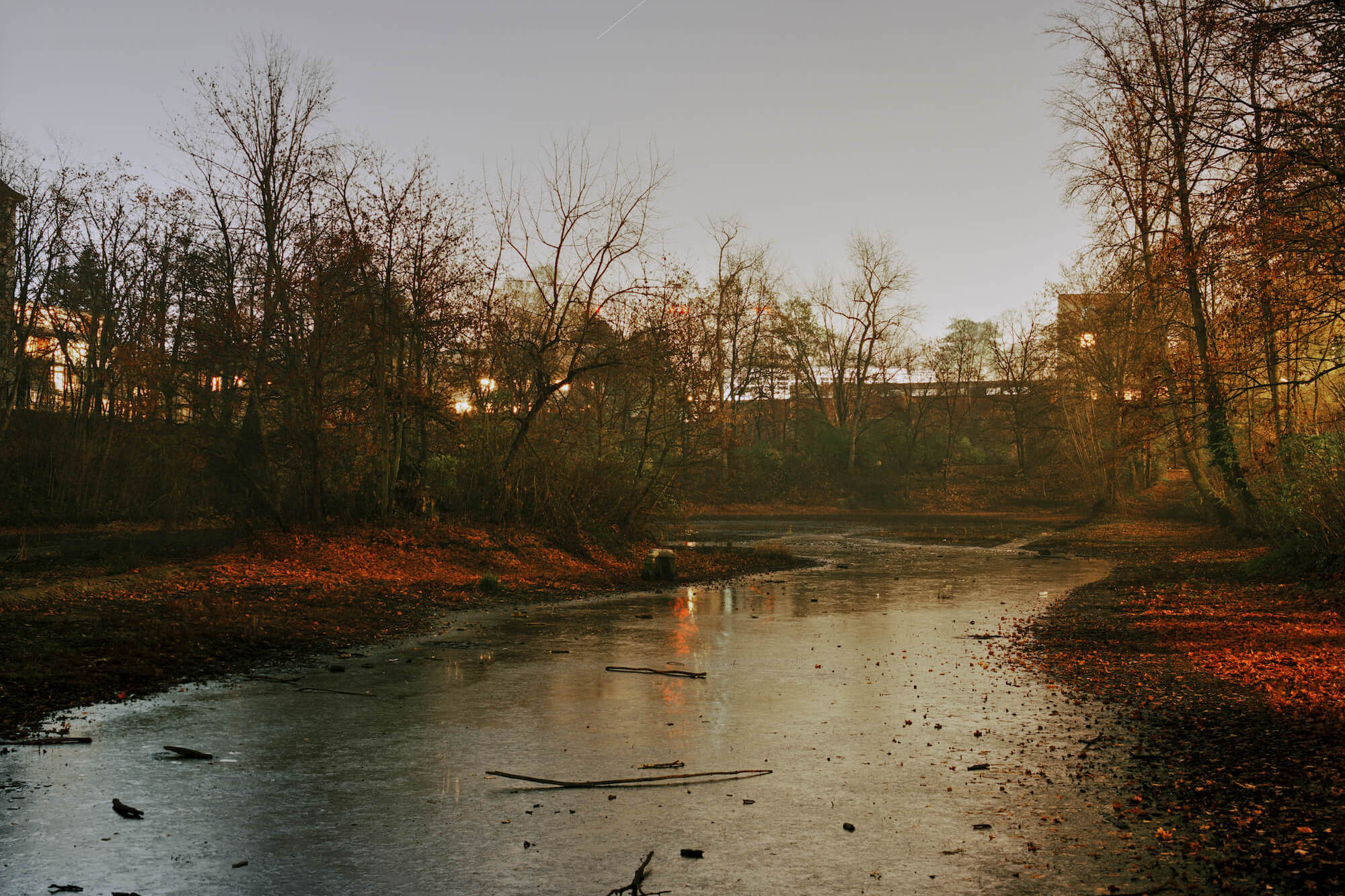