No photos on the dancefloor 1989 - Today at CO Berlin 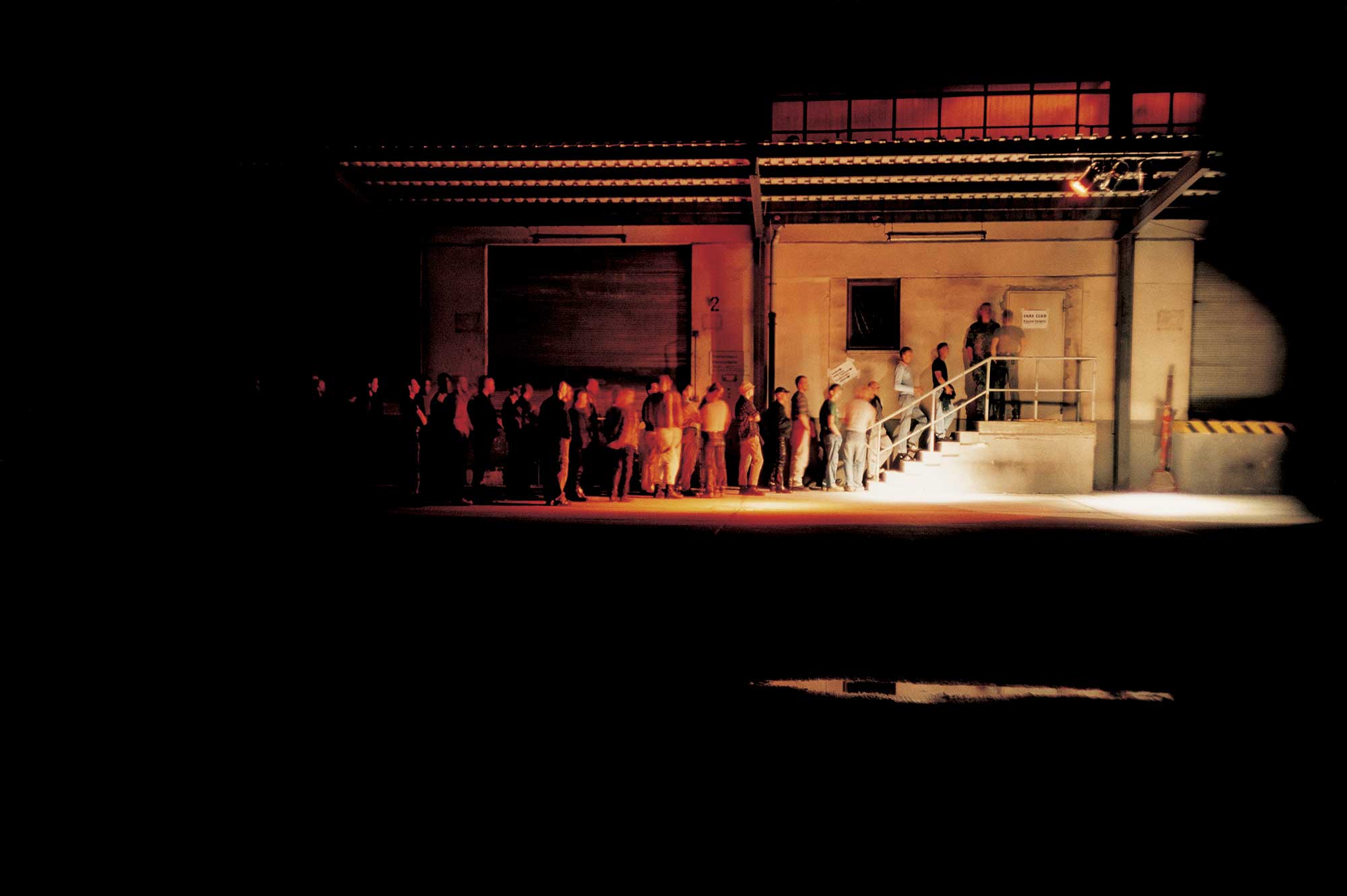 “That night I had an overwhelming sensation that this was something radically new, that I was glimpsing into the future. Everything about that party was different from anything I had seen before: the location, the people, the music, and the act of dancing together uninhibited.”

Heiko Hoffman was just 17 when he went to his first tekknozid party, a typical acid-techno rave held in East Berlin in the early 90s. The Wall that had divided the city both physically and ideologically had just come down and young people were flooding into the city’s semi-ruined spaces to dance, create and lose themselves in the thud of techno beats. And this was all before smartphones became so ubiquitous.

“The reunification of Germany happened first on the dancefloor,” Heiko tells LOLA. “Clubs were neutral ground for people from the West and the East to discover something new together. It was at these early parties that the prejudices that people had had before began to fall away.” 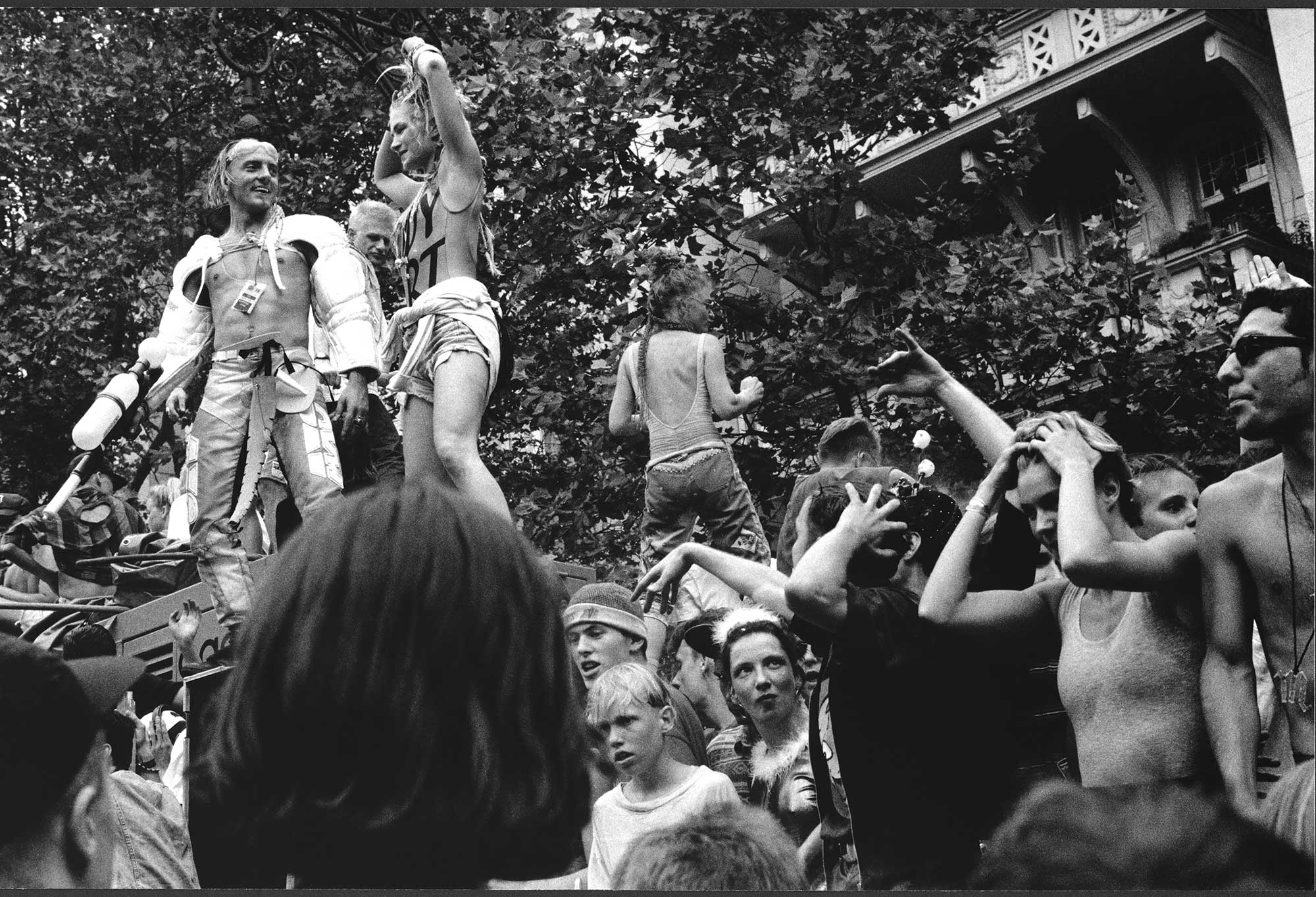 The reunification of Germany happened first on the dancefloor.

In a pre-digital age, clubs were a safe haven for people to explore music, sex and spirituality away from the scrutinizing eye of a camera. With parties that lasted for days on end, Berlin’s early clubbers could suspend themselves in time, shed their self-consciousness and leave all their cares for the outside world at the door.

It is exactly this atmosphere of freedom, anonymity and ecstasy that CO Berlin’s newest exhibition, No Photos on the Dancefloor! aims to capture. Co-curated by Felix Hoffman and Heiko Hoffman (no relation), the exhibition charts the evolution of Berlin’s sacred club culture from the fall of the Berlin Wall in 1989 to the present day.

Through a collection of photos, videos and documentary material from artists such as the notorious Berghain bouncer Sven Marquardt, influential German photographer Wolfgang Tillmans and the manager of the former MARIA Club, Ben de Biel, the exhibition explores the many facets of Berlin’s unconventional nightlife. But it also protects the aspects that should remain hidden.

“The photos in the exhibition don’t show the events that happen on the dancefloor,” Heiko says. “These things must always be kept secret.” 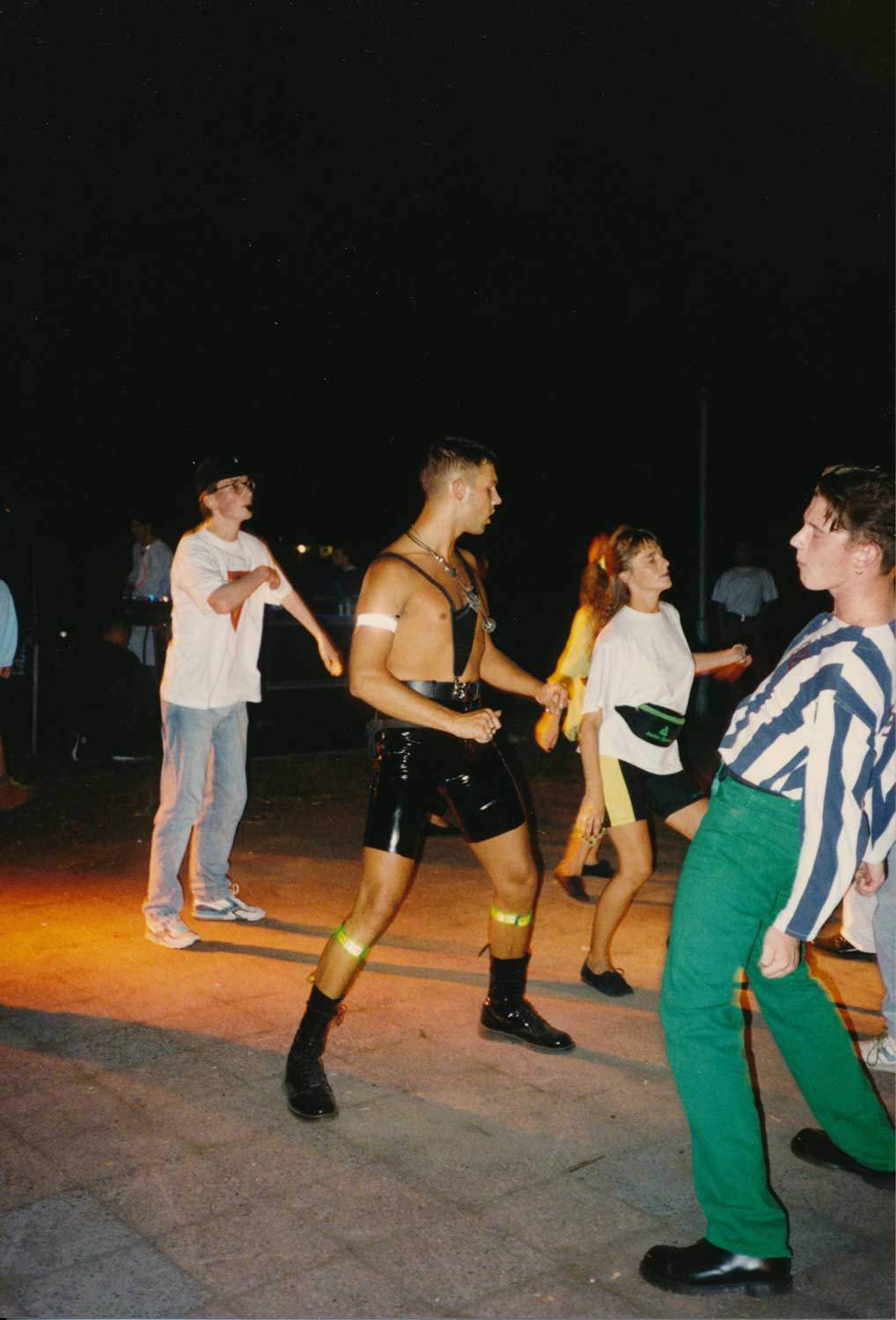 Indeed, No Photos on the Dancefloor refers to a feature of Berlin’s clubbing scene that was implemented at the dawn of the smartphone era to protect the privacy and safety of the city’s dancers: the no photo ban. As partygoers enter clubs like Berghain and ://about blank, a small circular sticker is secured over the lens of the camera to prevent overzealous selfie-takers from disrupting those around them.

While many suspect this to be a PR gimmick, the no photo ban defends the clubbing experience from the intruding presence of technology. It ensures clubbers stay immersed in music people, and sensation without the fear of being snapped by the imposing lens of a camera.

However, it’s not just the threat of surveillance or unsolicited photos that cameras and smartphones carry with them. The act of whipping out a mobile to send a WhatsApp message or check Instagram not only disrupts the atmosphere of a dark room with a glaring screen, but it also imposes time and structure into a space designed to be limitless.

“People enter into a very intimate relationship with music at clubs – a relationship that needs to be protected from gawkers,” writes journalist Jan Kedves in the exhibition’s accompanying catalog. “It is hard to imagine anything more uncomfortable than being photographed in there in an uninhibited, intoxicated state.” 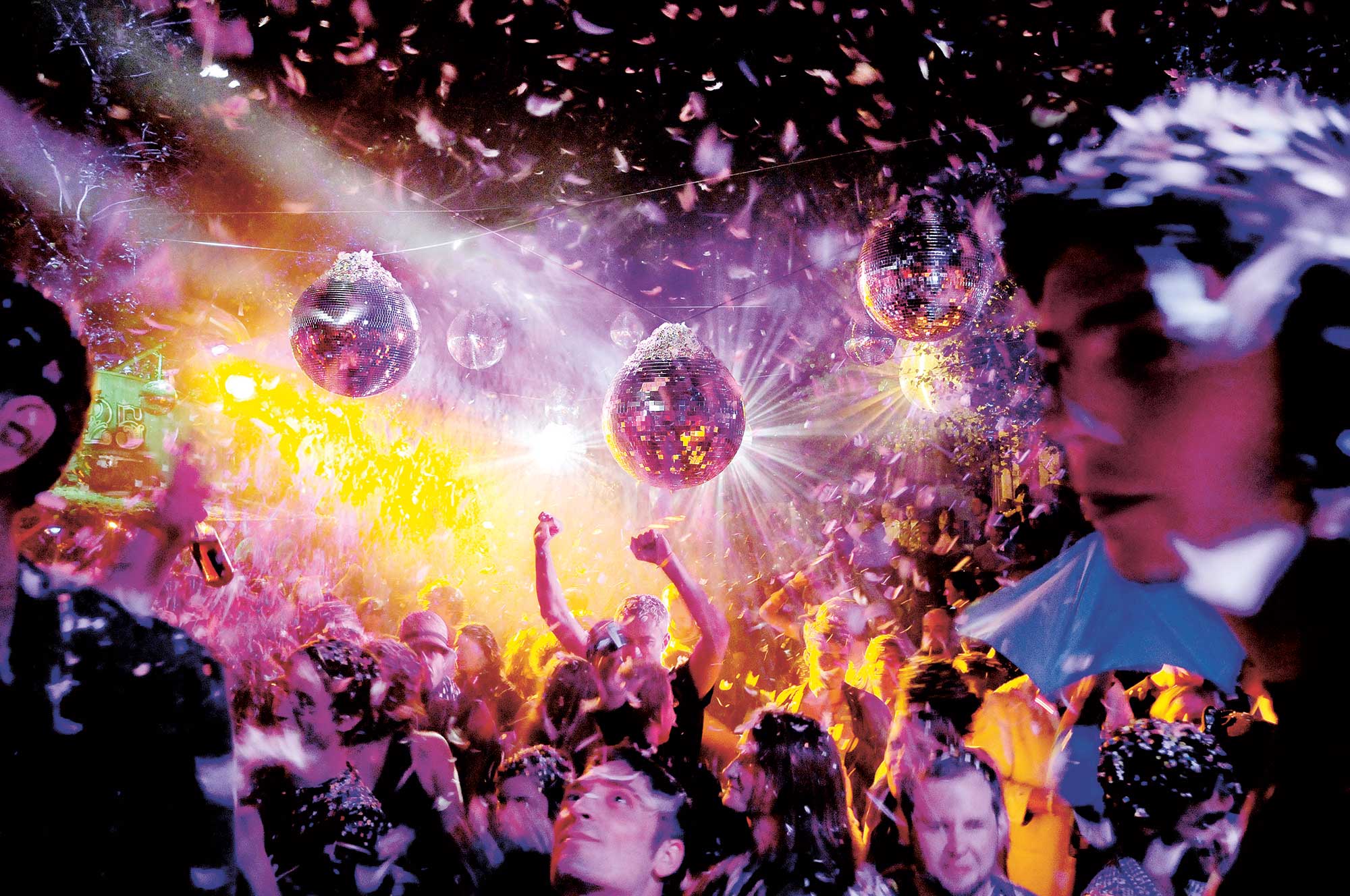 So, how can a photography exhibition designed to lift the veil on Berlin’s clubbing culture simultaneously defend the no photo ban? For Heiko, this “tension” between wanting to document the legend of Berlin’s dancefloors and wishing, simultaneously, to preserve their mystery forms a central part of No Photos on the Dancefloor.

Many of the images on display give the illusion that the viewer is intruding upon an intimate moment. A photograph of acclaimed DJ, Peaches, after a show in 2004 looking straight at the camera – her hair tousled with makeup smudged and eyes raw with exhaustion – gives the interested voyeur a rather detailed closeup of the face behind the music. In another image by Carolin Saage, a sleeping woman lies under a layer of confetti and glitter, perhaps unaware that she has been the subject of one photographer’s inspiration.

The exhibition also showcases a number of intimate, private dancing spaces that were created in the crevices of the city’s industrial wastelands. On display are images of bare rooms stripped of paint – with nothing but a DJ set and a scant collection of liquor glasses – dance floors made from piled-up crates of beer and strangers locked in embrace.

These images aptly capture the ‘anything goes’ nature of Berlin’s early nightlife, but they also make a strong statement about what clubbing in the city is really about: the creation of what Heiko calls a “temporary community.” 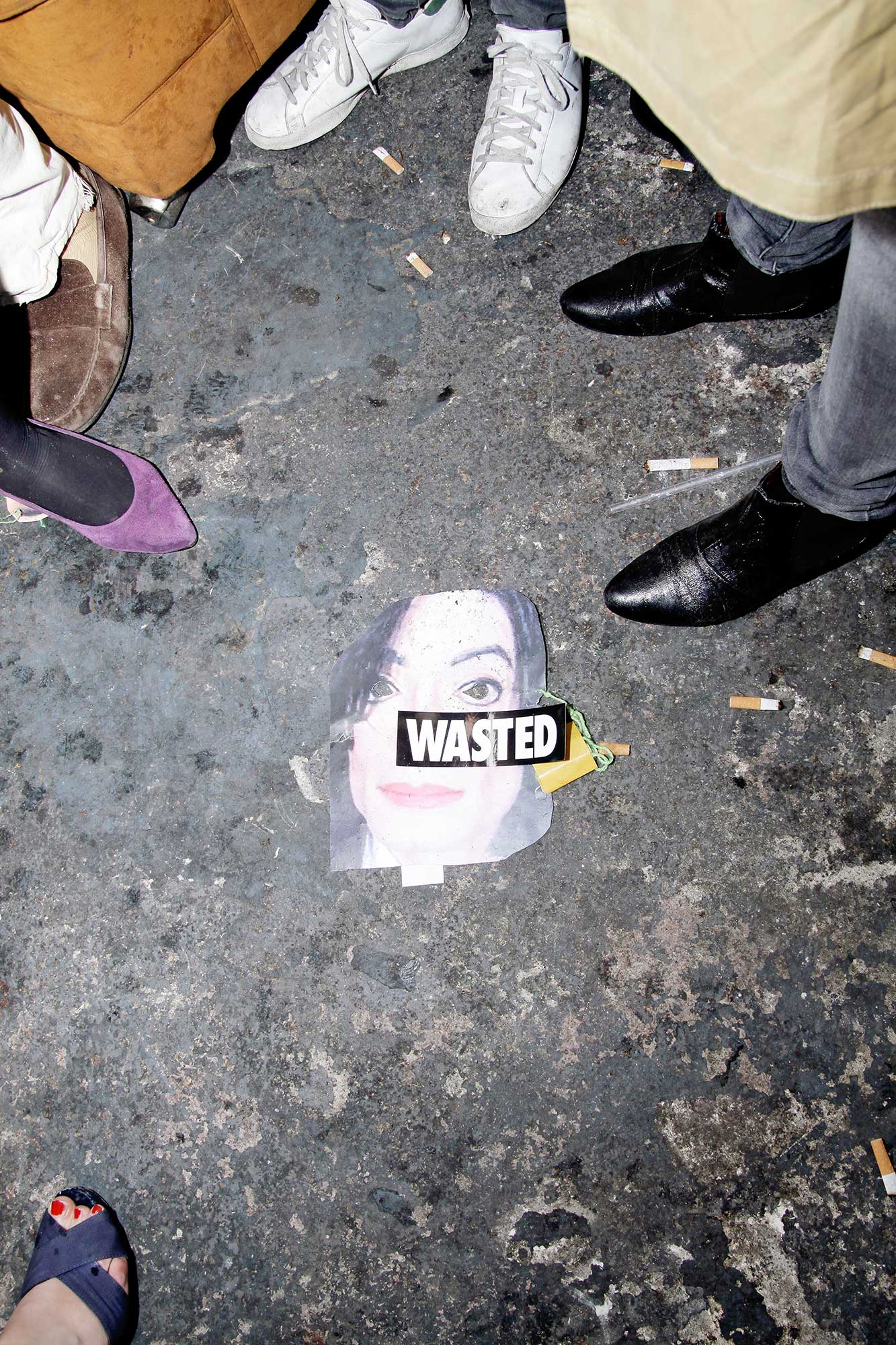 Fleeting social exchanges that last no longer than a night or two form the bedrock of Berlin’s clubbing culture even today. Photos from Tilman Brembs’s Island of Youth (1991) and Ben de Biel’s Love Parade (1990) to Carolin Saage’s Confetti Night, (2007) show individuals not hiding away in the dark recesses of a room, but moving and interacting with those around them. These photographs stir a feeling that an indeterminable something is taking place in these parties – like a mysterious, magnetic force is binding people together.

Perhaps Berlin’s early clubbers were unaware that they would become part of such a monumental movement. Heiko looks back on the early 90s as a time ripe with possibility but it’s perhaps only now, with the gift of hindsight, that he recognises his “place in history.”

Today, Berlin’s clubs are not only regarded as a global phenomenon by techno enthusiasts and partygoers worldwide, they’re even recognized by the state as cultural institutions. In 2016, Berghain was deemed a place of cultural significance by the Berlin-Brandenburg fiscal court and was even granted the same tax status afforded to concert halls and museums.

However, in a city threatened by rising rents and gentrification, how can Berlin’s clubs survive? And, in an age of digitalization, how can the city’s nightlife maintain its mystery? These questions are raised by No Photos on the Dancefloor and are ultimately left unanswered.