Encapsulating a City in a State of Flux 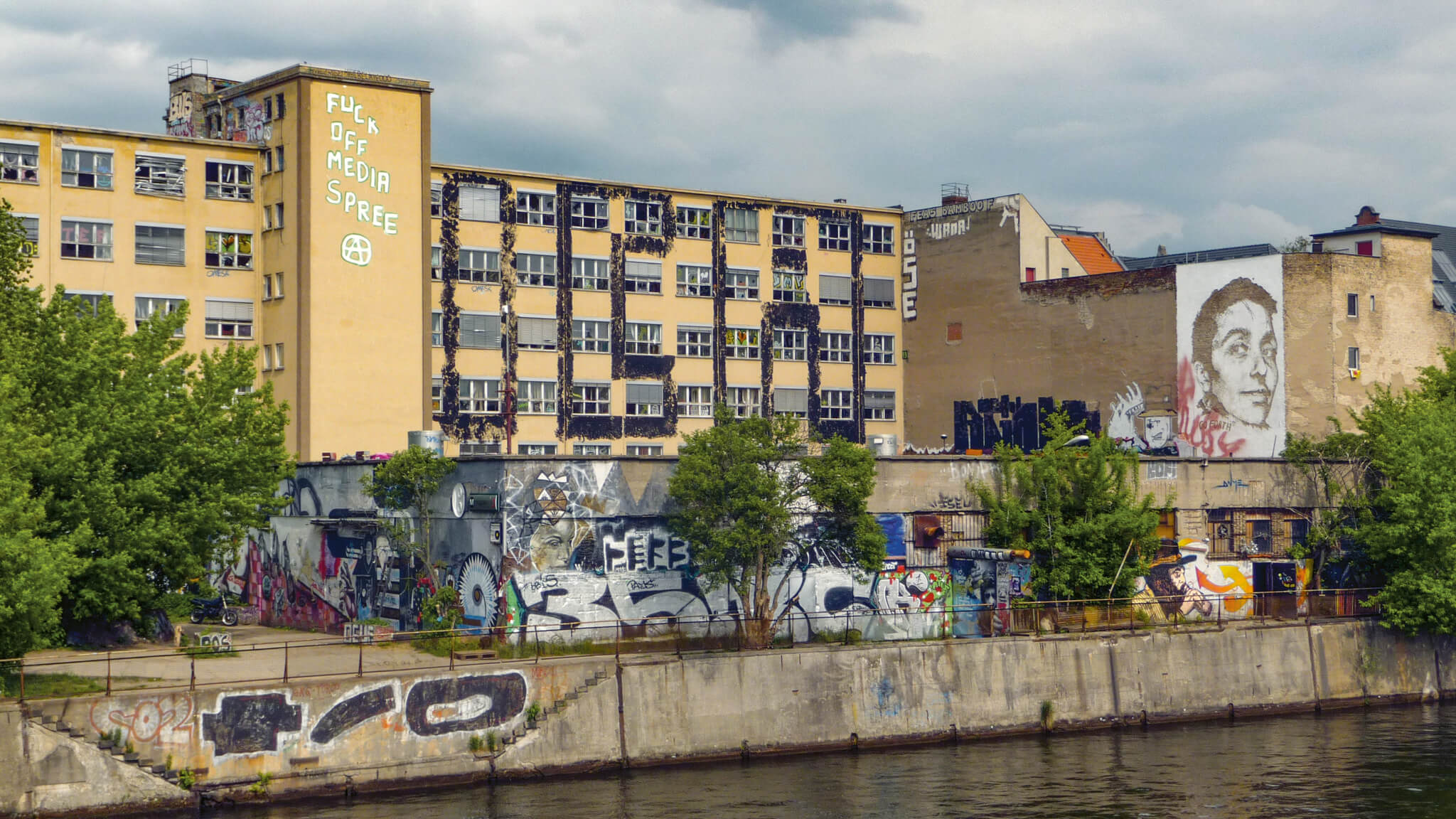 Alexander Steffen published his first Vanishing Berlin book back in 2016. It’s a beautiful document of a city undergoing rapid transformation, and one that evokes feelings of nostalgia in a city that changes at a blink-and-you’ll-miss-it pace. His new book, Vanishing Berlin: For the Time Being, takes an even closer look at the visual identity of a Berlin that is in a perpetual state of flux.

Here, Alexander reveals the thought processes and motivation that led to the creation of this new volume, and looks ahead to a future that is still being written.

The Future Has no Landlord

“More than a decade has passed since I started working on the Vanishing Berlin photo project. During that time property prices in Berlin have risen by more than 70 per cent. In the inner city most of the wasteland has made way for large construction sites.

While shops with a long tradition, such as Musik-Bading in Neukölln, are slowly falling into decay, soaring rents are forcing more and more family businesses and small retailers to give up, and the distinctive local culture of clubs and neighbourhoods is being squeezed out of existence, a blueprint for the future, in which mediocrity and uniformity are the defining characteristics, is taking over. The diversity and charm of Berlin’s architecture is being torn down one building at a time and buried in concrete.

Berlin is controlled by the hunger for profit, and this will shape the city’s character for a long time to come. Unless alternative concepts are developed to counteract what is in fact a global trend, city centres will continue to decline, becoming uniform, soulless places that are deserted as soon as the fashion chains and franchise stores – which all look the same, everywhere – switch off their lights. 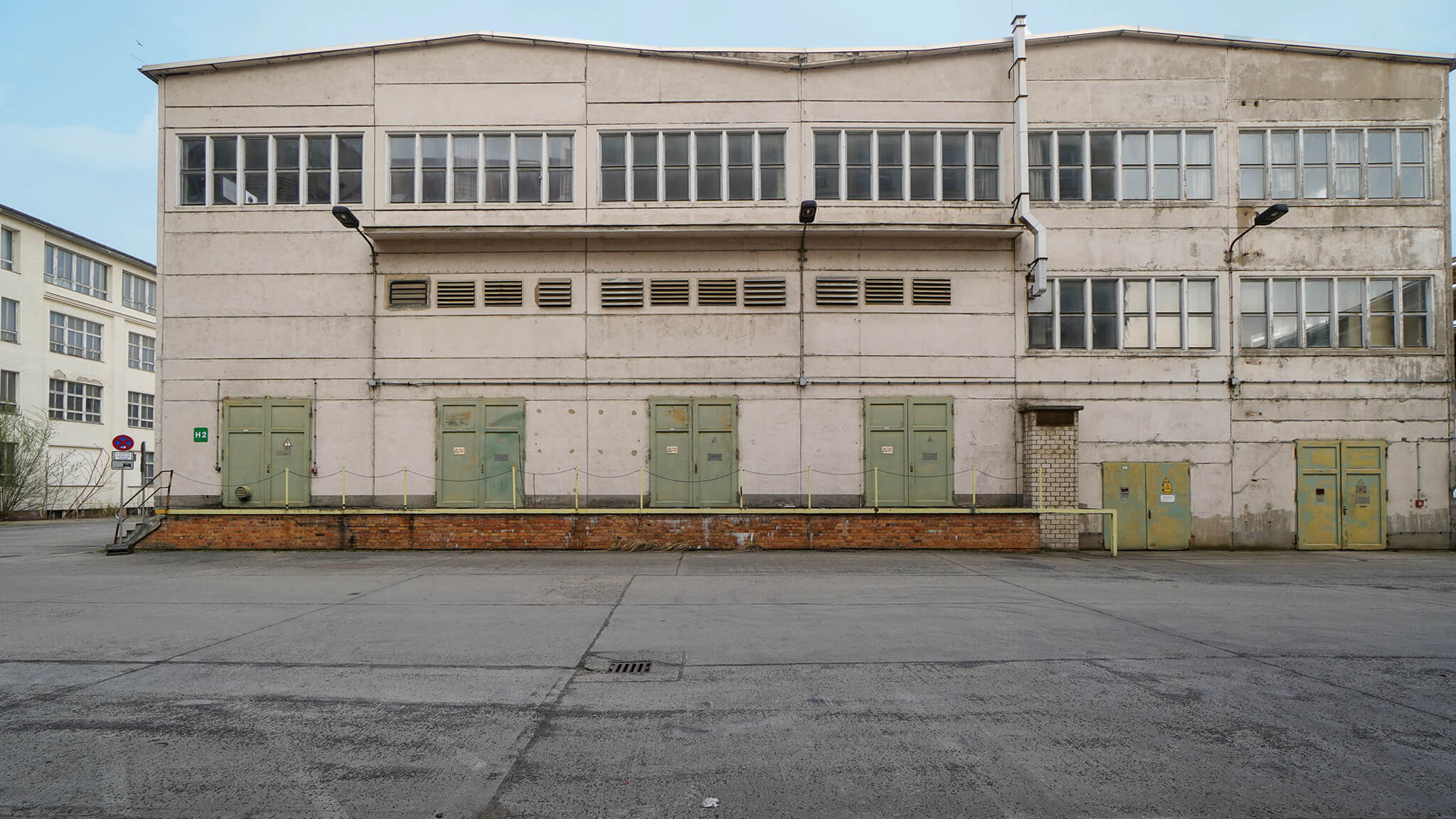 Berlin is controlled by the hunger for profit. 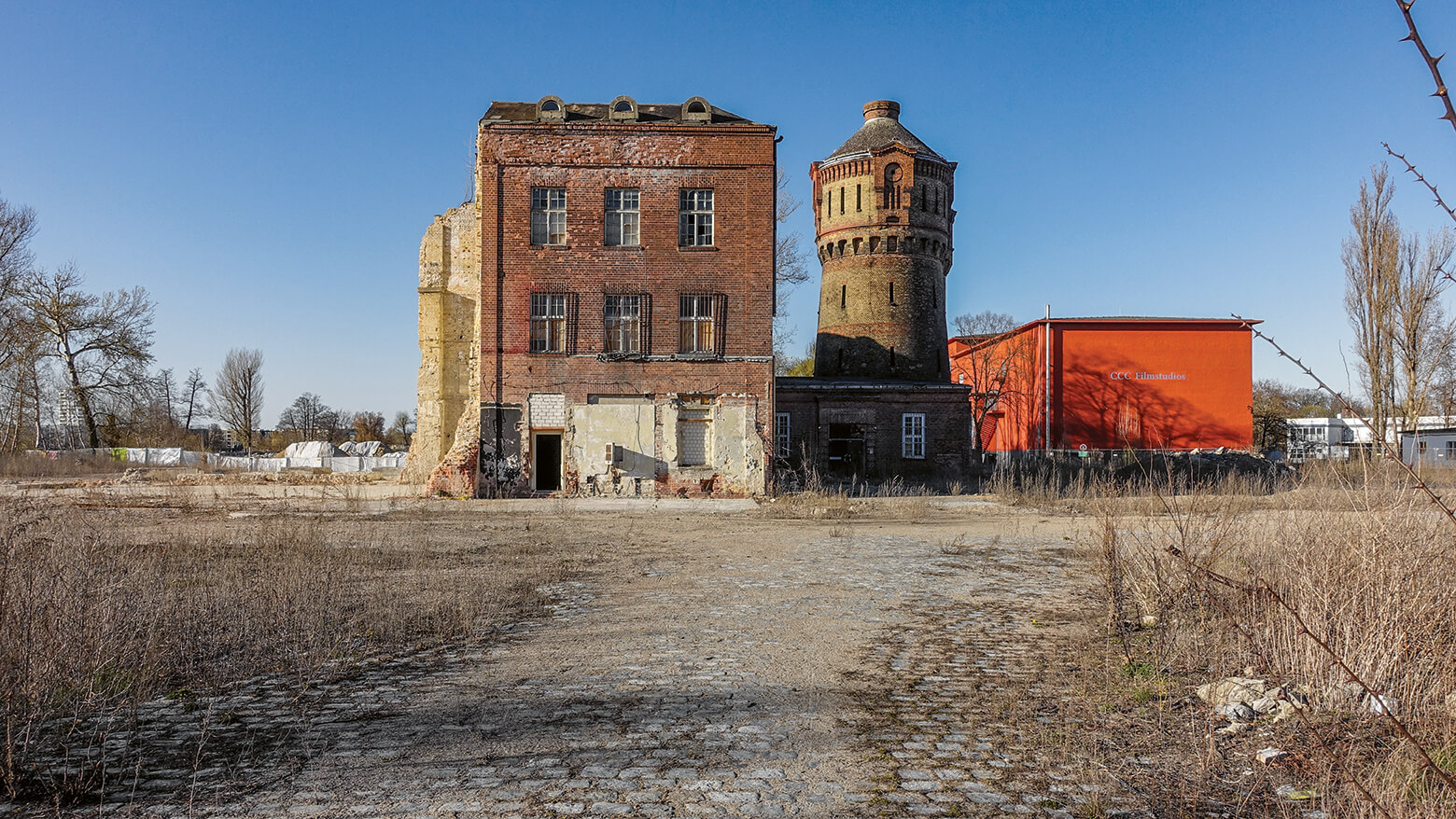 Since the reunification, the Senate of Berlin has sold 200,000 public flats and privatised an area the size of the entire Friedrichshain-Kreuzberg district. At the same time, real estate speculators were given free rein. Today, Berlin is an Eldorado for money launderers and fortune hunters of all kinds. The scramble for this “concrete gold” is becoming fiercer every day. As a result, more and more people are struggling to find affordable housing. There are currently 40,000 people in Berlin who officially have no fixed abode. There is a pervasive fear of losing one’s home.

An obvious example illustrating this type of ill-conceived urban planning can be seen in Mühlenstrasse near the Mercedes Benz quarter. The multinationals with branches in the neighbourhood have decided to turn a blind eye to the interests of local inhabitants. And they obviously lacked the courage to embrace visionary architecture. The call “Mediaspree versenken” (“Sink the Mediaspree construction project”) has been replaced by “Kapital schafft Fakten” (“Capital creates facts”). Seen through the eyes of a curious flâneur, this part of the city has simply been annihilated. There is no reason why anyone would want to spend time there – except for making shady deals in one of the countless offices, handing over the keys for one of the aseptic penthouse apartments with a view of the river Spree, or attending one of the soulless mass events in the local multi-purpose arena.

In Chausseestrasse, not far from the Wedding district, the industrial charm of the neighbourhood has been fully destroyed within the space of just a few years. In 2016, the construction of Daniel Libeskind’s Sapphire Apartments was completed – on a lot that used to be one of Berlin’s most beautiful wastelands. From there, you now have an unobstructed view of the monumental new building of the Federal Intelligence Service, with the lines of its distinctive architecture echoing the arrow slits of a medieval fortress, and with a unique steel and plastic installation referencing surveillance cameras disguised as palm trees in front of the building. 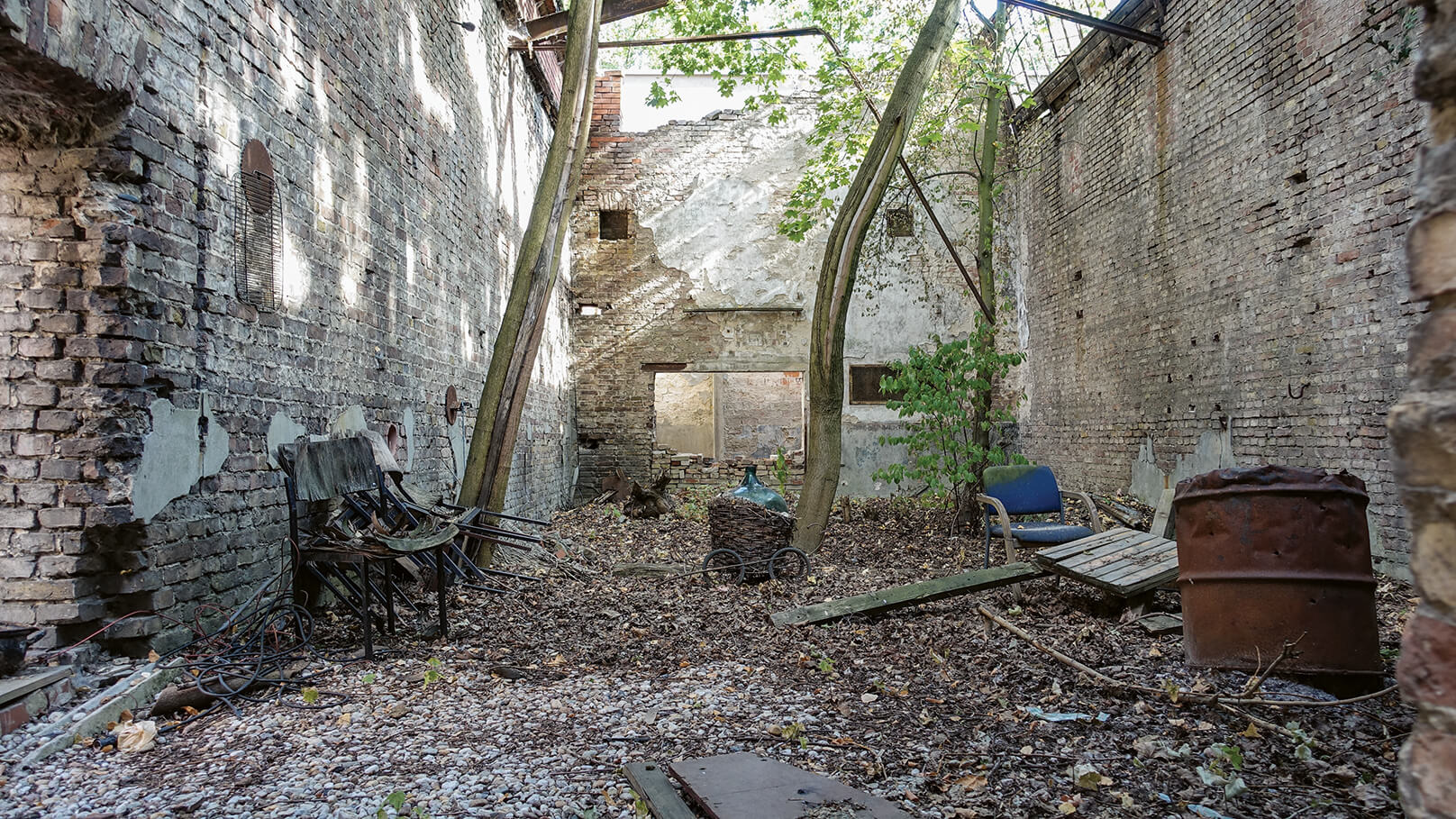 Seen through the eyes of a curious flâneur, this part of the city has simply been annihilated. 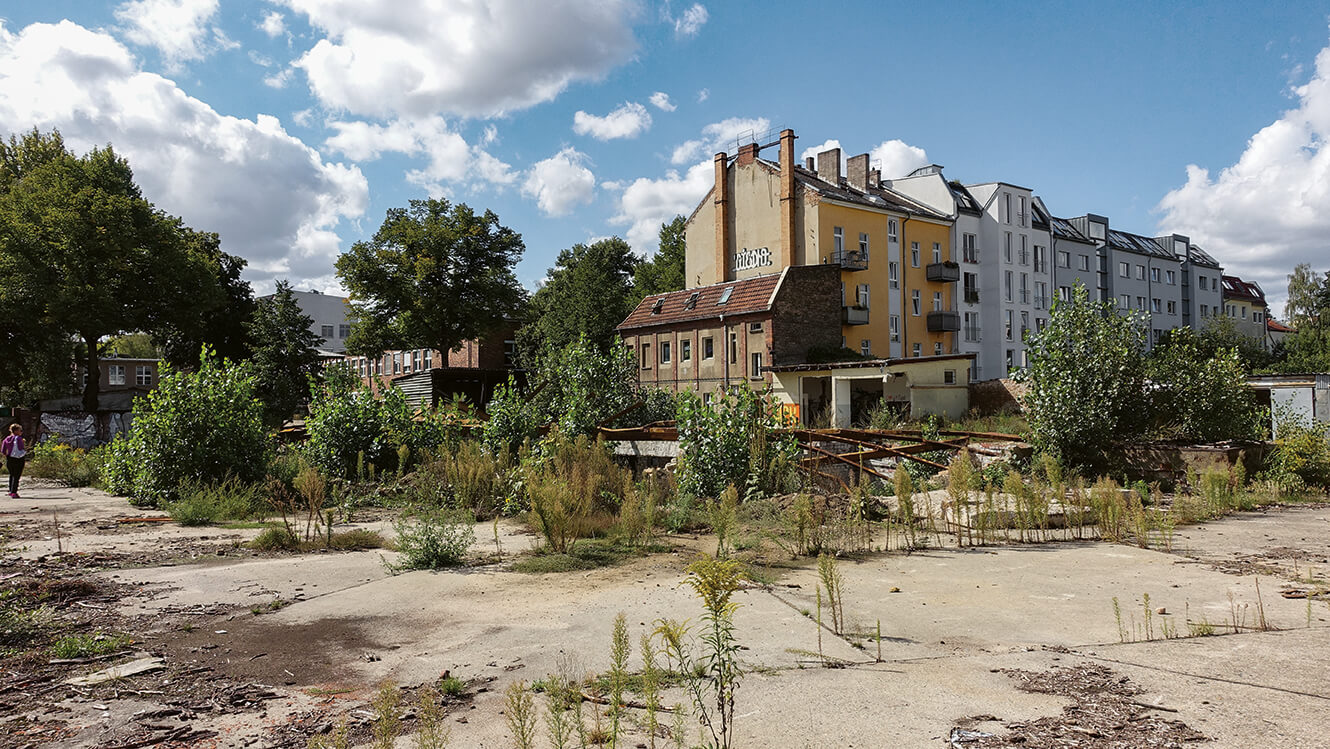 And when you go to the countless new residential areas, the aura of a new beginning is nowhere to be seen. The new homes are functional and provide the nouveau riches who own them with all the comforts of a modern living space. There is underfloor heating, green electricity – ideally from the building’s own plant – and a shared laundry room for all residents. The children can play on a playground in the courtyard, surrounded by imposing fences. Well protected from the outside world.

However, these neighbourhoods add no value for the community. Their architectural design lacks inspiration and has no cultural or social function for the locals. The reasons for buying one of these Lego-Ikea-Biedermeier style flats are manifold, and at first sight it may even seem like a sensible decision. However, all of us should realise that there will inevitably be consequences for everyone when a city that used to be a place of flat renters becomes a place of property owners. It alters the way people see the city. The city that they now own a small piece of – after paying a lot of money for it. They may be tempted not just to buy property as a way to solve their own housing problem but also as a way to make money. As they proudly show off their floor-to-ceiling windows, they cannot hide their relief that they have also provided for their old age by making this investment.

It may well be possible that I suffer from the typical narrow-mindedness of my generation or am simply too impatient. Maybe we will see the examples described above transform themselves into vibrant neighbourhoods over the next few years, and a new generation of Berliners who show their solidarity with others will be living in them. And maybe some of the buildings denigrated by me today will be praised by architecture critics in the future. But until that happens, we may be allowed to have our doubts. 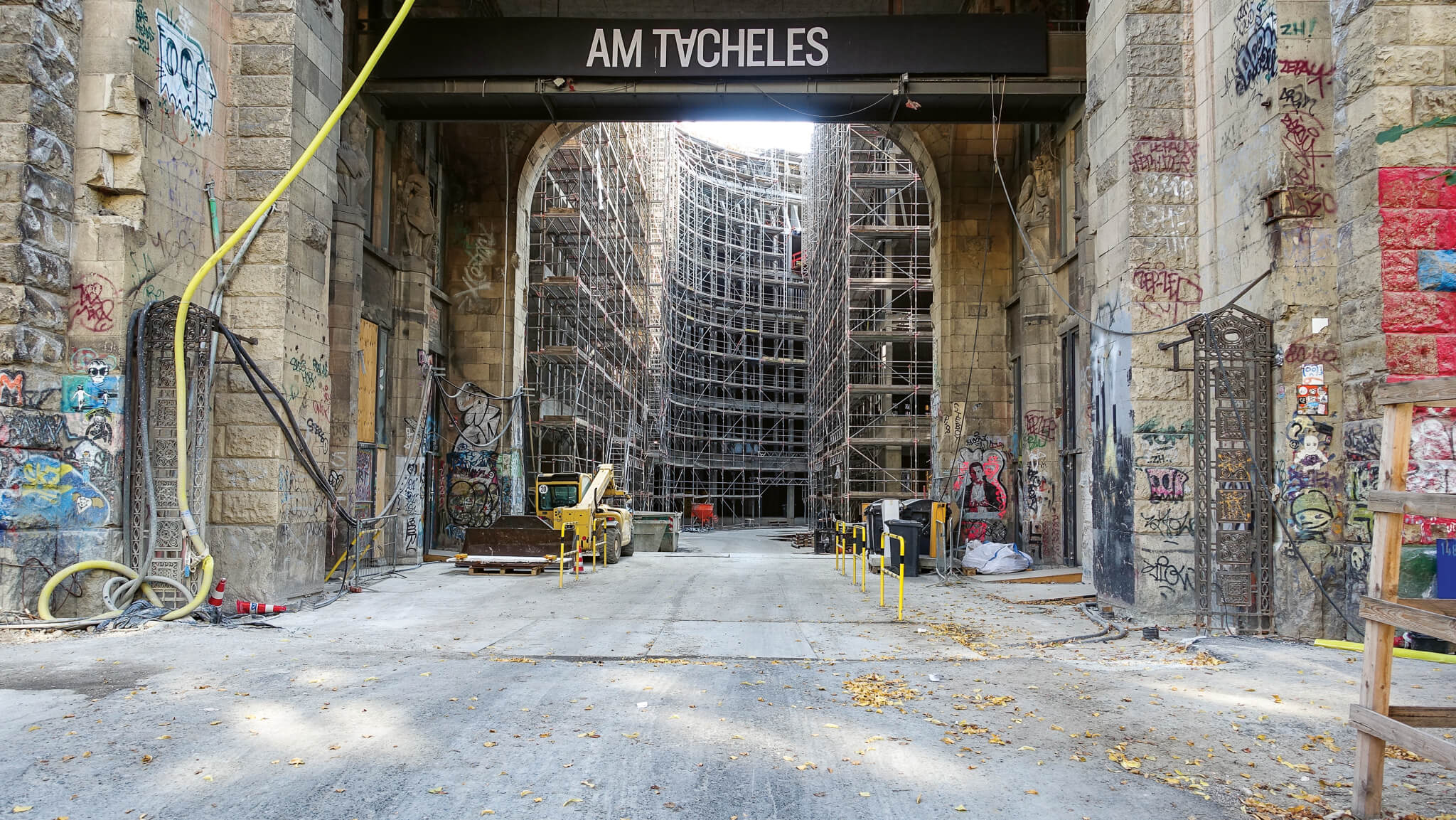 The aura of a new beginning is nowhere to be seen.

But there is also resistance. The citoyens have woken up from their spellbound slumber. The hedonists of the post-reunification era are gradually becoming aware of their responsibility. Policymakers have discovered the topics of fair rents and liveable cities. The Tempelhofer Feld is still undeveloped. A broad alliance made up of neighbourhood initiatives and activists fighting for lower rents regularly organises Stadt für Alle (“The city is for everyone”). The call for a referendum on the issue of Deutsche Wohnen & Co. Enteignen (“Expropriate the Deutsche Wohnen property group”) is winning more and more support among the middle classes. As this book is being published, the initiative is heading into the crucial phase, having collected more than 350,000 signatures***.

The Senate of Berlin has rediscovered its preemptive right to buy properties and is supporting major participatory projects such as the remodelling of the former House of Statistics on Allesandersplatz. And the rent freeze for Berlin sent out a strong message that was heard far beyond the city limits. Although the Federal Constitutional Court revoked the Berlin law, the need to regulate the development of real estate prices, which are spiralling out of control, was underlined.

Organisations that work for the common good are being founded, like the Stadtbodenstiftung (Community Land Trust). Investigative initiatives such as Stadt von Unten (city from the bottom) or Bizim Kiez (Turkish for “our neighbourhood”) want to raise awareness and mobilise against the unchecked selling-off of the city. And then there is the example of the collective association around a local pub called Syndikat as an act of protest against their forced eviction. They initiated the campaign Wem gehört die Stadt? (Who owns the city?) and thereby stumbled across a whole network of brass plate companies that, between them, had carved up huge property portfolios, largely unnoticed by the public. 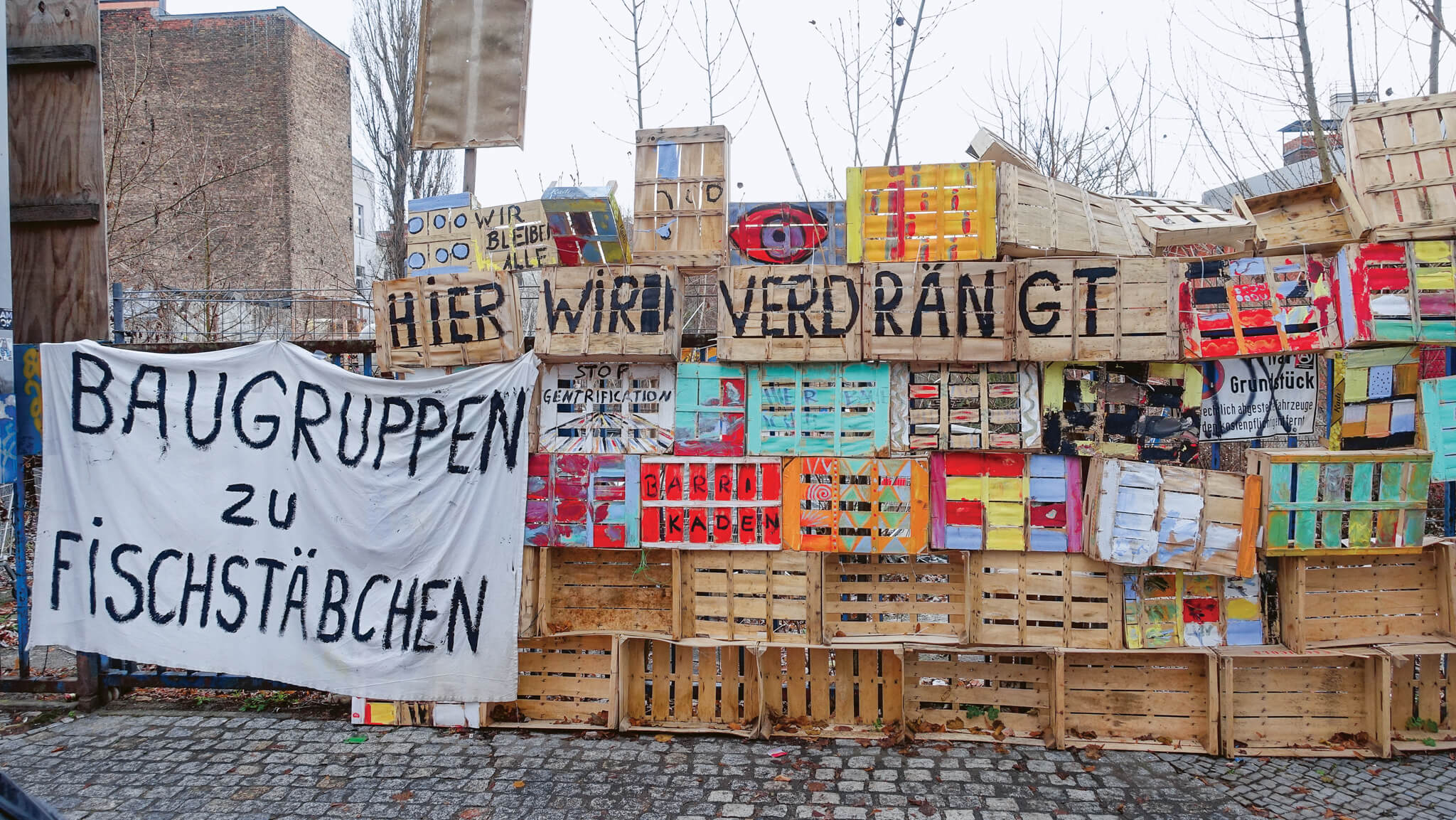 The Holzmarkt development is providing a new home for at least some of the utopian ideas from the 1990s. A new generation of climate activists is mobilising support, with growing success, against the expansion of the A100 urban motorway, and for a liveable, fossil-free city.

The archive of the Vanishing Berlin project now contains more than 12,000 photographs. More than 60 per cent of the motifs I published in my first book Vanishing Berlin – Documents of Transition 2009-2016 have meanwhile disappeared. But there is still a lot to be discovered. Berlin remains defiant and ever changing. Now that all of Berlin Mitte has been “sanitised” and fully redeveloped, the cultural avant-garde of Berlin has moved on to Rummelsburg, Oberschöneweide or Lichtenberg. Today’s hipsters are looking for happiness in Weißensee or Wedding instead of Prenzlauer Berg or Kreuzberg.

I usually find the motifs for my photos in unimportant backstreets where time seems to have stood still and that you only discover when you have no special place to go. In the backyards of houses in former working class neighbourhoods that today are almost as quiet as a sleepy village. And along the main traffic routes where few people care to walk. On the few remaining brownfields or in the extensive industrial estates in former East Berlin. 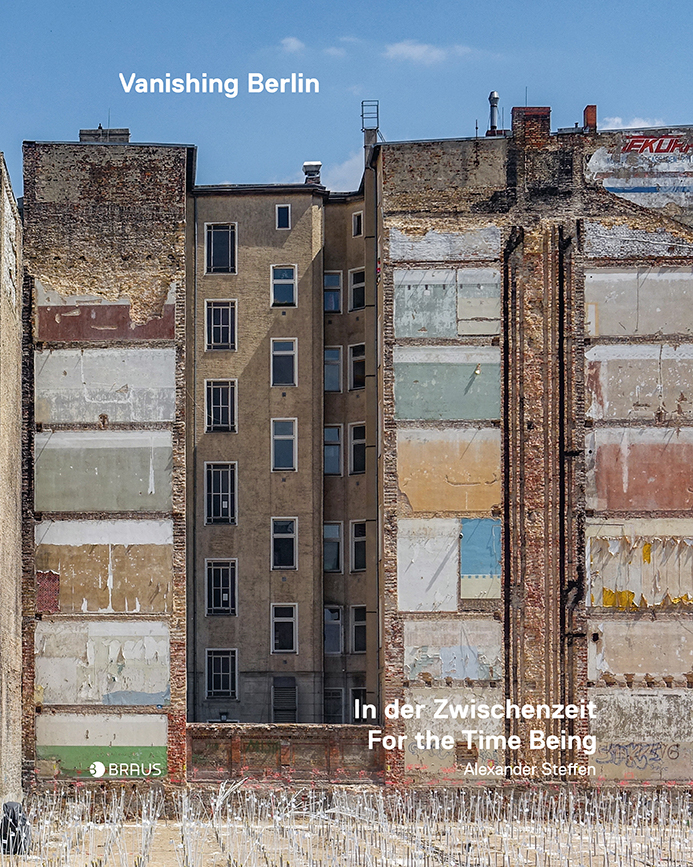 With a bit of luck, my gaze starts to wander during my strolls, sweeping across a sea of windowless firewalls, rust- or sand-coloured bricks, semi-modernised tenement houses with stable blocks and garages, and indestructible industrial buildings with chimneys, discreetly decorative tiles and faded signs on the walls.

At the same time, I look at the city as if I were looking at an oversized billboard. Graffitis, calls of protest, street art, shop signs and advertising slogans are everywhere I look. These frozen moments in time are also what make the places come alive. They are images of both the transient past and the present reality.

In exploring Berlin as a photographer, my motivation was to capture the soul of the city. This book is an invitation to follow in my footsteps during this search. It is dedicated to all the people who want to see the common good placed at the heart of the city’s transformation.

Future has no landlord! says a graffiti on the wall. And I ask myself: Where else, if not in Berlin?”

Vanishing Berlin – For the Time Being is available now from Edition Braus. This text is an excerpt from the book and was written by Alexander Steffen in August, 2021. Follow Alexander on Instagram and for more information on the project check out the website. 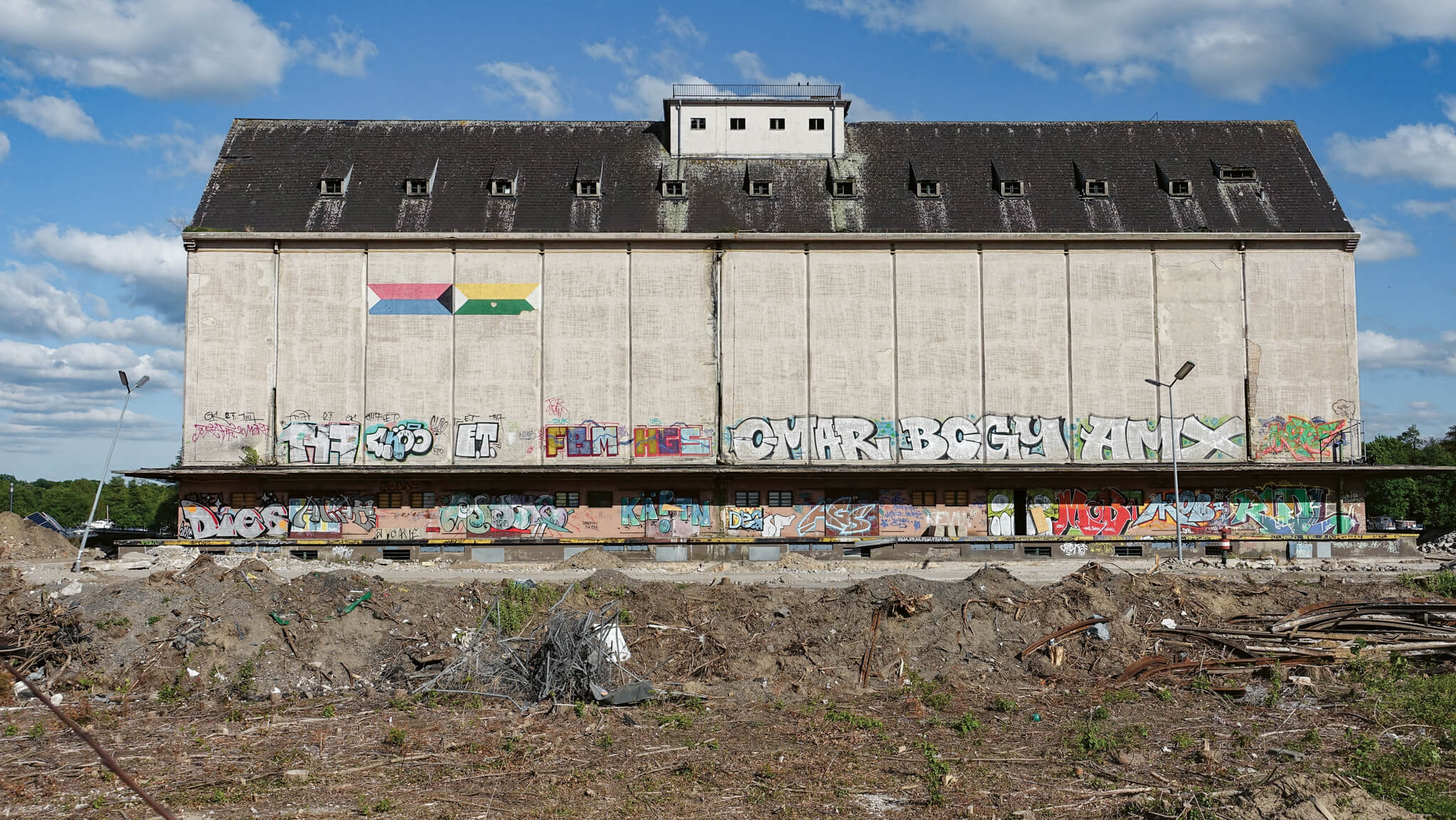