Documenting the Changing Face of Berlin 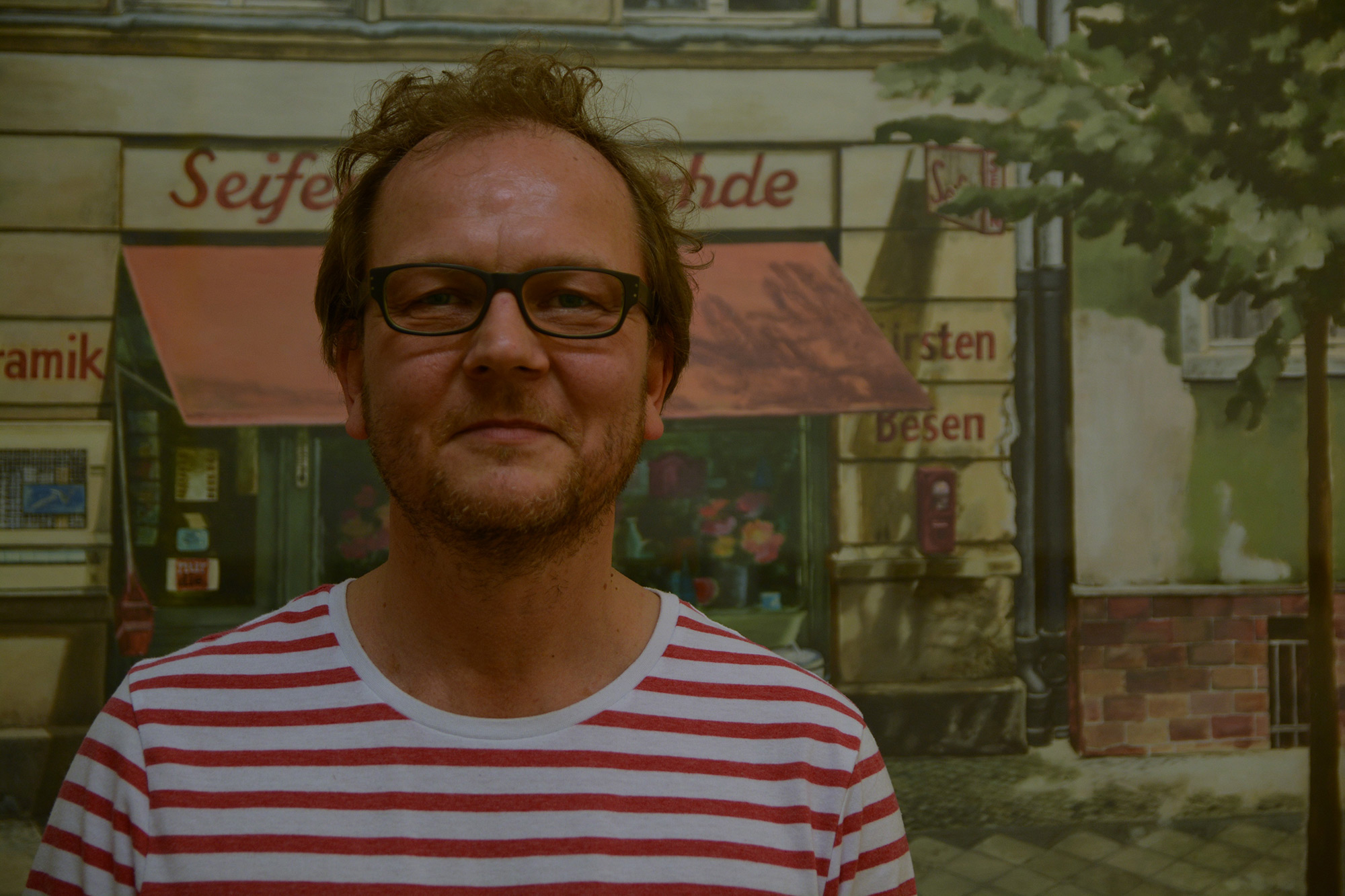 Blink and you’ll miss it. That’s how quickly Berlin is changing. It’s a city that is addicted to construction and facelifts. On every street there is scaffolding, cranes, and other signs of constant renovation and renewal. In amongst this hubbub, all manner of beautifully aged artefacts are disappearing. Antiquated shopfronts, barren and serene wastelands, crumbling walls – all of these things are evaporating. But there is someone who has made it their mission to capture these images of passing time before they disappear forever.

Alexander Steffen’s interest in photography was ignited when he was just a small child, at first using a Polaroid camera, and then the wonderfully termed Kodak Ritsch Ratsch Klick simple automatic. Since then, he has continually taken photographs as his passion. Now it has lead him to the verge of publishing his first book, Vanishing Berlin, a collection of wonderful images that perfectly crystallise the city’s changing character. 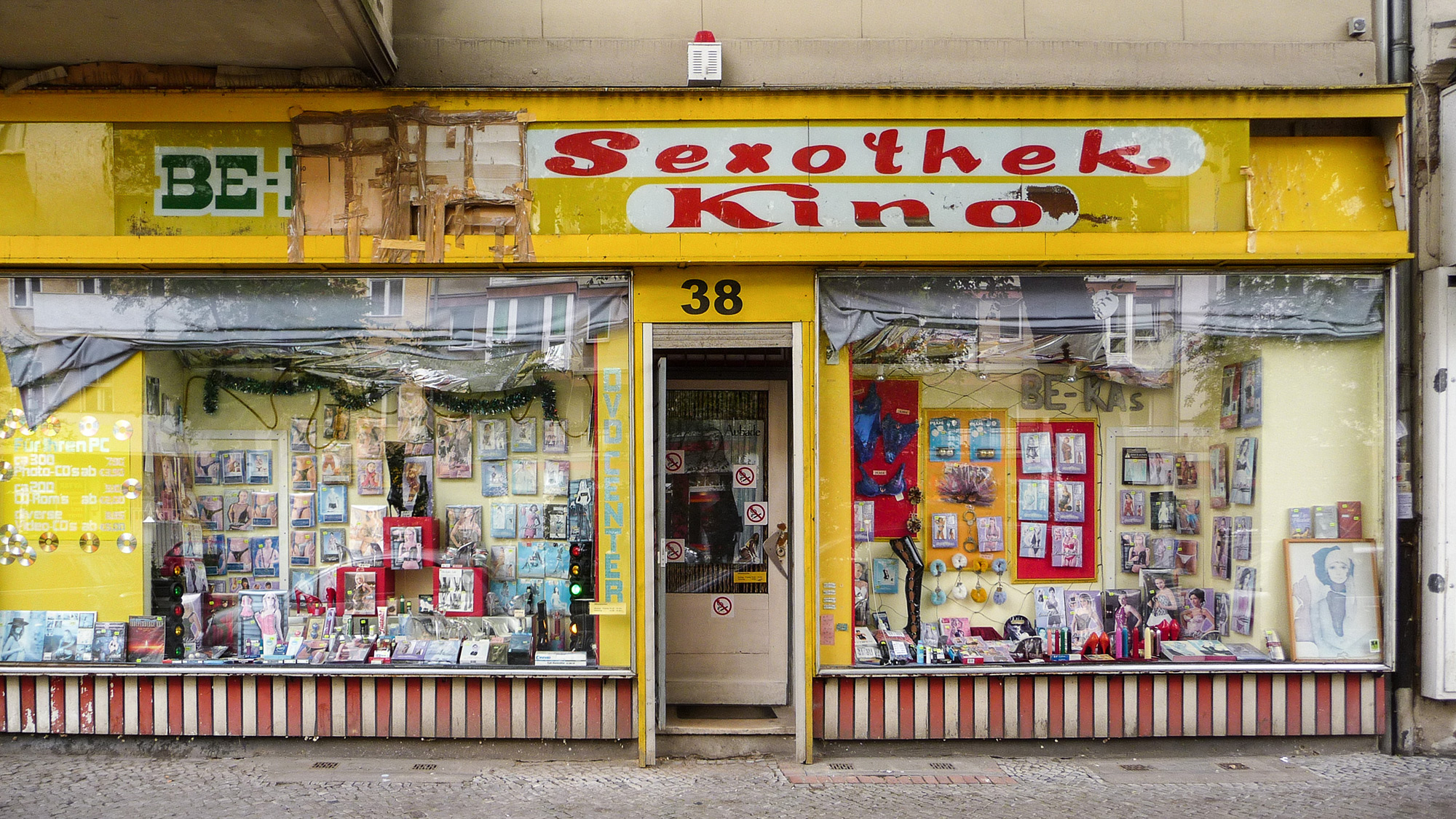 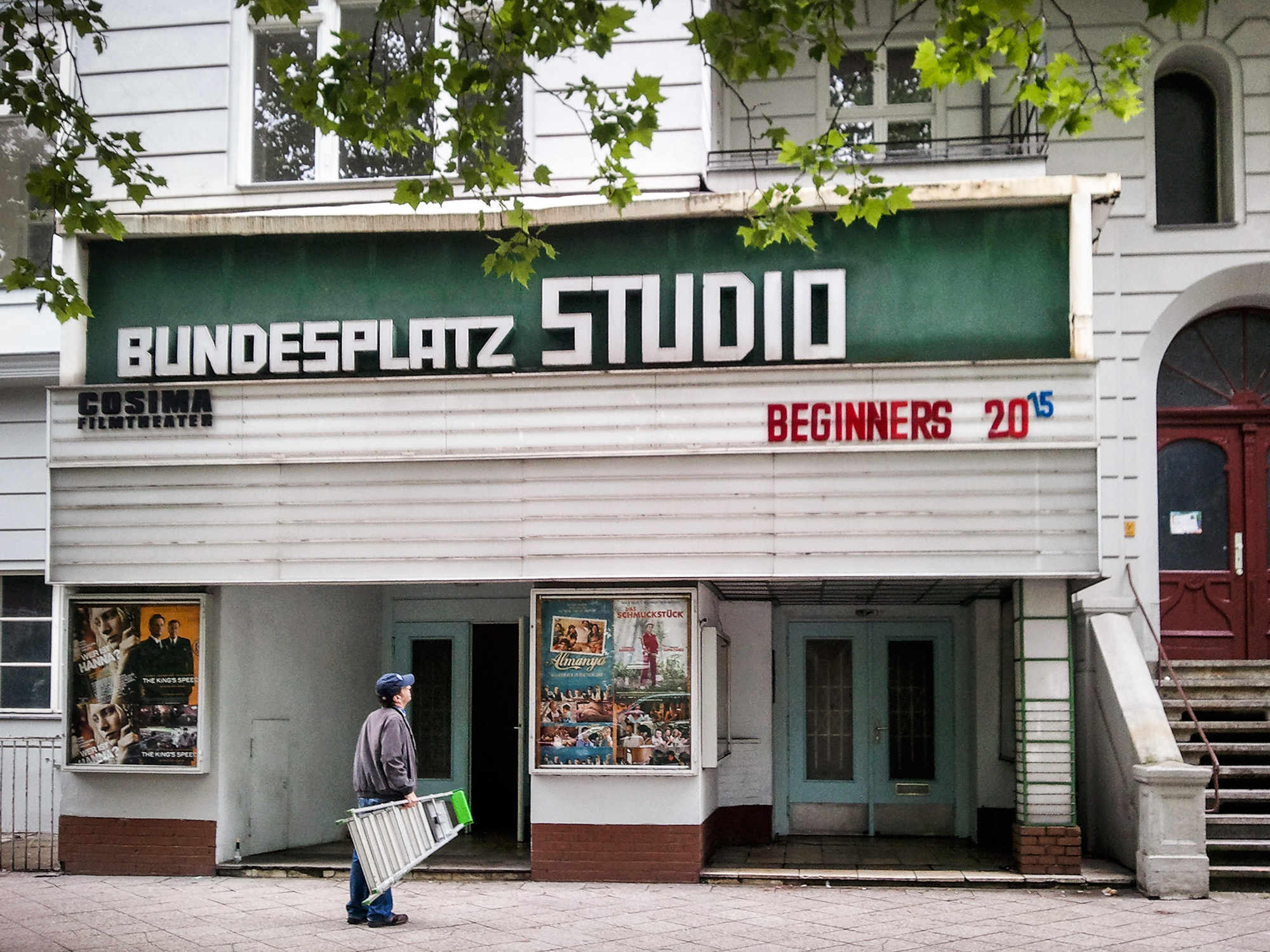 It wasn’t just Alexander’s passion for photography that originated at this time, but also the roots of the thematic concepts that he was later drawn to, and that his current oeuvre is built on. As he reveals: “The whole work has different aspects, but one is tracing the routes of my childhood and my wasteland fascination. When I was a kid the whole city was a wasteland and this was just my normal playground. It was a big adventure to stroll around, breaking into the old embassy buildings. You could sneak into them, and they were more or less as they were when Germany got saved by the allies. They didn’t do anything until the late ‘70s and mid-‘80s, and this was pretty much what I did when I was a child.”

This fascination with wastelands and derelict buildings was compounded during a trip to New York in 2008, when Alexander found himself drawn to photographing the storefronts and brick walls of the metropolis. On his return to Berlin, he was sitting at a restaurant near the waste ground at the foot of Cuvrystraße in Kreuzberg. When looking up at the huge wall with the world famous mural by the graffiti artist Blu, an idea struck him, as he explains: “When I was I sat there and I took a look around it just clicked. I thought, ‘Why travel so far? Why don’t you start in your own city?’ I realised that what I am interested in is present in Berlin, and that this is a time when it’s really urgent to document, because the process that had more or less already happened in New York was still happening in Berlin. Brooklyn is still kind of rough, but if you talk about Manhattan it’s gentrified already. There is not so much left if you compare it to the ‘70s or ‘80s. It was a very dirty and kind of dangerous city, and it’s not anymore.” 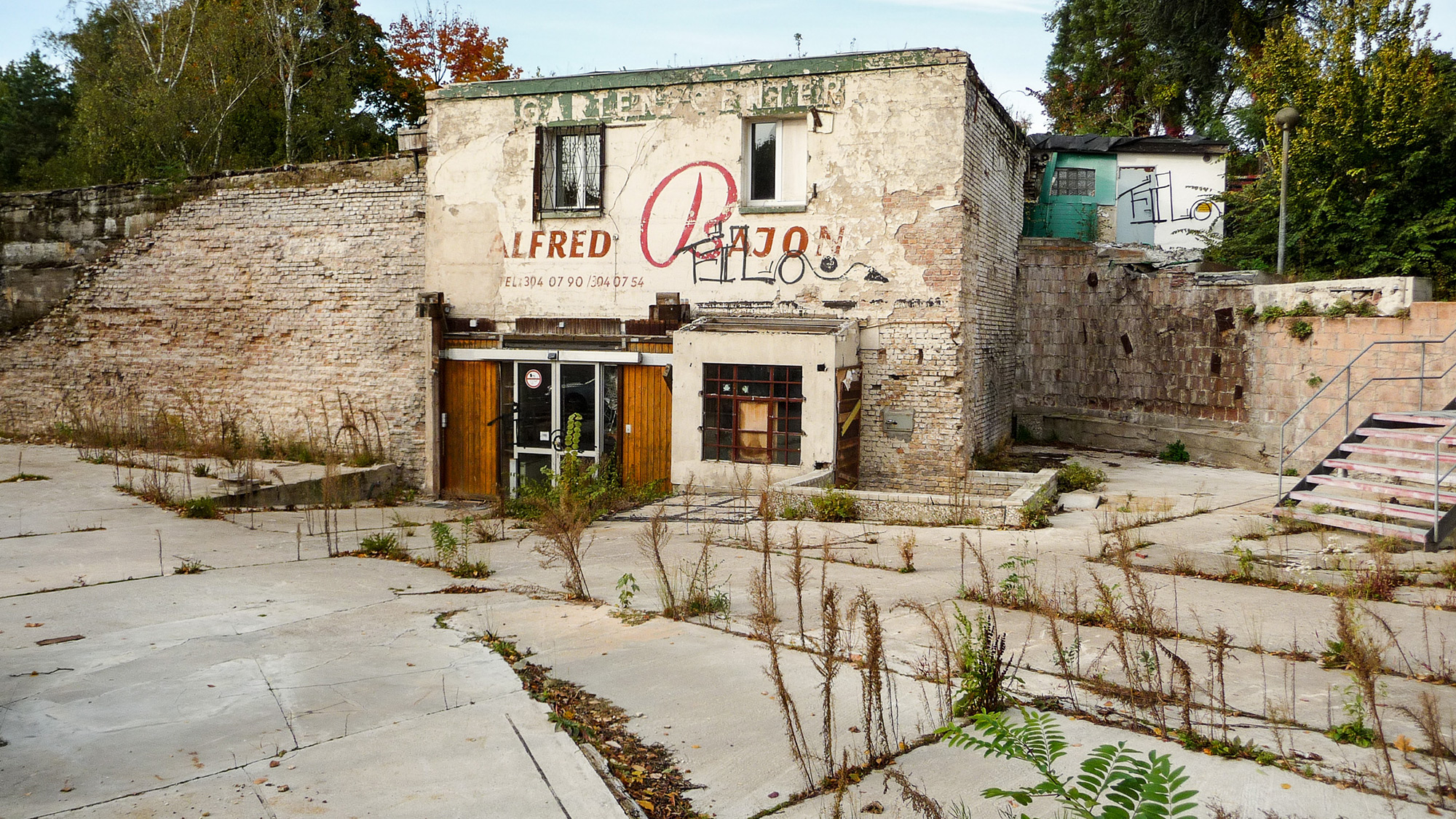 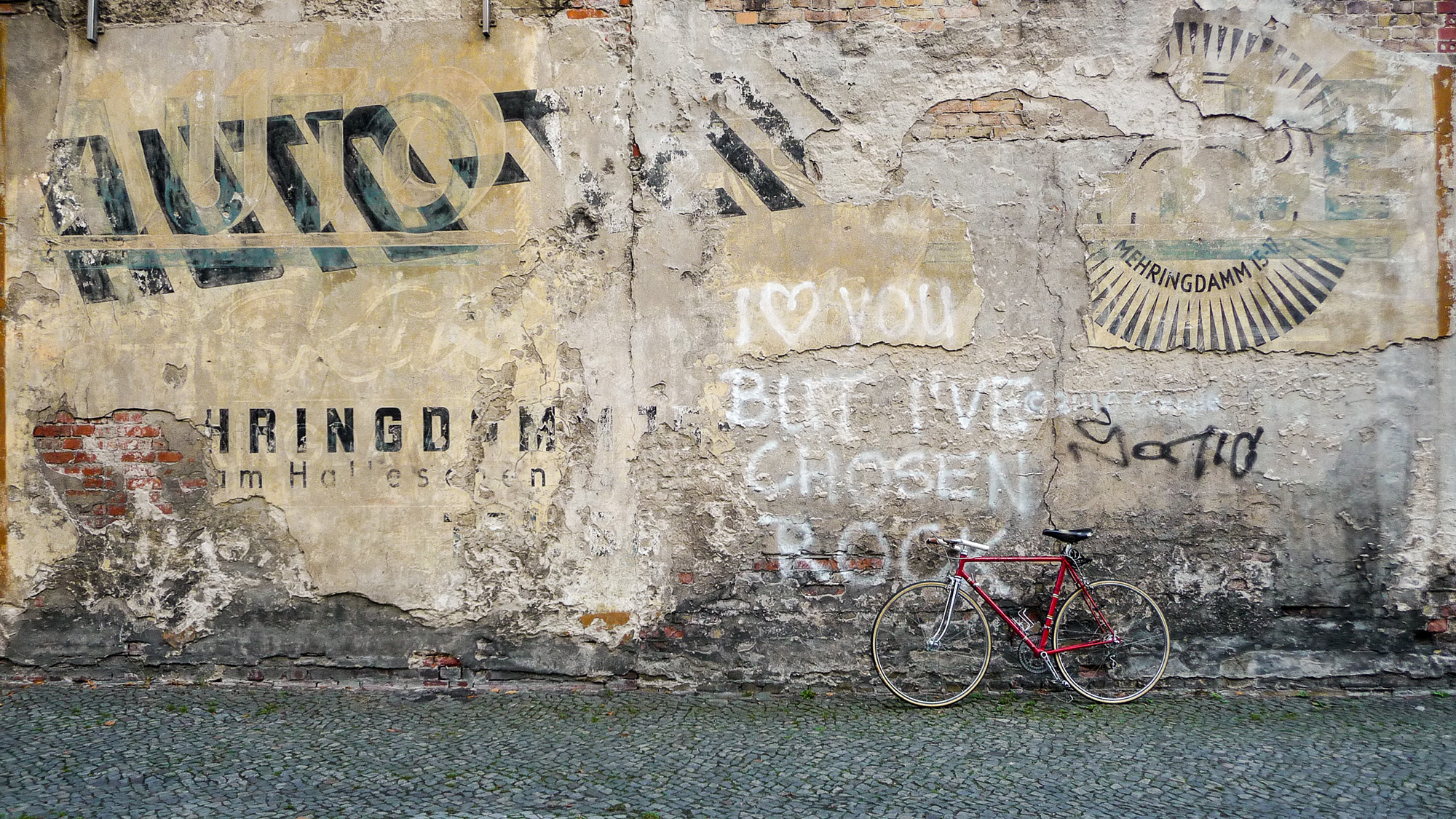 In the beginning, Alexander just started taking pictures by chance, carrying a little digital camera with him when he walked somewhere and snapping what he came across. Then in recent years he started to plan it more methodically, travelling to areas of Berlin he had never been to before to keep discovering new things. “It’s what I really love about the city. I’m almost 50 years old and despite having moved apartment 12 or 13 times, there’s still many areas I’ve never seen. It gave me a reason to relocate in my own city, to go to very random streets in areas where you would normally never ever go. This is what I like. I take my bike, I take my camera and then I am really totally focused on finding new images and new places, and trying to make good pictures.”

There’s another key reason why he has started to plan out the photographs – the speed at which Berlin is changing means what is there today might be gone tomorrow. “It’s hard to believe, but I would say when I began this project the city was still very slow. I think the property was sold already, but they didn’t start building. They waited for this immense boom we face right now, where rents and property prices are skyrocketing like crazy. So in the early days you could see something and say, ‘OK, I’ll keep that in my mind and one day if I have time I’ll go there and take a picture’, but for the past two or three years, you don’t have time to wait. You have to be very quick, you have to get on your bike the next day and you try take the picture before the big cranes come.” 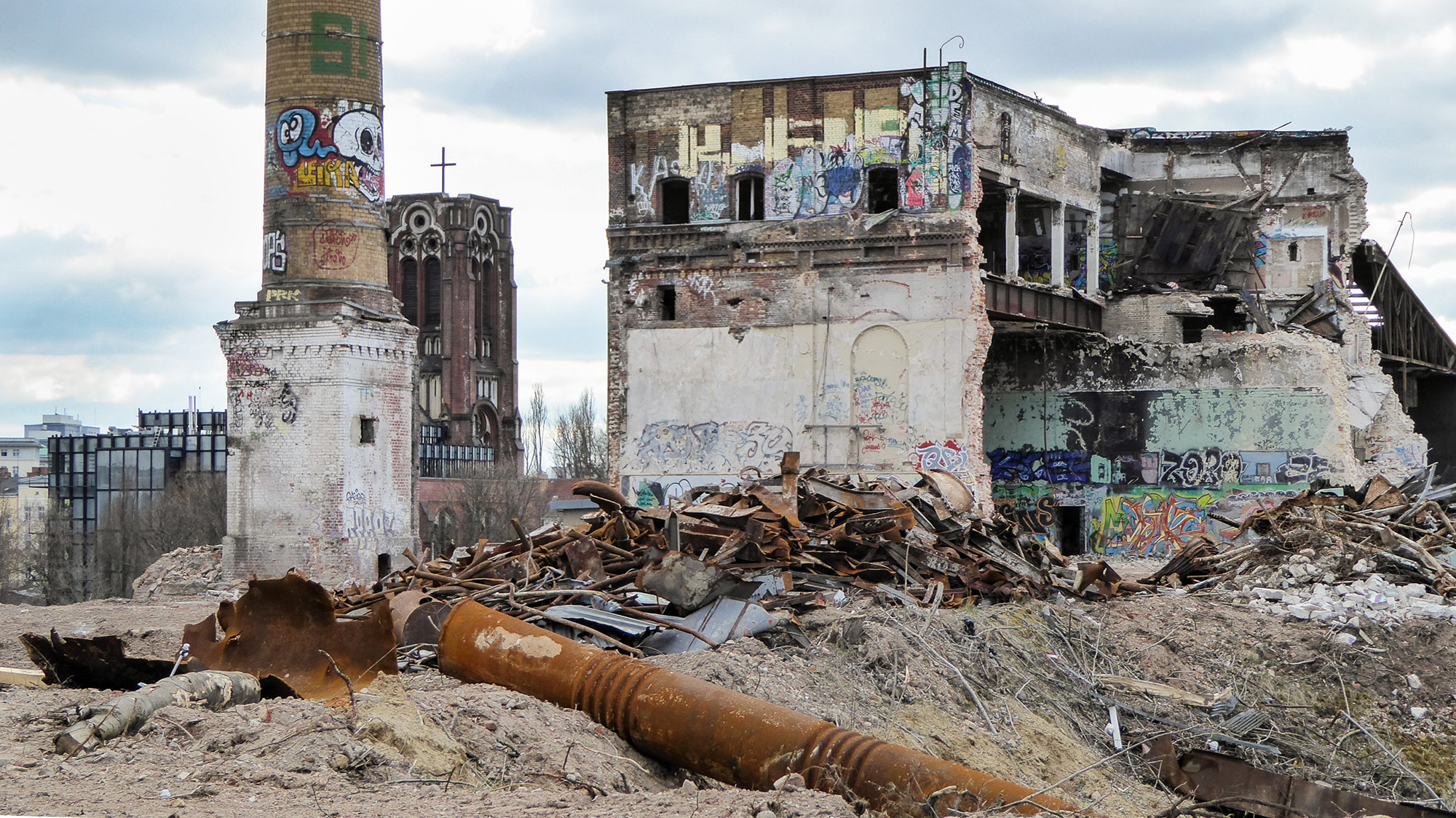 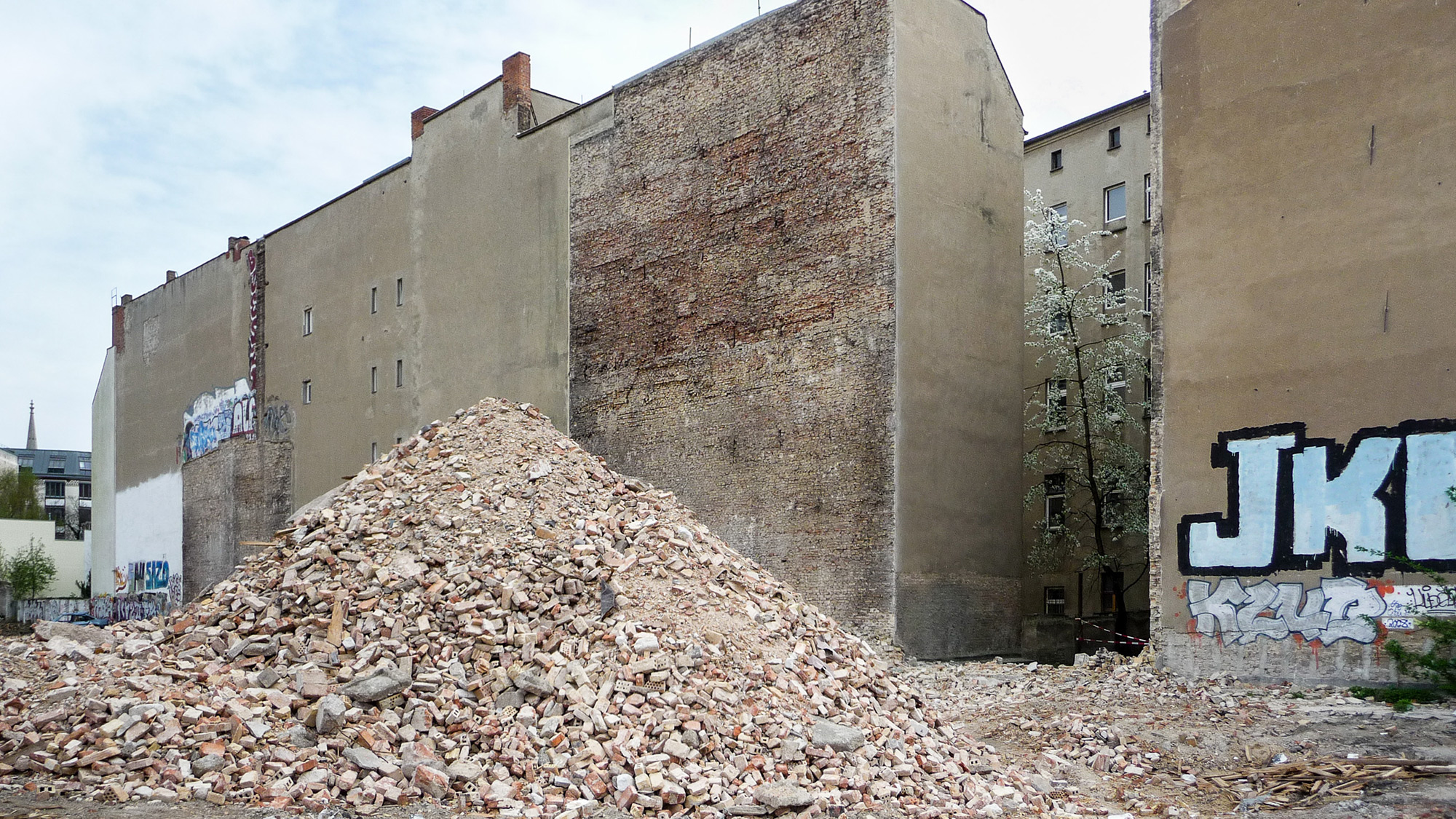 And the big cranes have been coming at an alarming rate, with a huge number of locations disappearing already. Alexander hits the point home. “The prototype of the book is a year old, and I would say 20% of the places pictured have vanished since then. It’s really crazy. More or less once a week you see something or you hear something where people tell you, ‘Well this is gone, this is gone, they’ve started building here and there’.” He’s quick to point out that he’s not saying this is a bad thing per se: “I don’t want to get misunderstood, of course I don’t want to say everything should stand still, a city has to move on and you have to build buildings, and of course this is normal. But the question is: who is building what and for whom?”

Even though Alexander is documenting moments in time, he doesn’t want to be seen as a historian, in fact it’s quite the opposite. “I want to be contemporary, I want to show what’s going on now. I don’t want to present something from the past. People often think that the pictures are really old – 20 years old, 30 years old – but they are not, some of them are two years old or three years old. Some people say, well you have to wait for ten years and they get more and more valuable, but I think I like the idea of being contemporary.”

Below is a selection of some of Alex’s favourite images from the series, accompanied by explanations of why they have a special meaning for him. Birkenwäldchen | Birch Grove. Kurfürstenstraße, Schöneberg, 2014.
“This is one of the most mysterious places of my neighbourhood. It is opposite of the original Café Einstein where my father used to have his afternoon coffee at a table which was under permanent reservation for him. Rumors say that this small grove belongs to Poland. As long as I can remember this fenced place remains untouched. Seasons and fashions come and go, the only thing that changes here is the colour of the leaves. Today the wasteland one block down the street is already a construction site.” 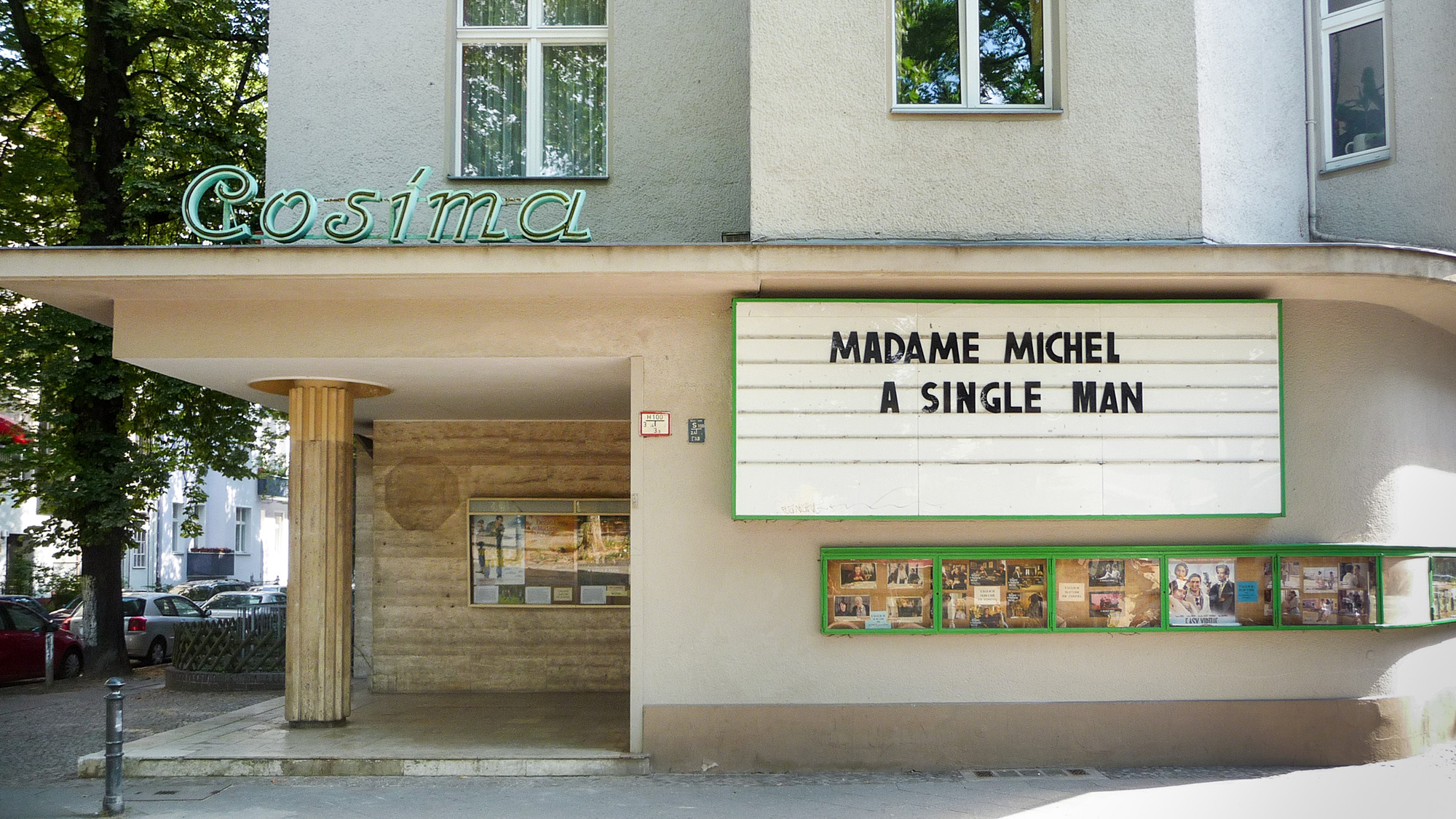 Cosima Kino | Cosima Cinema. Bundesplatz, Wilmersdorf, 2010.
“This beautiful neighbourhood cinema (Kiezkino) is still up and running. It’s close to the high school I went to. I came here frequently as a teenager. I remember watching The Night of the Living Dead all by myself, with only one other guy with me in theater, sitting just behind me. It was spooky.” Fassade | Facade. Leuthenerstraße, Schöneberg, 2009.
“When I moved to this area called ‘Rote Insel’ (‘Red Island’) in the early 1980s, this spot used to be a simple corner pub. I knew how to manipulate the pinball machine so I could stay there for hours without spending much money. Later it became an ice cream parlor called ‘Eisflocke’.” 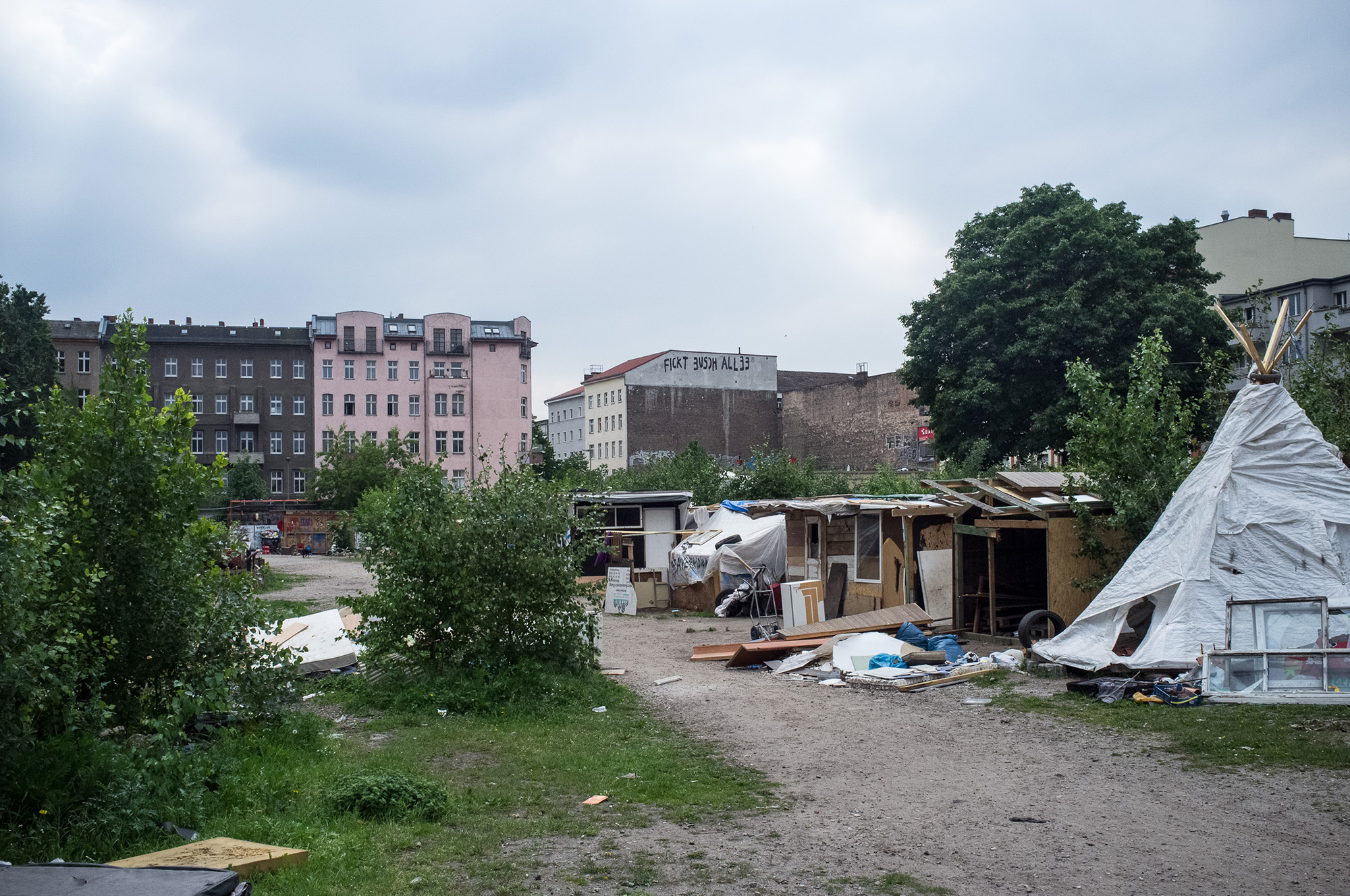 Brache | Wasteland. Cuvrystraße, Kreuzberg, 2014 .
“The last remaining large wasteland in the centre of the new hipster district between Kreuzberg and Friedrichshain. It was claimed to be the space for the temporary BMW Guggenheim Innovation Lab in 2012 but in the end they didn’t have the guts to put it into action. After that it was occupied by refugees and dropouts to build Berlin’s first favela. For me there is hardly any other spot in the city that is more politically charged.” 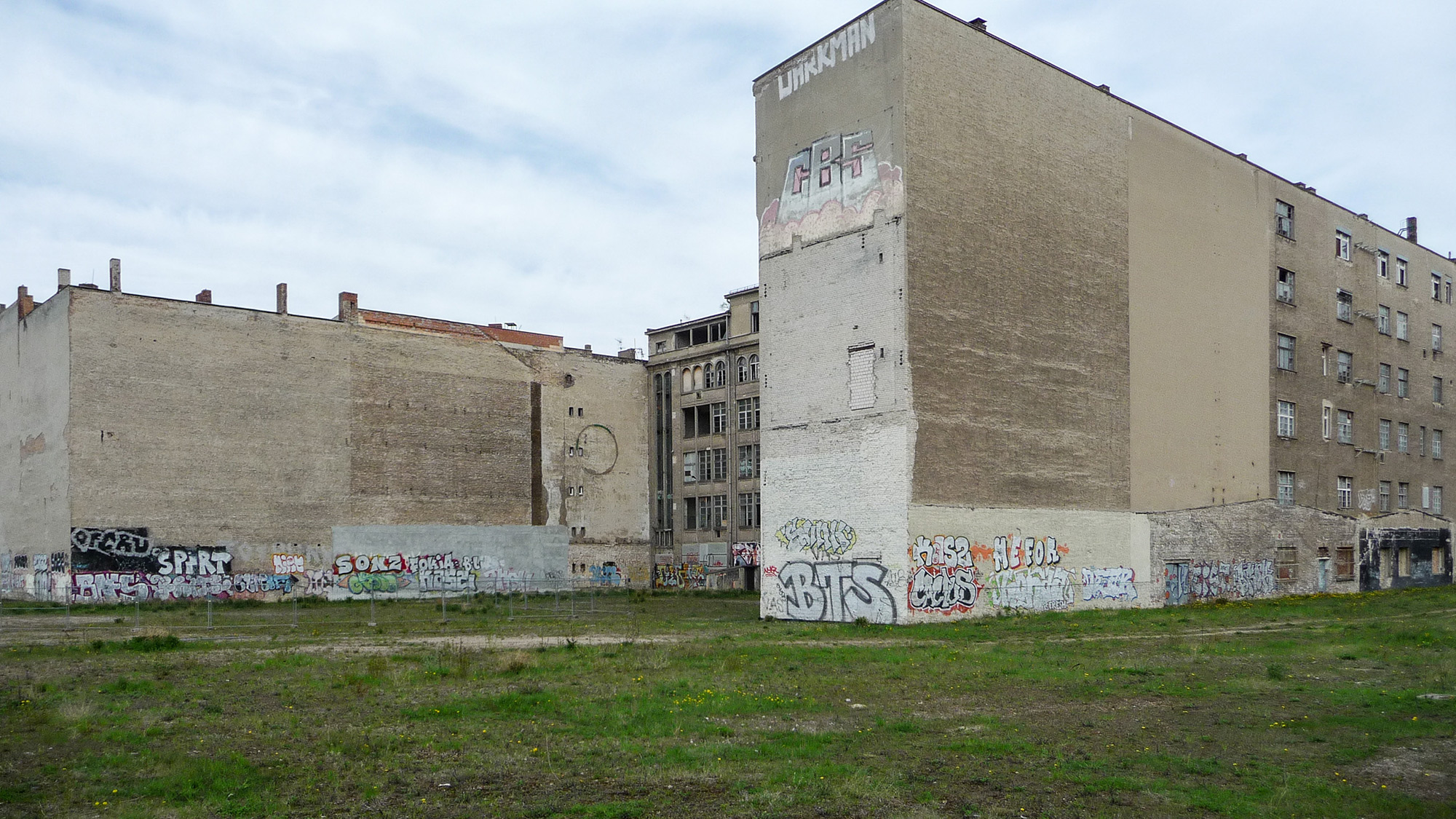 Brandwände | Firewalls. Chausseestraße, Mitte, 2013.
“This was probably the most beautiful wasteland of the city, one of the few one should have protected as a cultural heritage. Today Daniel Liebeskind is building the Sapphire luxury apartments. Who wants to live in a noisy street facing the massive new central of the Federal Intelligence Service for 6.000€+ per square metre? It’s already sold out.” Korsett Engelke. Kantstraße, Charlottenburg, 2011.
“This used to be my favourite neon sign and an insider’s tip for lovers of any age. The shop still exists but it moved up the street to a smaller place. Luckily the beautiful sign got saved by the Buchstabenmuseum Berlin.” 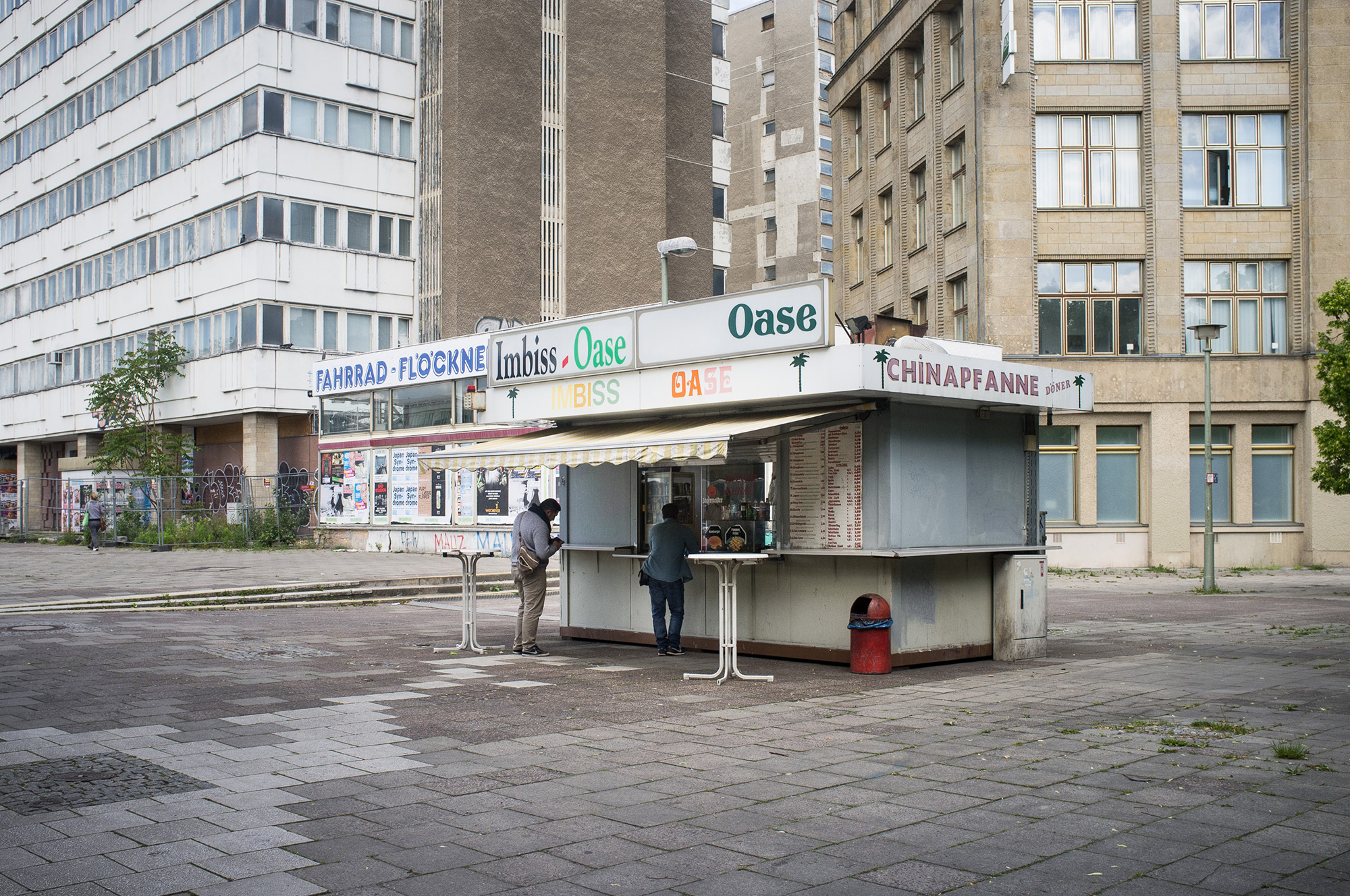 Imbiss Oase | Snack bar Oase. Alexanderplatz, Mitte, 2012.
“Located on the six-lane road Karl-Marx-Allee. A brave counterpoint to the shopping franchise fast food overkill on the other side of Alexanderplatz. I never tried the ‘Chinapfanne’ (‘Chinese noodles’) but I have to smile whenever I pass by.”