After the pandemic-induced cancellation of the Christopher Street Day Parade in 2020, the largest LGBTQ+ parade and protest in Europe made a glorious return this year, albeit in a slightly different form. LOLA was there to soak up the atmosphere, take part, and document the day.

In a non-pandemic CSD event there would normally be a large number of trucks and floats from a wide variety of organisations. The fact that some of these trucks were from giant commercial companies and brands has sometimes led to criticism and accusations of rainbow-washing. Regardless of what side of the argument you fall here, there is no denying that in a normal year the CSD Parade is huge and all-encompassing. In contrast, this year the parade was limited to five trucks, all of which were the same, and none of which were heavily emblazoned with commercial branding or slogans. The result was a parade that felt different, yet somehow closer to its roots. 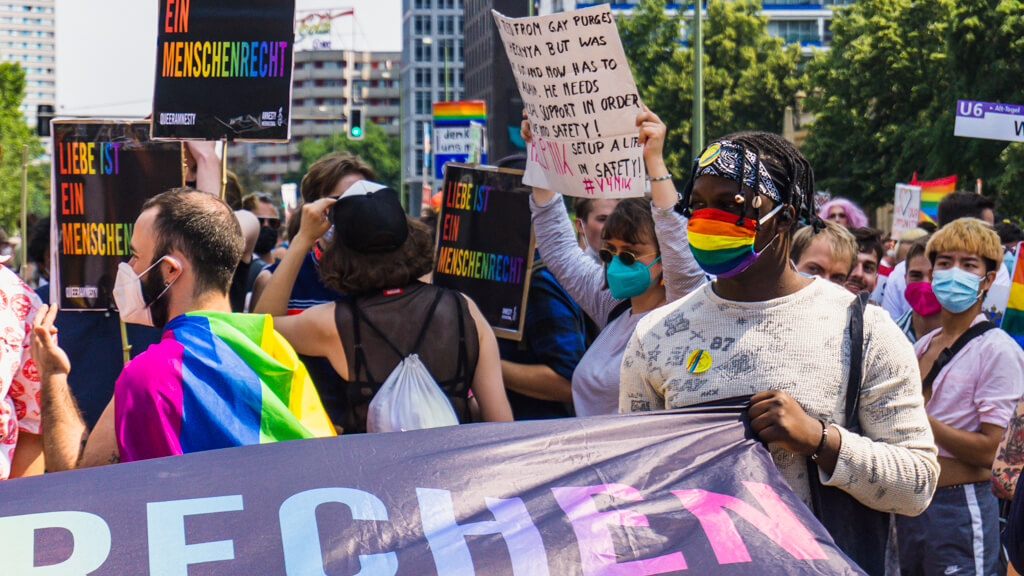 Right from the start, the CSD organisers were vigilant in ensuring that people adhered to the Corona regulations as much as possible. A recorded announcement was periodically broadcast from the trucks to remind everyone to keep distance and wear masks, and CSD representatives on the ground routinely personally approached people to get them to mask up. Even better than this, on numerous occasions performers and speakers from the trucks would take the mic and single out people who were not complying and tell them to put a mask on. Being told off by a powerful drag queen in front of everyone for not wearing a mask is a very effective way to get people to fall in line. With there being fewer trucks this year, it felt like more people were willing to follow the trucks and be part of the protest and parade rather than just watch from the sidelines. In our opinion, this was the best way to experience the day. Whereas in other years watching the parade go by and enjoying the performers, people and music from each truck was a good way to get a taste of the day, this year the best way to experience it was to pick a truck and follow it. Walking alongside everyone gives a feeling of community, solidarity and pride, which are some of the most important aspects of the day. At the beginning of the parade and towards the end there were powerful speeches from a range of speakers in each truck. It’s always worth remembering that Christopher Street Day is a protest first and a party second, and the speeches were strong rallying cries for everyone to stand up and fight for the rights of the LGBQT+ community both in Germany and across the world. Of course, there were moments of celebratory party atmosphere. Hearing music blasting through a sound system and dancing with other people around, in the sunshine and the open air, is an experience that many people have been starved of for more than a year. We lost count of the number of times we heard strangers exclaim things like ‘This is amazing!’, ‘How good is this?’ and ‘I’m so happy’. It felt surreal and special, like coming up for air after being underwater for too long a time. The weather couldn’t have been better – it was the ideal condition for people to show off their best outfits and their best selves. The rich tapestry of queer life in Berlin was on display. An estimated 65,000 people took part in the day, and while at times the scale was almost overwhelming, it ultimately felt like an important moment of unity and togetherness, which is something we all need right now.

For more information about the CSD Parade visit their website.