The Amazing Views of Berlin From Above 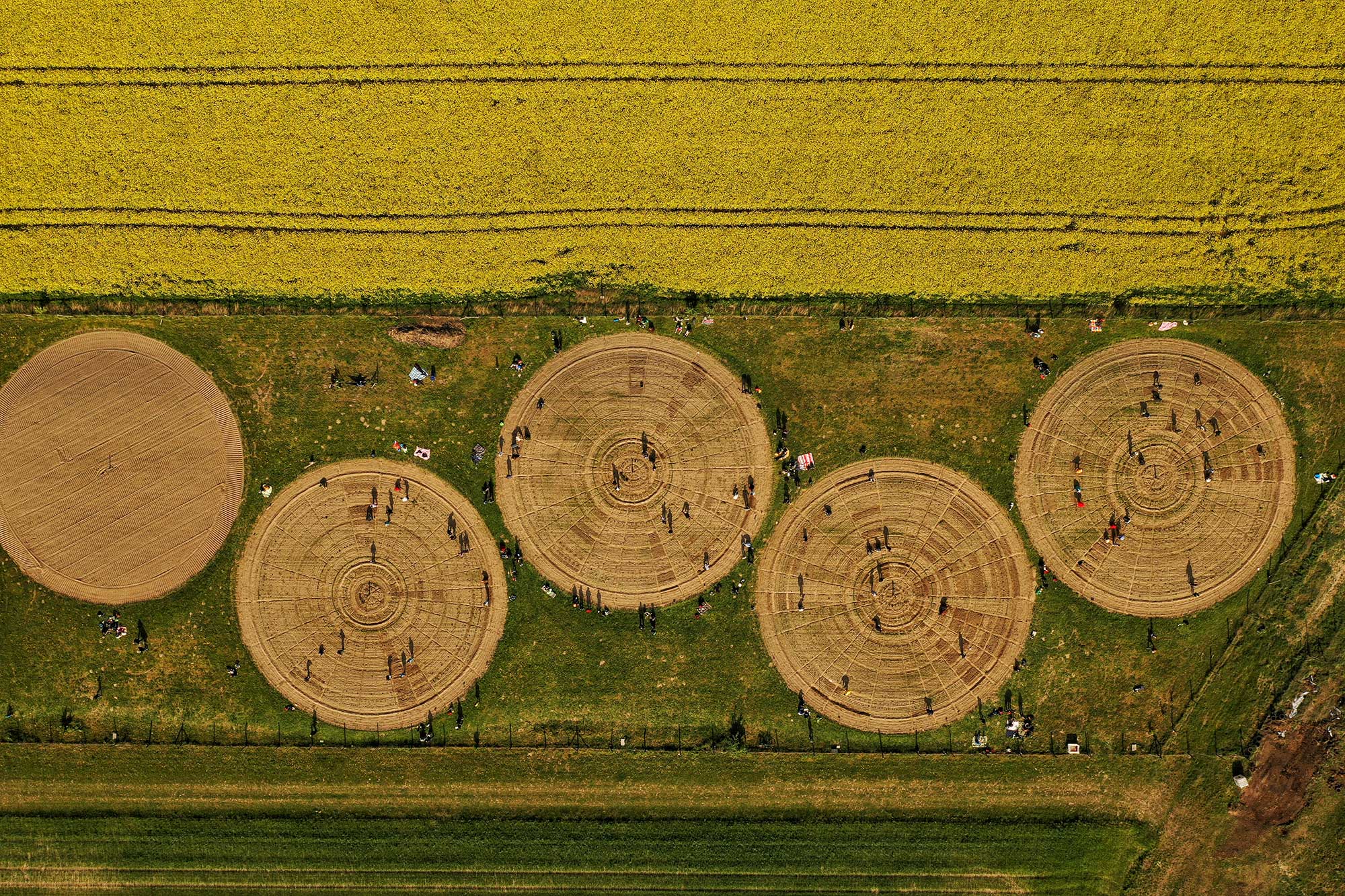 Volker Gehrmann, aka Karacho, uses drones to take aerial photographs of Berlin’s pools, parks, events, urban gardens and beyond. Seeing the city from this perspective is a trip. We spend so much time down on the ground that we never stop to think what it must be like to look down on everything from above.

From the sky above, architecture and nature take on surreal shapes and forms. Dog-shaped swimming pools, symmetrical agricultural lands, and the stunning form of East Berlin’s Velodrome come into their own, giving the angels a view for the ages. We met with Volker to learn more about the inspiration behind his aerial photography.

How did you get into aerial photography?
I started taking pictures with a normal Canon camera when I was studying geography at university. When drones became available, a friend and I bought one. We were so fascinated by the new perspective it gave us. Everything is so different from above. All the structures and symmetries you can find. 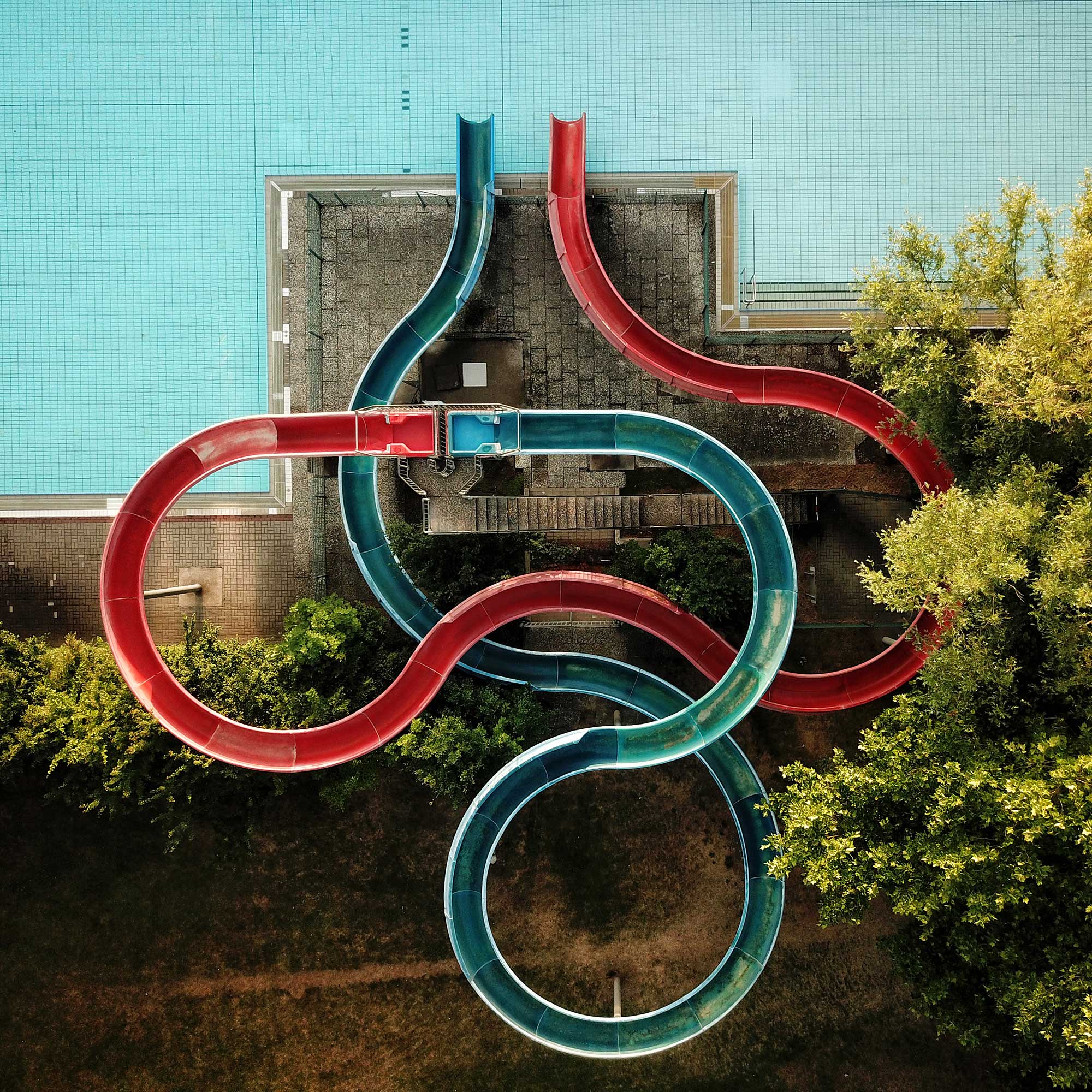 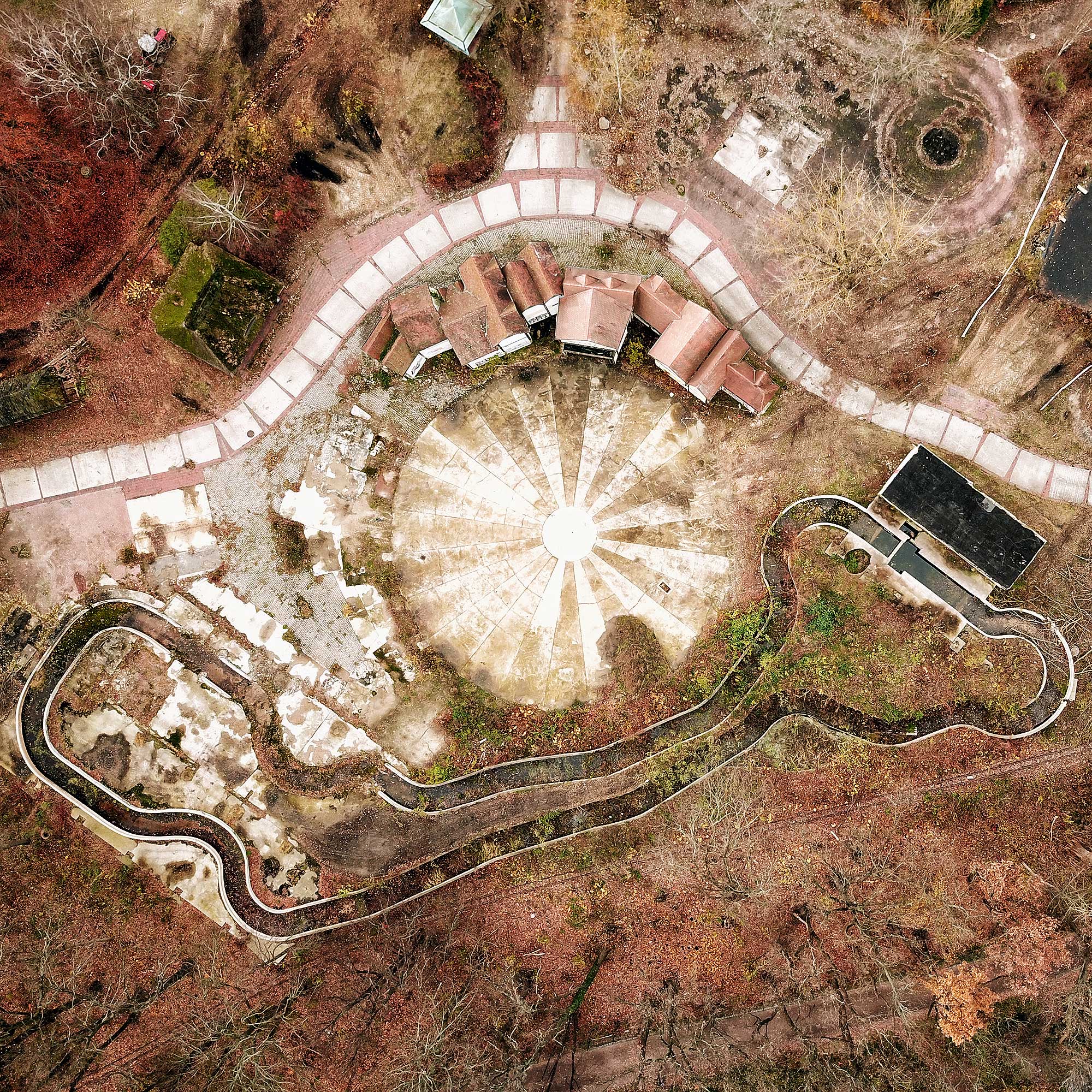 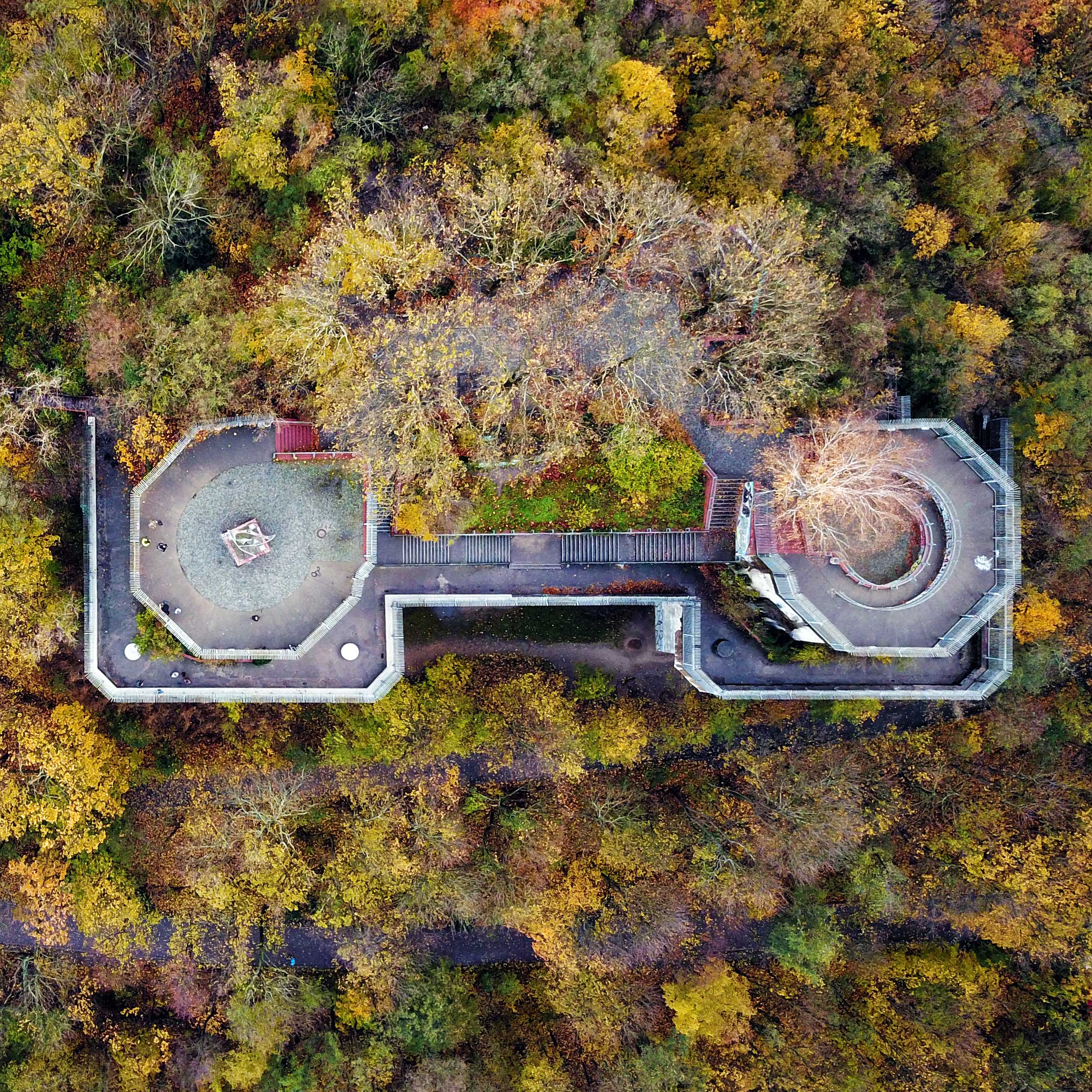 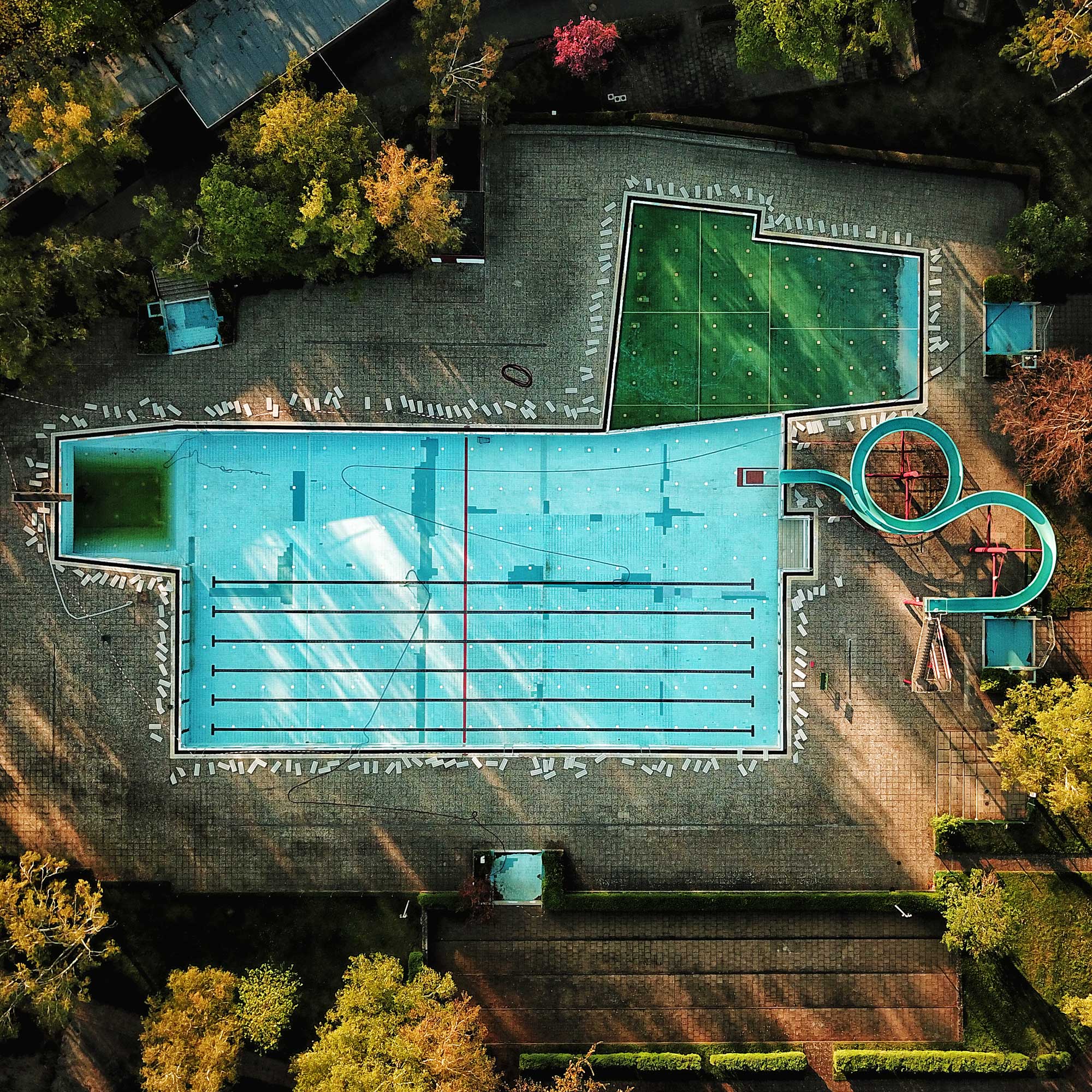 What are the most interesting shapes you have seen from a bird’s-eye perspective of Berlin?
I took a top-down shot of the Neukölln Sommerbad, just for fun. I liked the shape of the pool; it looks like a small dog from above! The company that manages Berlin’s pools spotted the photo on Instagram and commissioned a series of eight pictures. There’s another one that looks like a dog in Wedding Humboldthain.

I also love Berlin’s urban gardens. My previous job was related to urban gardening. I’m also a member of one in Mauerpark. The plant beds have beautiful structures when you look at them from above. Actually, last Saturday I won a competition for the picture I took of the urban garden in Wedding. It’s now in Müllerstraße on a big billboard!

I especially like to take photos of nature. Lately I found a lot of nice symmetries in agriculture, that’s why I’m out more in Brandenburg. From above you can see how precise they are with the farming they do with GPS. It’s fascinating.

Who are your clients?
I work a lot for environmental organisations, as they need agricultural pictures for their campaigns. Real estate companies need photos of house surroundings. I also take pictures for vinyl and CD covers, also events. I definitely love nature photography the most though. 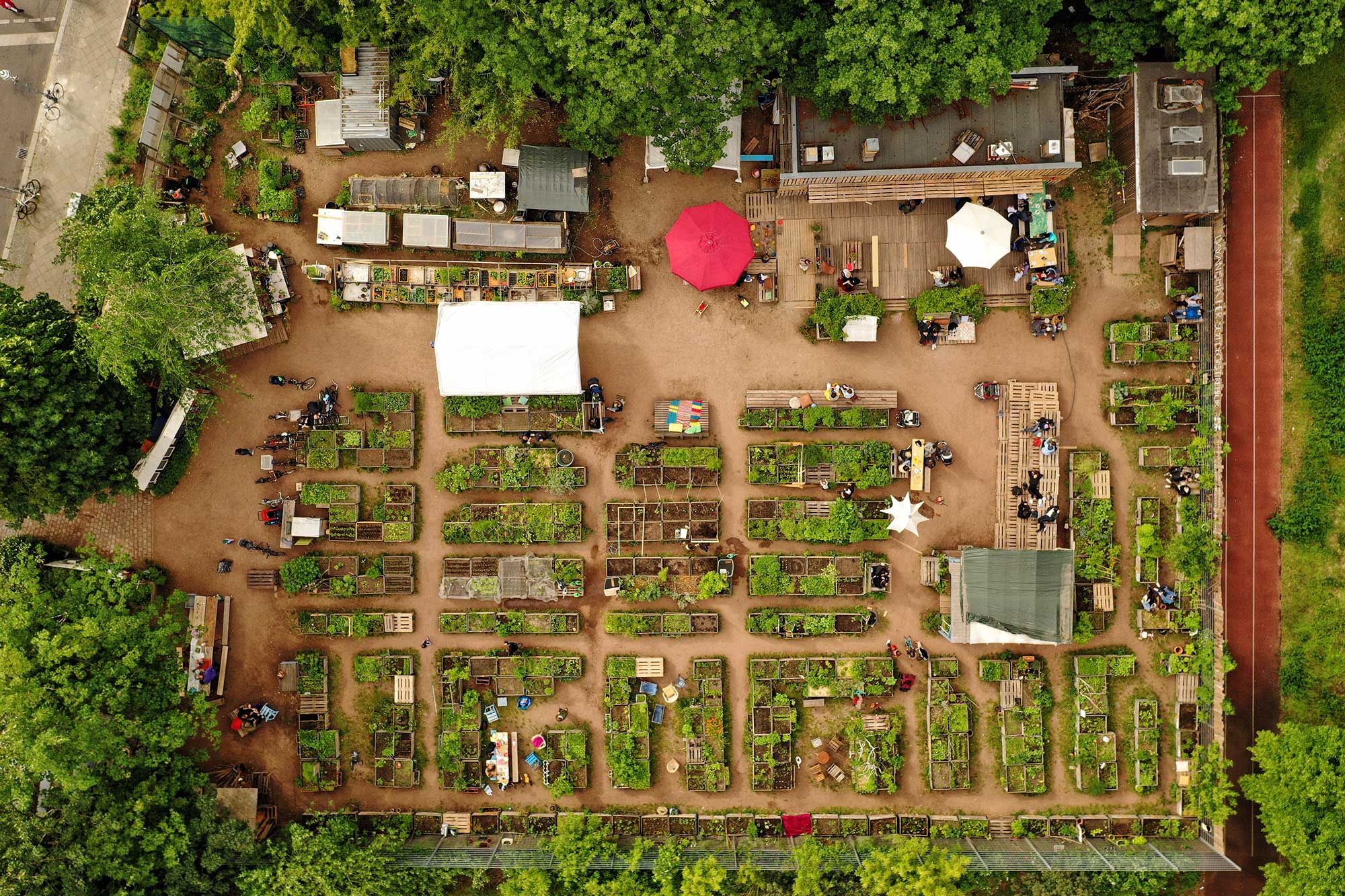 What restrictions do you have?
So many! Berlin has one of the strictest sets of regulations for drones in the whole of Germany. It’s easier for me to fly my drone in Bavaria than Berlin, which seems crazy! The drone can only fly 100m high. You’re not allowed to fly over residential areas, or streets of course. The Spree is off limits. All power plants and governmental buildings are a no go. There is a ban mile around the Reichstag, so you can’t access all of the touristy parts. Officially, you need a permit to fly over parks too. It’s really a lot and very difficult.

Why do you think drones are so strictly regulated?
It’s because there are so many around. Drones are just a toy to many people, and [they] just buy them to fly around as a hobby. It can get annoying with the sound, but mainly I think it’s safety reasons. I can understand that. Say I fly a drone over an autobahn and it falls down, causes a big crash. Then it’s getting really dangerous. There was also that case recently where drones disrupted flights at Gatwick Airport in the UK. People also have concerns about privacy.

If there were no regulations, what would you like to take photos of?
I think I would enter the zone where the ban mile is around the Reichstag. There you have Museumsinsel, the Philharmonie, and Potsdamer Platz with really nice architectural patterns. 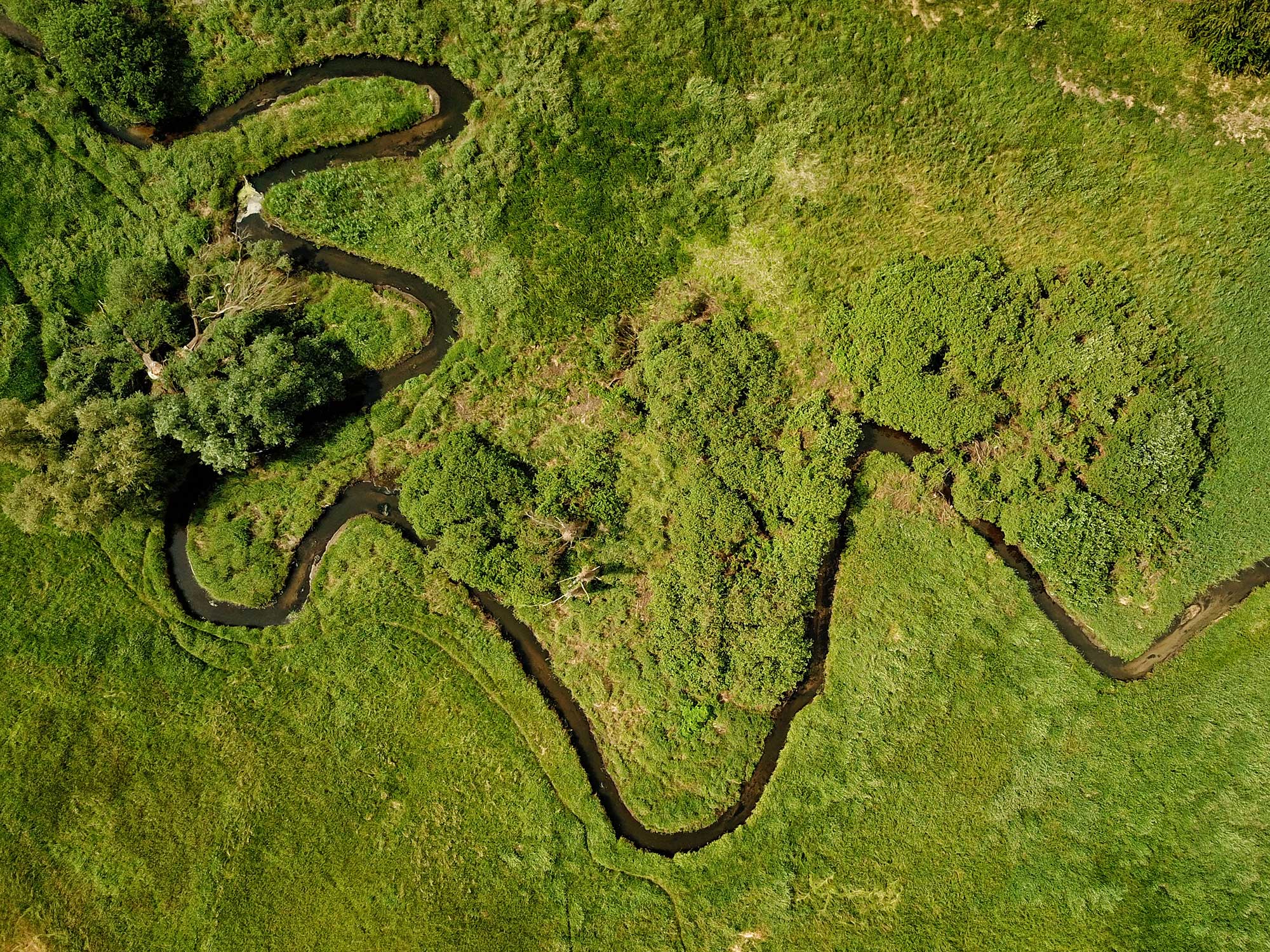 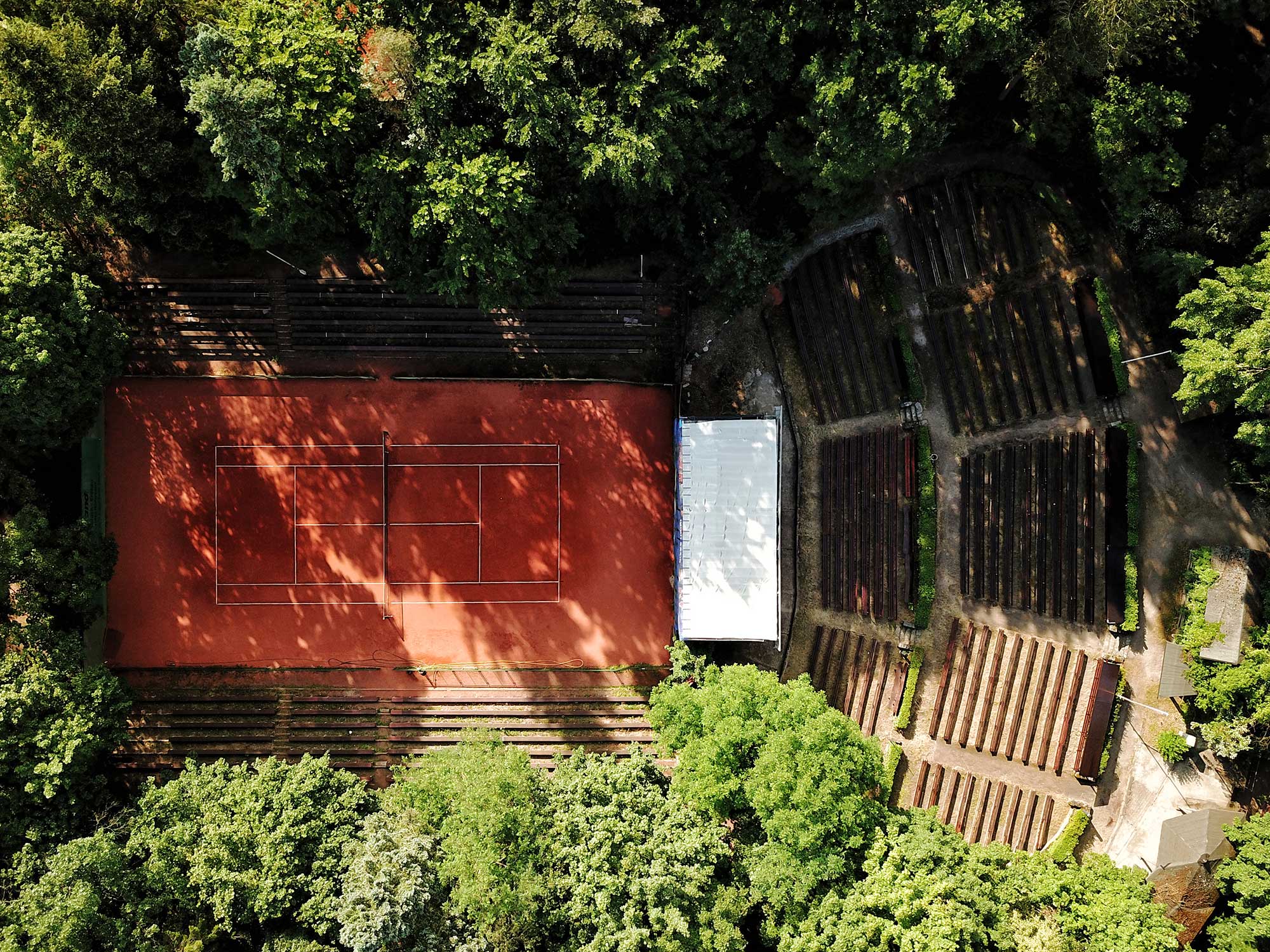 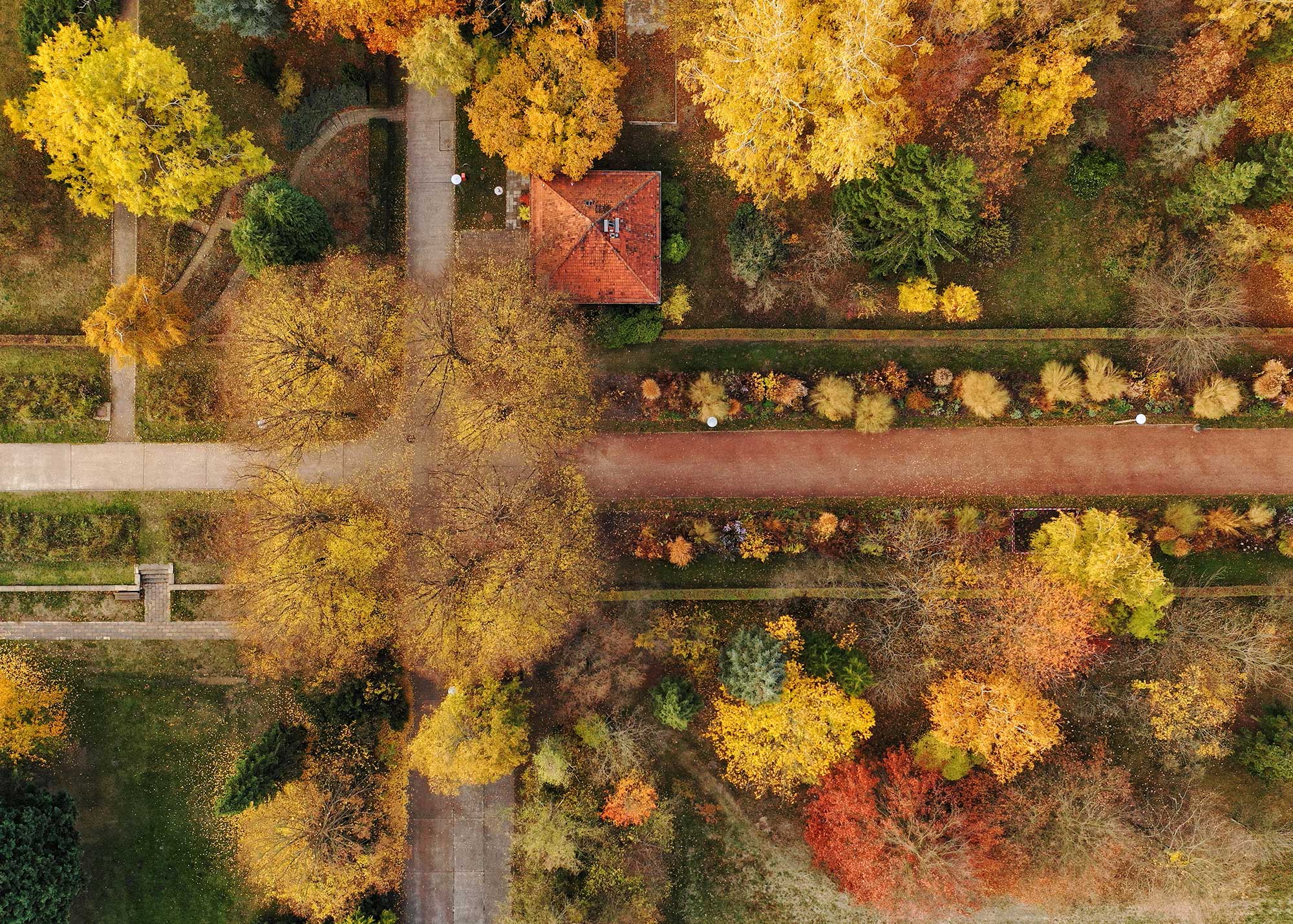 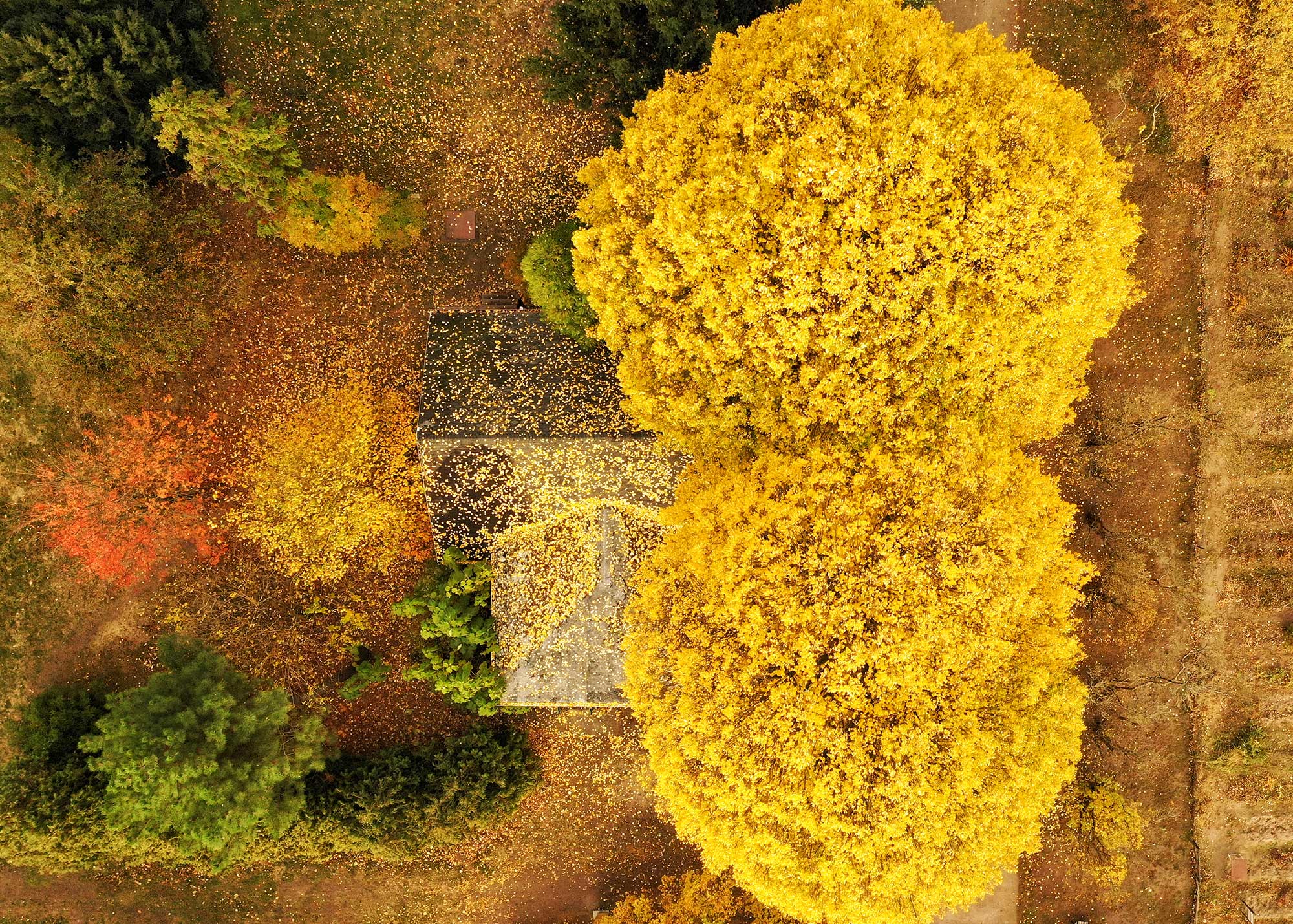 What would your ideal Berlin of the future look like from above?
I think the situation now isn’t too bad. What I love about Berlin is that it has so many green spots and so much water. It’s already a green city, but of course it can improve. The problem is they are taking things away. For example, one of the urban gardening projects I photographed now has to move because they want to construct something in that area. I would love to see more urban gardening projects in Berlin.

Have you ever had a crash?
Once in the beginning. I was at a castle to the east of Berlin. I was filming a guy on a balcony and I was flying the drone out. I saw a tree, but I didn’t realise how much time you need for the drone to stop and the drone was still moving after I had hit the brakes. It was total carnage.

Do you have a favourite photograph?
Not only one. I love the photos of Berlin’s swimming pools. I also really like the photos of the round gardens in four different spots in Berlin. It’s all organic agriculture, where you can rent a slice of the circle. You have your own patch for the season, and you can go there and harvest, just like your own garden. It looks really nice, the rings and colours of all the veggies.

Top-down shots are my favourite. You see a totally different shape and perspective than what you get on the ground. For example, the Berlin Velodrom, when standing next to it you can see it looks round, but you don’t get a real sense of it.

What’s next for your project?
I want to open a small shop to sell my photographs. I don’t have any specific ideas for future photo projects in Berlin. I’m surprised how many things look fantastic from above. I just need more time and less regulations to explore! 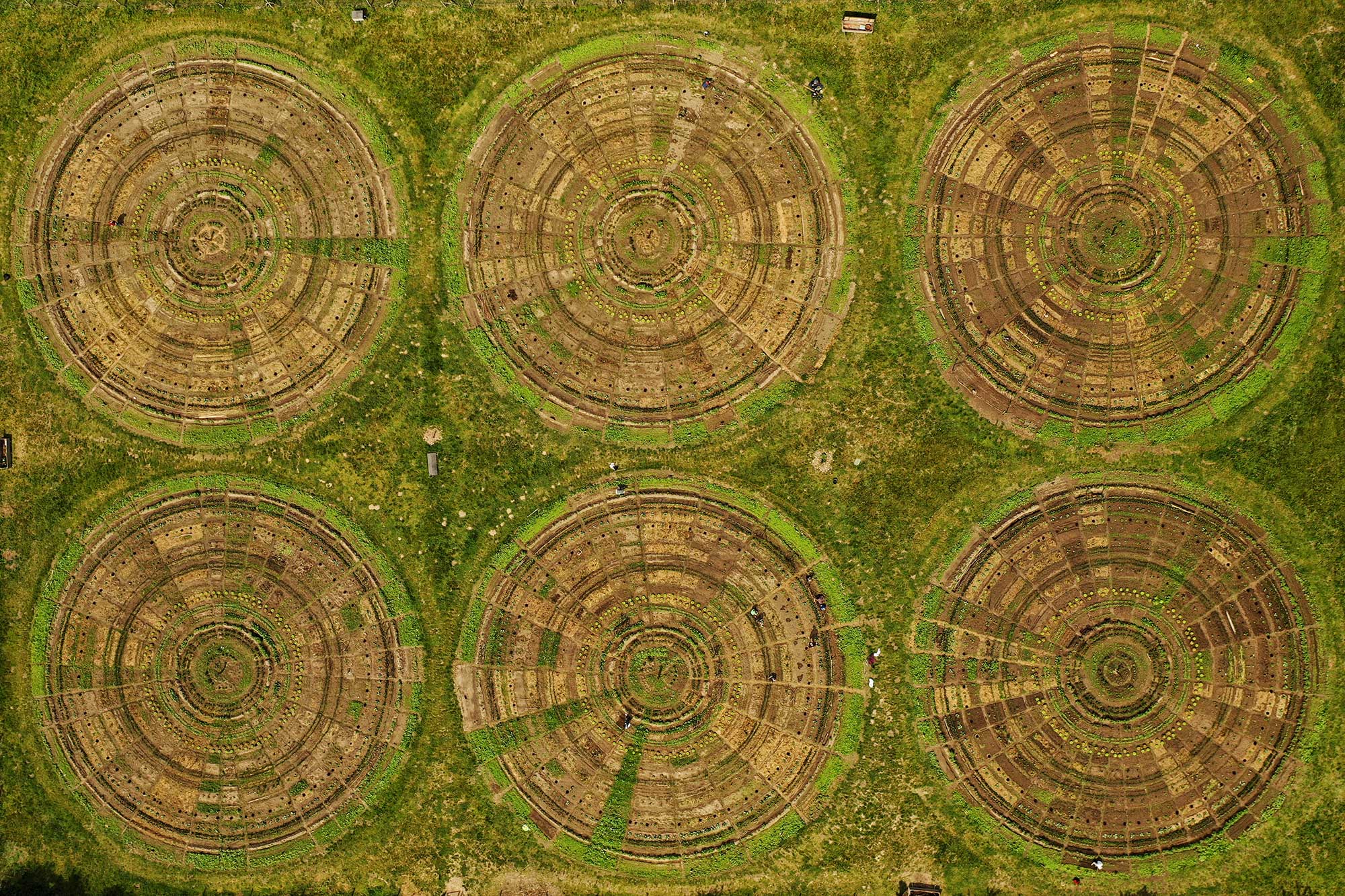