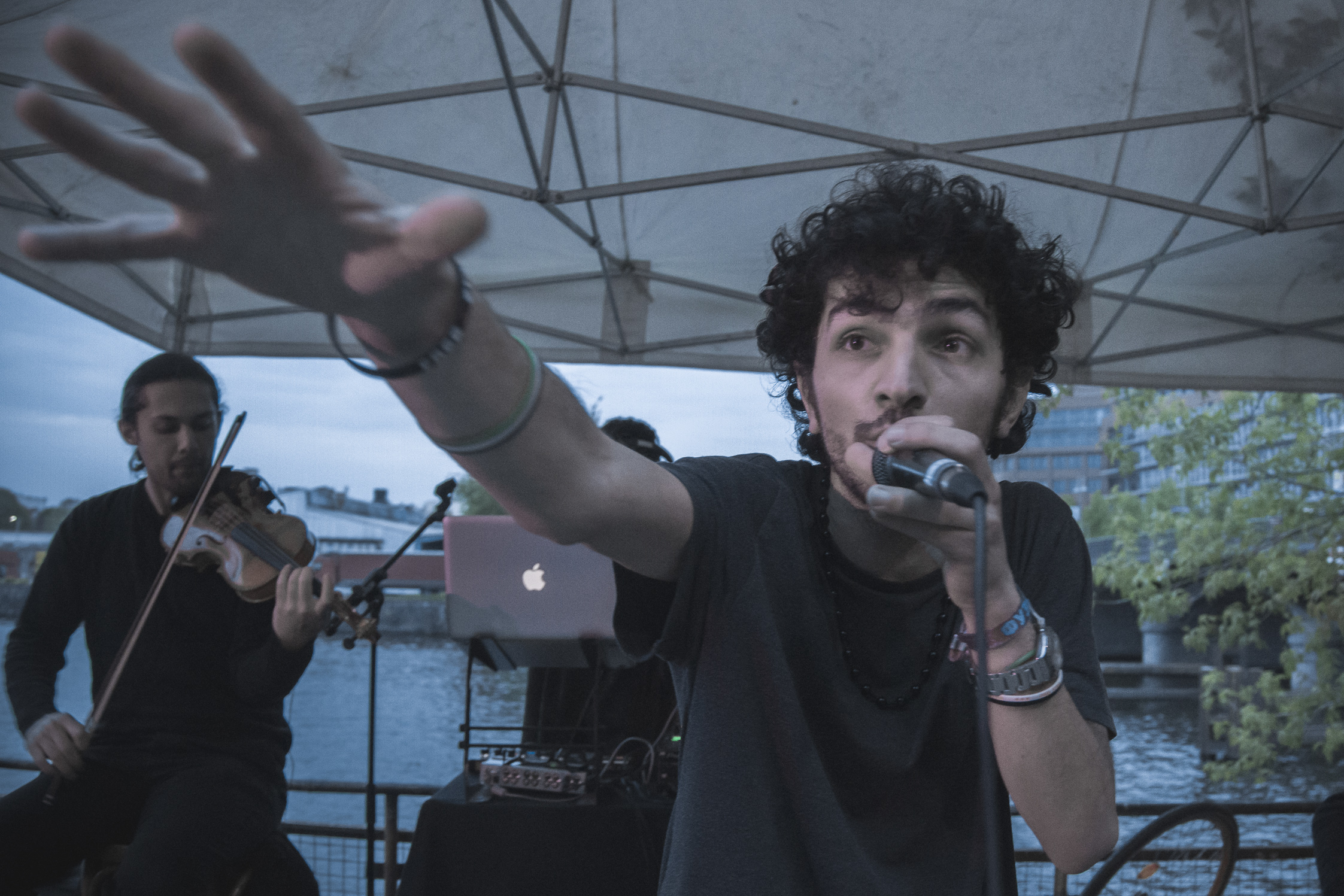 On a cold day in early February, a large crowd gathers at the Brandenburg Gate to protest Executive Order 13769, Donald Trump’s ban on persons entering the United States from seven majority-Muslim countries. Amid the ‘Ban Fascism Not Muslims’ and ‘Love Trumps Hate’ placards, Syrian rapper and activist Mohammad Abu Hajar steps onto the stage at the front of the rally to address the crowd.

The young man, also known as MC Abu Hajar, grew up under authoritarianism. He has spent time in the prisons of the Assad regime. He understands how one man seeks to maintain power by brutally oppressing others. This understanding is shared by his Syrian bandmates in Berlin and it fuels the powerful music they’ve been unleashing on the city’s stages since 2015. 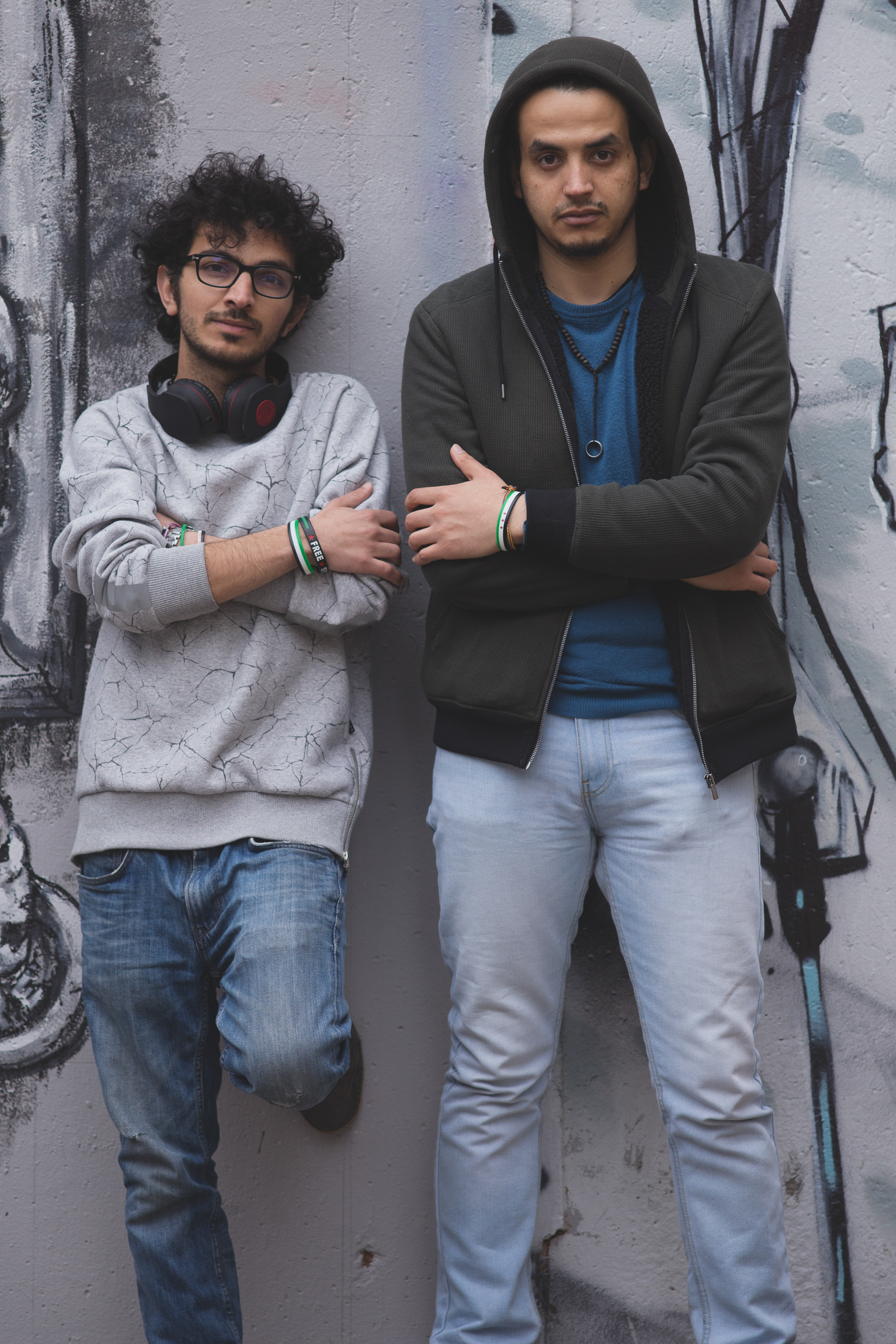 “For me, what matters is that we don’t only fight Trump, but we fight the infrastructure that created Trump and will create other Trumps in the future,” Mohammad tells the protesters who are cheering him on during the grey mid-winter day. “I’m not here only for Muslims, I’m here in solidarity with my white fellows not represented by Trump. I’m not here only because I’m Syrian or an Arab. I’m here for humanity.”

Mohammad goes on to speak of a dictatorship that has been in power for half a century and has ultimately destroyed his country. “I don’t wish it for the rest of the world,” he continues. “I think it’s so important to start dismantling the whole mentality that brought about Trump. It’s not only people standing in solidarity with Muslims. We are standing in solidarity with each other.” The cheers grow louder.

He reiterates that despotism is never far away. Backed by the vast sandstone columns of the Brandenburg Gate that somehow survived Hitler’s war, Mohammad says that Berlin understands this well. 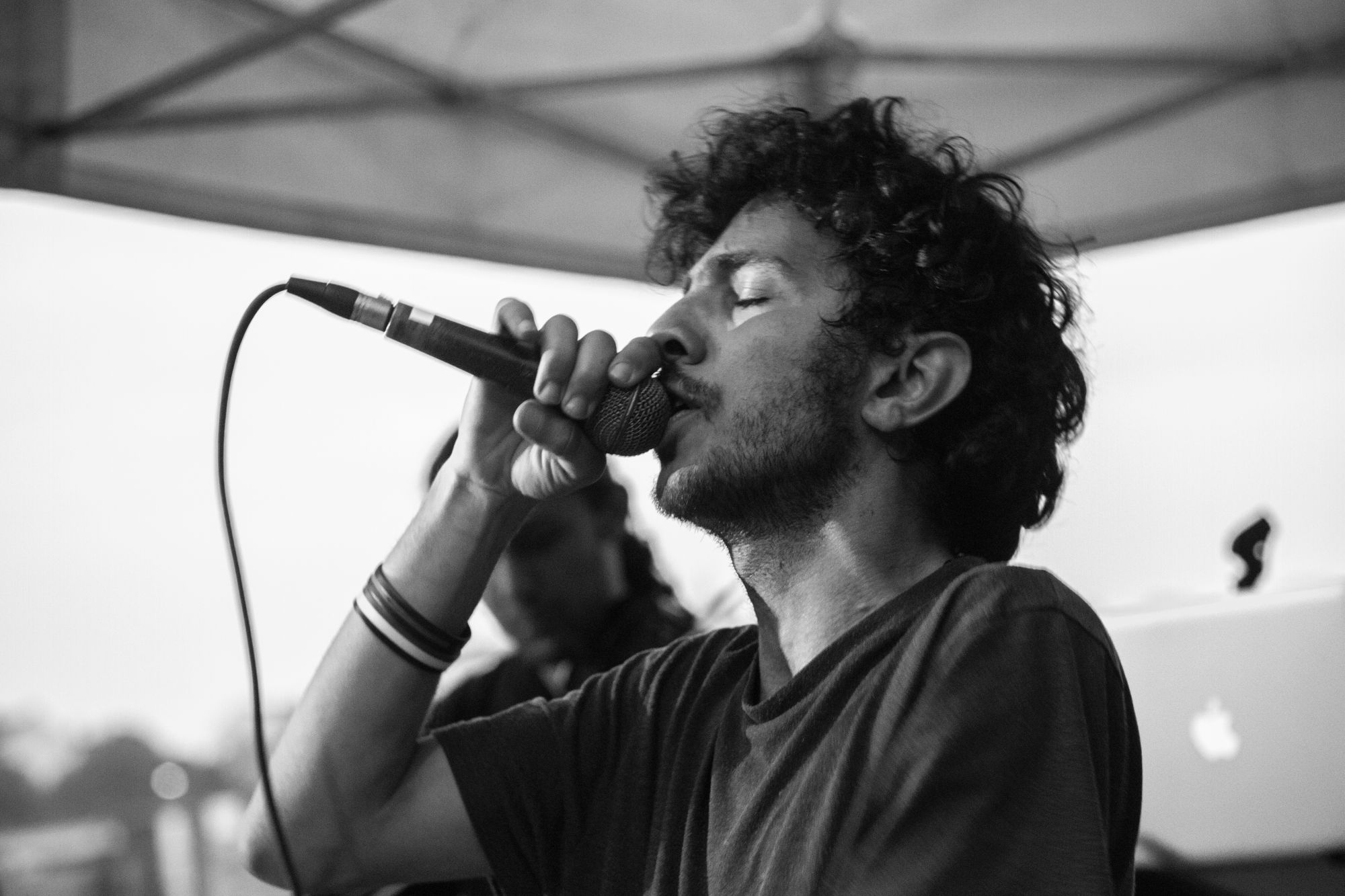 A flag of the Syrian revolution flutters above the crowd as Mohammad introduces a rap song he wrote on his first day as a political prisoner. He says that his interrogators would ask him if he wanted freedom. If he responded yes, they would torture him. “That’s the freedom you deserve,” they would say. That night he wrote a rhyme in response to his beatings. “Do you want freedom?” it begins. “Yes, we want freedom and we want Syria to be a country for all, and we want this world to be a place for all.” Mohammad soon has the whole crowd chanting, “yes, yes, yes,” in Arabic.

Partly inspired by emerging Arab rappers in countries such as Egypt and Lebanon, but also by elements of traditional Middle Eastern and Sufi music, MC Abu Hajar was one of Syria’s first political rappers. A then-Marxist and atheist, he was barely 20 when he was first jailed in 2007 for making music that was critical of the regime – in particular, a song that criticised honour killings of women by men, who are rarely prosecuted for these crimes. That was the year he also formed the band Mazzaj Rap with local Tartous musicians, Alaa Odeh and Hazem Zghaibe. Mohammad’s birth city of Tartous, on the Mediterranean coast, is fiercely pro-Assad.

Having already gone into exile in Jordan to study following his initial incarceration, in 2011 Mohammad was inspired to return to Syria during the Arab Spring to take part in the first spontaneous peaceful protests. After decades of emergency rule, of extreme intimidation and fear among a heavily-policed populace, this was a bold grassroots demand for civil and democratic rights that was inspired by revolutions in Egypt and Tunisia. Mohammad and his collaborators never worked for a political party, nor did they later fight for the Syrian Free Army when an exercise in civil disobedience became militarised. He was there as a citizen, simply campaigning for freedom of expression among all Syrians, whether Arabs, Muslims, non-Muslims or Kurds.

As the revolution spread across Syria by late 2011, Mohammad believed that the regime would relinquish power, just as the Mubarak dictatorship had done in Egypt. But a few months later, he was back in detention, a victim of a vicious crackdown by a desperate government that didn’t shy away from killing its own people.

Mohammad first told us his story in a café in Wedding that had recently been opened by members of the growing Syrian community here in Berlin. As we sat and drank tea, he pointed across to a man at the next table with long hair. It was Ahmad Niou, the Mazzaj Rap percussionist with whom he shared a jail cell in early 2012. After being arrested, the two were beaten and then accused, without evidence, of unauthorised political activism. They suffered daily torture, from whippings to beatings with electric prods. Mohammad was witness to the killing of one prisoner, and heard of the deaths of many other inmates. He doubted whether he would get out alive.

Mohammad was released two months later, but he was pursued again by secret service agents and one day was forced to flee over his back fence in his pyjamas. Soon after, he left Syria for the last time, arriving in Lebanon before travelling to Europe. He lived in Rome for a couple of years, where he finished his master’s degree in political economics. Mohammad then came to Berlin, in part because a strong community of Syrian political exiles was already established here. Ahmad Niou, also from Tartous, came to join Mohammad in Berlin. Mazzaj Rap were reunited, this time joined by Matteo Di Santis, a friend from Rome who provided electronic beats and samples. 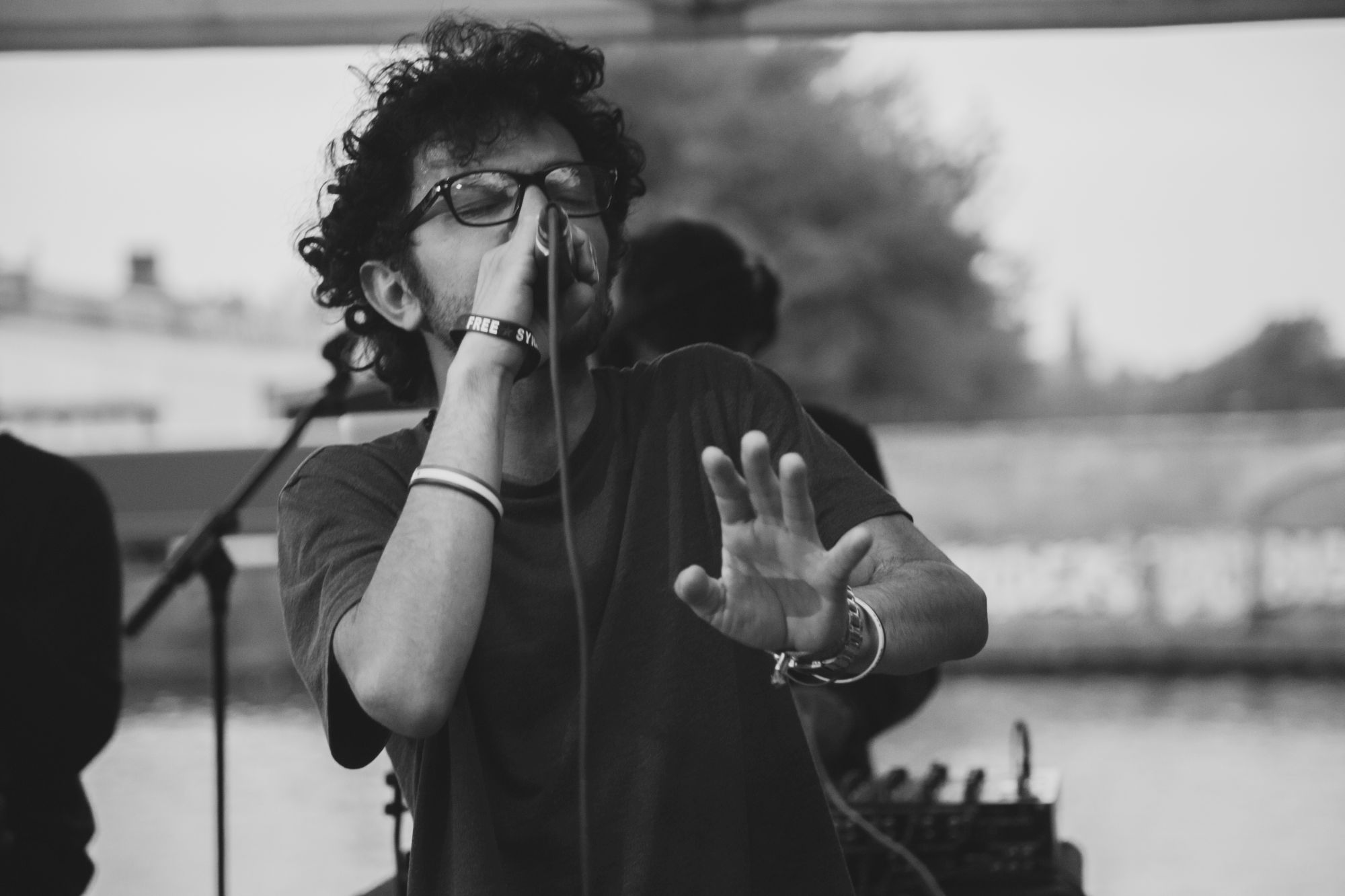 In 2016, the core band evolved into another project, Mazzaj Raboratory, which includes Alaa Zaitounah (oud) and Zaher Alkaei (violin), who also made circuitous routes to Europe from the Syrian cities of Swaida and Homs. Beyond the hard-edged American rap idiom, Mazzaj Raboratory are forging what Mohammad describes as an “oriental rap” sound that “tries to break the contradictions between eastern and western music.” “It’s a road that we can all walk together,” he says. This new direction is the subject of the album the band is currently recording, entitled Third Way.

Mazzaj Raboratory play their first show in front of a packed audience at Kreuzberg’s Köpi squat. The heavy beats, overlaid with hand percussion (darbuka) and driving oud and violin solos, somehow evoke the flames of the Arab Spring that these Syrian exiles still nurture, and which fuel MC Abu Hajar’s pointed political rhymes. Meanwhile, images of people enduring detention and torture flash across the back wall, along with song lyrics in English. The band is playing ‘We Fed Up’, a track “dedicated to all the political detainees and their mothers,” the lyrics of which Mohammad also recited at the anti-Trump rally. The many Syrians in the audience thrust their fists in the air in response to the chorus: “You want freedom. Yes, and we want all the detainees!” It is impossible not to be swept up in such a cathartic public outpouring of emotion that has been so long repressed. The band comes back to perform two encores.

On May Day 2017, Mazzaj Raboratory perform on a bill entitled The Revolution Will Not Be Televised at Yaam, on an outdoor stage directly on the Spree. Mohammad introduces ‘People Well’, a song about a time when young Syrians dreamed that the Arab Spring would spread from Tunisia and Egypt to Syria. “Two weeks later it came,” he says. The beat kicks in. “From Tunisia, from Egypt, tomorrow a victory will arrive, and people who have been martyred will dislocate the gates of the palace,” he raps, in Arabic. 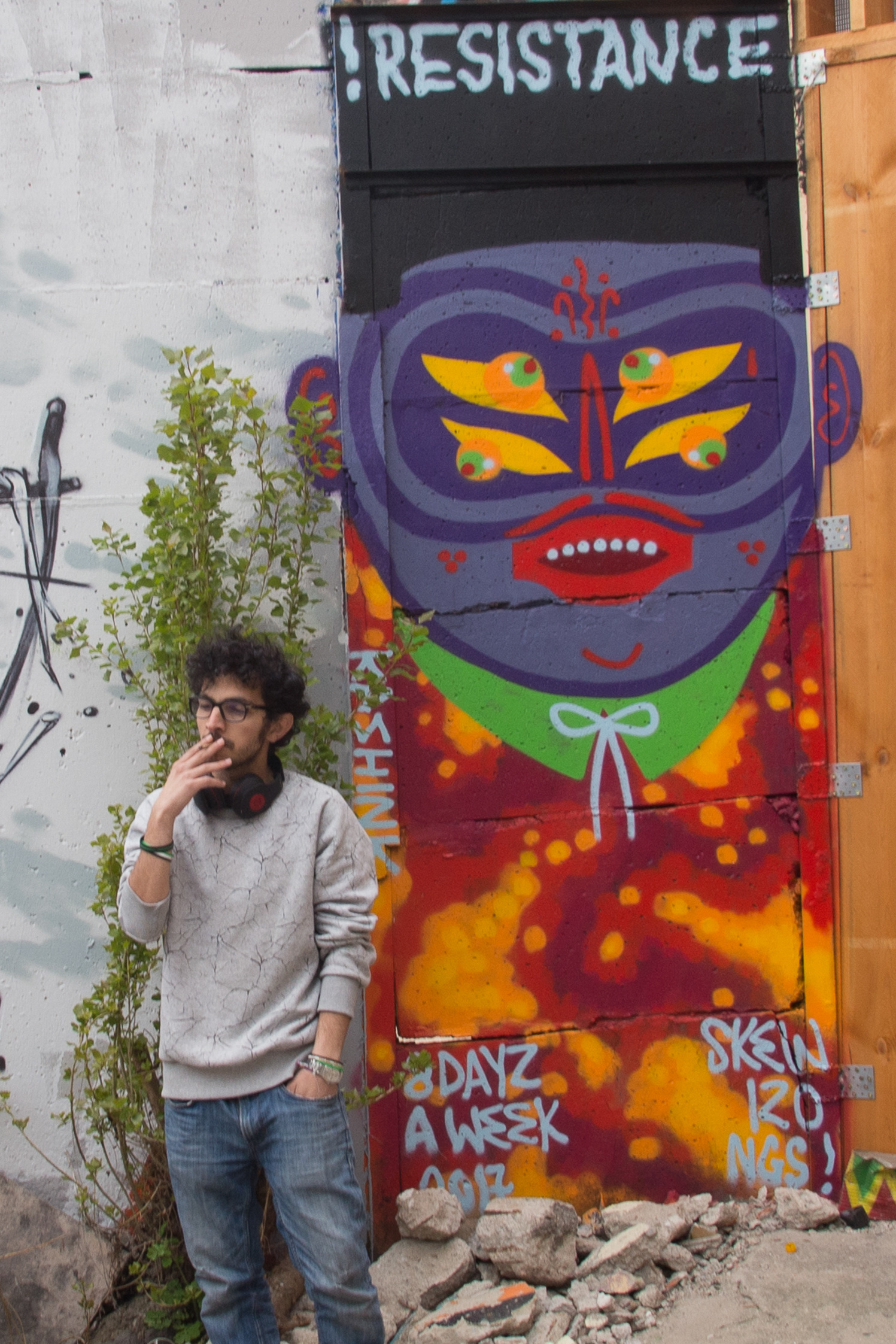 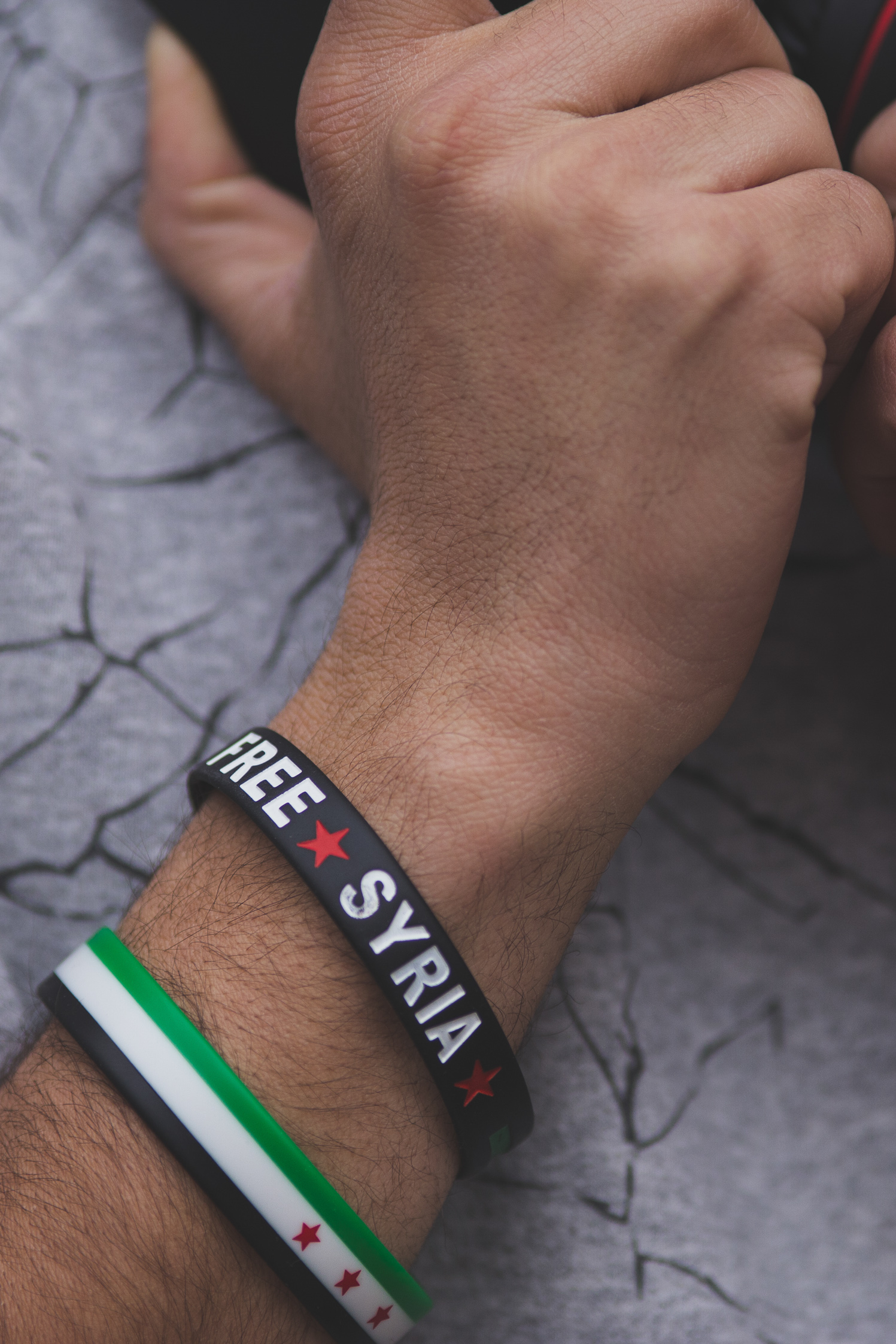 I even feel humiliated by the pity of some people who are pro refugees. Pity will always show me that I’m not equal. 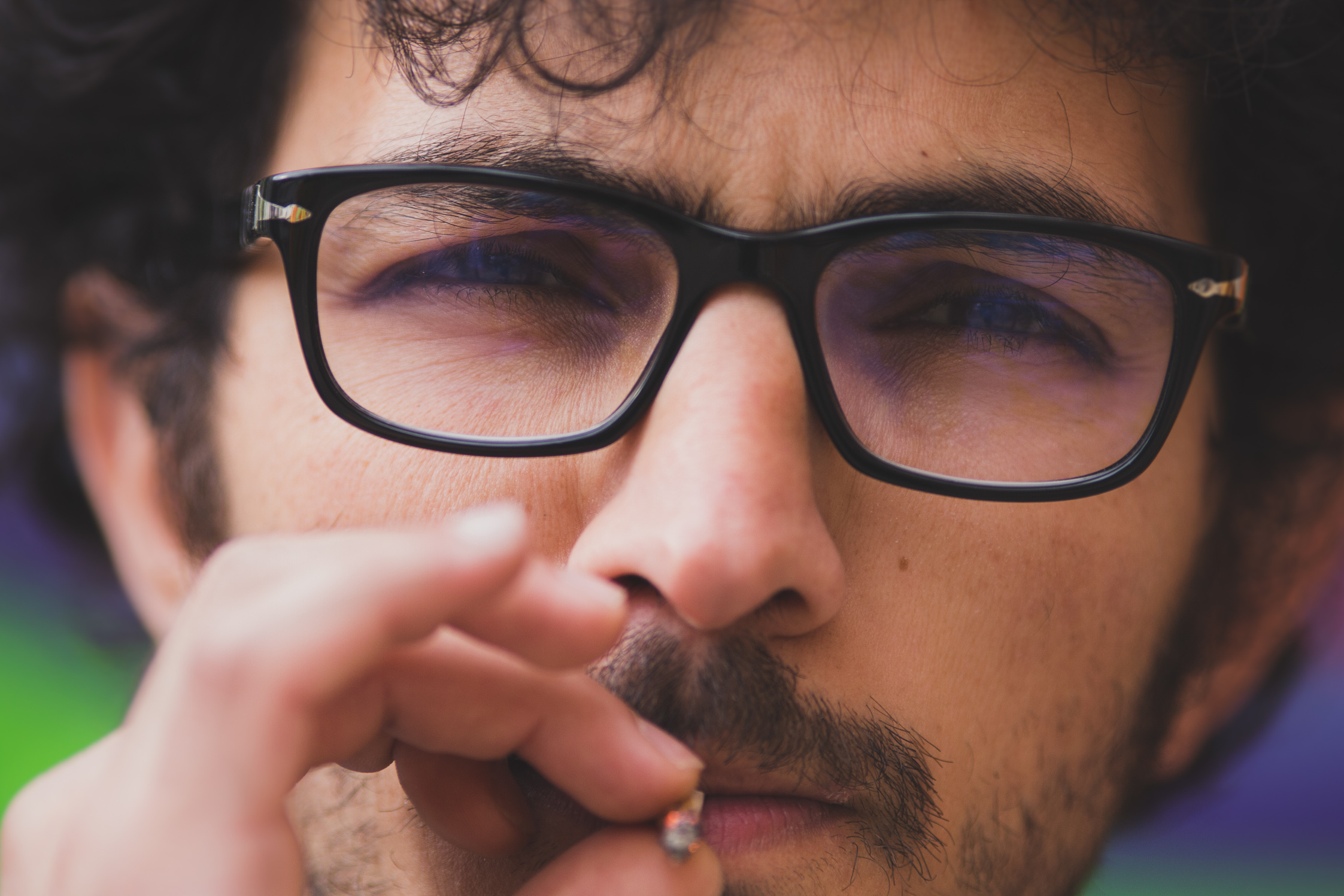 The words and the music have an added tension as police vans line up across the bridge spanning the Spree and beyond. The audience, including a man draped in a Syrian revolution flag, dance and chant, urging political action as Kreuzberg threatens to explode at the May Day witching hour.

These Syrian exiles not only depict what life was like under Assad, but their attempt to regain their dignity as they are persistently stereotyped as part of a migrant horde that broke down the gates into Europe. “Who will give housing to a refugee?” Mohammad asked us last year after a spate of terrorist attacks in France and Belgium that fuelled the xenophobic rhetoric of Trump, Le Pen, and Germany’s Alternative für Deutschland party. “On every application I write: ‘I’m Mohammad, I’m not a terrorist.’” Although many refugees like himself do not follow Islam, they suffer the consequences of extremism. “I even feel humiliated by the pity of some people who are pro-refugees,” Mohammad adds. “Pity will always show me that I’m not equal.”

On the upcoming single ‘Uncertain State’, also the title of a concert the band performed at the Akademie der Künste last October, Mohammad expresses the anxiety that derives from his rootlessness in Europe. “I am trying to stand on my feet but the soil below is so fragile,” he sings. “I’m trying to say I belong … but the tribe’s mentality rejects me.”

'I am trying to stand on my feet but the soil below is so fragile,' he sings. 'I'm trying to say I belong … but the tribe's mentality rejects me.'

This uncertainty is amplified by the fact that these exiles do not have the choice to go home. In ‘Homeland’, a video and music collaboration with the Turkish artist Halil Altindere that was exhibited at last year’s Berlin Biennale, Mohammad leaps over a border wall and leaves Syria behind, forever: “The home is lost, the home died, the home is behind me now. And everything finished, it’s over.”

Speaking to Mohammad on Pariser Platz as the anti-Trump protesters form a cordon and begin marching down Unter den Linden, we discuss the album he and the band have been recording. Inevitably, we talk about Syria. A lot has changed in the weeks prior. With the help of a Russian air bombing campaign, Assad has taken back Aleppo, Syria’s largest city, from the rebels. Mohammad says it has been a difficult time. The dictator having consolidated his power, and the revolution now unlikely to succeed, this young man is contemplating the very real possibility that he will never be able to return home.

As we walk, Mohammad explains that it might only be possible to go back if he renounces his opposition and commits fealty to the regime. As a relatively well-known activist, this might be seen as a coup for Assad, and might save Mohammad from ending up in prison. “But I will never do this,” he says. “I won’t accept going back to Syria as a humiliated person,” he tells us. “I would only go back as a free person.” The revolution continues.

Mazzaj Raboratory released the single, ‘Uncertain State’, in May and the forthcoming album, Third Way, is due out in the summer of 2018. Follow them on Facebook.