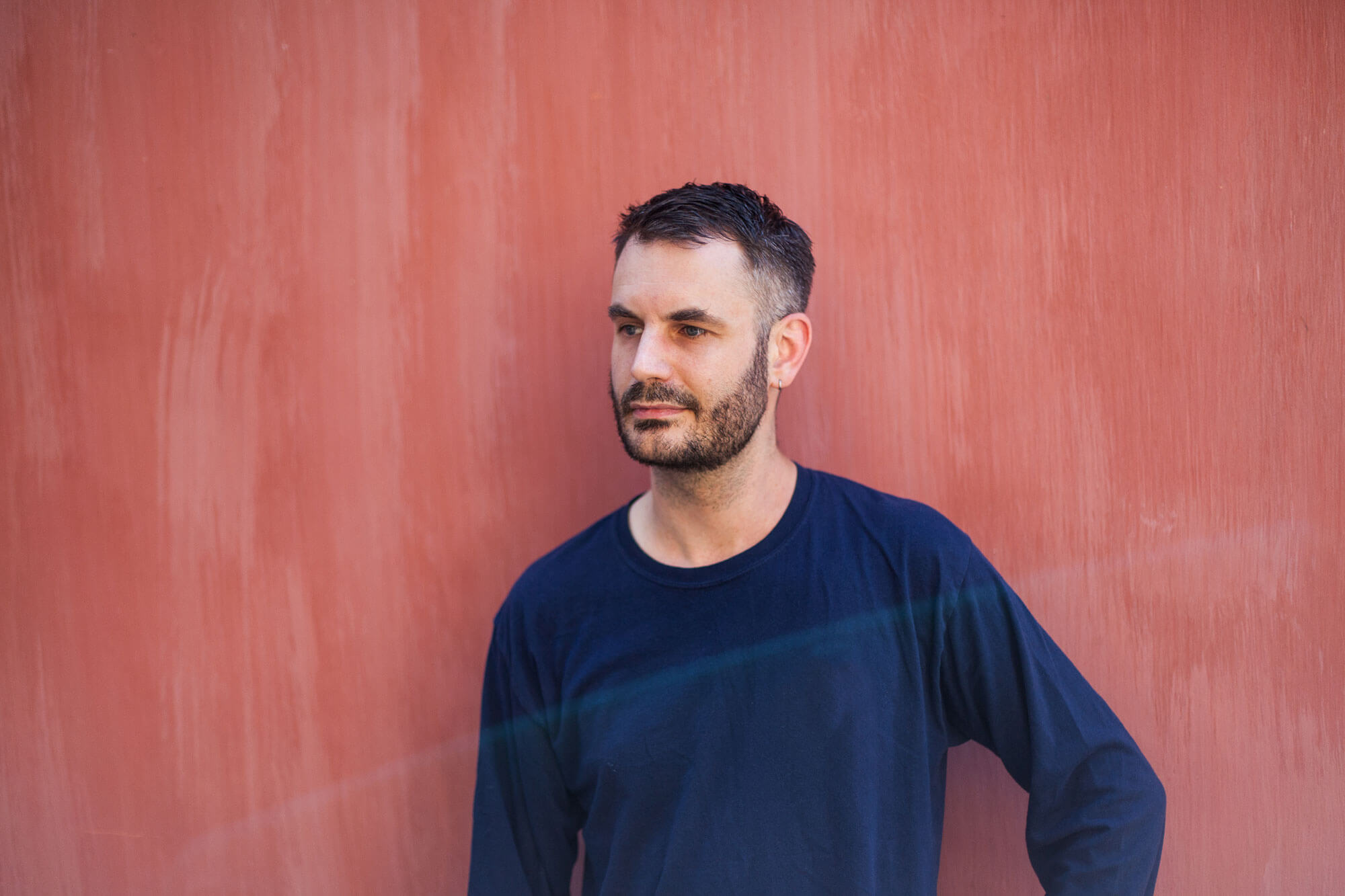 Una Vida de Barrio – “a neighbourhood life” for the non-Spanish speakers – seems like a pretty apt moniker for Berlin’s Kiez mentality. It also happens to be the serendipitously coined title of a very special record released earlier this summer. The LP in question is an ode to football’s unifying power. It’s also a nod to another great leveller, electronic music.

The record’s backstory kicks off in 2013, when DJ and producer Tristan Jong started having a casual kickabout with his housemate Nico. Their five-a-side games at a concrete-clad Kreuzberg pitch quickly snowballed into a weekly matchup of music industry heads either living in or visiting Berlin.

Any footie lover who’s grown up in a city can instantly relate to cage football. Those little asphalt arenas are where worldies are scored, beef is settled, and friendships are formed. But beyond the graffitied walls and grazed knees, Mittenwalder Straße’s inconspicuous cage turned out to be a crucible for musical creativity. 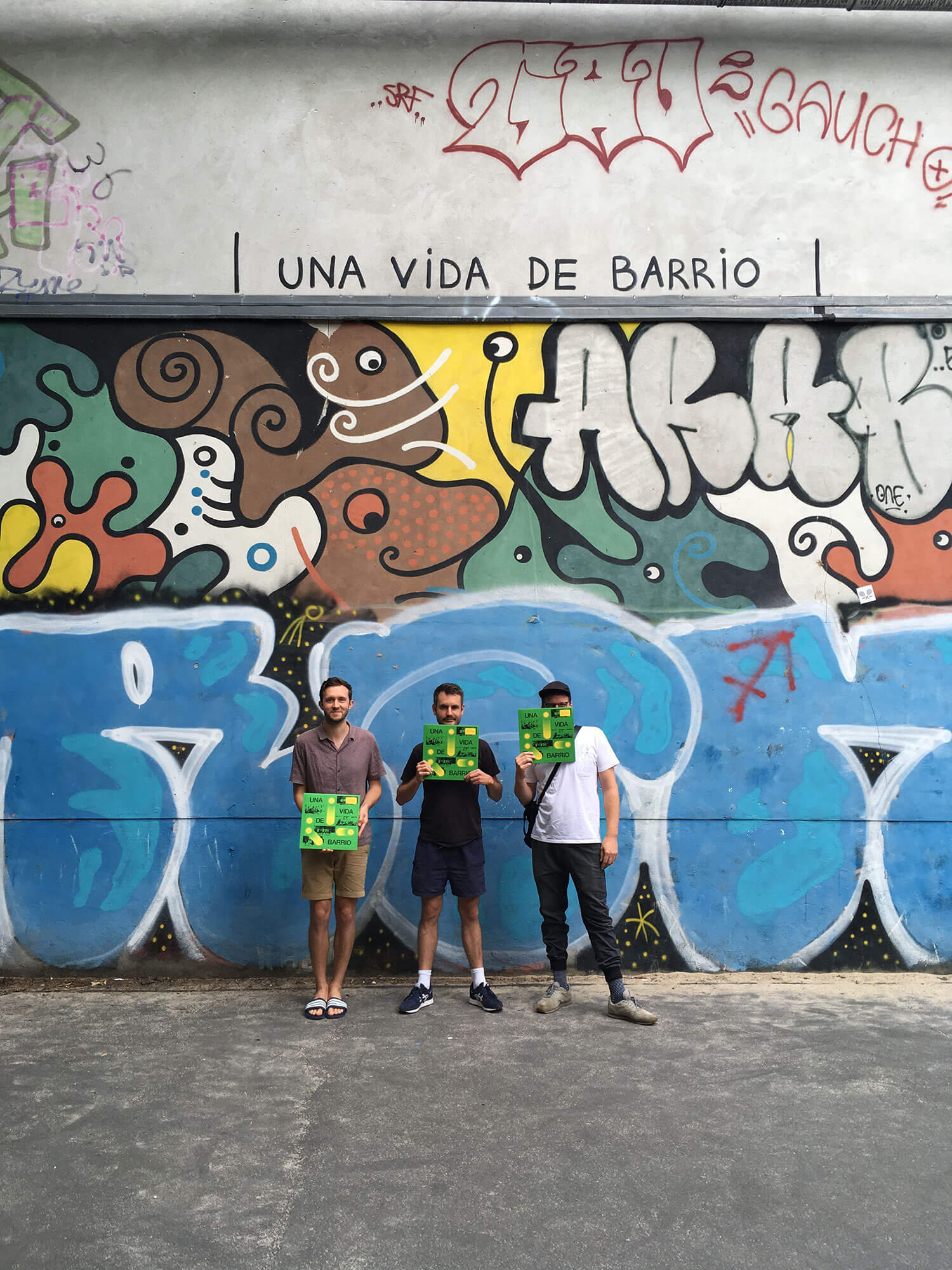 The concept behind Una Vida de Barrio – an eleven-track compilation, each tune created by a different artist and dedicated to their footballing idol – was born when Tristan realised almost all the regulars were connected to electronic music. The outcome is a tantalising line-up of songs that manage to capture the majesty of each player, whether that be the goal-scoring exploits of a star like Romario, or the lesser-known Welsh wizardry of Clayton Blackmore.

Shortly after the record’s launch at Urban Spree, we caught up with Tristan to talk about the LP in more detail. From what he had to say, it became clear that combining football, tunes, and nostalgia really makes for a super hat-trick.

How did the Kreuzberg matches first start? How long hav­­­­­e they been going on?
When I moved to Berlin in 2013, my roommate Nicolas and I thought it would be fun to play some footie with mates. The both of us had played together in the FCL team in Belgium before (where he and Red D got their other production guise from) and love to kick some ball. Actually, wherever in the world I’ve lived or travelled to, I’ve always played with the locals. The game brings people together, much like music, in fact. Before Berlin, I was based in Brussels and I also founded an indoor football team there named ‘Stoemp’, after the concert series I was running at that time.

When Nico and I started organizing these five-a-side matches in the Mittenwalder cage, more friends (of friends) would show up every week. Not just people living here, but also folks visiting for gigs etc. Since we took a team photo after pretty much every game since then, there’s a fairly large pic archive at hand.

Divisive question, but who’s the handiest player in the cage?
You’ll understand that I’m not allowed to answer this question. Let’s just say that we’re all equally skilled, though some are clearly more equal than others.

How did the idea for the LP come about? Are you happy with how it turned out?
I first got the idea when I realized that basically everyone on the pitch was somehow involved in music… either producing, promoting nights, DJing, or whatever. The other day I found a draft in my iPhone with the very first idea jotted down, which was in August 2016.

I’m quite happy with how it turned out. Unavoidably, since the project has taken a while to wrap up, I did go through a few phases of being really sick of it. But thanks to Moomin’s amazing mastering and Nano’s amazing sleeve art, I’m very proud that we all went through the trouble to get it out there. I’ll admit it’s very nice to get all these great reactions from people that have been involved with the football games, neighbours and locals alike.

I think every tune does channel a bit of the player’s spirit on the pitch.

Why did it take four years to make the record?
Ever since August 2016 it was always a little side project that I put a few hours into whenever I had the chance. In the first phase that summer, there was a pool of probably 30 people that I asked for tracks. Lots of players that joined us in the cage didn’t end up on the compilation. Shouts to George Fitzgerald, Josh from The Ghost, Andy Hart, Alex Bradley, Youandewan, Trus’Me, Massi from Nu Guinea, Mic Newman, Gene On Earth, Steve Huerta, Hauke from Session Victim, Benoit B, half of Brame & Hamo, Red D, my ensemble partner Kong, and many more folks I’m probably forgetting. After a few initial tune roll calls and plenty of boring follow-ups, we magically ended up with 11 solid tunes, which was just perfect. Even though it took long enough already, there were actually a fair few more ideas I had that didn’t make the cut, like Panini-style individual player photos of all the producers.

Beyond the terraces, making a tune about a player is quite novel. How did this shape the creative process?
Each track being dedicated to a legendary player did shape the creative process, for some more than others. Nemorna’s ‘Tony Yeboah’ track, for instance, actually samples a bit of Tony. Trujillo’s ‘O Fenomeno,’ a tribute to fat Ronaldo, features that famous “gollll Brasillll” sample. And Elayas’ ‘Gheorghe Boy’ tune, which refers to the amazing Gheorghe Hagi, samples a football commentator going on about the Romanian player’s top skills. But apart from more literal sampling, I think every tune does channel a bit of the player’s spirit on the pitch.

Remembering footballing heroes can be nostalgic. Was making the record a trip down memory lane in some respects?
Absolutely. In my own experience with football, again like music, the things you see or hear when you’re an early teenager tend to make a lasting impression on you. I’ll never forget being completely blown away hearing drum ‘n bass for the first time. In the same way, I’ll never forget the USA ‘94 World Cup. Don’t ask me anything about any other cup, but with ‘94 I freakily remember all of the details. I know who was playing, my brother and I completed the whole Panini sticker album, we watched every single game from start to finish, wrote down who the top scorers were. I remember Oleg Salenko scoring those five goals against Cameroon. There was that epic game that we (Belgium) played against our arch nemesis Holland, with Philippe Albert’s legendary goal (the Harry Baldi tune – funnily a cover version of South African track ‘Jack’s Jive’ by Riff – references what legendary Belgian commentator Rik De Saedeleir shouted out live on TV), Baggio’s penalty miss. All of it! I get nostalgic even just typing this out. 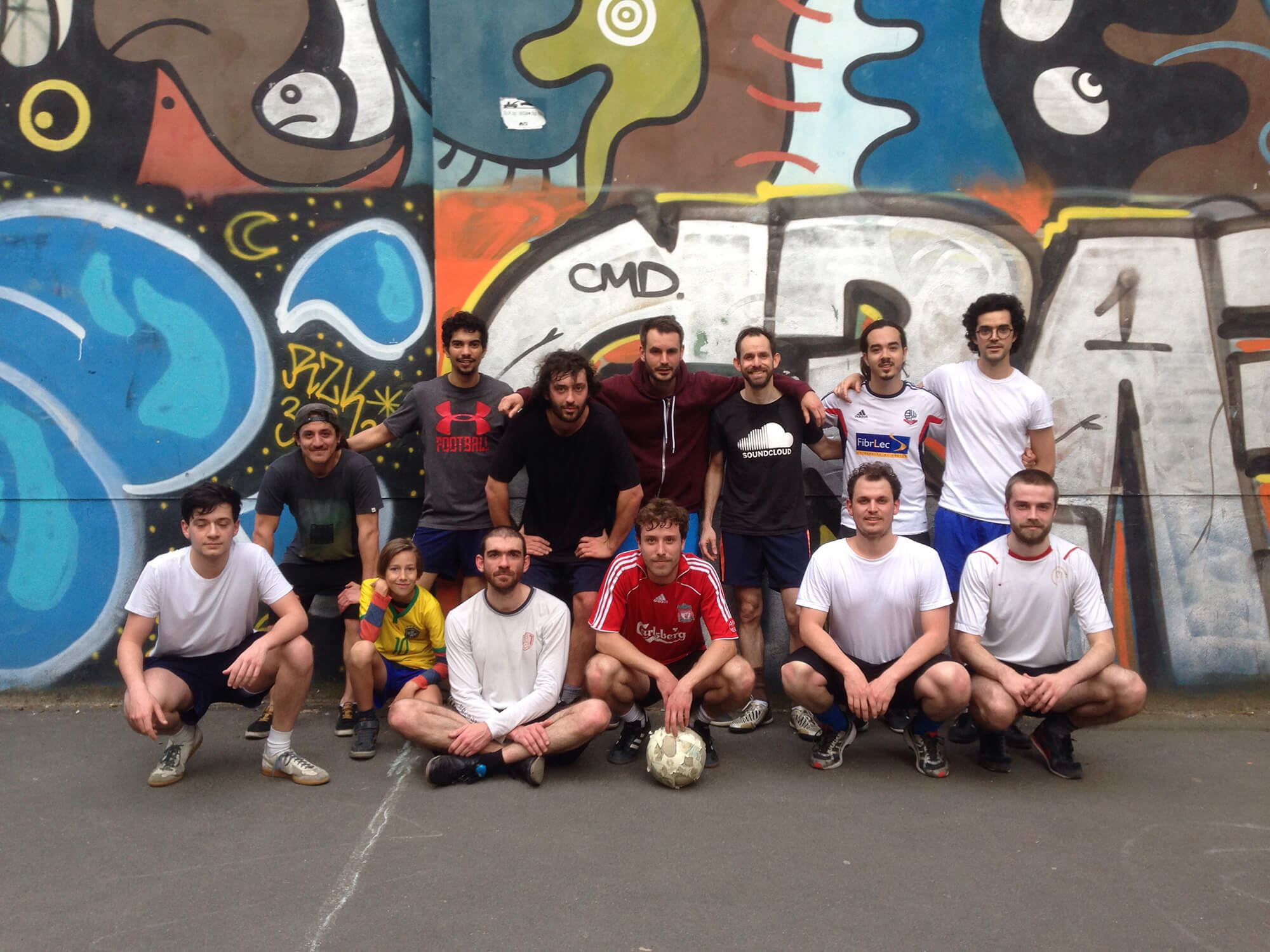 Your tune about Romario – why is he your hero, and what is it about his pants that inspired you?
Going back to the former question, Romario was one of the absolute rulers of the ‘94 World Cup. From the start, Brazil was the team to watch and I was at least a little bit obsessed with the short striker. Just like fat Ronaldo after him (who played alongside Belgian talent Luc Nilis), Romario was a talented Brazilian that played for PSV Eindhoven early in his career. I’m pretty sure I had a Romario poster in my childhood room.

Fast forward 25 years and in 2019, Kong and I are running the ensemble label out of Berlin/Brussels. For our summer party at ://about blank, we invited Djax-Up-Beats producer Stefan Robbers, aka Terrace, from Eindhoven to play a live set. As I drove Stefan to the venue, we were talking music and eventually…football. He told me the most amazing story. As mentioned, Romario was quite short. Apparently, he found it impossible to find pants that fit him during his time in Eindhoven, since the Dutch are generally so tall. That’s why he always needed his pants to be shortened…The woman responsible for sewing and cutting Romario’s pants? Right, Stefan Robbers’ mother! So, as a little kid a bunch of Romario’s pants would always be lying around the house.

George Best might have liked his track, I thought he may have been one to enjoy a techno club.

Seven different nationalities on the record, do you think you can hear the influence in the tunes?
I think so, but I’ll leave this up to the listener.

I definitely discovered a few new names through the record. Did you find yourselves learning more about obscure world football?
Absolutely. As I said before, my footie knowledge is mostly restricted to the ‘94 World Cup, as well as some big teams I’ve always followed like FC Barcelona. Researching the tracks’ player names was a super fun job. I would kindly invite everyone to do the same. Like Nemorna suggested to me, I’d recommend you check some of Yeboah’s mouth watering goals for Leeds. For further reference, ‘The Flying Dutchman’ refers to number 14, Johann Cruijff, and Juliano’s ‘Discorentin Martins’ is a muscular tribute to Corentin Martins (nicknamed “Coco Martins”) who used to score amazing goals for French club Auxerre.

What was behind the decision to press the tunes on vinyl and do a club sampler?
The initial idea was to feature all 11 tracks on wax. Unfortunately, it’s extremely hard to sell double LP compilations these days. I mean, it’s already difficult to sell a 12-inch. That’s why I narrowed the selection down to a few tracks and did a vinyl sampler. Honestly, I like the tracks that didn’t make the vinyl cut just as much. I was just thinking the other day that the other six could have been on the sampler just as easily. Even though the record only hosts a selection, I wanted to make it clear that the whole release encompasses 11 tracks by including the full Mannschaft on the vinyl sleeve artwork, as well as granting everyone that buys it a code to download the full release in prime quality. 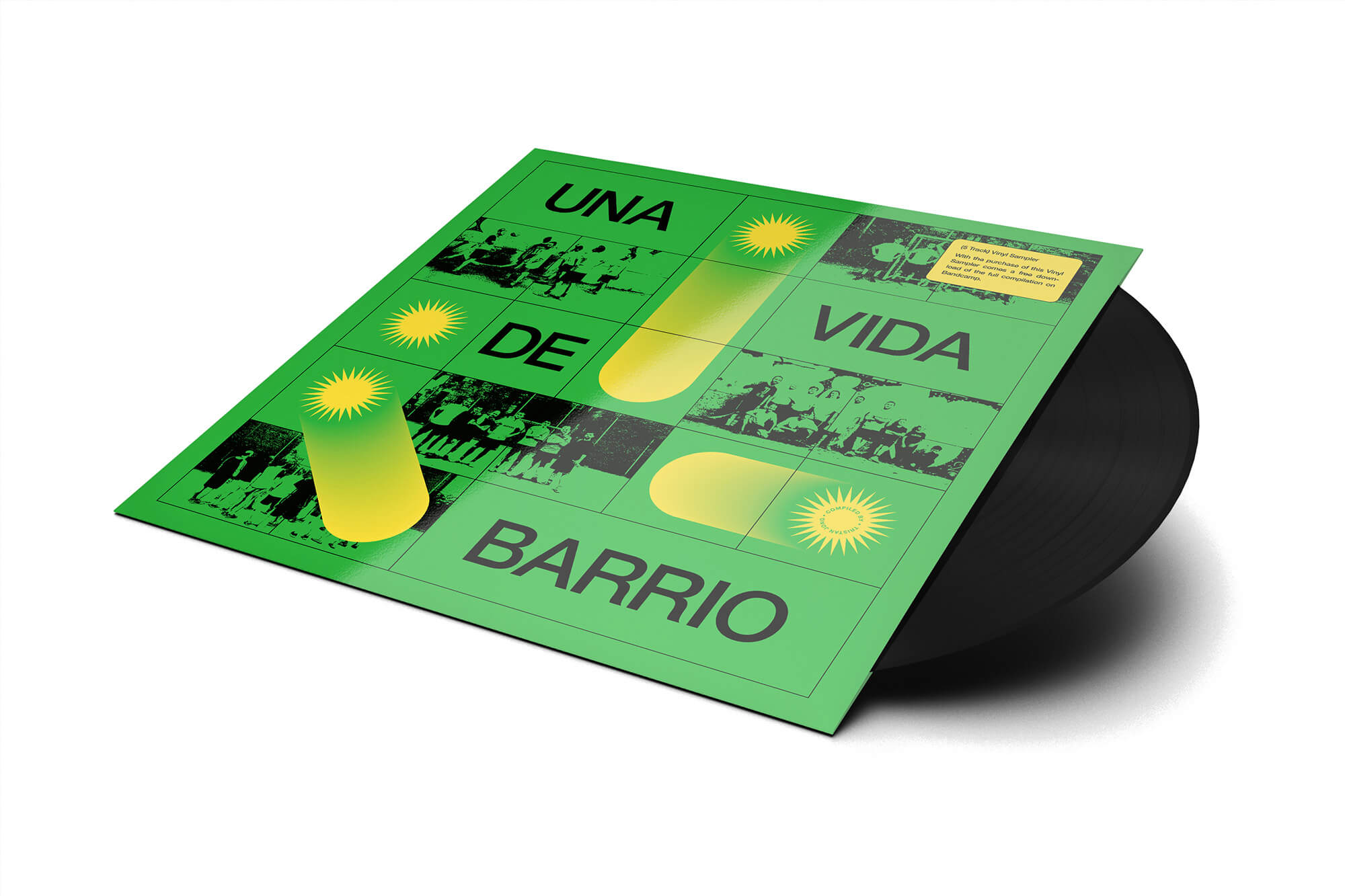 How did the launch go? Was it nice to finally play some of the tunes out?
The launch (thanks Urban Spree for hosting us) was lovely. It was a seated event, so everyone was just vibing, chatting away, and listening to the DJ sets. We sold a few records, which was great. Our friends Nano (artwork), Moomin (mastering), and Delfonic (Wordandsound, who helped with the release) also played records. It was like a big family event. The only minus was that we couldn’t play a wee footie game, actually. But now that the record is out, I hope we can get back to our core business as soon as possible! If any team out there wants to challenge us for a match, we’d be more than up for it.

Which player out of the 11 do you think would dig the record the most?
Great question. I suspect most of them would probably enjoy the track named after them. George Best might have liked his track, I thought he may have been one to enjoy a techno club.

Do you have any plans to share the LP with the players that are still with us?
We do, actually! The only detail is we don’t have any of the players’ phone numbers. If anyone does, please get in touch. Or WAGs reading through, feel free to inform your husband!

You can buy the digital album and the vinyl via Bandcamp. 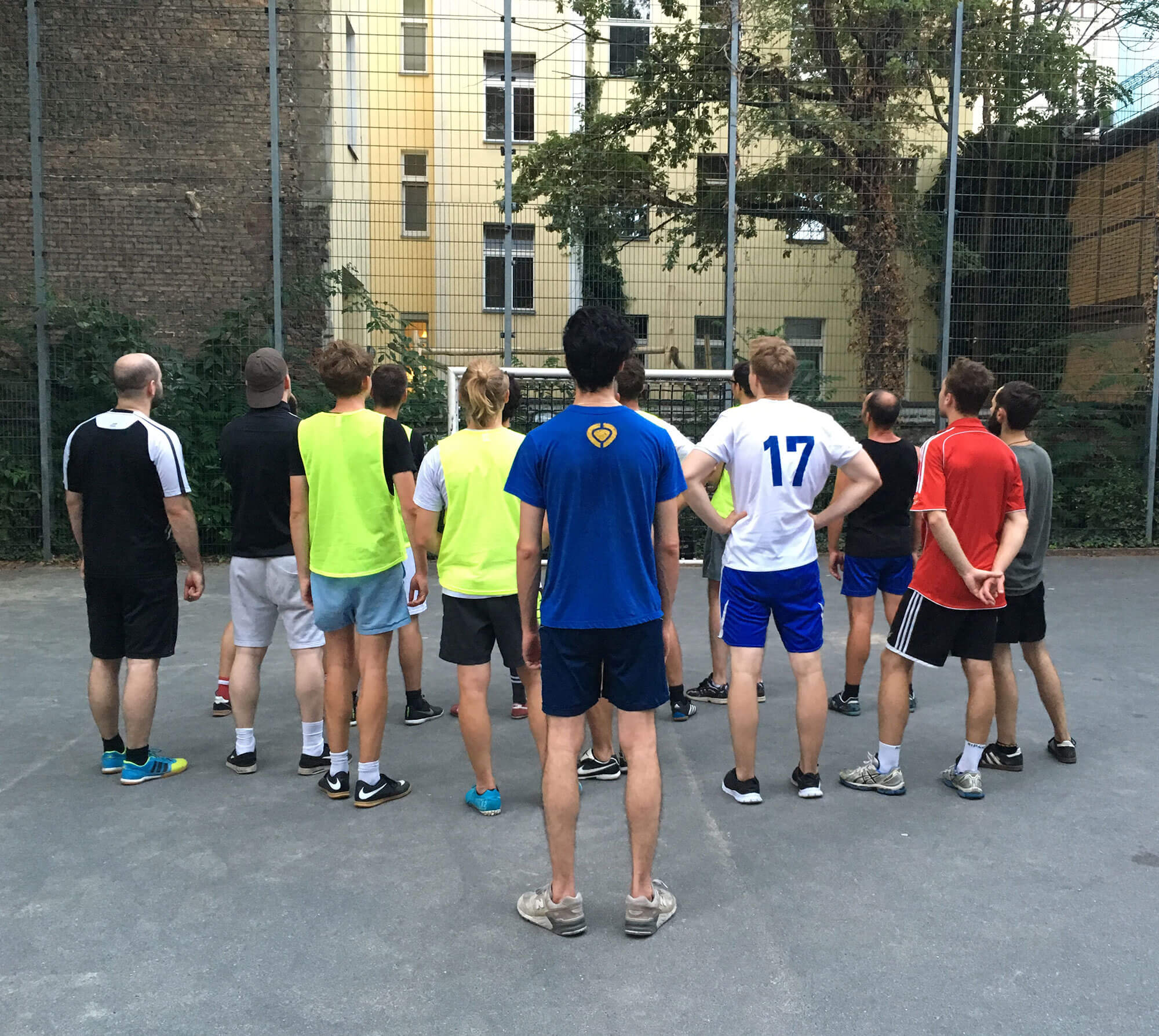