The Queen of Filth

Genderfluid hillbilly Christeene is coming for you 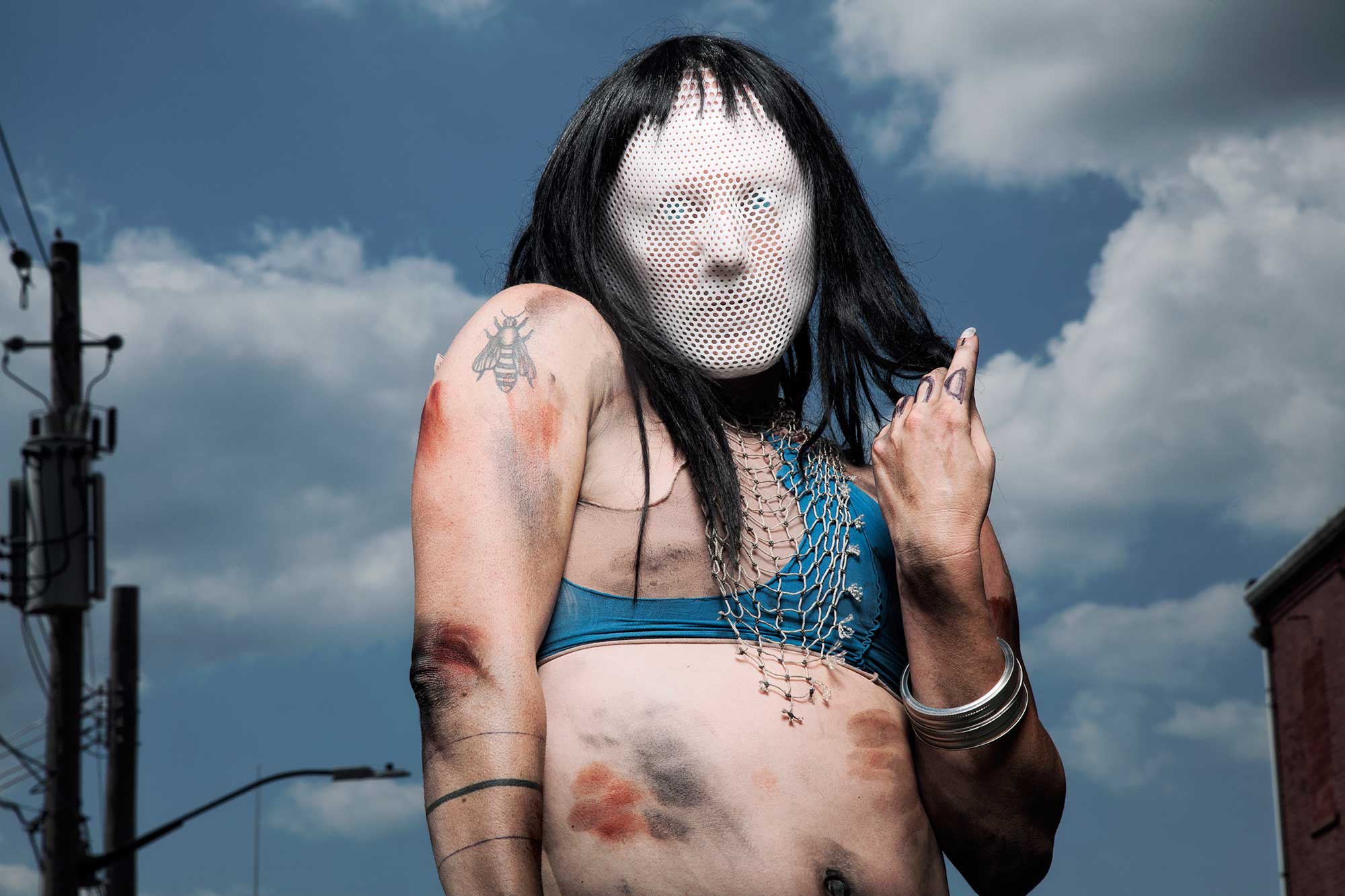 Christeene is back on tour and she’s coming to Berlin. The genderfluid hillbilly is known as a terror drag, a provocateur and a darling of the underground. She’s never afraid to make a spectacle and never shy of sharing her opinions.

Sporting a disturbed look of stitched together trash and torn fishnets, the always dirty and always loud Chritsteene is a remarkable piece of art. She makes gritty electronica with hypnotic beats, overlaid with her southeren word magic; picking apart hypocritical politics, outdated gender norms and sex negativity. Christeene calls it how she sees it.

Her first album, Waste Up Kneez Down, was released in 2012 and is a colorful sexcapade with more than its fair share of shock value. Her second record, Basura, followed in 2018 and revealed a deeper and darker side of the queer icon. Touring the US and Europe, Christeene has created a real community. Much like Lady Gaga dubbed her fans little monsters, Christeene calls her devotees little ponies, referring to the magical and beautiful pony that is inside all of us. She also speaks of a chicken or a bird in her throat that keeps talking to her, singing lullabies and battle hymns.

Our Sex Life Editor Kate Lis spoke with Christeene ahead of her Berlin show to find out what keeps her going, the role that anger has played in her development, why her audiences love to be covered in her bodily fluids, and way more. 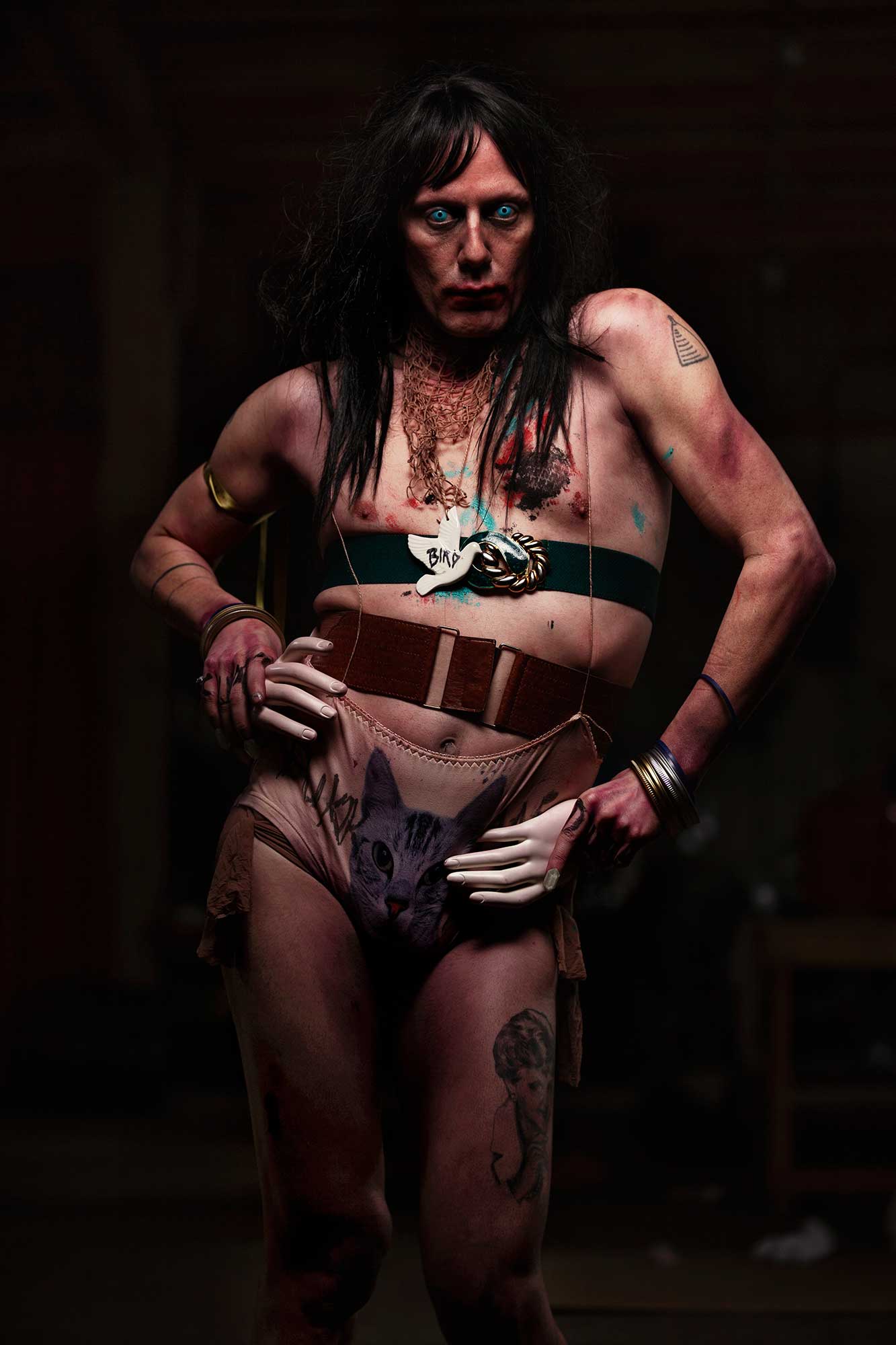 Kate: You’re currently living in London – why not Berlin? Seems the Berlin queer scene would be right up your alley?
Christeene: It’s just the way the cards were dealt. Everyone has their own adventure and London has always been really kind to me. These really magical opportunities opened up and there just happened to be a little hole I could crawl into when I’m here, so I just said ‘Hell yeah’. If holes open up in other places, I will definitely sniff them out. I have a very nice love for London and the old punks in it. I don’t have any signs on my forward trajectory that I’m going to be living in Berlin right now. I like to visit, lots of good friends are there and I think for me it’s a nice slow bubbling build. It’s kinda like one of my relationship partners that is taking its time, and I like that. Berlin will attach to your soul much faster than any other city I’ve been to, so I have to take this drug slowly.

The local synth wave, non-binary band Hyenaz isyour support band here in Berlin. Do you like to involve local artists on your tours?
I like to involve anybody who can jump off a good platform and have some fun. I know Hyenaz from years ago when we performed at SXSW in Austin, Texas, where I used to live. I really like having family up on stage – people I worked with and people I care about. I’ve known those awesome fools for a long time and I thought it would be nice to share the fucked up space with them. 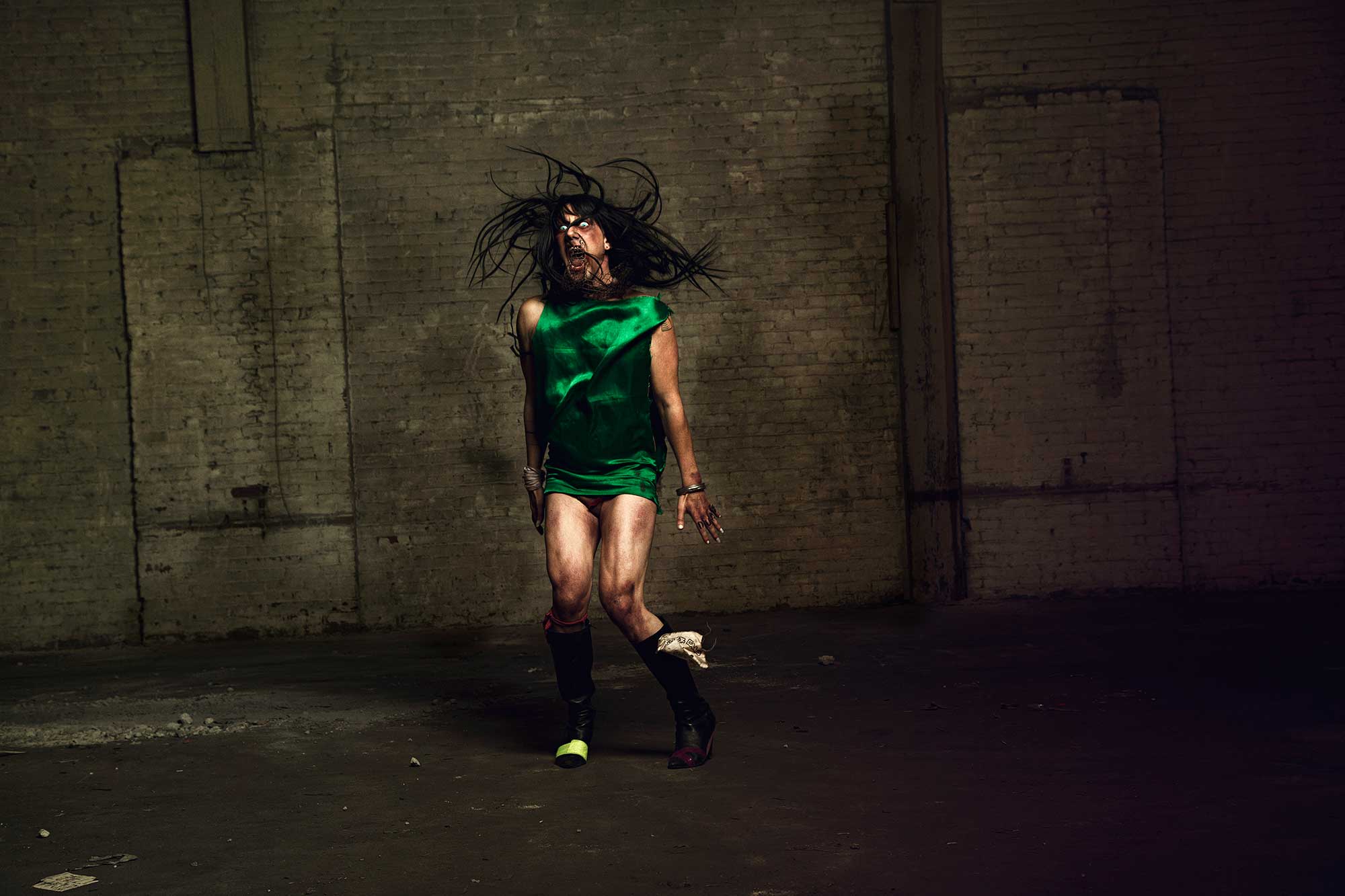 Last time you were in the city, you played Berghain and invited everyone to go to a bar with you after the show. Did that actually happen and what do you get from these experiences?
Oh God yeah there was a karaoke bar down the street, so that was kind of cool. Karaoke bars are kind of weird for me, cause I don’t understand them sometimes, but I went in and hung out a lot. I’m not a green room queen at all, I like to go and hang out in the club before and after the show because the whole reason I’m doing this is to meet the people and hear what the people are going through and what they need out of this world right now to survive. I like to know how to supply that properly. It should be about community building, so you can’t focus too much on just yourself. Just worrying about your own little pyramid you’re building doesn’t work that way, because that shit don’t hold without community.

Well let’s see what happens when you’ve grown a massive community…
Then we’ll overthrow this patriarchal society and fix this fucking world!

Hell yeah! I’m rooting for you. But back to the show: how much improvisation do you allow for on stage?
I always tell people; don’t bring any expectations, just bring everything you got! As I said, I like to talk to people and I like to know and understand as best I can, what everyone is going through in this weird world. Any time I’m talking on stage, that’s just coming straight out of my ass and my heart. I don’t write that shit. The only thing that’s planned is the songs and that shit don’t change. So that’s kind of like my script, but the rest of it is just the way I feel and what we are going through.

It's nice to have bodily fluids thrown over you, it's nice to be screamed at in your face.

Your audience generally puts up with a lot, especially body fluids, and they love it. How do you balance the provocation and insults and dealing out the love at the same time?
I don’t think I ever insult people. There has never been a time where I’ve torn you up verbally for who you are. It’s about what we’re going through and whether you’re doing it with the opportunities that you have. What are you doing with the space that you’ve taken up? How do you best pull-up the rest with you? I feel people respond to that. I feel like, when I’m in a room with these people, they are hungry for that. It’s nice to have bodily fluids thrown over you, it’s nice to be screamed at in your face, to feel the heat, and to feel the thrust of it. Because everything is so soft now, in the way that they try to “take care of us”. We’re not exposed to the realities of the world. So I just try to give you a bit of the reality on stage, through the music and the energy, so you can wake the fuck up and then go out there with the real tragedies of the world. 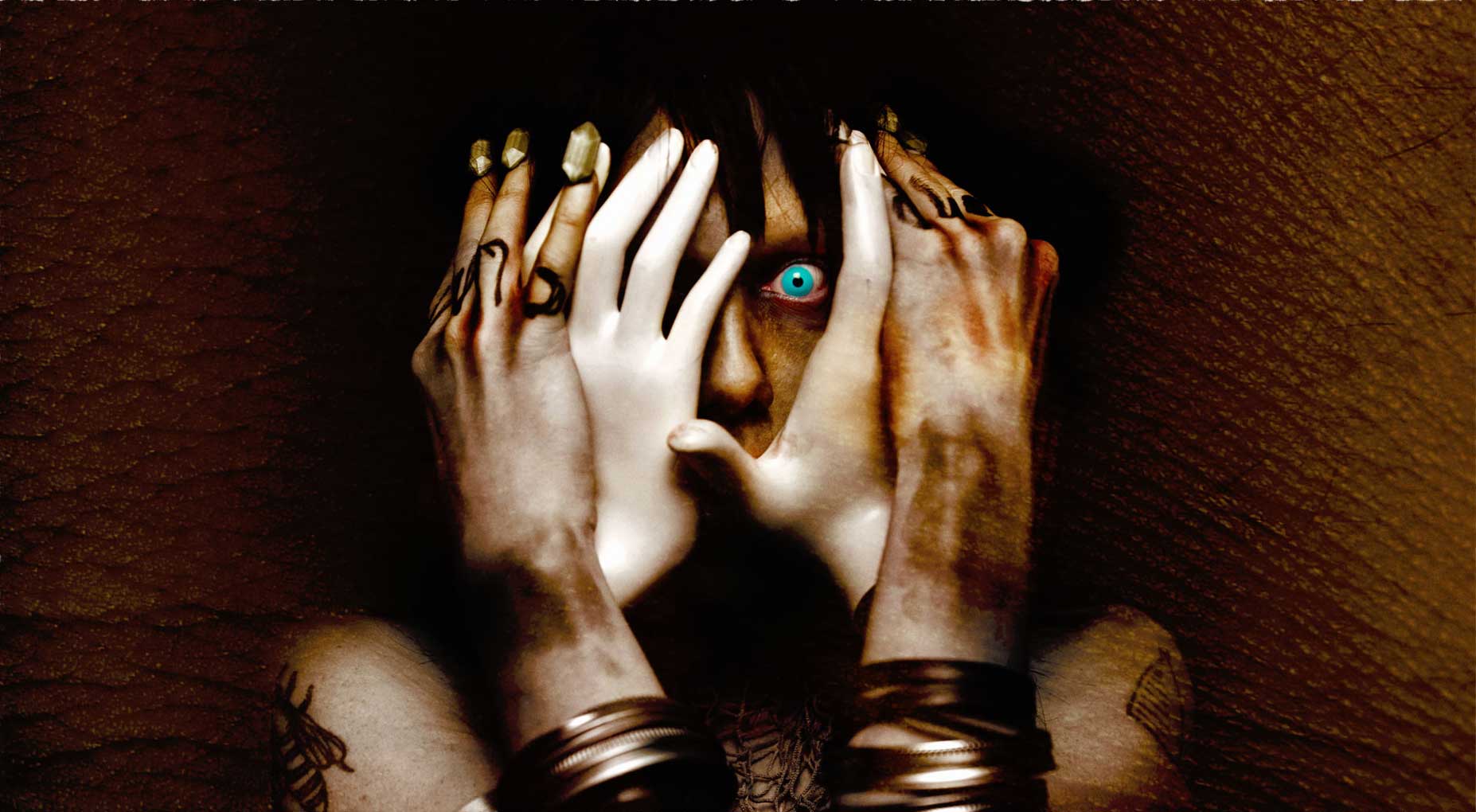 You use explicit sexuality in your artform. Why is queer sexuality so powerful, and what are your thoughts on expressing that sexuality on stage?
We’re all animals and we’re all humans. In this religious patriarchal layered society, sexuality is the one thing that is going to get cramped down into the shitter. So I think it’s very important for us to tap in and feel the heat of our own personal sexual expression. Everybody has their own and they are unique, but they have just been told that they have to be a certain way. Since your mama shot you out, you’re supposed to be a certain way. If you design a style of living, up on that stage, it screams out all forms of ridiculous, greasy, unallowed perversions and sexualities. Hopefully, that will inspire you to go exploring in the caves of sexuality. What I have learned from the wonderful crowd is that they are very eager to do that. I like to share my aggressive feelings of sexuality and some soft ones too, those things that wake up the animal inside of you.

You’ve mentioned before that Christeene was born out of anger. Is she still angry? Will the anger ever be gone?
I think anger was a part of the world I came from. In the memories that I have, there is also curiosity and fascination with this fucked up machine that we’re in. Anger can make people do many different things, and people express their anger in very different ways. I just feel that the way I can express my anger is through these things that we’re talking about, instead of going and taking away someone’s space, smacking someone across the face or pulling a gun on somebody. That is some poorly projected anger. Ain’t nothing wrong with anger, it’s just how you choose to deliver that or process that in dealing with your own shit. I come from some anger for sure. I definitely listen to the room and myself and figure out the best way to slap that anger all over you and make you inspired.

You’ve talked about Christeene as a vessel for our sins, like a martyr. How do you release all those sins? And how do you keep yourself sane?
Oh I just keep going. It’s an exchange – I put it out there and then the crowd puts it back on me. As long as there is a healthy exchange, I mean, healthy is a loose word, but as long as there is that exchange, then that is how I survive. It’s what keeps me going – people getting the fuck out of their homes and turning up to shows, and not just mine but everybody’s. Because that’s the only way. Today we have to really communicate with each other honestly, without any kind of manipulation from an ‘intelligent source’ of technology controlling our conversation. So if people keep showing up and putting that heat underneath them and directing all their anger and their sex and their happy feelings too – then I can keep on going. It sure as fuck keeps me sane and kicking for sure 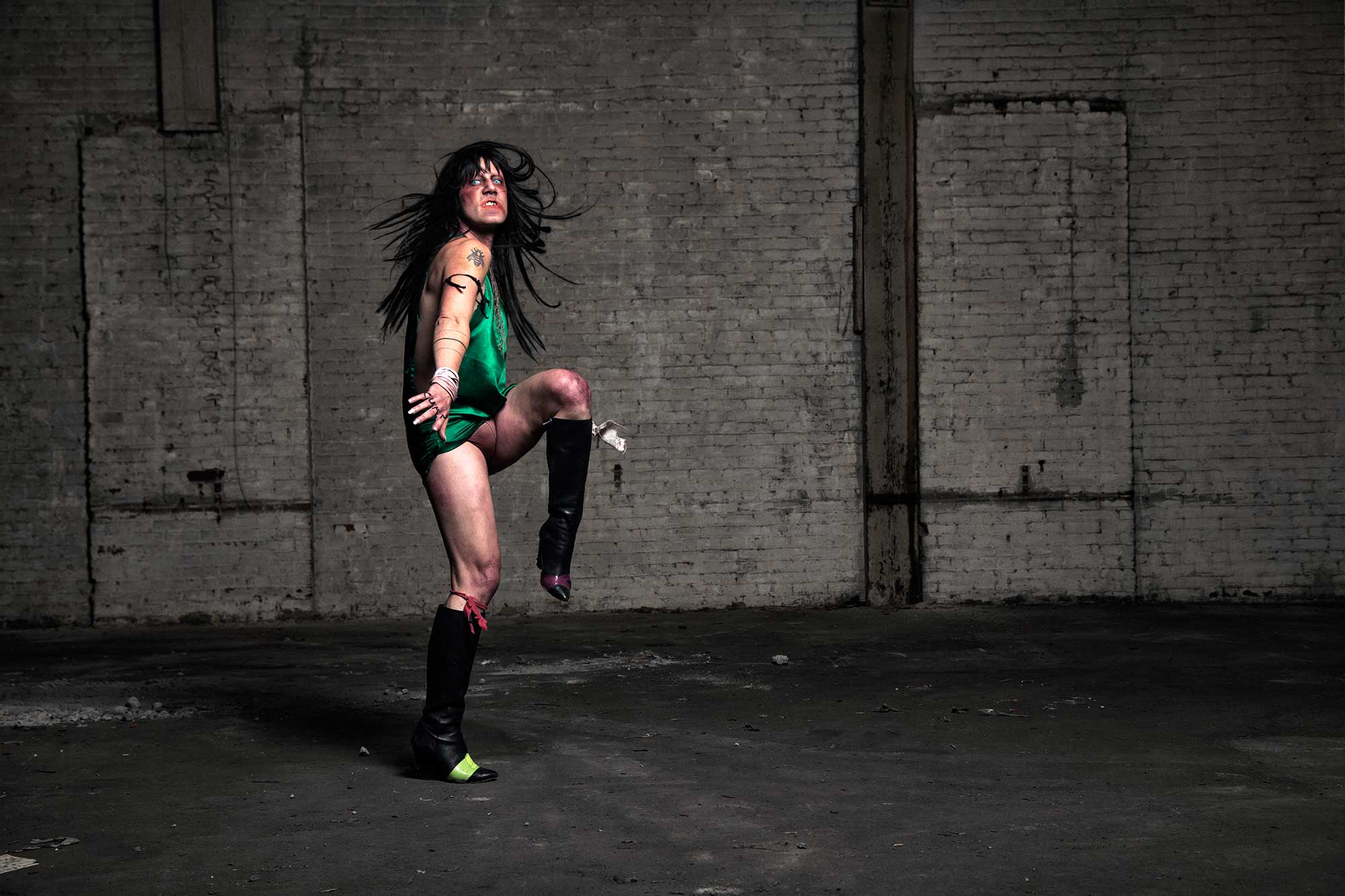