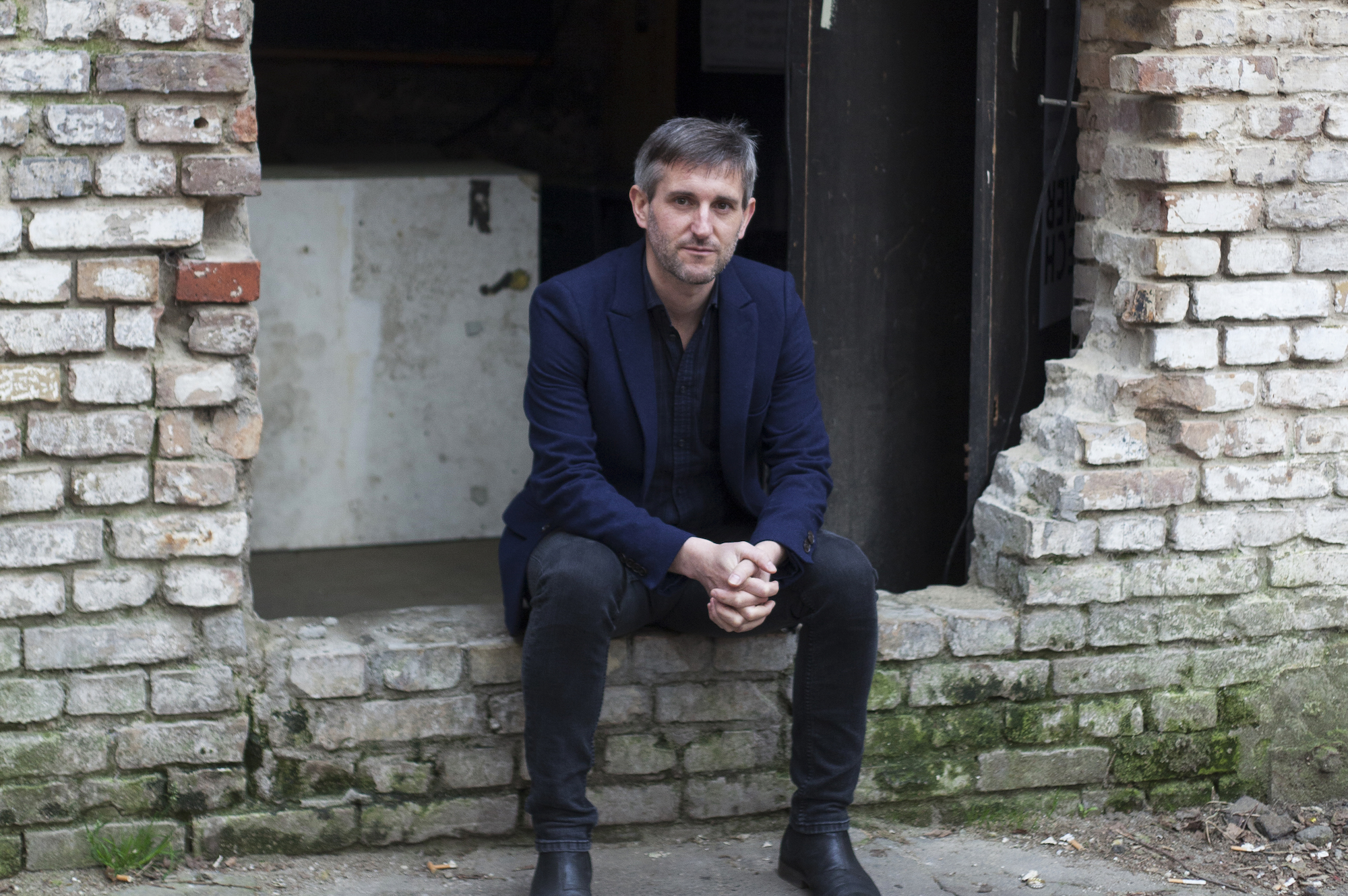 Cranky Booking is synonymous with quality independent music in Berlin. When you see ‘Cranky Presents’ on a gig poster, you know that even if you’ve never heard the bands before, they will certainly be worth seeing. The same goes for Späti Palace – a record label that showcases some of the best indie music in Berlin with each release. Barry Cliffe is a driving force behind both ventures, powering them with his passion for music and the spirit of the city he’s come to call home.

Sometimes it’s a mix of hard work and happenstance that allows someone to discover their true calling, and this is surely the case for Barry Cliffe. Originally from Dungarvan on the southern coast of Ireland, Barry moved to Cork for university in the mid ‘90s but, despite the halfway decent indie music scene that was burgeoning in the city at the time, he knew it wasn’t really the place for him. “Cork is really nice and a good city to live in,” he explains, “but the property boom was in full swing and things were getting out of control; robberies, people getting followed, beaten up and mugged, and the city centre on a Saturday morning was covered in vomit. It wasn’t good.”

I packed in my relationship, my job, everything, and left town. I went travelling and six weeks later found myself in Berlin.

In the early 2000s, Ireland was in the grip of real estate fever. It was big business, with people flipping houses or investing in developments left and right to board the gravy train, so to speak. Barry was noticing a knock-on effect that he didn’t like. “There was something changing about Ireland,” he says. “There was too much money around, things were becoming so different from the environment that I had grown up in and I didn’t want to stick around to see what would happen. Everybody was just so full of themselves, and it was all based on how much cash they had in their pocket. I expect more from life than that.” With most people employing an ‘if you can’t beat them, join them’ attitude and getting in on the property game, Barry had a different idea: “I packed in my relationship, my job, everything, and left town. I went travelling and six weeks later found myself in Berlin. I thought straight away, ‘This is somewhere I can breathe a little bit, there’s lots of space here and lots to do.’”

After making the move to Berlin, Barry spent his first few years working various jobs and enjoying the lifestyle. He underwent the obligatory techno induction, dancing at free techno parties outside until the sun came up, marvelling at the unbridled freedom of Berlin. It was at one of his jobs where he met Dan Haak, an Australian who was to provide the spark that would ignite a new passion project.

Dissatisfied with the information available about local gigs, Dan decided to set up his own blog – Blitzgigs – to remedy the lack of information at the local level. Barry, who already knew most of the of the local venues and had a working knowledge of local bands, was a natural choice to join the team. Things spiralled quickly. “Within a couple of weeks I was just spending hours happily enjoying writing previews of gigs,” Barry remembers. “That was really enjoyable, telling people why to go to a gig instead of just reviewing it. Reviews of gigs I find somehow redundant now; a preview is much more important.”

As writing gig previews took Barry deeper into the live music scene, it revealed the impact that Blitzgigs was beginning to have. “I started to notice local bands playing support shows here and there,” he begins. “At that time, there were a lot of people moving to Berlin from all over, especially English speakers, and they were starting to form bands – really good ones at that. When they noticed that I’d written a preview of them, they were genuinely very grateful. It was then that I realised the lack of press for local stuff; people would be so thankful of the coverage because it just wasn’t there before.”

Meeting this demand for local press also made Barry aware of other gaps in the local music scene. “We had bands from outside Berlin writing to us at Blitzgigs trying to get some attention in the city. When someone is writing and asking you to book a tour for them when you’re obviously only a music blog, then you know there is something very wrong. There wasn’t necessarily a lack of people that were willing to book band tours, the bands just weren’t finding their way to them. I recognised a definite need for more shows for emerging local bands. I thought I could do it for them, and so I just started putting on my own gigs.” And with that, Cranky Booking was born.

Finding my own place within Berlin’s music community has been the most rewarding because I feel part of something, too.

The first Cranky Booking gig was in late 2011 at Knochenbox. Barry managed to fill the place and was even able to pay two local bands at the end of the night. Promoting live events is a notoriously difficult game, so to be able to pay two bands after your first show is an achievement in itself. These first successes gave Barry the break he needed and he started organising shows at Friedrichshain’s Antje Øklesund. They worked out straight away: “I did my first gig there in February 2012 and 100 people showed up. I was like ‘Jesus!’ You know, I put a lot of effort into it and people came.” Since then, Barry has been promoting non-stop, averaging almost 30 shows per year. As he describes it, it sounds like a hell of a ride: “It has been four years of great times. Seeing bands come and go, stay and develop, release records with other labels, meet and form other bands simultaneously.” For Barry, the process has been a rewarding one. “It really gave me a lot of pleasure to see that happen and to think, ‘Well, I helped a little bit towards all of these people getting together’, you know? Mostly I love working the entrance, giving people a welcome schnapps, talking to them and wandering around throughout the night, making sure it all runs smoothly. I suppose finding my own place within Berlin’s music community has been the most rewarding because I feel part of something, too.”

The success of the gigs revealed not only a demand from bands for this locally focused type of show, but an audience for them too. “There is a big crowd of people who are really into going to local gigs, and what I like the most is the quality of the crowd with all sorts of people mixing that you don’t really expect to find in one place. It happens all over Berlin, but it’s nice to see it at your own shows too. It’s also important for me to point out the quality of the bands; without them, it wouldn’t work, and I’ve been lucky to be able to champion more than a few new bands in town who have really impressed people. I guess people just don’t expect there to be such a high standard among local bands, so it’s always nice to see that stunned, impressed look on their faces. It’s nice to see them giving feedback to the bands and for me to get feedback from them too – it gives you a good buzz.”

One quickly realises that Barry’s motivation for working within the local music scene isn’t fuelled by money or recognition, but by identifying needs in the community that he is in a position to help fulfil. It was this motivation that led him to set up the record label Späti Palace with close friend Amande Dagod. After some notable success as a promoter, having a record label seemed like the logical next step: “You can get the bands a little bit more recognition, and then maybe they can get a booking agent and get put on tours. That’s the basic model that I realised needed to come out of booking the shows. We just offer them whatever is within our means, a small release that benefits both the label and the band, just to push it out a little further. One release feeds the next one; that’s basically the way we go.”

The Späti Palace releases to date

As Späti Palace doesn’t have the budget or scale of larger or more established record labels, Amande and Barry have come up with an inventive way of making sure the music gets out there. “As a label doing small editions, there is not much point giving the releases to record shops because then you have to keep track of them all. It takes too much time and effort when you have normal jobs too. Instead, we do a nice release show in a cool location that the band wants and then give away a cassette or CD with a download code as part of the entry fee. I feel that people should get something when it’s a release show, and people are into it too. It’s just another way to involve people; as a concert goer, it’s great to be spoken to nicely at the entrance and be given a tape or whatever, right? We have a nice community feeling, and it shows in the crowd’s reaction to the releases and the bands.”

This model is working for Amande and Barry. Progress is steady and building, much to Barry’s delight: “It has been very pleasing to see the label start to get more attention. After two and a half years it’s still early days, but we’re getting there. We’re hoping to do another vinyl release soon, hopefully in the autumn. It has been nice to learn how to have a label and what makes it work.”

I would love to open a venue, because it’s a question of creating it for the city and doing it right, not just opening another big money-making machine.

Finally, we asked Barry if there is anything he feels is missing in Berlin’s indie music scene, or where he thinks there might be room for development. “There’s a huge hole for a new venue. When Antje Øklesund gets torn down in the summer or autumn or who knows when, there will be a massive hole. Along with Schokoladen, it is very much like the home of alternative music in the city. I would love to open a venue, because it’s a question of creating it for the city and doing it right, not just opening another big money-making machine.”

There’s that motivation again: identifying a need in the community and finding a way to fulfil it. With the way things are going for Cranky Booking and Späti Palace, we wouldn’t put it past Barry to find himself running a venue in the not-too-distant future. We’re hoping he does, because if the ethos and style follow in the same vein, live indie music in Berlin is in safe hands.

The fifth annual Cranky Xmas Fest is taking place at Marie Antoinette on Saturday December 10. Hit Facebook to get the latest from Cranky Booking and Späti Palace.