The Artistic Vision of Sarah P.

A fearless and fierce approach to music 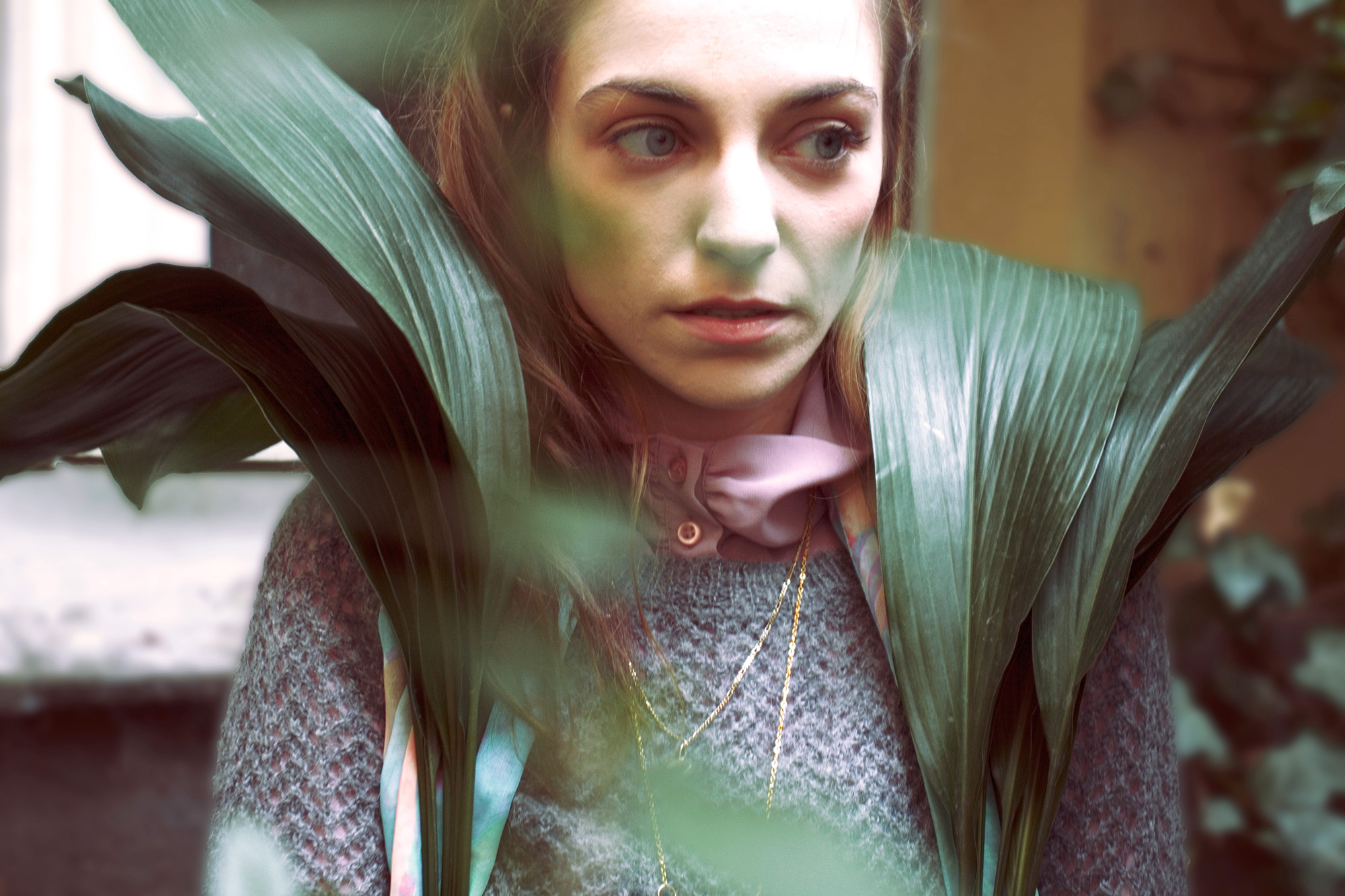 Amid a sea of male solo artists and all-male bands at a recent edition of DNA BLN – the showcase event focused on new music and art – one person stood out and shone brightly. She was set apart not only by the fact that she was the only female on the bill, but also by her captivating performance, unique look, and fresh sound.

The artist in question was Sarah P. On stage, she was a powerful presence, looking natural and at ease, yet totally alert and aware of her movements. Her dress was adorned with artificial flowers, and throughout the course of the performance she would pluck them from her dress, play with them in her hands and drop them to the floor. These moments were seemingly simple, but they were at once emotive, expressive, and engaging. She was accompanied by a three-piece band, the four of them playing electronica with a pop edge, traversing dancier territory with expressions of a whimsical and ethereal nature.

We wanted to learn more about the person behind the performance, to find out what drives the abundant creativity that was expressed so clearly on stage. It was time to meet Sarah P. 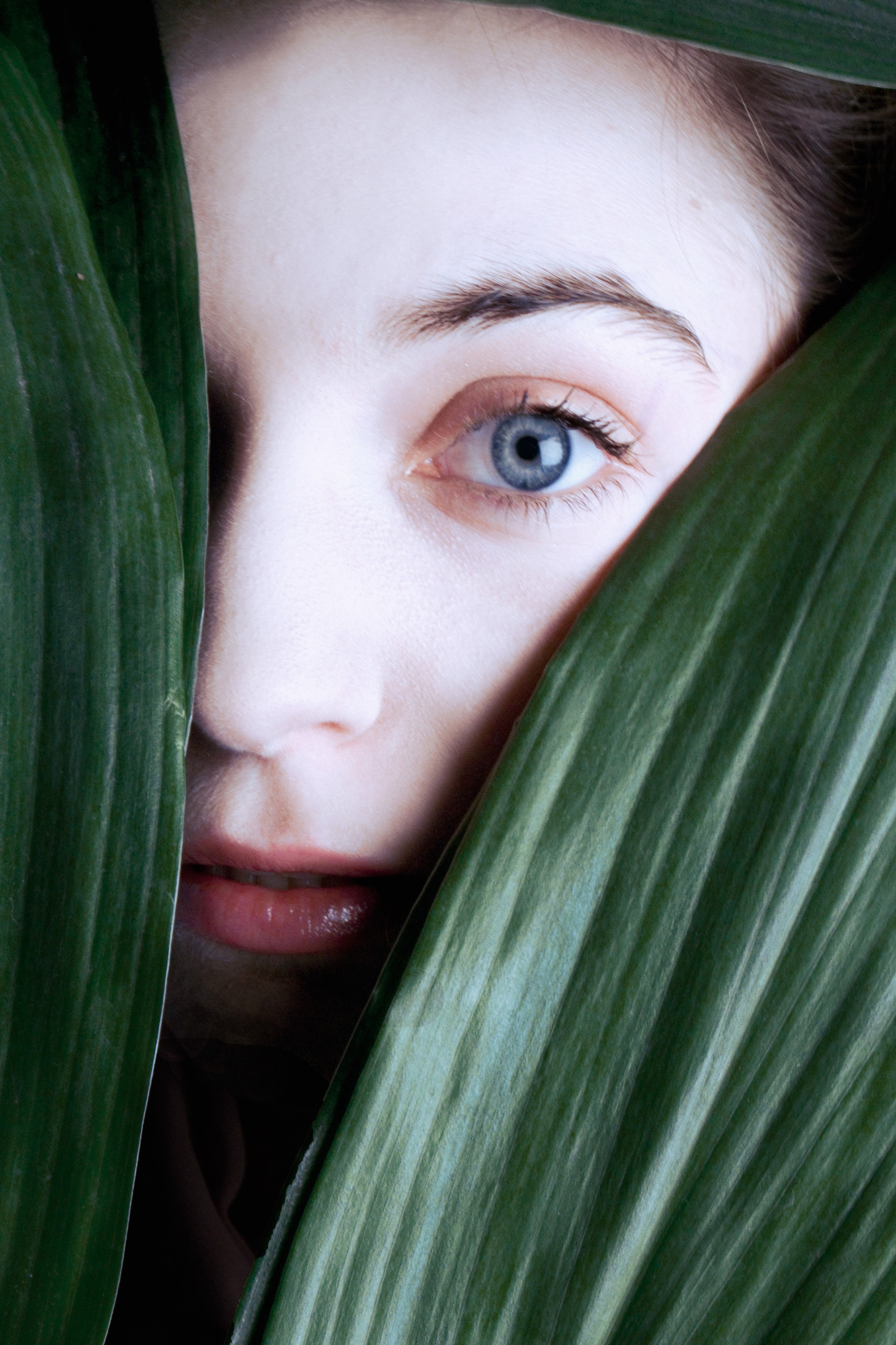 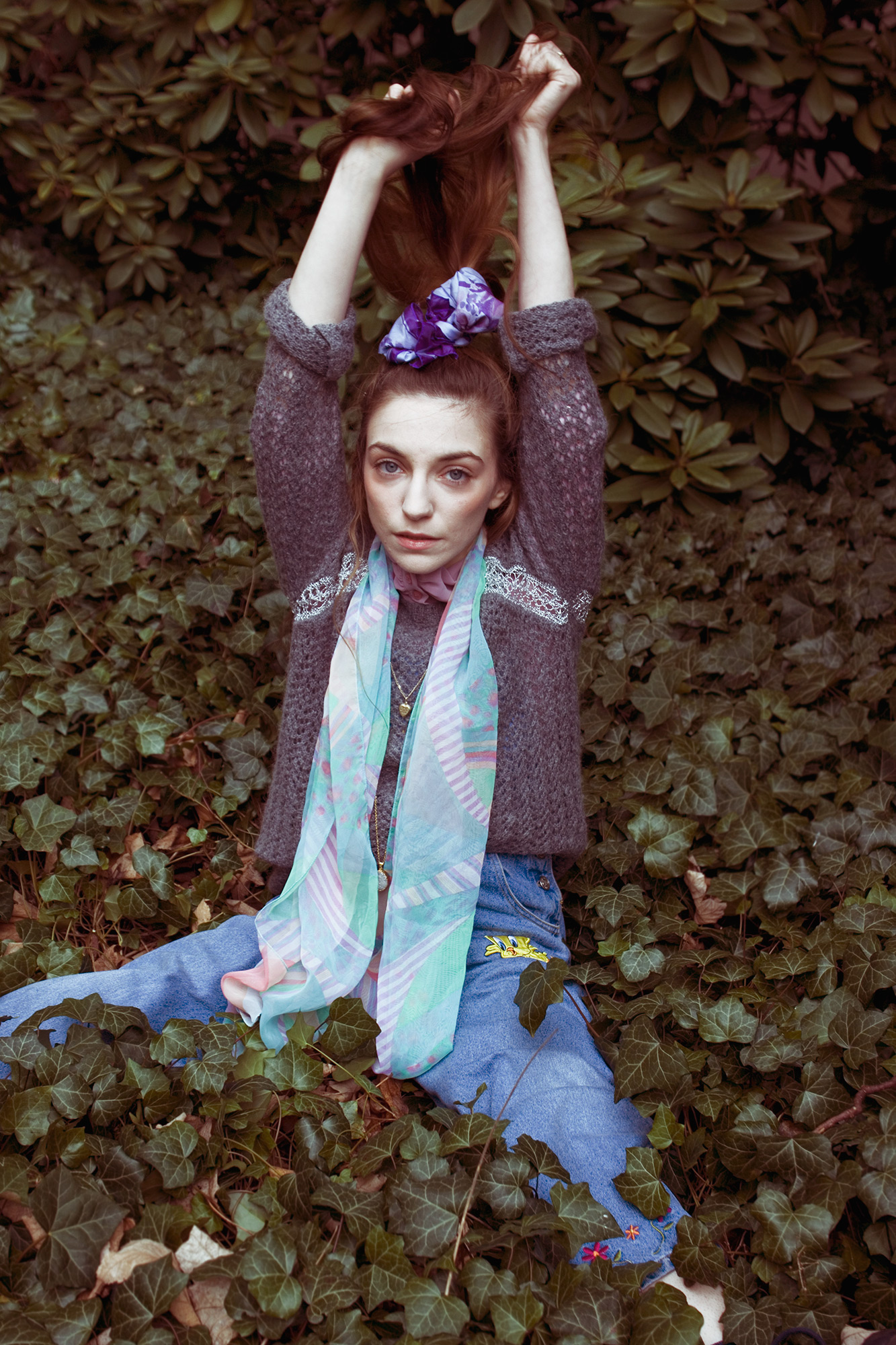 Off and on the stage, Sarah P. cuts a striking figure. She is petite in stature and carries herself with strength and poise. During our conversation, her responses are considered and deliberate. She doesn’t rush, taking time to think about what she wants to say – it’s apparent that Sarah has a clear idea of how she wants to present herself and her art. It isn’t that she is in any way contrived, far from it; rather, she has a clear vision and goal. It feels like she has been steadily working towards the point at which she presently finds herself, and it is the culmination of a lot of learning along the way.

Born in Athens, Sarah grew up as the only child of her devoted parents. Her father was an amateur singer–songwriter, and from a very early age he would encourage Sarah to sing with him, the two often recording duets together on tape. Singing became a staple of her life, and she performed in choirs as well as taking piano lessons. Although her parents were encouraging of her musical education, Sarah believed that music would remain a hobby and she initially pursued a career as an actress.

I didn't have anything to lose and I wanted to try something new.

Acting has remained part of her life and work, but in 2010 a chance meeting would pull her into the music world and hold her there. Through a mutual friend, she was introduced to music producer RΠЯ. He was looking for a singer for a new project and he really liked Sarah’s voice. From here, she took the chance to become frontwoman of the duo that became Keep Shelly In Athens. For Sarah, the opportunity came along at the perfect moment. “I was 18 or 19 years old and my parents were getting separated,” she explains. “It was my final year of acting school and I just needed an escape, a way to get out of it all.”

It marked the beginning of a whirlwind period for Sarah. Keep Shelly In Athens quickly garnered praise and press. Their style of chillwave was in tune with the zeitgeist of the time, setting them alongside acts such as Washed Out, Neon Indian, and Toro Y Moi who were grouped under the then-burgeoning genre. It put them on the receiving end of much internet hype that would help take them on tours of Europe and North America. The pair released two albums together, along with remixes and guest appearances on other records. The creative duties were split between the duo. “RΠЯ would write the music and the vocal lines and I would write the lyrics; then we would go to a studio and perform the songs,” Sarah explains. “I’d also take care of everything that comes with being the frontperson of a band.”

Coming straight from university with no experience of the music industry, Sarah really made the most of this time. “I was almost like a sponge; any information was good information. I was grateful for the chance, and it was a great school for me,” she says. Over the coming years, Sarah got to know more about the business side of music, how it operates and how things run. As with a lot of learning experiences, once you acquire the knowledge it can change the way you think and feel, and in January 2014, she announced that she had decided to leave Keep Shelly In Athens. “I guess that I grew up and grew out of it,” she says. “I used this information to become more knowledgeable about the structural parts of the music business. RΠЯ and I were not on the same page anymore. That’s honest and it happens.”

After leaving the band, Sarah became involved in a new musical project, which is what brought her to Berlin. It was another case of seizing an opportunity that came her way: “I didn’t have anything to lose and I wanted to try something new. Everybody said that Berlin would suit me so much so I said I’d give it a go, and if it didn’t work out I’d move back to Athens or [go] somewhere else.” 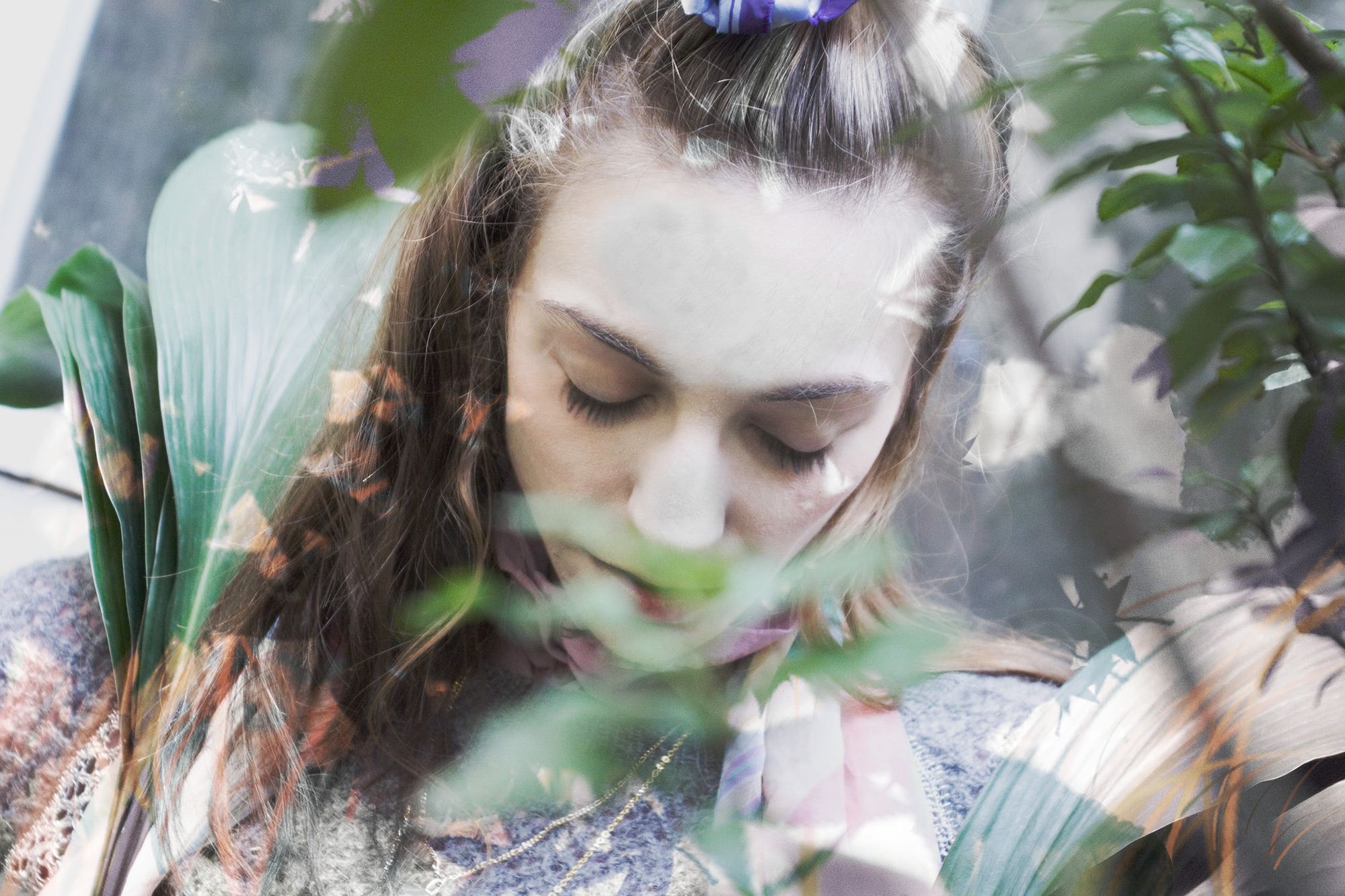 While the project didn’t get off the ground, Sarah decided to stay in Berlin and started working on solo projects. This was another learning process, with Sarah journeying deeper into the role of producer as well as songwriter. It seems as though this is a strong trait of Sarah’s – an innate desire to work things out for herself and understand the mechanics. It’s a desire that even led her all the way to starting her own record label. From leaving Keep Shelly In Athens in early 2014, to producing fully-fledged solo material later the same year, to releasing her debut EP Free on her own EraseRestart label in December 2015 – the last couple of years have been meteoric for Sarah.

Taking control of her life and career in this way has had a great effect on her. “Creatively, I feel empowered by learning and practicing on my own,” she tells us. “I also feel empowered from the business side, through having my own label, taking care of everything, and having a basic knowledge of what my rights are. I feel that this is most important.” Familiarity with the law is key for Sarah, and she is keen to pass on her learning. “If there is any advice that I would give to anybody in the world, it is to get educated about their rights and what they own. This, and having a good lawyer, are the most important things.”

Whoever says that they don't want to reach all the people out there shouldn't be making music, in my opinion.

Right now, Sarah is working towards releasing her debut album. She has penned all of the songs and is deep in the recording process. Thematically, she is influenced by the current state of the world and events that are unfolding every day. She is aware of how this may be unusual: “I realised that there are not that many songs written about politics and about society. There is no commentary,” she continues, “I find it very sad because these are historical times we are living in. I mean, of course we are all inspired by our relationships with other people but there are other things. There can be a song about the ex-boyfriend or girlfriend but there can also be a song about what’s happening in North Africa.”

There is a distinct lack of fear in Sarah’s approach to the music business, and to life in general, for that matter. She is ready and willing to face everything head-on. It’s an admirable attitude and one that is taking Sarah places that she clearly wants to go, as she explains: “Whoever says that they don’t want to reach all the people out there shouldn’t be making music, in my opinion. So of course my ambitions are big, but to make them happen you need a method, and this is what I’m working on at the moment. But I have great ambitions.” We would say ‘more power to her,’ but we think she might have more than enough.