“Do what you love every day”

The mantra that fuels DJ/producer and Disco Halal boss Moscoman 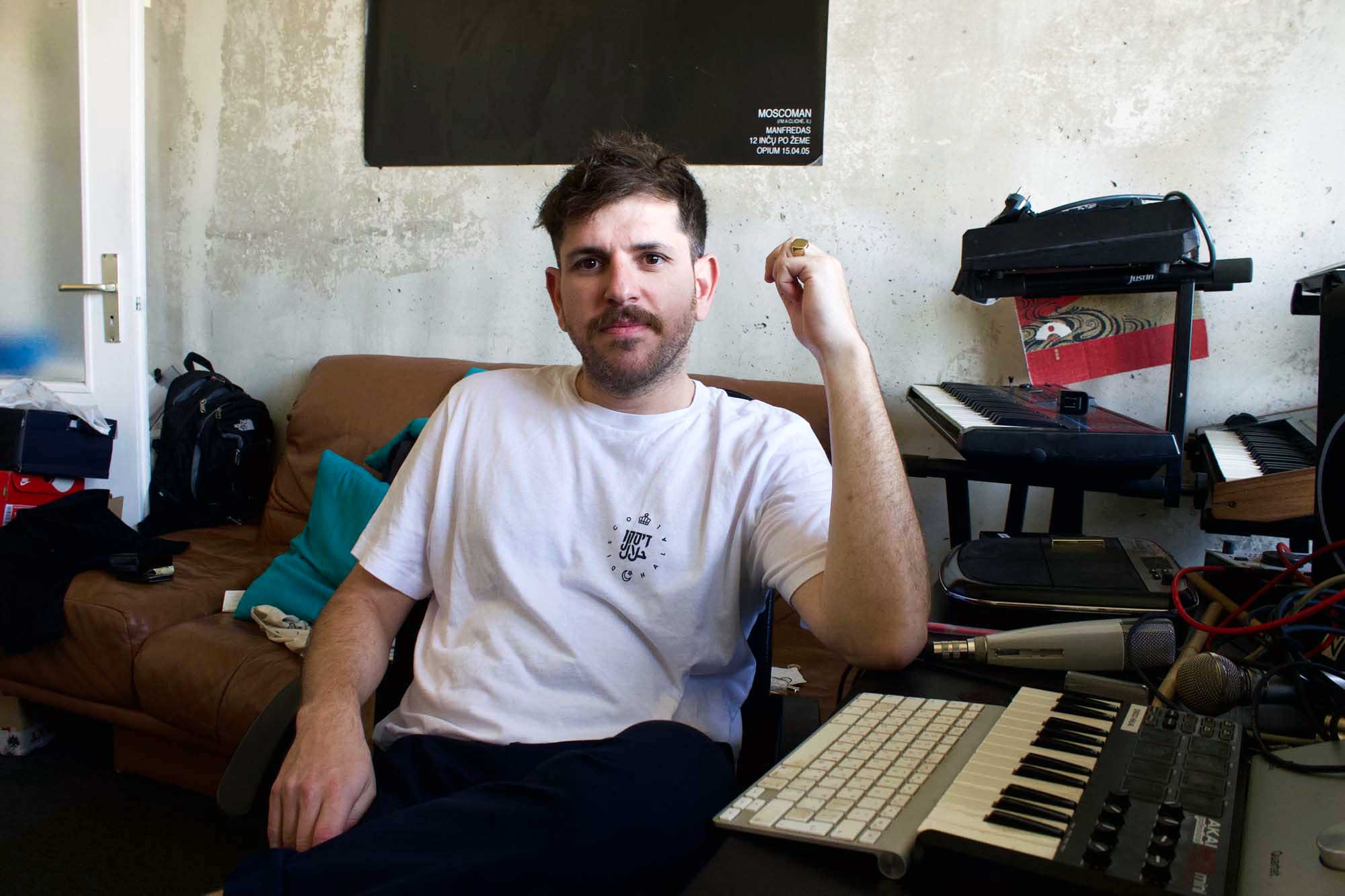 How do you define making it in the electronic world? For some, it’s mingling with celebrities at yacht parties in Ibiza. For Moscoman, it’s something else entirely. He may be one of alternative club culture’s leading DJs/producers but he stays down to earth by leading a simple life and focusing on what came first: the music.

“Look at this beauty!” exclaims Chen Moscovici’s girlfriend, holding an aubergine aloft. The Israeli artist and photographer, who prefers to keep her name out of the spotlight, has returned to their spacious, top-floor Mitte apartment with a feast of vegetables for lunch. “It’s beautiful,” Chen agrees, before they switch to Hebrew to finish their cooking plans.

Cooing over crops is nothing unusual in this home, as Chen credits a holistic approach for balancing out his late-night lifestyle as a regularly touring DJ around Europe. His packed schedule, as owner of the acclaimed record label Disco Halal and artist under the moniker Moscoman, leaves little time for rest. “This Friday when I leave home to do some DJ gigs around Europe, I know I won’t sleep until I come back on Monday evening,” he says. “There is no time for sleep. Most of the job as a DJ involves travelling and staying in hotels, which looks glamorous but it’s not. 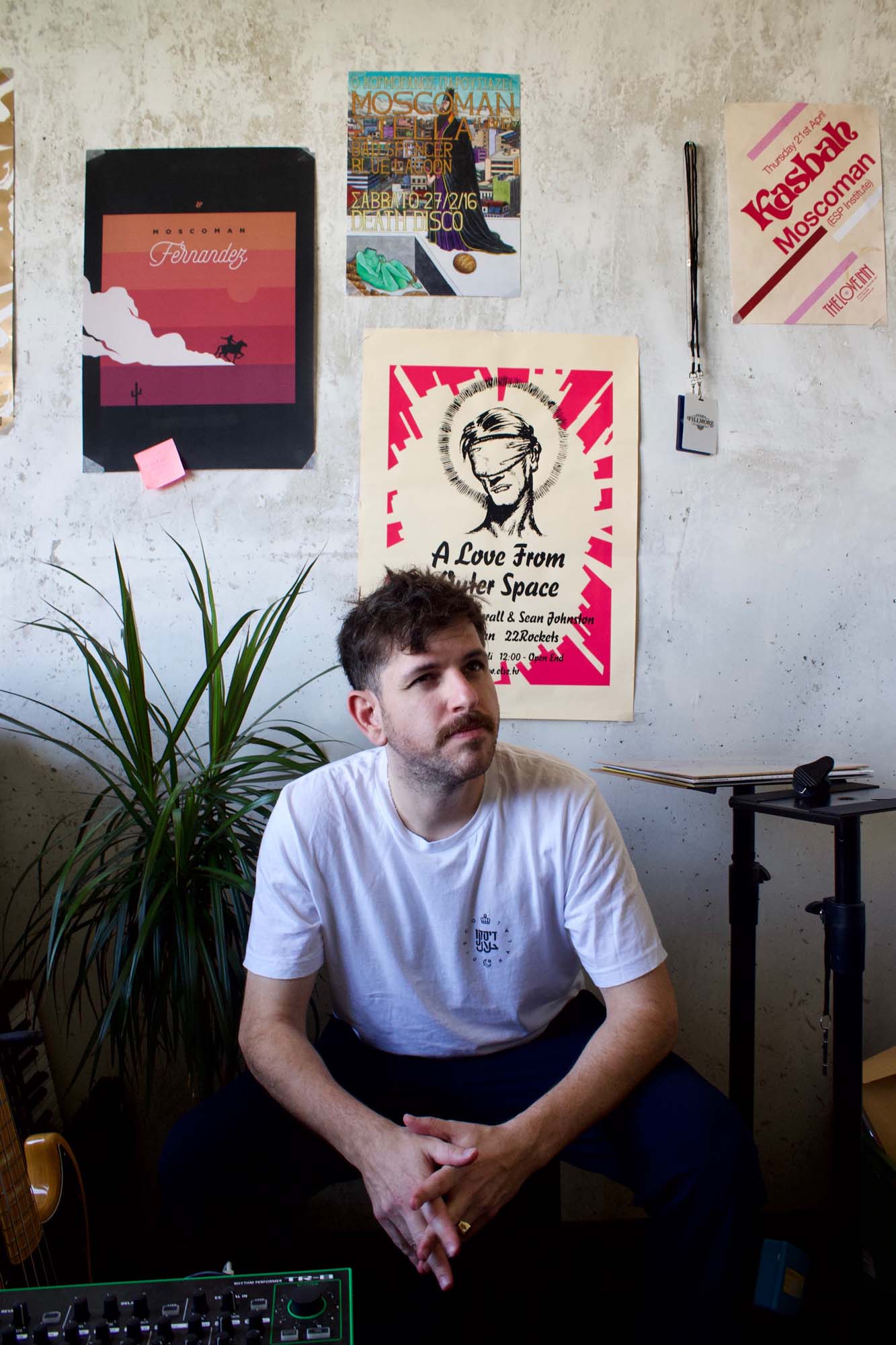 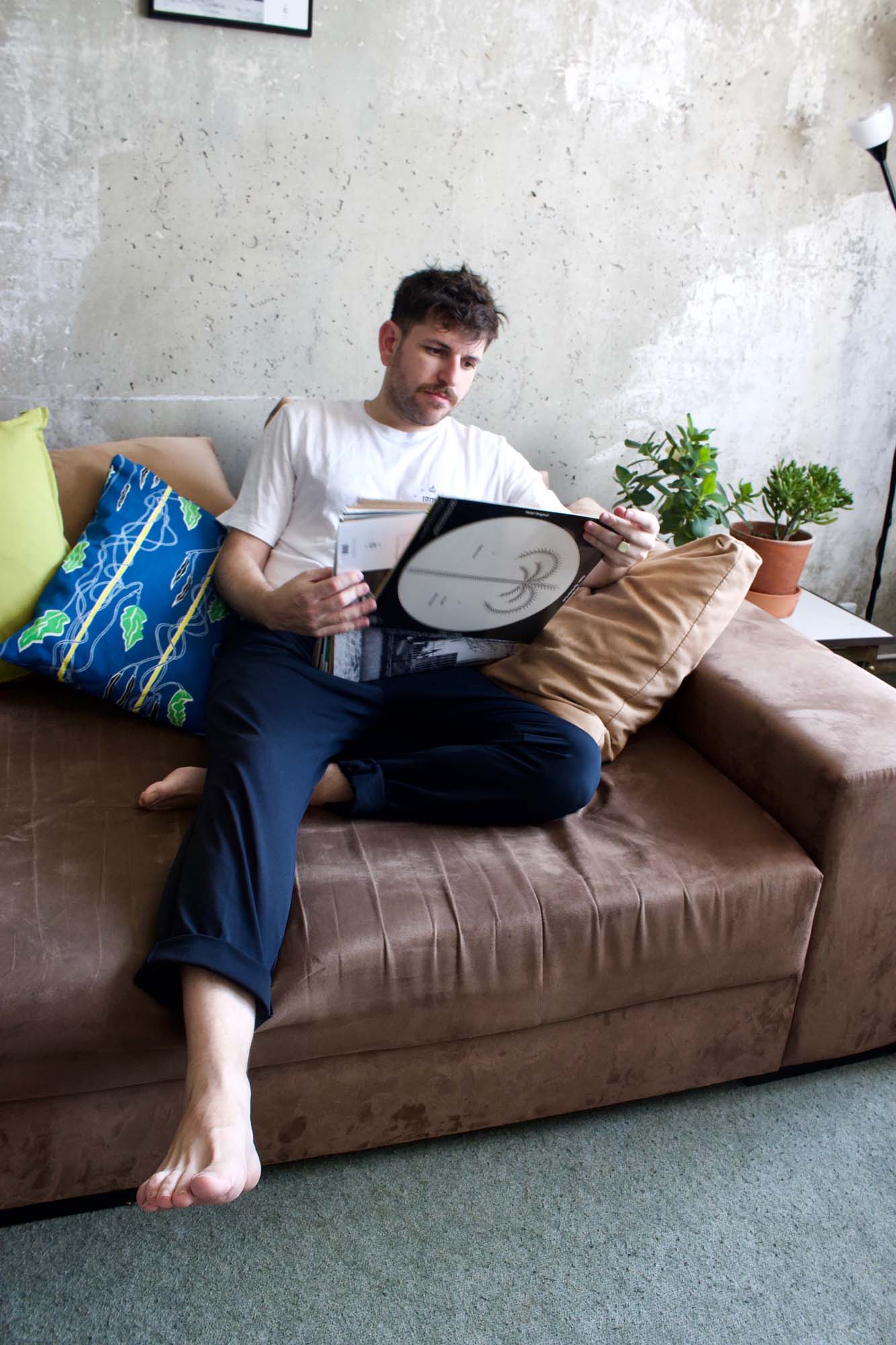 I’m not this kind of fame person, I don’t really care about that.

“Usually I go to the airport directly after the DJ set. If I’m flying back on Sunday I prefer to just sleep when I get here and then on Monday I’m able to wake early, because during the week I need to work on Disco Halal. I’m able to manage because I don’t do drugs and I don’t drink while I DJ, not any more. At home we eat very healthily, mainly fruit and vegetables, and we practise yoga.”

Chen has been DJing for more than 20 years, and producing for nearly ten, but rose to international acclaim after the launch of his record label, Disco Halal, in 2015. He had moved to Berlin two years previously to be in the centre of this electronic mecca. However, things weren’t going well and he was on the verge of returning home when Oye Records in Berlin agreed to help with distribution in late 2014. “I was already one foot out the door, I had no flat, no work, no money here in Berlin, and then it started to come to me and I got a lease on this flat,” he recalls.

“The thing I’m most proud of in my life is that I didn’t break at that point, because I broke a lot of times before, that’s why I’ve only got to where I am now aged 36 and not when I was 22, because I broke the previous times. This was the first time I told myself, ‘No, I’m going to run through it.’” 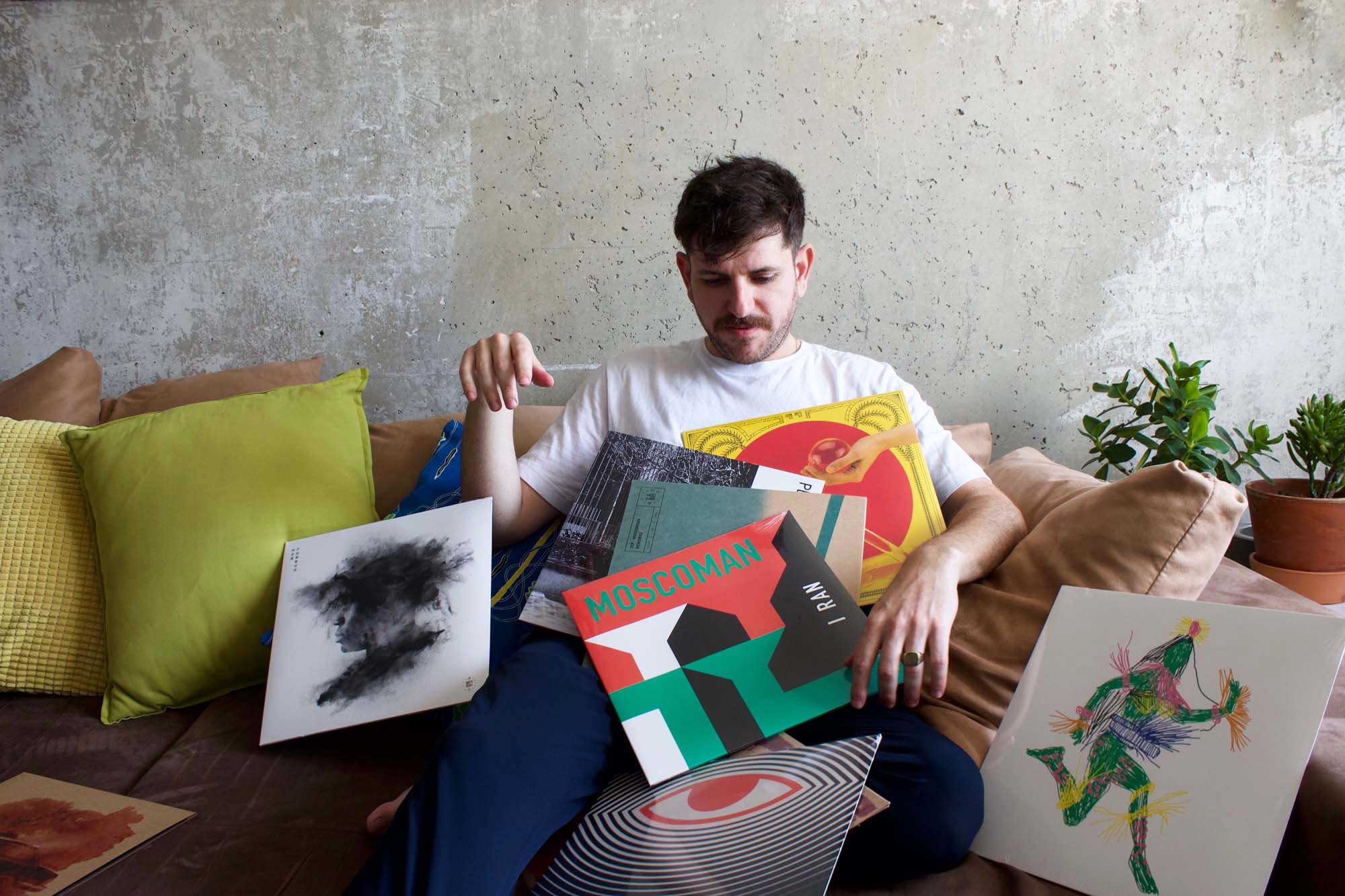 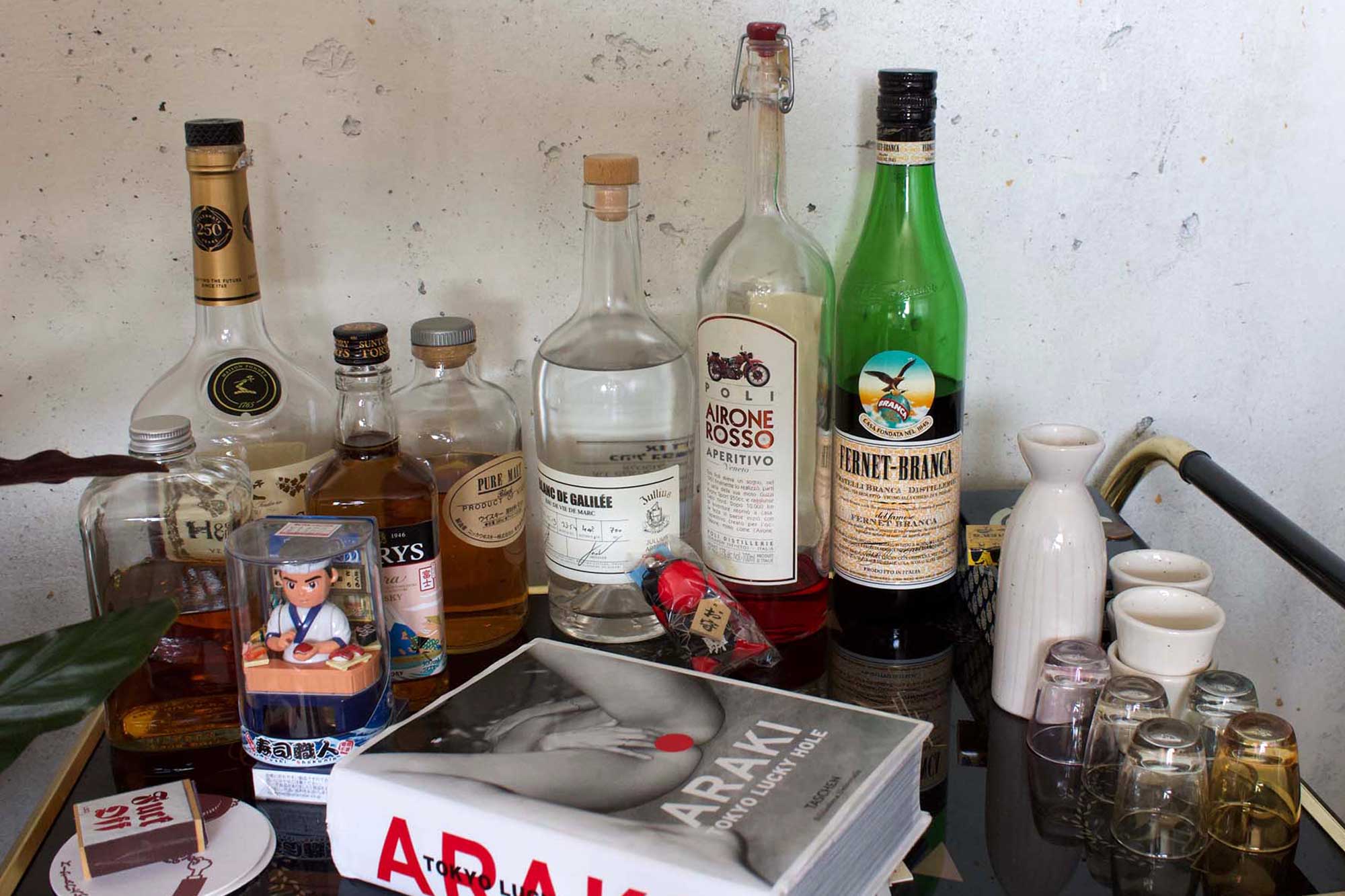 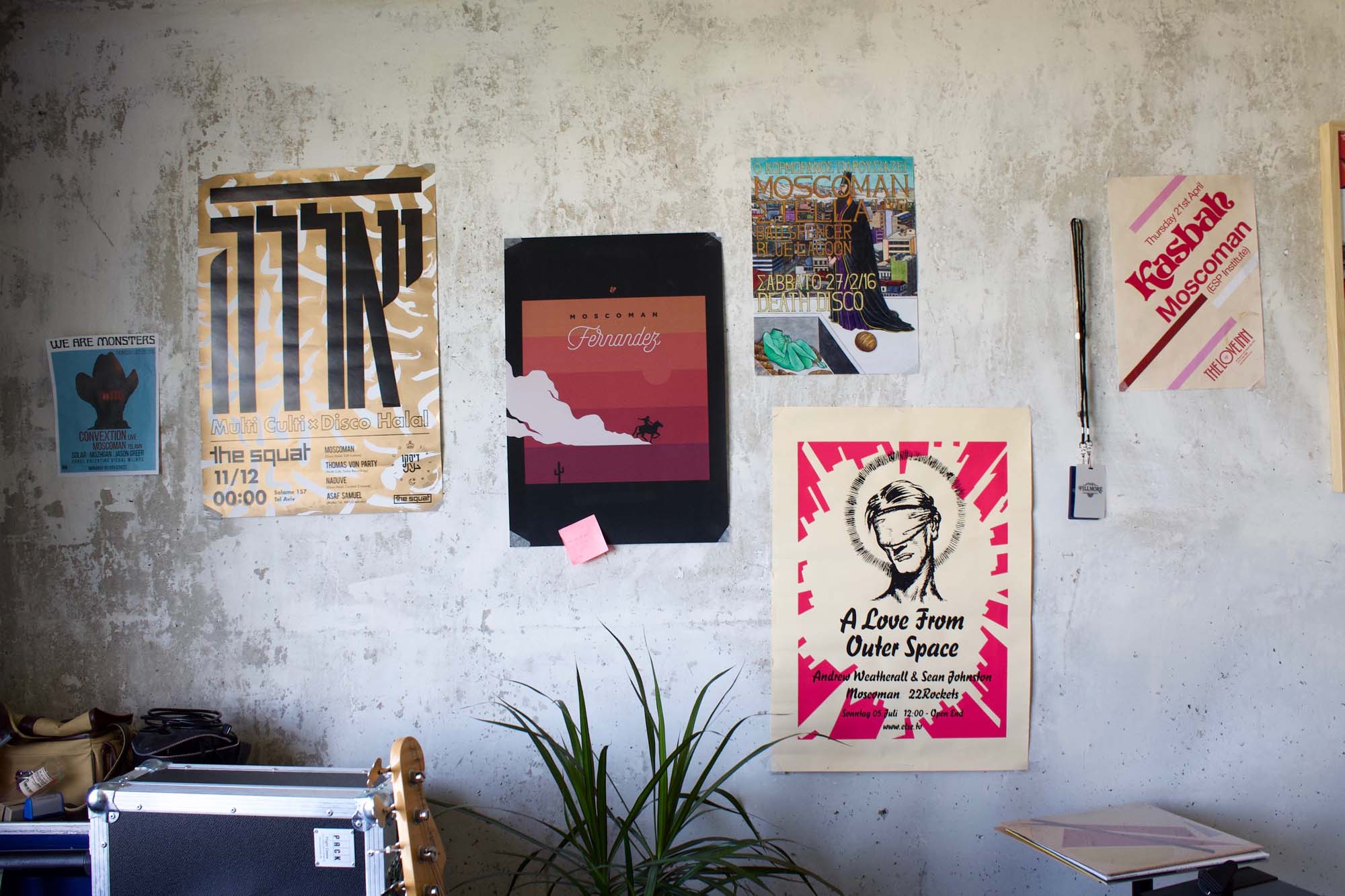 For me, success in life is waking up every morning and doing what you love every day, all the time.

Disco Halal started out as an edits label but has become synonymous with genre-transcending music from the Middle East and has launched stars such as Red Axes, Simple Symmetry and Autarkic. A series of releases that encompassed elements of downtempo, new wave and alternative pop, overladen with a skewed dancefloor throb, established Disco Halal’s unique style and drew the global spotlight to the once overlooked club scene of Tel Aviv.

Chen was already settled with his girlfriend in Berlin when he began touring internationally, and he is not interested in the party side of the industry. If anything, he’d just like to sleep more. “The more you progress in the DJ life, success means having the benefit of the most comfortable travel situation,” he says. “The guys who can fly privately can choose their schedule. Being able to have seven hours in a hotel to sleep every night? Amazing! Then you have more energy and you’re not worried about losing your sanity or getting sick.”

Although his mother gets “ecstatic” when newspapers write about him back home in Israel, he says: “I’m not this kind of fame person, I don’t really care about that. But you know, I call them ‘the normal people’, they think that fame is a sense of importance in life. For me, success in life is waking up every morning and doing what you love every day, all the time. It doesn’t matter what the outcome of it is. It’s just about creating something and believing in it, doing it for yourself and continuing to do it every day, every day. I still work on the label every day, looking for new music.”

Chen held a series of various jobs back in Israel while also DJing regularly, and says he is still grateful to be able to make a living from music. Were this not the case, he still wouldn’t have given up. “I never saw any other path for me other than music. I’m lucky to be earning a living from it, but it could have gone another way. The fact is that you shouldn’t let that stop you, I would have kept going. Even if you do need to work in some shitty job and do music on the side, it doesn’t matter, it’s just about doing what you like. The only thing that can stop you is yourself. If I create great music or shitty music, if I have a good gig or bad gig, the only one who can judge me is me.” 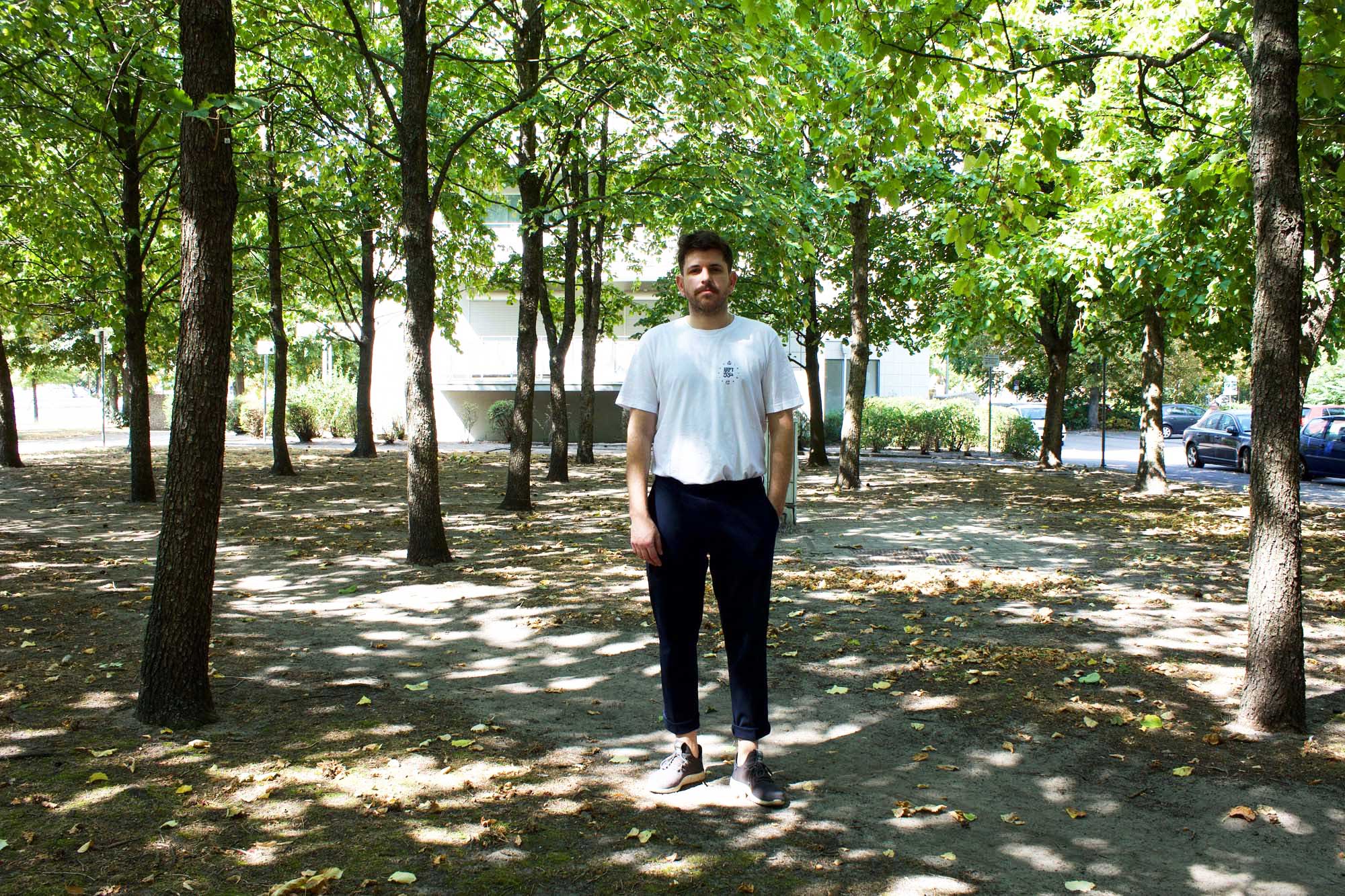 As well as musical explorations on his own Disco Halal label, Chen has served up everything from raw and rugged machine disco to melodic techno via wonky house on Diynamic, Eskimo Recordings and I’m A Cliché. For his new release, he has joined DJ Tennis’s forward-reaching label, Life and Death. The four-track Wave Rave EP showcases his club-ready yet esoteric approach to perfection. The eponymous lead track is a nod to early trance but with Chen’s distinctive, left-field style. With soaring synth riffs that range from upbeat to melancholic, paired with 808-esque drums that pop out of the speakers, it is sure to fire up this summer’s festival crowds.

Chen’s debut album, A Shot In the Dark, came out on ESP Institute in 2016, and he has a follow-up in the works. “It’s almost ready, I still don’t know the details of how I’ll release it, whether on my label or someone else’s, or exactly which tracks to include.” In 2017 Chen launched a second label, Treisar, which means 12 in Hebrew and was intended to be the platform for him to release 12 EPs.

The series stopped after the ninth EP in October that year but Chen says he hasn’t forgotten about it. “The other three releases are ready, we just didn’t make it on time and then we released the I Ran EP on Disco Halal in March 2018. The other three will come out, it’s just about getting them pressed. I know, it weighs on me, I do want to finish them,” he says with a sigh. 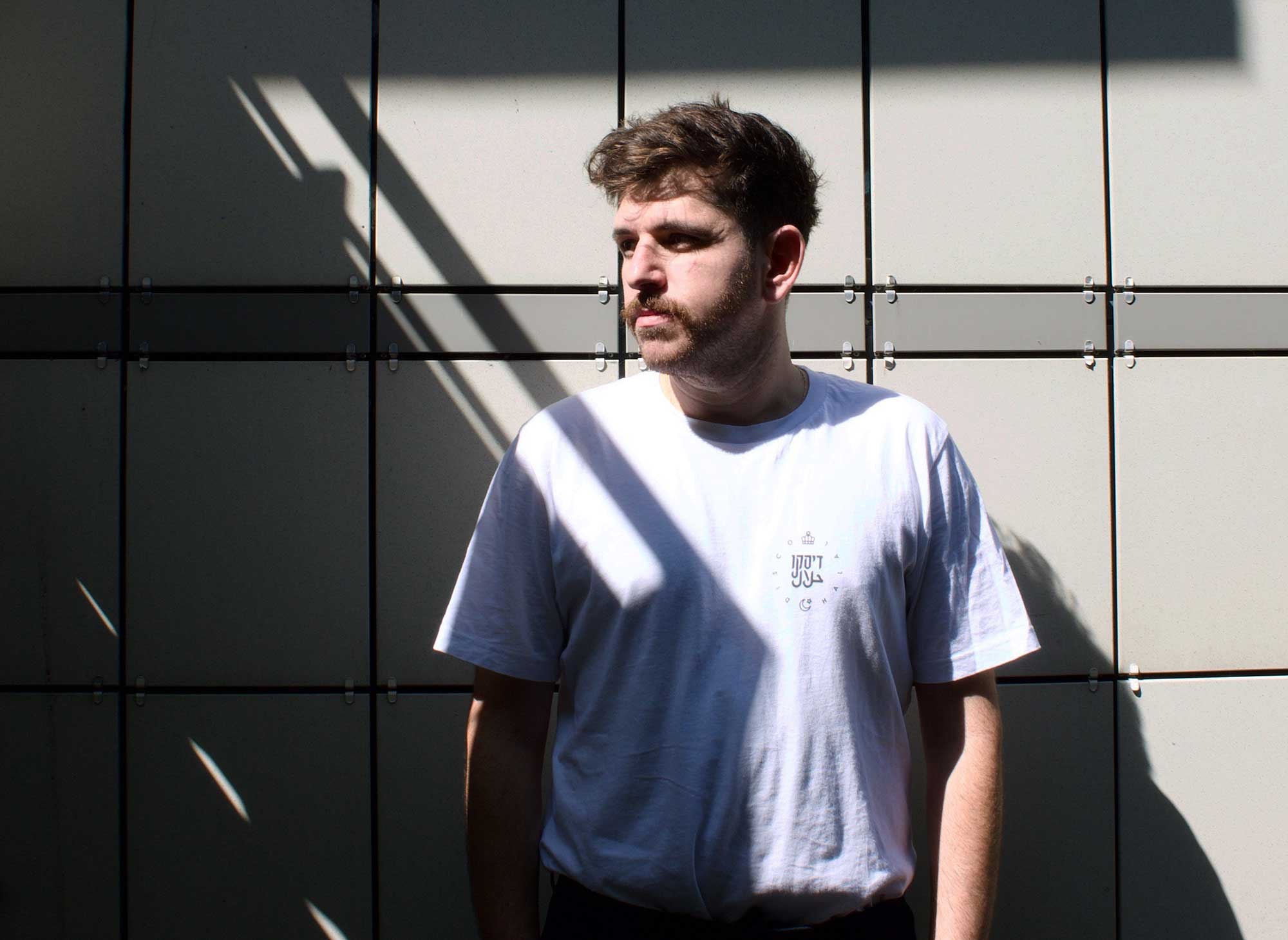 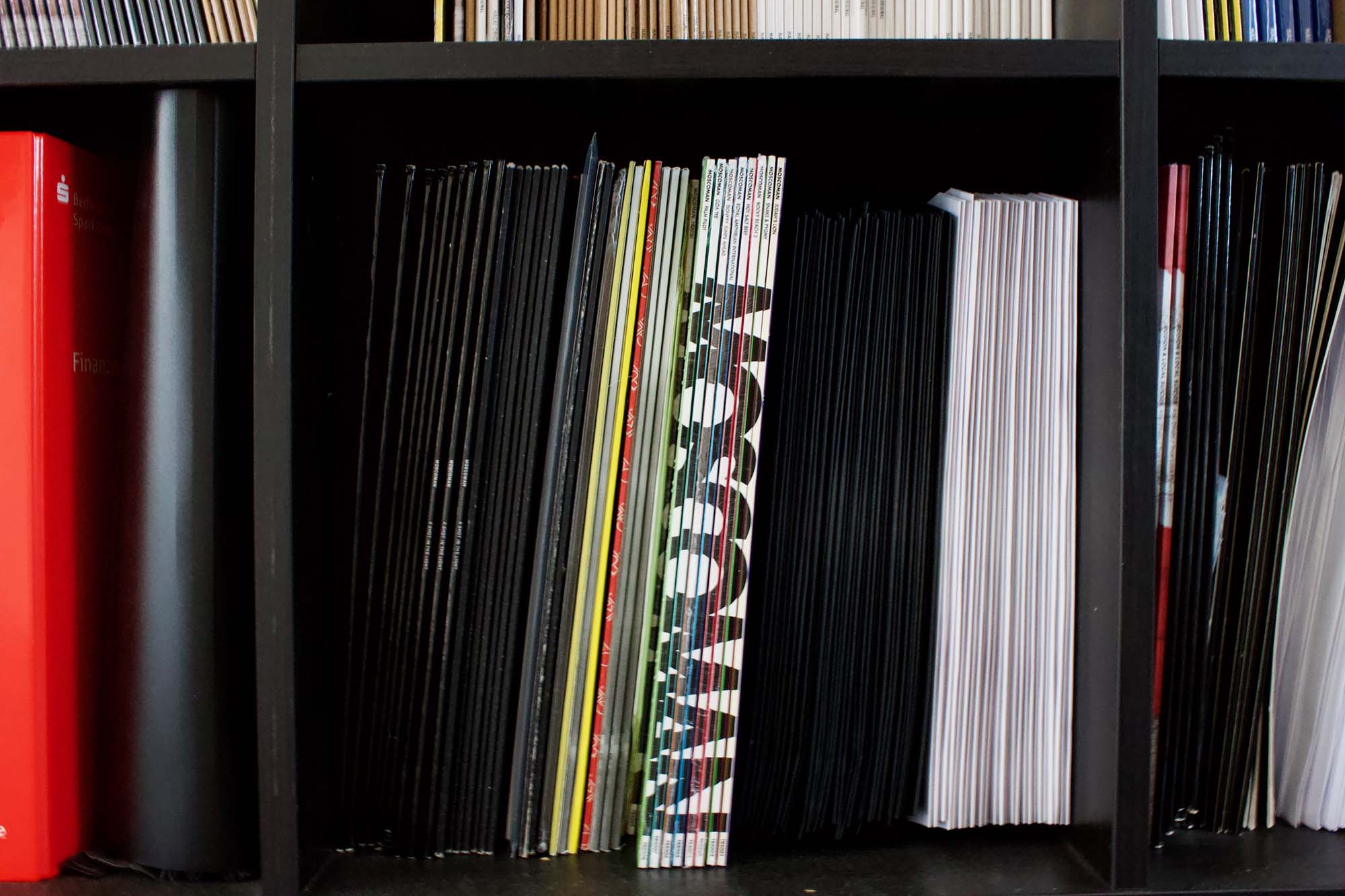 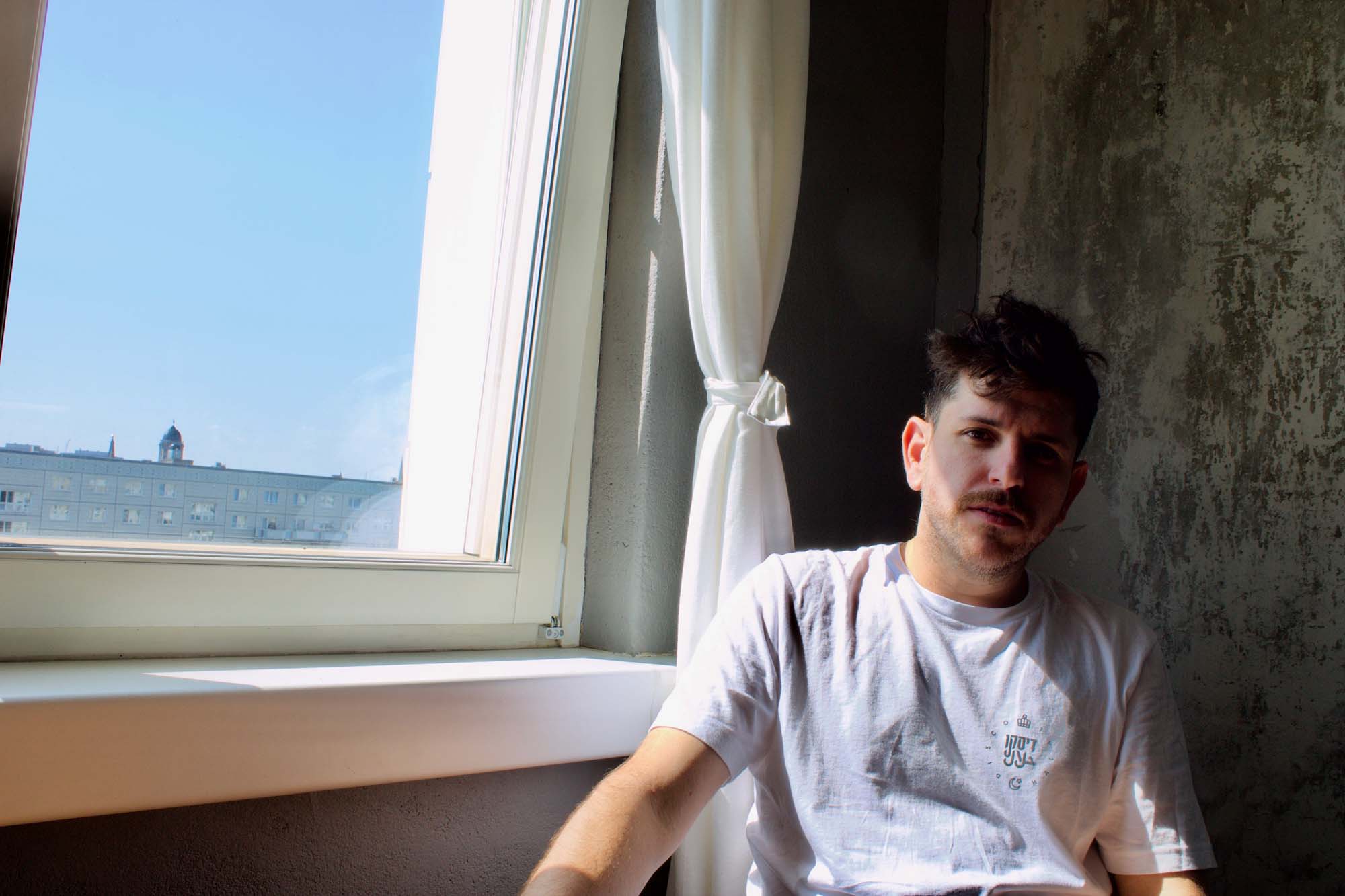 I thrive better on failure than success as it keeps me on my toes and I don’t get bored.

As for the future of Treisar, he doesn’t know if any other artist would want to take on the mammoth task of releasing 12 EPs in a row. “I don’t know what the future of the label will be, it’s a nice name though,” he muses. “If somebody else wants to do 12 records I would back it up but I’m not sure anybody wants to do that; it’s artistic suicide releasing so much music!” What was the ethos behind the releases? “I have no idea!” he laughs, shaking his head. “I guess it was stupid. Maybe I was over-reaching my ability. Look, it was great music, it just wasn’t a commercial success. I don’t look for commercial success in whatever I do, that’s just a byproduct.”

He warms to the theme. “I thrive better on failure than success as it keeps me on my toes and I don’t get bored. Failing is 100% part of whatever you are as a person, because there’s never a guarantee of anything except failing. Struggle is happening all the time. Even the biggest DJs who are adored, they always need to keep working. Now the mantra I tell myself is you only have to be right once; you can be wrong all the rest of the time, it doesn’t matter, just keep trying.

“My biggest goal is just to stay relevant in everything in life. If I can stay relevant, it means that I’m on my toes and I’m working hard. If I get tired then that’s it, I won’t be relevant any more.”

Keep track of Moscoman’s forthcoming DJ gigs on Facebook and listen to his sets and releases on Soundcloud.