The Northern Ireland Music Prize is a beacon of hope 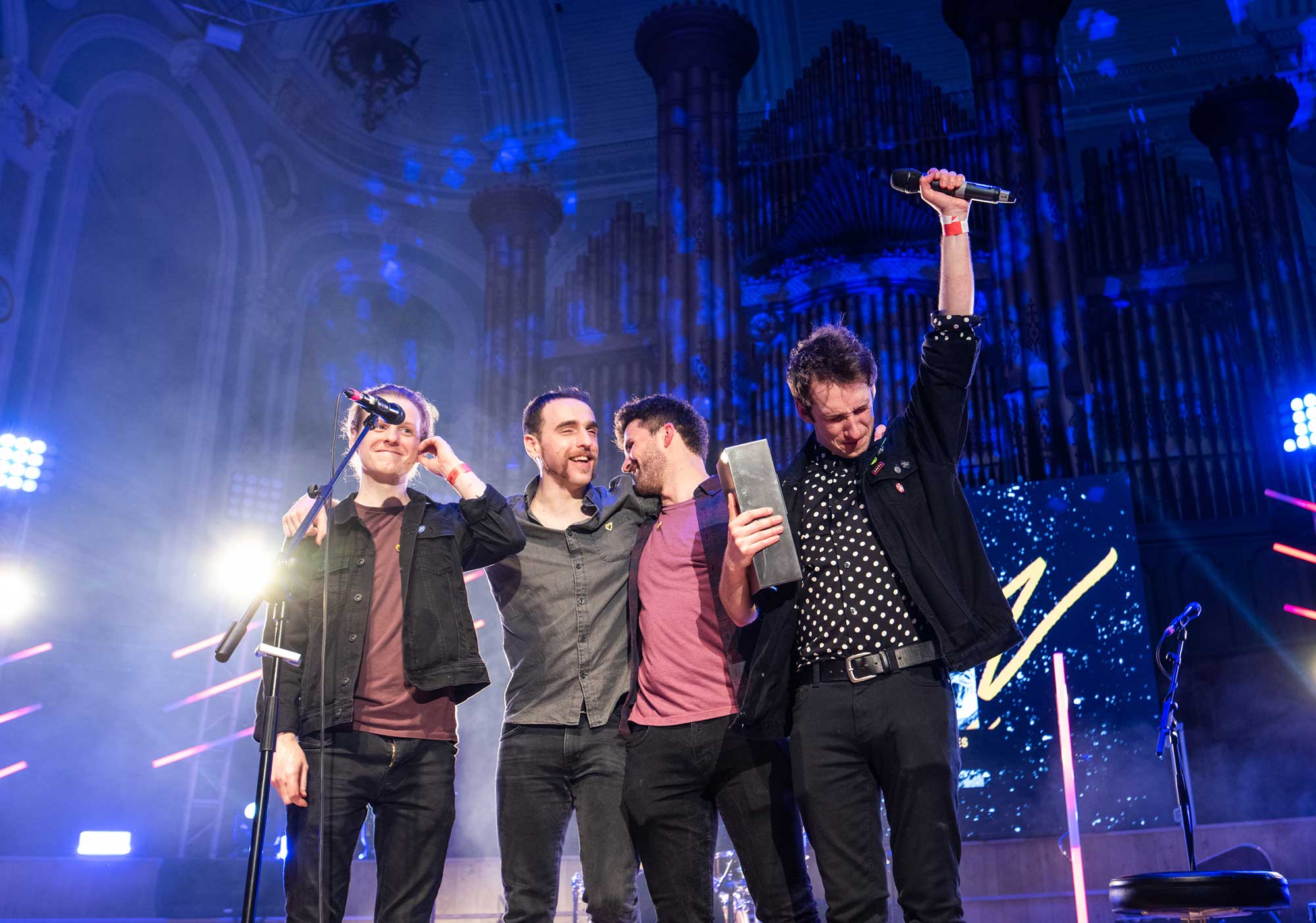 This was the fifth year of the Northern Ireland Music Prize, an album of the year award in the same vein as the UK’s Mercury Prize or Ireland’s Choice Music Prize. In NI, this prize and the occasion carry an extra weight and a deeper meaning for the audience and the artists. Against a backdrop of a mental health epidemic and two years without a government, this kind of celebration and recognition is vital.

For the past four years, the NI Music Prize was just one award, voted for by a large pool of music industry stakeholders such as promoters, journalists, label owners and more. This year the program was expanded and three new awards were introduced: Best Single, Best Live Act, and The Oh Yeah Contender Award.

The awards have expanded physically as well, moving from the recently-closed Mandela Hall to the resplendent Ulster Hall. The Ulster Hall’s huge stage, giant organ and ornate decor bestow the proceedings with an instant sense of occasion and prestige. It’s clear that the artists feel it too. Multiple times throughout the night, performers will comment on how they always dreamed of playing the Ulster Hall, and how much it means to them. This isn’t hyperbole or lip service – any young musician from Northern Ireland will have fantasised about treading on those fabled wooden boards, following in the footsteps of behemoths like Led Zeppelin, The Strokes, AC/DC and Metallica. Normally to play the Ulster Hall you need to be orbiting the upper echelons of success or get lucky with a support slot to a major artist, so it’s a tremendous moment for artists, some as young as 19, to be taking to the stage. 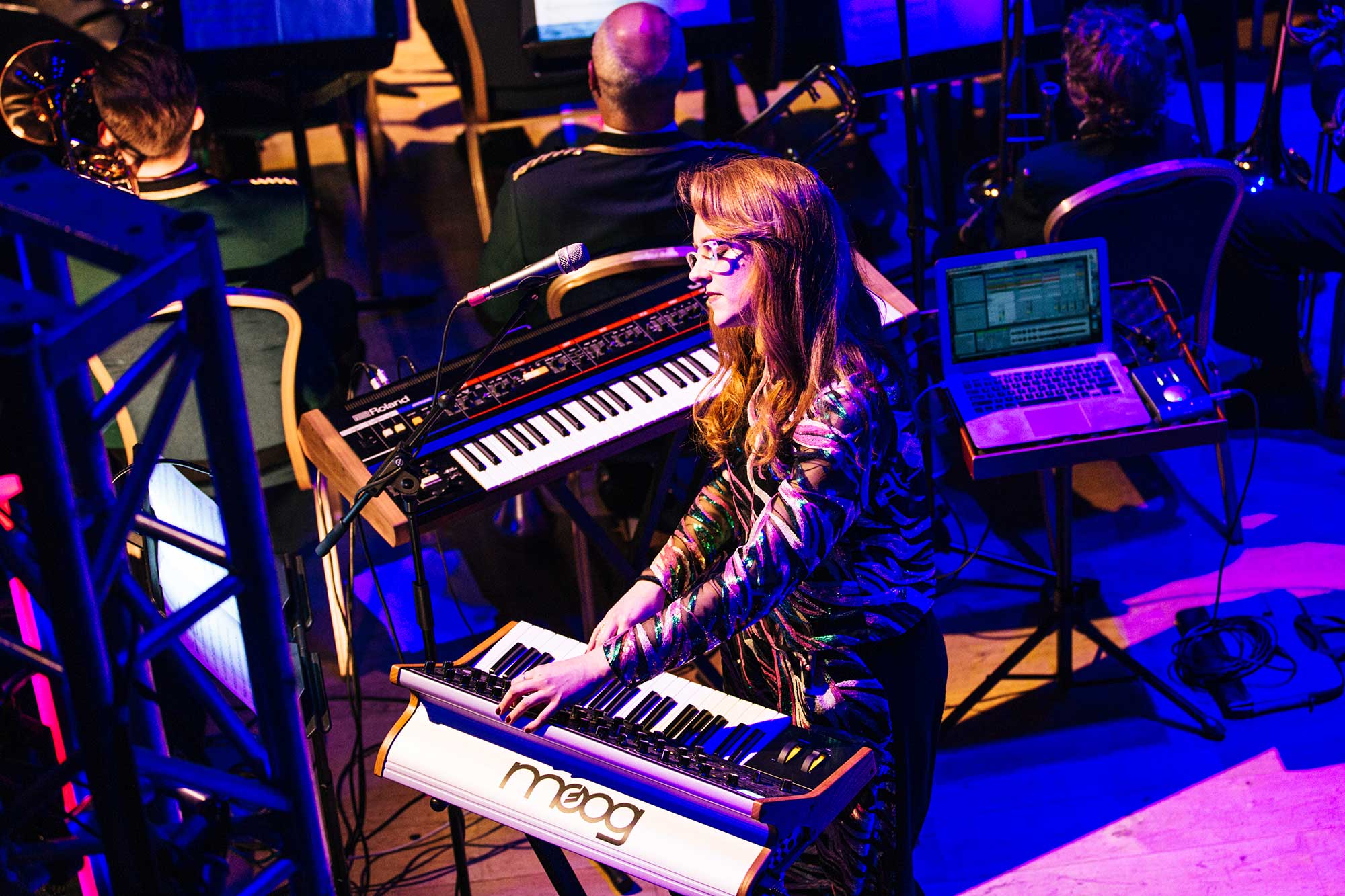 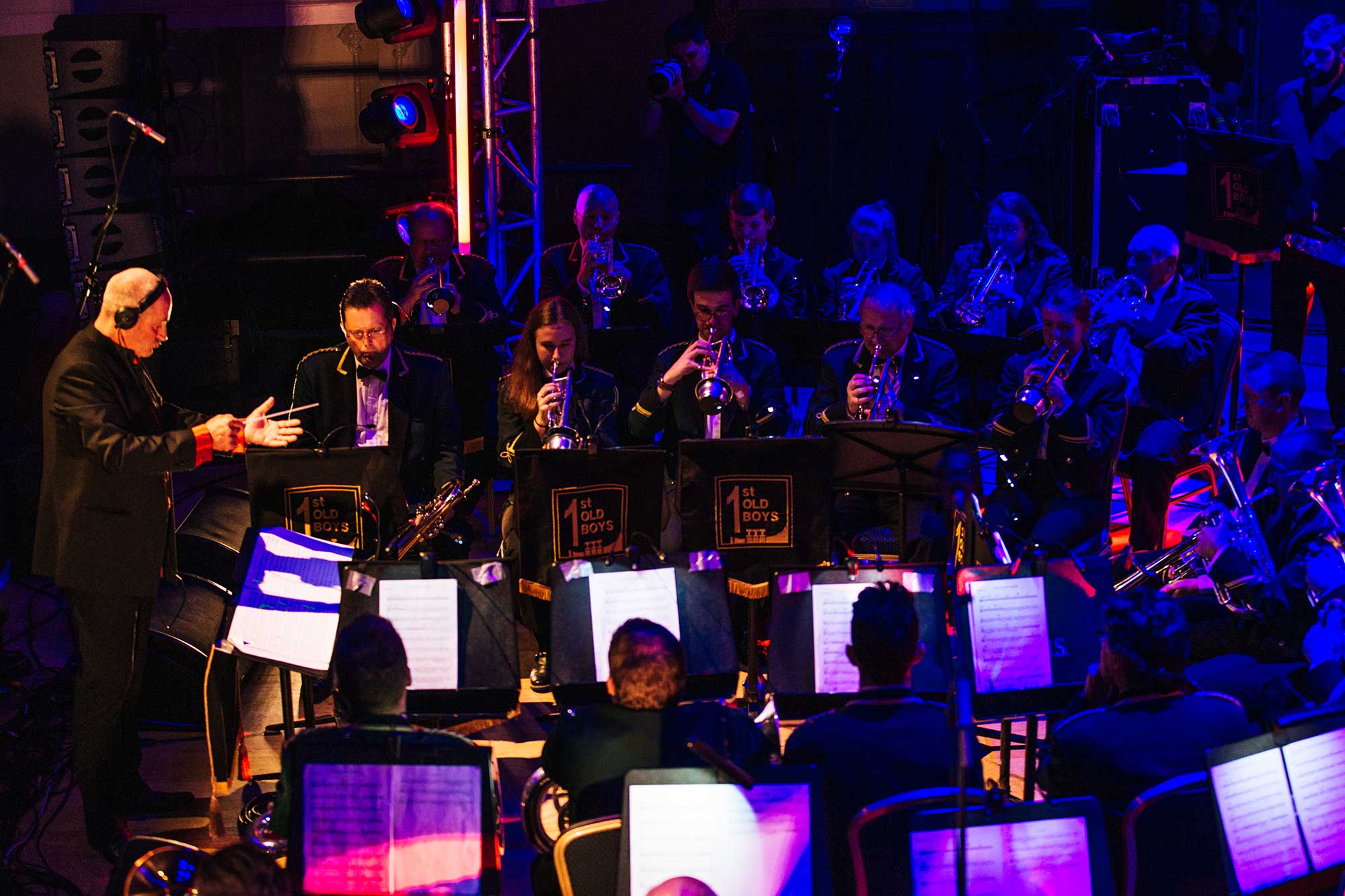 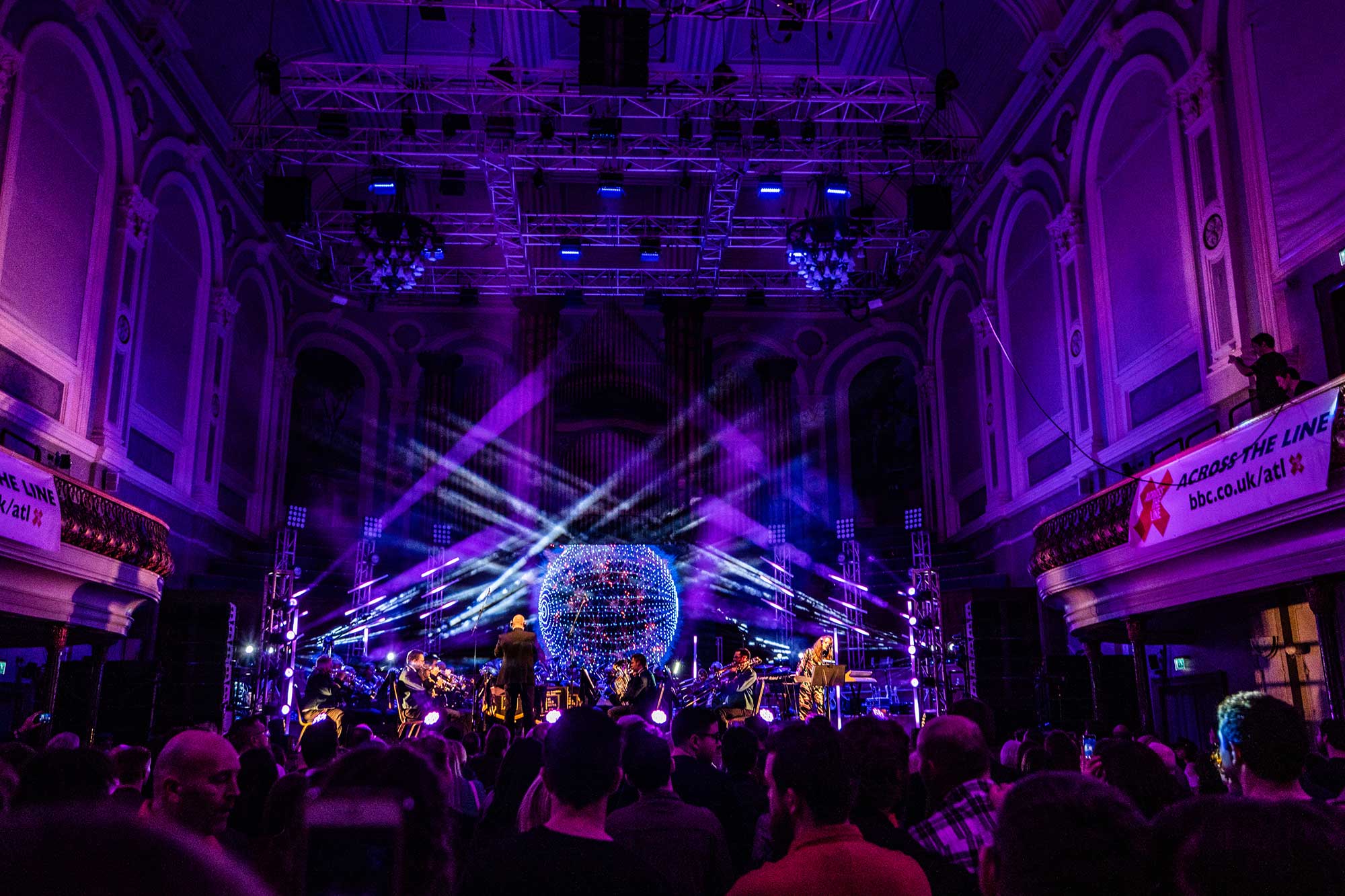 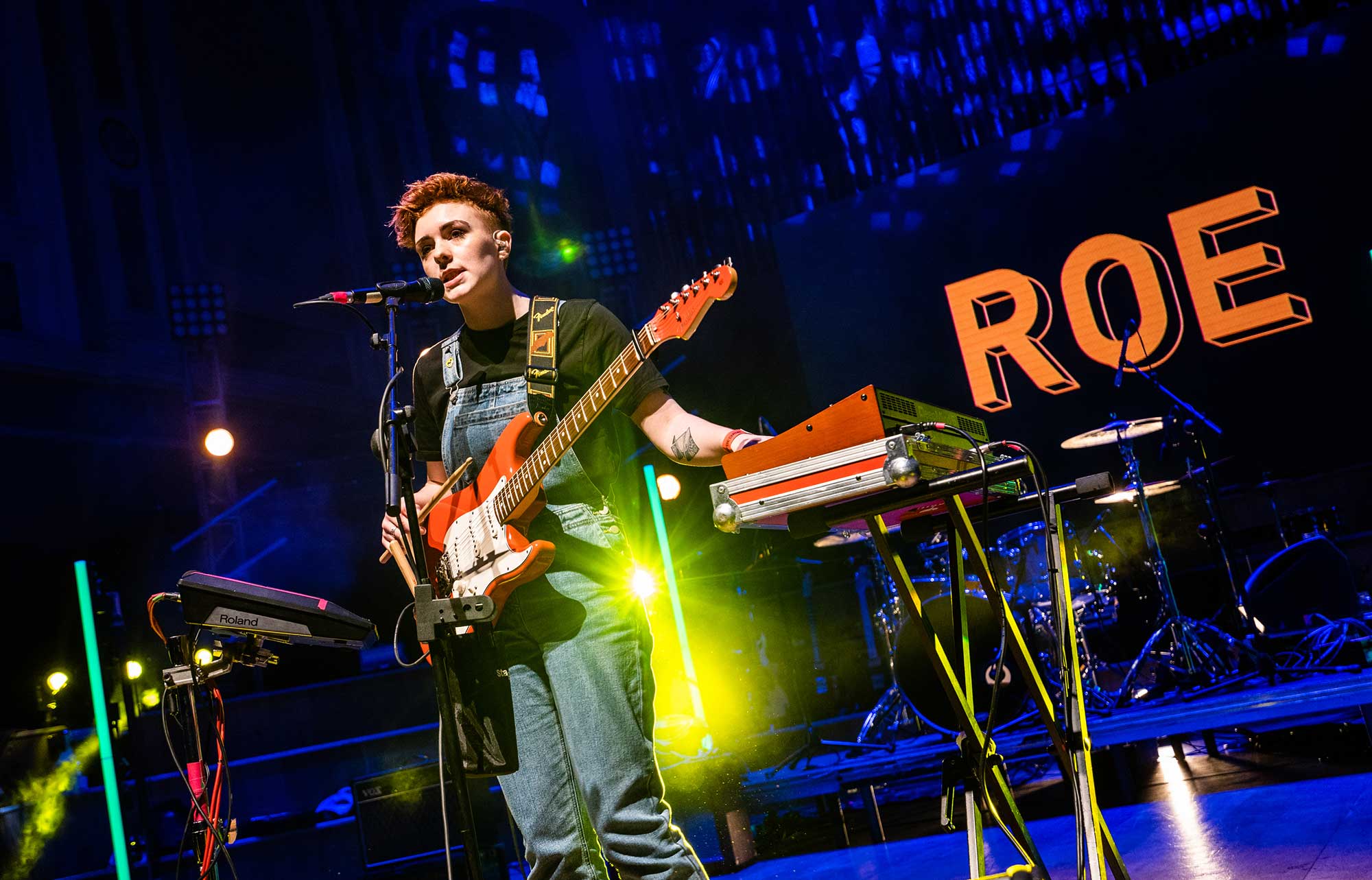 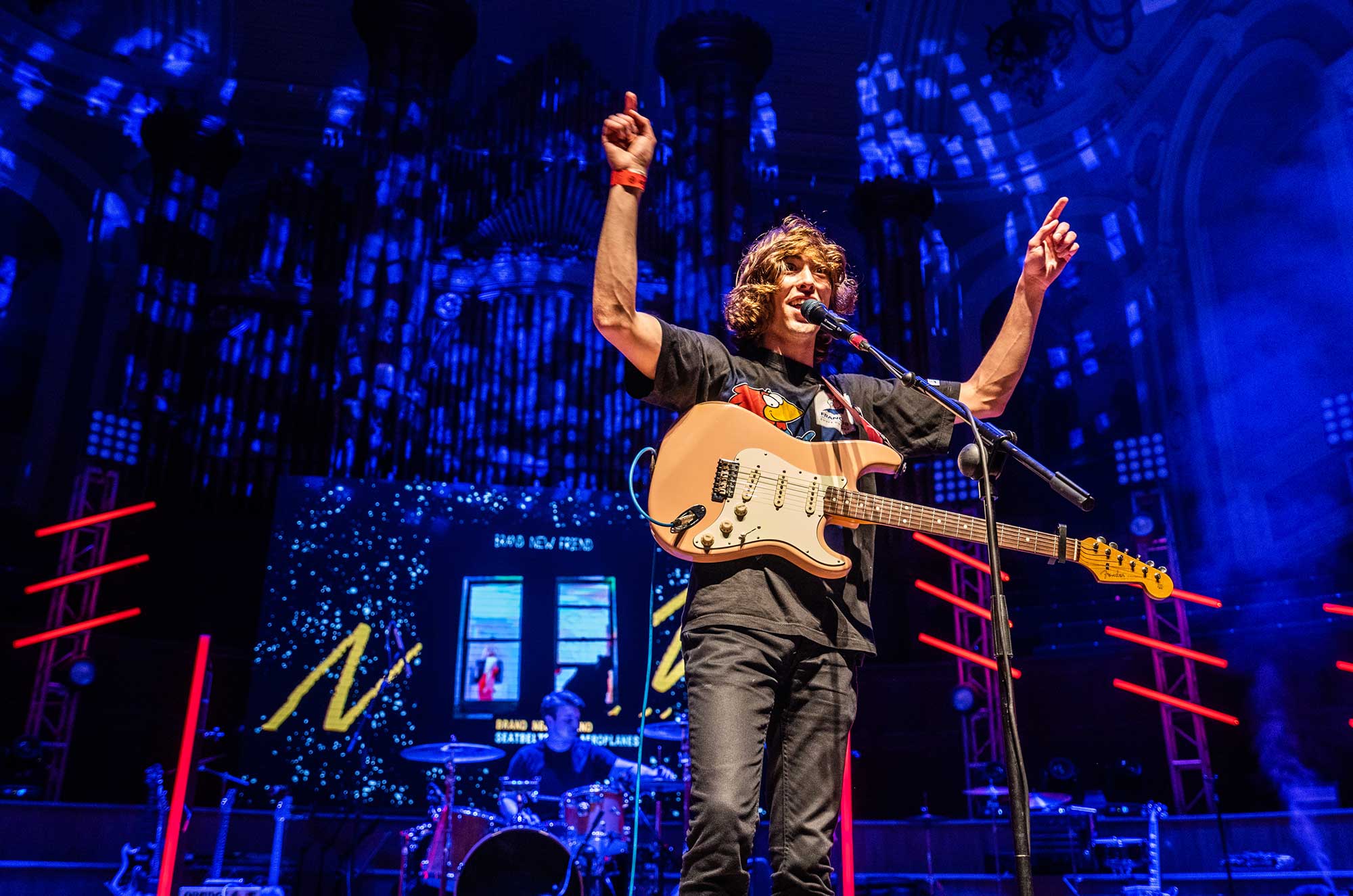 The bar for performances is set high right from the get-go. Opening act Hannah Peel is accompanied on stage by the 1st Old Boys Silver Band for an extrasensory experience combining ethereal synths and vocals with live visuals.

In contrast to the 30-plus people on stage for Hannah Peel’s performance, the solo figure of Derry native Roe could seem sparse. It mayt be just her and her electric guitar, but she fills the space and hall with her presence and voice. She may be incredibly young, but Roe is in no way overwhelmed by the moment. Roe presents a captivating performance, and judging by the reaction of the crowd, she’s already amassing a fervent and vocal fanbase. A veritable star in the making.

From one display of youthful exuberance to another, Brand New Friend have an enthusiasm level that is through the roof, and they clearly love what they do. It’s emo pop rock of the highest calibre, and they cut a nice line in between song banter, with frontman Taylor quipping, “I had a Nando’s with Gary Lightbody and Tom Robinson. This is the best day of my life.”

The Wood Burning Savages give a blistering and visceral performance, and while I’m not sure if they are directly influenced by The Clash, their on-stage posture and the way they are willing to make themselves political is reminiscent of the punk rock legends. 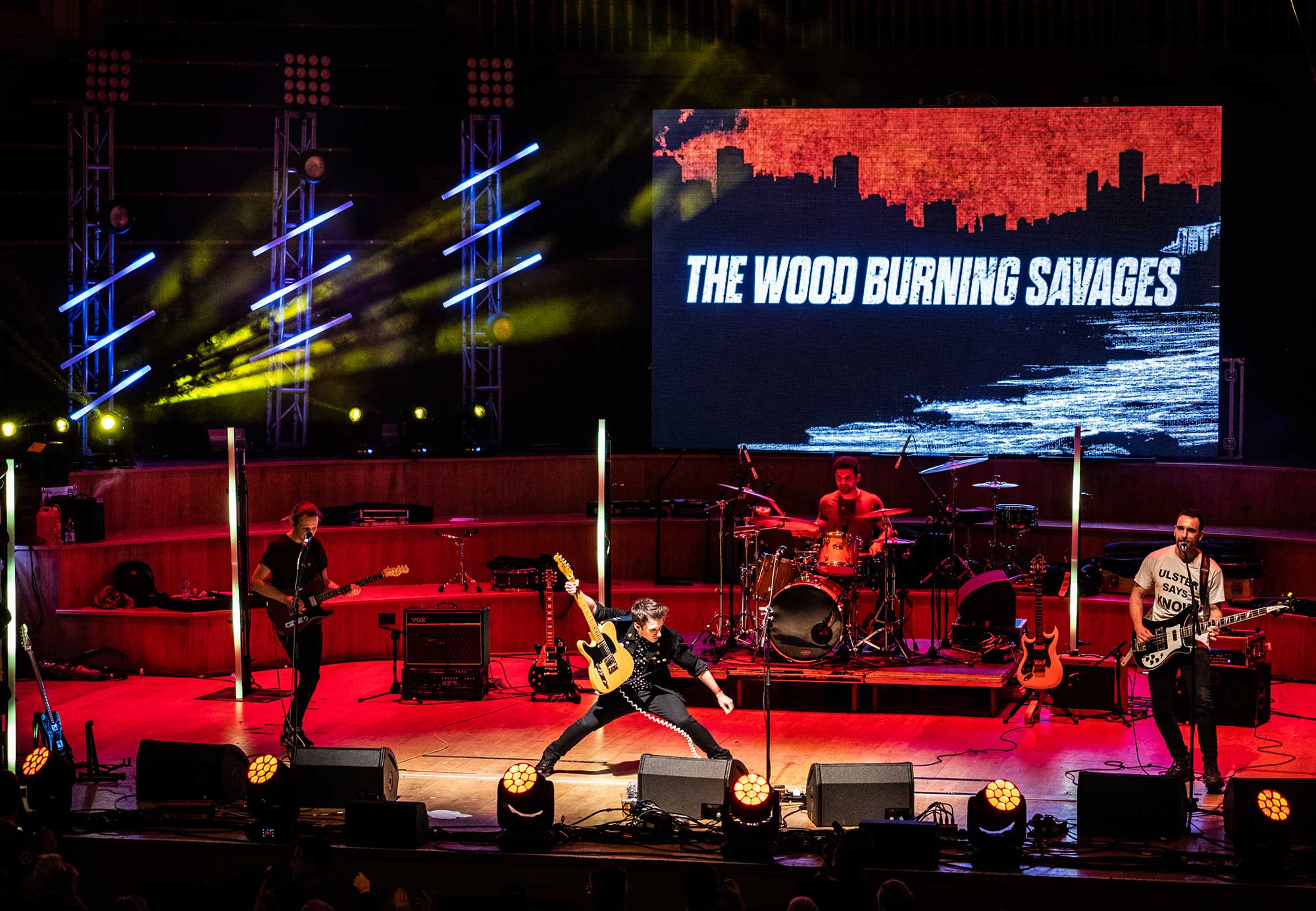 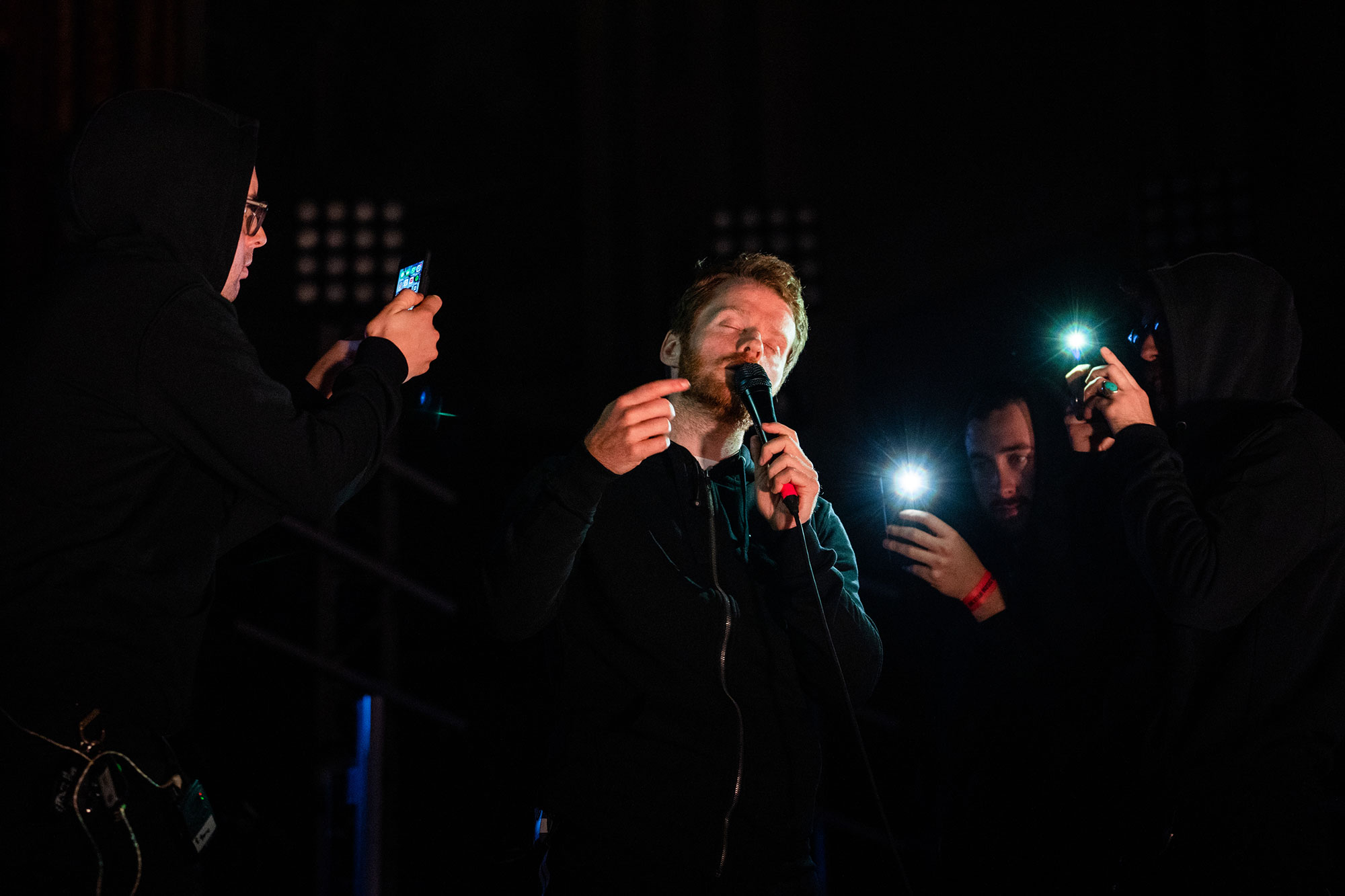 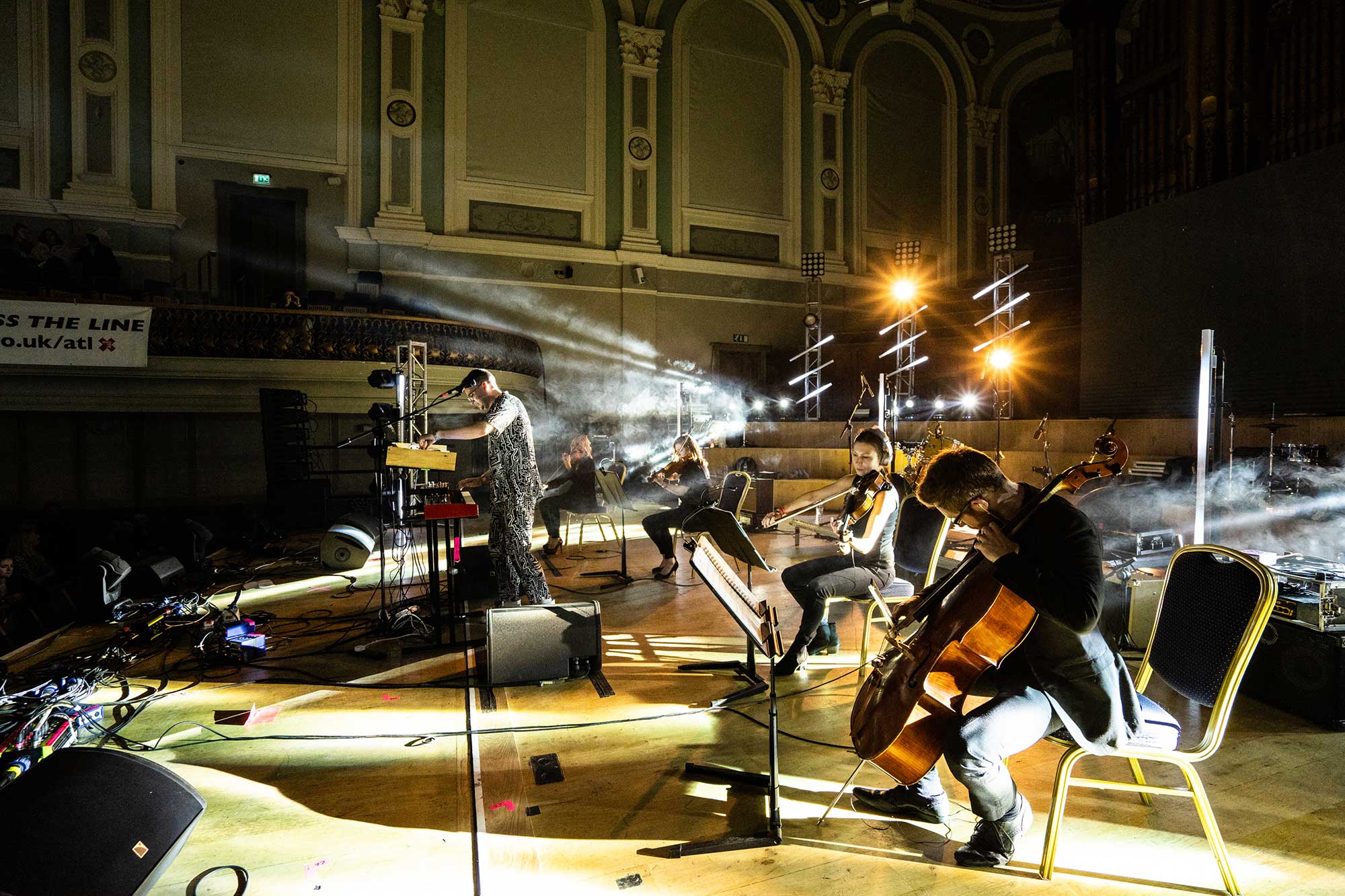 The last two live performers on the night are Ryan Vail, who is joined on stage by the Arco string quartet, and Ciaran Lavery. Ryan Vail is now a seasoned performer, and his lighting design is top notch. His latest album Distorted Shadows is perhaps his darkest yet, taking him into harder more techno-oriented territory. It’s the perfect evolution for his sound, and he is consistently one of Ireland’s most engaging electronic artists. 2016 Music Prize Winner Ciaran Lavery closes the show with a set that was as much performance art as it was a display of musicianship, a commentary on the dominance of social media in our lives, and how it blurs the lines with artistry.

Between each of these performances the awards are presented and accepted, and it’s during these moments that the real value of the ceremony is revealed. The platform is used by the artists to highlight issues that matter and that affect people’s lives. When accepting the award for Best Live Act, frontman Paul Connolly gives an impassioned speech. He is the first to shine a light on mental health issues, telling everyone to look out for each other, to make sure your mates are OK, and extolling the virtues of even going for a simple cup of tea with your friends.

It’s solid advice and the start of a thread that runs through the whole evening, and is one that is vitally important. Suicide is unfortunately on the rise in NI – it is the only part of the UK that is experiencing an increase in suicide rates, and men aged between 25 and 29 are most at risk. More people have died from suicide during the time since the Good Friday Agreement was signed than died during the Troubles. When Kitt Philippa accepted the award for Best Single (for the incredible ‘Human’), they made it clear how valuable the support they have received during their career has been, and how they had been through some hard times. It’s clear how much the moment meant to them.

Roe won the Oh Yeah Contender award, and she also referenced mental health during her set, giving a shout out to “anyone who has ever had a bad day” and wanting everyone to know that it’s OK to not feel good sometimes. It’s both heartwarming and heartbreaking that someone so young can be so acutely aware of the importance of mental health and of sharing and being open about your state of mind, and then Gary Lightbody took this raw openness to a special place.

The Snow Patrol frontman was presented with an Outstanding Contribution to Music Award by Mike Edgar. Before Gary collected his award, a video was screened featuring a host of Gary’s family, friends and people he has worked with, giving him credit where it is due. Gary really has made an outstanding contribution to NI music. As well as taking Snow Patrol to the greatest heights of success and showing that you can hail from Northern Ireland and still conquer the world, making them a role model for hard work and success regardless of whether you are a fan of their music, Gary has given prestigious support slots to countless NI bands, putting them on stage in front of thousands of people. He was one of the founders and driving forces behind the Oh Yeah Music Centre, providing a dedicated physical space for NI music, funded Third Bar Artist Development, helping to support and nourish the careers of many musicians, and he uses his personal platforms to promote NI music in any way he can. In the weeks preceding this awards ceremony, he tweeted about every single album that was nominated for the Music Prize. He has put his money where his mouth is and done it in a way that is real and honest.

There was a huge amount of love on the screen, and a huge amount of love in the room. When Gary came to the stage to receive the award, he was visibly emotional and clearly touched. He has been open about his own struggles, and acknowledges that he has often behaved in ways which have been detrimental to his mental health. He told a story about how he had cut himself off from everyone, stopped answering any calls and shut himself away. It took his bandmates getting together, each flying from a different part of the world, turning up on his doorstep and banging on the door until he answered to reach him. He said this was the thing that pulled him out of a bad place and got him back into the world, and that without his bandmates he doesn’t know where he would be, and it was this move alone that got Snow Patrol to make music again. 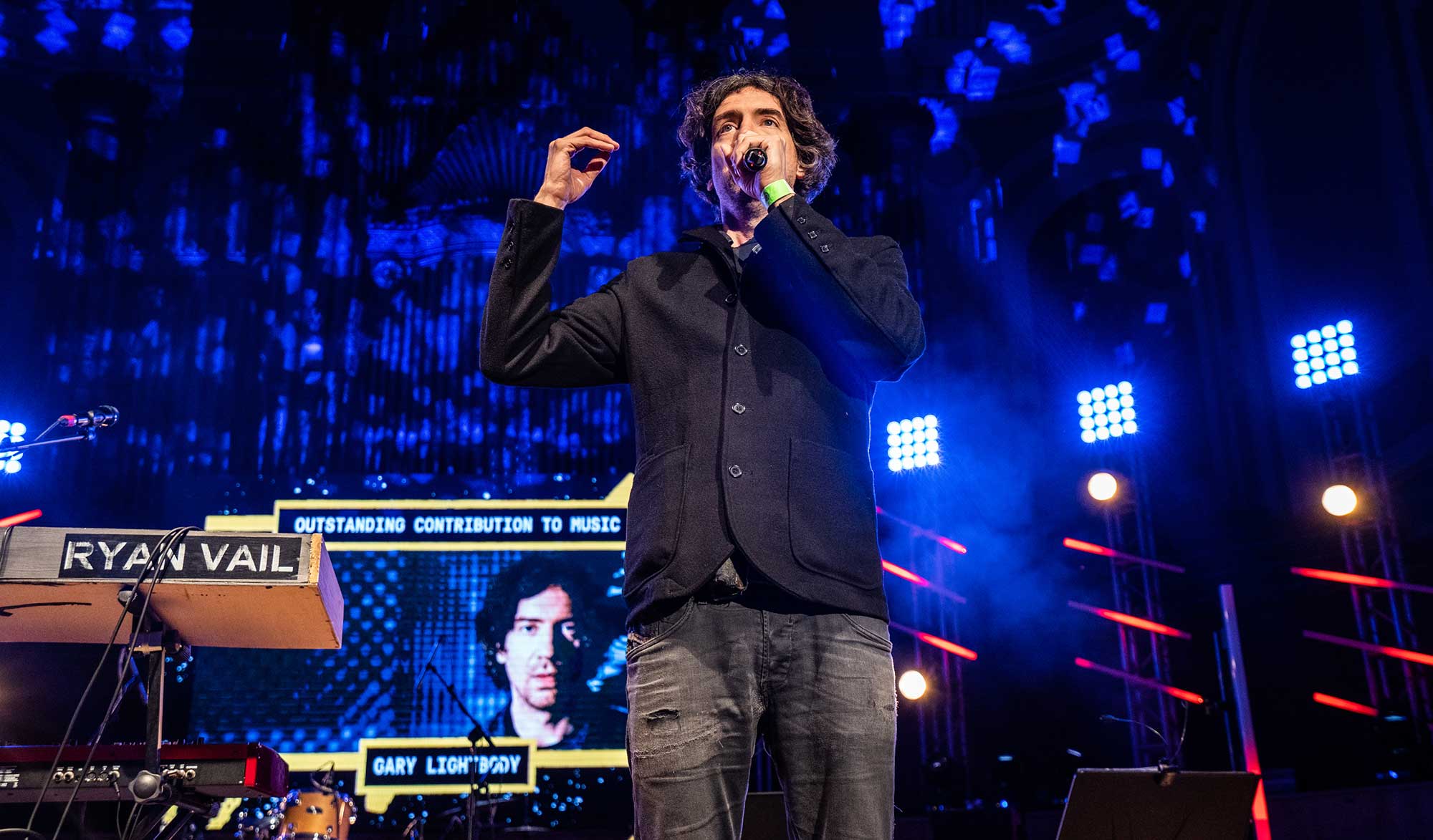 When someone achieves the incredible heights of success that Gary Lightbody has, it’s easy to think that they have it made and that their problems are no more. Health is a funny thing though, it doesn’t care how many records you have sold or how big your bank balance is. It takes courage and bravery to be as open about your struggles as Gary has been, and he should be lauded for this as much as for the material things he has done for Northern Irish music.

Before Oh Yeah Chief Executive Charlotte Dryden presented the NI Music Prize for Best Album to The Wood Burning Savages, she said there was some serious news to deliver first as to why Oh Yeah Operations Director Dee McAdams couldn’t make the ceremony. Turns out Charlotte has a flair for the dramatic, as the reason was that Dee’s wife Carrie had just given birth. It’s another display of the warm and familial atmosphere of the NI Music Scene. 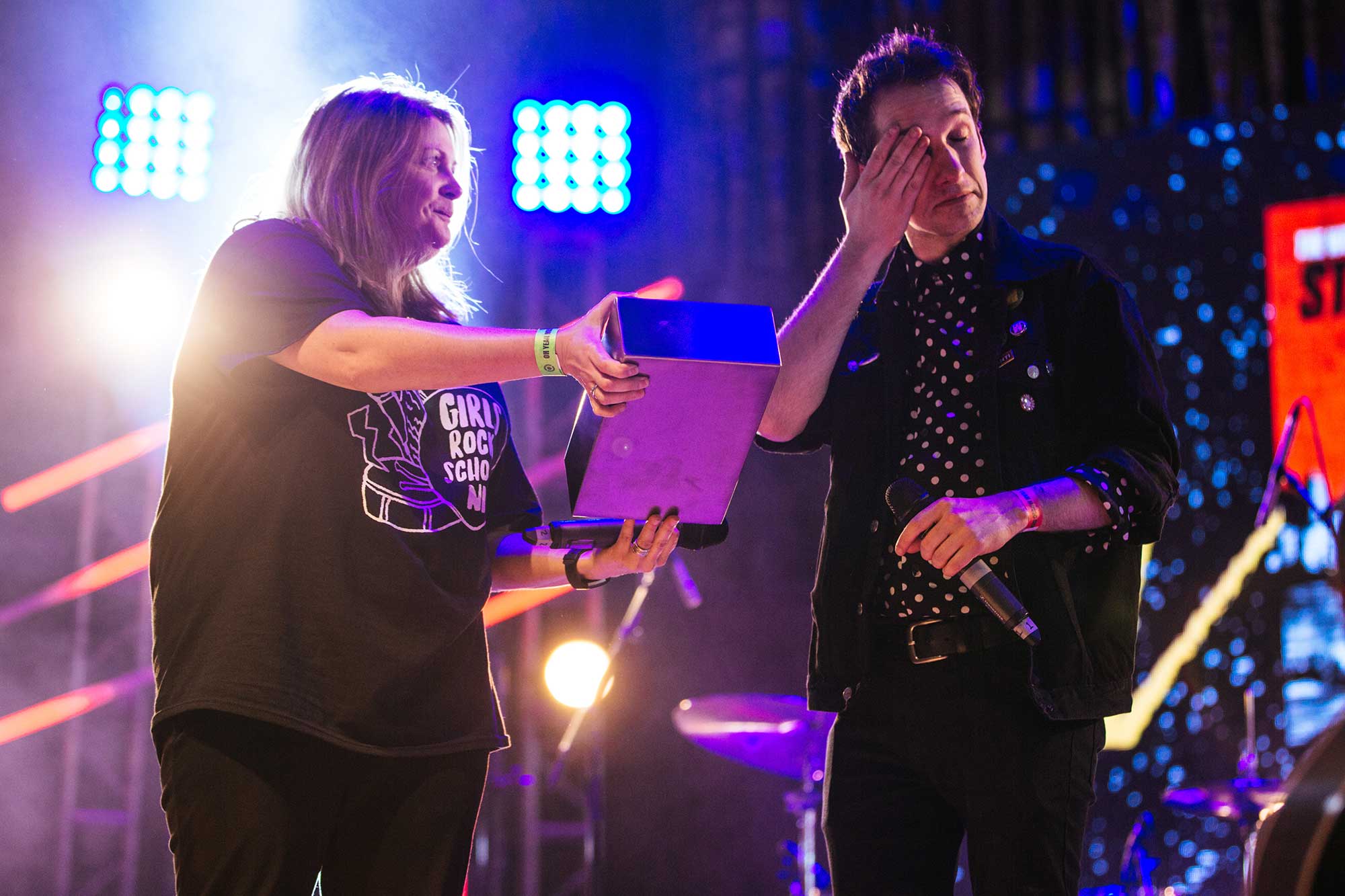 In the last speech of the night, when The Wood Burning Savages’ had just received the NI Music Prize for Best Album, Paul Connolly remarked on the lack of government in NI – the Northern Ireland Assembly collapsed in January 2017 and, at the time of this writing, still isn’t functioning. “We deserve better” is the sentiment Connolly puts forward, and it’s hard to argue with it. The arts in NI are seriously underfunded, and if there was a functioning government they should be taking note of the positive impact that music has on people’s lives and start throwing money at it, and the rest of the arts for that matter.

No government, a mental health crisis, and now the country is caught in the middle of the Brexit fiasco. Against this backdrop and all of the trauma that Northern Ireland has already experienced, it’s hard to overstate the importance of events like the NI Music Prize to provide a sense of community, esteem, togetherness, and hope.

As a final note, Connolly reiterated once more the importance of being good to each other and looking out for your friends. It’s a powerful sentiment to end on. The awards are brilliant, and recognition is great to receive, but a message that says to take care of yourselves and each other is a beacon of hope. It shows how imperative this event is for Northern Ireland, and how crucial music and culture are to the country.