Introducing an ever-changing musical outfit from half a world away 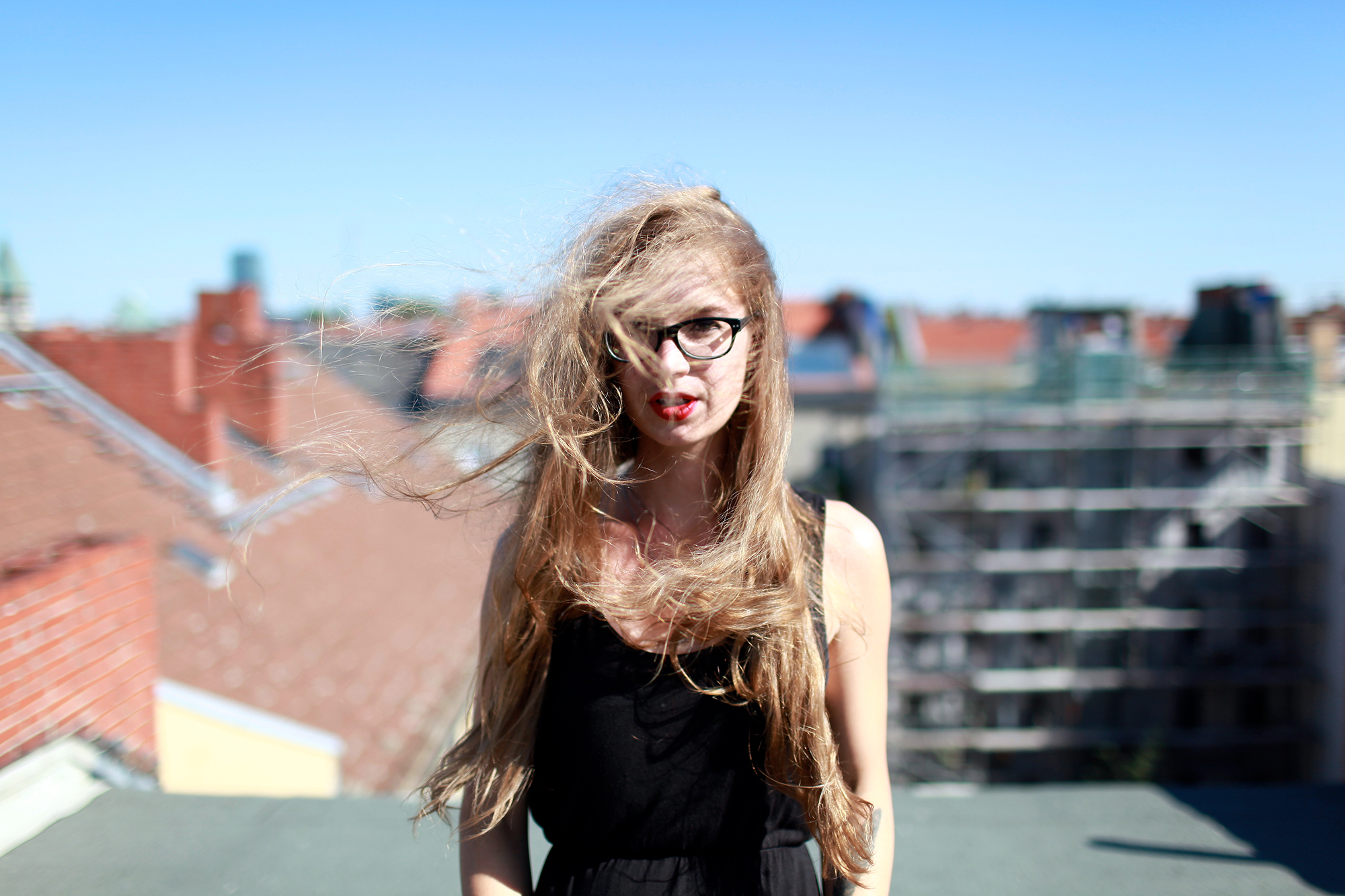 Antipodeans are well-known worldwide for their itchy feet, and Ivy Rossiter, creative force behind ever-evolving musical project Luckless, is no exception. In 2015, armed with bag of clothes, a 1964 Silvertone electric guitar and a British passport, Ivy toured Luckless around Europe for six months before settling – for now – in Berlin, where she’s writing her third album, a follow-up to the critically acclaimed Vindication Blues.

Drawing inspiration from influences like PJ Harvey, Sparklehorse and Mark Lanegan, Ivy formed Luckless in Auckland in 2010 firstly as a solo project, later expanding it to a four-piece. These days, an interchangeable line-up gives Luckless complete flexibility to both build and strip down the songs, which dance somewhere around melancholic and veracious.

On a sunny afternoon in Kreuzberg, we join Ivy to get to the heart of just what it means to be living and working as an independent musician in Berlin. 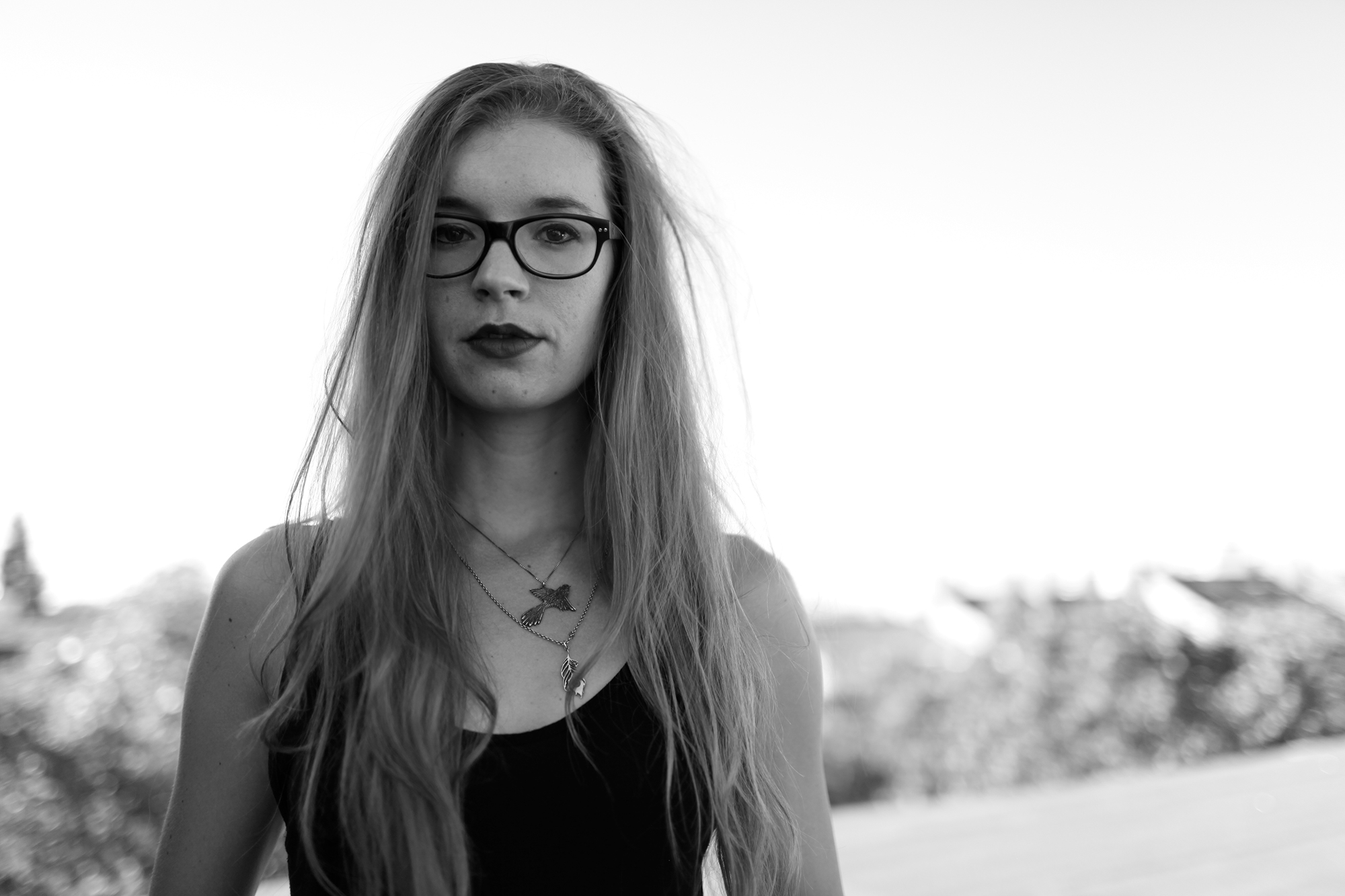 Why don’t you start by telling us how Luckless was formed and how it has evolved to its current state. I wanted to start a project, rather than just be my own self onstage. I wanted a project name to subvert people’s expectations; I also wanted the project to be able to grow or shrink as necessary as other players came and went. I started with a loop pedal and a drum machine, then my first drummer came on board. A new drummer came along for the second record and we were joined by another guitarist and a bass player for the second record, now I’m back to performing solo for the moment.

What are you working on? I’m writing new material for a third record and trying to figure out how it’s going to sound. I’m also booking shows for later in the year, including a two-week UK tour. I find it hard to write on the road, so I’ve been getting back into the swing of making new things now that I’m a bit settled in Berlin. And after a few months of being in one place it feels really good to be getting back out on the road so I can play some of those new songs. One feeds the other.

What inspired you to move the Luckless project from Auckland to Berlin? New Zealand is a beautiful place with a lot of very creative and inspiring musicians in it, but it’s very small. You can tour for three or four weeks and play just about every venue in the country then not be able to back to those towns for six months, and it’s hard to make a living from music unless you work with a wide range of audiences. I was hoping that I could make music for listening (rather than dancing or party music) a little more sustainably over here.

The first few months were the typical first Berlin months – housing, paperwork and language woes. Now there are more music-specific challenges: how to make a new record in a new city where I only know a few people, where I’m financially in a more precarious position. I’ll keep you posted on how ‘overcoming’ that one works out. [Laughs] 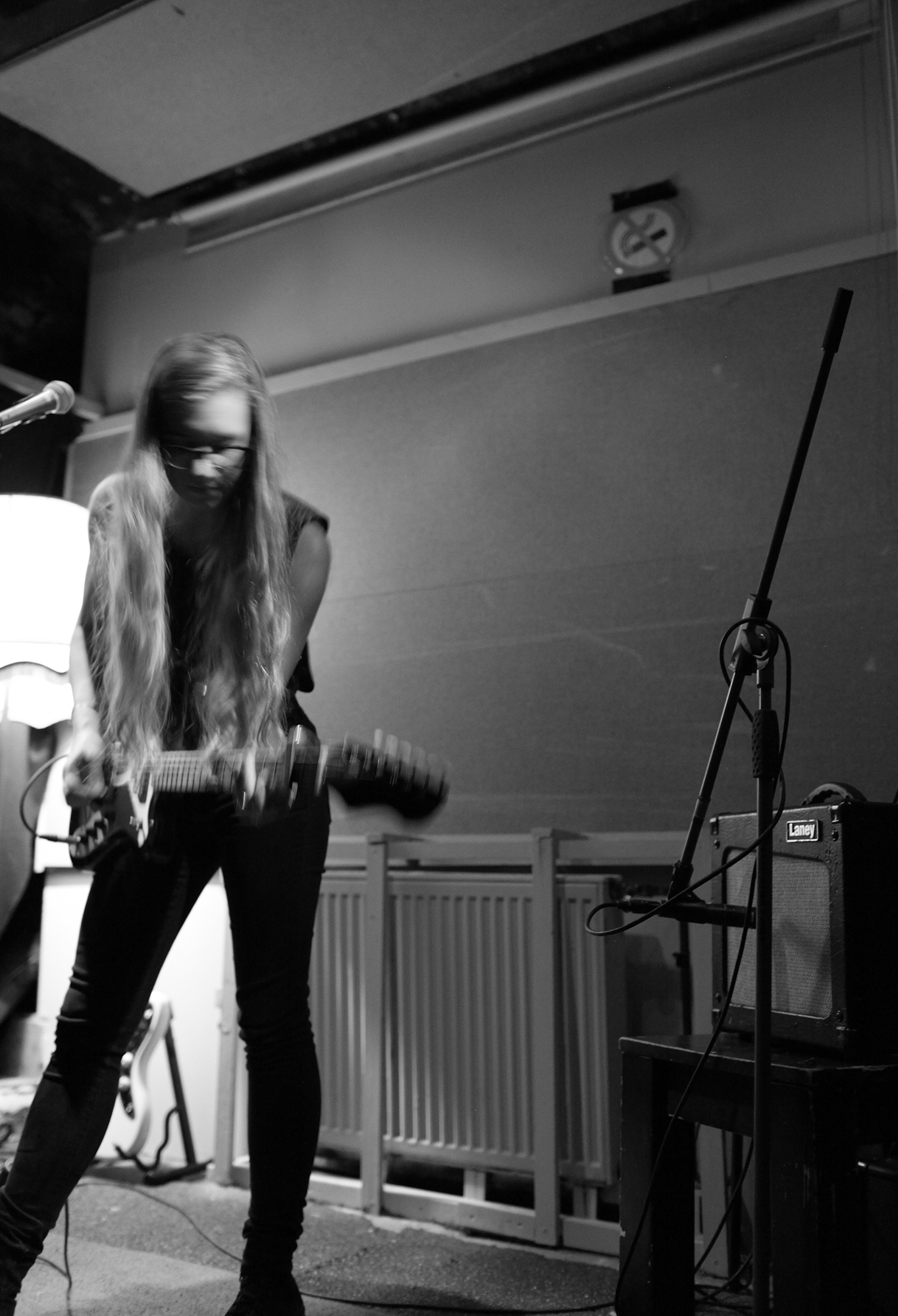 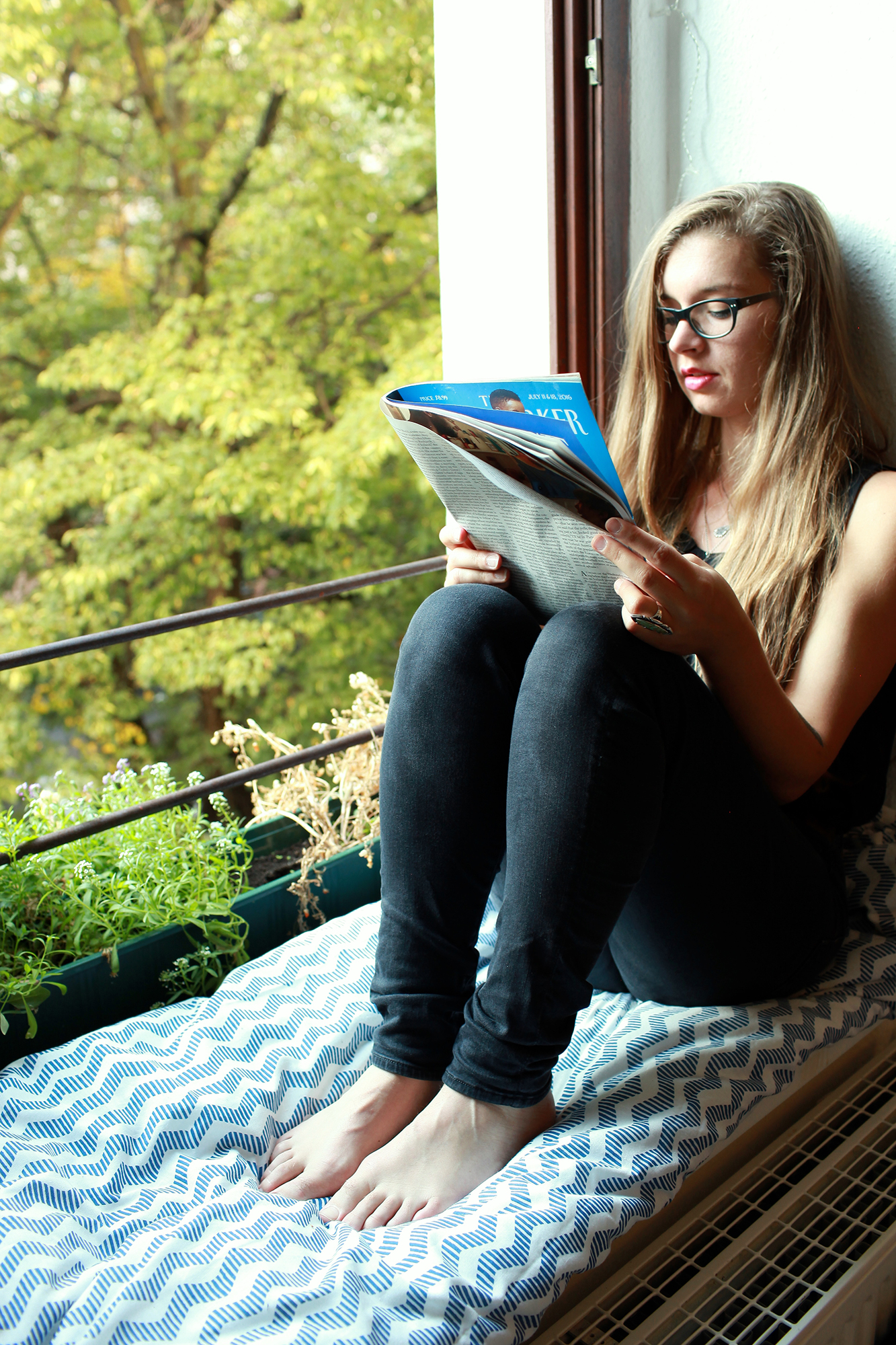 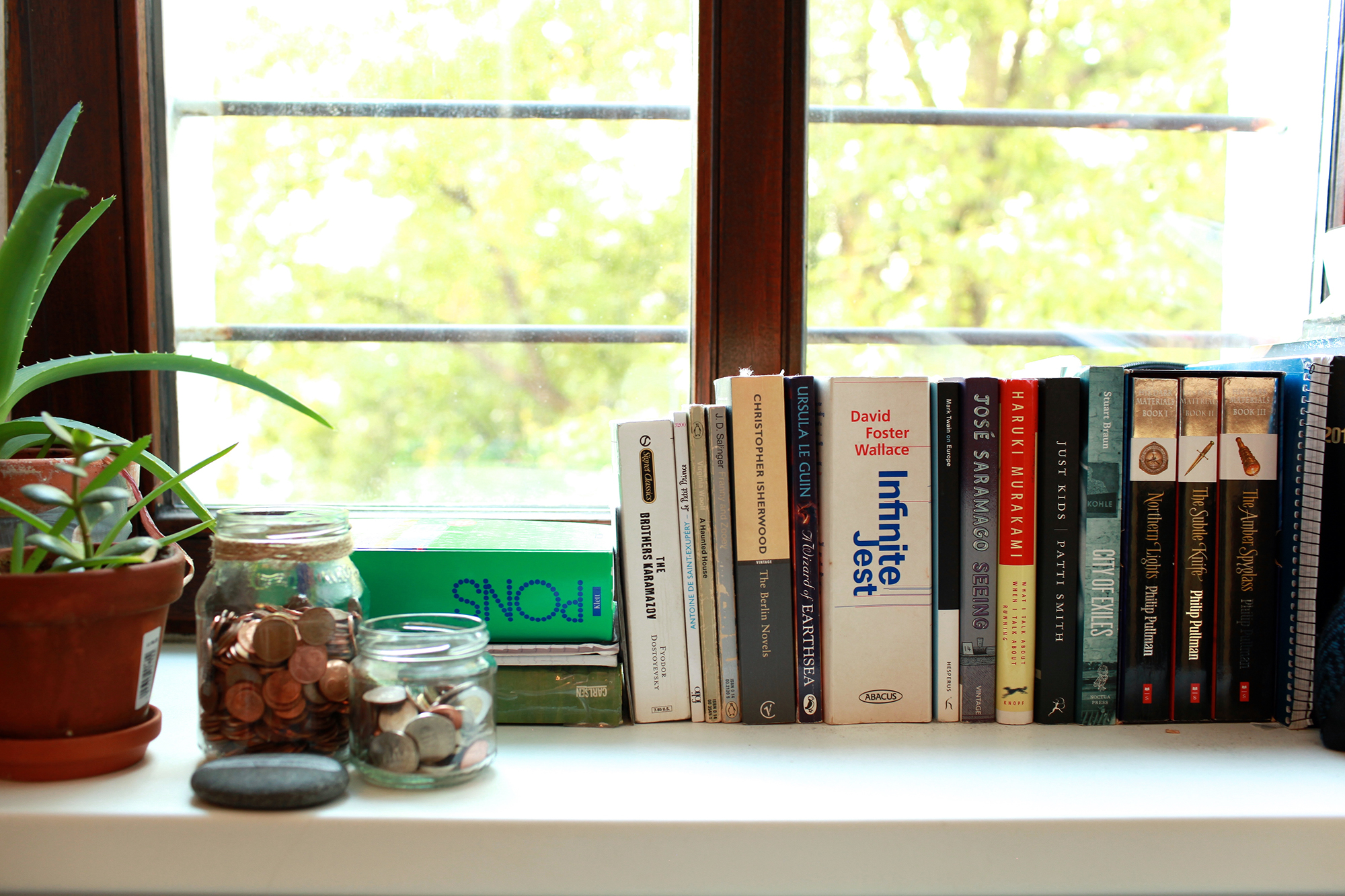 Here I’m able to spend a lot less time keeping the wolves from the door, and more time making things.

What effect do you feel Berlin has on your creative process? Here I’m able to spend a lot less time keeping the wolves from the door, and more time making things. But it’s easy to be distracted. Meeting people is hard – even the word ‘networking’ gives me the shivers – and with a live music scene as diverse and complicated as Berlin’s it feels like you’re very lost in the mix.

What have been some of the highlights so far of your time here? The shows I’ve attended rather than played have been my lifeline. I saw PJ Harvey for the first time here. I’ve also been able to reconnect with other folks I know from New Zealand that have relocated over here like Richie Setford from Bannerman and Freddy Fudd Pucker, and I’ve played some excellent shows with them.

What musical projects are you involved in other than Luckless? I’m involved in the Open Music School, a Give Something Back To Berlin project designed to offer free music lessons to newcomers and refugees in Berlin which was started by Tom Young of Freddy Fudd Pucker. We’ve been running for about four months now, and while we’re still small, I think we’re a cool point of contact in the city. I’ve met musicians from other excellent projects there – All These Animals, Murmur Tooth, Mega! Mega! – and my students on otherwise grumpy Monday nights keep me from getting too caught up in the hamster wheels in my head. The other teachers are all good people, and have been in the city a lot longer than I have, so they’ve got some great advice and help when I need it. What aspects of the Berlin music scene stand out compared to New Zealand? The scale of the town – there are so many venues, so many events. You could easily spend every night of the week out and not at home working on your own thing. At the same time, I think it’s easy to get a bit stranded here in the middle of everything. There’s certainly no one that I know that is trying to make waves in Berlin, it’s just too big for that. In New Zealand, if you get two or three tastemakers on board, all of a sudden you can be playing every A-list event without even having made an album or having been on a tour. It’s easier to make waves, but it’s a very small pond.

Berlin is a great jumping off point though – there’s an endless supply of people to meet, advice to get, and every tour worth seeing comes through here.

Have you felt supported by Berlin’s creative community? I’m not sure I’ve seen much community in Berlin yet. I’ve seen friends who play shows together, but it seems more ad-hoc rather than collaborative. In New Zealand there are a few key venues where you can go and meet just about everyone you need to. In some towns, more well-known bands very consciously help and nurture acts that they believe in with shows and recording and opportunities – it’s a very incestuous creative scene. You can feel a part of something very quickly.

But then some scenes can be very protective of their little patch of turf. I’ve found a lot of the individuals I’ve met here to be very generous with their contacts and advice. My buddy Tigeryouth I actually met in Bielefeld, but he lives in Berlin now and we’ve toured together and gigged together, he’s generally been a top person. I’m supporting him for two weeks on his album release tour in October and November, which I’m ecstatic about. 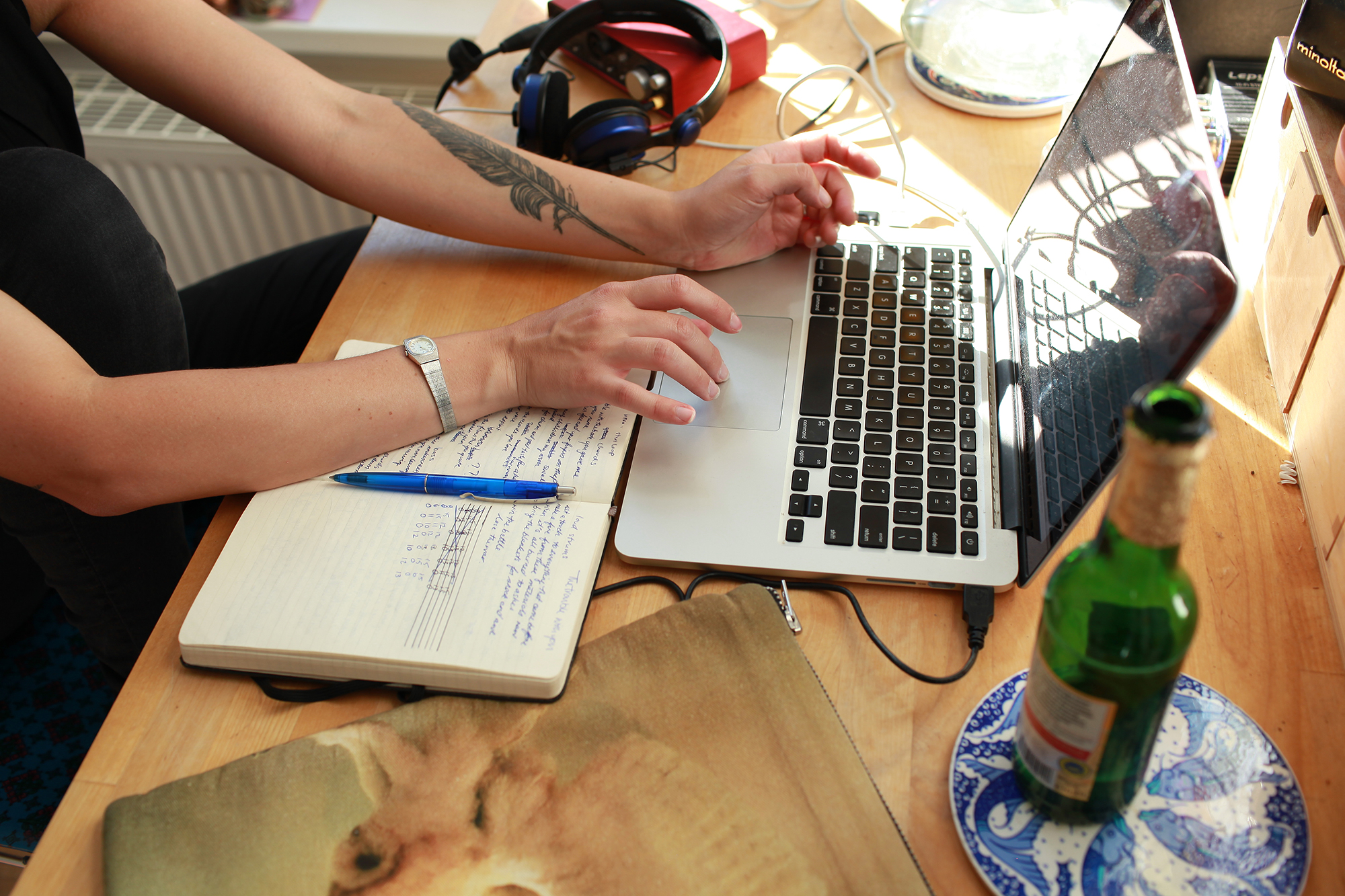 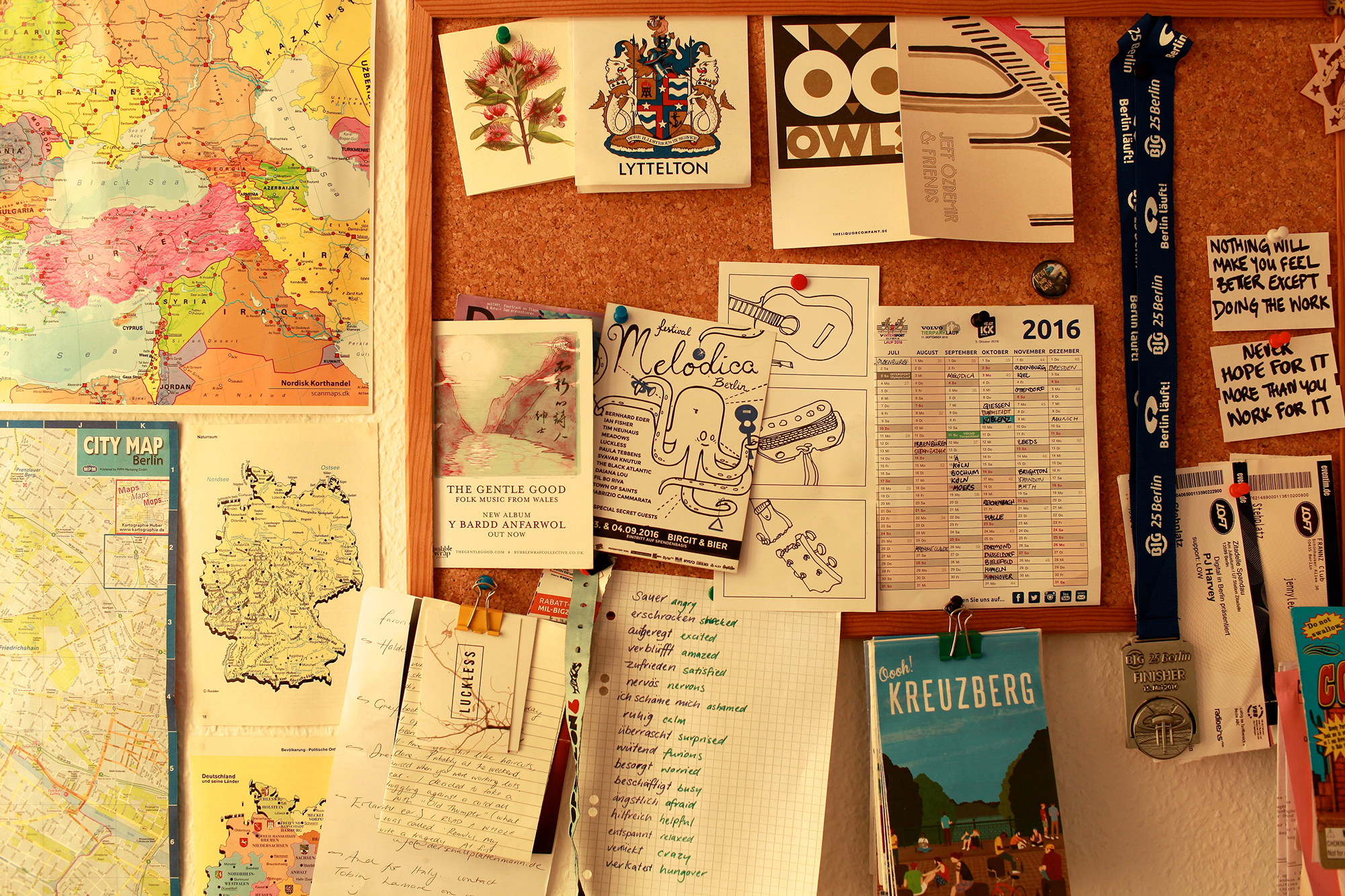 I was kind of shocked at how much fun it is to go to a club and dance ‘til my legs are made of spaghetti.

How are you finding Berlin’s music scene? I was very much a live music snob, and was approaching the whole electronic scene with a bit of skepticism – something I should experience, rather than wanted to. But then, it’s such a cliché, but I was kind of shocked at how much fun it is to go to a club and dance ‘til my legs are made of spaghetti.

I’d fallen out of love with loud music venues at home as well; here there is so much amazing punk rock and hardcore happening. Through friends of mine I’ve started reconnecting with the music I listened to as an eighteen year old.

As an independent musician, in what other ways do you support yourself? To start I was pretty much exclusively a street musician over the winter and spring. I took some time off touring to settle into Berlin and find an apartment, and learn some German, and so started playing in U-Bahn stations three times a week to keep the wolves from the door. It wasn’t easy – getting permits for good stations means getting up at 5am on a Wednesday and traipsing across town to the requisite BVG office. I spent a lot of the winter ill from a cocktail of subway air and pocket-coins, but with no German and an armful of folk covers it seemed like the quickest way of being self-sufficient.

A friend then connected me with an online English teaching job, which now helps with rent and bills, and between a couple of busking days a week and getting back out on the road, I’m managing a little better than I was before. 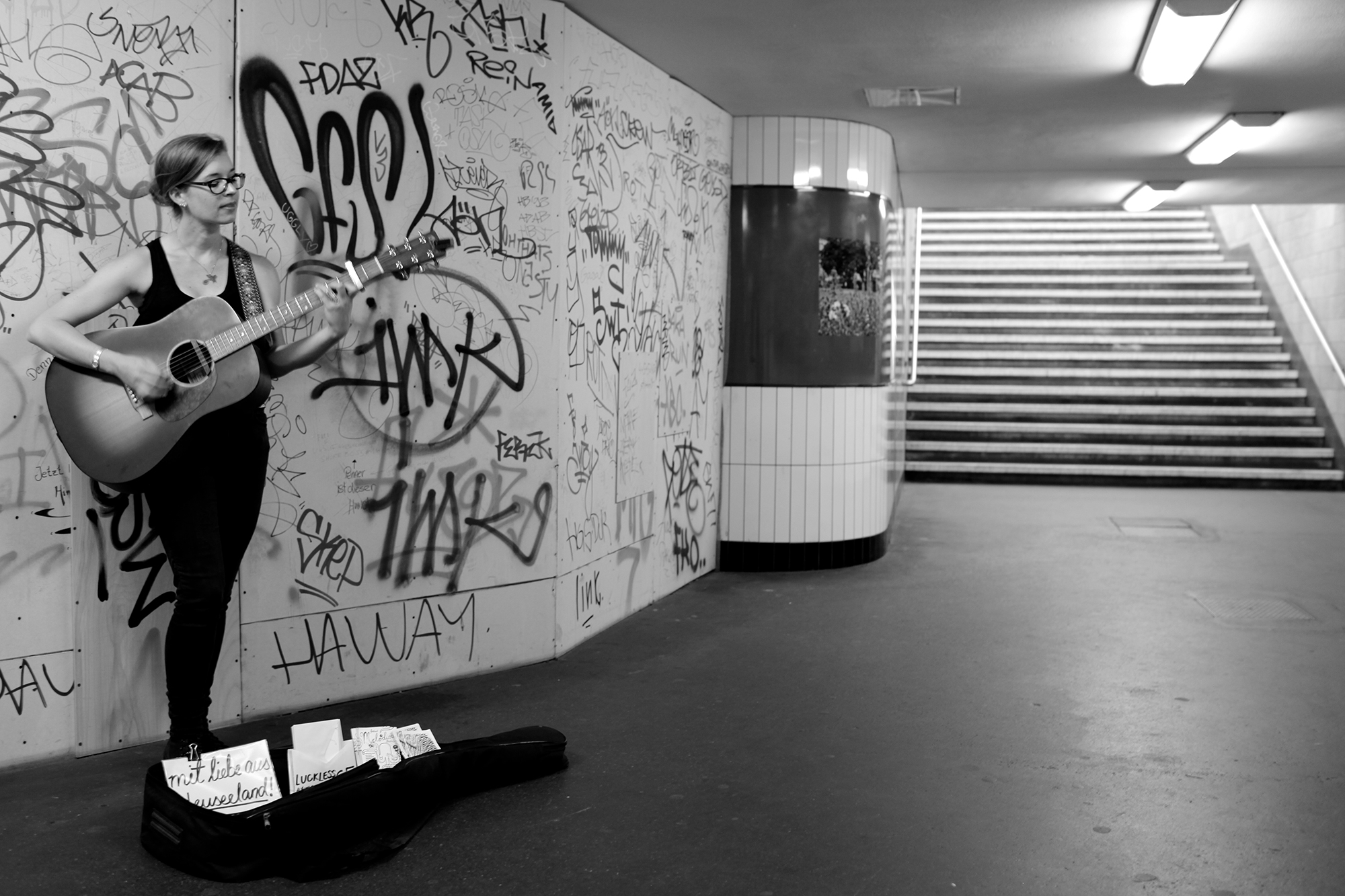 What advice would you give other artists if they were thinking about relocating to Germany? Do a language course. Even when it feels horribly like being back at school, it helps with the uncontrollable anxiety that comes over you when you might have to speak to a stranger in public. Just because you can live in Berlin in English doesn’t mean that you should have to feel that fear.

How have you found the overall Europe tour experience? There’s a certain breed of subsistence-level musician that I think is the same no matter where you go. We’re writing songs, so that we can make records, so we can go out on the road and play shows, so we can write more songs, and make more records, and tour them all over again.  It’s not about getting to some imaginary level of success, looking to an external industry to give you some kind of crown, it’s about the process of building something brick by brick. The best thing about touring is meeting those musicians and knowing that you’ve found your people. Those people here know each other, play the same venues, have the same struggles; they all know how amazing a clean pair of socks is, just like at home.

What gigs do you have coming up? Melodica Festival at Birgit and Bier is going to be an absolute sweetheart of an event. So many wonderful performers and such a dreamy venue; I really can’t wait. 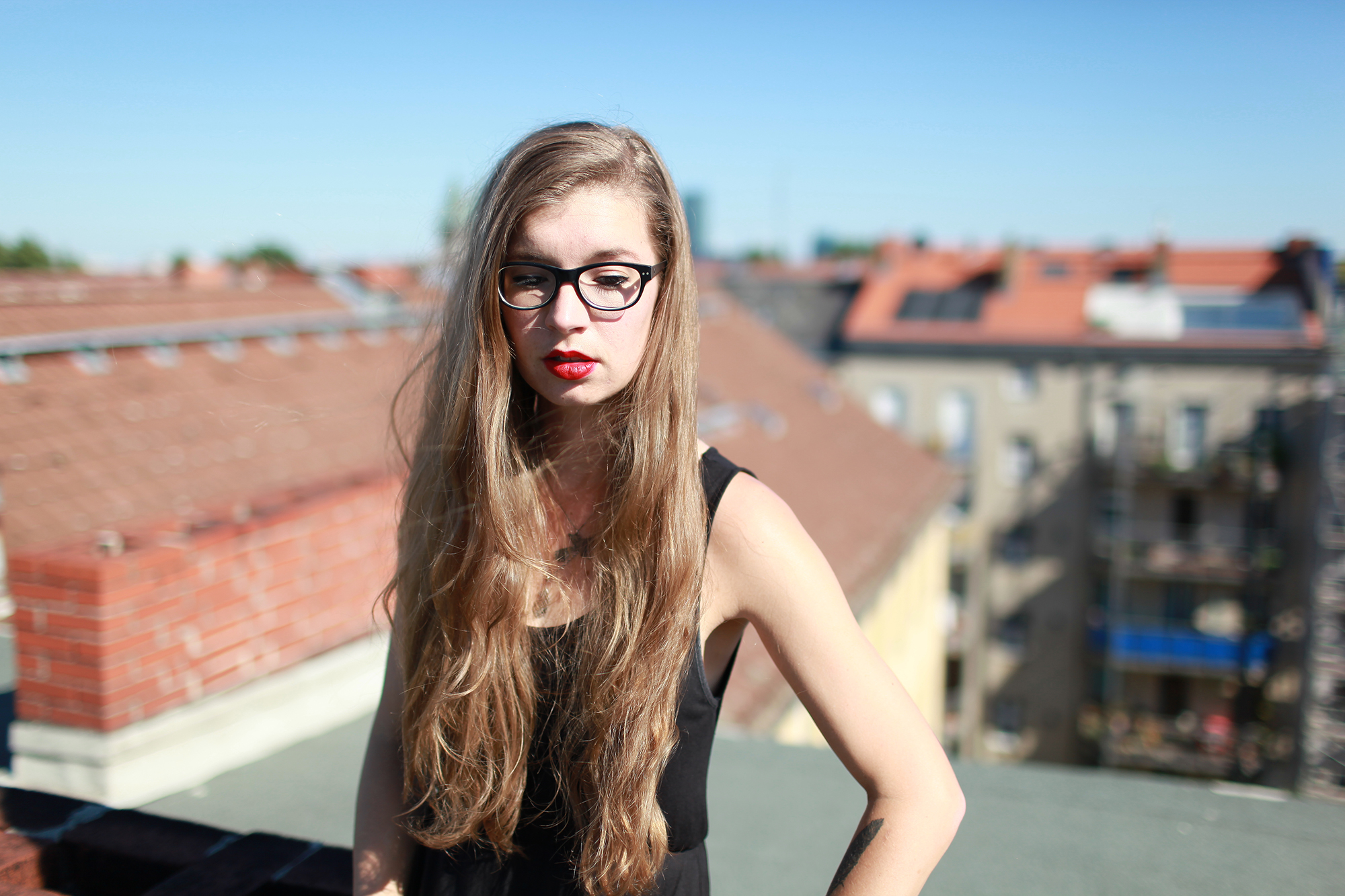