Inside the Mind of Gaff-E 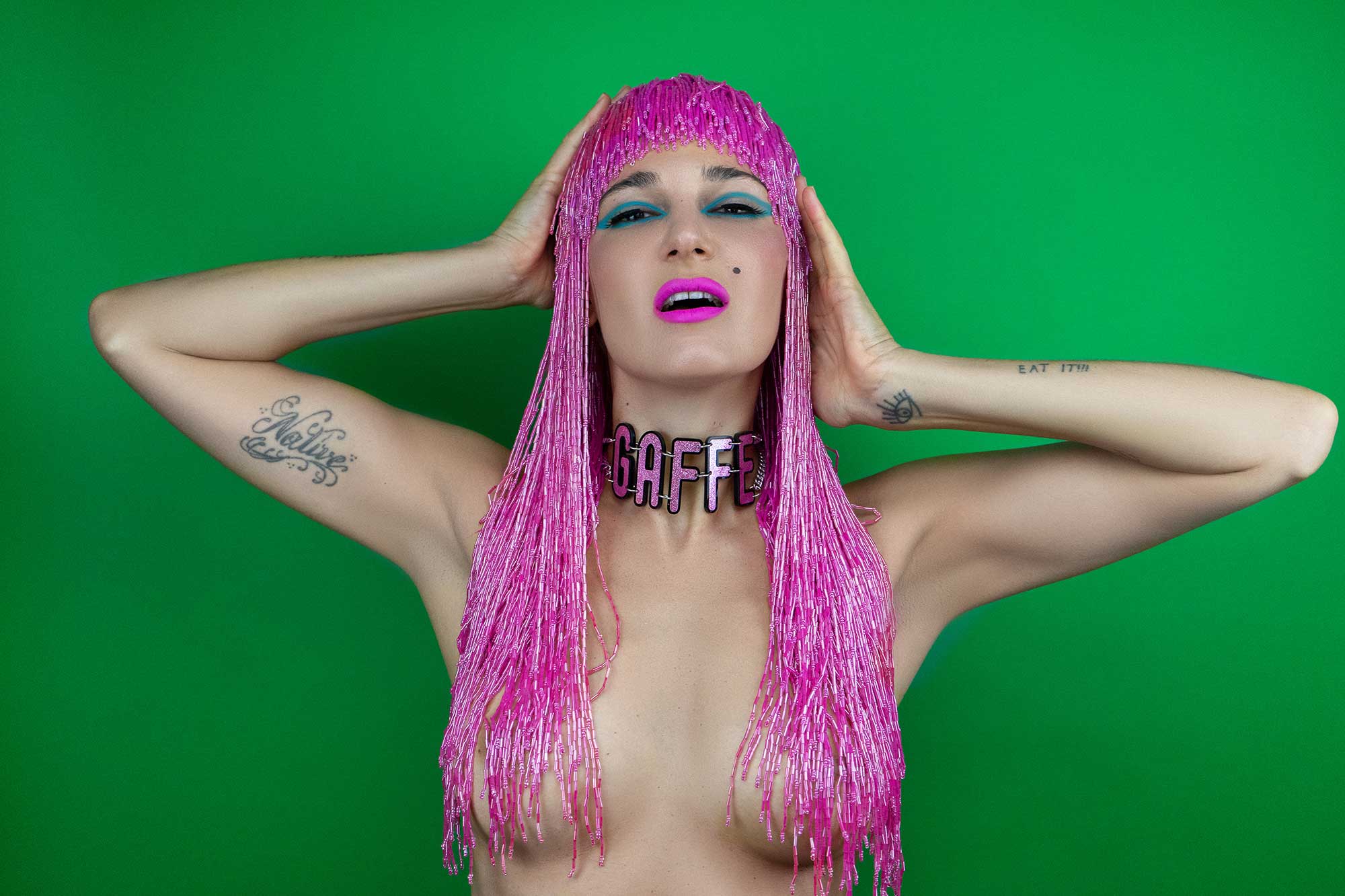 Words By Jonny Tiernan
Photos By Main image: Shot IN & BY Doodad & Fandango

Seeing Gaff-E perform live is an unforgettable experience. She’s a writhing whirlwind of electropop power, channeling her wildcat soul into dance and movement. The looks she crafts are the stuff of legend – splashes of vivid colour and an abundance of lycra, like watching an 80s aerobics video, only on acid.

As an MC, her style is somewhere between Chicks On Speed and Tom Tom Club, fun and cool but not po-faced. As a DJ she blasts out disco bangers and fizzes with energy. Hailing from Australia, she now splits her time between London, Berlin and Sydney. Her travel schedule matches her commitment level – relentless and to the max. Gaff-E is never in the same place for too long, always performing, moving, hustling.

We caught her on a brief moment of downtime to find out more about how her music journey started and where it is going. 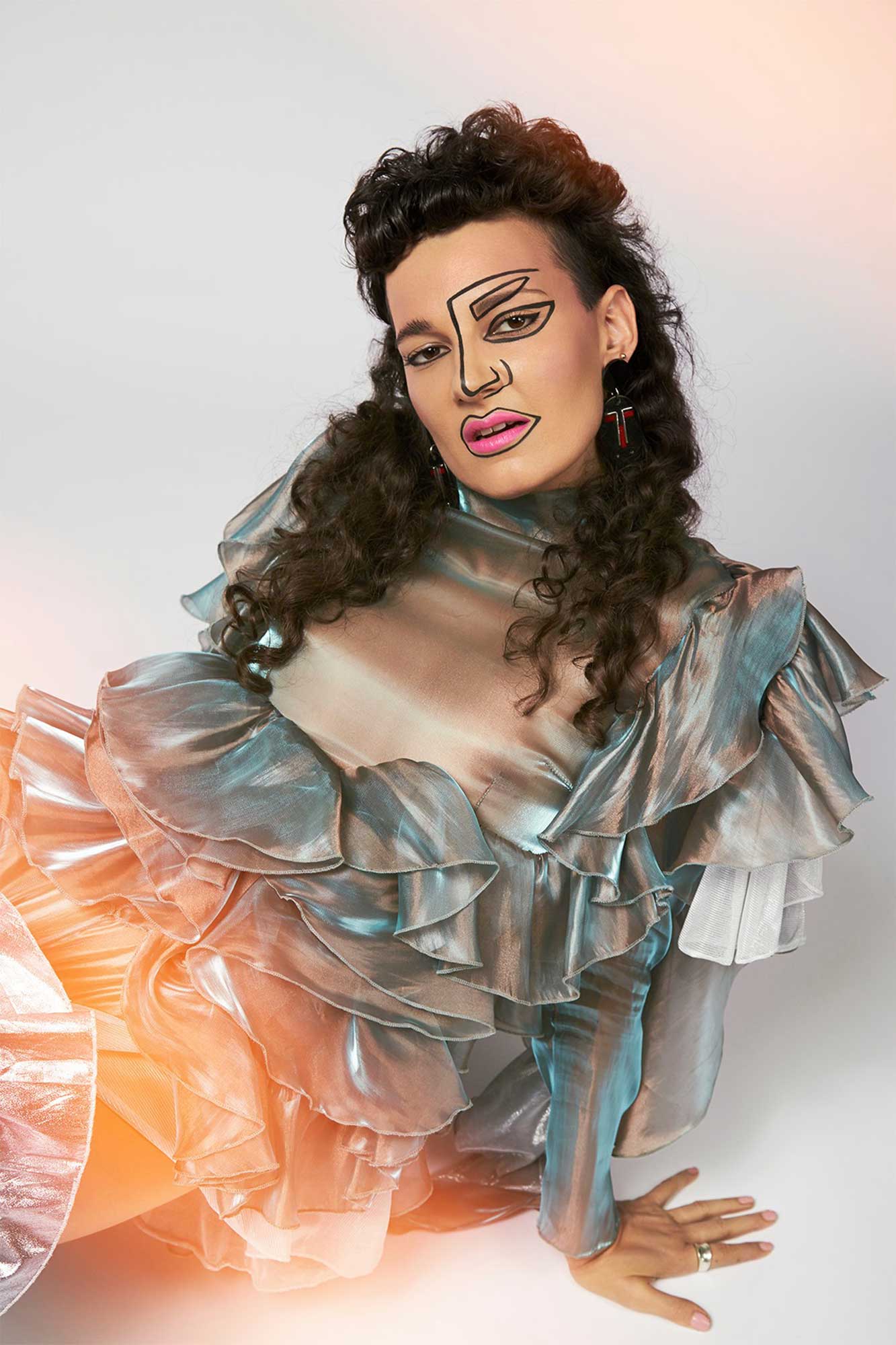 What is your earliest musical memory?
My mum asked me when I was five if I wanted to start playing the piano. I said yes. I used to make up songs while in the garden for the easter bunny and Santa Claus (telling them how much I loved them) mid-year to try and get presents early! Then one day… my wishes were granted and I discovered six gold eggs in a plant. Mum must have felt sorry for me! Problem was, once she did that, I found it hard to stop.

When did you start making your own music, how did that evolve?
When I was fifteen, in music at high school, I had to write a composition for five instruments and get other class members to play the piece live. I think that’s the first time I ever made my own song!

How did you go from this to performing as Gaff E?
When I was twenty, I was in upstate NYC and hanging with my bf at the time (and now best friend) Thomas Bullock. I mentioned to him that I was thinking about becoming a rapper. He jumped up super excited and told me that was a great idea and said we should go to his barn converted studio right there and then and start making this idea a reality. I couldn’t believe how easy he made it sound. He gave me a drum machine, showed me how to use it and BAM… two days later, we had five tracks good to go… MC Gaff E was born! 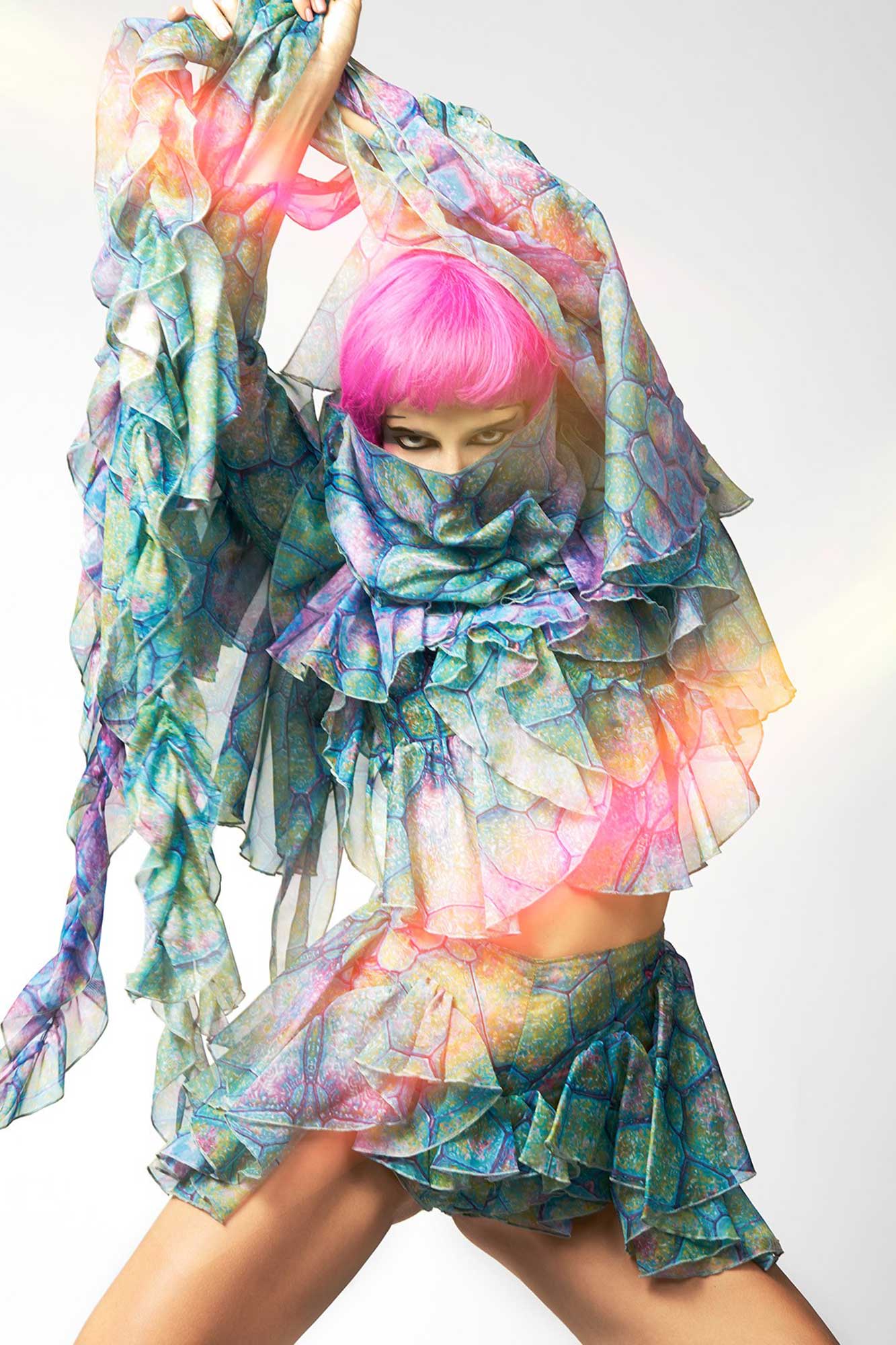 Special outfits just speak to me! It comes from the heart and is totally instinctive.

In these first recordings, where were you pulling your ideas from?
The lyrics were super naughty. In all honesty, I have always enjoyed “shocking” people and I have never had any limits. Some of my first ever tracks were called Britler (she is half Britney, she is half Hitler), Peak for a Week, Whose My Babies Daddy. So you get the idea… Music wise, no influences. Just created sounds I liked. I still to this day make music instinctively.

If you still make music instinctively, what has changed about your process or the way you create?
I know so much more now than I did then. I knew nothing back then except how to make music. Now, I am influenced by other artists whether I like it or not!

What artists are you taking influence from now?
Divine, Suzy Q, Tom Tom Club are a good vibe for me in the studio.

You’ve got an amazing visual style, where does this come from?
I don’t know how but I’ve always known what I like the moment I see it. I feel it strong. Special outfits just speak to me! It comes from the heart and is totally instinctive. Friends who have known me for years still can’t work my style out. I like to keep people guessing. I would say travelling as much as I do has had an impact on the types of textiles I’m drawn to. I connect with many different types of traditional designs from all over the world.

Have you ever experienced negative reactions to your look?
Hahaha! I used to write down whenever someone said something negative about how I looked so I could use it for material cause seriously, you cannot make up the kind of weird shit people say when you look the way I do! When I had short coloured hair a few years ago, that was the most intense five years I’ve ever experienced. It was before it became acceptable to have coloured hair. That combined with my colourful style was WAY too much to process for normcore. I noticed a massive difference when I dyed my hair back to brown. I went from making people angry to people sleazing on me and being nice again. In saying that… I’m currently thinking about going back to neon coloured hair, hehe. 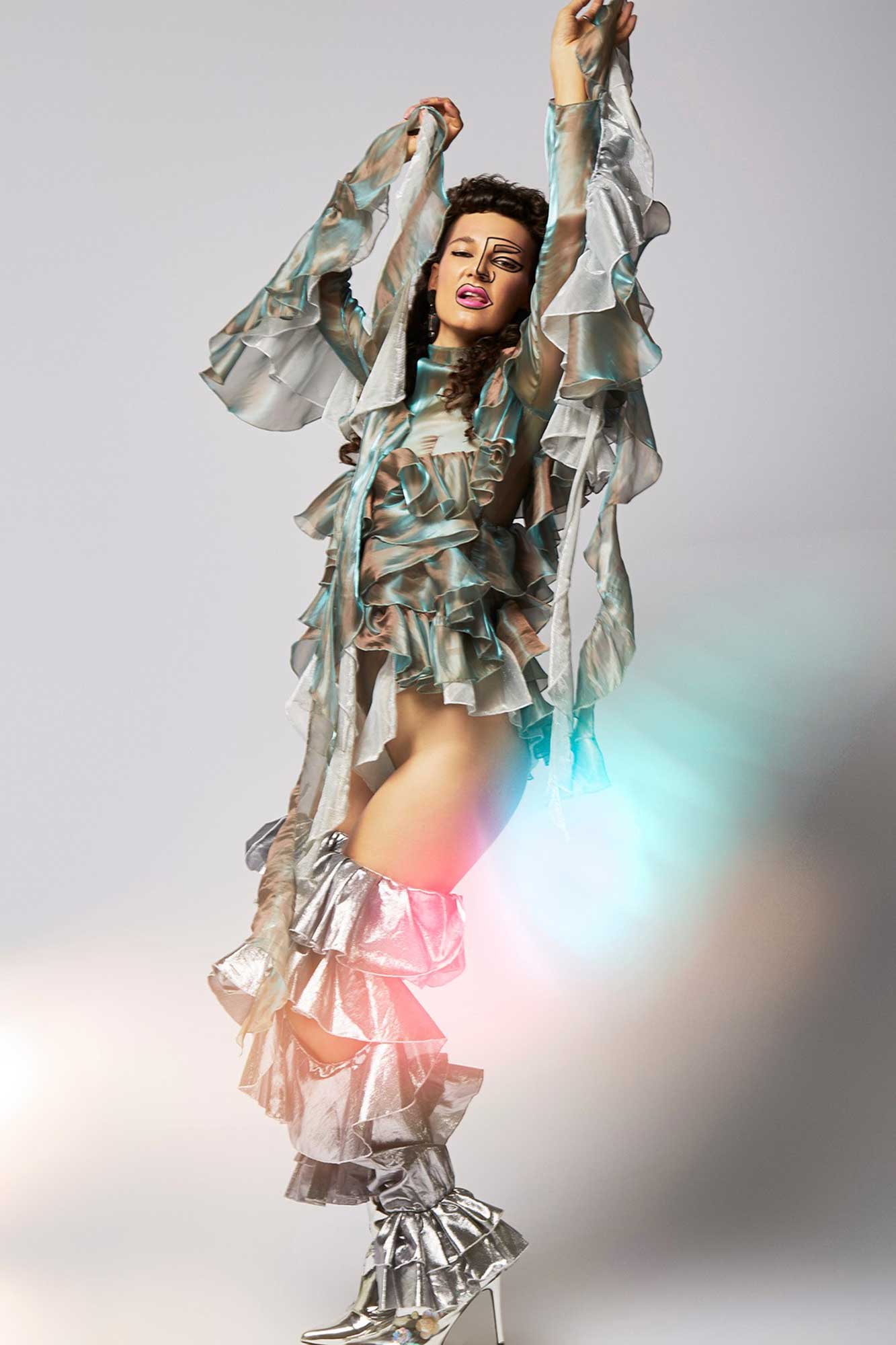 I want to make more art dedicated to the survival of the planet to help create more awareness.

I think that your look is incredibly strong, in the sense that you come across as a strong woman, and some people can’t cope with that.
Spanks! Currently in my life people react more positively towards me than ever before so I can’t complain! Buuuuut when I had short hair, people couldn’t work out my gender or sexuality and THAT was what seemed to be the most challenging I think. I was confusing everyone on a daily basis (just the way I like it). I prefer for people to FEEL something when they experience my presence (on stage and off).

What type of things do you write songs about?
Mainly I like to encourage people to be themselves, embrace their weirdness and cosmic energy and release RELEASE through dancing, having fun, being healthy, taking care of the planet and listening to our bodieeeeeees.

Can you tell me about your most recent single and what inspired you to write it?
I wrote it on behalf of all endangered animals living on this planet. I want to make more art dedicated to the survival of the planet to help create more awareness. More people gotta wise up and not take what we have for granted before it’s too late! The internet is good for this but we all gotta get together and move forward as one. THINK OF THE CHILDREN!

What cities do you split your time between?
My main ports are Sydney, Berlin and London but I move around every few days most of the time. I go from summer to summer, spending five months in Australia and seven months in Europe with the occasional visit to Asia or USA each year.

What influence do each of the cities have on you?
Sydney (and Australia in general) is food for my soul. There is a wonderful thriving queer scene there and the beaches are super beautiful not to mention the never ending sweet summer vibes. I find London is super inspiring. Even after 10 years based there, I am always so hungry to get back. I feel the most ALIVE in London and I enjoy the hi-energy pace and chaos! Berlin is good for creation and ME time. I get the most done when I’m in Berlin creatively. There is a great selection of underground artists knocking about and a lot of weird and wonderful spaces to investigate. I collaborate a lot in all of these cities more than anywhere else on the planet.

What are the challenges and benefits of a nomadic lifestyle?
TRUE FREEDOM! Also another plus is I’m not materialistic cause I don’t want to move around heavy items. I pretty much just own clothes and some equipment and ONLY keep clothes I wear. Being nomadic means everything is exciting and new all the time. Friends say, they don’t know how I do it cause to them it looks tiring but I get so much energy from being on the road. It’s hard to explain unless you’re living it! I meet so many brilliant souls along the way who give me life. I feel like I’m always learning and growing at a steady pace. I feel like I have multiple homes all over the world. Biggest challenge would be holding down a relationship. Someone once described me as the Tasmanian devil, whirl-winding in and out of people’s lives. For some reason… I’m stuck in this mission and nothing and no one can stop me!

What is coming up next for you?
I have a new release with cosmic legend Daniele Baldelli in the pipeline that I’m super excited about. Movement wise, I’m about to head to London for three weeks to do some rad gigs and make my best music video to date for new track (with Surf Dancer) Petrol Witch. Then off to Australia for a couple of months to tour. Currently in talks with my pal Charli XCX about putting on a party while we’re both in Sydney touring which will be super fun like old times!

Catch Gaff-E live at the LOLA launch party, and keep up-to-date with everything in Gaff-E’s world via her site. 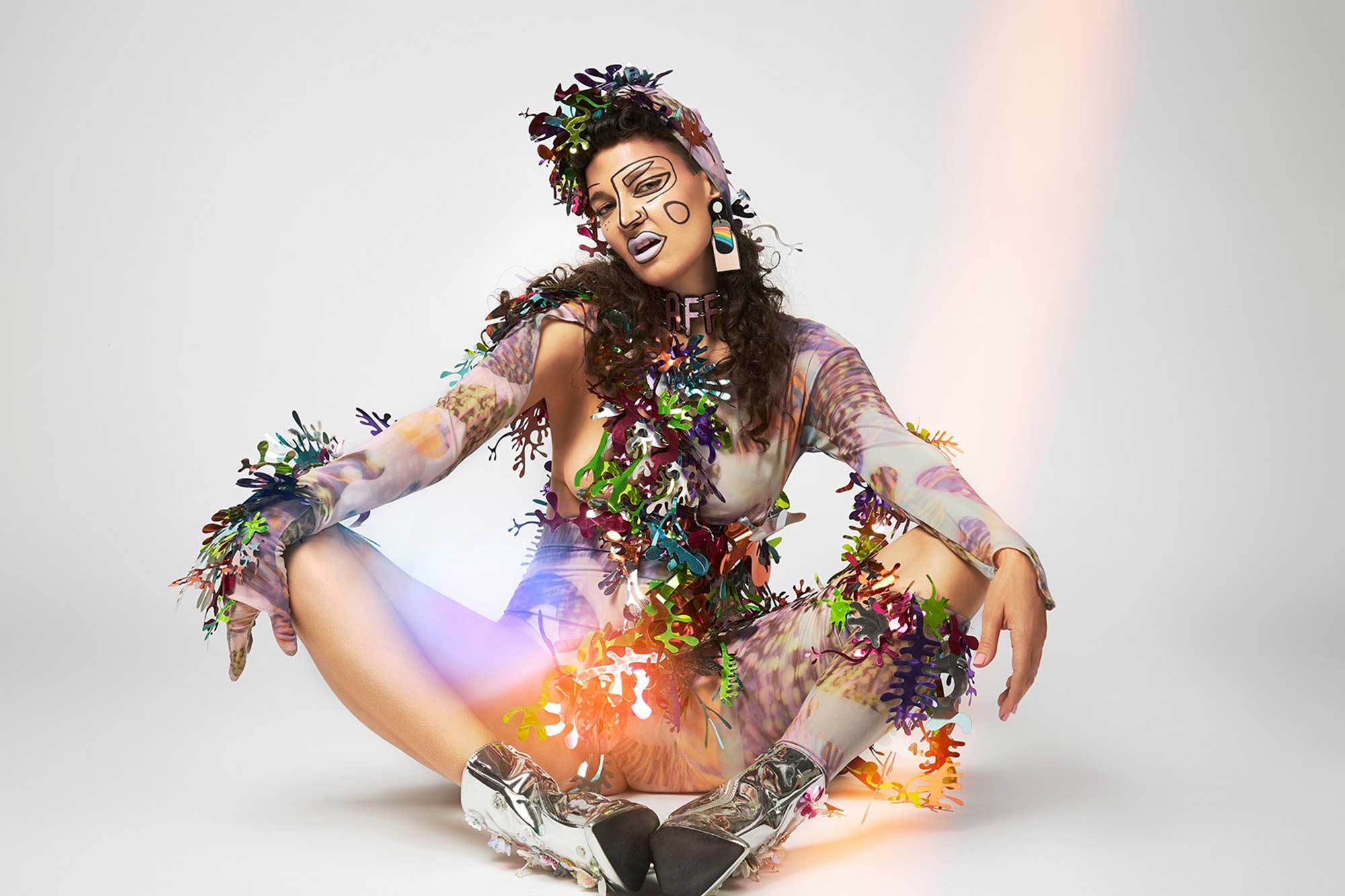