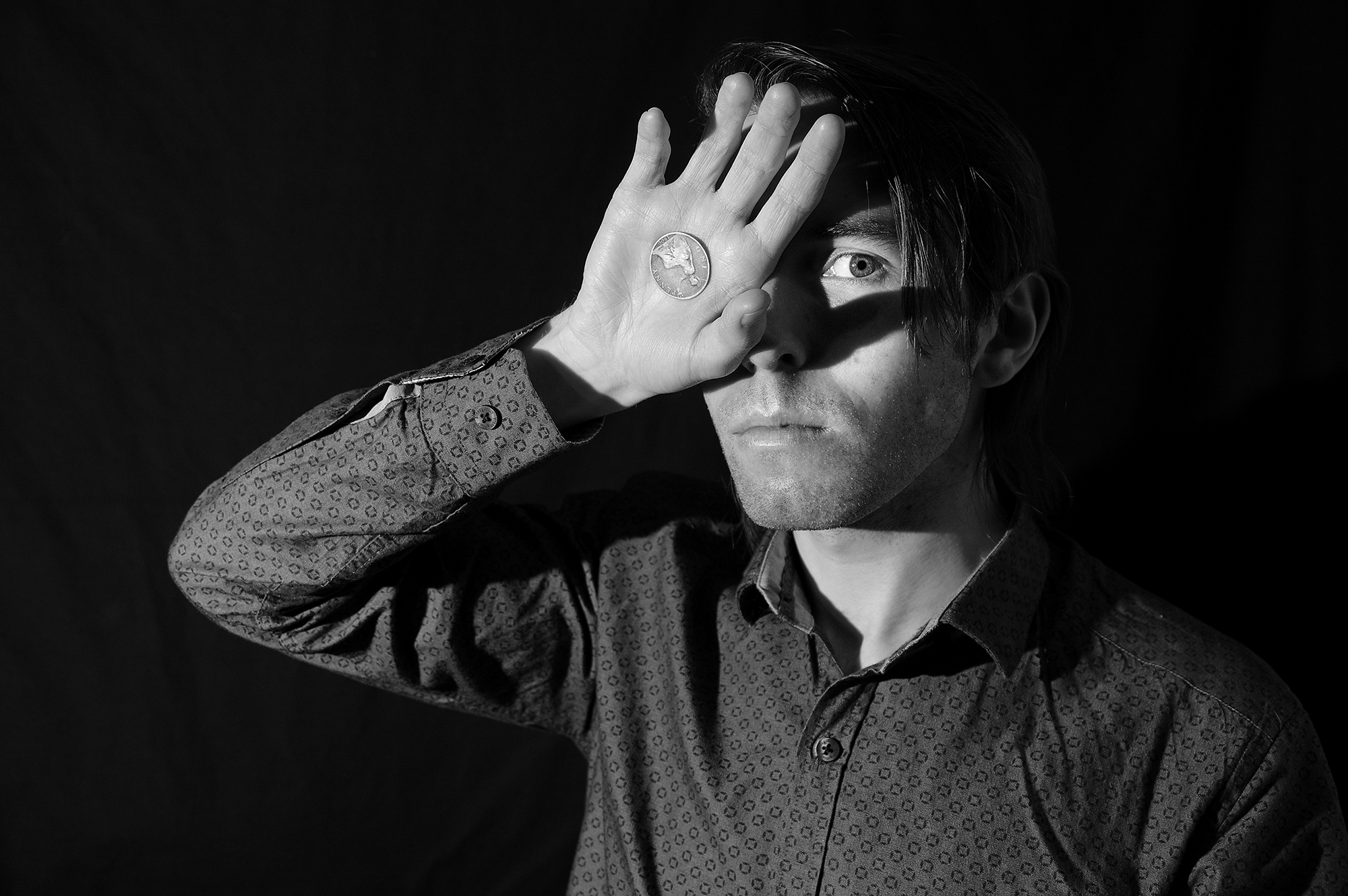 Better known as the guitarist in Belfast post-punk outfit Girls Names, Philip Quinn has recently been striking out on his own with his starker, more experimental project, Gross Net. Originally formed as a guitar/bass/drum-machine duo with Christian Donaghey, the latter’s early departure to focus on his main project, Autumns, has left Quinn to steer the ship alone – with all the artistic freedom that entails.

A stark contrast to his sunnier earlier work fronting Charles Hurts and a brief spell in Sea Pinks’ live band, Gross Net offers up a similar gloom to Girls Names but multiplies it by ten, mixing cold electronics with detached vocals and occasional industrial guitars. Following two cassette releases – a self titled EP in 2014 and this year’s Outstanding Debt – with November seeing the release of debut LP Quantitative Easing and a German tour, we talk to Philip about inspiration, Europe and the horrors of homogeneity. 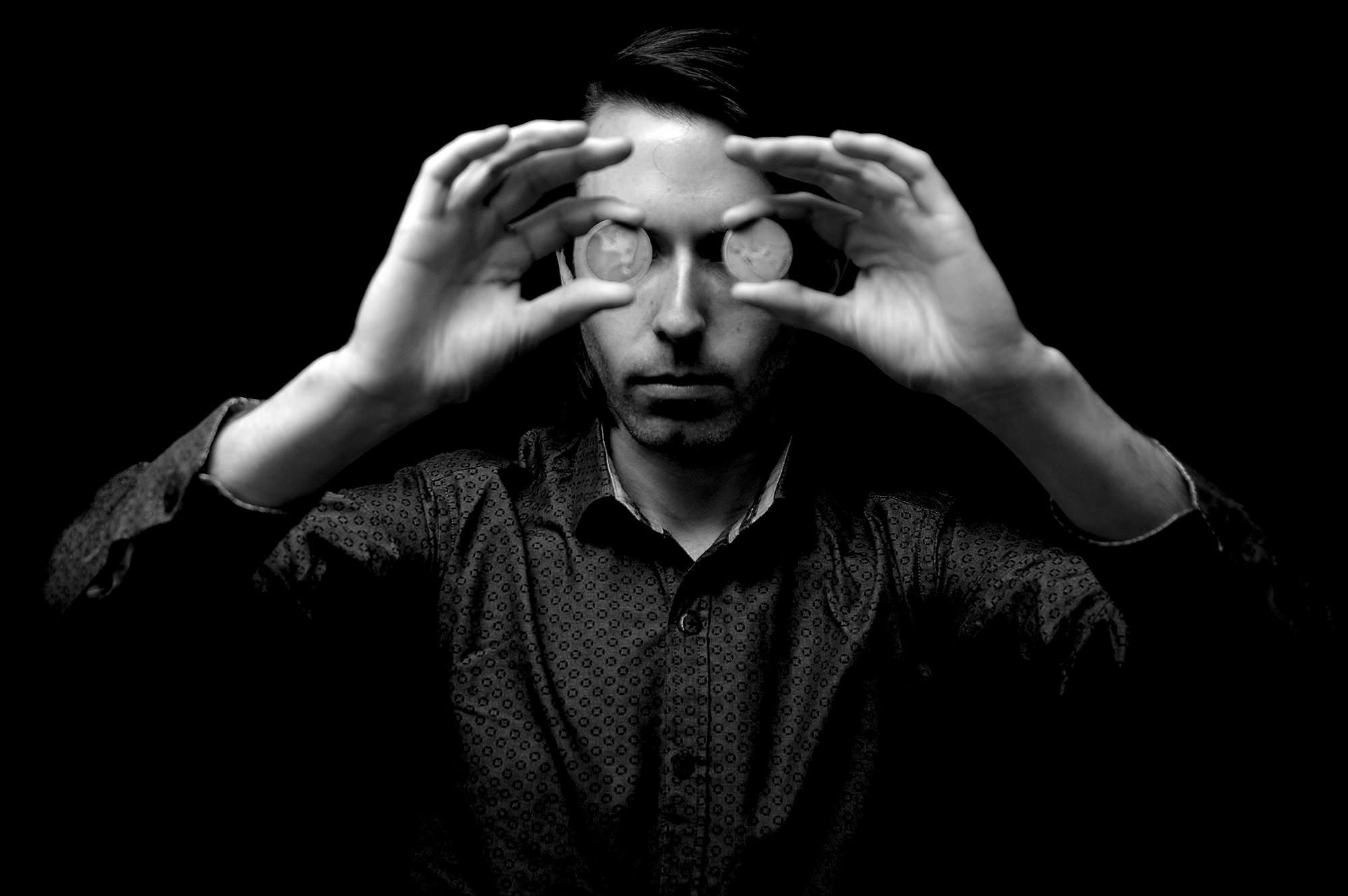 That archetypal stark, experimental sound of Berlin seems to permeate your work. Just how much influence would you say you draw from the city’s music and history? I suppose it’s there but more subtly. I’m an outspoken fan of Einstürzende Neubauten for example, but I never sit down and think ‘Oh I need to get this reference in here’ or anything like that. I’m a fan of German music but it would be neither right nor accurate to attribute that solely to Berlin. Historically too there’s a big interest there, and though I’ve studied German and German history in the past it’s not something that I’m so obsessed with that I need to shoehorn it into everything I do. I do feel like i’m at home when I’m in Berlin though, and I think the ideas that stem from being there and the feelings it brings up are more inspiring.

How has the new album built on your previous two cassette releases? Well I’ve been creeping more and more into electronic territory, but I feel no need to go into much detail about that. A workman may use different tools to build different things. What I will say is that over the previous two cassette releases I’ve been learning; learning about how to do things on a technical level and learning what I like or dislike, and where I want to go next. I’d say it’s the best lyrically, as that’s something that I didn’t care or worry about too much on the first EP. It’s also the most revealing music I’ve ever made, almost to the point where it acts like an appendage. If you listen to it you’ll get a fairly good idea of my headspace around the time I recorded it.

What prompted this journey down a darker alley, away from the brighter guitar pop of your earlier Charles Hurts project? I can understand how it may seem like some sort of musical schism or schizophrenia but I’ve always been making music which is dark. In fact, Charles Hurts would be incongruous in terms of all the projects I’ve been involved in over the past 15 years. I also saw Charles Hurts as a fast-track to stardom, as much as I’m loathe to admit to my naïvety. That’s not to say I didn’t like the music or that I don’t like more ‘pop’ music. The world would be boring without a large swathe of different music wouldn’t it? It was somewhat a case of ‘this sound is popular, let’s try and match it’, and partly ‘Girls Names won’t let me join, so how can I be like them?’ [Laughs]

Have you always wanted to make something more electronic or have things just naturally panned out that way? I think I did, but I never thought it would be possible. In terms knowing what to equipment to start off with, the costs involved, the assumption I’d need more knowledge of technology and musical theory…I never thought I’d get into it. I think having to play synthesiser when I joined Girls Names got the ball rolling and took a level of fear and mystery out of it. I wish I’d gotten into the more electronic side of things in my teens. 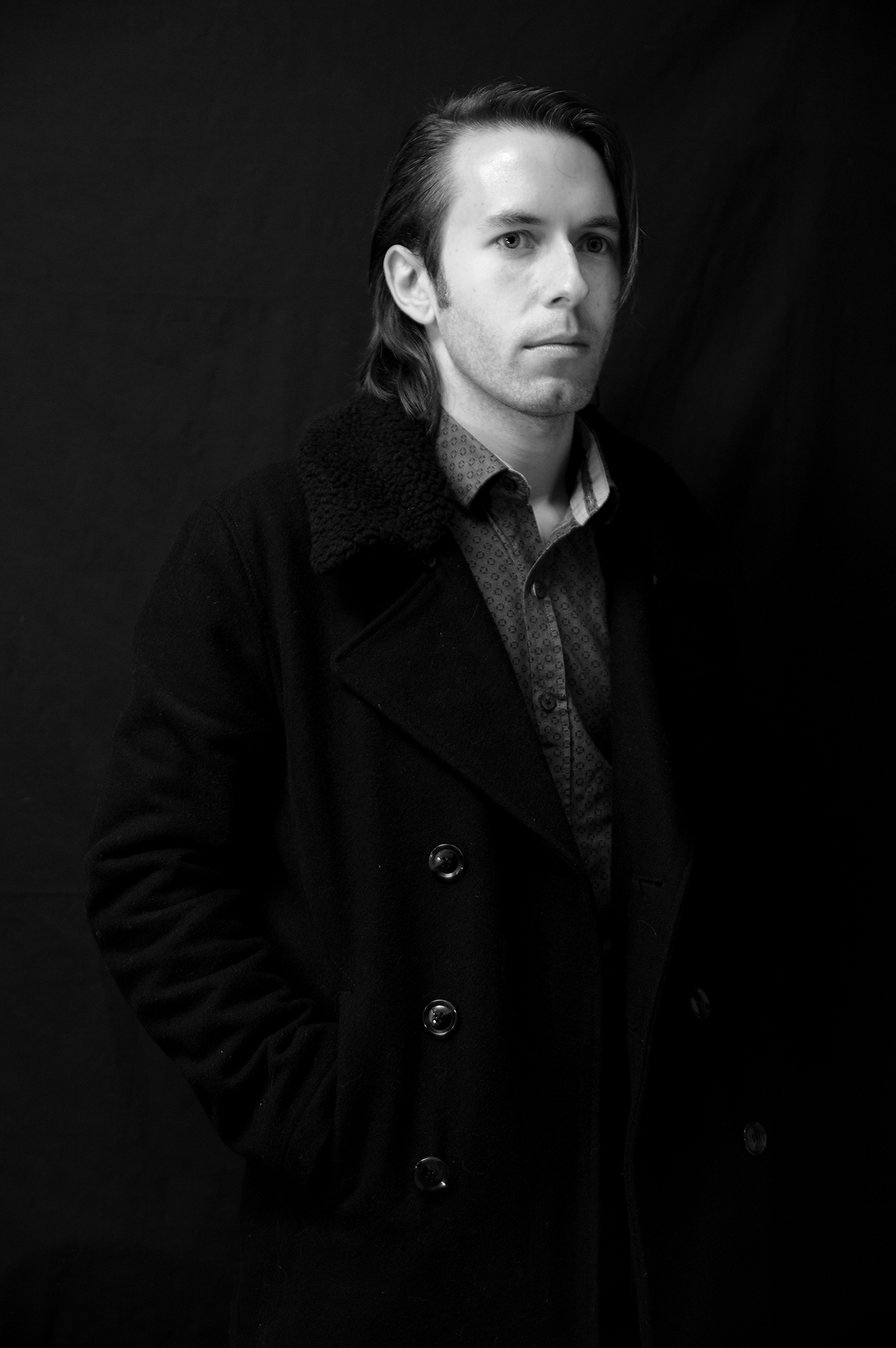 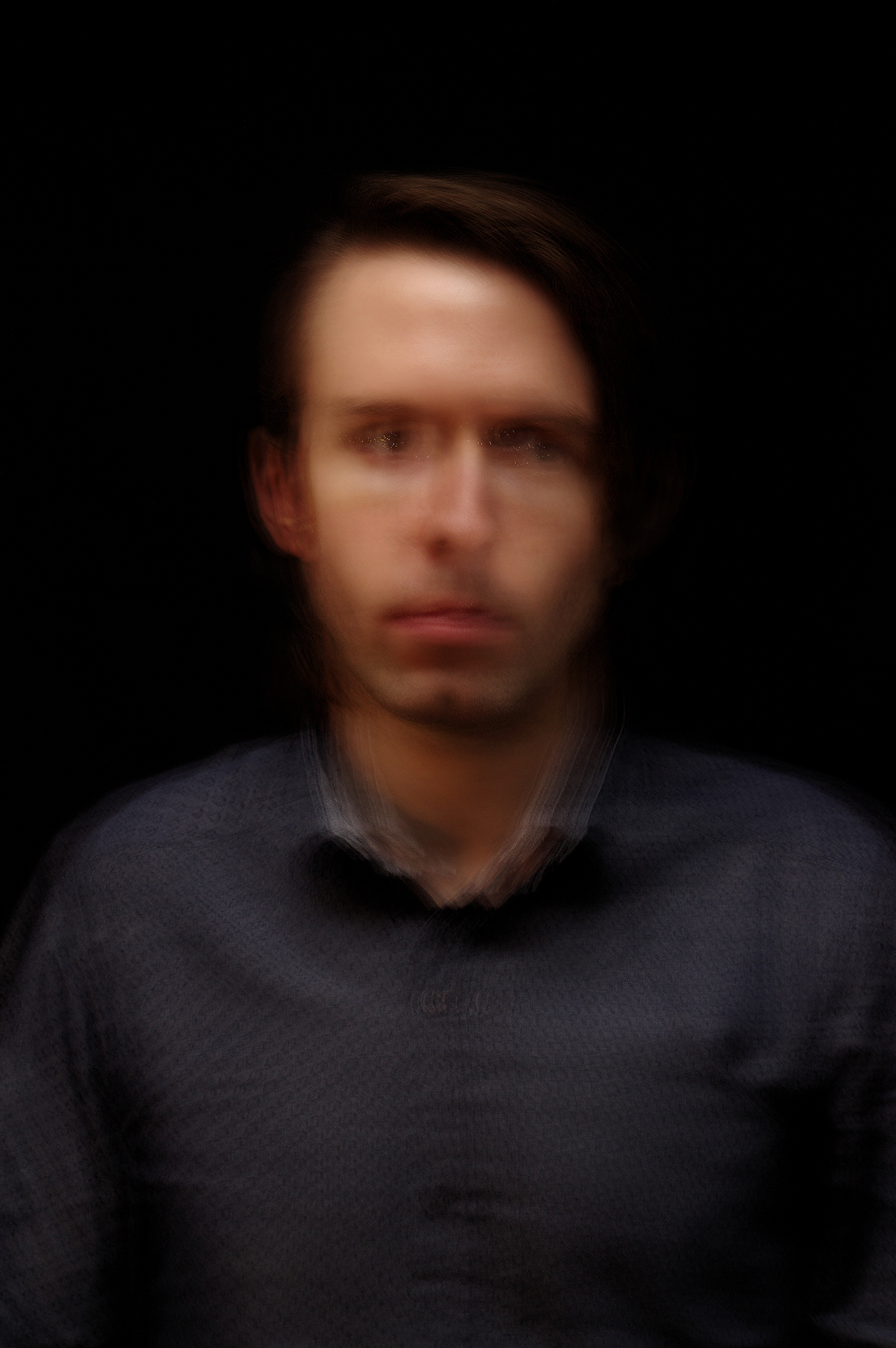 This project started out as a collaboration with Christian Donaghey from Autumns before becoming a solo project, and now has expanded again with the addition of Sam Goodwin on bass at live shows. Do you expect the live setup will continue to expand and alter, or do you prefer things to stay somewhat stable? I like the idea of the live set-up changing, though I’d be open to working with someone as a full member again. It’s just I can be a little dictatorial. I’d been getting tired of doing the live stuff that I had been doing with backing tracks, and for Culture Night in Belfast in September I roped Sam, who was also in the original Charles Hurts lineup, in on bass. That was the most fully live show I’ve done as Gross Net and probably my favourite. I also like the idea that you could go to see me a month apart and the set or the personnel on stage could be quite different. I’m not one for repeating myself and I get bored very easily. I think ideally I’d have three people on stage maybe, but playing alone or as a two piece reduces the overheads significantly.

Money is a recurring theme in your titles and indeed the project name. Would you say the global economic and political situation is a driving force behind the music? Of course, and that is very much deliberate. I feel we’re living in this world where focus is constantly shifted towards bullshit that isn’t important. By and large the reason for that is economic – to drive sales and the acquisition of wealth. Even in music this happens, labels regurgitating the same old shit hoping it’ll sell, or when you see the poster for some shows there’s a giant logo of the sponsor at the top and the act’s name in smaller font below. One wonders who’s supporting who. Sometimes I’ve felt like a salesman at certain gigs or festivals. I’m selling a lifestyle on one level, and the sponsored product on the other. I’ve done video interviews where afterwards I’m told, “That was great, but could you do it again exactly the same and mention the sponsor at the start?” There’s nothing more ridiculous than when I see bands and fans thinking they’re somehow counter-cultural by spending loads of money to drag their white middle class arses to shows to see other white middle class lads. Then they’ll sing a fucking love song or something. The thing is, I’m fully aware that I’m still contradictory. Hypocritical even. I am aware of that fact though, and that’s partly the idea of Gross Net. That hypocrisy of being part of the machine that you’re shouting out against, but we’re all complicit in that. You buy some fruit at a supermarket and you’re inadvertently funding some sort of genocide that you’re probably outspoken against.

Do you find it difficult to balance a solo project with a band or do you generally have enough downtime between Girls Names tours to concentrate on your own work? People always think I’m at home maybe five days over the year with Girls Names, that I must be so busy. It’s not quite like that. I work hard and can fit a lot into a short space of time. Also, this album was wrapped up in early January during the Christmas holidays, at least as far as recording was concerned. I’ve actually done relatively little since then anyway. Besides, where there’s a will there’s a way, and I’ve the fucking will.

In regards to both bands, do you feel there’s a difference in how your music is received in Berlin and mainland Europe generally, compared with closer to home? By and large we’re better received in Europe than we are closer to home. I’d even go as far as saying it’s at home that we’re received the worst. There’s more of a sense at home that something lacks worth if it doesn’t fit into a certain pop/rock/punk/dance vernacular. That it can’t be good if it’s not easily definable. Then you’ve the people who chastise you for what you’ve done saying things like, “Oh you think you’re so smart.” Or, “Oh you think you’re so cool,” or whatever. You can take a look at the poor level of arts funding at home and that way of thinking starts to make sense. In Germany, Europe, and elsewhere there is funding for arts organisations and artists and there’s an audience there who appreciate them. All of the worst shows I’ve ever played have been in the UK, and it’s something I’ve joked about with other bands I’ve met on the road who all dread playing there. For Girls Names at least, the UK hasn’t been too unkind in the last 18 months so hopefully that trend continues.

Finally, what are your plans beyond this tour and album? Do you envisage Gross Net as a long term project? I hope to tour again, maybe in the early months of next year before I imagine I’ll be dedicating more time to Girls Names again. I also have ideas for a new album, and it’s going to be quite different. Quite warped. I don’t want to stand in the same place too long, and I aim to try and break new ground or at least get to a place where the specific genre of what I do is harder to define. I abhor genre in the same way I abhor the labelling of one’s sexuality or race or gender and feel such language acts more like a separator rather than a unifier. I’m totally against musical homogeneity though, maybe I’ll get to a stage where I can describe my output as ‘non-homogenous’ music.

Quantitative Easing is out on November 25th on Touch Sensitive Records.