Ducks! Things That Were Lost track-by-track

A sneak preview of their brand new album 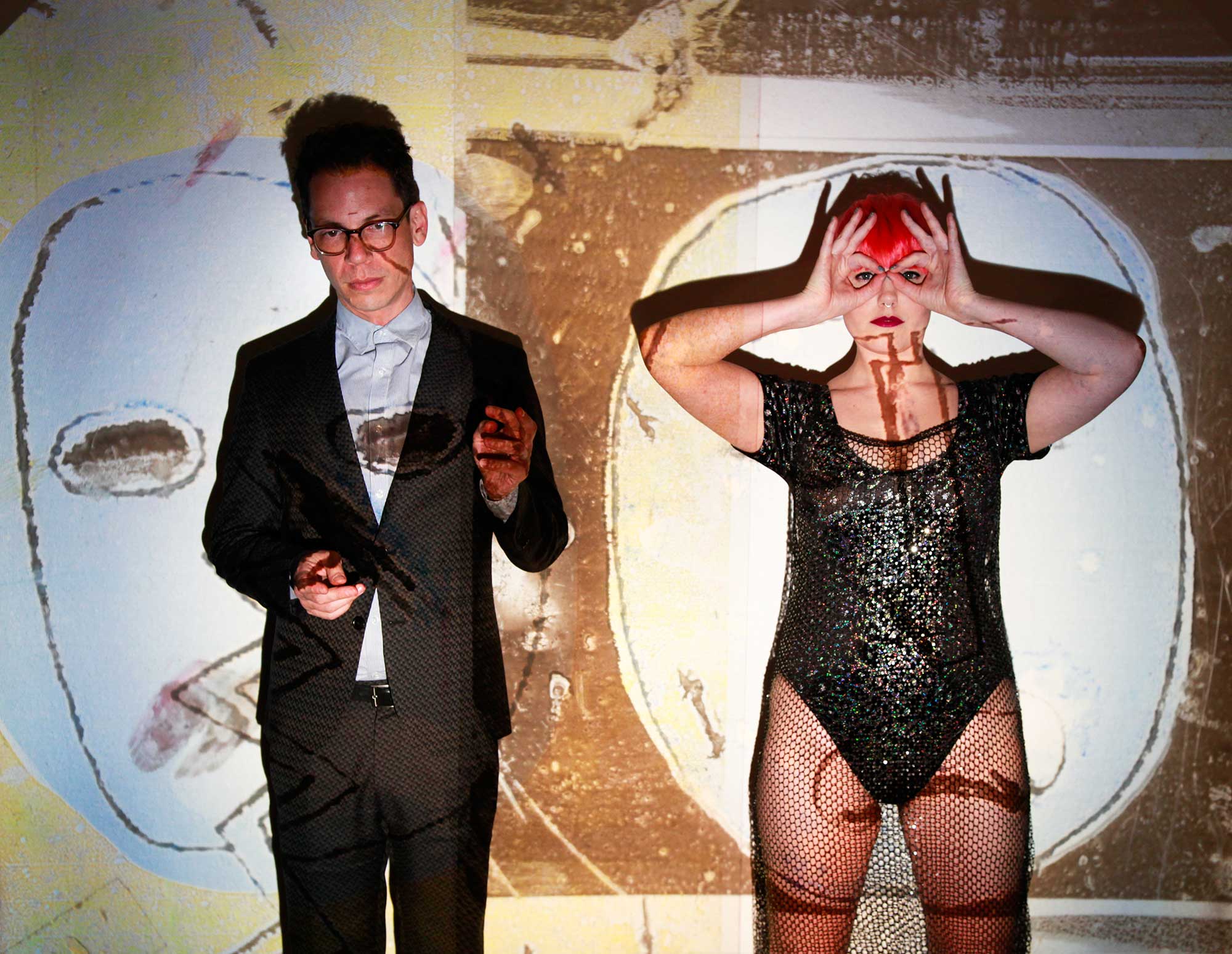 Ducks!, the Australian dream-disco duo based in Berlin, are a LOLA favourite. This week we’re celebrating the release of their third album Things That Were Lost at a full-blown party at Monarch. To give us a taste of what is in store, we got them to give a rundown of the record, track-by-track.

As avid found-sound re-purposers and archivers, Lani Bagley and Craig Schüftan have built up a sonic wonderland that spans time and space. Craig elaborates: “The whole idea of found sounds is obviously a really important thing in this record. Things that are in our personal archive that we’ve dug up and repurposed, sounds that have come from places, flea markets markets or forest walks, springs and toy drum kits.”

It was recorded in as far flung places as Malta, Australia, Belgium, Spain and Sweden, and features a host of different guests and players. Songwriter and producer Ivy Rossiter (Luckless / Yvois) sat down with the pair to ask them about the auditory treats to be found hidden (or not so hidden) throughout the record.

L: ‘Cut and Run’ is a ‘shedding skin’ song. It’s about being done with writing about an old shitty relationship. It was made at Schmiede [an artist’s residency in Hallein, Austria, in an abandoned Salt Mine]. We went to Schmiede when we were both really stressed and we both felt like we should be doing other things, but we wrote really happy things, party music. 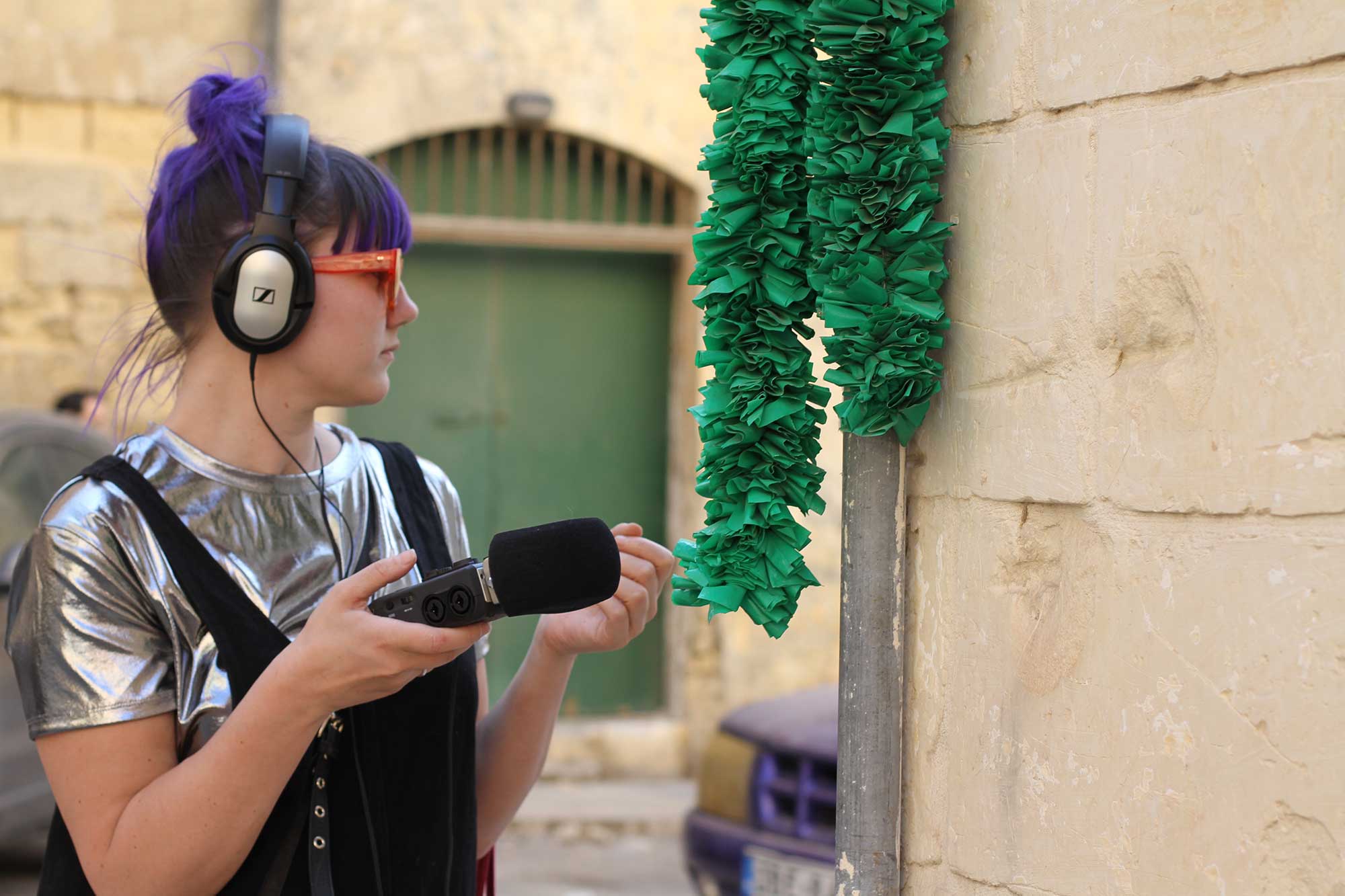 L: At Schmiede every year they have a battle of crappy robots where the robots try to push each other, sumo style, off a platform. The voices in ‘321 Fight’ are the announcers of the robot battle.

C: It was super electric in more ways than one, so I made a recording with my iPhone to capture some of the atmosphere.

C: This one is a bit of a travelogue; the sounds in that track are like a little tour around [Valetta, Malta]. The percussion in the motif that goes all the way through is us hitting the old metal gate at the bottom of the stairwell of the house with a fork… but then the sounds in that track sort of leave the house and go for a walk. There are sounds of cutlery and glasses and plates and things in a café…

L: We poured lemonade and then stuck the microphone in the glass so you can hear all the little bubbles.

C: There’s a section in the middle where you can hear a lot of detuned percussion, we stuck some microphones down some drains and drainpipes.

L: There’s a cannon in ‘Lung’, every day they let off a cannon in the park. My favourite thing about the cannon recording is that you hear a bang, and then a lady going ‘oh golly gosh!’

L: We went to a photography exhibition at the postal museum in Valetta, and these dancers were doing a performance that night. They had very quiet minimal music, so you could hear all their movements as they danced, you could hear their feet on the floor and their clothes moving. We invited them to come down to the gallery, they ended up singing in it, doing lots of things with their glasses, whacking the furniture.

C: One of the very first recordings that I made is on ‘Shady Drawers’. The first day that I ever thought about recording anything at all was the day that my parents moved out of the house that I grew up in in Sydney. They had a garage sale, and there was a reel to reel tape recorder. I made my first tape loop that day, so you can hear a voice in the middle 8 of that song – it’s actually my dad, when he was learning to be a taxi driver in 1972. He’d made a recording of himself reading the road rules. Before I was born.

I love that time travel thing that you can do with electronic recording. You can put two places together, or two times together, us having a jam in our living room and my dad speaking into a tape recorder in 1972.

L: There’s also a recording that I took with my phone in Teufelsberg, in the top of the big dome, cause its got such amazing natural reverb in there. It’s me whistling, and you can hear people dropping bottles and stuff.

C: And I recorded a busker playing the saxophone in Moritzplatz.

L: the saxophone and the whistles from Teufelsberg are so perfect together.

C: It shouldn’t work, but it really does. 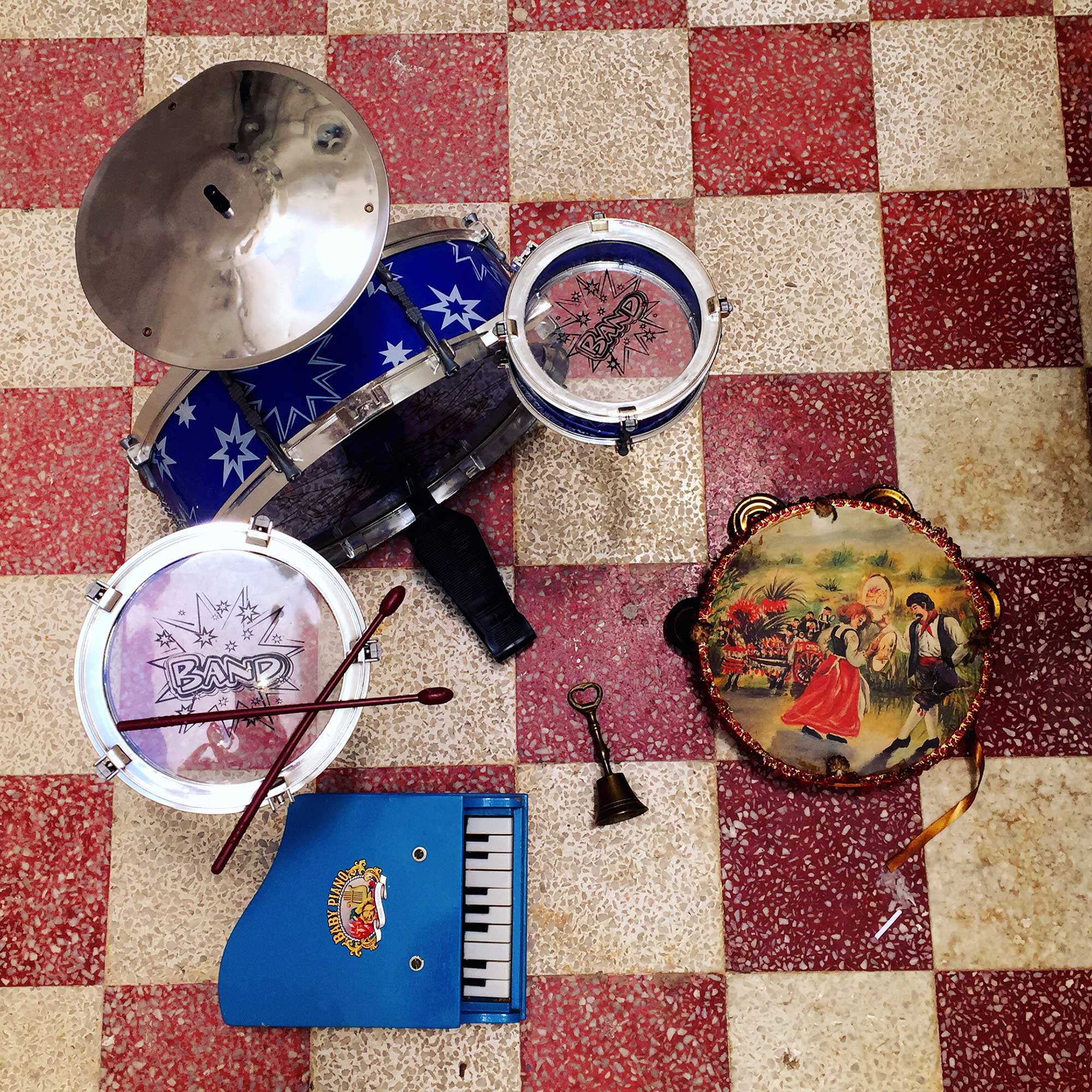 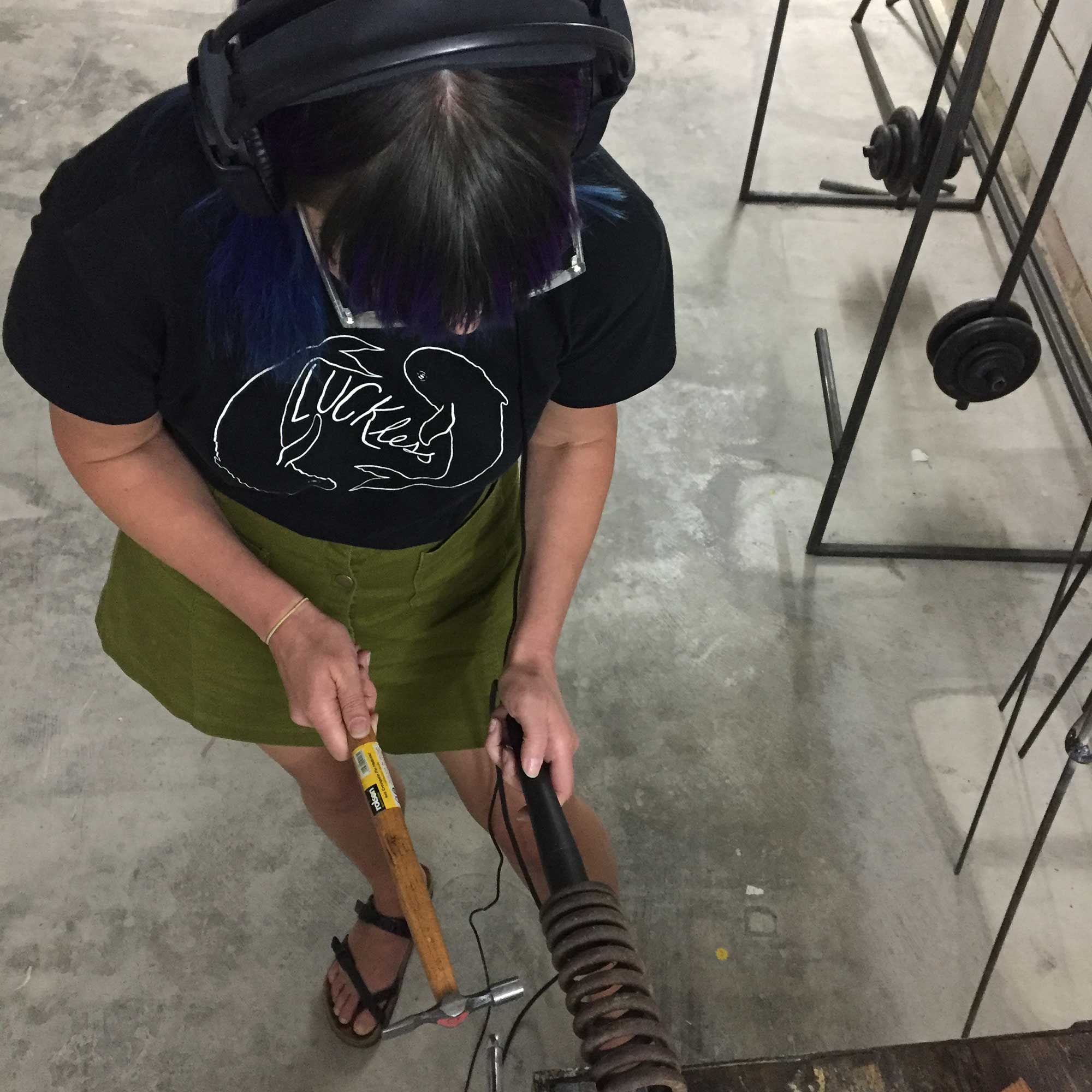 C: The shouty backing vocals that you and Marissa [Lani’s sister] did for ‘Delivery’… there’s just so much joy in you two doing these silly voices and making up this choir of imaginary people. It’s just a fun silly party song, but I find myself getting a little bit teary in that part.

L: That moment meant a lot to me.

C: It’s art and life all mixed up.

L: We hosted a workshop in Malta and we asked everyone to bring a sound with them. Fran gave us an ambulance…

C: there’s some birds, some canaries… a woman named Rachelle Deguara made lots of recordings plunging her hands into plastic beads… The session itself was insane, it was some of the most intense racket I’ve ever heard.

L: When we got to Blitz, before we even unpacked our clothes, we walked around with the field recorder, tapping on all the things in the building, running sticks along the railing rungs. The song is based around a sample of a wine glass in the bar, which I think we started repitching that day.

C: You know the way that ‘Swerve’ ends with Lani singing ‘Complete’ in this slightly strange meter, and it sounds very echoey and roomy… that was one of the first experiments too. We recorded you singing that line, then played it out into the space and recorded it again, and then played the recording of the space and recorded that again until it was totally destroyed, so there’s a few different iterations of that.

L: I was so sick, I sound really husky and weird at the end of that because I was on death’s door.

C: We listened to a loop together for a long time and encouraged everyone to sing or speak the sounds that they thought were there, that’s what all these people are doing, they’re saying or singing what they think is in the sound.

L: We had a room full of wonderful weirdos who were ready to say strange shit. ‘A sexy blonde talks about a white horse in a bathtub’ was Sarianna Pylkännen, one of two Finnish sisters who were there. It’s Finnish, Maltese, Australian accents, and from the ‘Kept at Bay’ session we borrowed Claus Folden saying ‘Robot’, but we just use the second part, so it just sounds like he’s saying ‘Butt’…

C: We ended a strange montage of people saying weird things that didn’t make any particular sense in no rhythm or meter, this super odd sound experiment that later became a banger. I don’t think anyone would have expected on that day that this is what we would’ve ended up doing with it.

L: I think that the words lent themselves to a bit of mutant disco weirdness. 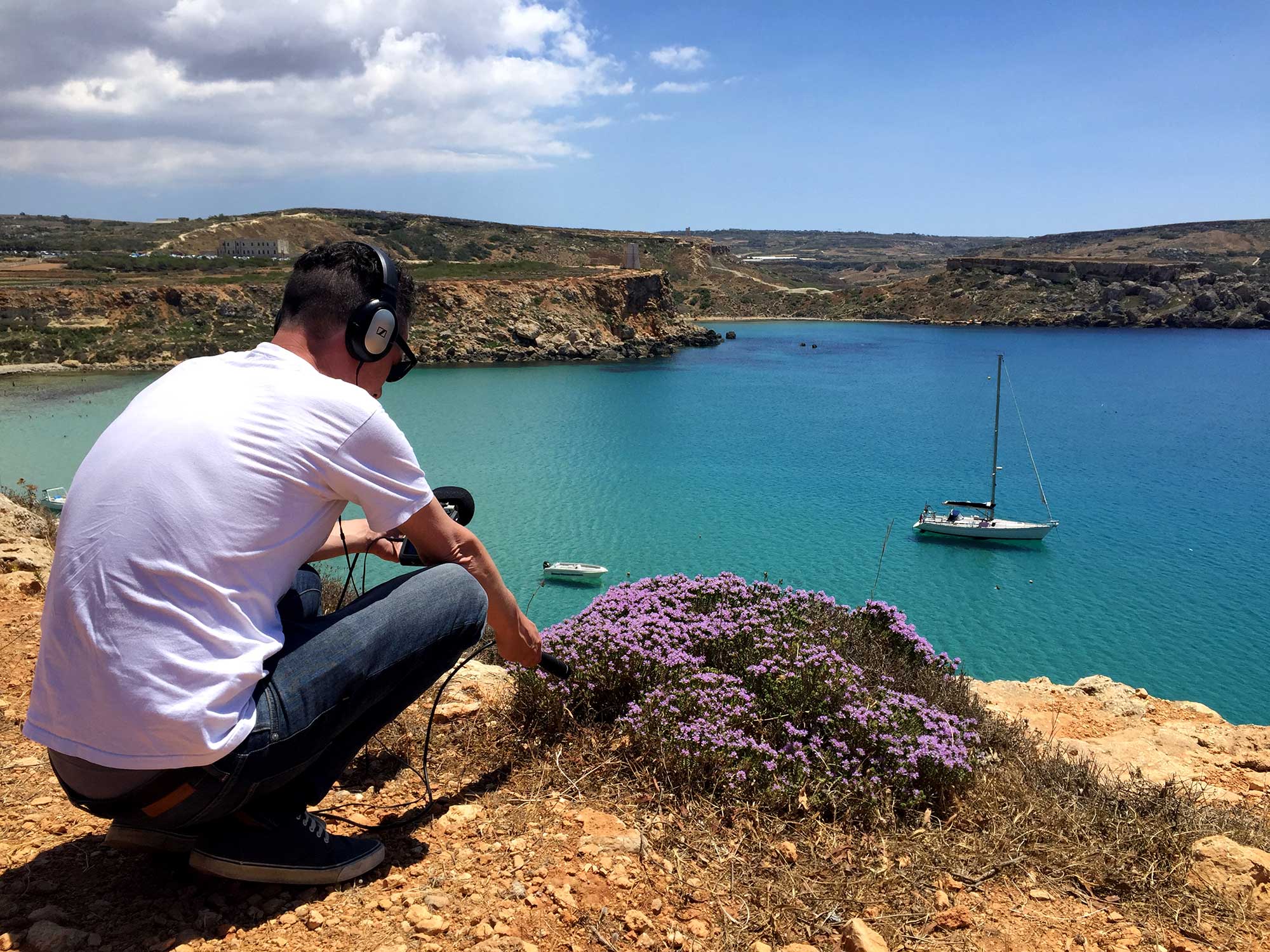 Craig sticking his mic into a bush of bees

L: We were trying to find this bird called the Merill – the bird doesn’t feature cause we didn’t find it. That whole day was concocted as an excuse for me to go to the beach, and we found and stuck a microphone into a bush full of bees. That’s honestly I think the happiest that I’ve ever seen you, sticking a microphone into a bush of bees. You just had this smile on your face, and it was the sweetest thing.

C: I just couldn’t believe my luck! It was amazing!

L: Matyou Galea is a sound sculptor, he makes all these crazy sculptures that also make noises, and we went to his studio to see his work. He had these huge springs, so you could put it in a clamp and hit it with a hammer and put the microphone right inside the spring.

C: The drone that plays all through ‘Il-Merill’ is basically inside the spring. It was a nice place to be.

L: It’s so good inside a spring.

C: you looked so happy with the headphones on.

C: And there’s this recording of Lani sound-checking. She was using the looper, singing something, and then adding something to that, and adding something to that, building up a harmony in this little improvised piece of music while she was testing the sound in the space. It’s a sneaky recording, I had my field recorder there and I was up the other end of the hall recording it while she was doing it… It’s a very candid moment. I really like how public, and private it is. You’re in this big space and its sounds like you’re giving a concert, but actually you’re just performing for you. I think that’s really beautiful somehow. 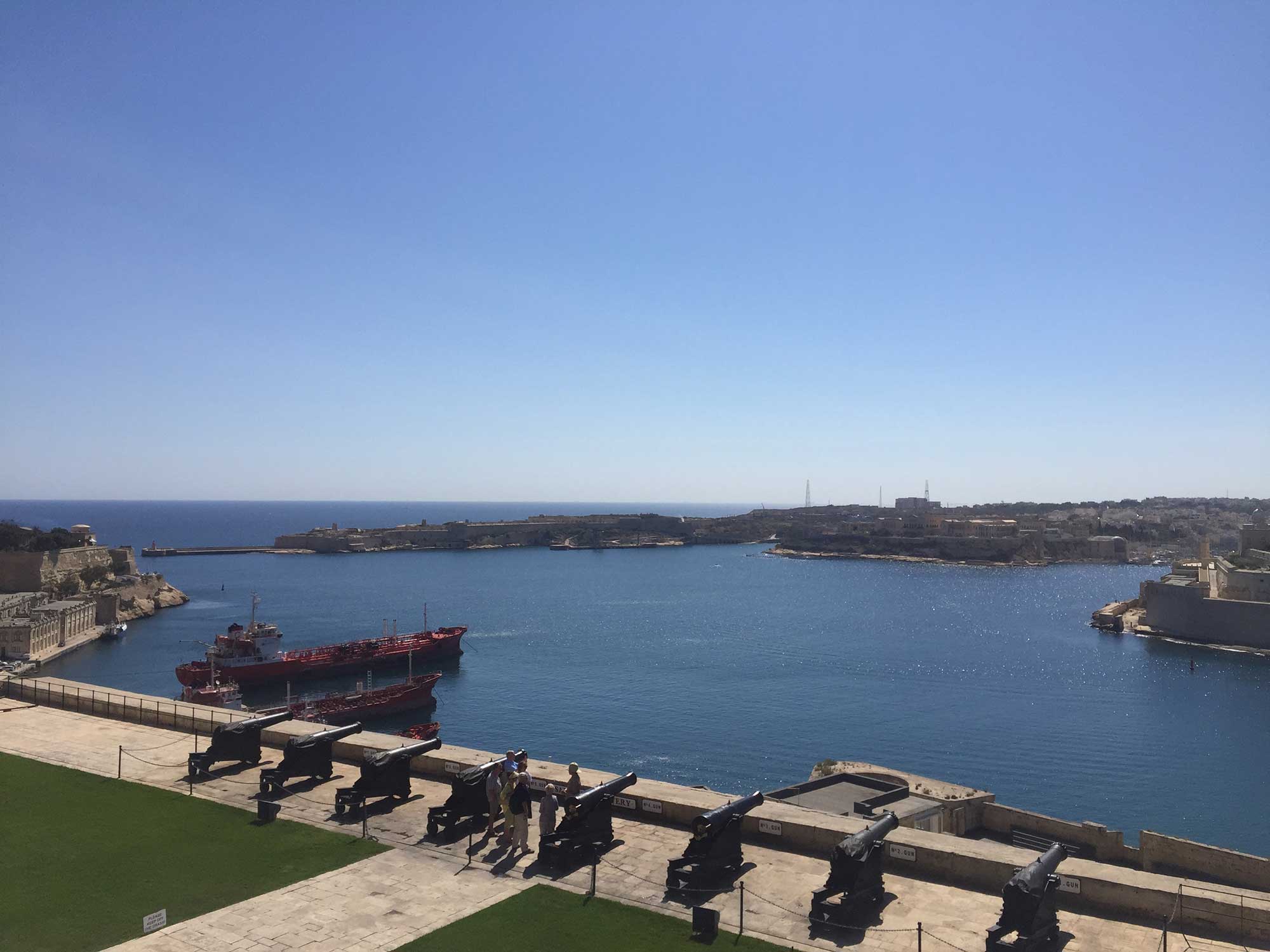 The cannons that can be heard on 'Lung'

C: Our Snappy Dinosaur toy is kind of a magic sound for me at this point. It’s on the final track, ‘Minds Have Changed…’  Snappy Dinosaur lends a bit of toytown charm to wherever it appears. It’s a little humble sound, it has for me a little bit of the world of childhood, of small sounds and plastic things laying around, rattle or snap or whatever.

We will use whatever we have and we’ll use it over and over again.  I think when you use something and then you keep using it, and keep using it… it’s a way of insisting on it. After a while it becomes familiar, it becomes part of our world, it’s like our menagerie. The more we use them, the more meaningful they become.

L: I think our songs sound playful because we are playing when we make them. It’s like kids running around the house and grabbing things that will make a noise, which lends itself to making playful music.

C: When you’re using little bits and pieces from your life, it’s almost like the photographs in your scrapbook become part of the art that you’re making. I have to trust that some that enthusiasm or the feeling behind it comes across to other people. I don’t really know.

At a certain point you can’t tell any more, there’s a lot of emotional reasons why you love the parts of it that will be invisible or inaudible to anyone else. On a purely selfish level I love that this album is a kind of a travelogue, it’s like a remixed record of two years of adventures.

L: I love that we got to fit so many people that we love in it, you know?

See Ducks! live on Friday March 29 at Monarch, and keep in touch with all their other happenings via ducksmakemusic.com. 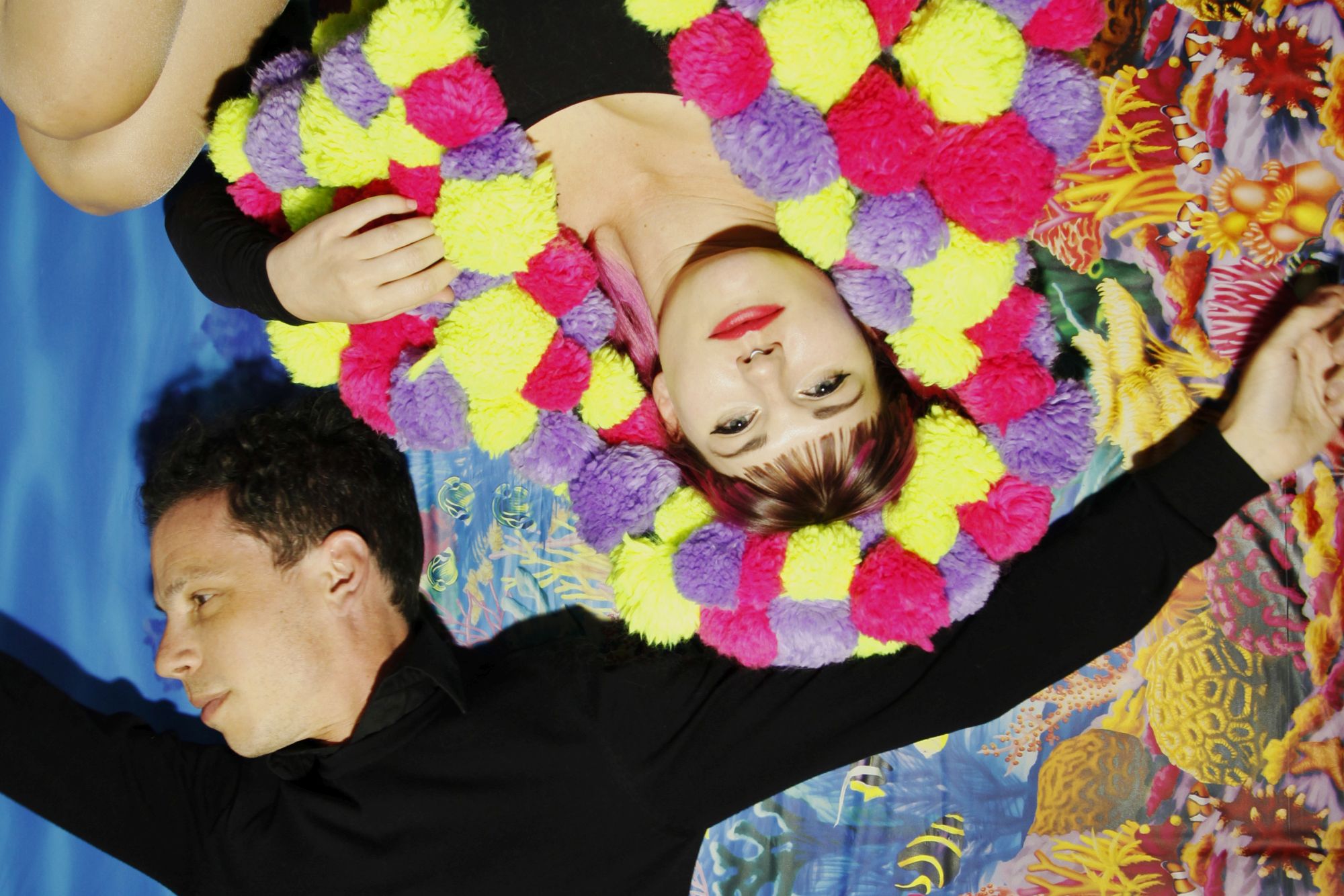