Davide Lace is dancing with chaos in Berlin 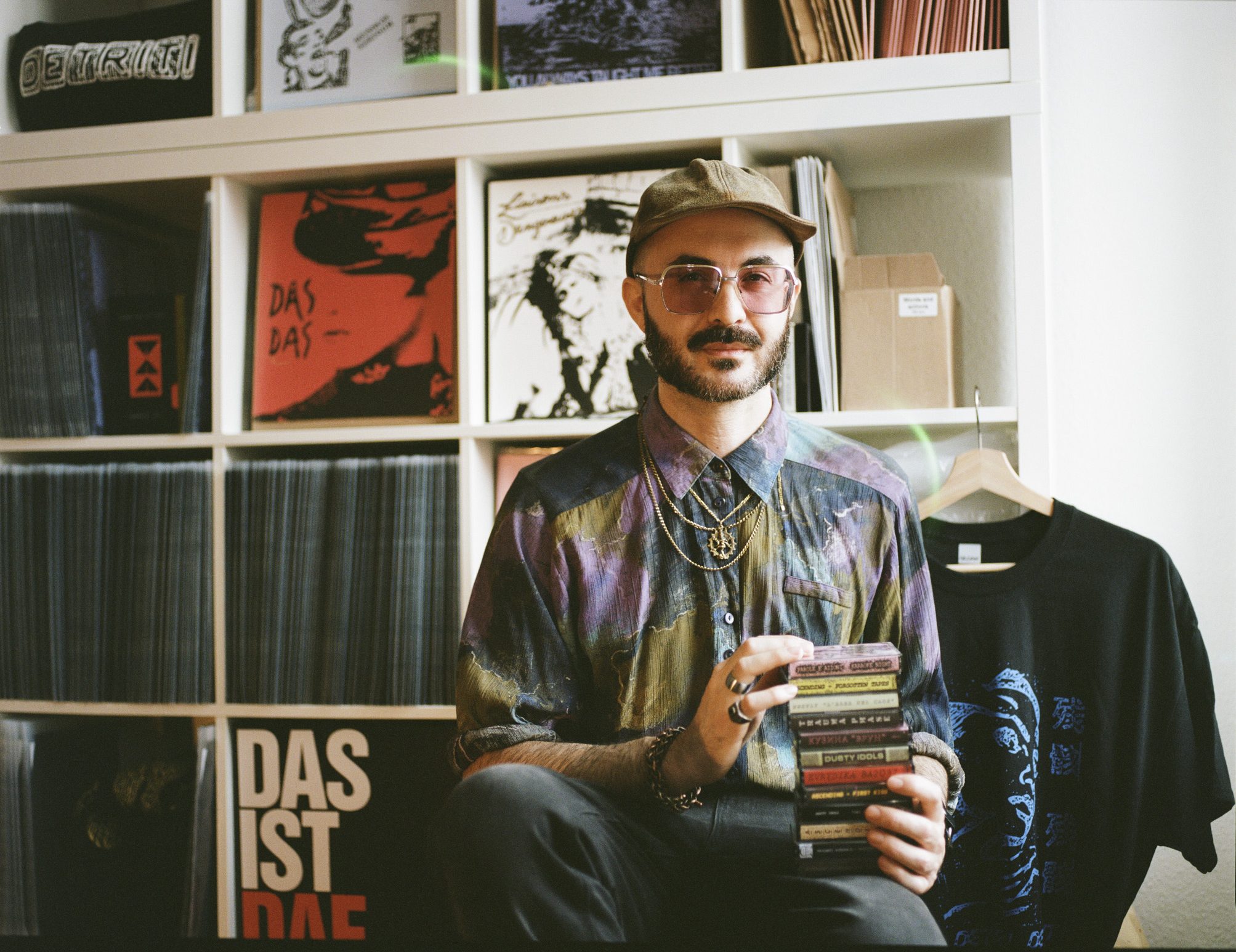 The Detriti Records mission is simple: create for the sake of creativity, while discovering and promoting musical artists who share the same ideals. Label head Davide La Cecillia, a.k.a. Davide Lace, talks us through his influences, how he found himself in Berlin, and what it takes to run a record label in these times.

When looking at the roster of Detriti Records, you instinctively feel the bands are handpicked for their sound rather than for marketability, projected popularity, or any other profit-driven incentives. Davide is clearly ambitious and determined, holding a clear vision of what he wants to achieve and represent.

In biology, detritus is dead organic material, waste, or debris that usually includes the bodies or fragments of bodies, dead organisms, and fecal material. But it also hosts communities of microorganisms that colonize and decompose it – a burst of life that springs from deadness and decay.

Maybe a strange term to associate your life’s work with, but in the case of Davide and his label, the life-from-death metaphor works. The sounds and visuals that make the label stand out are instantly recognisable, and the label’s aesthetics-of-the-ugly association suggests that Davide started it all as an escape into music. A passionate artist-entrepreneur, music-maker, and music-marketer, Davide puts a high level of effort into the details he crafts, using his own style, sense of aesthetics, and sharp ear.

Davide’s creative choices also transfer through to his own musical success. Aside from running Detriti Records, he still performs with his own groups, Words And Actions and Dusty Idols. He spends his time curating, performing, discovering, and promoting bands from all over the world, sometimes from countries some of us can’t point to on a map. But there are also projects from his newfound hometown, Berlin, on Detriti Records.

Berlin is a city for people who want to dance with chaos. 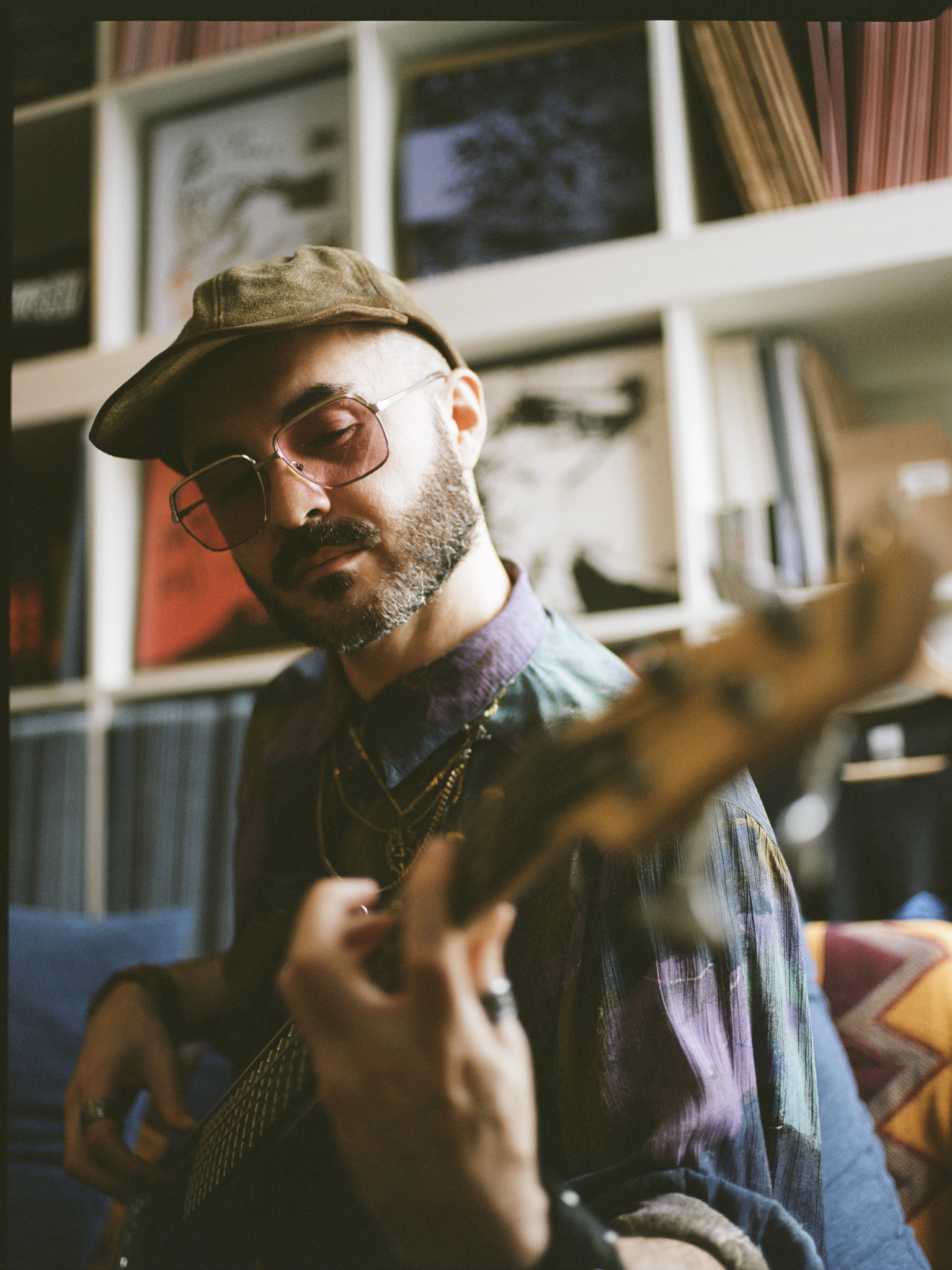 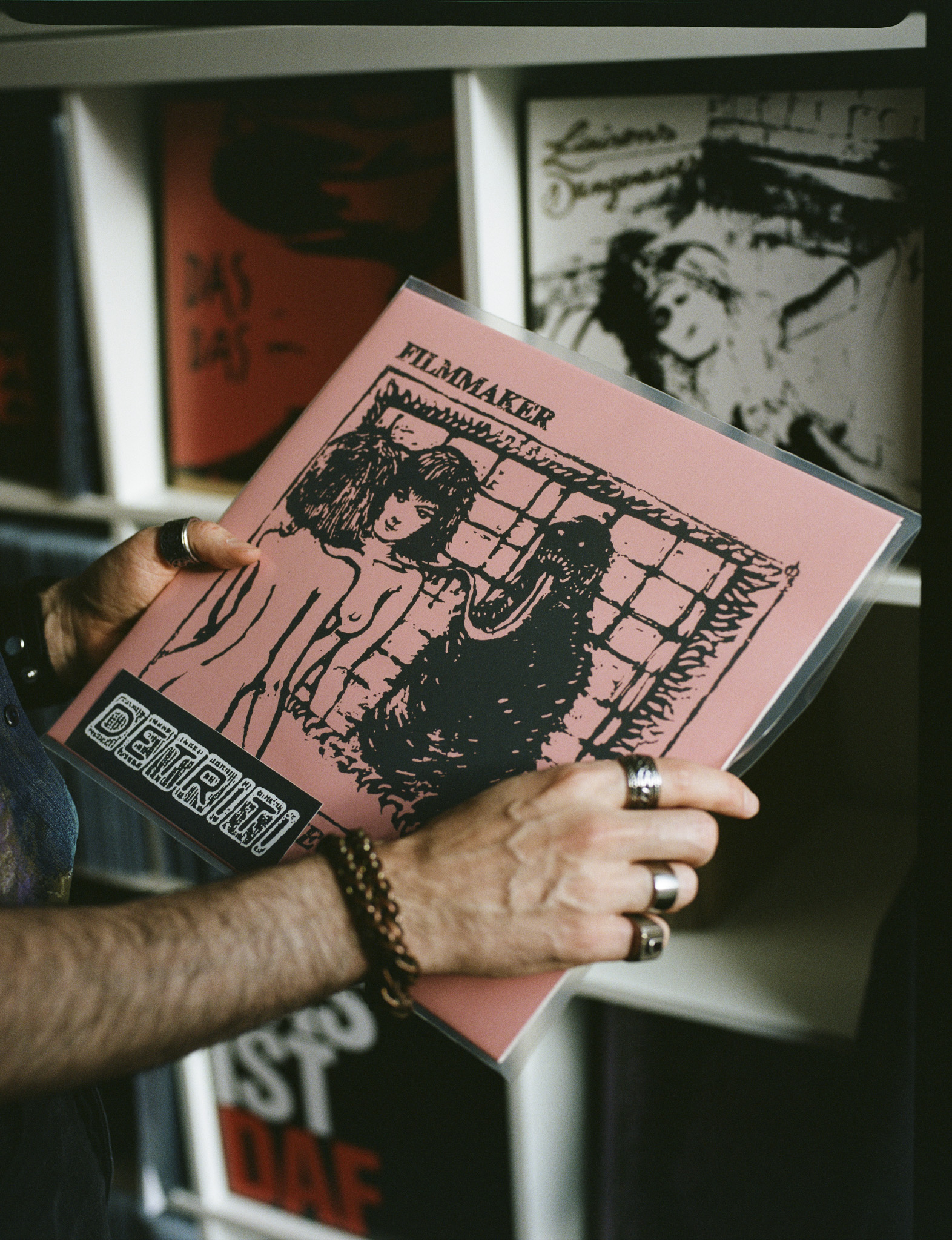 Davide is originally from northern Italy, and although he fondly remembers the navigli in Milano and the narrow alleyways of Genova, something pushed him to set sails for new, more complex shores. It’s easy to imagine Davide being drawn to Berlin for its innovative, pioneering sounds,  given his label’s prolific catalog. The raw, disruptive, youthful energy that surrounds Detriti Records harks back to the Geniale Dilletanten festival celebrating German art punk bands, or the synth-pop and post-punk sound of the Neue Deutsche Welle.

When asked about the influences of his own taste and sound, Davide’s list is unsurprisingly filled with German electro-punk and Neue Deutsche Welle innovators like Deutsch Amerikanische Freundschaft, Gundrun Gut’s band Malaria!, and Liaisons Dangereuses. But almost all of Davide’s favorites somehow seem to circulate around fellow musician and record producer, Mark Reeder. In fact, Davide points to Mark’s wide-reaching influence as one of the inspirations for starting Detriti Records. “I’m a big fan of Mark Reeder, and his wonderful documentary, B-Movie, was one of the reasons I started my label, Detriti Records. Mark’s great idea was to record his life in real time, and that really inspired me.” Mark’s attitude and approach to music-making has clearly made a strong imprint on Davide, both creatively and artistically.

The philosophy behind Davide’s whole practice is to be open to newness – to allow for the birth of new, great music. He believes that,  “if people were more open and less conformist, good artists would emerge faster and more easily.” And this whole ethos seems to bleed into everything Davide does. From his sharp eye for new talent to his self-printed artwork, Davide refuses to conform.

The musical movements that influence Davide carry this same spirit, and this is perhaps why he is so determined to keep that spirit alive, despite operating in a time when production values seem to dictate record production and distribution. Davide thinks, “post-punk is and has been the most tolerant, open and welcoming subculture that has existed in the last 50 years, in a very natural and genuine way… We can also say music is probably the most unadulterated cultural production at the moment, even if we still have some gatekeeping issues.” And as a gatekeeper himself, Davide is finding ways to open those gates up to those ready to step inside his detritus-filled world.

Berlin’s musical history certainly played a role in Davide finding his own sound, aesthetic, and philosophy, but the draw to stay here was more than that. “Berlin is a city for people who want to dance with chaos. It can be both extremely dangerous and life-saving at the same time. I founded Detriti Records here when I realized this was the only way to give meaning to my life.” And so, in true detritus fashion, a story grounded in chaos began. 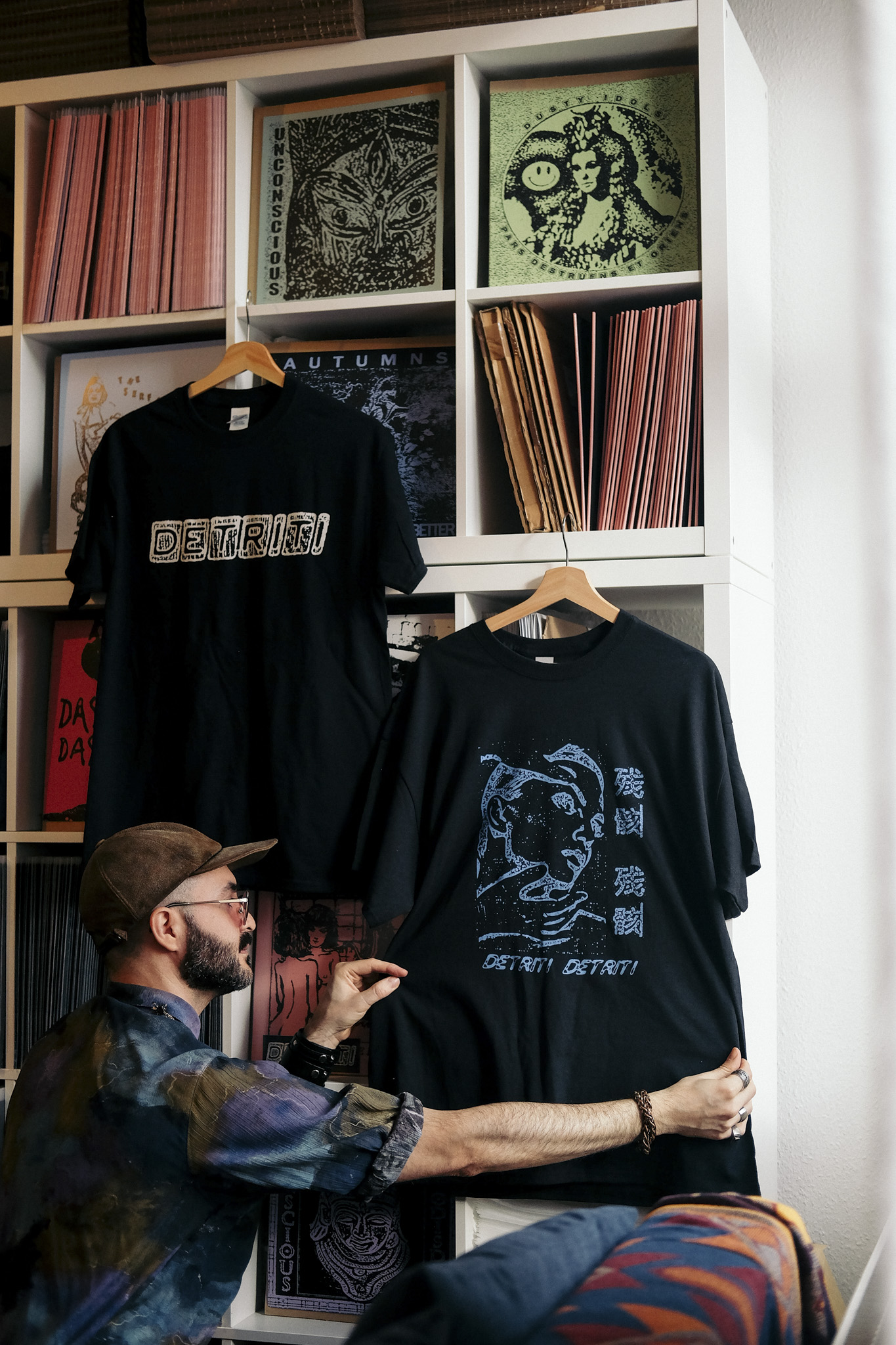 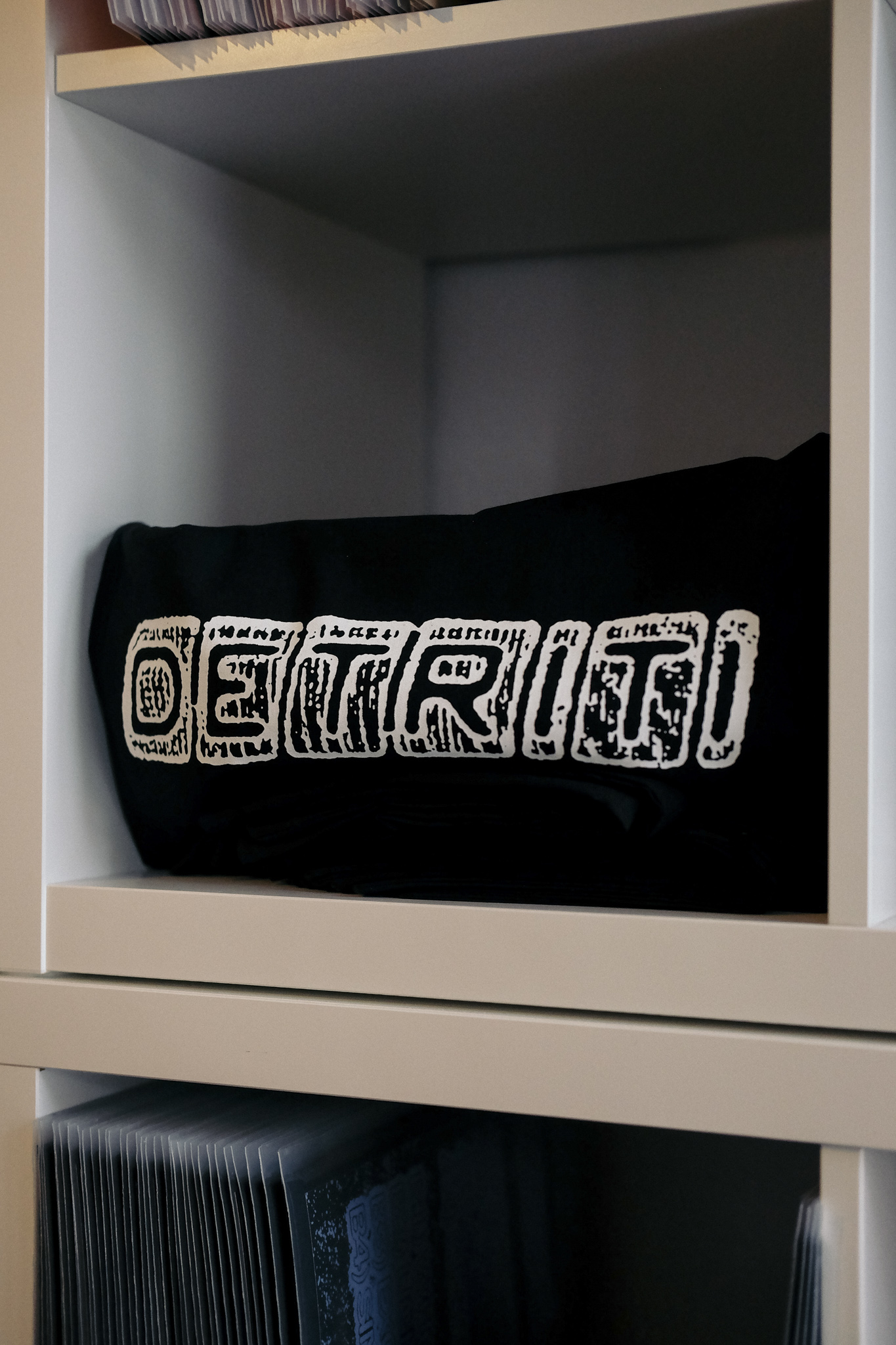 From his home in Friedrichsfelde in Berlin, Davide spends his days connecting, collaborating, and promoting to put bands from all over the world into the public eye. He loves to dig deep, always searching for newness. “About discovering new music: every week I try to spend 5-6 hours looking for new artists on online forums and communities. And I listen to all the demos we receive.” Standing in front of his kallax shelf full of records, Davide looks like a proud collector, but it’s clear upon further inspection that he is also a modern-day post-punk entrepreneur.

The beginning of Davide’s musical career can be traced back to 2011 when he self-released his own band, Words and Actions’, first cassette, Life of Farewells. From then on, he was determined to become more than a musician, so he transformed into a label owner, graphic designer, music promoter, and videographer. A rock-solid work ethic and large breadth of skills has steered Davide and his label towards success.

Aside from organising releases, Detriti Records also regularly puts out compilations. Davide views them as portraits of his label’s brand, an archiving of the music that makes the label so unique. “I would say these compilations are like photographs of a possibility – also a document for the future.” An important side to the label is making sure the sound stays new, varied, but in-line with all of the influences Davide and Detriti Records have always incorporated into it.

Davide also believes that the aesthetic of the label is almost as important as the sound. There are many influences that come together to form the Detriti Records sound – post-punk, synth-rock, deathrock, coldwave, EBM, house, techno, industrial, ambient, abstract, and lo-fi – so it’s a tall order to combine all of these elements into a coherent audio-visual whole.

Davide, once again, turns to inspiration from past movements that have inspired him. He says, “The main source of inspiration for my label’s art are the Big City Orchestra cassettes that had great album covers in the late 70s and 80s… VHS aesthetics is definitely the video equivalent of my xeroxed graphics: vintage, raw, minimalist, enigmatic.” Placing such a strong emphasis on the visual side of the label makes sense – a raw, vintage feel of the music is echoed in the imagery.

I think that big success is reached thanks to radicalism, a visionary attitude and unavailability to artistic compromises. 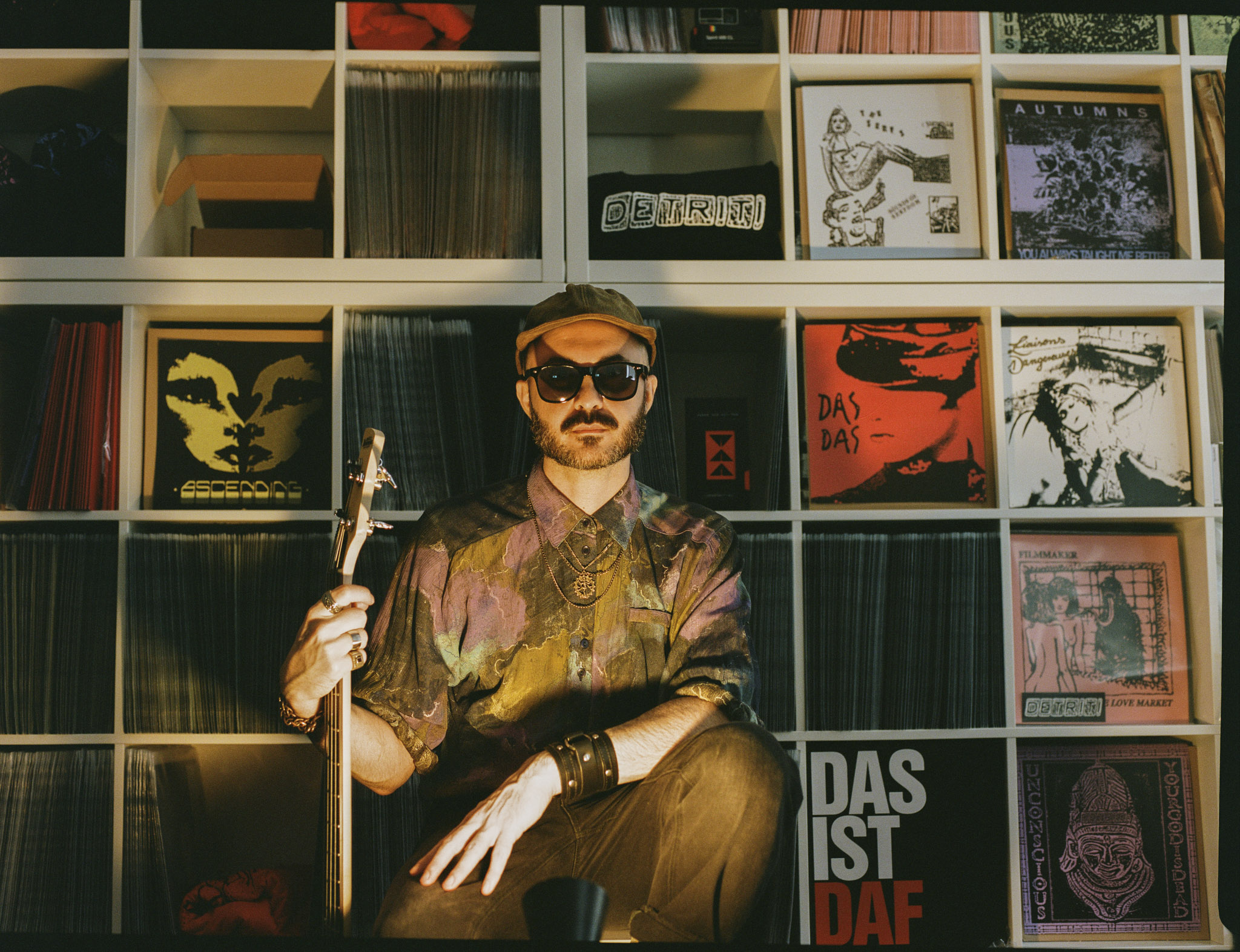 Not a lot of people can say that they notice potential superstars in the early phase of their career, but Davide’s constant digging led him to discover the now well-known Belarusian group, Molchat Doma. Championing minimalistic beats, bass, guitar, synths and vocals, Molchat Doma went viral last year. Their vinyl, тажи or Etazhi, was relaunched six times on Detriti due to an influx of requests. When talking about the fast-growing musical sensation, Davide says, “Since the beginning it was clear to me that they had the right skills and potential. When I was comparing them to the early New Order, I was totally serious.” Davide claims that going viral is always a combination of the same elements: music, graphics, and evocative potential.

The story of Molchat Doma doesn’t end there. Although there was a promising beginning, the group and Detriti Records have since drifted apart. Davide recalls, “step by step, things started to deteriorate. Later I found out they signed to Sacred Bones many months ago without informing me. So pretty obviously all of our communication became weird and out-of-tune. Not to mention the under-the-table repress of Etazhi – that was totally a low blow.” Despite the negative effect this had on Detriti Records, Davide remains as hard-working and determined as ever, seemingly unaffected by the complicated relationship with Molchat Doma, committed to supporting the artists on his label.

Davide continues working to help the groups under his direction meet their full potential. “One missing element can prevent the birth of a star. And not everything is in our control. But a good label should do this sort of ‘shamanic/obstetrical’ work, translating an unborn language into something that can be potentially digested and enjoyed by the audience in the best possible way… This is the meaning of my art direction for me.”

Pondering more about the meaning of success and what it means, the Italo-Berliner says, “I think that big success is reached thanks to radicalism, a visionary attitude and unavailability to artistic compromises… The point is that real success means to win with your own rules, pushing others to accept and use your rules and not the contrary. It’s not the easy path, but certainly the only one that can potentially change the world.” So Davide will keep on pushing his vision for the label, looking for success on his own terms.

There is a special energy in Detriti Records that makes its sound feel like science-fiction material for future generations, changing and morphing just like detritus, organically and patiently, pulsing to the beat of a special singular motion. It’s Berlin embracing the chaos it’s dancing with.

To find out more about Detriti records and Davide, visit www.detritirecords.shop 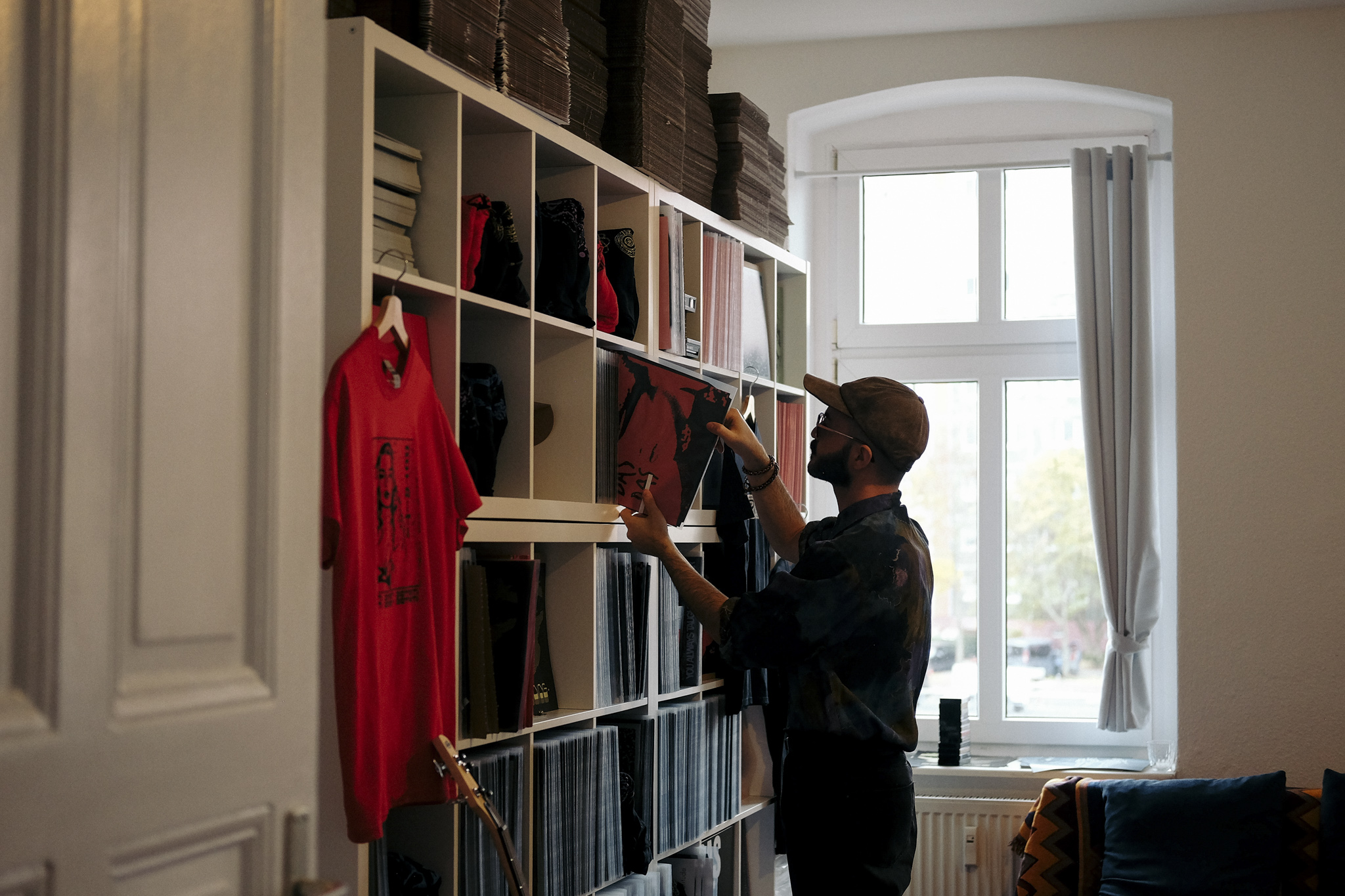