He’s the king of Köpenick, the west-coast-loving rapper in a Pippi Longstocking disguise.

Musically versatile and never too serious about labels, genres or even himself, Romano charmed his way into German hearts and is ready to conquer a few more with his new album, Copyshop. Here we talk to him about his music, Berlin and what it was like to see the GDR fall apart. 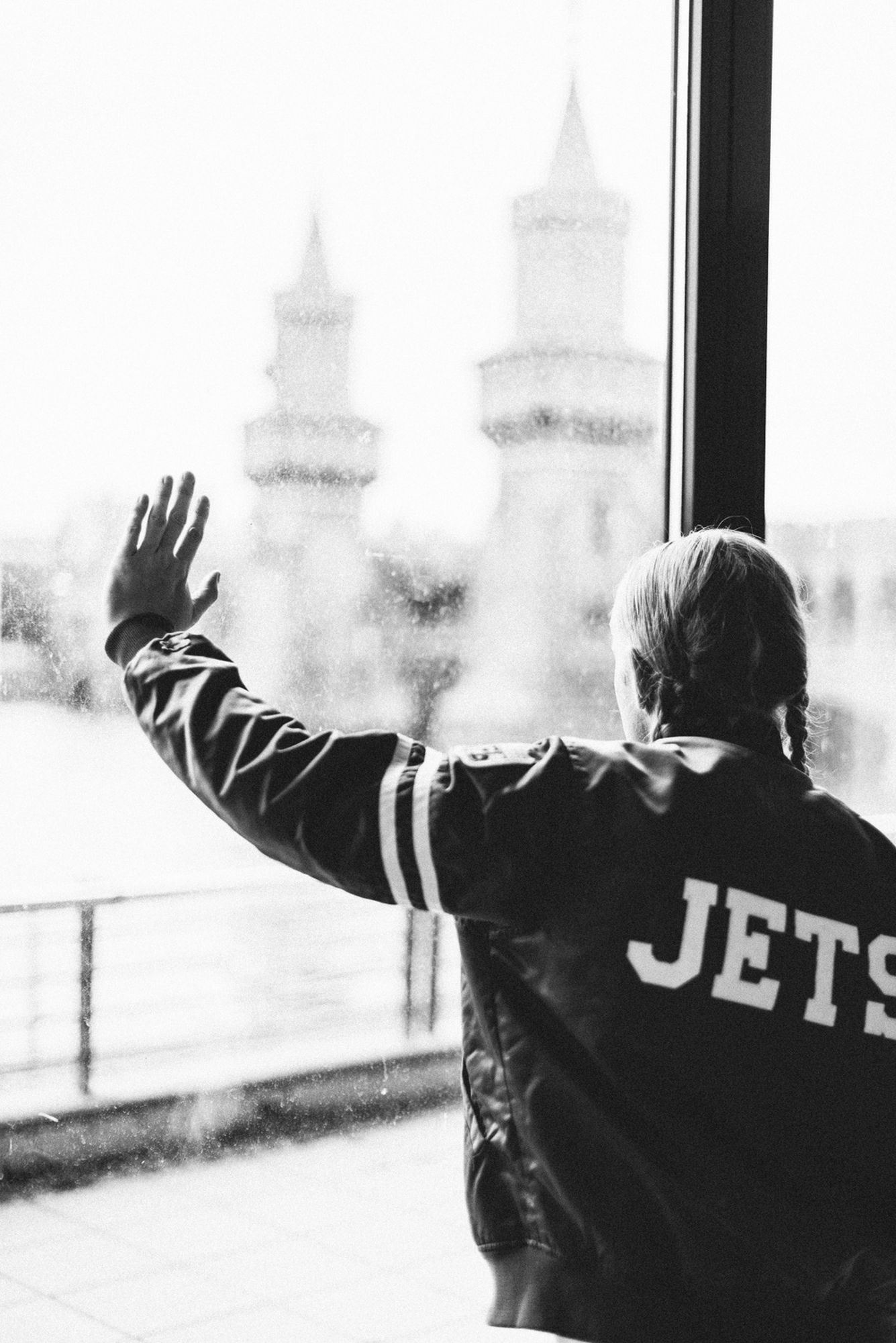 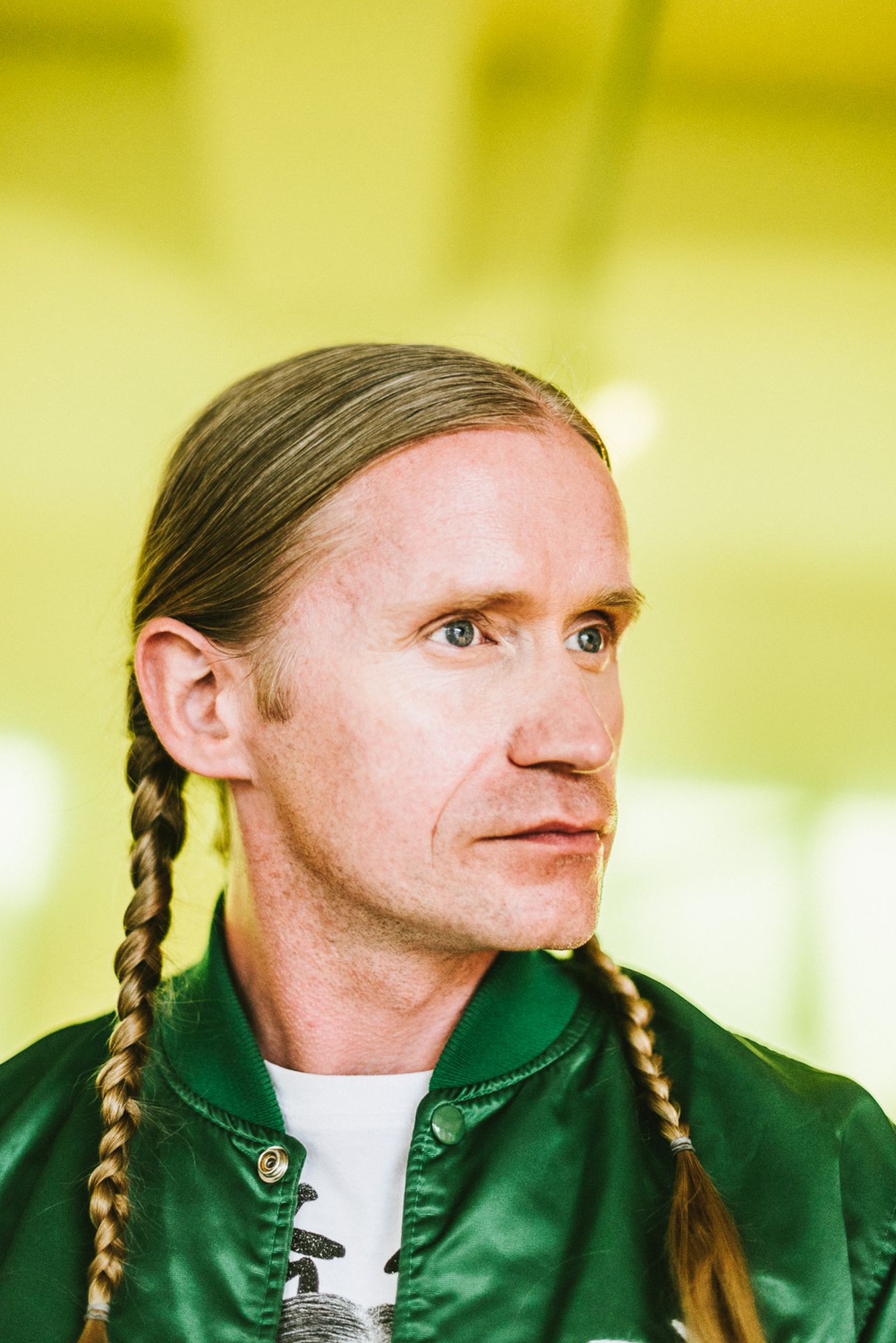 As Romano walks along the eighth- floor corridor of the Universal Music building, his pigtails bounce up and down against his shiny, green Jets jacket. It’s easy to be drawn into a conversation with him. Romano talks and jokes like a true Berliner, and spreads a positive, charming vibe that is highly contagious. As he offers us some coffee, the only drug he still allows himself, he recognises Moderat on the cover of LOLA issue four. “Szary and Gernot,” he smiles. “They are friends of mine! Both of them come from Woltersdorf, quite close to Köpenick.”

People define the value of things themselves and the value constantly changes. All of it is an illusion.

Köpenick is what Romano is best known for, or maybe it’s the other way around. As a real Berliner – born in Köpenick in 1977 as Roman Geike – he titled his second album Jenseits von Köpenick (Beyond Köpenick), a hilarious masterpiece that exists some-where between hip hop, electronica, pop and metal. Romano never liked to be tied down to one genre. At 15 he started to write rap lyrics, but after school he played in a metal band. He later turned to drum’n’bass, became part of the Hightek Crew, and contributed vocals for highly praised electronic acts like Siriusmo and Oliver Koletzki. His first record as Romano, Blumen für dich (Flowers for You), was a Schlager album. “What I love about this project is that all the small facets of what I did before always reappear in my current songs. I’m going to try to explain this in a picture: on the ocean there are ships, every ship is a different genre of music and a different size depending on how much time I invested in it. You have one for my metal band, a big drum’n’bass ship, a colourful Schlager ship, one that is electronic, and so on. All these ships go into one harbour. And this harbour is Romano.” 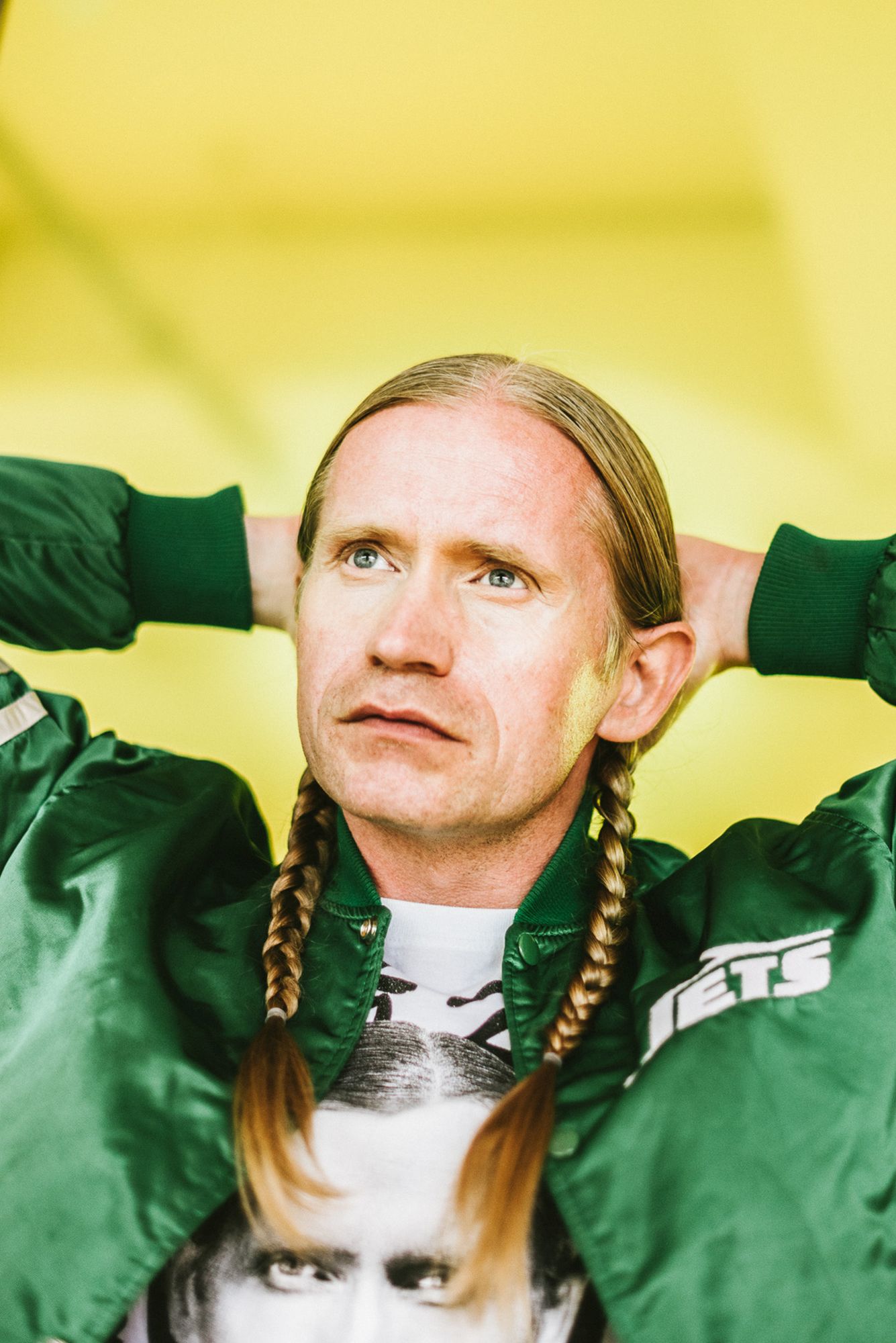 As a teenager when the Wall came down, Romano was clearly influenced by the artis- tic atmosphere of the capital after reunification. The ‘90s created a dense atmosphere of excitement and chaos; illegal clubs were established, new subcultures emerged, flats were occupied – Berlin was going through a radical change. “Creatively aggressive,” Romano calls it. “It was like a steam cooker under high pressure, and at some point the lid shoots off and everything comes out: the good, the bad, the creative. Everything.” He continues: “There were punks, hip hoppers, metallers, but you also had Nazis who began to do horrible things in Rostock and Hoyerswerda. That happens when you try to keep everything under control. At some point it breaks.”

Romano’s new album Copyshop is a satirical and acerbic portrait of German society with poppy, electronic party sounds that often belie its serious nature. The second track ‘König der Hunde’ (‘King of the Dogs’) is a reflection on the tumultuous time after socialism collapsed. “It felt like a freefall,” says Romano, who was about 12 years old when his hometown stopped being part of the socialist GDR and joined the Bundesrepublik Deutschland. “The fascinating thing is: maths keeps being maths, fractions keep being fractions. Today and back then, in every country around the world, science stays the same. But that’s not the case with history and politics. Things we learned about in the GDR were all of a sudden told from a completely different angle. History was turned upside down and we had to change our thinking from year one on.”

In ‘König der Hunde’, Romano captures the exciting and confusing spirit of the time: “Kein Bock auf Schule, hab den Durchblick verlor’n; Alte Lehrer, neue Bücher, überall Diktator’n.” (“I don’t fancy school anymore, I lost perspective; old teachers, new books, dictators everywhere.”) Within a few years the face of Berlin changed drastically. Romano talks about reconnecting with a good friend after three years apart, who then got him interested in DJing and electronic music: “He showed me around techno clubs, and everything was just wild at that time. In autumn 1992 I went to The Bunker wearing a thick thermal jacket and inside it felt like 1000 degrees. They had washing machines with heaters inside and there were people with gas masks and latex suits everywhere. Downstairs they played acid house, one story up there was gabba, on the next one there was a gang-bang party. And in the middle of it all this little boy in the big city, thinking: ‘What’s going on here?’” 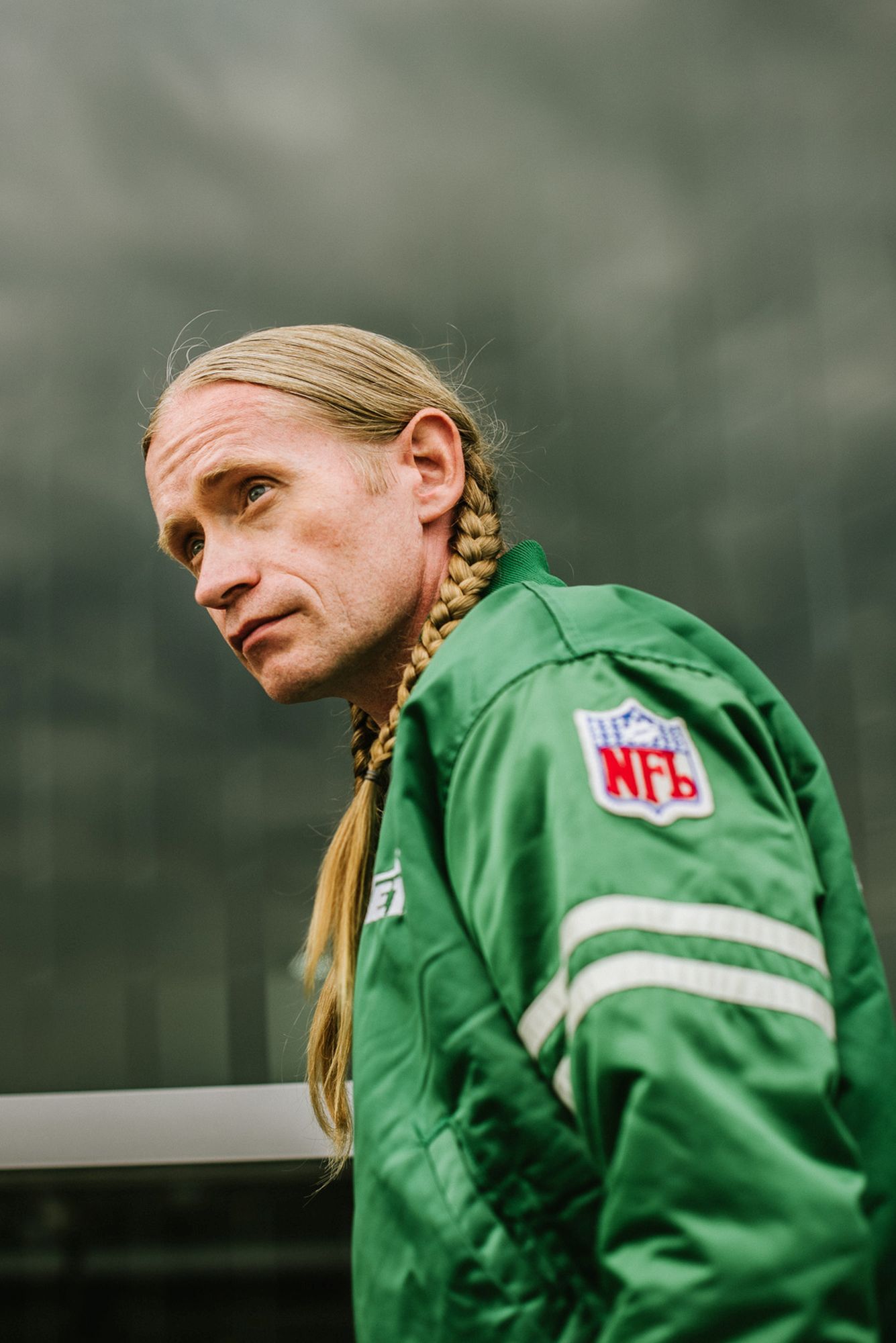 Pippi Longstocking is my role model: life is wonderful, make it colourful! 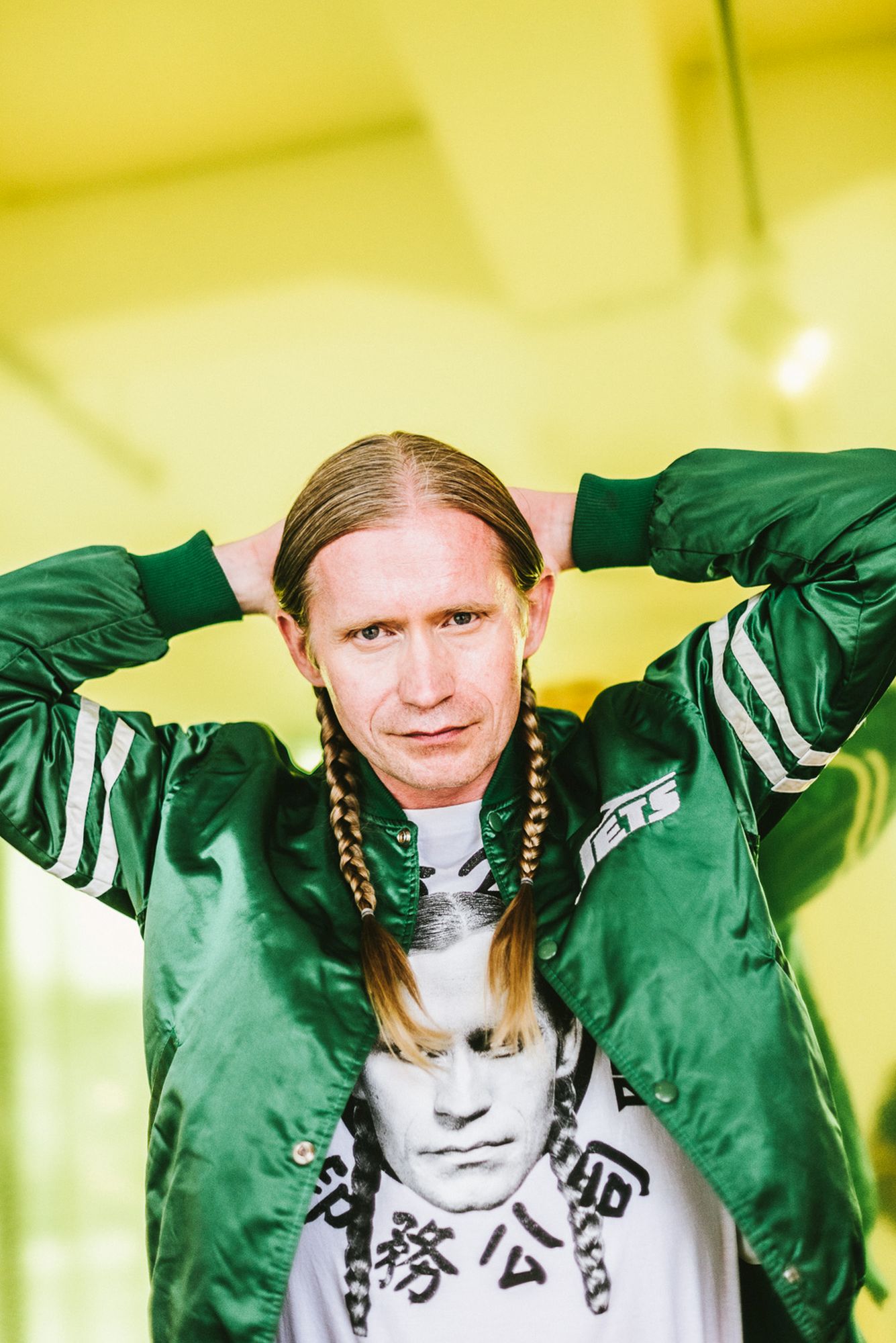 The city attracted more and more people and soon clubs died again, districts became unaffordable, rents rose to double the price (or more), even though the apartments themselves often stayed the same. The title track of Copyshop plays with this idea ofartificial change in value and price. In the accompanying promotion, which is more of a short film than a music video, Romano tells the story of a job he had in a copyshop for several years. “What I found fascinating,” he remembers, “is that the art scene has an insatiable demand for new products from dead artists. And then they feed themselves with fake art, which is a perfect replica and they pay millions for it. But once they find out, it’s just worth a fraction of what they were willing to pay before. People define the value of things themselves and the value constantly changes. All of it is an illusion.”

For the song, he worked together with the Übermut Project, an initiative that aims to give German arts a place on the global stage. He collaborated with Cantonese rapper MastaMic and shot the music video entirely in Hong Kong. Here you can see Romano prowling markets laden with knock-off goods, including several Romano figurines designed by his friend Siriusmo who also creates the beats for his tracks. Being in Asia for the first time was overwhelming, he confesses. “Before that, I had only ever been in a Chinese restaurant,” he says, laughing. “You think there is a lot going on in Berlin, but every corner there is as busy as Ku’damm.”

Romano never lost his charming, down-to-earth manner and often finds himself at the sharp end of his own wry lyrics. Despite this, he emphasises that everything he did, he did with sincerity and passion: from the metal band to the Schlager album. He’s fascinated by everything different and beautiful. He explains: “Pippi Longstocking is my role model: life is wonderful, make it colourful! Tie yourself some braids, glue something to your face, celebrate it. Be yourself, whatever that may be!”

Copyshop is out now, so have a listen and then catch Romano live at Columbiahalle on November 9th. 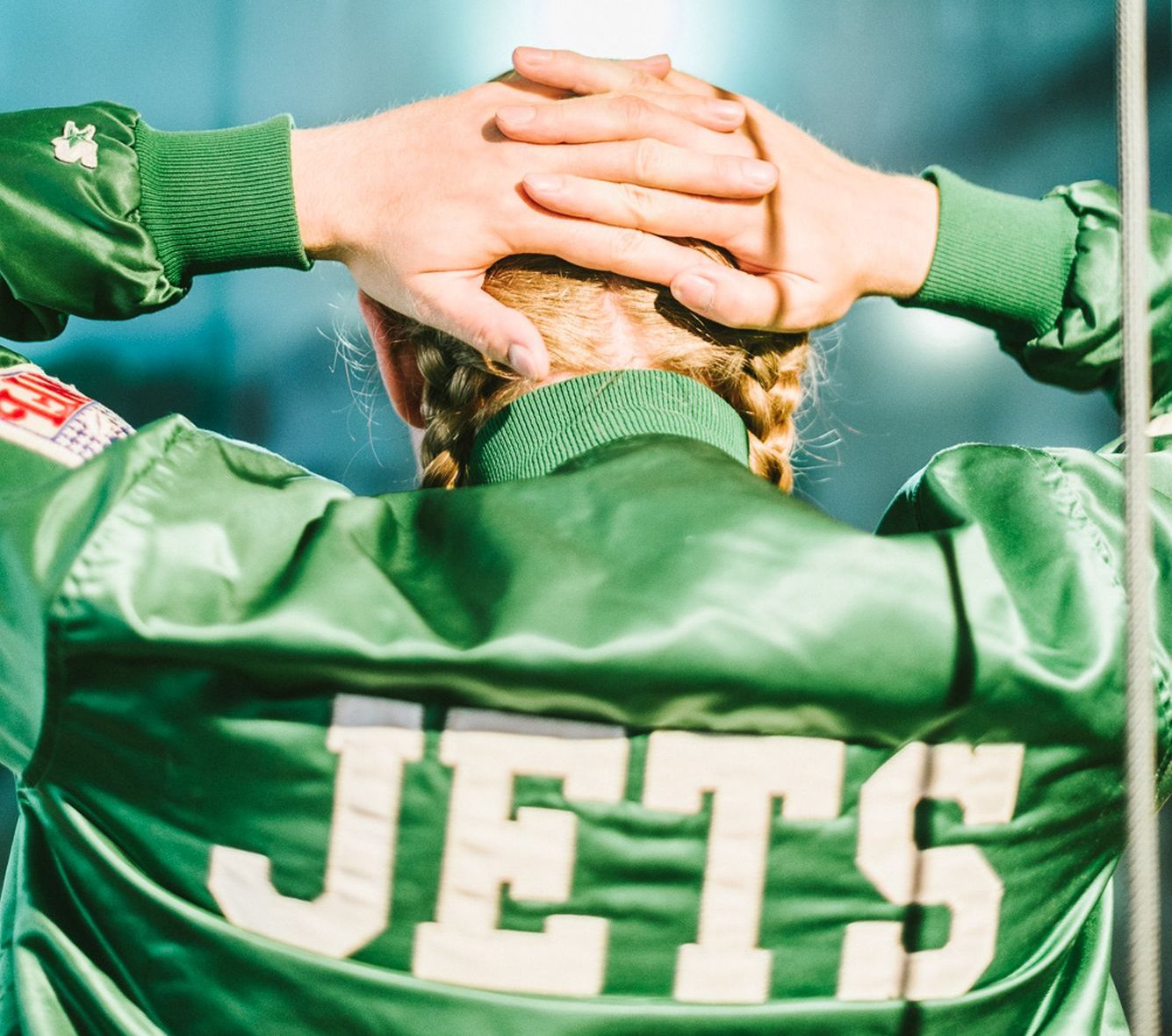