SOFT EIS is an island in Berlin’s creative industry 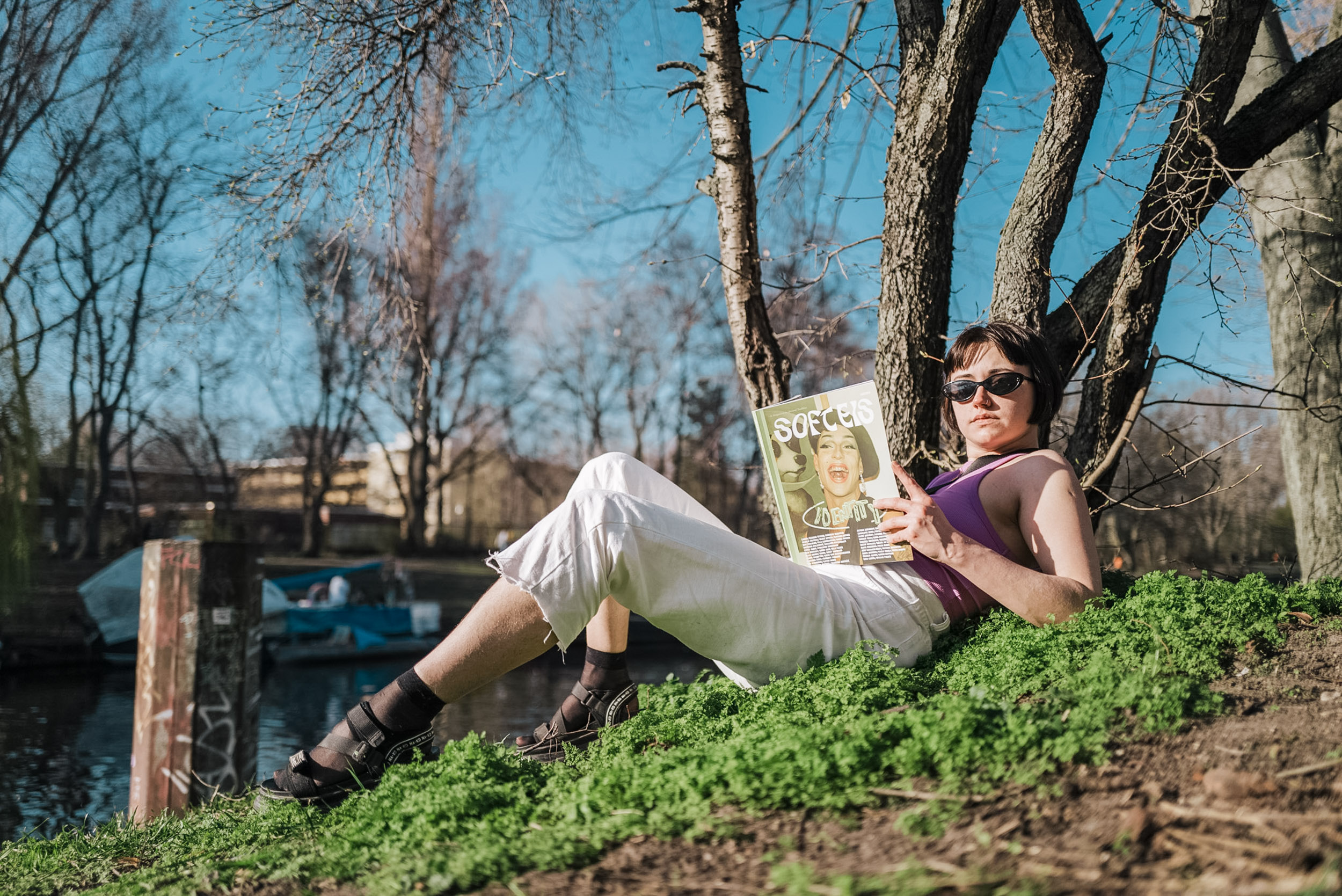 SOFT EIS is a Berlin-born magazine that explores, unravels, and transcends binaries. Its futuristic aesthetic and international perspective ushers in a vibey renaissance to publishing – one that’s cool enough to admire, human enough to relate to, and above all else, tears up the rulebook.

Every SOFT EIS issue slices into a singular theme to reveal its many, many layers. Through vivid design and individualized formatting, each contribution is given its own aesthetic, voice, and unique feeling. This collective approach to publishing results in a spectacular portfolio of human experience.

While its debut publication examined the complex topic of sex, its sophomore issue is set to crack the complex nut that is identity. LOLA spoke with Maïté Moloney and Lilo Dossenbach to discuss Berlin, dualities, and to get the scoop on all things SOFT EIS. 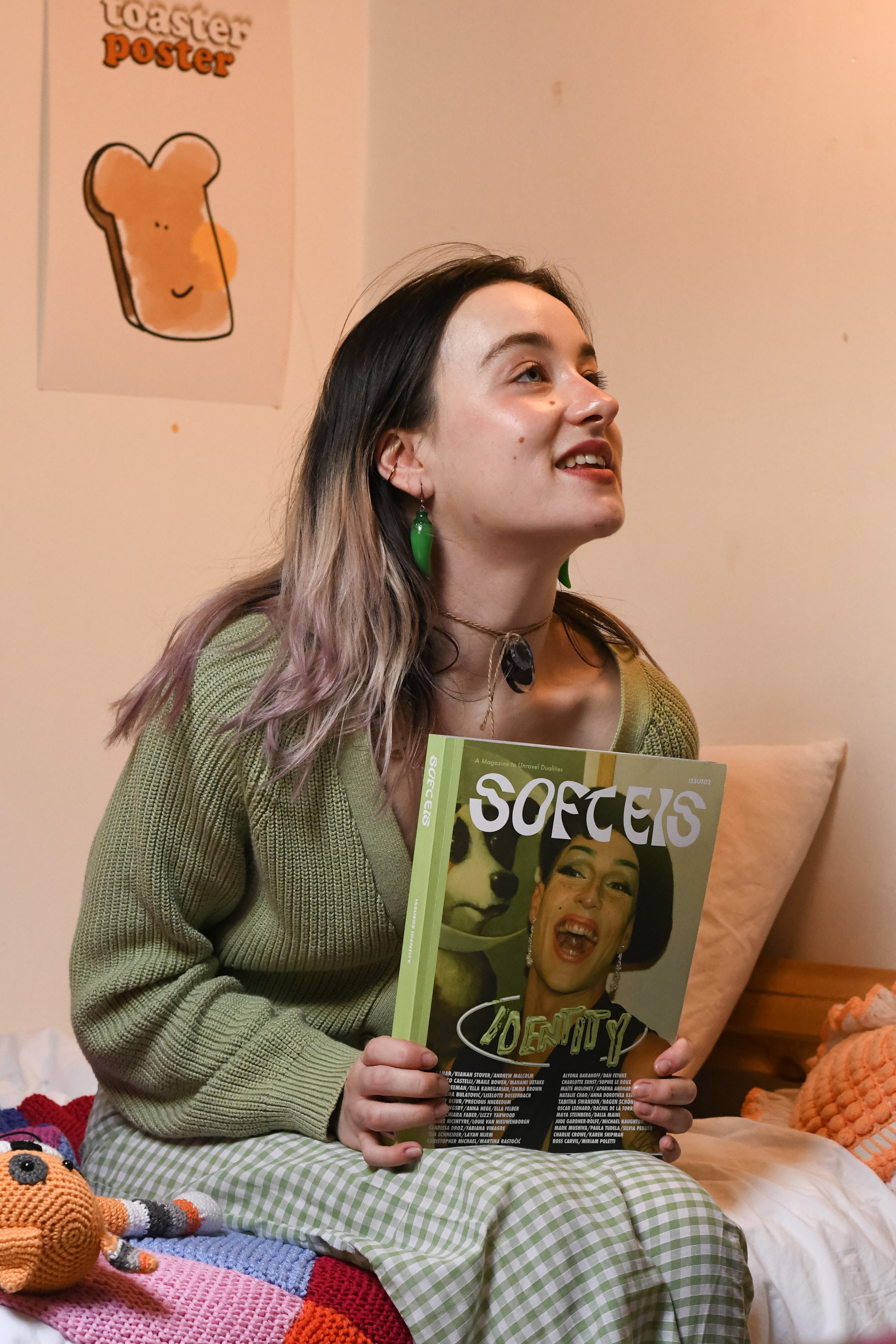 What would you describe as the purpose of your magazine?
Maïté: Initially, we began SOFT EIS to go alongside an event series that Lilo was working on called WOYM (What’s On Your Mind). We realized that dualities were present, or at least thought to be present, in so many themes we were interested in, so we decided to explore that through a magazine. We choose our themes carefully. So far, we’ve unraveled sex and identity. Both are things that at first present as being a duality, as being hard or soft for example, but when you unravel them, you discover an underlying multiplicity throughout. And so that’s our aim for SOFT EIS – to unravel people’s misconceptions about preconceived ideas.

And how about the name SOFT EIS, how did that originate?
Lilo: Before we began SOFT EIS, I had been working with an art residency. During my time there, we discussed sex a lot – the softness and hardness of it all. After I had finished, this theme clung to my mind. I wanted to explore it further somehow, and this name just encapsulated it perfectly. It’s German, it’s English, it just felt right. There are no limitations to it. It explores softness and hardness, not one or the other, and that’s what I wanted to do – to prove that you don’t have to be one or the other.

And as co-founders, you’re based in Rotterdam and Berlin, right? Was the collaboration across the two cities purposeful?
Maïté: No, actually. We began the publication in Berlin in 2018 and at that time, we were both living in Berlin.

Lilo: Yeah we used to live around the corner from each other which made working on the magazine easy. I could see her window from my courtyard and we would meet in person throughout the week in my living room and later on, in a studio.

Maïté: Then last year I moved to Rotterdam and ever since, we’ve been working long distance. There are definitely limitations to working in different cities. However, as SOFT EIS grew, it became more efficient to split decisions and projects up. Having to delegate like this encouraged us to lean into our strengths, so in some ways, it’s worked in our favor.

That’s our aim for SOFT EIS – to unravel people’s misconceptions about preconceived ideas.

As a magazine born in Germany with a German title, it seems that Germany has a real place in SOFT EIS.
Lilo: I think it’s just important that when you come into a city that has a different primary language, that you pay respect by learning it. However, we want SOFT EIS to pay respect to multiple languages and cultures, not just German ones. We take submissions in any language, from Armenian to Italian. We do this, in part, to pay respect to Berlin. There’s a multifaceted culture that runs through this city. Without representing this broad spectrum of identities, we wouldn’t unravel past the duality, and that’s what we want to do – to show that there’s more than meets the eye to one thing, be it a city or a concept.

To what extent does Berlin influence your brand?
Maïté: Well, SOFT EIS is a lovechild of Berlin. We met each other here, we began our publication here, and a lot of our readers and contributors are here. So while I don’t think the city dictates our aesthetic or themes necessarily, it’s always going to be the place where it all began.

Lilo: Yeah we definitely take inspiration from the city, whether it be conscious or subconscious, but it doesn’t dominate our thought process either.

Issue One explored sex – something that many people come to Berlin to explore and enjoy. Was it a no-brainer to make it the theme for your first issue?
Maïté: It was definitely something we wanted to explore. Sex is a topic of personal interest for both of us and, at the time, there were limitations and binaries present throughout the sex-positive conversations in Berlin.

Lilo: We found discussions about sex in Berlin to be quite dominated by certain groups of people. That made them feel intimidating or unwelcoming to others. We wanted to open these discussions up, to instigate conversations that we, as queer women, hadn’t heard and that aren’t heard enough in general. The unraveling of those discussions and perspectives is what became our beautiful, soft first issue.

Maïté: And as much as issue one began as an exploration of our own personal interest, in the end, what I loved about it most was how personal it became for everyone else too. It became this intimate, strong statement and that’s exactly what we wanted. 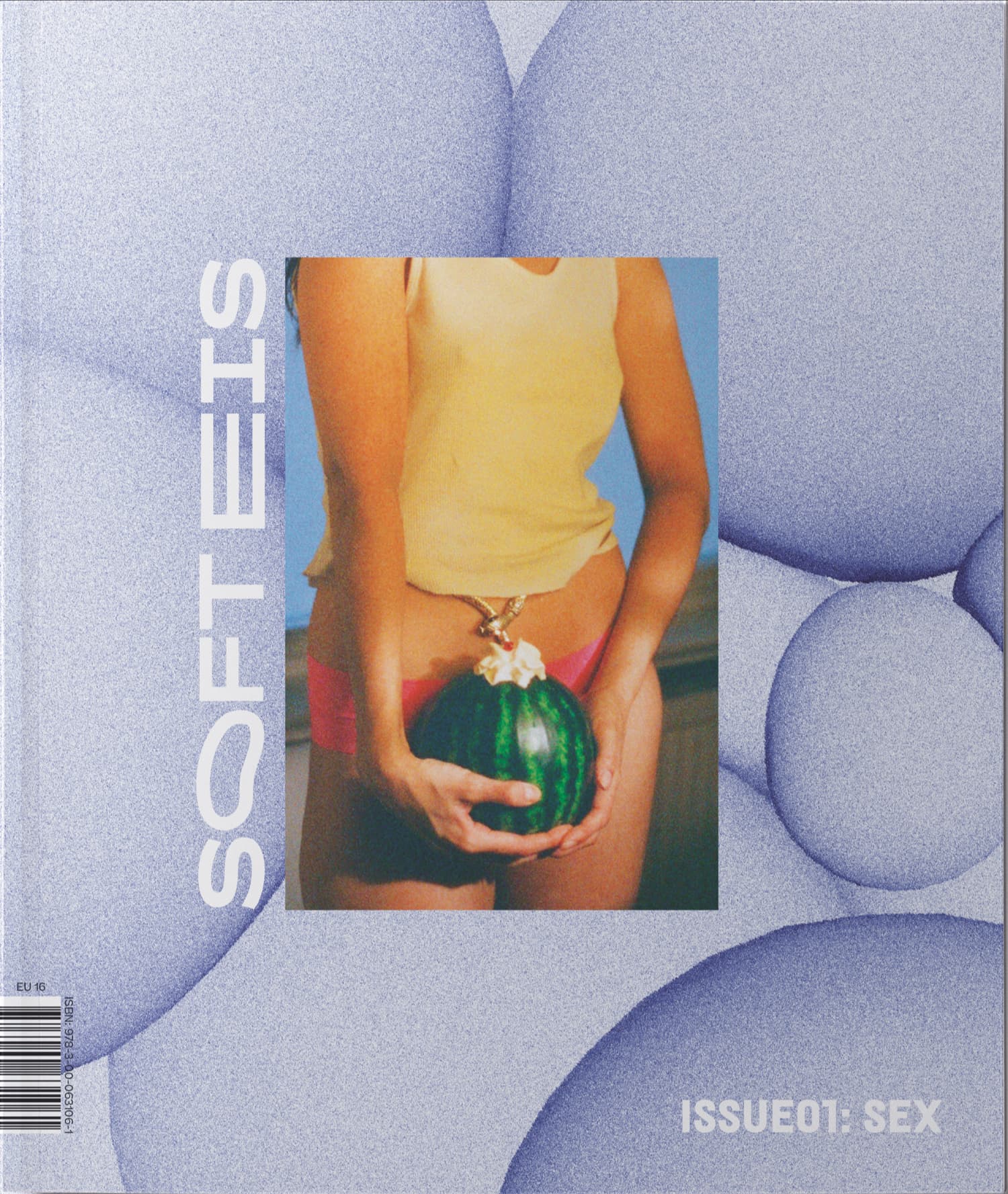 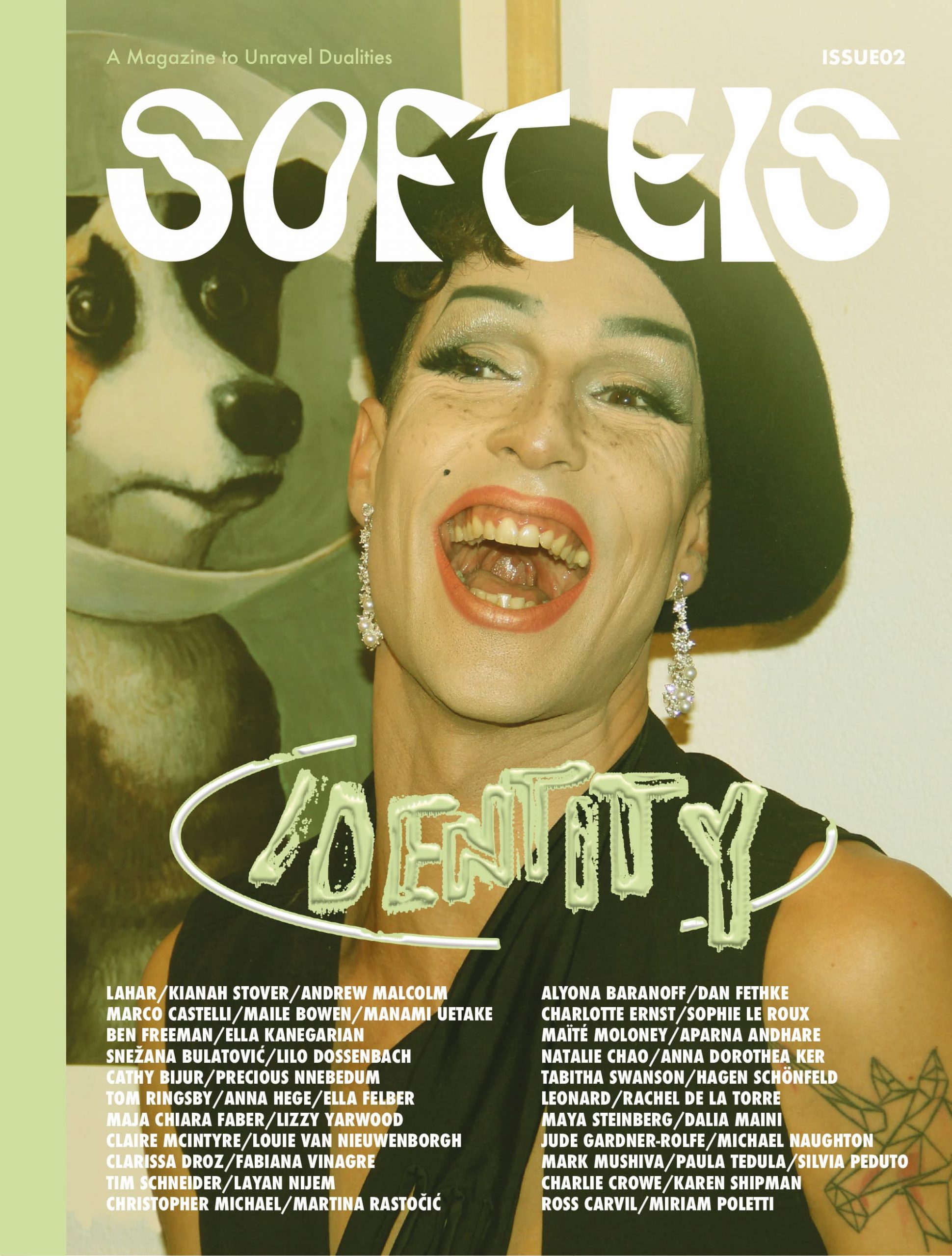 Your sophomore issue will explore identity. How did exploring identity through the lens of SOFT EIS change your perception of it?
Maïté: We were really excited to do identity. We felt that there was a lot of scope within this issue to showcase different experiences, stories, walks of life, and it didn’t disappoint. Issue Two’s contributors are a bunch of interesting, varied people. Each submission speaks with such honesty and clarity, yet they’re all so different.

Lilo: What struck me the most was how varied people could respond to identity as a concept. That’s evident through the sheer size of Issue Two. It includes work from over 50 contributors, amounts to more than 200 pages, and yet somehow, I feel we just scratched the surface with identity. We’ll never know enough about it.

Wow, over 50 contributors! Did you want to include that number of submissions from the get-go?
Maïté: No, we just felt we couldn’t not include them! We build SOFT EIS around the submissions, not the other way around. Once we decide what submissions we want, which is always a hard call to make, we just find a way to print each of them.

And what about the range of international contributors, are you always mindful of including an international perspective?
Lilo: With the second issue in particular, we wanted to include as broad a range of cultures as possible. I mean, we want it to explore identity, right? We felt that if we were to explore a theme like that properly, then we couldn’t limit perspectives

Maïté: Including international voices also just feels natural to us. Both of us have moved around throughout our lives. It would feel unnatural for us to only showcase one culture, one experience because that’s not how we live ourselves. 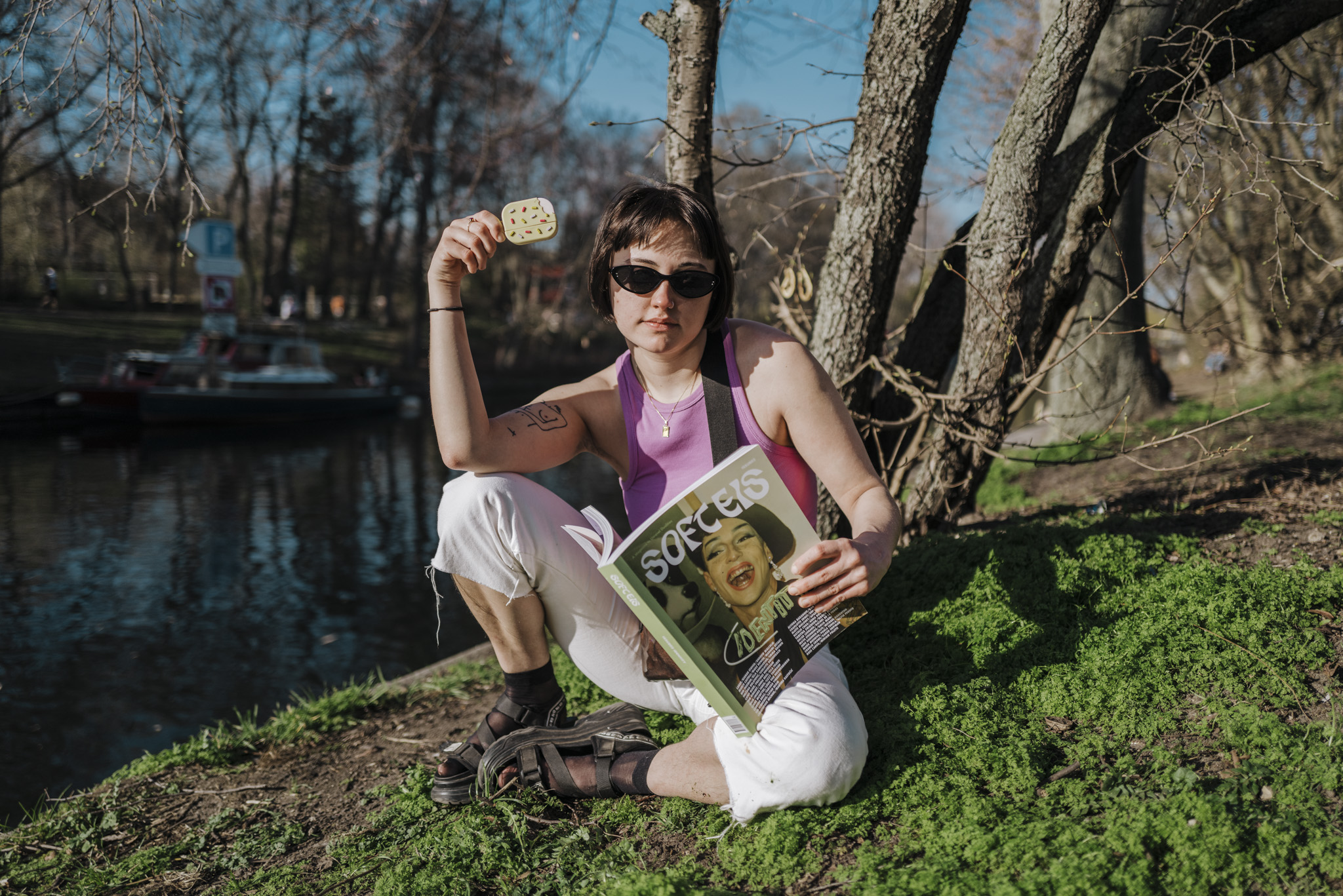 We allow the contributions to take center stage.

SOFT EIS plays around with visual and written form in the magazine, each article has its own font, color scheme, its own mood board essentially. What’s the purpose of adapting each piece of content to its own design?
Maïté: I mean to us, we don’t understand why every publication doesn’t do this! Why wouldn’t you adapt each spread to each contribution if you could? From reader experience to our love to wacky aesthetics, we want our reader to be blown away, to be absorbed into the magazine, and we also want our designers to experiment. To us, the design isn’t a blank canvas on which you just place the contribution, it’s more than that. It’s a piece of art.

Lilo: We allow the contributions to take center stage. To us, magazines that stick to one visual identity every time aren’t just missing out, they’re limiting the reader’s visual and conceptual experience. We want SOFT EIS to rip up the rulebook. We tell our designers that there are no rules, just that it has to be legible and respectful of the piece.

The veins of SOFT EIS aesthetic are ethereal, cosmic, ageless even, yet began this project early in your careers, how has your experience in the industry been thus far?
Lilo: I’ve had so many conversations with women in many creative industries who experience imposter syndrome regularly. While it’s important not to feel ashamed for feeling a certain way, it’s equally important to have a steadfast mindset. Show them why you deserve to be at the table in the first place. Both of us take such inspiration from the punk world, that kind of devil may care attitude, and that’s key! It taught us that if you try something ambitious you might fail, but you also might succeed. And if you do, then wow! You have nothing to lose except for some time, some dignity, and maybe a lot of money.

Maïté: Something that I feel I’ve actually learned from Lilo is to be courageous. When we were creating Issue One, I would watch her and think I want to handle myself like that, too. Now we both come to the table ready. When people decide to treat us like imposters, like we shouldn’t be there, we show them what we’re capable of.

And finally, what’s next for SOFT EIS?
Lilo: Well, most importantly, we’re launching our own publishing house! It’s called SOFT EIS Presse and will allow us to share more amazing work from our contributors in the form of leaflets, zines, and books. Then, once summer begins, we’ll start working on Issue Three. Additionally, we’ve got a radio show, a merchandise line, and we’re always looking for new ways to create, to collaborate with other people, so watch this space! 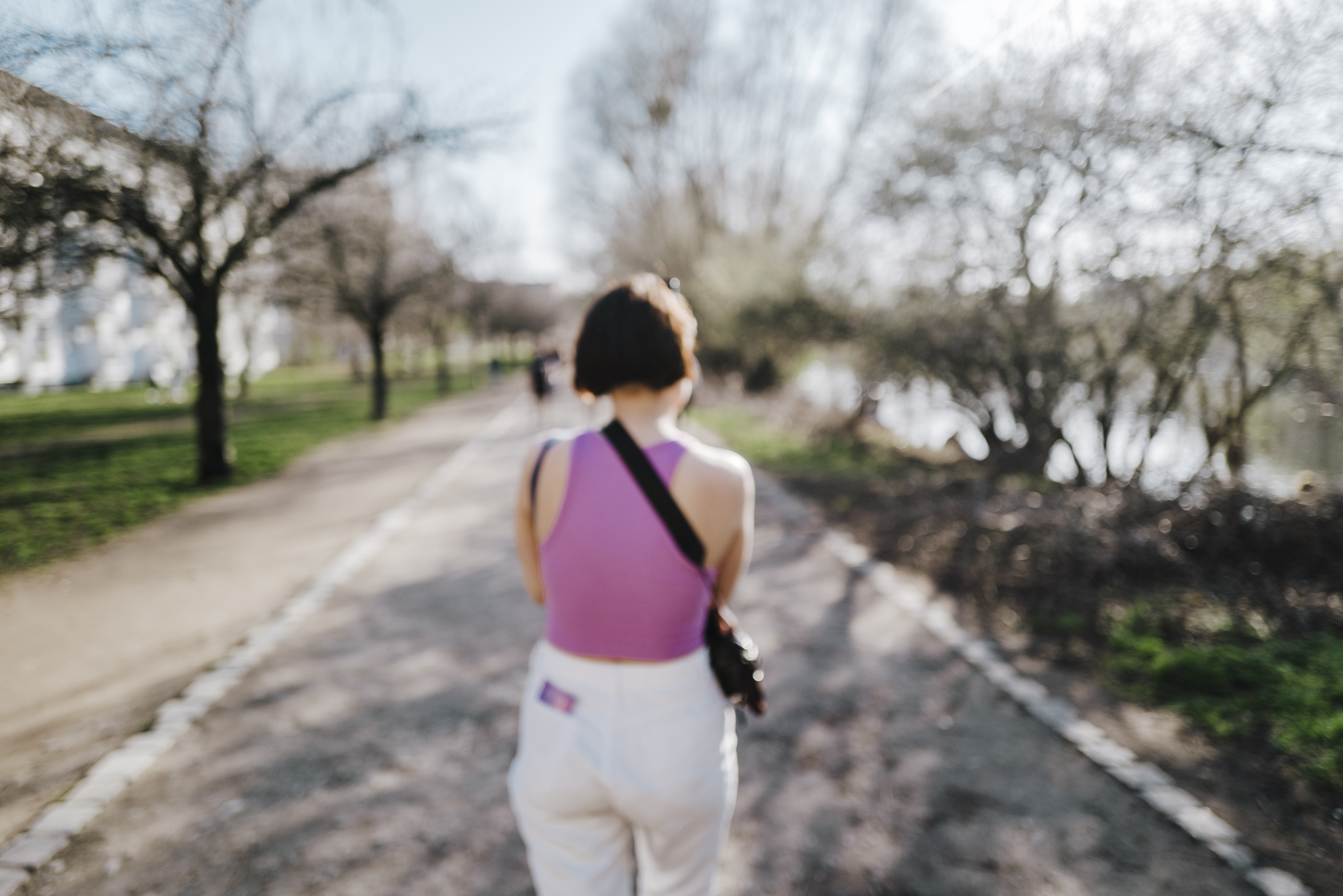