The evolution and philosophy behind Berlin’s most dynamic literary journal 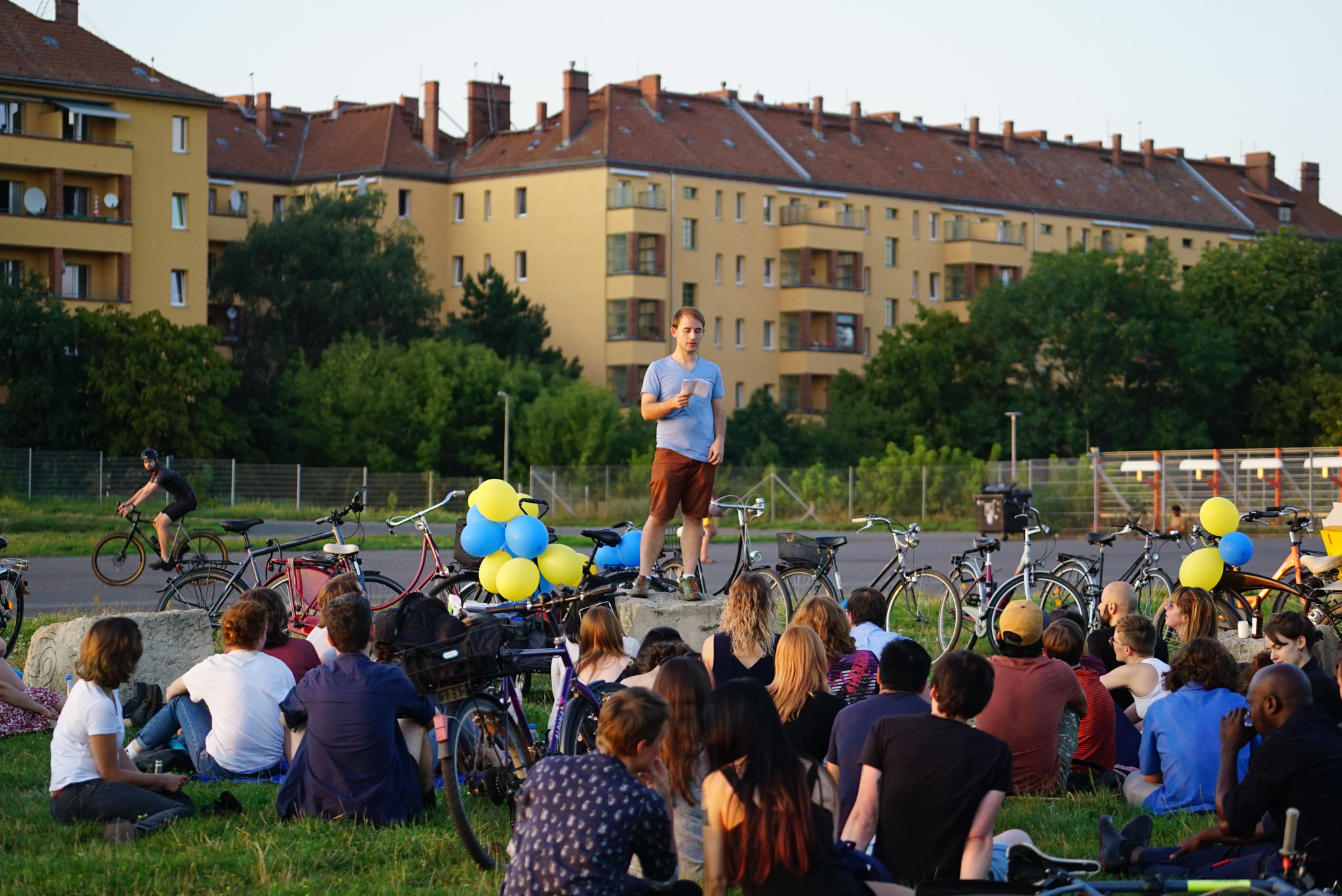 Founded in 2009 on the gathering wave of a thriving international literary scene, SAND has evolved into one of the most widely recognised journals in Berlin. It celebrates the diversity of this city in which we are all grounded, dynamic both in its small granule shifts and in its larger landslides, continually kinetic, forever shifting.

In nearly two thousand pages of written word and on-stage at their live events, SAND offers space to an eclectic collection of creative expression, particularly to often-silenced voices. We spoke with Editor in Chief, Jake Schneider to learn more about the story behind this important publication.

What triggered the origin of SAND?
In a word, community. Back in the late 2000s, Berlin’s international literary scene had just crossed a kind of threshold. There had been other literary journals in English, but maybe the city wasn’t quite ready for them; they didn’t stick. But by 2009, when Becky L. Crook founded SAND, the city boasted weekly readings, English bookstores, a whole program of writing workshops, book launches, and even a poetry festival. And that’s just in English. There were parallel developments brewing in languages like Polish, Russian, French, Hebrew, Italian, and later Arabic. More and more transnational writers and translators were flocking here, often connecting with the already cosmopolitan visual arts scene. Everyone benefited from the city’s abundance of affordable time and space. The result was a literary convergence across languages that was, to the best of my knowledge, globally unique. Literature often struggles to look beyond a country’s horizons. But SAND came on the scene in that moment of mixture, and over more than twenty issues, despite the rise in both rents and reactionary nationalism, that formative atmosphere has shaped everything we’ve done. 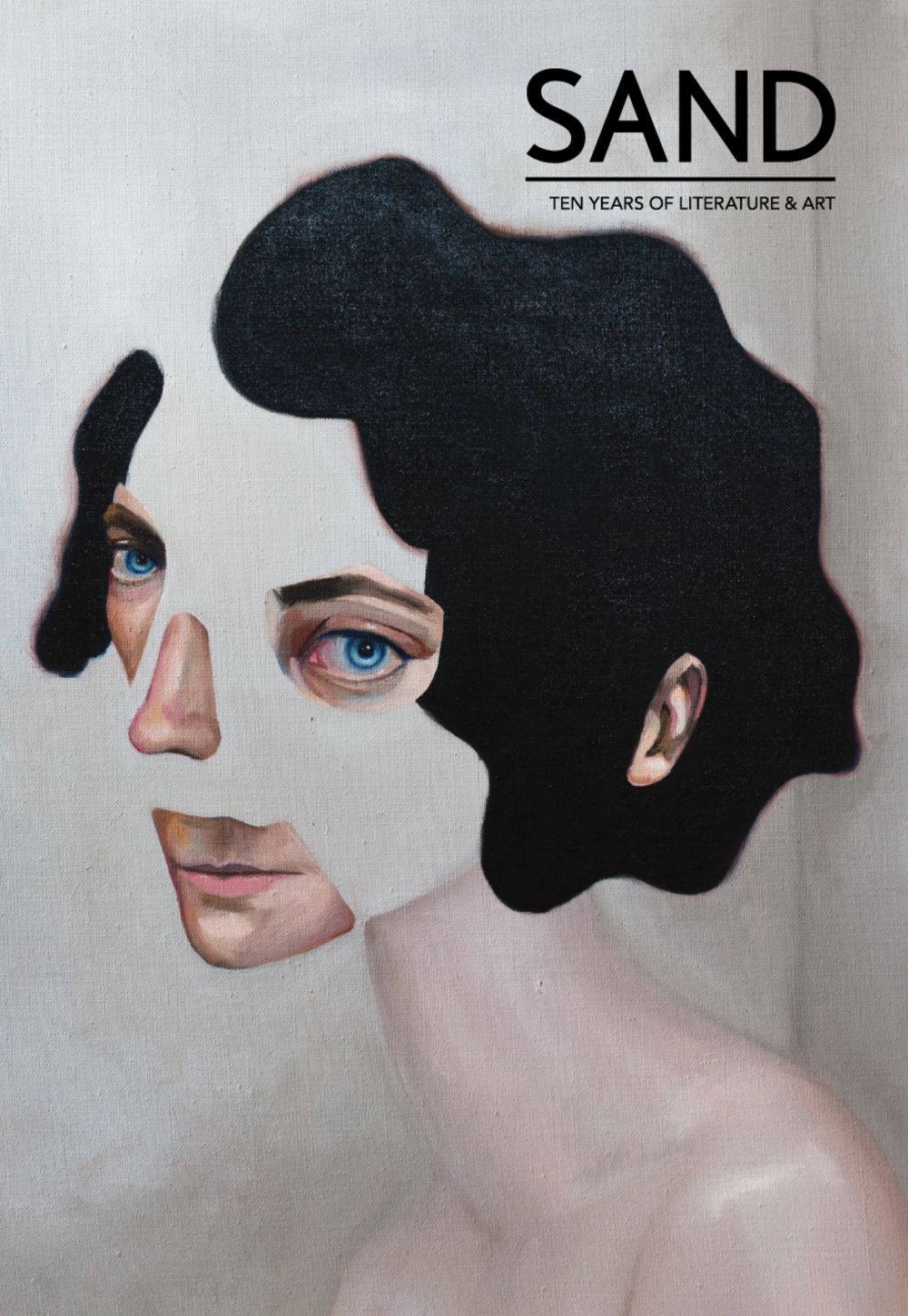 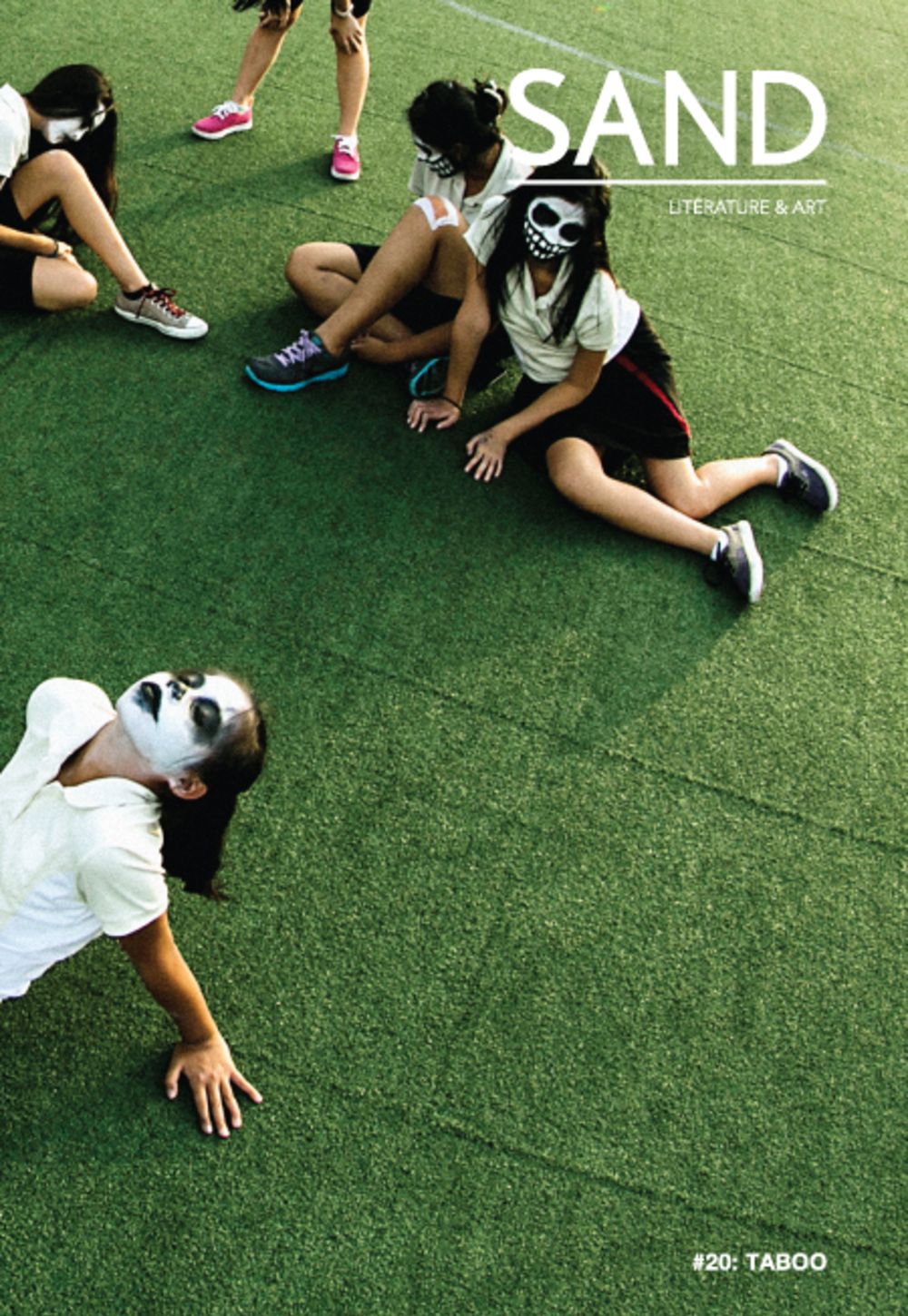 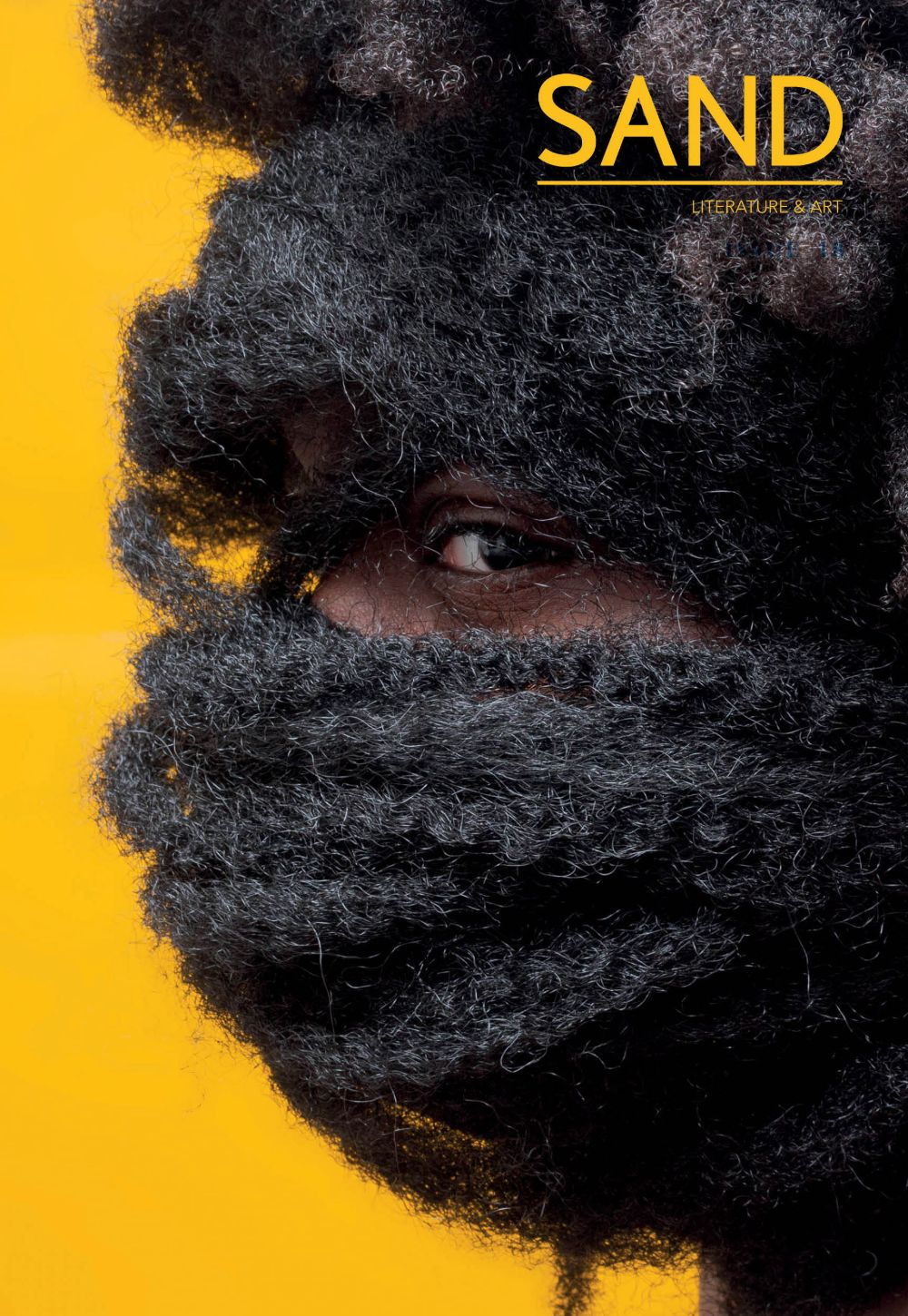 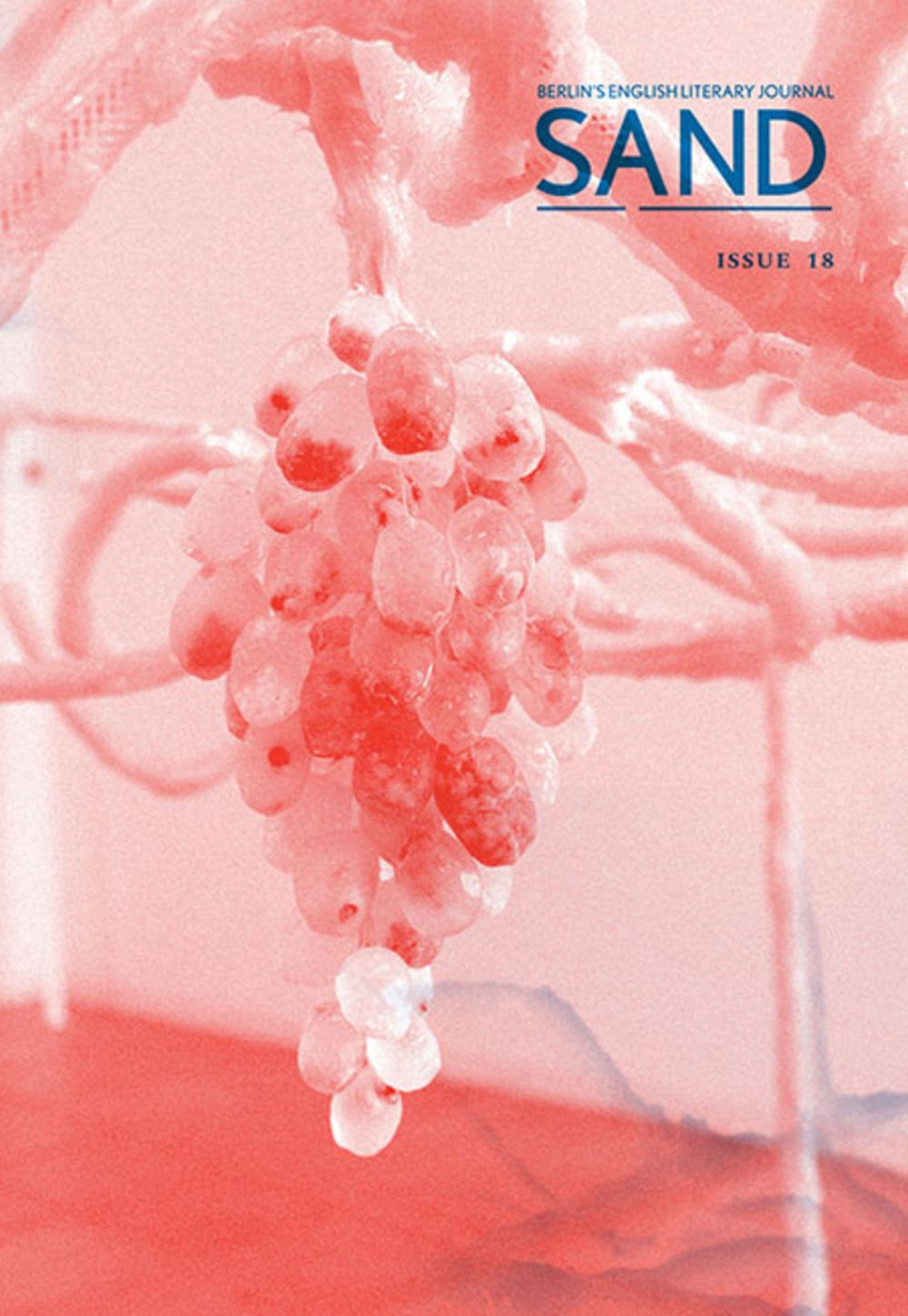 Issue 21 marked ten years of SAND. Do you think the purpose of the journal is the same today as it was when it first started?
I think our main functions as a journal have held steady: to bring readers, editors, artists, writers, translators, into a single conversation on the page. And to amplify interesting and exciting work that our readers are unlikely to have seen elsewhere, with a growing emphasis on featuring artists and writers from groups and places that have been systematically sidelined by the publishing industry. Our tastes and preoccupations keep evolving with the team, but that’s an advantage of the journal format. We live and publish in the moment. We’ve grown a bit more professional – recently, after a decade of volunteering and scraping by, we finally received public funding from the Berlin Senate – but through it all, we’ve sustained radically independent ideals. Our tastes are still uncompromising. We care about craft and voice and edge, not favoritism or name recognition.

For the most recent issue, you also acknowledge the role of the pandemic, stating, “we’ve gotten to know the pieces even more intimately, seeing them in a surreal light we could not have imagined when we began this issue.” How has the pandemic affected SAND this year, especially in terms of not being able to host a launch party for issue #21?
As a publication that thrives on community, the necessary suspension of face-to-face gatherings in Berlin has been devastating. That launch party especially. On two nights a year, that’s how we celebrate all the creativity and hard work that was distilled into the physical object of the new issue. As our fiction editor, Ashley Moore, mournfully observed, there is no substitute for seeing people paging through the freshly printed copies we’ve been working so hard on for months. Hearing how contributors read our favorite lines out loud. And then dancing it out. Our anniversary would have also commemorated those parties themselves, where many Berliners first got to know us (and each other).

Then again, the Internet allowed us to connect with contributors and fans from six continents who never could have made it to the party venue. Our quick-thinking event coordinators, Courtney Gosset and Nadja Poljo, transformed our usual night of readings, artist talks, and dancing into a weekend-long festival we streamed on our YouTube channel, complete with readings, studio visits, animations, interviews between editors and contributors, and a reunion with some of our editorial alumni. We learned a lot from the experience. But we’re still so eager to mingle organically with our creative neighbors again when this is all over. 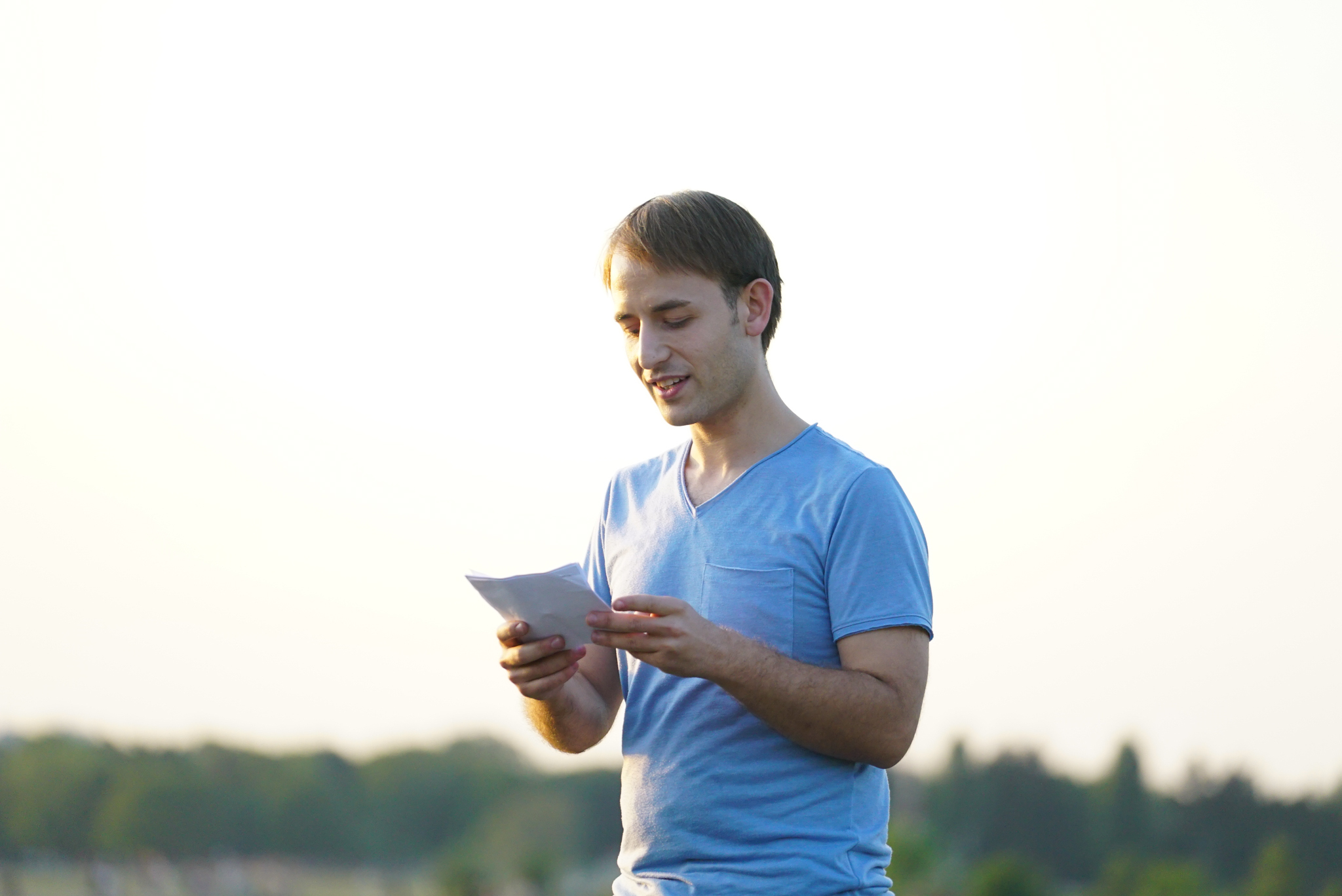 We try to use our platform – and our language’s huge audience – to amplify voices that publishers and curators have often erased or marginalized.

How important is Berlin as SAND’s location of publishing?
In some ways, publishing is a logical next step for any maturing literary scene. But in a linguistic enclave, it can also be a radical act. Generations of publishers in exile have defied censorship and repression in their countries of origin, from Parisian presses printing 20th century queer writing in English when homosexuality was severely criminalized in both Britain and most places it had colonized, to the publishers in exile of Czech and Hungarian writing during the Cold War. Similarly, an émigré writer such as Ngũgĩ wa Thiong’o can find space for self-expression abroad that is unavailable to him in Kenya, allowing him to write masterpieces in Gĩkũyũ that speak intimately to the Kenyan – and human – experience from across the ocean. Thanks to his publishers and the miracle of translation, we can read them.

We look to these role models with great respect, but our own case is different. Simply by publishing in our native English, we find ourselves heir to a dark legacy of British and US cultural imperialism. Resisting that legacy, we try to use our platform – and our language’s huge audience – to amplify voices that publishers and curators have often erased or marginalized. We don’t see ourselves as either exiles or emissaries. Berlin, this gathering place, is our chosen home. Currently our team consists of fourteen people with at least eight different passports, and almost all of us moved across borders to live in this singular city. Berlin deeply informs how we read literature and look at art, even if most of the authors and artists we feature live elsewhere.

What about the name SAND? Where did that journal title come from?
Sand is what Berlin is built on. It’s our shared foundation, permanently shifting beneath our feet.

You don’t seem to have themes for submissions, but some of the issues are given a theme; like issue #20 is Taboo. Is this something you consider and decide while reading the submissions?
Our loose themes are a kind of chicken and egg problem. As you point out, we never announce one with our call for submissions, even if we have ideas, partly because we want to see what people are already thinking about. Each batch of submissions reflects all the authors’ and artists’ preoccupations from that six-month period, and the process of assembling an issue draws some of them out.

In the end, as I write the editor’s note attempting (loosely) to tie the issue and theme together, my own ideas have to stretch around the complex and diverse body of work our editors have selected. If I had to choose, the issue would be the chicken and the theme would be the egg it lays. But that egg also contains an embryo. 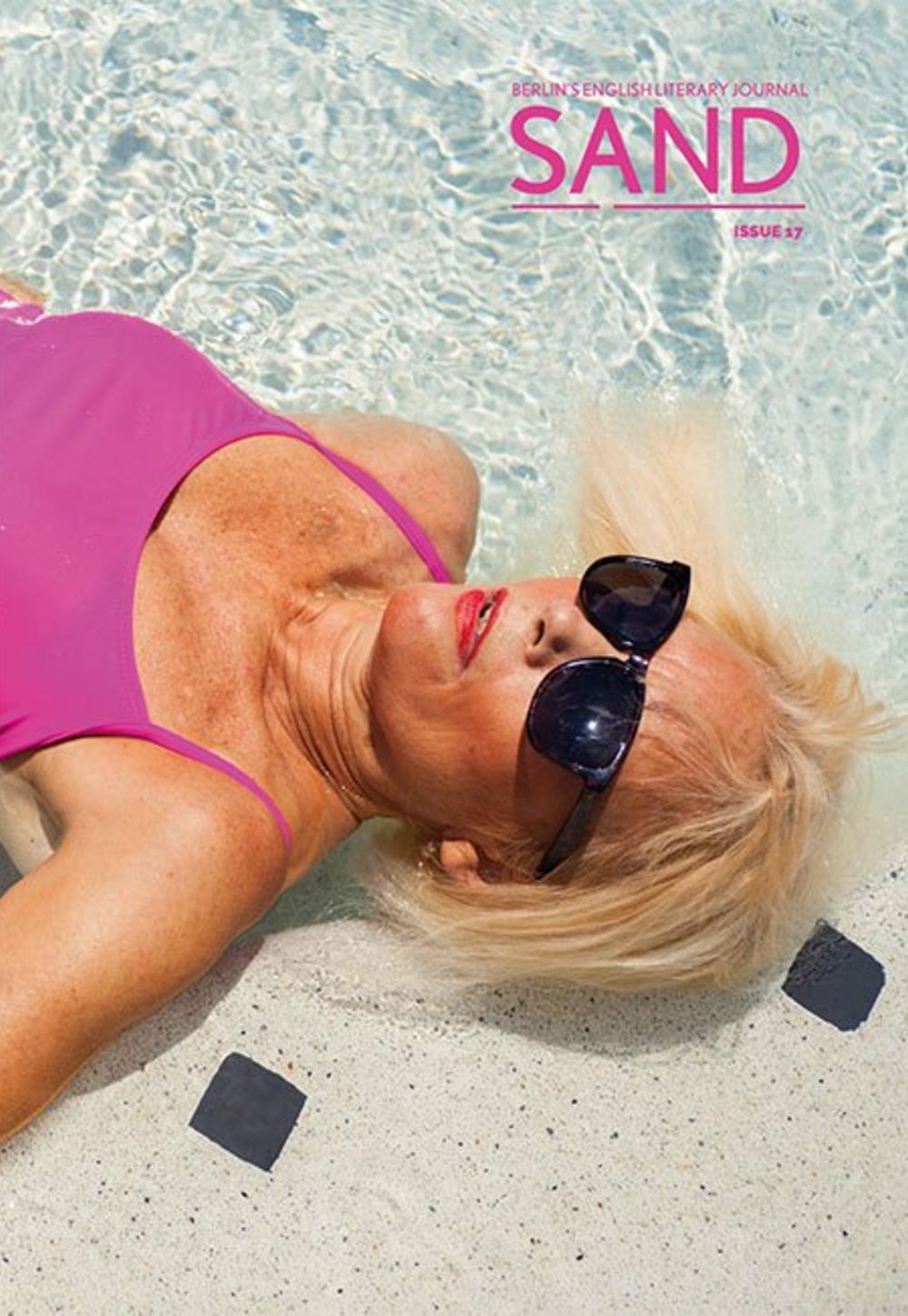 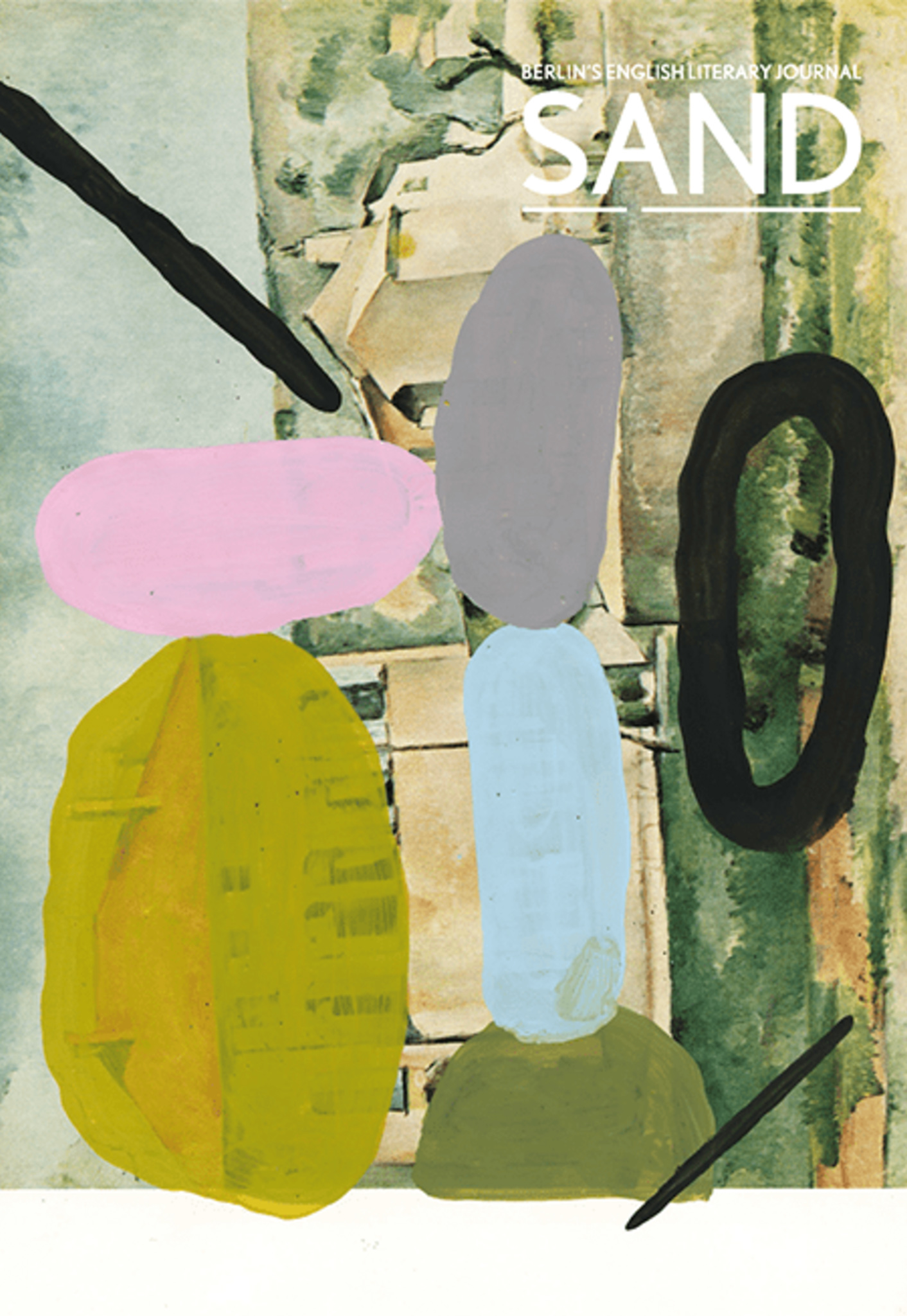 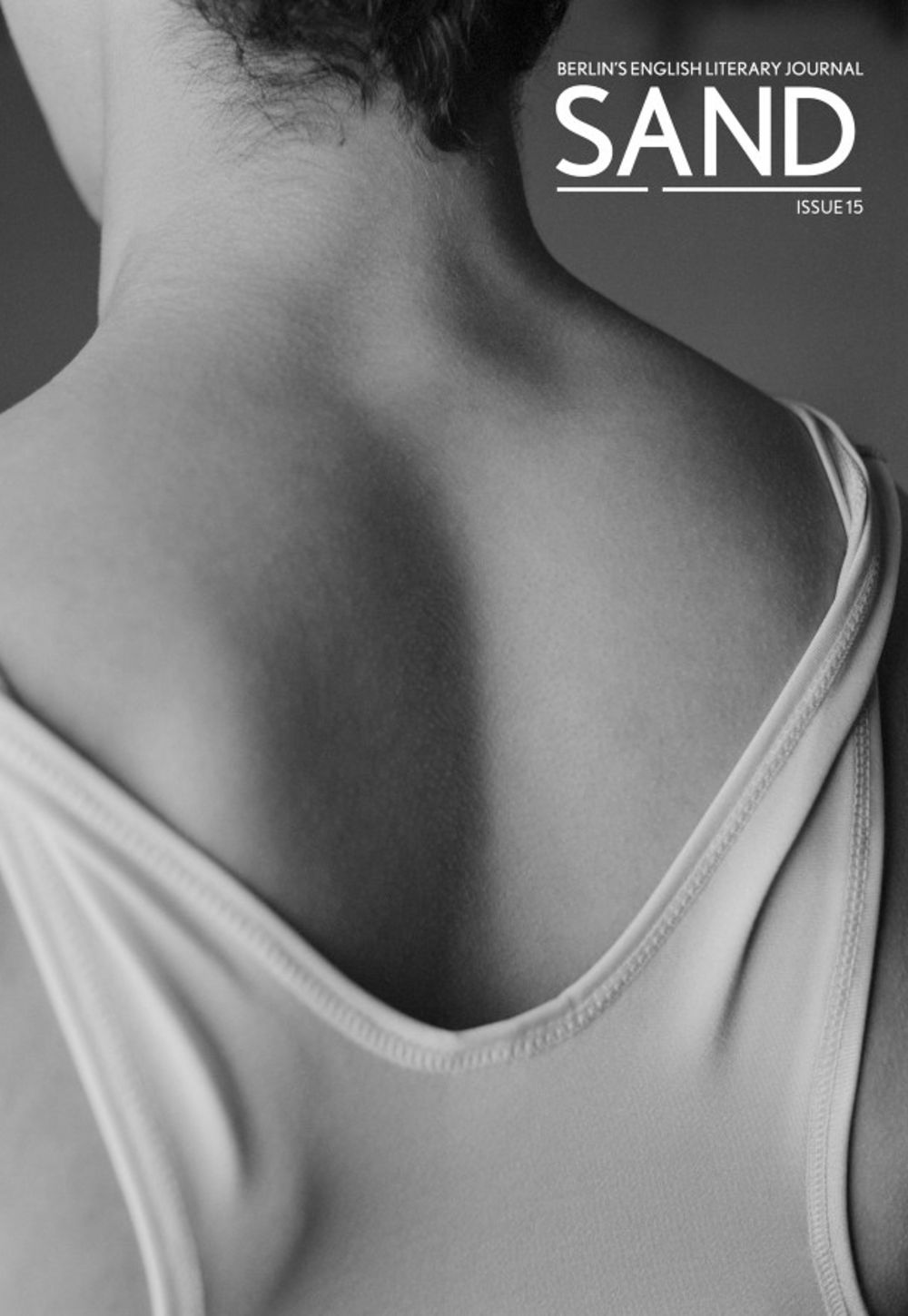 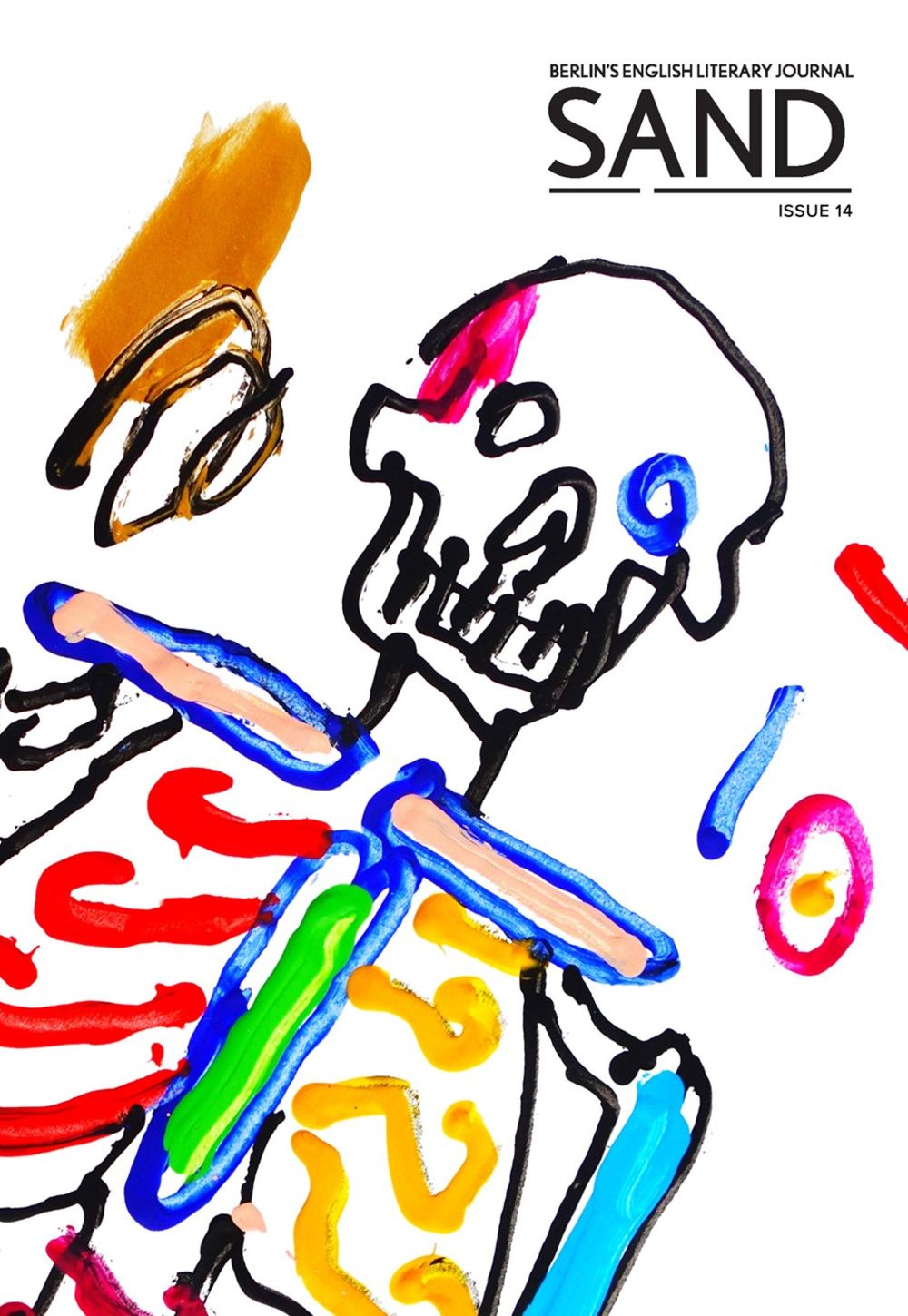 On your submissions page, you welcome, “writers and artists from a range of perspectives to submit, including those who are women, LGBTQ+, people with disabilities, people of color, working-class, and/or geographically underrepresented.” How important is diversity in terms of the art and its artists for SAND?
We believe that a diversity of perspectives corresponds to a much more vibrant and engaging set of poems, essays, visual artworks, or fiction pieces. Not everyone chooses to write about the specifics of identity in their work – all artists have an equal claim to universals – but just as simply living in Berlin has affected what and how we read, we know that different lives result in different art. Why should bookshelves or galleries be so repetitive? Why are certain styles and stories treated as more ‘literary’ or ‘artistic’ than others?

Our last three covers have all spoken to questions of selfhood through depictions of obscured faces: Vicky Charles’s face wrapped in her natural hair in a photographic self-portrait (SAND 19), teenage girls wearing ghost makeup in a video installation by Sookoon Ang (SAND 20), and an unnamed woman’s fragmented features in an oil painting by Morgan Stokes (SAND 21). These artists live in three different countries, and their artist statements invoke vastly different subject matter: “the beauty of black hair,” “coming of age anxiety,” and “our fraught relationship with technology.” However, the faces themselves both reflect and transcend the specifics.

We believe that a diversity of perspectives corresponds to a much more vibrant and engaging set of poems, essays, visual artworks, or fiction pieces.

Who do you imagine to be your readership?
Just as important as publishing a diverse issue is doing so with diverse audiences in mind. We’re not in the business of collecting tokenistic curios for an imagined ‘default’ demographic. We try to assemble a varied body of work that sparks recognition in more people, which means expanding the scope of what is ‘relatable’. Overall, we hope to broaden the range of people and places and situations that art and writing are likely to portray in print. We can never know what exactly will strike a chord with which readers, so we publish work that strikes all kinds of chords.

What have been the biggest challenges of creating, establishing, and continuing an English literature and art journal?
I would say one of the hardest parts has been continuity. The Berlin English-speaking community is very transient, individually through not as a group, and our team has been no exception. On the other hand, this turnover has encouraged us to be resilient, develop more sustainable processes, and keep evolving. So paradoxically, it might be why we’re still around. As a group.

What do you see for the future of SAND?
As with our themes, I’d prefer not to set expectations. Better to keep at it, year after year, and then look back and reflect on what we’ve made. Like a beach, reshaping itself with each tide.

You can purchase previous issues of SAND online and also find copies at various bookshops throughout Berlin and other European cities. Follow them on social media to stay up-to-date with their events and to know when their submissions open for the next issue. 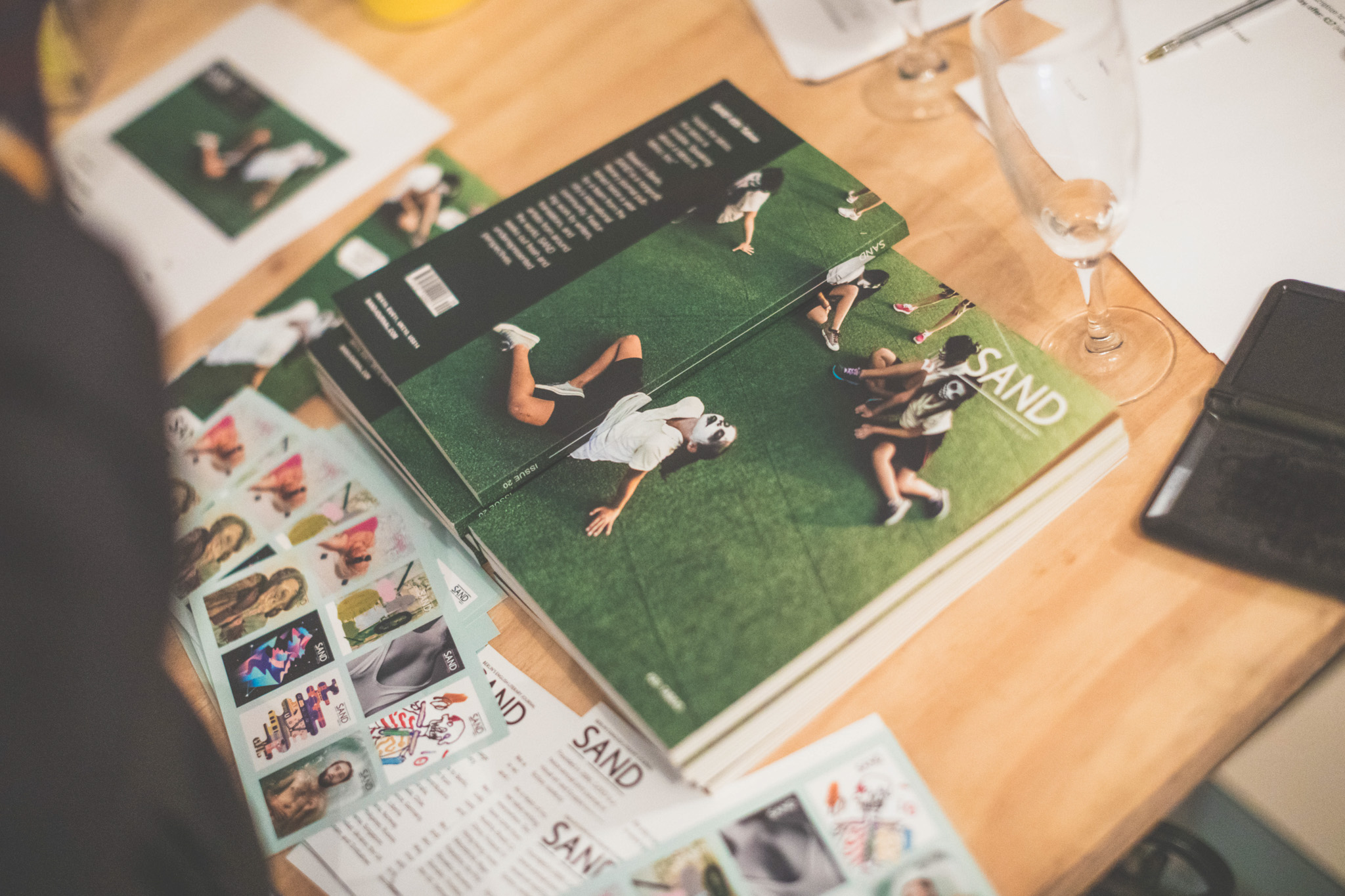