James Martin, aka DJ-producer Eira Haul, tells us how lockdown laid the table for his DJ charity cookbook, Turn The Tables 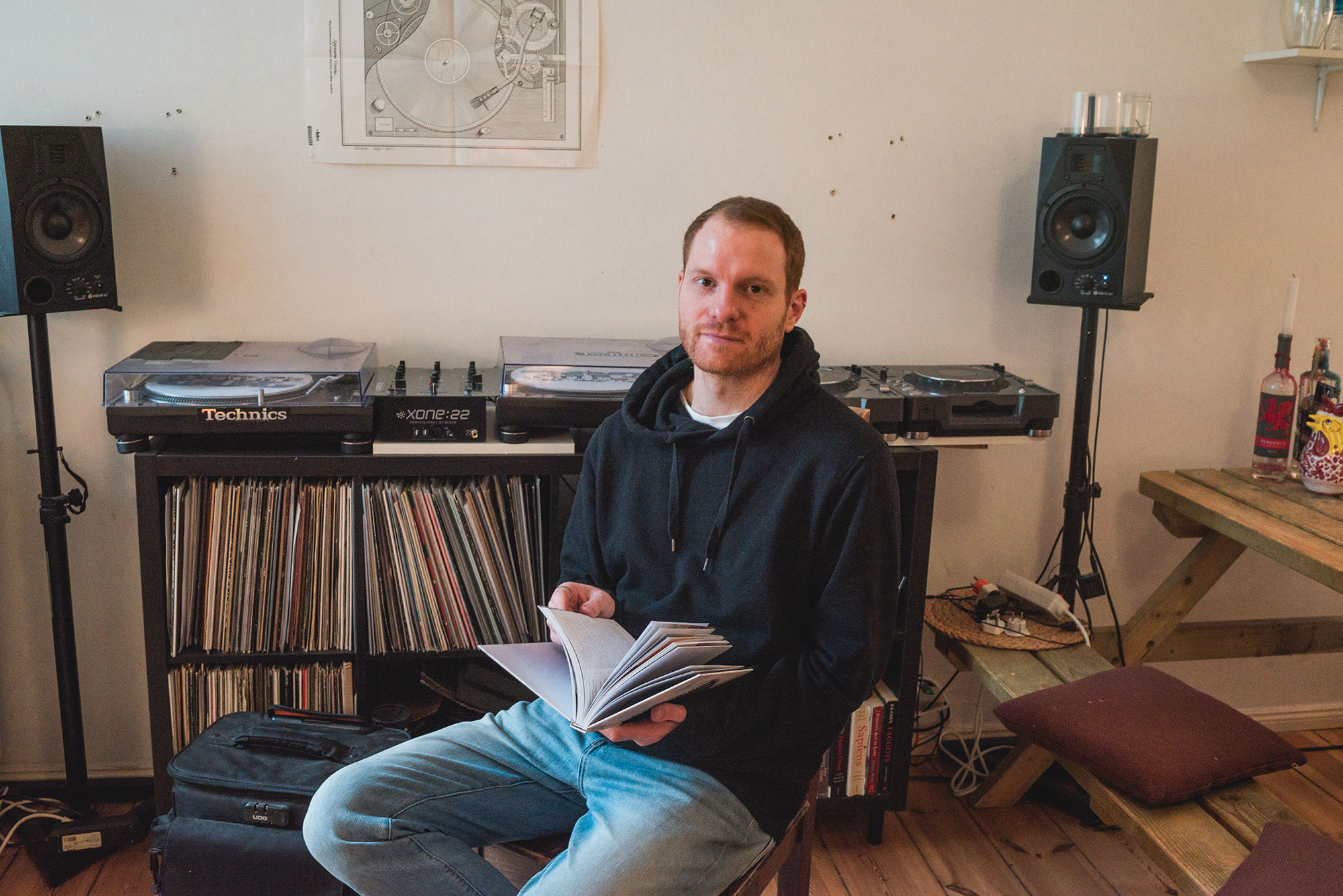 When the pandemic first ground Berlin’s electronic music scene to an agonising halt last year, many of the city’s artists were set adrift with no clear end point in sight. For one Welsh DJ-producer, James Martin, this precarious moment presented an opportunity to finally plate up a project he’d had simmering away in the background: a charity cookbook compiled of recipes contributed by some of the circuit’s finest beatsmiths, from Berlin and beyond.

Featuring dishes from the likes of Marcel Fengler, Aurora Halal and Fantastic Man, Turn The Tables is a marriage of flavours, influences and cuisines that speaks to the very heart of Berlin’s vibrant social makeup. And if that doesn’t whet your appetite, all of the book’s profits go to Open Music Lab, a pioneering non-profit pulling down the barriers many marginalised communities encounter when setting foot into the music industry.

When we went round to photograph James at his place, he treated us to his no-bake chocolate cake recipe from the book – if you’re wondering, yes, it’s outrageously good. We caught up with him later to get the backstory on Turn The Tables, talk about marrying passions with philanthropy, and hear how he was mistaken for his namesake, a certain beefy TV chef of Yorkshire extraction. 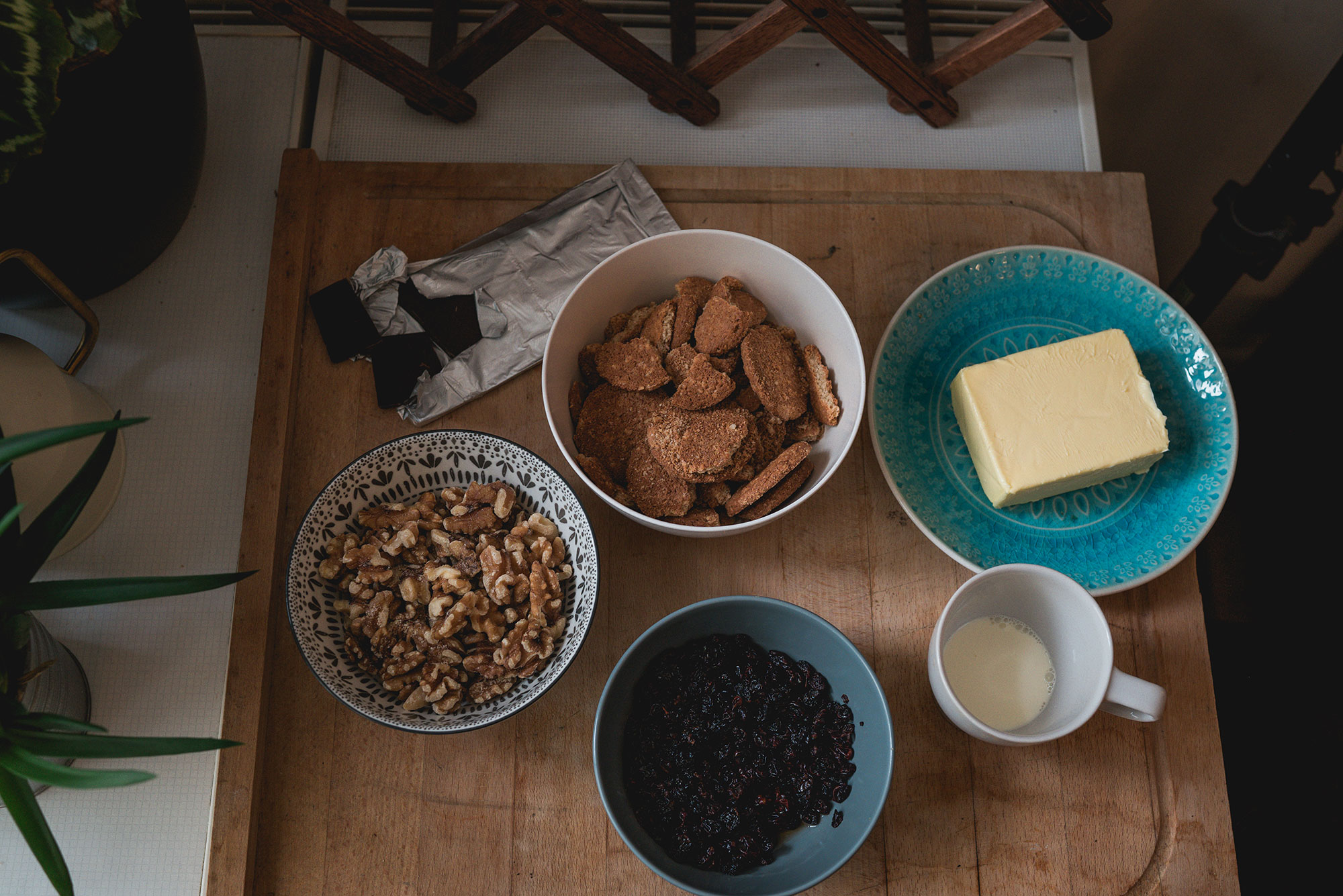 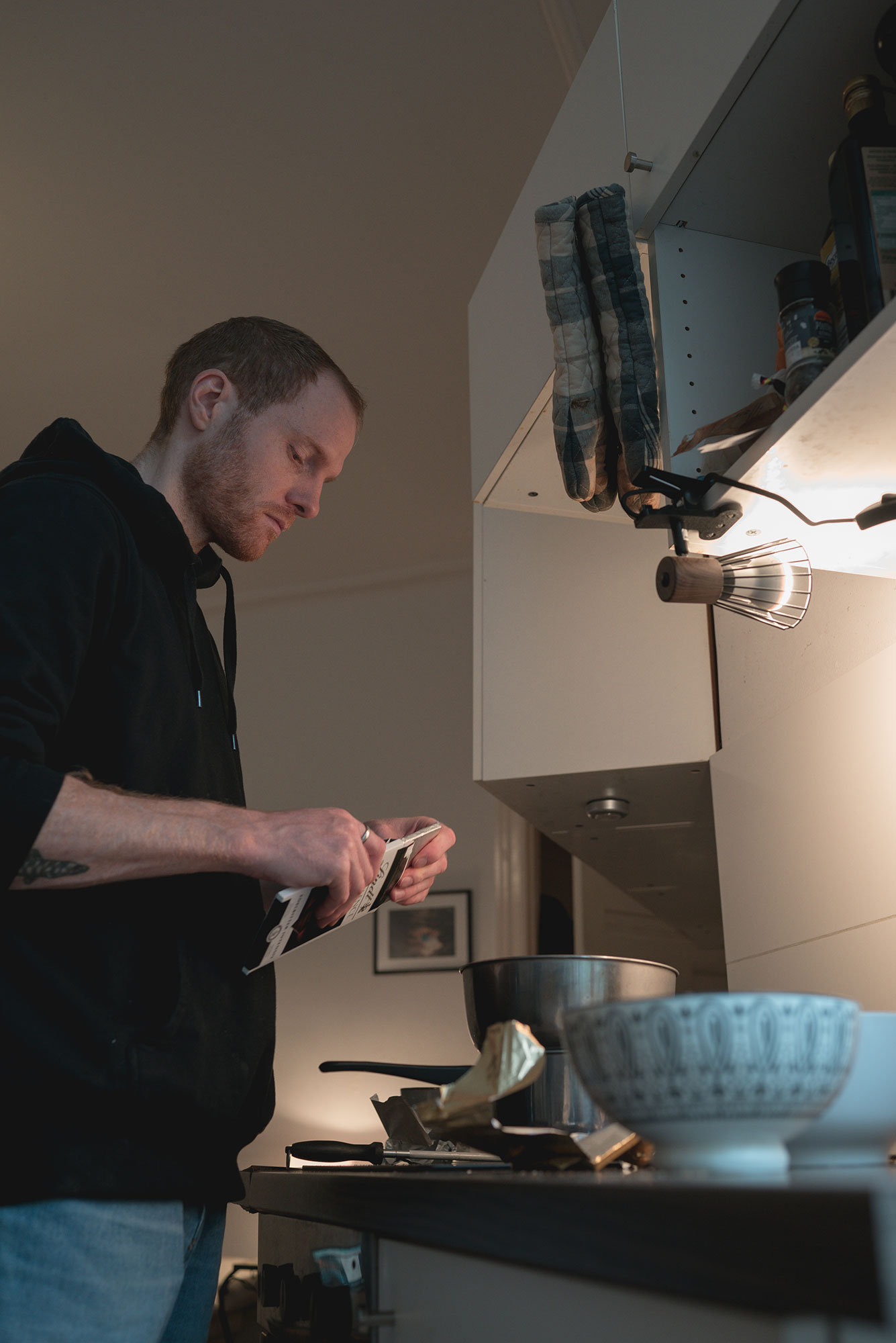 Where are you originally from?
I’m from Wales. Though I was born in Germany to British parents and have lived all over the world, Wales has always been the closest thing to home for me.

How long have you been DJing/producing for?
I’ve been DJing for about thirteen years. I started when I was at University in the UK where I first got really into electronic music, became obsessed with DJing and started running monthly club nights. Though I’ve played around with Ableton on and off for about the same amount of time, I would say I’ve properly been producing for about five years and only started putting releases out in the last year.

How long have you had a passion for food?
I’ve always had a passion for eating but I only started to really get into cooking after moving to Berlin. I discovered how therapeutic it can be and how satisfying it feels to make food for yourself and for others. I love using a variety of ingredients to prepare something tasty and nutritious. Given my travelling background, I’m also into a lot of different food from all over the world and I’m happy to say that this diversity has also translated into the book. 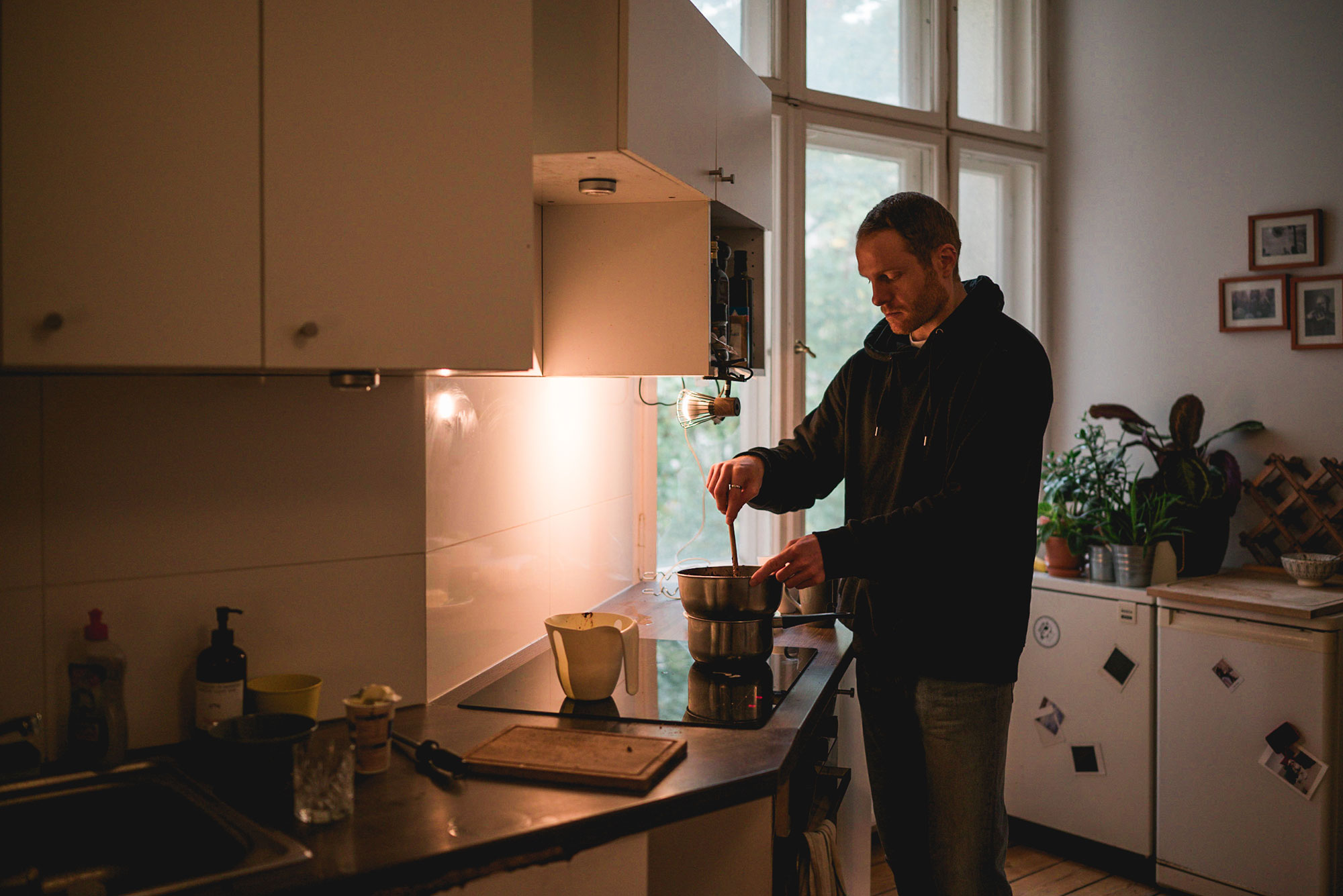 It wasn’t until last year during lockdown when I realised there would be no better time to actually turn the idea into a reality. 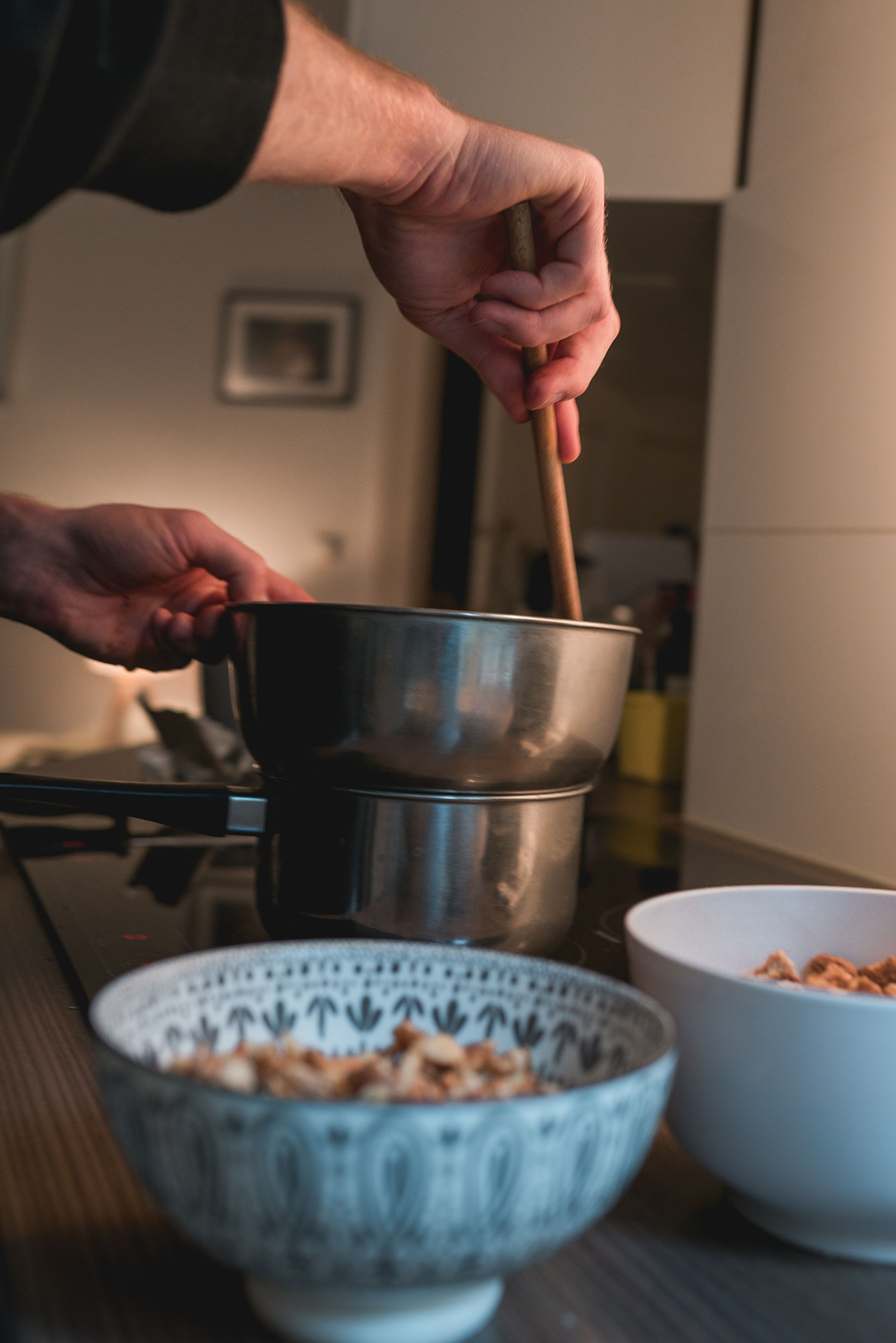 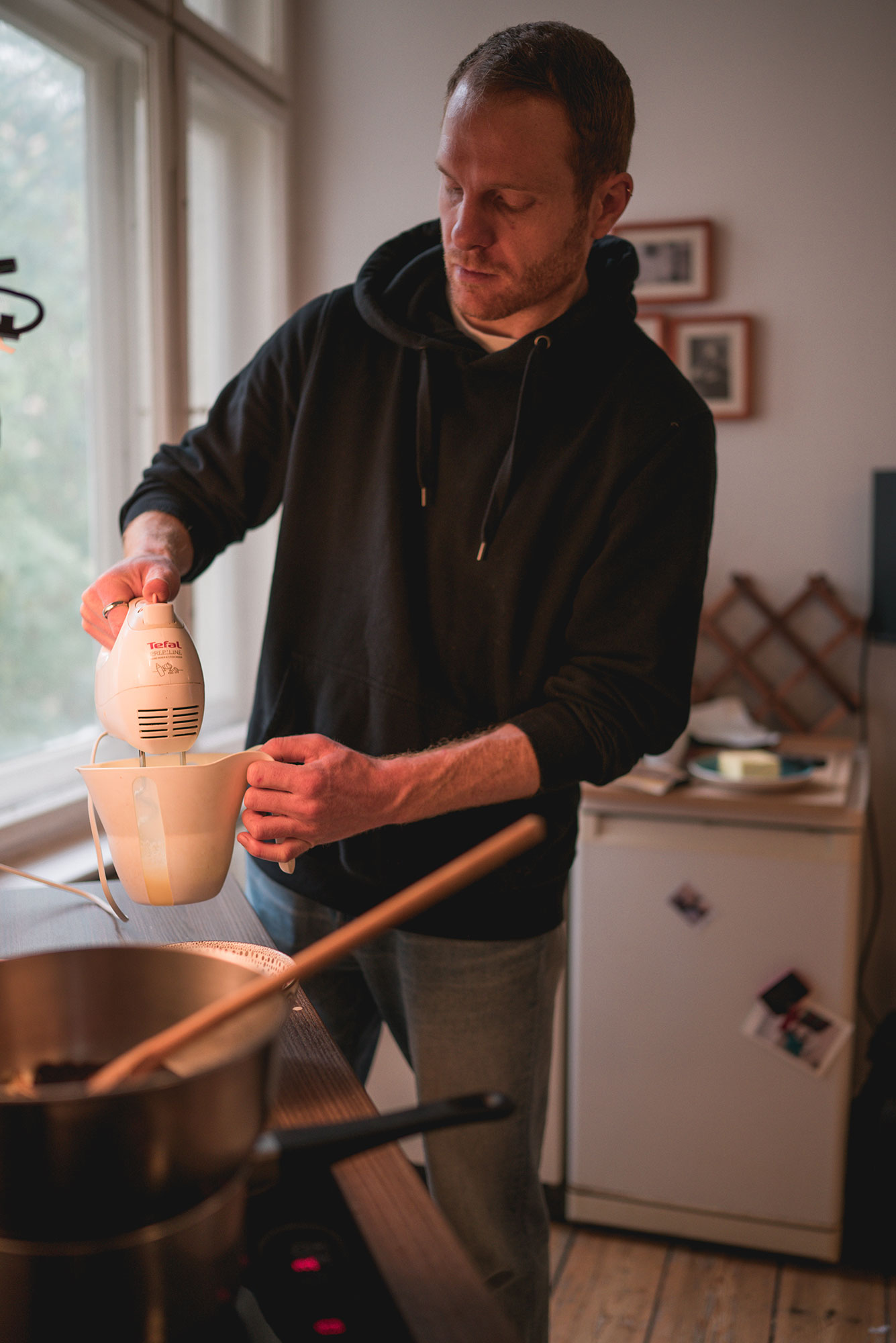 How did the idea for Turn the Tables come about?
Though I certainly don’t think I was the first, it’s an idea I had quite a few years ago and I was actually surprised that nobody had done it before (or at least to my knowledge hadn’t). It wasn’t until last year during lockdown when I realised there would be no better time to actually turn the idea into a reality. My job came to a complete standstill due to Covid and my newly acquired free time really allowed me to get the ball rolling. I got in touch with my old friend Cecily in London who used to work in a publishing house and asked her for some advice. It soon became obvious that we should work on the project together given her book knowledge and design skills, and our shared love for food and music. In hindsight I wouldn’t have been able to complete the project without her and I’m so appreciative of all the work she has done to help materialise the idea. I’d also love to say a huge thank you to Lora Mateeva who has supported the entire process and encouraged me to see the project through until the end.

How did your link to the Open Music Lab (OML) come about and why did you choose to back them?
I’ve known Gaby who started OML for quite a few years, and when it came to choosing the charity OML seemed like an obvious fit given the amazing work they do as a music school as part of Give Something Back to Berlin and the lovely community they have there. I would also always prefer to try and support my friends and extended circle where possible, particularly when they are doing great things, rather than to look further afield. I’ve been involved with music for a long time and I know how exclusive it can be. Tools to make and play music are generally very expensive and I particularly love OML’s efforts to make the music scene more inclusive. They provide teachers, classes, workshops and music gear for those who perhaps were previously unable to afford the equipment to pursue their musical interests.

In general, do you think the pandemic made people more charitable?
I certainly think it’s helped people put things into perspective. With the huge amount of free time that came with the pandemic, I think many people were able to reevaluate their purpose and drive in life and find ways to help local communities and causes in ways that work in tandem with their own passions. 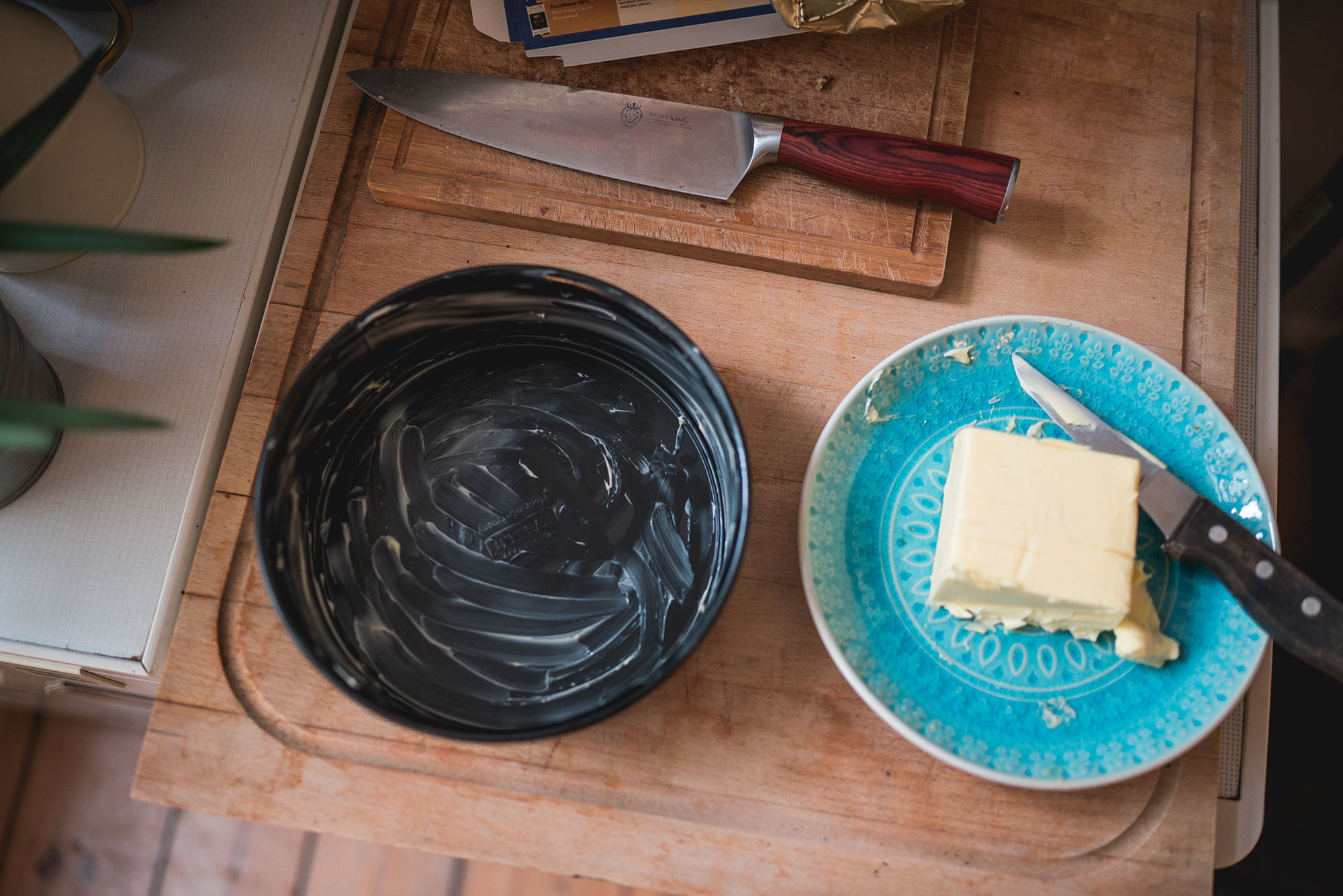 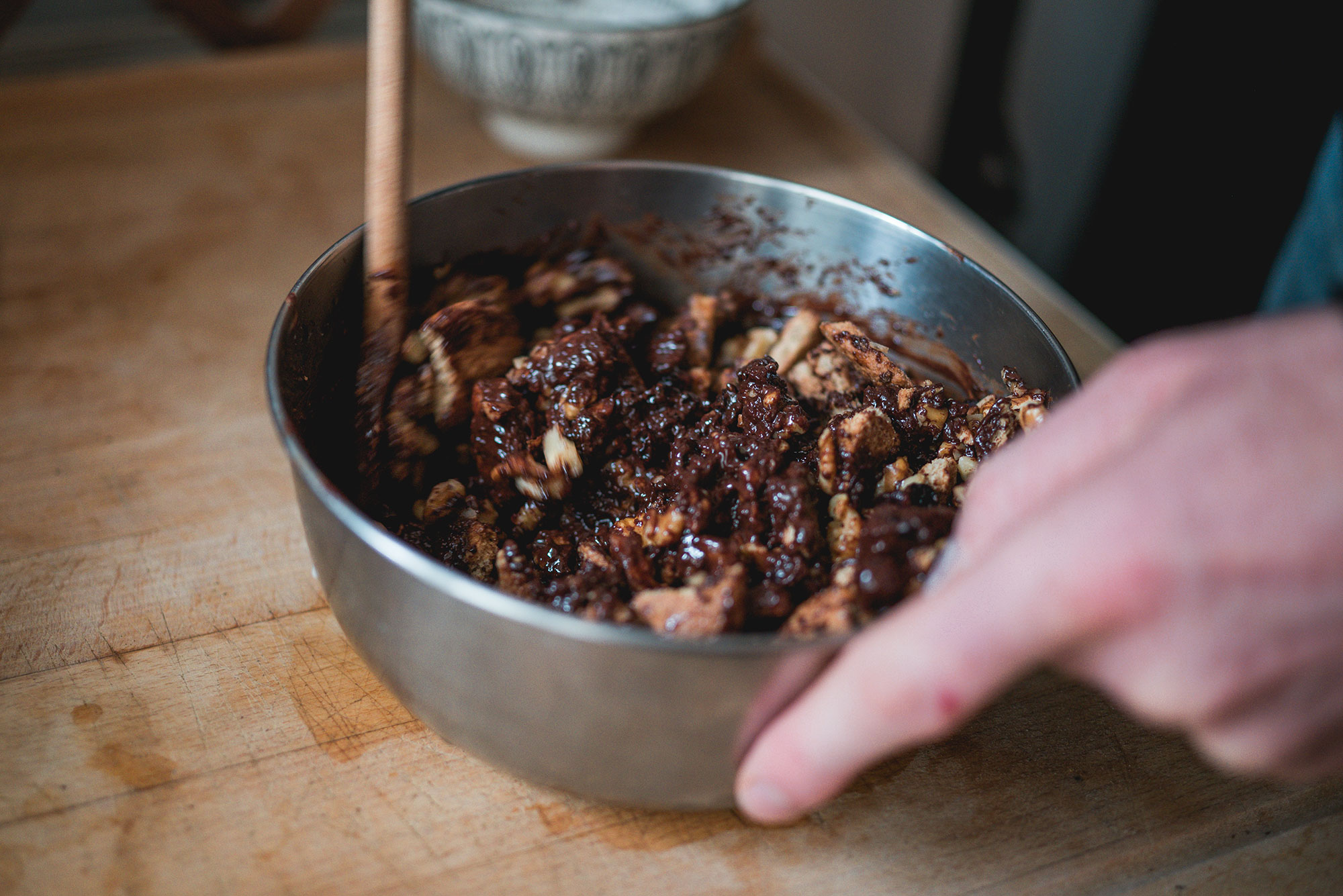 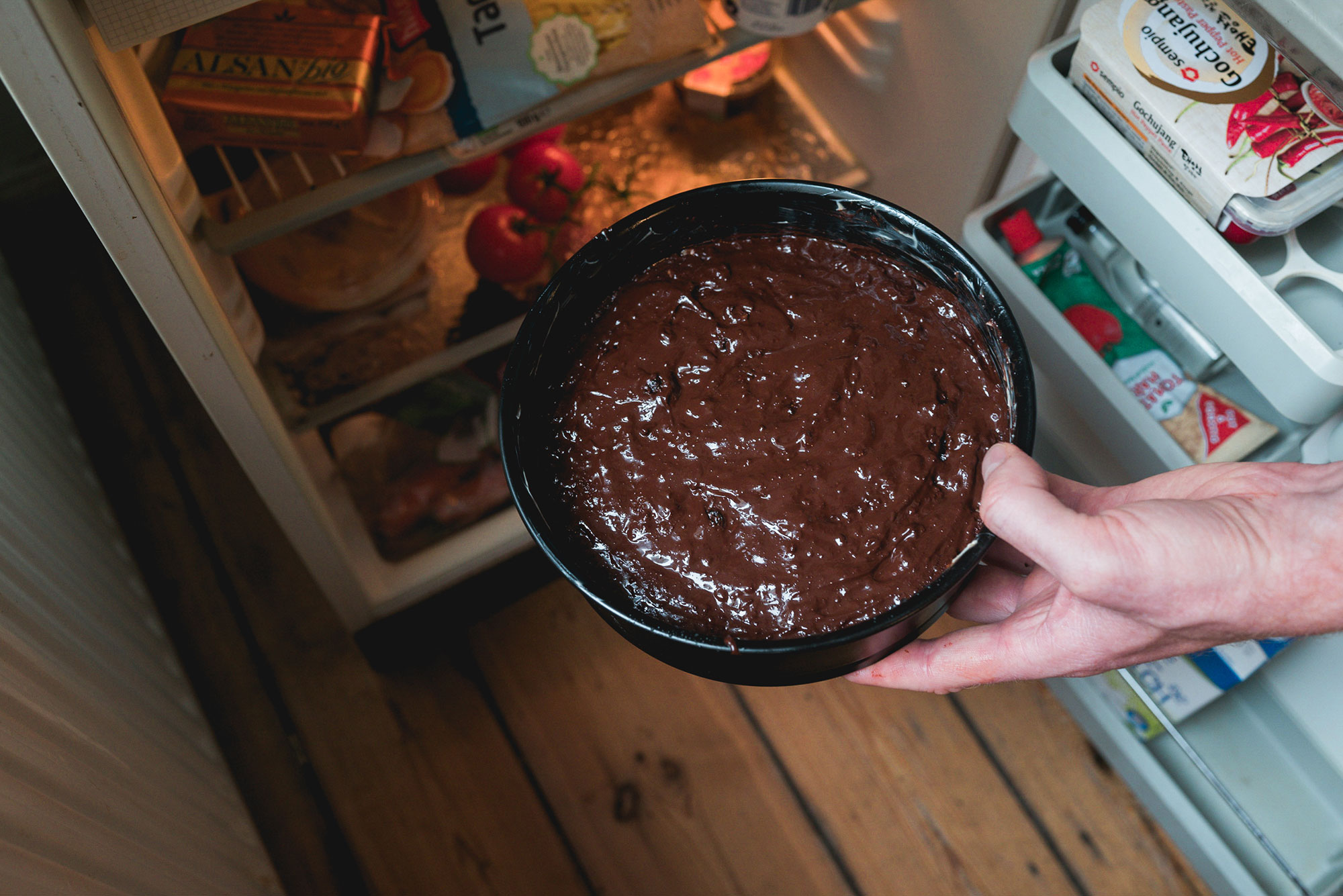 Do you have a favourite recipe from the book?
It’s a tough one because there are some amazing dishes, though I have to say the one that I have had now multiple times is Kangding Ray’s Red Kuri Squash Laksa. It’s a vegan noodle soup inspired by the Southeast Asian classic and the combination of all the spices, kuri squash and roasted shallots is so so good. It would make a super warming and comforting dish for the disastrous Berlin autumn we are having. We also made a huge batch of Gene on Earth’s Orzo with Mushrooms & Feta for the launch party and it was super tasty.

It’s really cool how each contributor has included a little snippet about their recipe (and their background) – does one stand out to you in particular?
I particularly love Spencer Parker’s write-up and backstory, it’s hilarious! “I should have been born Italian… Now, as things turned out, I was born in Croydon, not Capri, and christened Spencer, not Salvatore. BUT! Have no fear—this is no Croydon Carbonara”
I also really love what Telephones wrote about his recipe where he makes the connection between sound and taste in a wonderfully synesthetic description: “If this dish was a well cooked track, it would (or at least should) have an embracing, warm and full-spectrum sound: plenty of bass and rumble, sweet rich lower-mids, crispy and crunchy upper-mids and some tingling twinkles here and there in the highs.”

Do you have any future ideas to leverage the link between music and social projects?
It’s definitely something I’d like to think more about. Since the idea of the project is such a simple one I think there are so many other ways where we can combine creative themes to form something unique and for a good cause. I’d love to think about doing a second volume of the book at some point and I’m currently working on a compilation release that I hope will raise additional funds for OML.

How do you plan to promote the book, and where can people get hold of it?
We are promoting the book through Instagram at and on Facebook with the same handle.

Turn The Tables is available to purchase online at www.turnthetables.de, or for those in Berlin they can also grab the book from one of the pick-up spots which are mentioned on the Instagram page. There are only a limited number of copies so get one while you can. 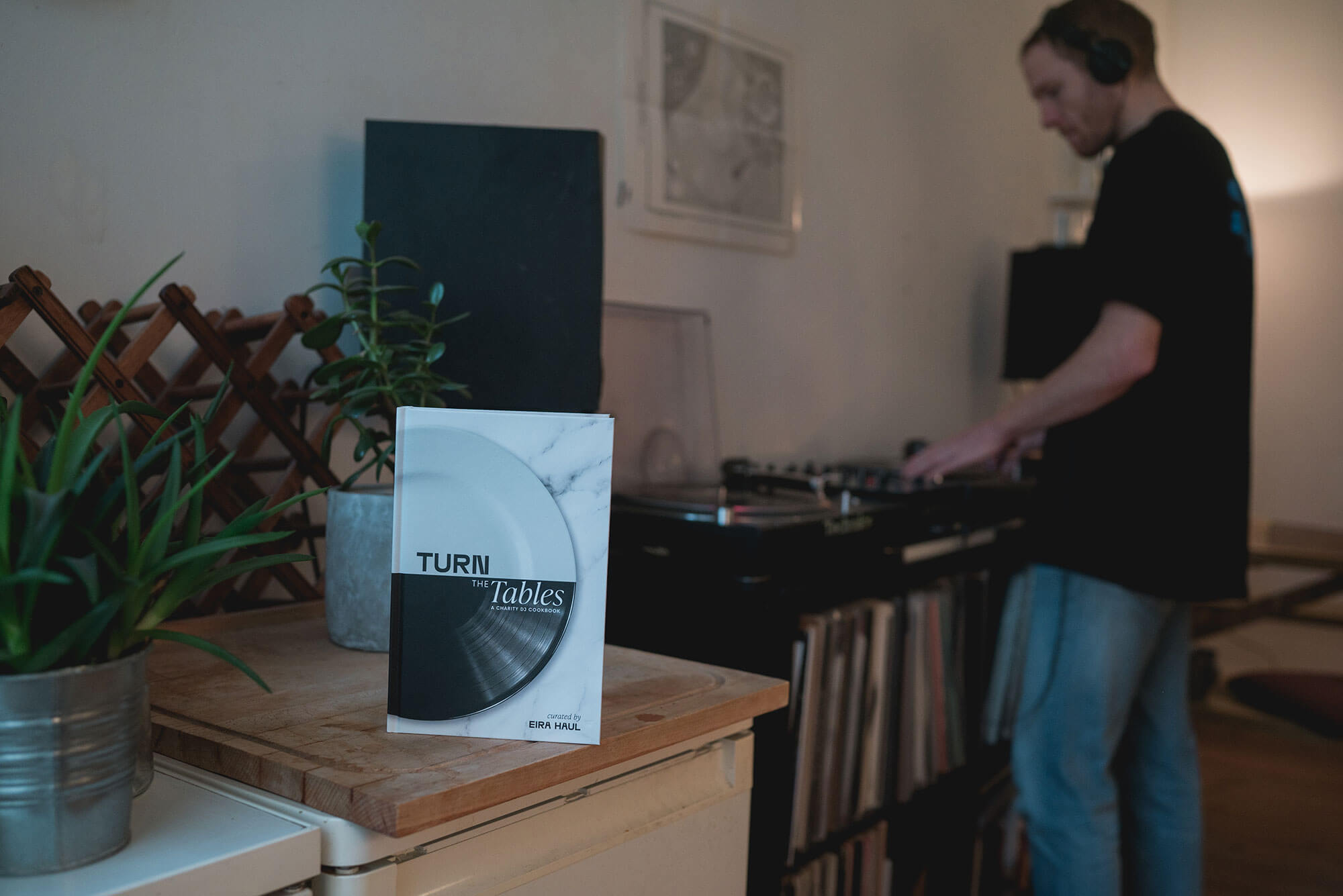