The Street Life of Roc Roc-It 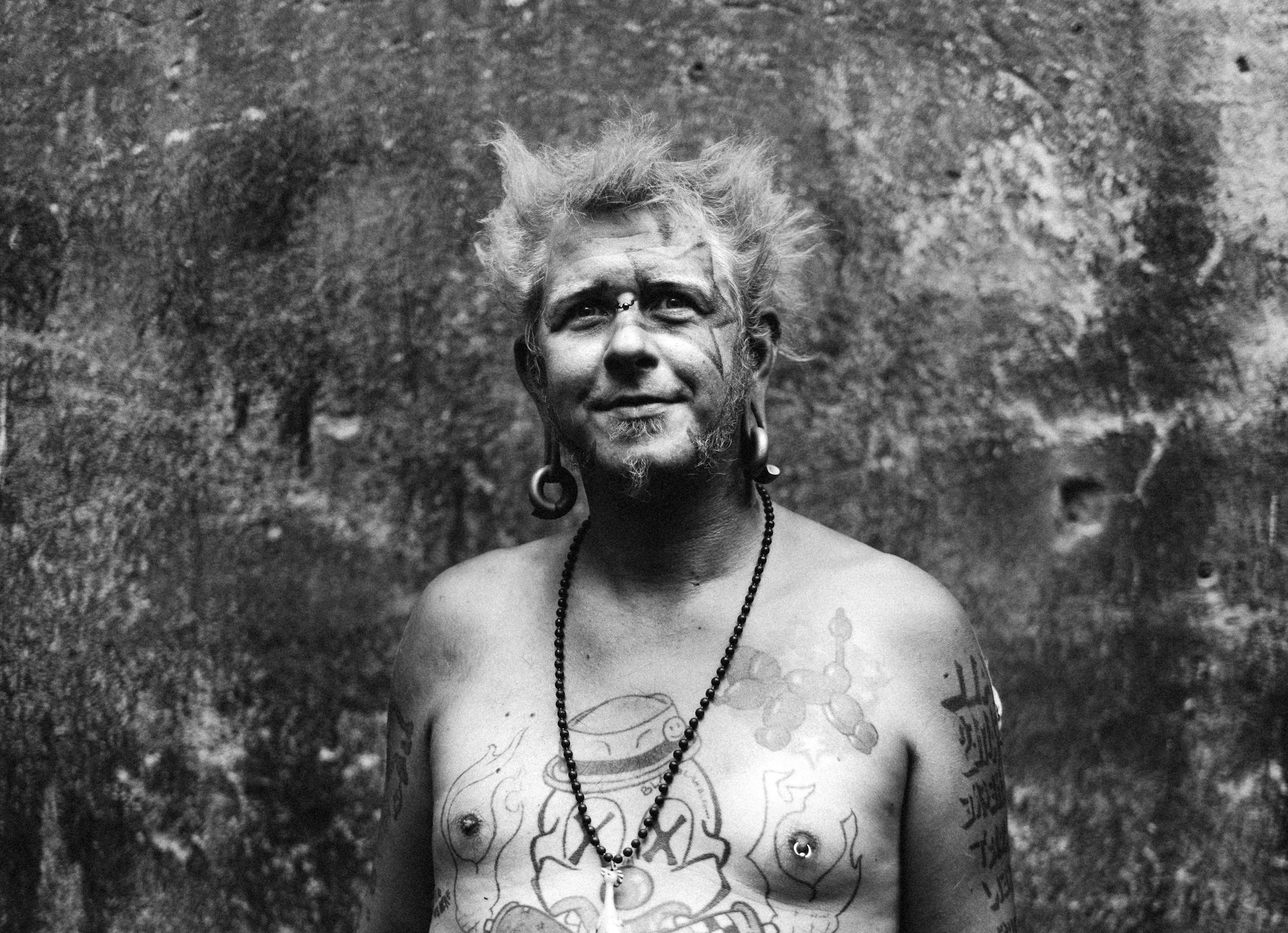 Street performer, cabaret act, circus sideshow, and a true character. Roc Roc-It’s life has taken him across the world on a wild ride with enough stories to fill a book.

On stage he lives up to his name: a rocket firing on all cylinders with the crowd in the palm of his hand, but off stage is an entirely different affair. He’s a livewire, but he also has a real softness, warmth and openness. We met with him in the infamous Berlin Wagenplatz he calls home to hear a little about how he got to where he is today. 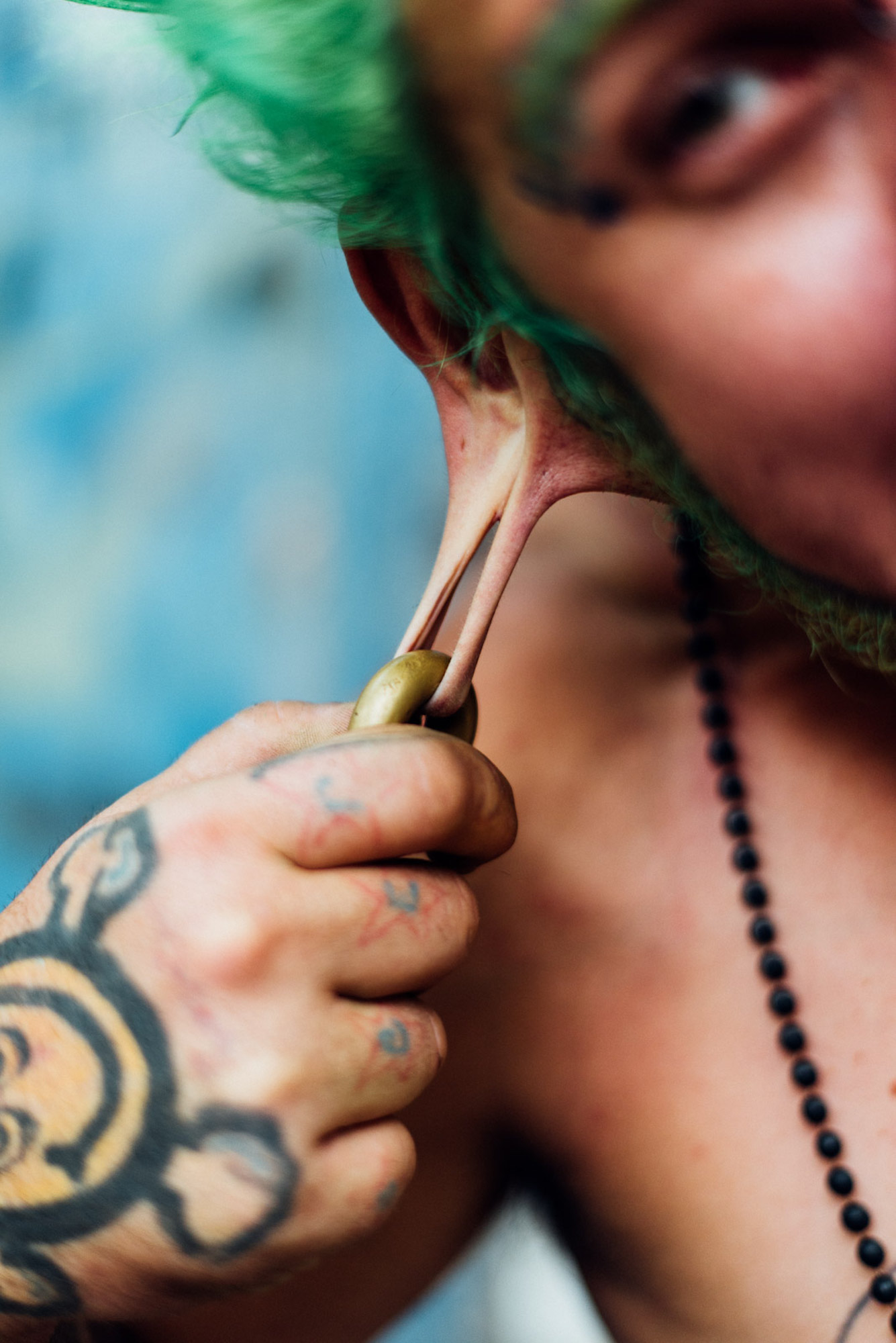 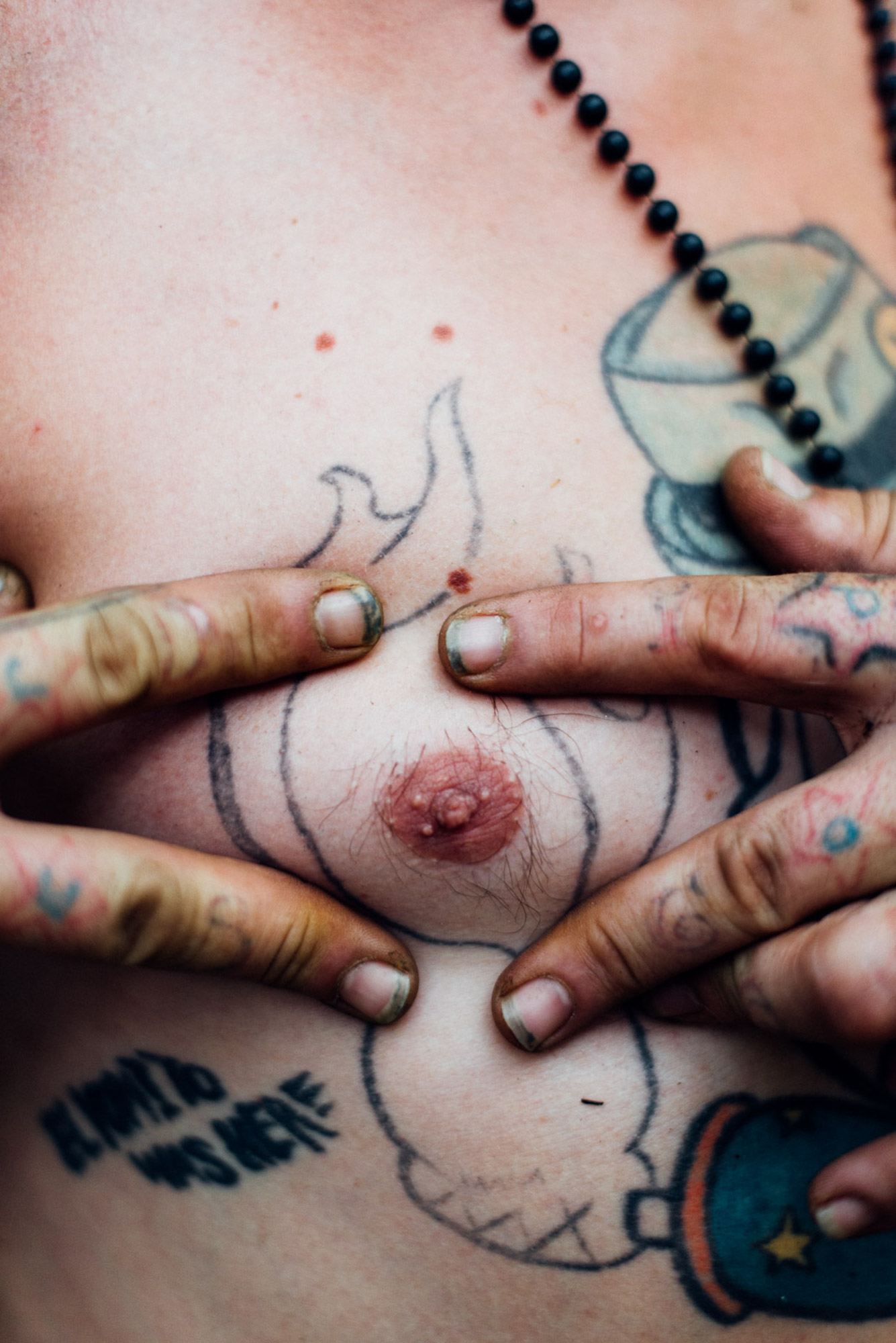 Where are you from originally? I was born in the Black Forest, and grew up close to Cologne. It’s a small town in a little valley – forest on one side and the other side mountains with vineyards, a river in the middle.

When did you move to Berlin? Eight years ago. I heard lots about Berlin. When I was 13, me and my friend were little punk rockers so we decided to run away. There were two ways we could go: to Hamburg or Berlin-Kreuzberg. We went to the highway and hitchhiked, but we didn’t have a clue which way the highway went. In the end we didn’t get to Berlin or Hamburg, but instead ended up somewhere south in a shitty little town. Luckily we knew somebody there and we managed to sleep under their stairs until our parents picked us up. We were ready for a revolution when we were 13. Then we grew up, got girlfriends and started skateboarding. In the early ‘90s we got trapped with the techno and the drugs, and the revolution disappeared a little bit.

How deep into the techno scene did you get? I was a techno and house DJ back in 1993. I played loads of parties, and I thought I didn’t need a house, just a backpack and my record box. The next biggest towns were Bonn and Cologne, and I actually lived on the S-Bahn between them. I always made a point that I would be the last DJ of the night, and after the party I would go to the subway, put my record box down, put my feet up, and go to sleep. Then at the end, somebody would wake me up and tell me it was the last stop, I’d change platforms, take the train back and sleep. I did this for a whole year.

What did you do next? I did a winemaking apprenticeship in the mountains. On my test scores I was the third best winemaker in Germany. From there, I went to the Masters school to become a winemaking master.

And how did you get started as a performer? Some friends of mine were organising a party and wanted a fire breather. I knew a guy, but then I couldn’t get hold of him. I was doing some fire stuff – not fire breathing – but I had promised them a fire breather so I decided to step up and do it. I learned fire breathing for this one show, but the adrenalin from getting everyone riled up got me hooked on performing in front of an audience. 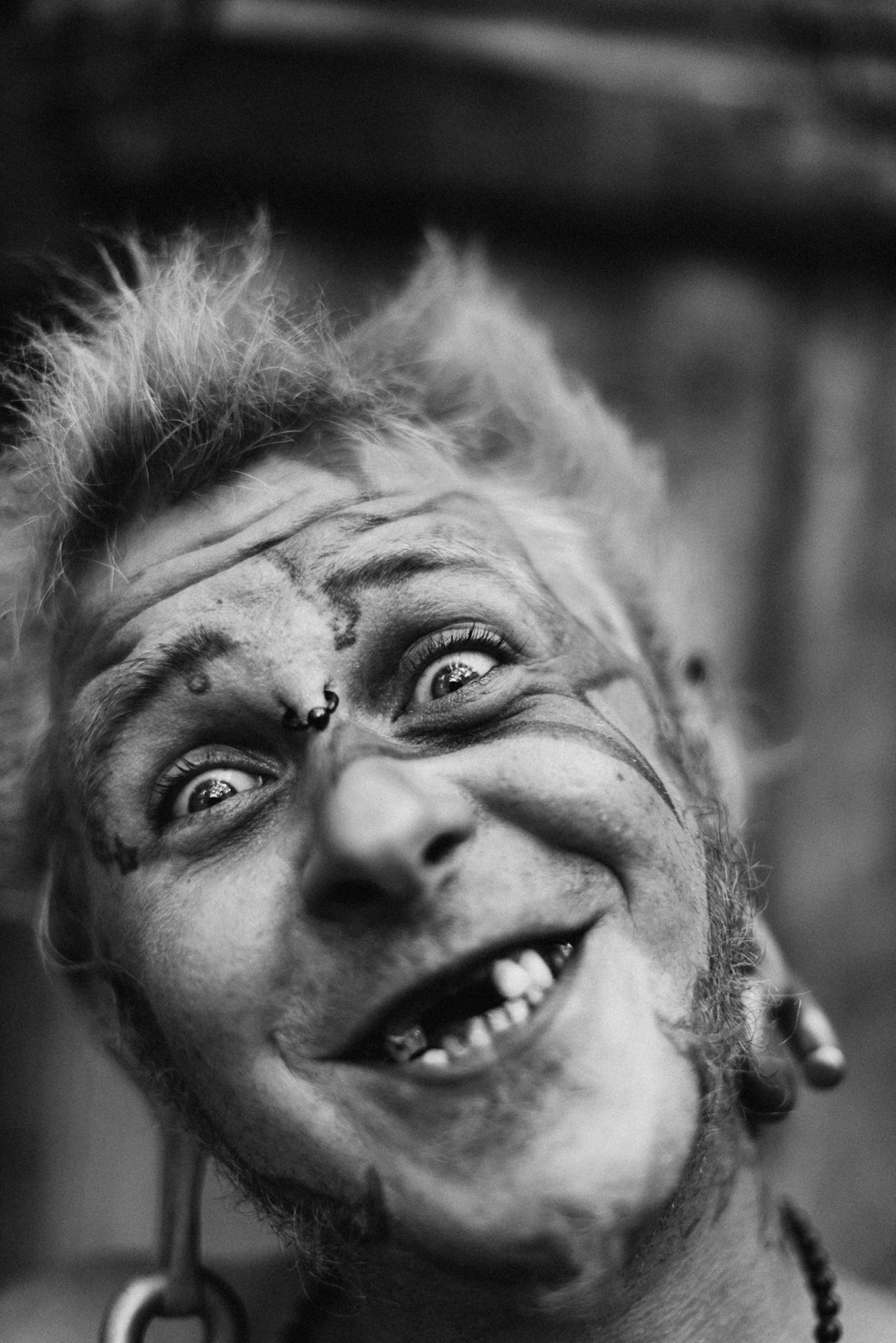 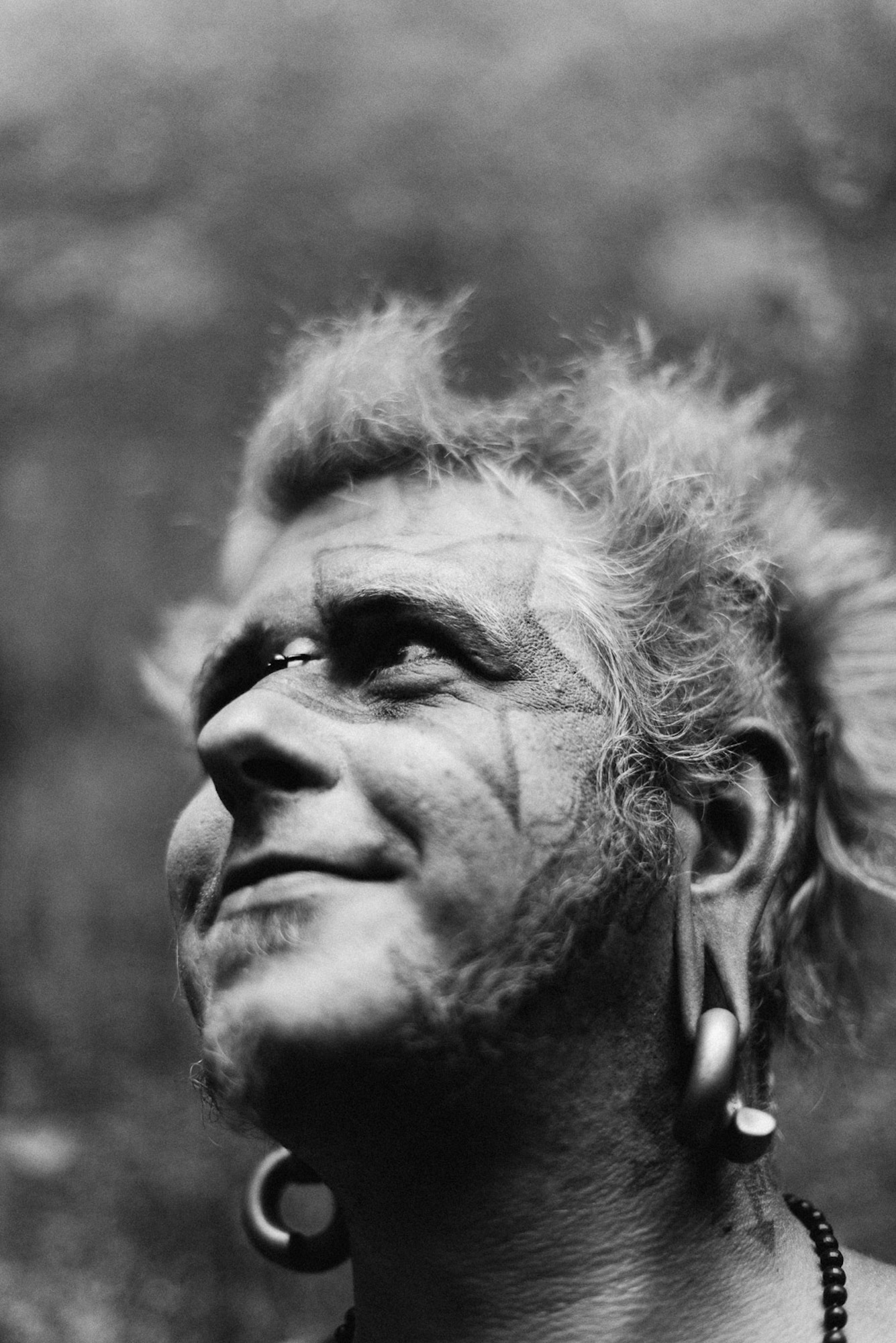 How did you make the change from winemaker to performer? During my summer break from the Masters school I didn’t have any money but I wanted to do something, so I hitchhiked to Barcelona. On the way there, my backpack got stolen and I lost everything except my juggling box and my fire equipment. I was halfway there, so I decided to keep going even though I had no money. I spent the first night sleeping on the roof of a casino as it had nice padded grass and some palm trees. In the morning I woke up and I was like, ‘Fuck, OK, now I’m in Barcelona, I only speak German, I have a few skills but I don’t have a show, I don’t know anybody, but hell, I’m here now so let’s see what’s up’.

I randomly walked through the city and I stumbled upon the Ramblas area. Every 20 metres there was a human statue, a musician, a magician, a street show, a juggler – the whole street. I thought, ‘Man, this is fucking paradise, all these people are making money doing what they love to do, and back home I am walking up and down the hills carrying heavy shit on my back. Fuck that, I’m staying here.’ And that’s what I did. I forgot the Masters school, my apartment, my car, and everything I had back in Germany. All that stuff just wasn’t important anymore, so I stayed in Barcelona.

Where did you live, and how did you get by? I lived on a park bench for the first three months. I met a guy playing didgeridoo, and alongside him I started doing some fire devil stick, fire breathing and fire eating. It wasn’t a real show, just didgeridoo, music and fire, but we made enough money to get some breakfast, beers and tobacco. We met a lot of people doing other shows and from this I learned little by little. You meet other people and you exchange things. Somebody teaches you a trick, you teach that person a trick, or you tell that person a joke they can do in their show. It was a big interaction of people. We were a really nice crowd of 50 street performers who were all friends and who were hanging out all day. There was no competition, everybody made enough money, and everybody had a good time. I was like, ‘Forget working in a vineyard, this is what I’m doing from now on.’ That’s 15 years ago and I don’t regret a single minute.

Where did you go after the park bench? I met another street performer who was living in a squat; he said he was leaving and his room was free. I didn’t actually know anything about squatting before that, I didn’t have any idea of the political scene, but from there I met people and I started slowly understanding. Then I carried on and squatted other buildings. 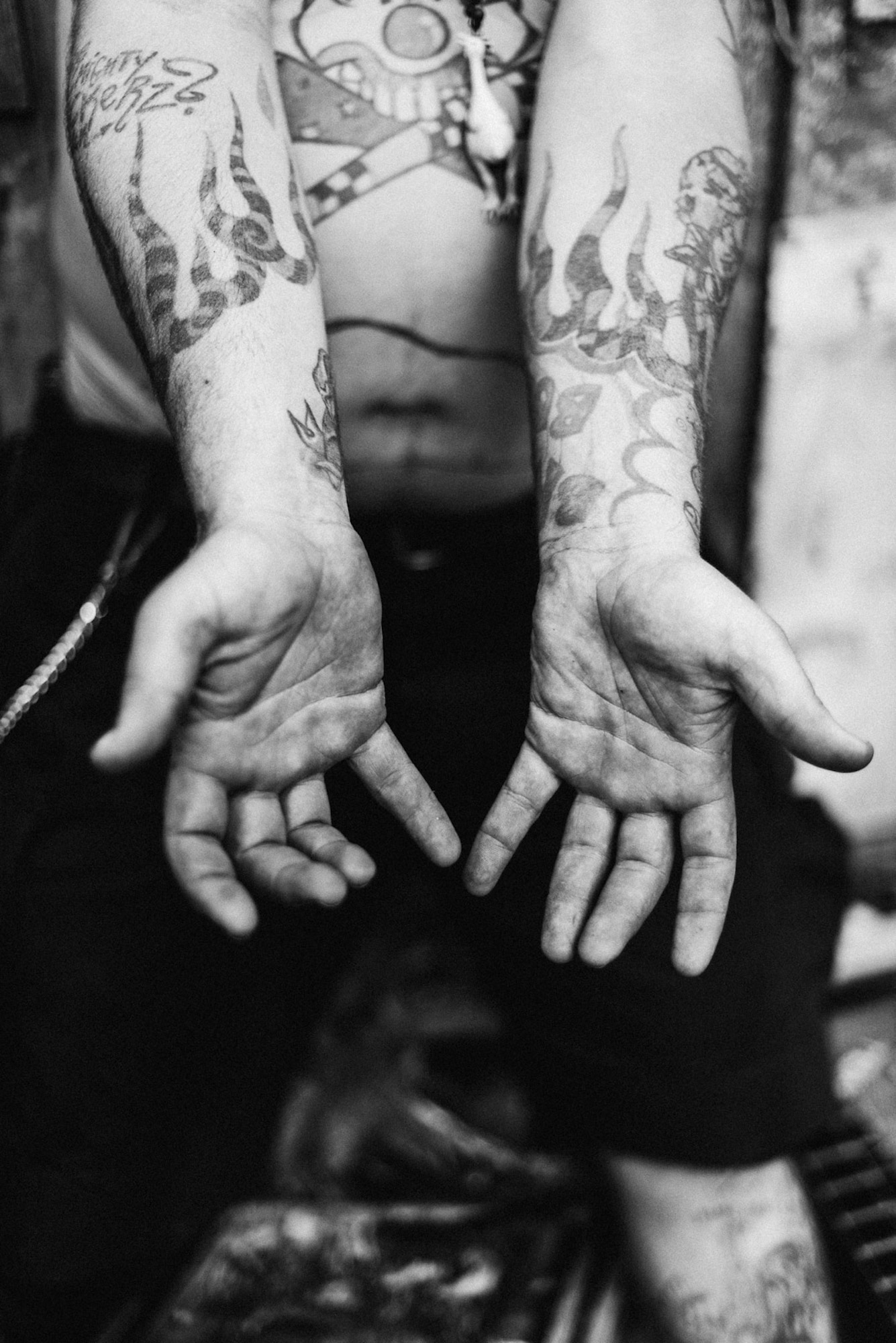 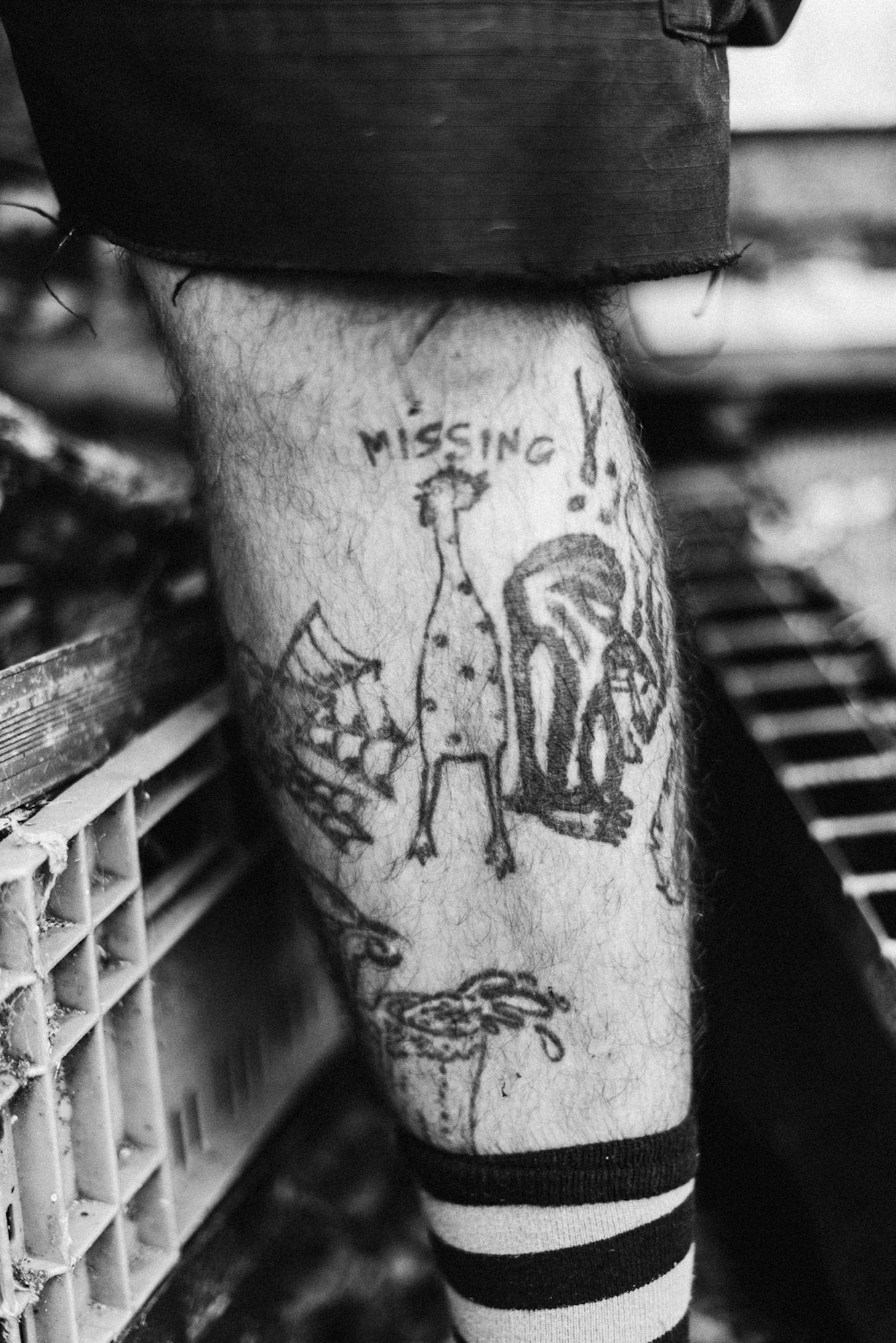 When did you start getting tattooed? I did my first one when I was 13 using a compass and the ink cartridge from my pen to make a little anarchy symbol on my hand, stick and poke style. The ink was shit and I didn’t go deep enough so it disappeared after a year, but I had the clear picture of myself in the future in my head, being completely covered in tattoos from top to bottom. My idea was to look like the outside of a fridge and the inside of a public toilet. So like a bunch of magnets stuck to the outside of the fridge, and people writing silly shit with marker pen on the inside of a public toilet. That was my whole idea of how I wanted to look. I think I did a really good job!

Where do you get your tattoos? From really good friends of mine. Many are from friends who have never done a tattoo in their life, they’re not even good with drawing! I just give them my tattoo machine and say, “I really like you, please paint on me.” All the bits are more like memories of people than an art collection.

What’s the story behind your rubber chicken tattoo? I got that on the TV Show Miami Ink when they came to the Coney Island Circus Sideshow. The rubber chicken I had been using in my act had gone missing. In America they have milk cartons with missing children on them, so I got this tattoo of a missing rubber chicken. I started crying on camera and said, “If anybody knows anything about my chicken, please call the sideshow, I miss him!” One week later there was a mountain of boxes addressed to me, and each box had a rubber chicken inside. I had this giant pile of rubber chickens that had been sent by people from all over the country, it was fucking amazing. 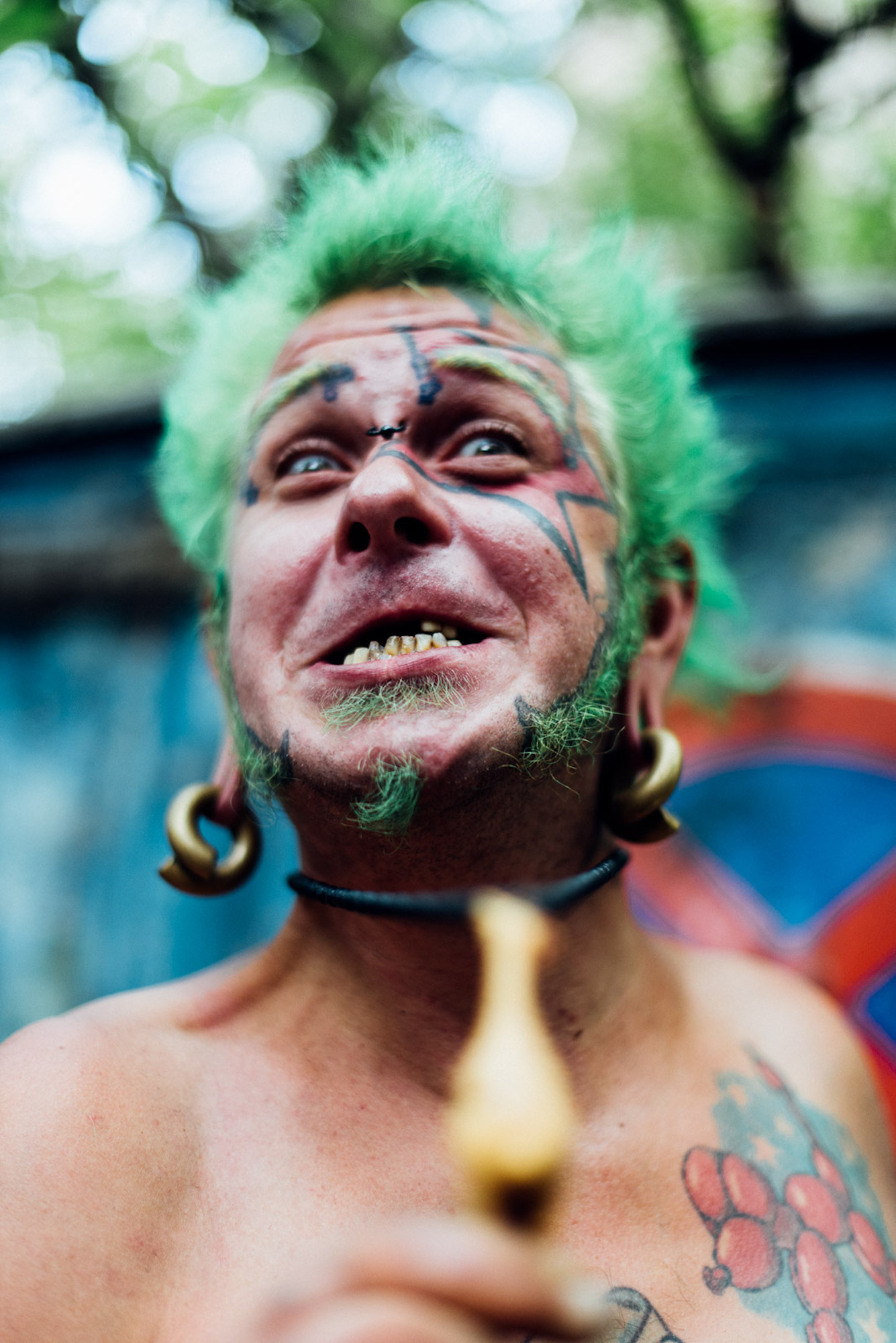 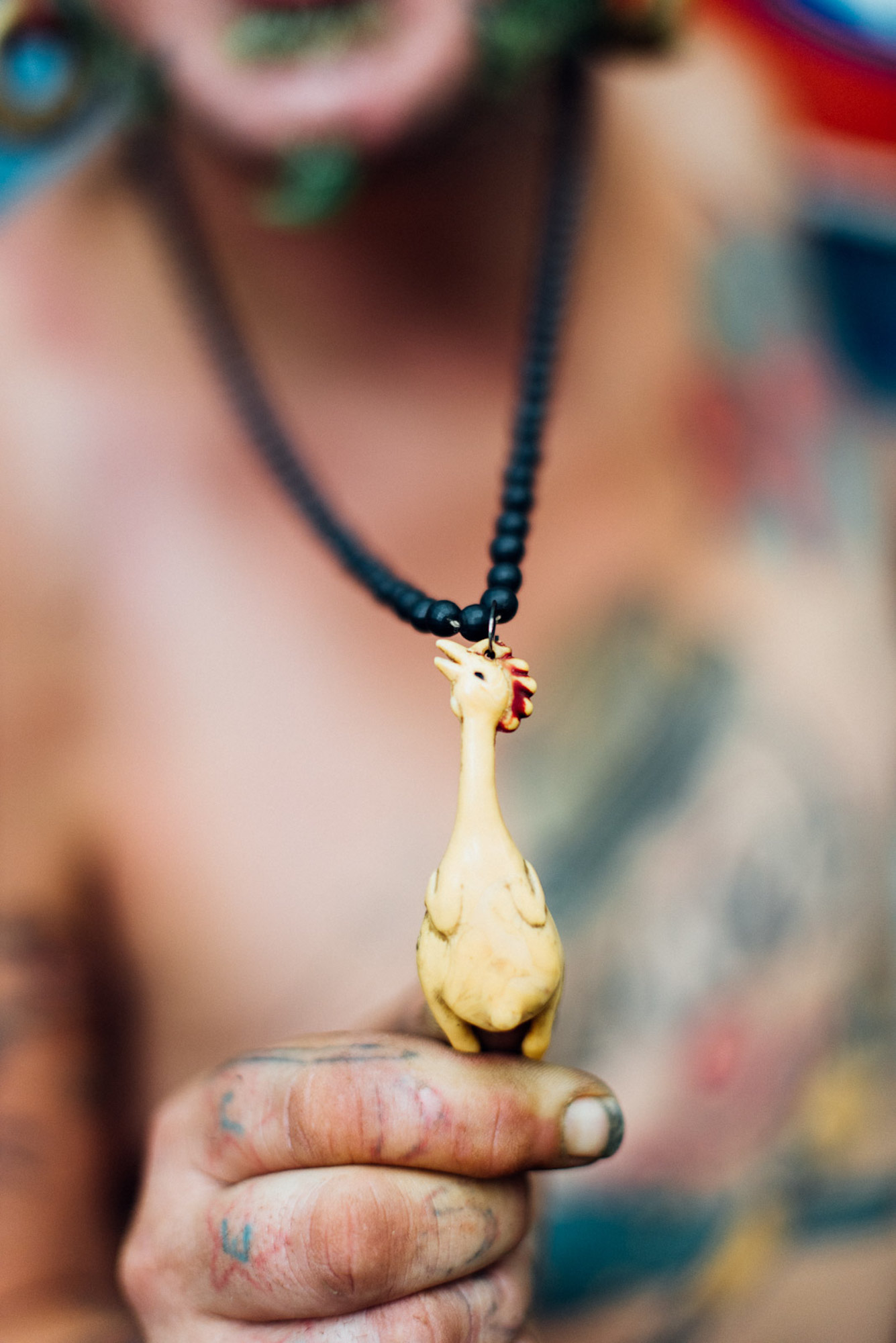 How did you end up as part of the Coney Island Circus Sideshow? I was on a trip to the States, and during my last two weeks in New Orleans I split up with my girlfriend. The police were really on my ass and I couldn’t make any money. I really liked New Orleans – the music, the artists, the circus community are great – but the situation was against me. I had friends living in New York that I was squatting with in Barcelona, so I thought I would visit. On the last day of my visa I decided to go to Coney Island and do a show on the boardwalk, just to have one nice show before I left. I stopped in front of the Sideshow and the boss came out. I had a suitcase and on the side of it was written ‘The Roc-it Circus Sideshow’. He came up to me and said, “Oh, you do sideshow, what do you do?” I told him what I did, that my flight was in five hours but I would love to do my thing on his stage. He said, “OK” and took me backstage.

I had ten minutes before they said, “It’s your turn.” I got the audience really loud and rowdy and had a great show. Afterwards the boss said, “So, your flight is later. That’s a real bummer because I would hire you for the summer.” That was the moment I had to decide. I could either remember the US as a really shit time and go home, or forget the flight, stay, and create something. I thought about that moment on stage and how awesome it was, about the history of that sideshow, and I decided to stay. That turned into three years, doing over 1,000 shows a year. 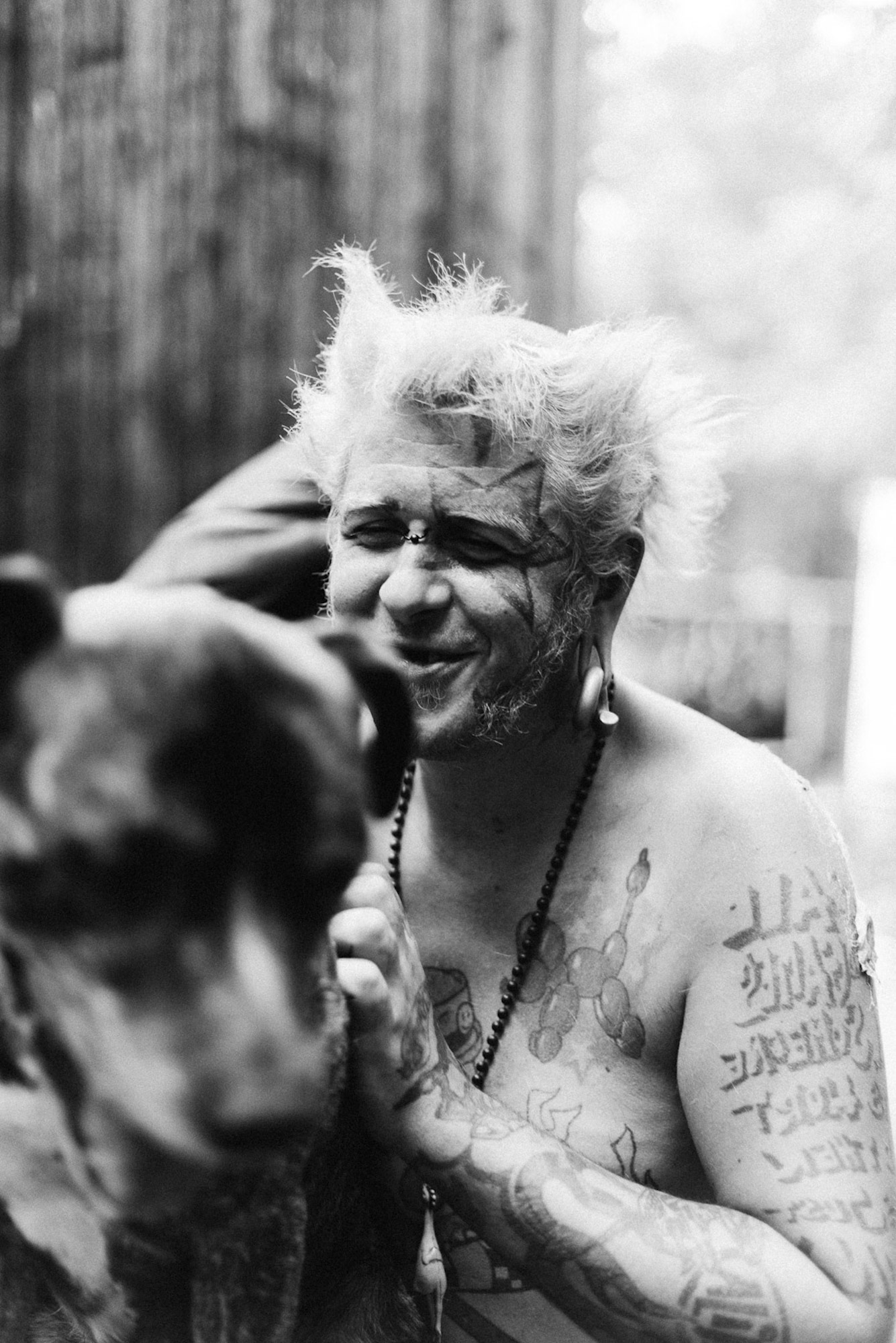 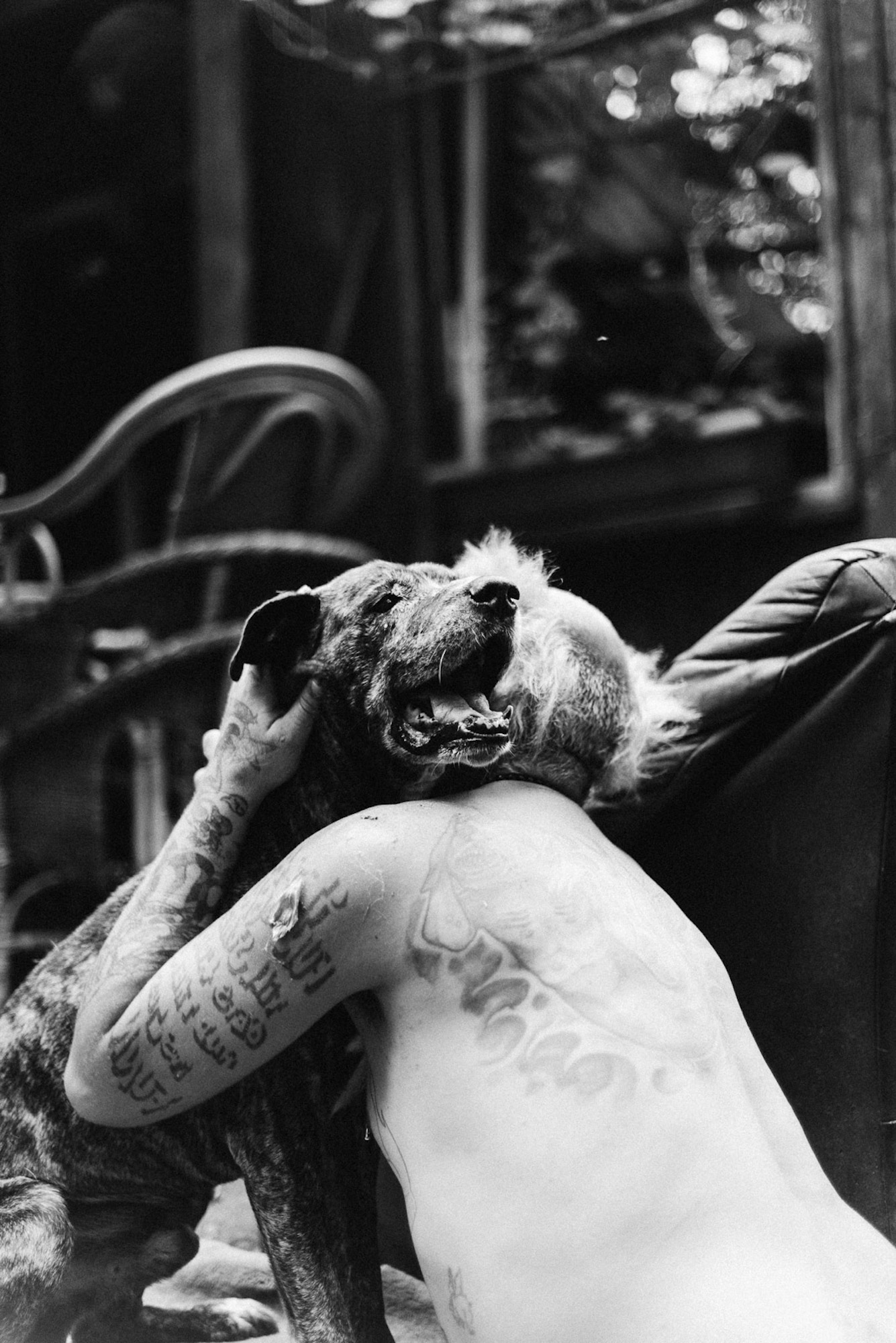 What about Berlin, have you noticed it changing much over the eight years you have lived here? The streets are getting more complicated. The police and Ordnungsamt are coming down on amplifiers, saying you can’t do shows at certain times in certain places, that the audience is too big. It’s the stuff I’ve seen in many other cities in Europe, and now in Berlin. When I arrived here there were absolutely no rules. You could come with a big flamethrower and massive speakers to any place you want and do a show.

What are you working on next? Next month I’m booked in Barcelona as a birthday clown for a three-year-old boy! I do anything: street performance, techno festivals, punk rock shows, cabarets, burlesque, theatre, circus, freak shows, whatever! It’s not circus or sideshow, it’s in between, and that’s why it fits to absolutely every audience.

TYou can catch Roc performing with the Squiddling Brothers Circus Sideshow on Thursday 26 January at KvU, Saturday 28 January at Kopi and Tuesday 31 January at Eschschloraque. 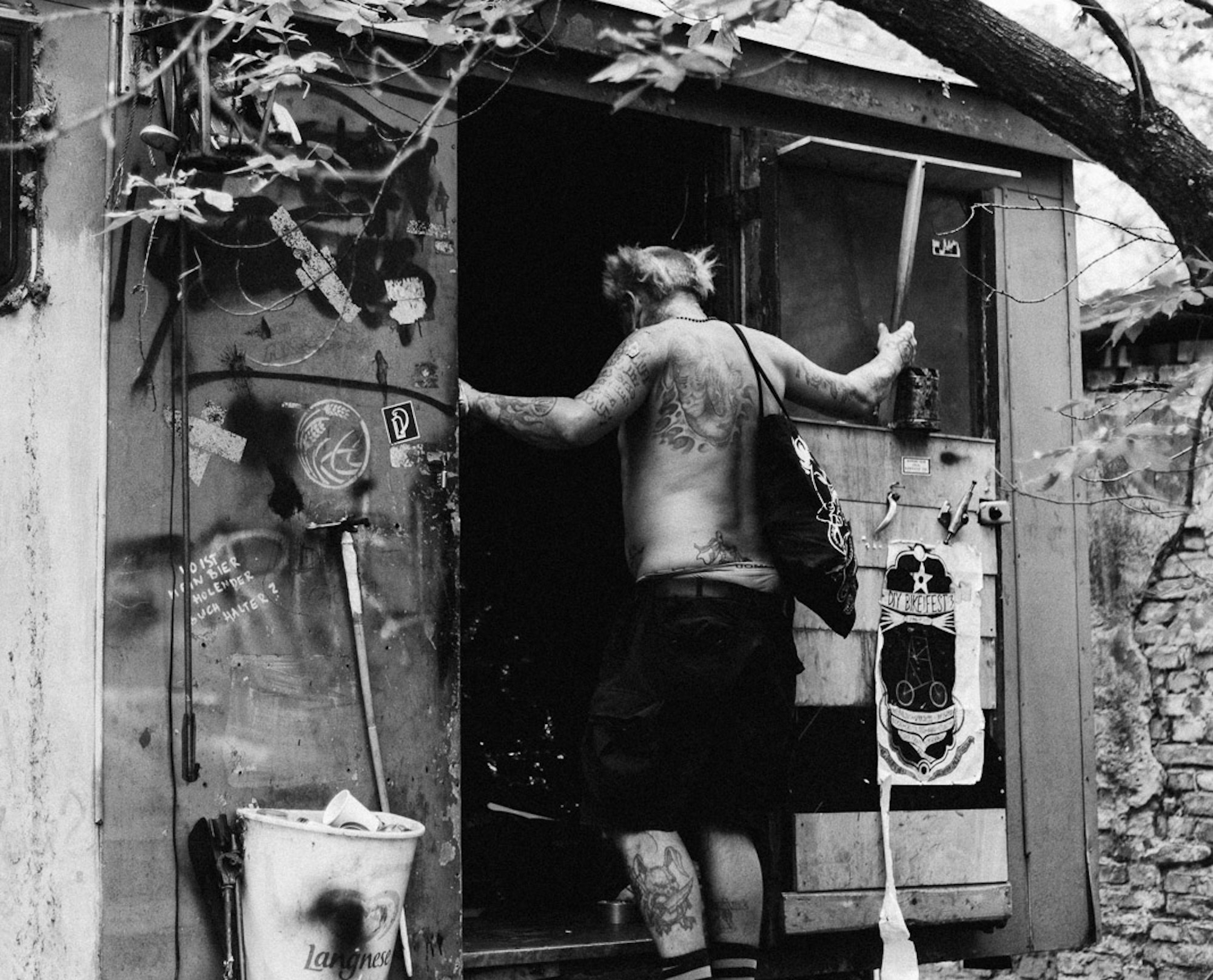