The Papa of Kotti

Meet Seydo Uzun, the kiosk counsellor for those in need 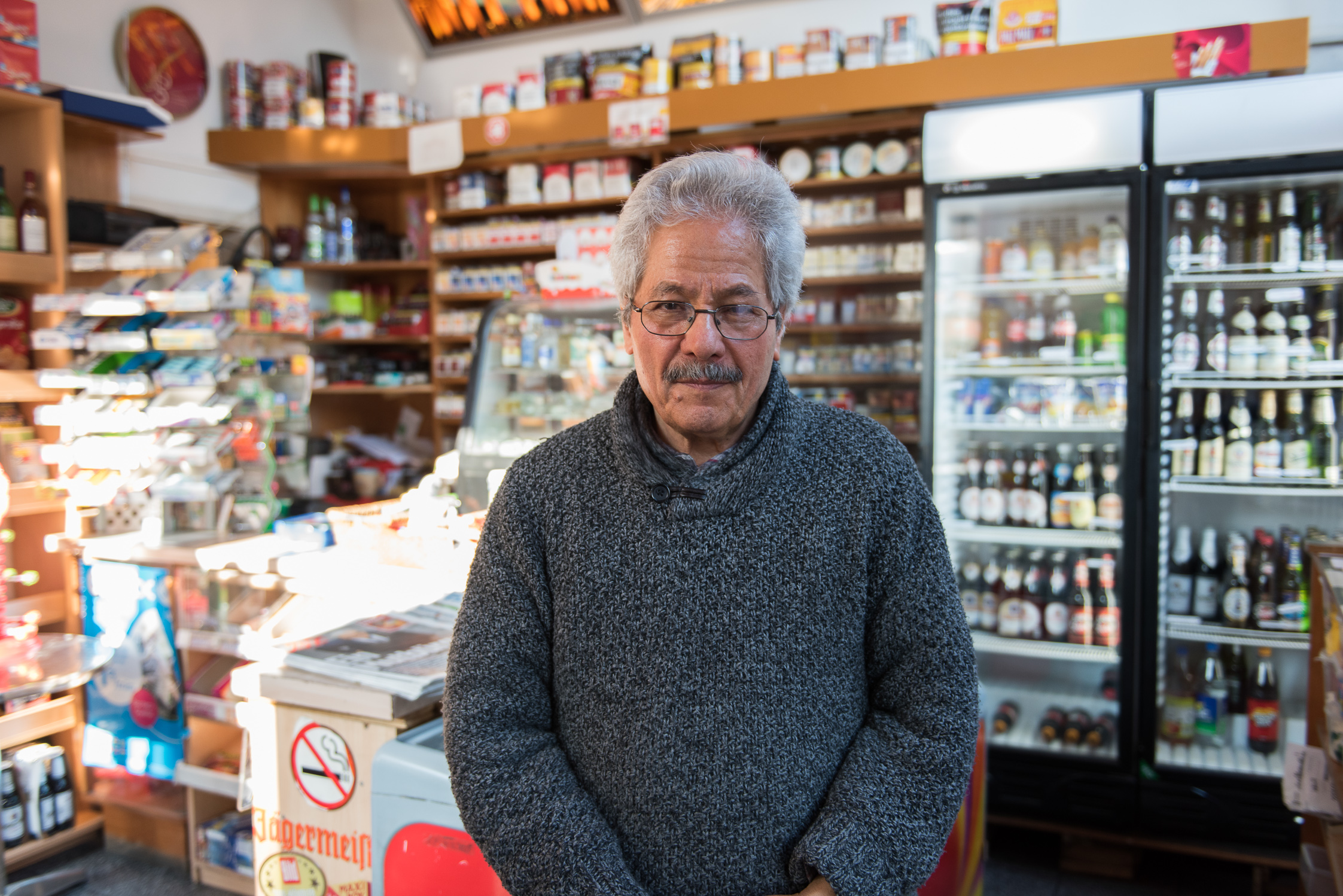 He’s just doing his job: serving people from behind the counter of his small shop at Kottbusser Tor. He knows his core customers by name, and tries his best to help those in need. Meet Seydo Uzun, the ‘Papa’ of Kotti.

As you exit the U8 on the corner of Reichenberger Straße and Dresdener Straße, you almost inevitably bump into Kiosk am Kotti, one of the small Spätis of the area. Yet for many, Kiosk am Kotti is so much more than that. The owner, Seydo Uzun, stands behind the counter, peering over the top of his glasses that are pushed down to the edge of his nose. While the colour of his hair may reveal that he’s just turned 70, the sparkle in his eyes and his half smile give him an almost boyish look. Speaking with him, one is reminded of the value in even the smallest interactions, and how exchanging simple pleasantries when buying a newspaper offers you the chance to connect with someone remarkable.

Seydo Uzun was born and raised in Malatya, Turkey, the biggest apricot-producing region of the country. At home, they spoke Kurdish with his family; he only learned Turkish once he went to school. “We were told that in order to achieve something, we need to speak Turkish, just as the children of migrants in Germany need to learn German! It’s extremely important. Their native tongues won’t disappear if they keep speaking at home, but to study the language of the country we live in is crucial!” he says, and that’s why he thought it was important for he and his family to learn German when they arrived in the country in 1972. Seydo first worked for a railway company, but about 11 years ago he felt like it was time for a change. He was growing older, and “living on Hartz IV is not my style so it wasn’t an option.” So, he decided to open a kiosk. It was easier to get a shop space back then, and in 2006 Kiosk am Kotti opened its doors to customers. The neighbourhood was always very controversial, Seydo tells us, but the crowds have changed several times through the years. 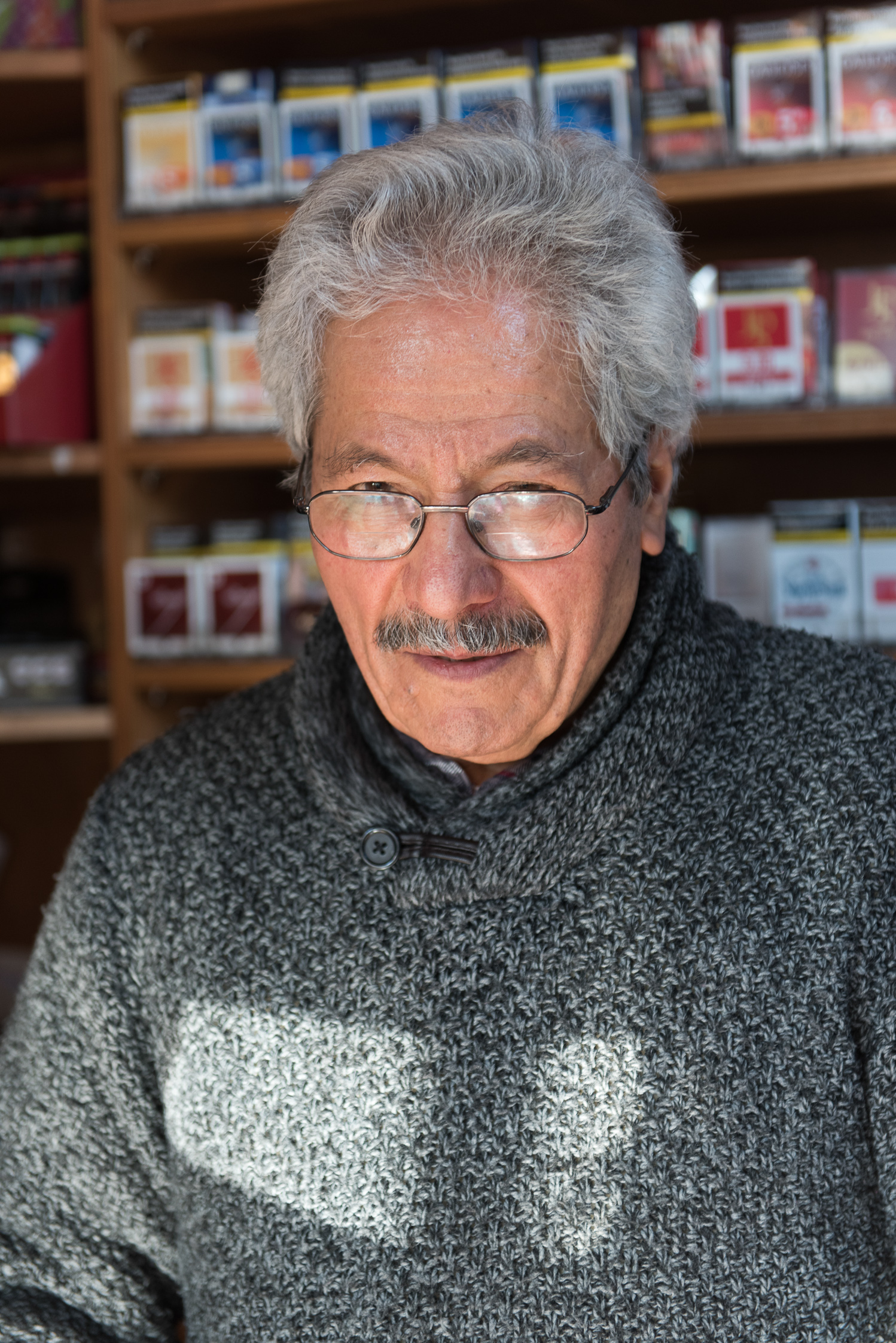 If I see someone stealing from me, I ask them not to do it again. For that one time, I tell them it was a gift but the next time they have to pay.

Many customers greet Seydo as ‘Papa’ when they walk through the door, and often spend quite a while talking to him, drinking their €1 filter coffee, or getting some beer, tobacco, a small vodka, a newspaper. He is friend and counsellor to many troubled people around the station, the calm father figure that they are perhaps missing in their own lives.

“A lot has happened here in the past years of course, but I believe that most of the people fighting with addictions are actually just affected people. I want to emphasise that: these people are affected by our society. They are the victims of a system, where even if they get caught and go to prison or rehabilitation therapies, there is nothing that awaits them once they are out. No help, no jobs, no reintegration possibilities. They return to the only thing they know: this pool of people and drugs.”

As he talks to us, the shopkeeper keeps serving customers, exchanging a few words with almost everyone that steps into his kiosk. With some he speaks in Turkish about the increase in cigarette prices, with others about the coffee or – with a gentleman he introduces as an author – about the headline news of the day: Frank-Walter Steinmeier’s election as the new president of Germany. He nods and smiles as the author talks about why Steinmeier was a good choice, but says nothing. It’s a rule, it turns out: Seydo doesn’t like to discuss politics or religion with his customers. That would only create problems. “I have a good relationship with the people here. I like Cuban people a lot, I’ve met a few now and they are sunny and friendly people. I like the diversity of this neighbourhood,” he reflects. “I’m not getting much trouble, and I have rules, you know. If I see someone stealing from me, I ask them not to do it again. For that one time, I tell them it’s a gift but the next time they have to pay. Some come back with money and want to pay for what they’ve stolen earlier, but a gift is a gift. I never call the police in such a situation because that would just ruin my relationship with the people here. However, they don’t steal from me again but they come back, often just to talk. I also ask people to leave if they start discussing their drug business. For such things, my store is not open,” he says. However, Seydo thinks the situation at Kotti has definitely improved in the past few months. The police are a lot more present and there are fewer dealers around the train station. Of course, they don’t just disappear, he debates, they have probably found less crowded side streets, or perhaps will return once the weather is a bit warmer. 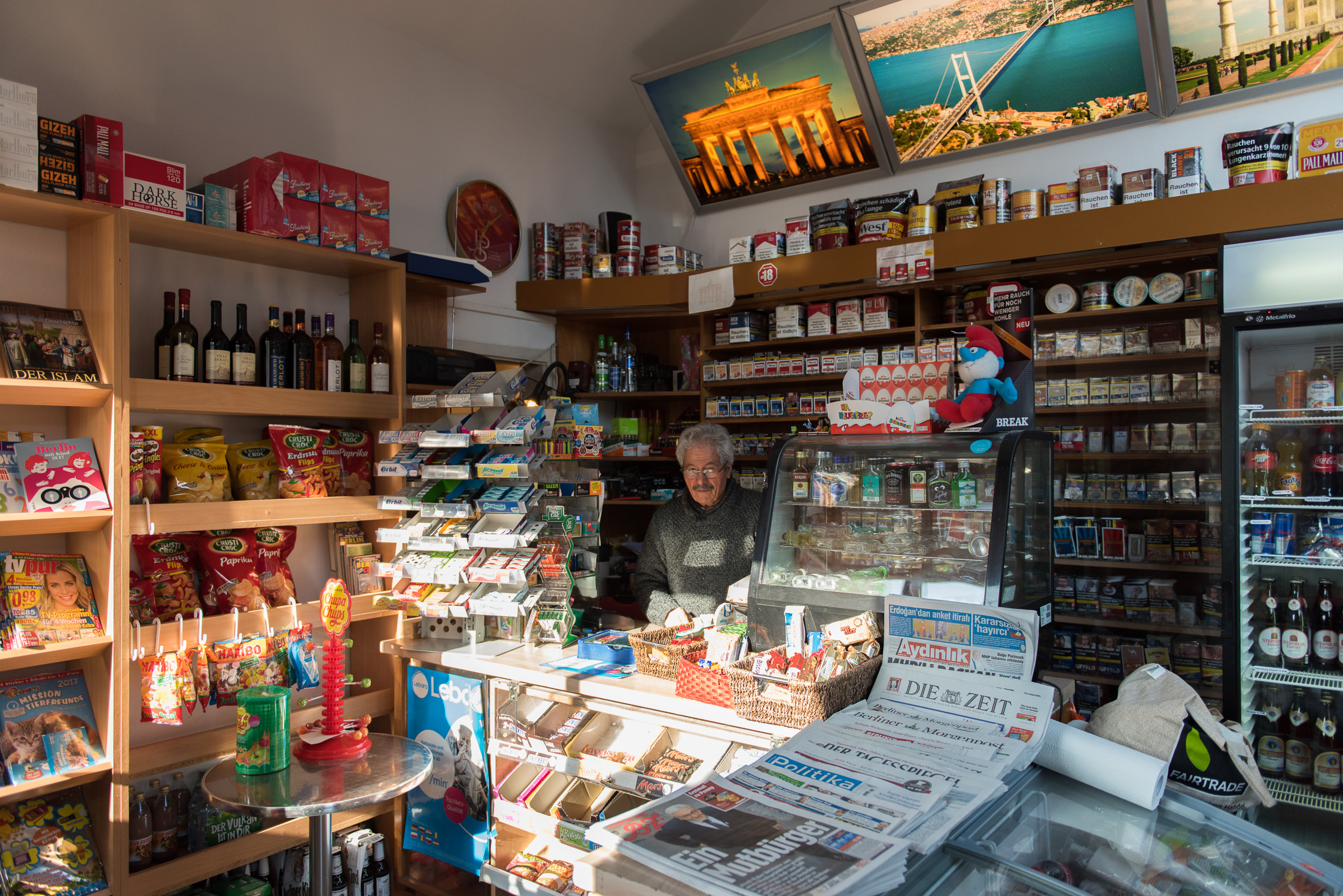 According to Seydo, the exaggerated media reports on Kotti being a “no-go zone” are not helpful at all; on the contrary, it scares people away and businesses suffer. He thinks it’s extremely important to stay positive. In Seydo’s opinion, the solution is not to criminalise addicts, but rather for the government to start programmes where businesses can receive tax allowances for employing a person fresh out of rehab: “Just like in the case of employing people with special needs, a lot of businesses do that and actually have to do that – and we need to understand that these affected people are becoming people with special needs, they need to be occupied in order to stay clean. If one goes back to the same places and same crowds, the same habits quickly sneak back too!”

And the Papa of Kotti is not just saying this because he’s being interviewed, he often tries to talk to these “affected” people about their futures. He cares especially about the young, because he wants to keep them away from trouble, and every once in a while his words turn somebody in the right direction: “It was a few years ago, I saw a group of young guys standing around next to the shop, blocking the way of the alley and behaving very shadily. I sent them away. One of them came back. He turned out to be an Indian boy, an orphan who was brought to Germany and was adopted. He had a normal upbringing – he was schooled, he played soccer – but he was lonely, misunderstood and an outsider in his own life. This led to addiction. He got into the wrong group, but you could see he wasn’t happy, he wanted out. So we talked a few times. Then one day he disappeared for a while and only months later he came again, he said that he had managed to turn his life around, went to rehab. He goes to college now and he is clean. I told him to never come back again, don’t ever start hanging around here again! Only if he wants to say hello to me!” He smiles. Above his head hang three pictures: one of the Brandenburger Tor, one of the Taj Mahal in Agra, India, and in the middle, one of the Bosphorus Bridge in Istanbul, Turkey, the bridge between east and west. 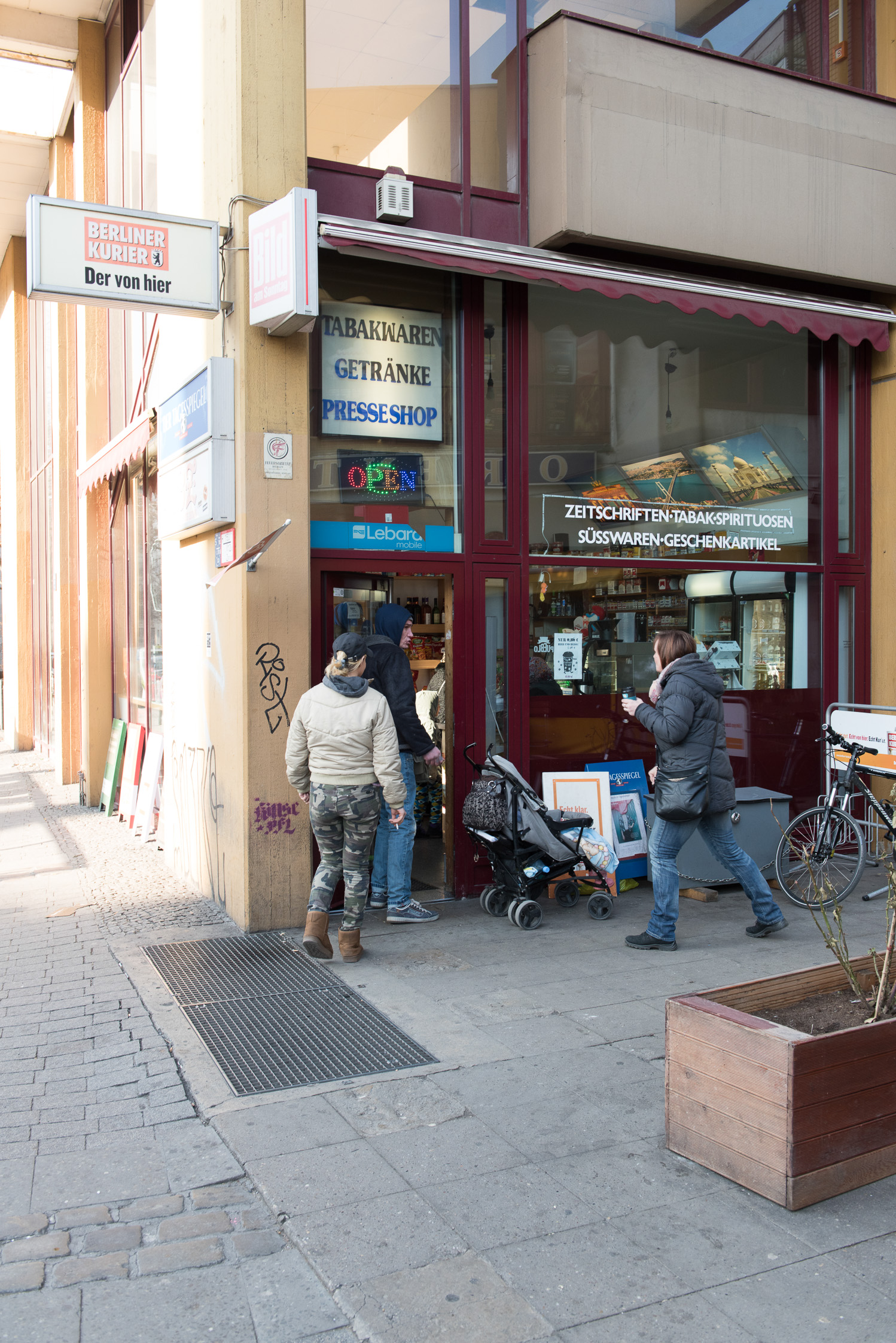 Seydo Uzun talks about his family with a great deal of joy; his wife, who has knee problems and cannot leave their apartment, his daughter and three grandchildren, his hope for the eldest to take over the business in a couple of years so he can finally rest, and his two granddaughters aged 11 and 12, who are doing great in school. But there is also a great deal of sorrow in Seydo’s life because no matter how many troubled people he managed to help, he couldn’t save his own son, successful actor Eralp Uzun. Known for his appearances in TV shows such as Cobra 11 and Alle Lieben Jimmy, Eralp also fought drug problems and eventually took his own life in 2013. Seydo’s eyes fill with tears, he pulls out a picture of Eralp from his drawer. “I tried so many things but it didn’t work. He was talented and successful. But the drugs…” he trails off, his voice going quiet. It becomes painfully clear that Seydo’s mission to help and motivate the people struggling with addiction in his neighbourhood is deeply personal. Every day in the Späti offers a new opportunity to make someone smile, help someone out, or maybe even change someone’s life. As we’re talking, a customer steps into the shop, and Seydo brightens again, looks up, eyes sparkling once more: “Bitteschön?”

Special thanks to Seydo Uzun for sharing his story with us and for being a source of good in the community. 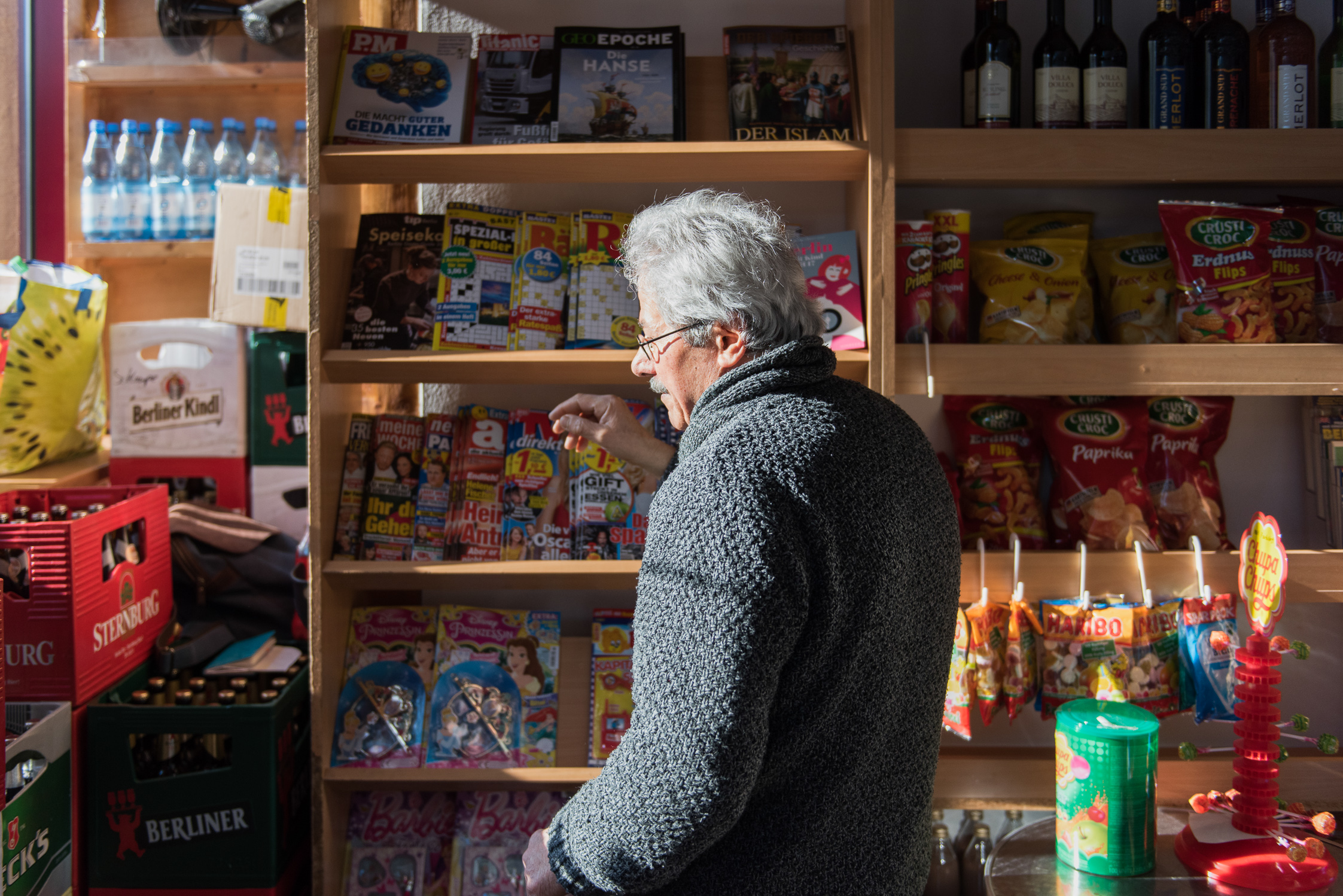