Hungry for Words: the Story for Food Project 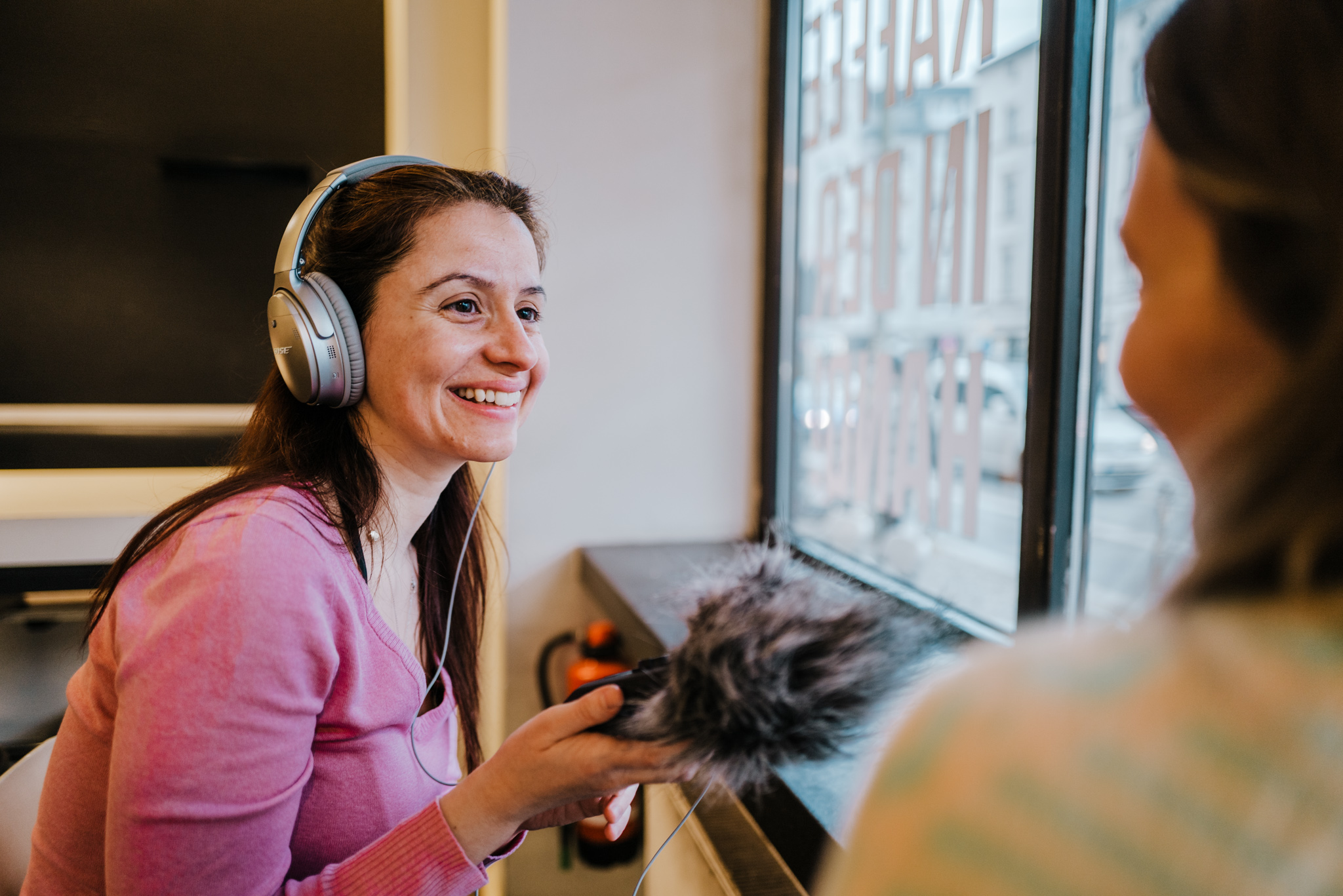 Stories are the glue that bind society. They are what we share over a radler in the park or with our family on a seemingly insignificant afternoon. Founder of Story for Food, Christina Kyriazidi, saw how important stories are, so she created a platform where brains meet bellies and stories are exchanged for food.

The belief that stories are integral to human nature drives Christina Kyriazidi, founder of Story for Food. The project she launched documents stories from regular people, while aiming to create an alternative economy using stories as capital. Christina has been involved in the arts for years. She is an accordionist, composer, actress and songwriter who lived, worked, and created on multiple continents before settling down in Berlin. Her idea for Story for Food came about in 2016 while she was working at an art residency in Vienna; an ideal place for great ideas to be born. Her experience in the residency inspired the Story for Food project as we know it today.

The project rests on two main principles. First is the importance of stories themselves. Once Christina realised the value of stories from ordinary people and their everyday lives, her interest grew into a desire to document stories that would otherwise get lost. From there, Christina decided to create an alternative economy where stories are exchanged in an alternative way – for food.

In 2017 the first events began in Berlin. They included workshops, live radio shows, and lots of story collecting and telling. Story for Food has since given birth to a series of additional events – Foodback, Sweetback, Artback, Musicback, and Songback – where chefs, musicians, and artists translate selected stories into food, art, music, and songs. 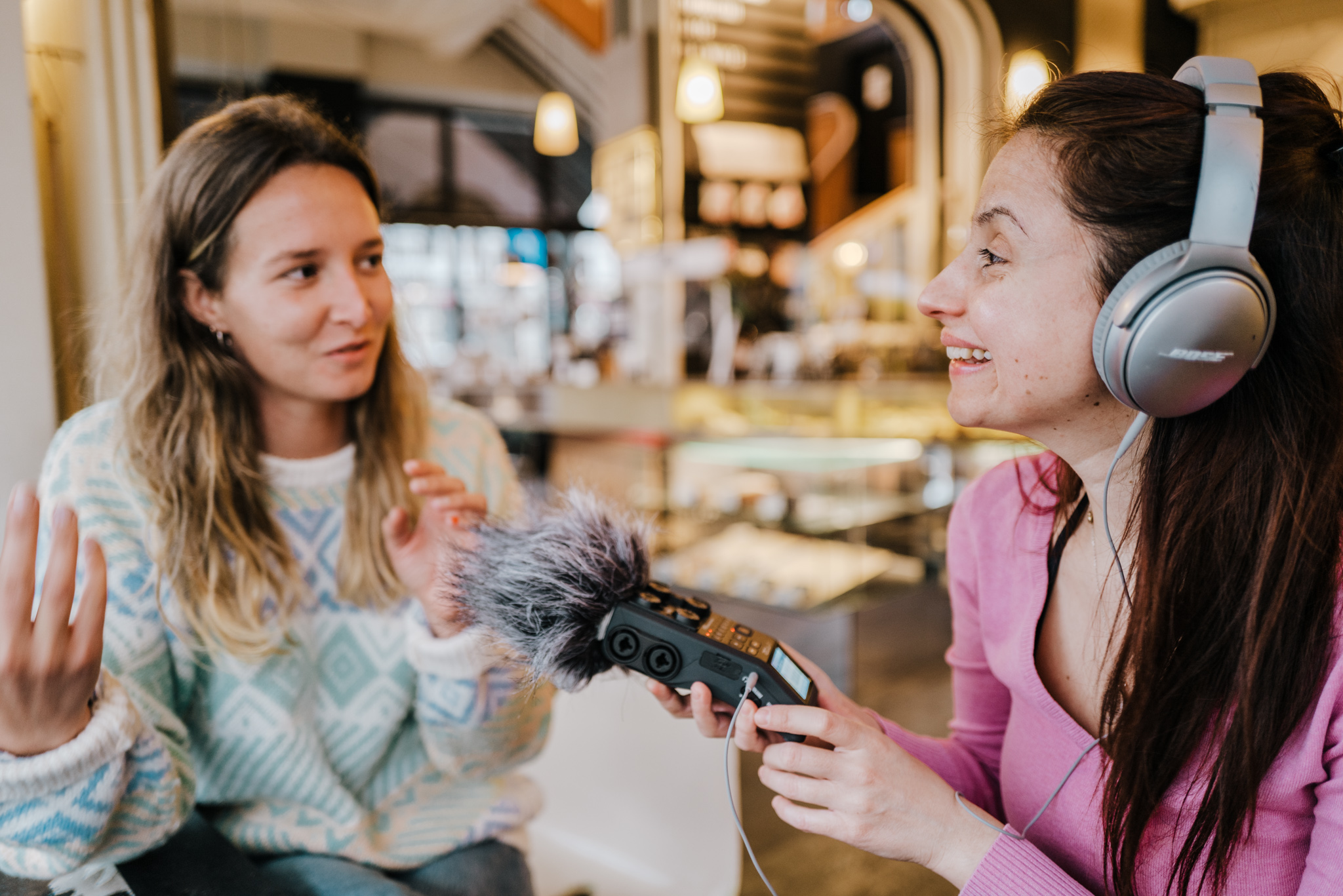 The idea behind Story for Food is to create a physical space where you can trade your story for food and drinks.

In your eyes, what exactly is a story and what does it do?
A story is an entity that carries meaning, emotion, and purpose. It has the power to transport you, to affect you, to transform you – even if not all stories do so to the same degree. I love how the writer Terry Tempest William defines a story. “Story is the umbilical cord that connects us to the past, present, and future…Story is a relationship between the teller and the listener, a responsibility…Story is an affirmation of our ties to one another.”

What inspired you to start Story for Food? Was there a specific story that inspired the founding of the project?
I conceived the Story for Food project in September 2016 during the Citizen Artist Incubator art residency in Vienna. Being an actress and writer, I’ve always been passionate about stories and I knew that I wanted to create a social art project related to storytelling.

The idea behind Story for Food is to create a physical space where you can trade your story for food and drinks. At the same time, as its name implies, you’re ‘feeding’ yourself with stories. A couple of months before coming up with the idea, I heard an amazing story from a taxi driver in Berlin. He was an old man from Iran. He told me of his political imprisonment during the Iranian revolution of 1979 and of a lost love who he has been trying to trace ever since. The story was so vivid and powerful that it felt like watching a movie with my ears. It made me wonder how many inspiring stories out there are getting lost every minute because there is nobody to document them. Very few of them become films and books. What about the stories we carry, you and me; the stories we tell ourselves and those we have heard, the stories that define us or that once affected us? This is why I decided to create an archive of previously undocumented stories, stories that would otherwise get lost.

You mentioned you want to promote the practice of sharing stories and a culture of listening to them. Why are these practices so important?
We have been sharing stories since the beginning of time. In a way, we are animals who share their stories. Sharing and listening to stories is natural to us. Through storytelling, we are able to understand the world around and within us, and somehow we become the stories we carry and share. In the current world of displacement and digital disruption, we often lack grounding and belonging. We need stories to lead us through, to empower us, and often to humanize us. Stories are our intangible wealth. They carry a transformative and potentially healing power. Our own stories can remind us who we are, where we come from. The stories of others can inspire and guide us.

Story for Food aims to generate a database of stories based on the tradition of oral storytelling. Why is this type of storytelling so important?
People often confuse Story for Food with an open mic platform. We are not an open mic. Not only because all story recordings take place anonymously in private or in small groups, but also because we look for stories from people who are not performers. We are interested in the stories that people like you and I carry. Stories that are shared orally and that would otherwise be lost because they are not performed or written anywhere.

Our story archive is an audio archive. Every recorded story also carries the moment when it was shared within it; the emotion in the voice of the teller, their interaction with the listener. In that way, every story in our archive is also a moment in time. We only accept oral stories, because we want to capture this liquidity. In the end, this ephemeral moment becomes as important as the meaning of the words. An oral story is an entity of meaning shared at a specific time. 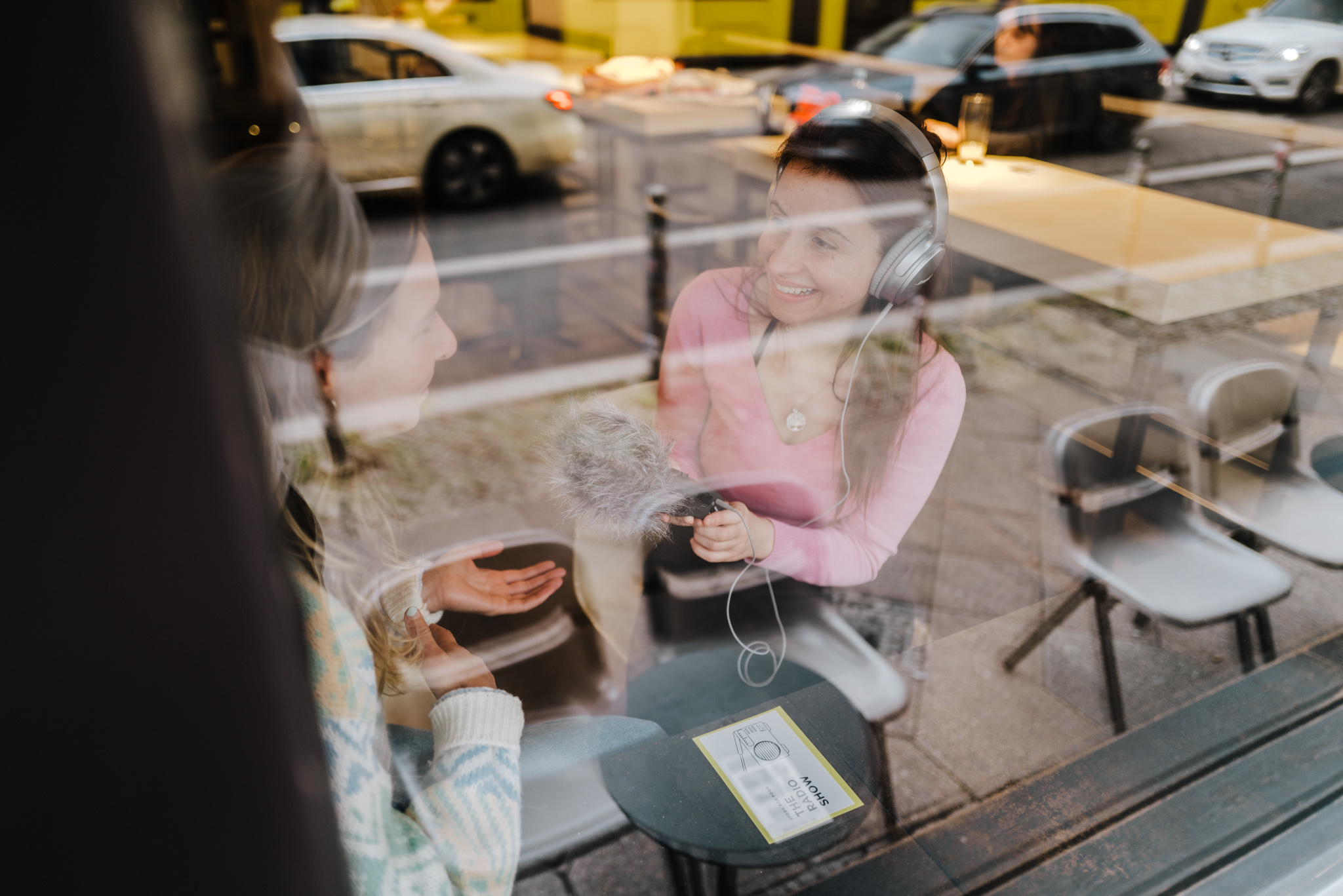 Are there recurring themes in the stories you have collected over the last four years?
Love stories seem to be the first choice for many people when it comes to sharing one story in our audio archive. For the first couple of years, we also had an impressive number of stories about grandmothers.

On your website you mention that Story for Food proposes an alternative economy based on stories. How does your project reimagine economies, and what does a positive economy look like?
Story for Food aspires to create a physical space where you can trade your story for food and drinks. For the time being, every time you record a story in our audio archive you take back a bar of chocolate or a hot drink. In 2018 during our crowdfunding campaign, we tested the Story Economy model on a very small scale and in collaboration with 11 coffee shops in Berlin who offered free coffee vouchers for every story recorded in the Story for Food audio archive. This is then an example of a positive economy; exchanging the intangible with the tangible. It’s also a way to explore the idea that our stories and experiences are our real wealth. Their value is not only personal, but also potentially social, since they have the power to affect and transform others. 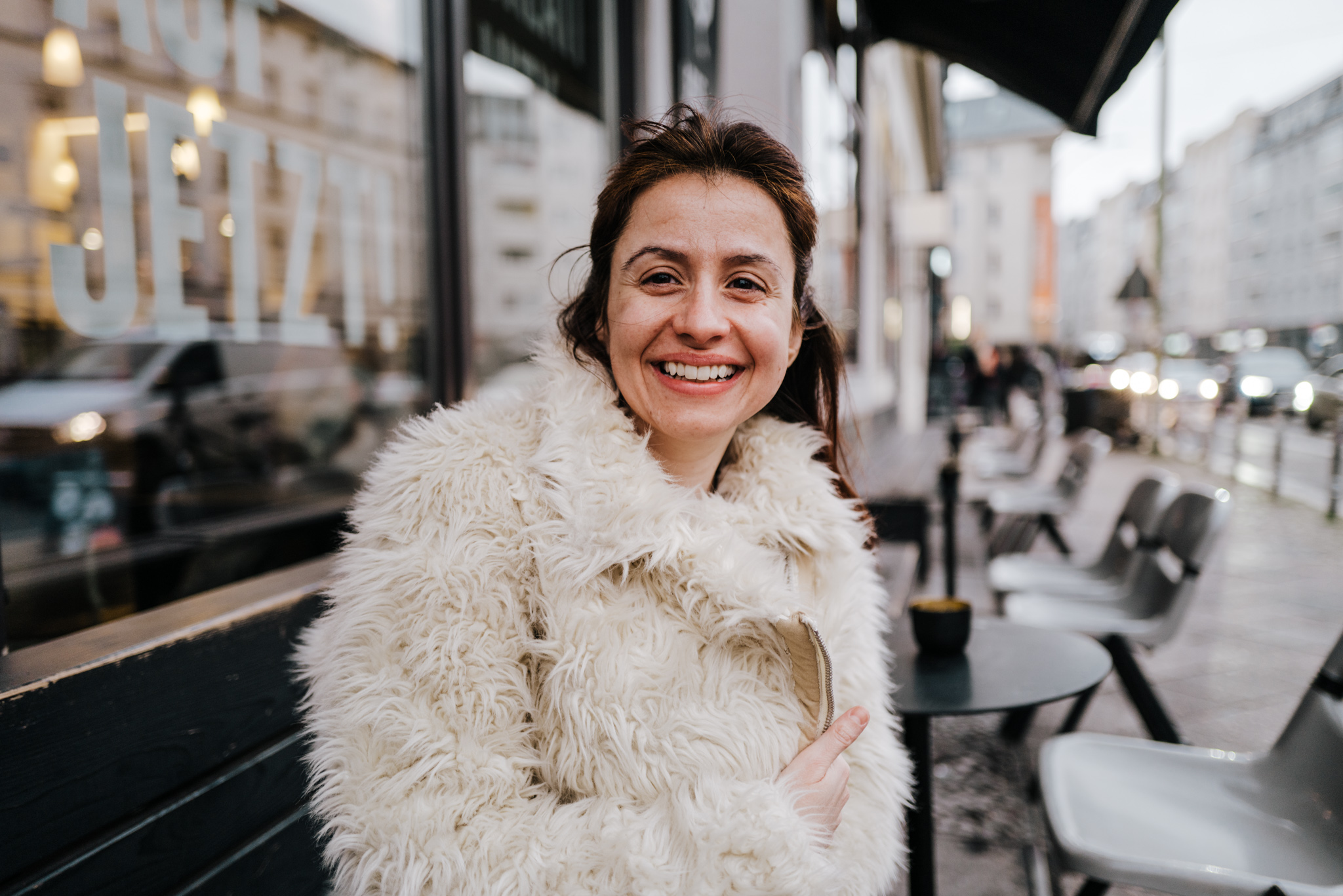 When I walk down the street, I often amuse myself thinking about how many compelling stories walk next to me every day.

In your event Foodback, you translate selected stories into a specific food. How do you match food with a story?
We did the Foodback event in collaboration with the Contemporary Food Lab. We had the pleasure of working with Jennifer Juba, who is both a chef and a visual artist. For every Foodback dinner, she listened to several stories from our audio archive and selected three, one for each course. Then she translated the feeling and images of each story into specific tastes, smells, colours. These were special dinners; we held them over candlelight and we listened to each story before ‘tasting’ it.

Can you tell me more about your podcast, Stories in Berlin? What makes Berlin such a unique setting for stories?
Stories in Berlin is a storytelling podcast that delves into the cobbled streets of Berlin and explores the city’s history through anecdotes, personal tales, and the experiences of Berliners, old and new. The first season was centered around the Berlin of today, while the second season focused on old stories that took place in the city.

Berlin has been the setting for significant stories since its foundation. Today, the city is a melting pot of different cultures and attracts all kinds of creatives. When I walk down the street, I often amuse myself thinking about how many compelling stories walk next to me every day.

Berlin is a unique place where you can find inspiring stories from around the globe. Just from recording in Berlin our audio archive has stories in 14 languages. On top of that, the city invites you to create your own engaging stories, which makes it a place that vibrates with outstanding stories, old and new. 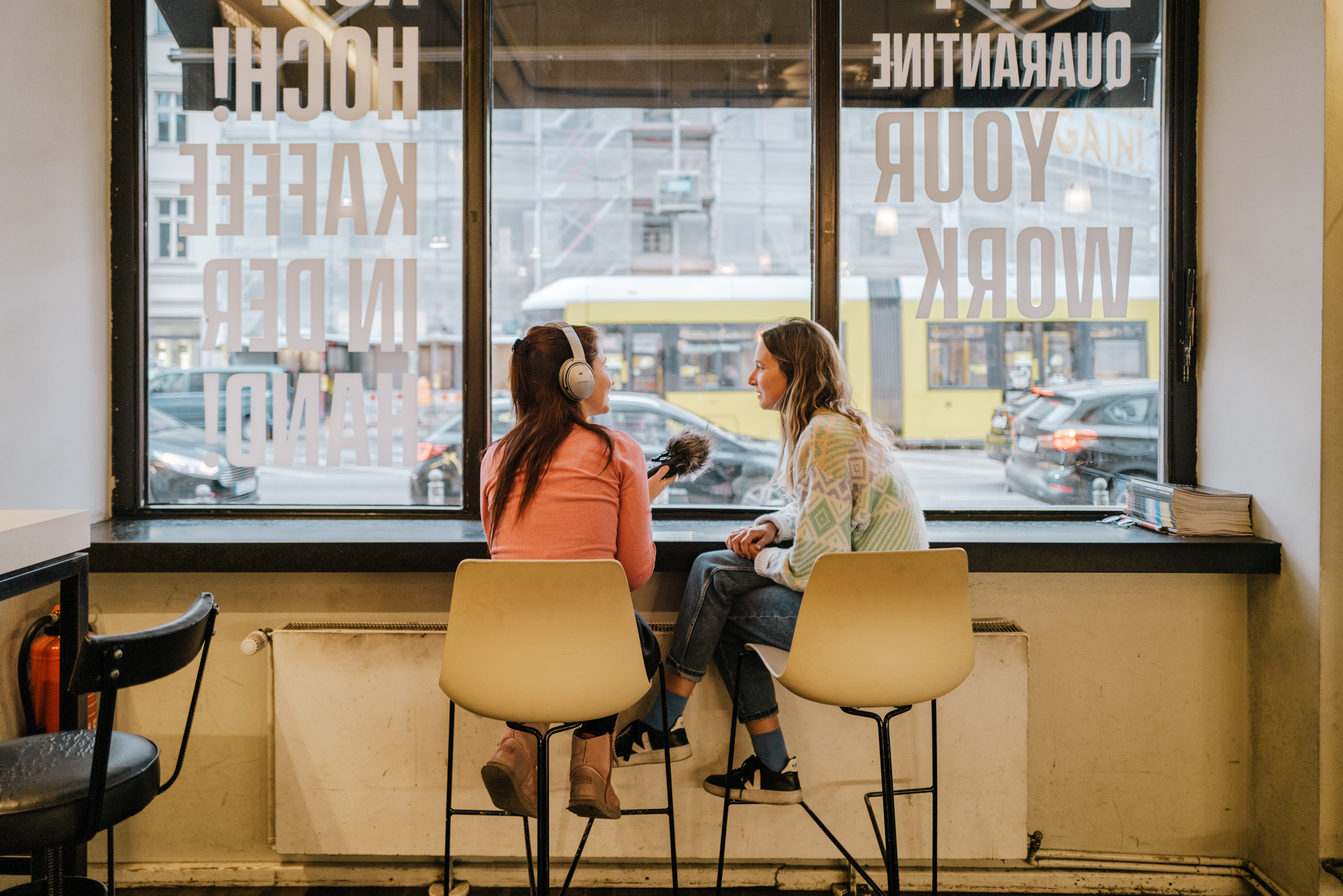 Congratulations on the 4th birthday of Story for Food. What did it take to get here and what are your future plans?
Four years passed very quickly. They have been so colourful, so full of stories and inspiring meetings. During some of the early years we had the chance to test some ideas; to see what works and what doesn’t. At the moment, we plan to create a Story for Food app that will allow us to gather stories from around the world. Our intention remains to implement the Story Economy model in Berlin and abroad someday soon.

Can you tell me a bit more about your projects, for example, Story House?
We wish to create a Story House one day. It will be the home of our audio archive where people can come and search for the stories of strangers. At the same time, it will be a physical space where stories are treated as a new kind of currency; the first example of how an alternative economy based on stories works and how it could expand into similar initiatives, like Story for Taxi, Story for Ticket, etc.

Story for Food hosts regular events where attendees are invited to hear stories from others and step into the circle to share their own experiences. Upcoming events can be found on their website. 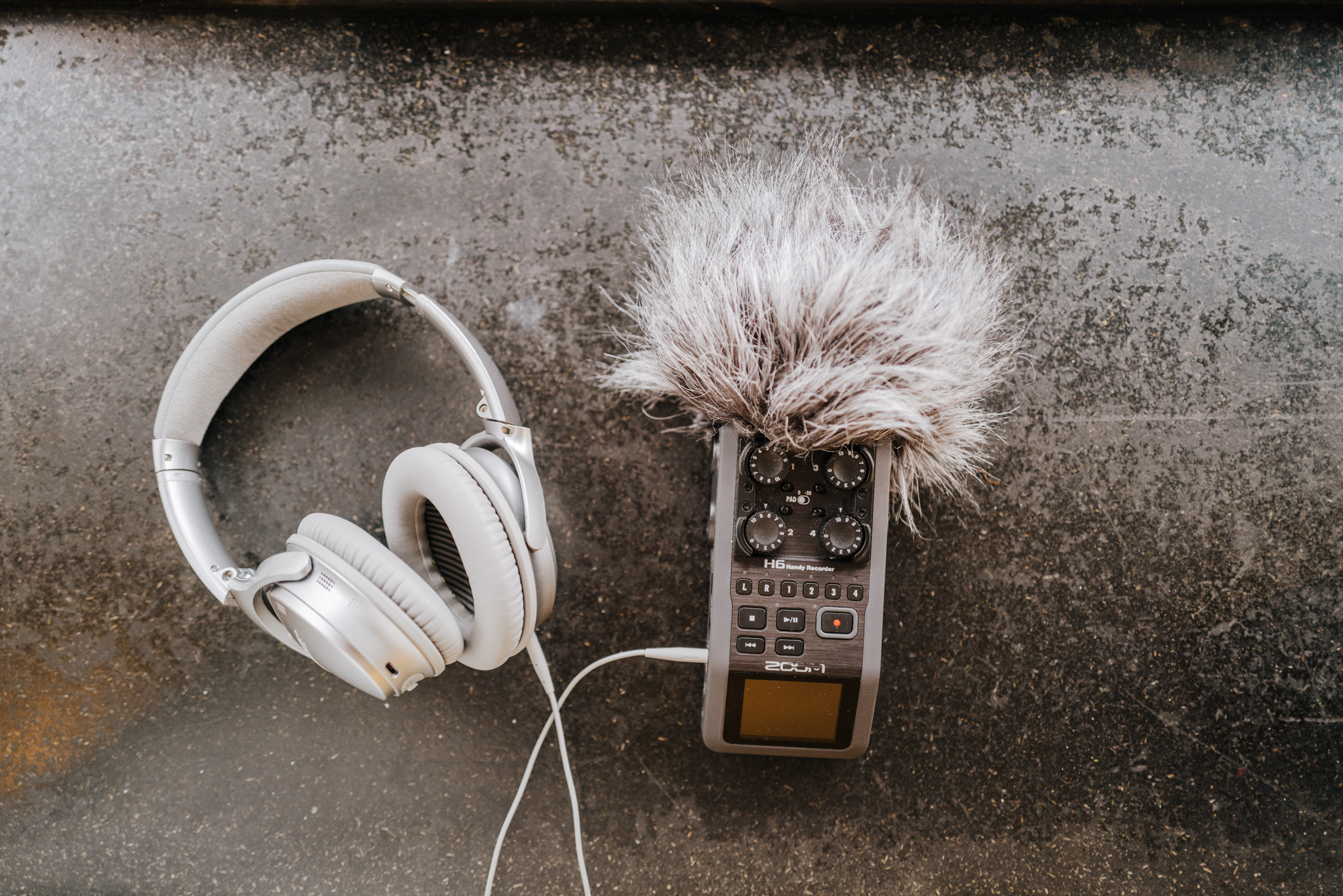