Ideas for the future from the Berlin Women's March 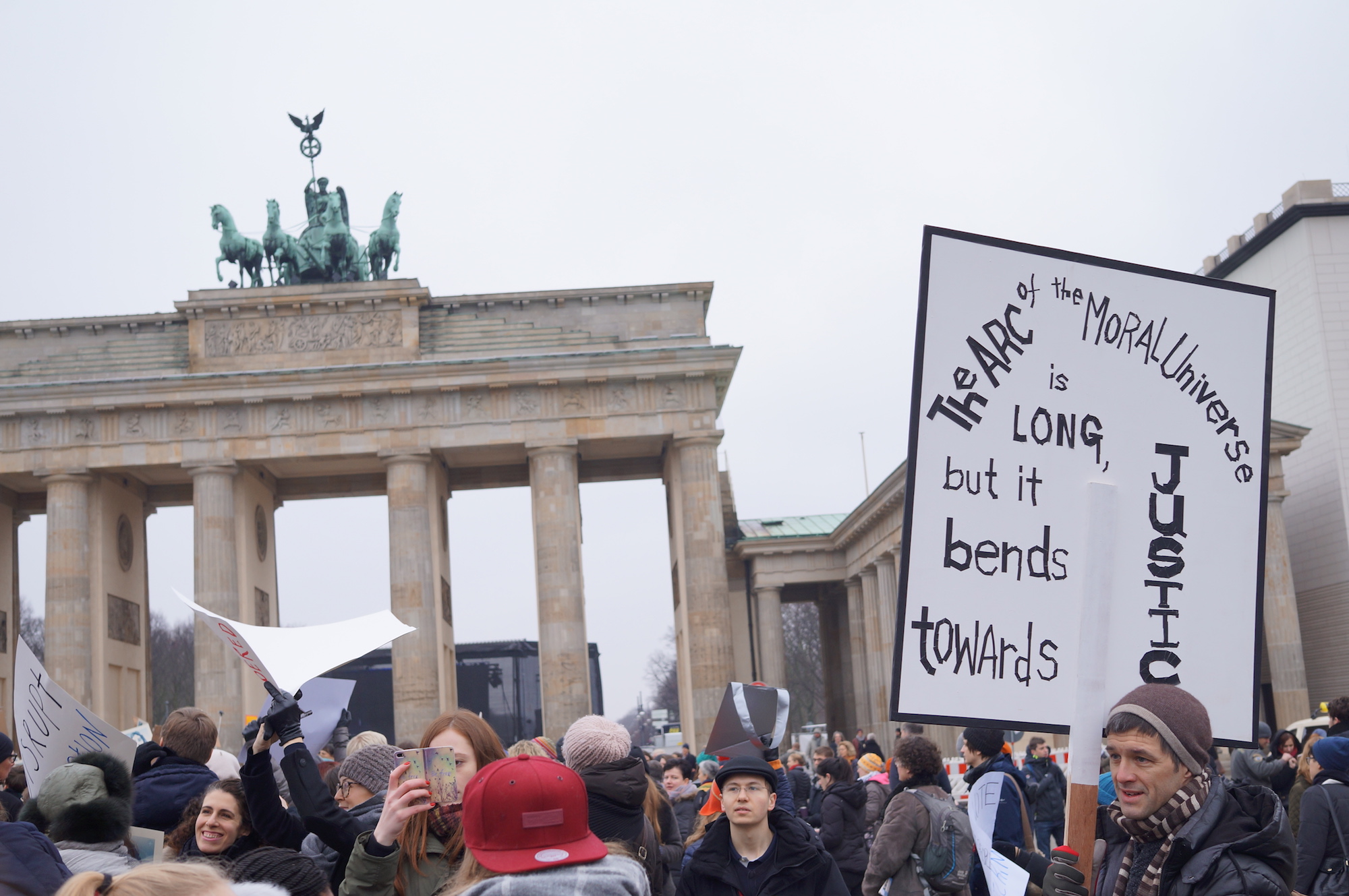 One out of every 100 Americans took to the streets to stand up for women’s rights at feminist rallies across the US on January 21st, making the Women’s March the largest one-day protest in the country’s history. Every continent around the globe – even Antarctica – held sister demonstrations in solidarity. At Berlin’s Women’s March, we took some time to hear the concerns, ideas, and comments from a number of the demonstrators. 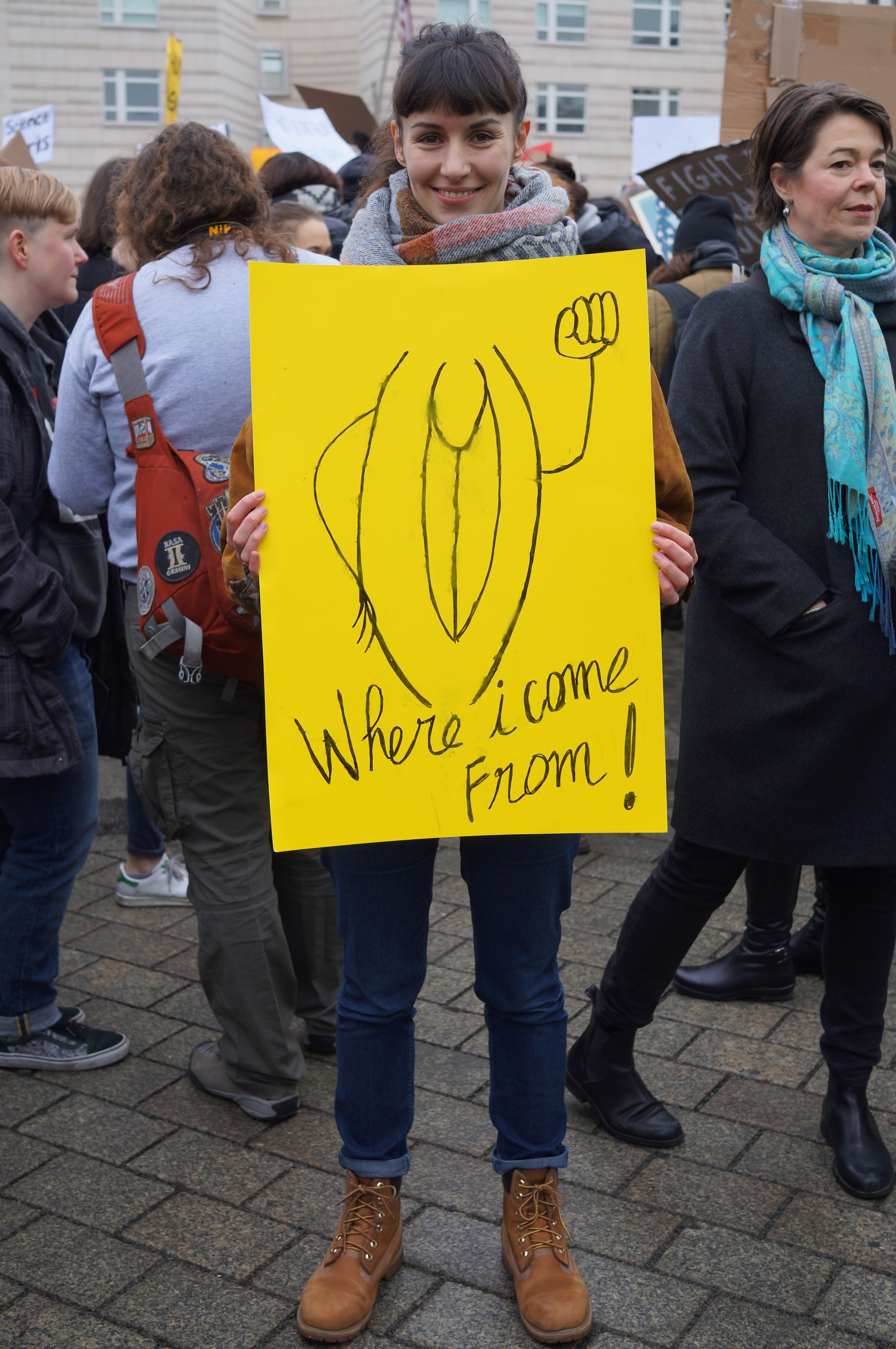 “Now that Trump has been elected one of the main rights of women that’s in jeopardy is abortion, and I can’t even believe we’re still talking about it today. It’s crazy. We’re going backwards. We need to talk with men. I talk with my brother, with my dad – I’m really lucky because my dad is a big feminist. We can’t be silent. We need to make our voices stronger, on social media and in the street. We have to fight.” 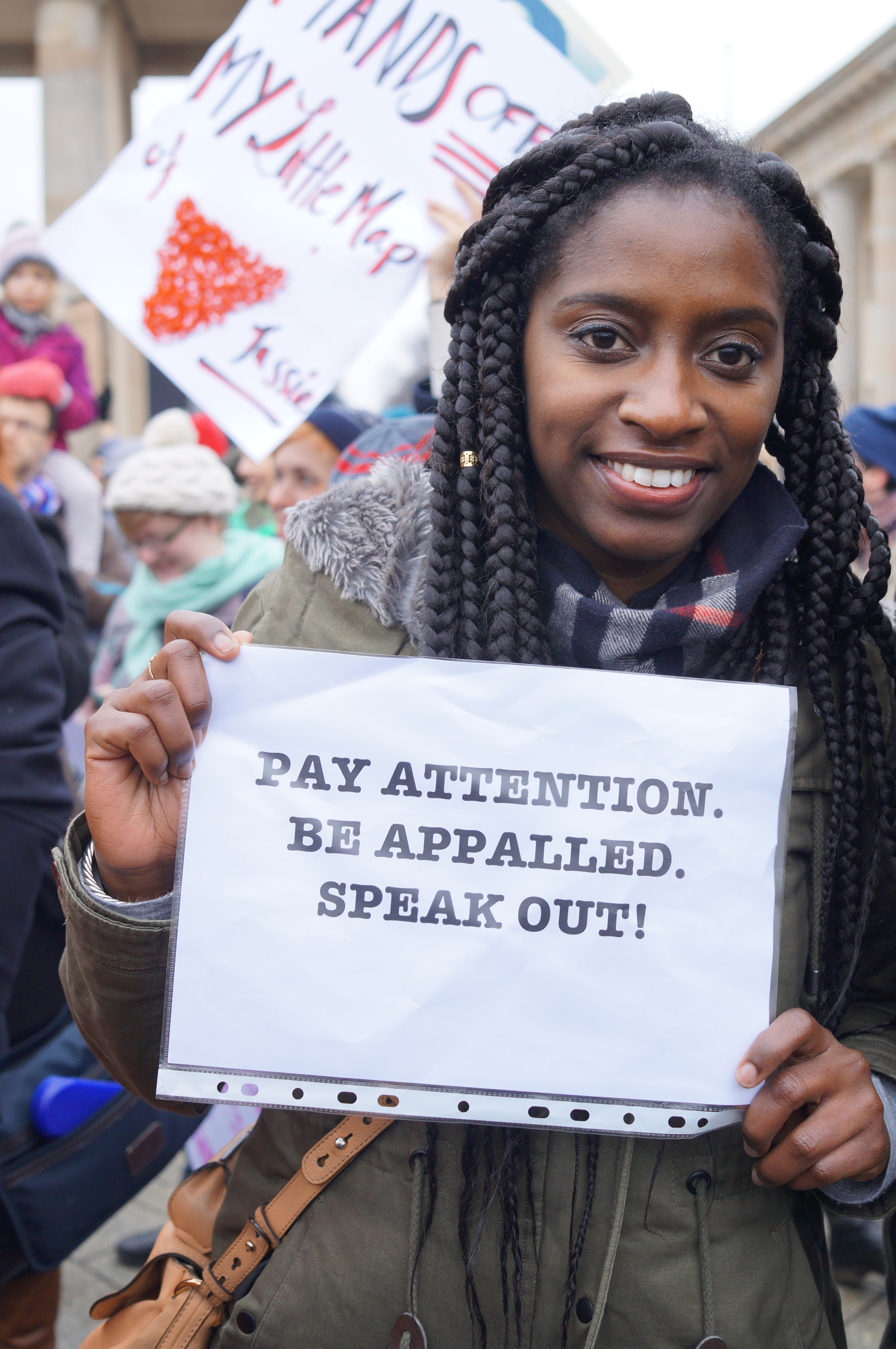 “I’m worried about complacency and normalising. I don’t like the idea that we should make America a corporation and give up on America as a country. Even when we don’t agree with what’s happening in the White House, we should be able to help other people in our own little worlds.

As a scientist you always have to be verified in your truth. We should hold the people we vote for accountable by calling in – you can use Skype, it’s not that expensive when you’re outside the US – and by voting every time there are new elections in your city or state. There’s no more sitting back and saying, “Obama’s going to fix it,” because he’s not there anymore. It’s time for us to fix it.” 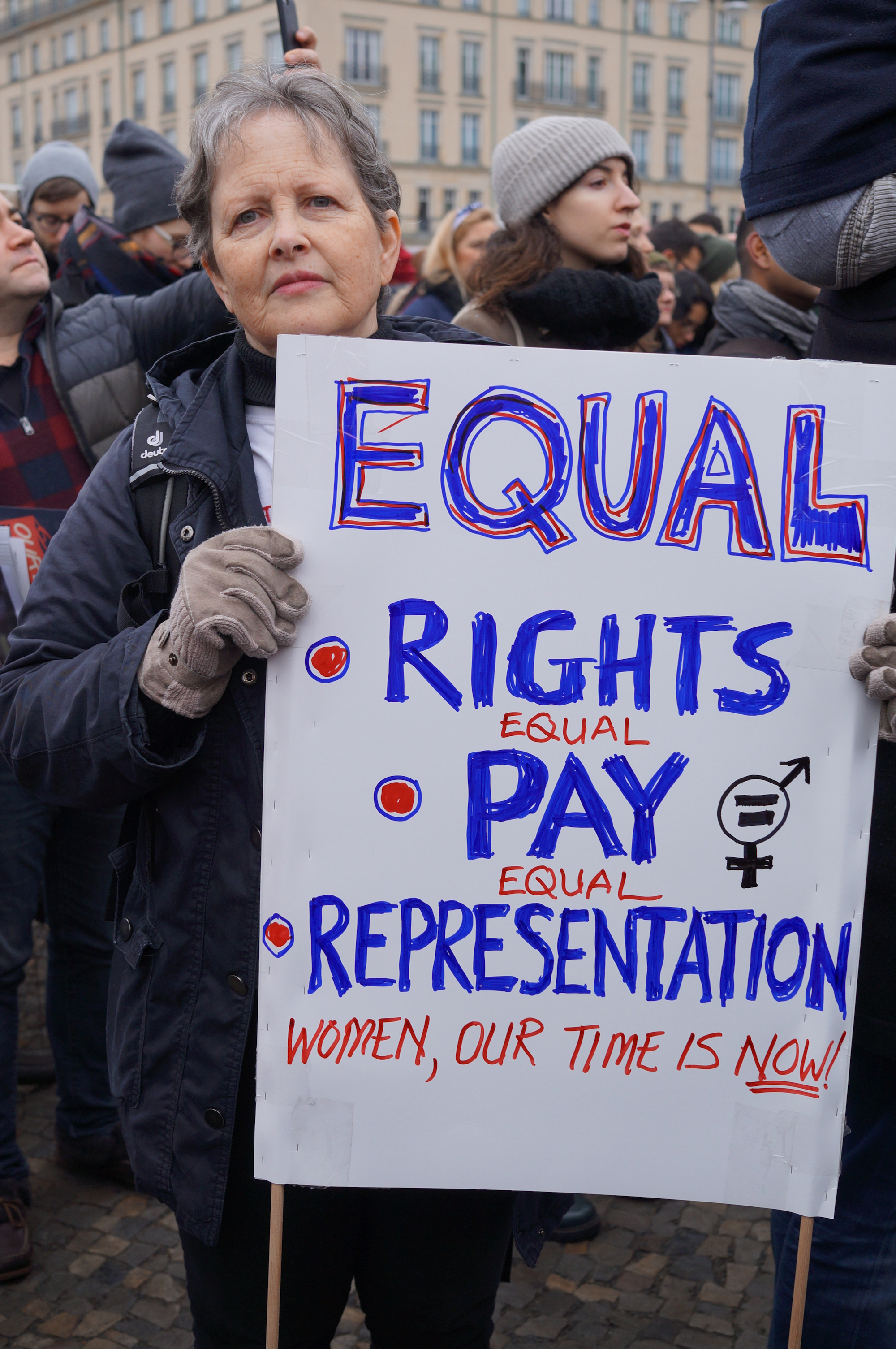 “People will immigrate, because they have no choice. Whether it’s because of water or famine or warfare, historically, people have always been on the move. Whether or not we’re mature enough as a species to accommodate that reality without more bloodshed clearly remains to be seen and I’m not terribly optimistic. Although I appreciate what Angela Merkel has done here. Many people in Germany have opened their homes to refugees and there are programmes in place to help people integrate. It’s a model that the whole world could benefit from.

How do you make people care about the truth when Donald Trump is calling a major news network “fake news” but uses Breitbart? Especially when there are so many distractions, and in the US many families are already stretched to the breaking point and don’t have the time or energy to vet sources. I think the best thing to do is to make things personal, make things local. People have to be willing to stick their necks out a bit. Instead of saying, “Okay, this person believes this bullshit, I’m just going to slough it off,” take the initiative. I’m not an impolite person, but I do believe in arguing with people.” 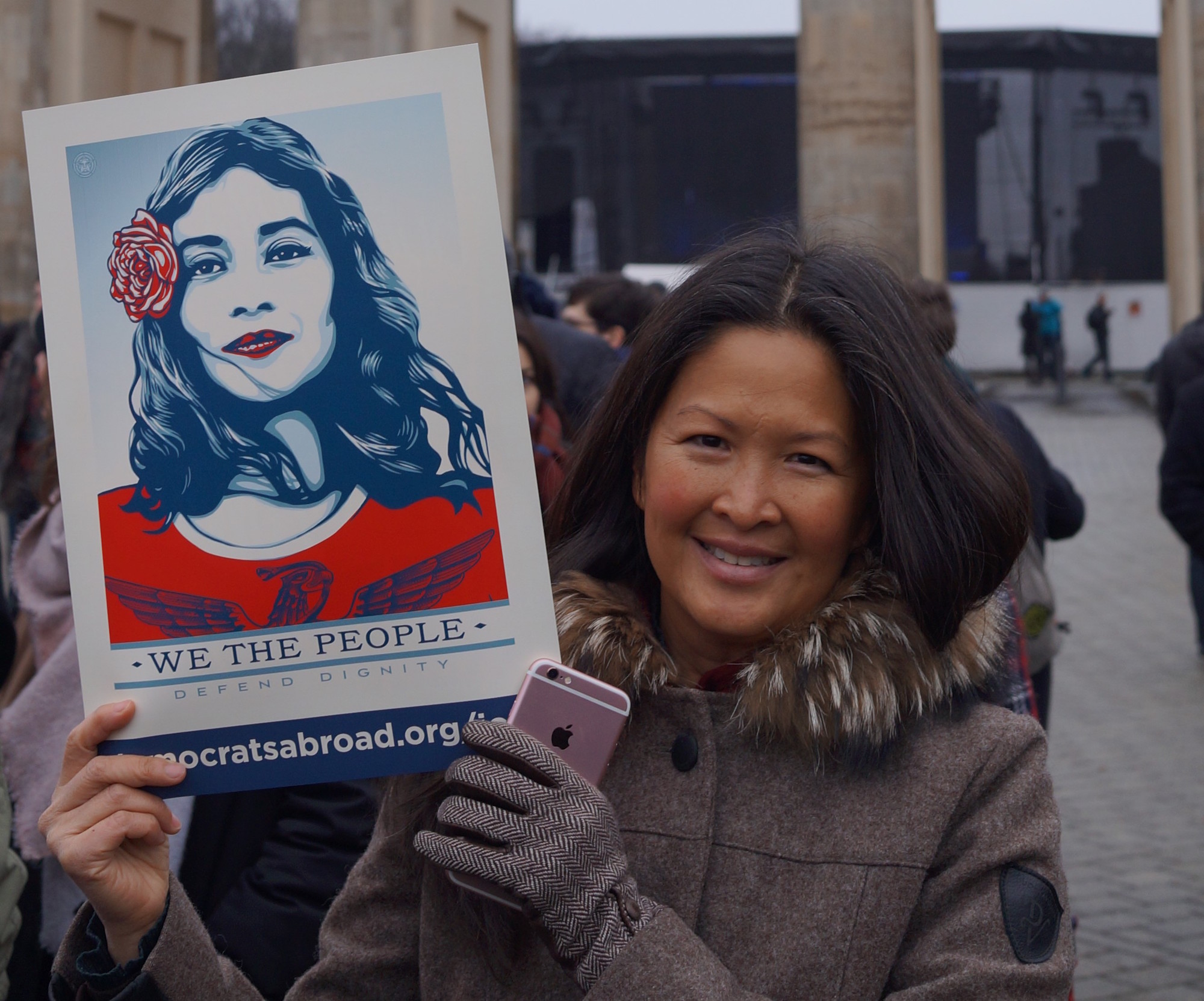 “I’m in Berlin for a year to write my memoir about my experience as a Vietnamese refugee. I’m one of five daughters who come from a culture where women are not revered at all. I advocate against human trafficking and for all girls’ rights. This rally is about creating awareness that women’s rights are human rights.” 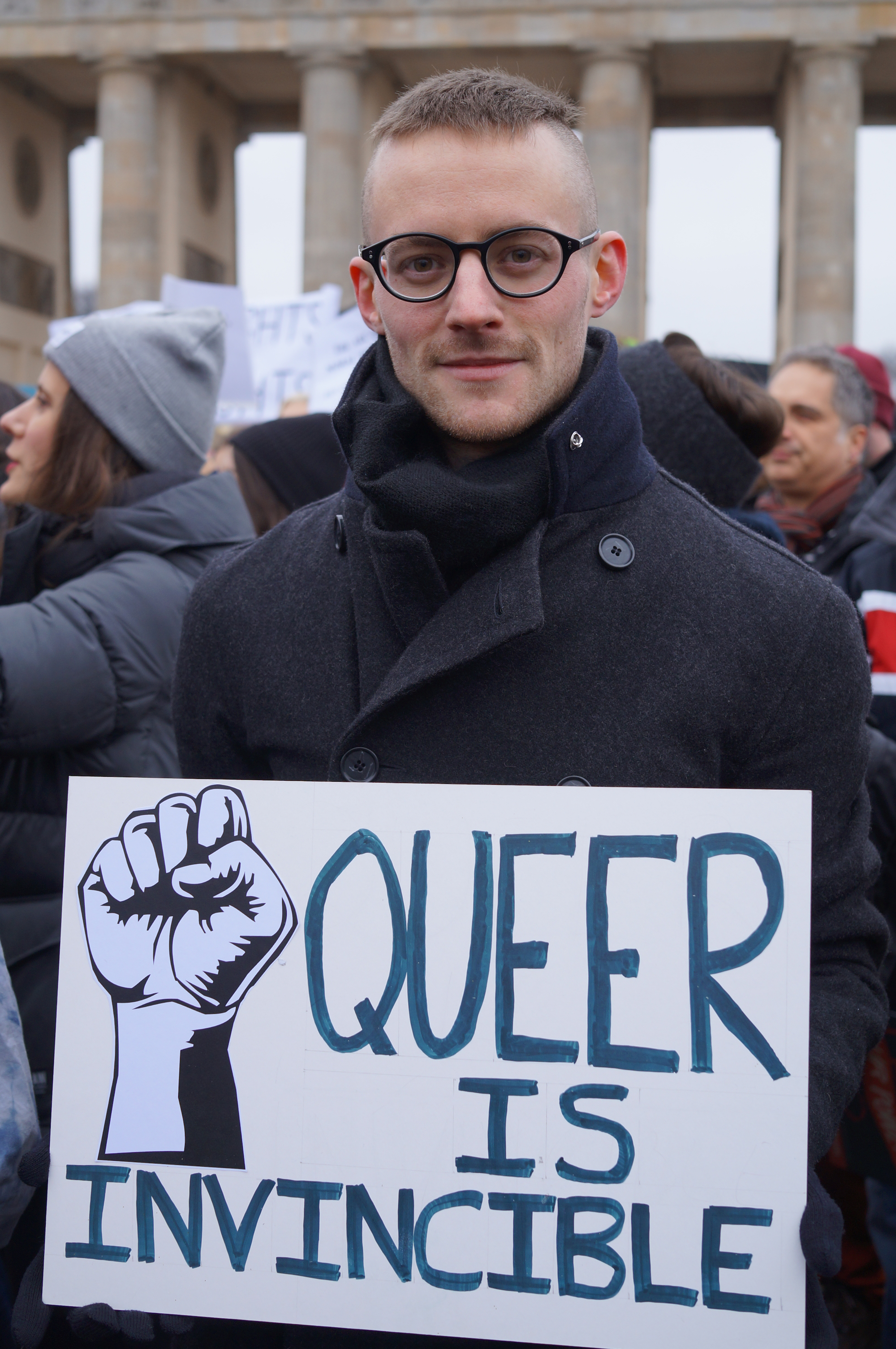 Marc Yates, 28, magazine editor from the countryside near Bristol, UK

We have to be aware of liberal echo chambers. Reach out across the aisle and have as many engaging political discussions with people as you possibly can and don’t be afraid to argue in a respectful, progressive way. Don’t be afraid to challenge people and find out more about their views so you can be more secure in your own position.” 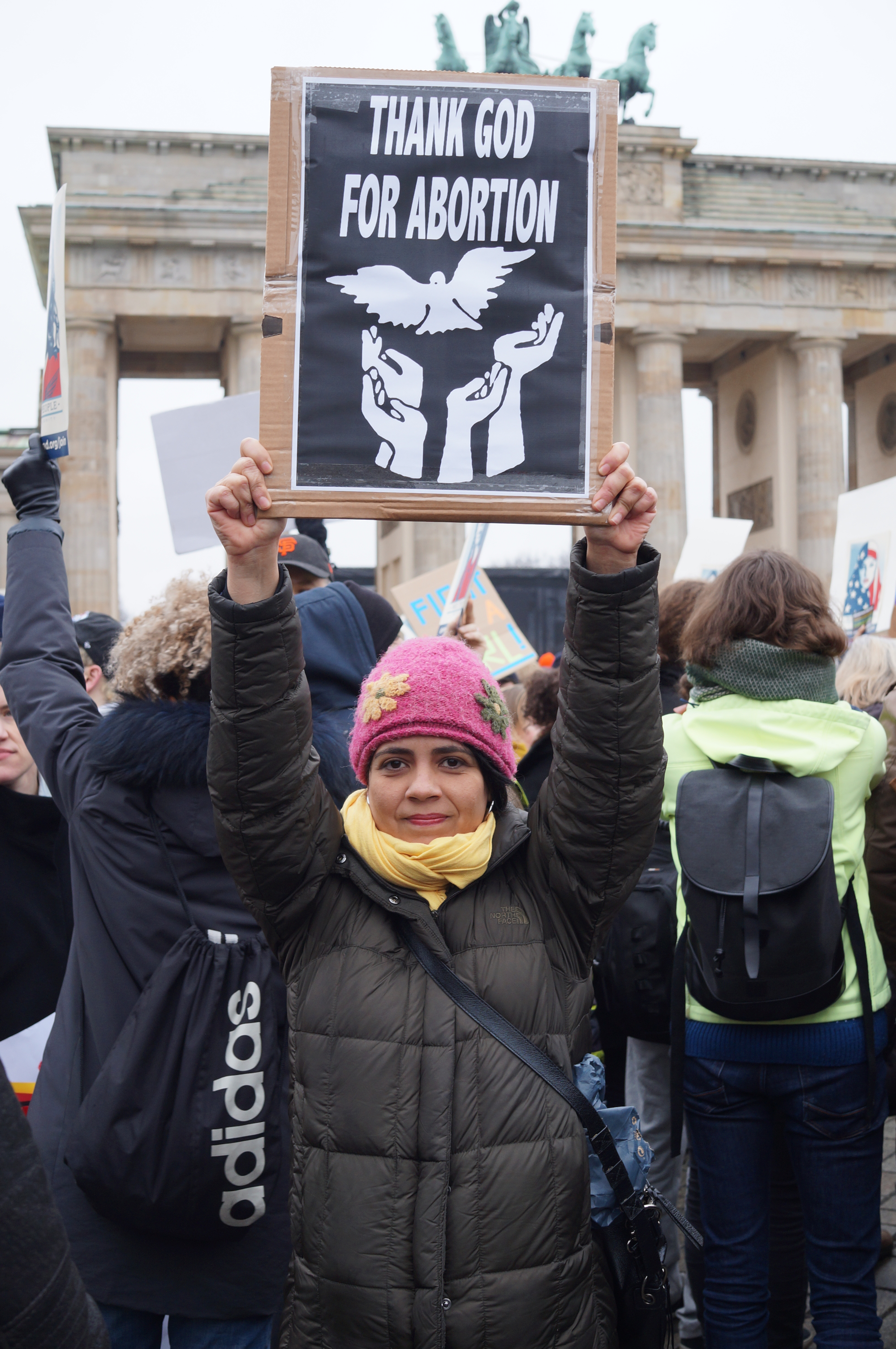 “Everything is at stake during this presidency – healthcare, public funding for education, welfare, the environment. Women will keep earning lower wages. The LGBT page from the White House website is already gone. I’m extremely angry and I’m here to protect my reproductive rights. I’m tired of old white conservative rich men telling me what to do with my ovaries and my vulva. They’re mine. They don’t belong to them. I feel sorry for Melania – blink twice if you need help. Women, we need to stand up for our rights. We’re not second or third class citizens. We need education. We can’t sit idle. We have to mobilise and we have to keep on pushing.” 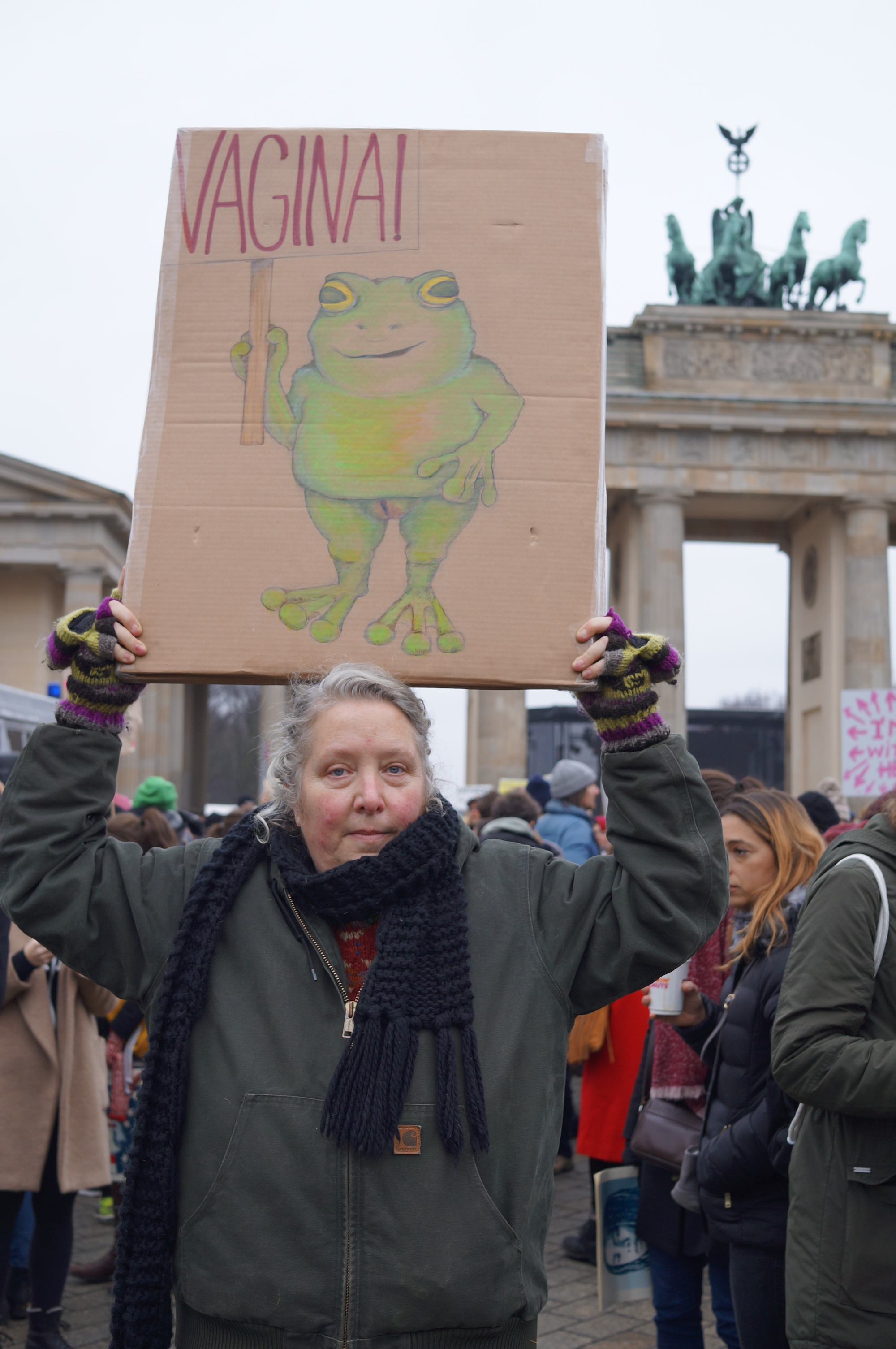 “It’s shocking how most kids in the US don’t know what a clitoris is until they’re an adult. I’m here to celebrate the vagina and get it out in the public sphere, because people are still uptight about just saying the word.

It’s telling how much normalising is already happening. The media are running stories like What’s Ivanka Wearing? No! That’s like, What’s Eva Braun’s Fashion Sense? or How’s Goebbels’ Home Life with His Pets? How much longer before we’re saying, ‘Oh look another internment camp popped up’? Look at the court case in Texas. On the first day they tried to shut down the civil rights court case for voting rights. People need to be aware of what’s going on and agitate and organise. If I have to be the crazy American lady [in Berlin] every day, then fine. Because this is not normal or acceptable. This is not okay.”

After a weekend of feminist camaraderie, Donald Trump signed executive orders that rolled back years of progress with dire consequences, including cutting aid toward health services for millions of women in developing countries around the world, by reinstating and dramatically expanding the global gag rule.

This is just one excruciating reason why people across the globe came together in these women’s marches, and a painful reminder for many of the long road of work and resistance ahead. As lies become “alternative facts”; as public access to scientific information is shut down; as the freedom of the press is weakened; and as military parades, the wall, and a call for American citizens to inform on their immigrant neighbours approach reality, there are those who will still be sitting back and hoping for the best. Perhaps instead we should consider the advice of Russian–American journalist and dissident Masha Gessen: “The thing to do… is to continue panicking. To continue being the hysteric in the room. And to keep saying, “This is not normal.””

Read more by Mary Katharine Tramontana on her website and @BangingBerlin.