Tackling food waste one trolley at a time 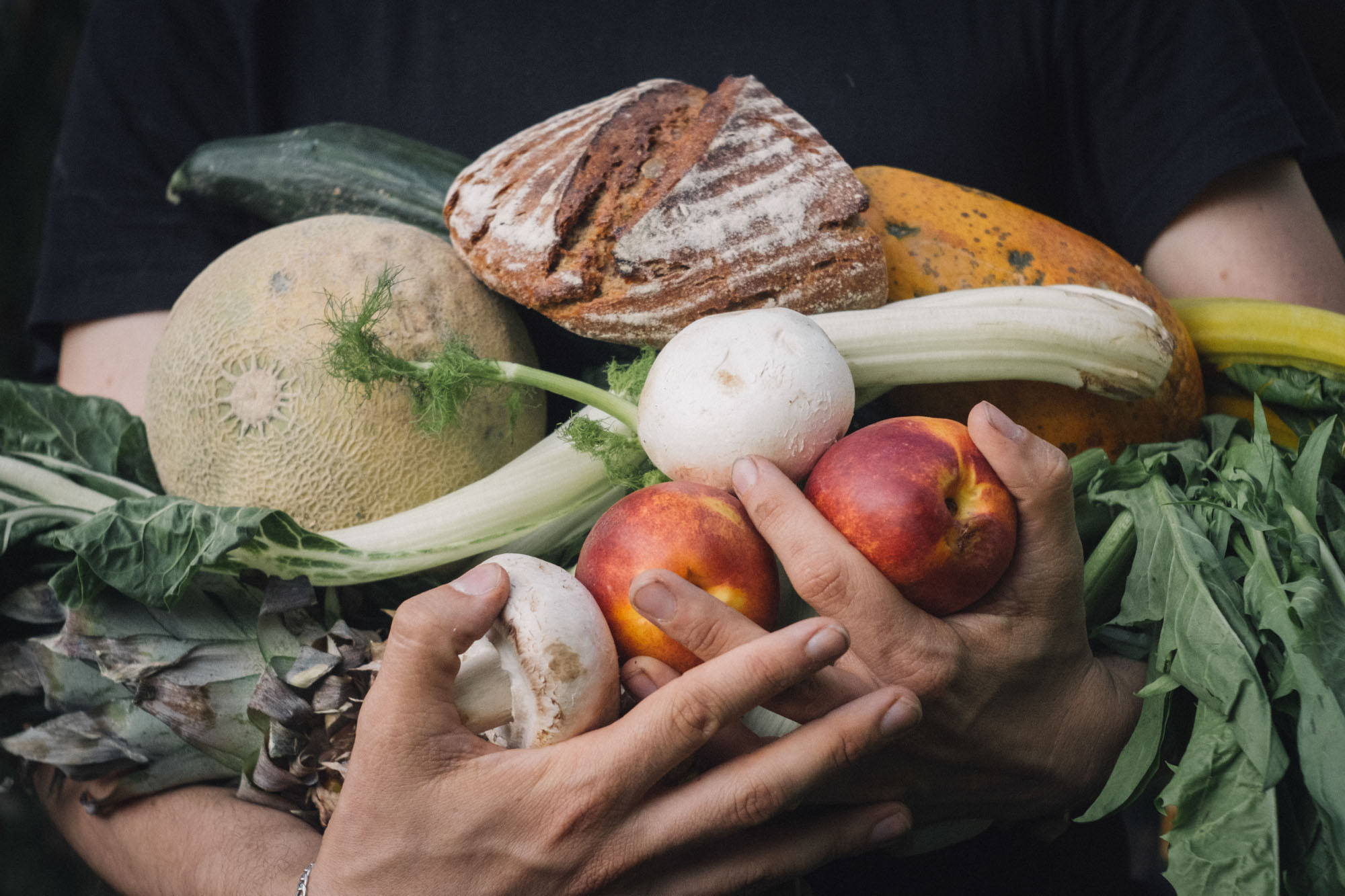 In a world where an empty shelf means a wasted sales opportunity, one wonders how it is physically possible for us to deal with the sheer amount of food that is so quickly restocked and replenished in our supermarkets. So when the lights go out and the last cashier has neatly pressed all notes into the cash register, what happens to all of the food edging past its sell-by date? Tobias Goecke knows and is trying to change it, one trolley at a time.

When you first meet Tobias you might imagine that he’s achieved almost everything he set out to achieve with The Real Junk Food Project Berlin. His calm persona and gentle demeanour give the impression of an individual totally at ease in their affairs and business. However, there is a rag-tag charm about the project that Tobias began back in June 2015. Talking with him, it becomes apparent that the Berlin branch get their hands dirty, work exceedingly hard and passionately pursue their goal of bringing about a radical change in the way we deal with food waste. 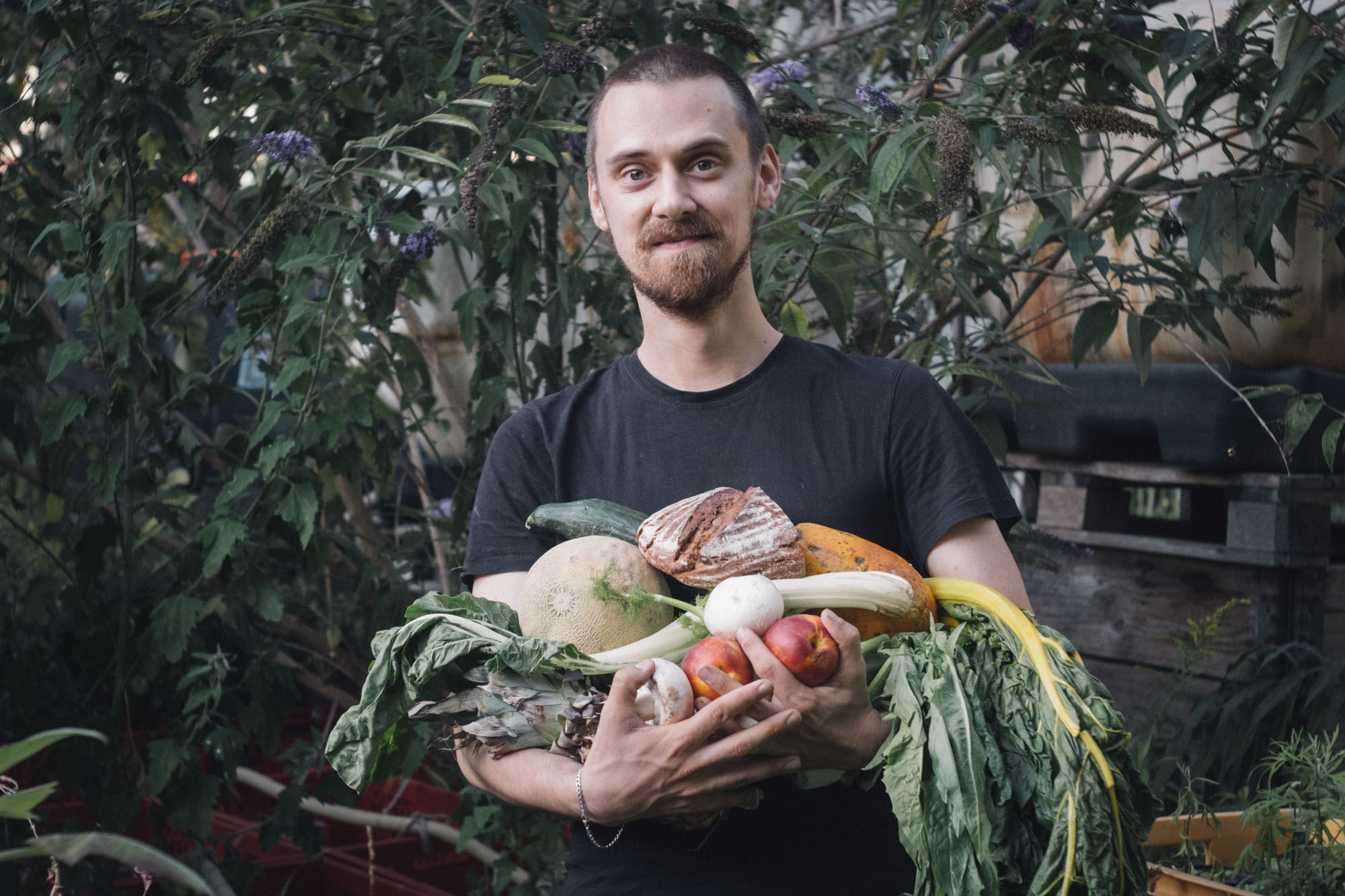 Fact: globally, somewhere near 1.3 billion tonnes of food is wasted every year. This means approximately one third of all food produced in the world is never eaten. It is a startling fact, and Tobias repeats this information with the air of a man who still cannot quite believe it. “I think what I find heartbreaking is that the resources that go into food production – land, labour and everything – in the end is also wasted,” he says. The problem is almost unmanageably global and thus the only possible response is one that grows from the ground up, a local reaction to a global concern.

Having started cooking at a young age, Tobias developed an interest in food from simple but hearty dishes: standard pasta recipes and potato-based meals. He cooked with his family, experimented with different spices and herbs, and still remembers his first attempt at spaghetti. The tomato sauce was too watery and the pasta was left swimming in a red sea of bolognese. There was more work to be done. 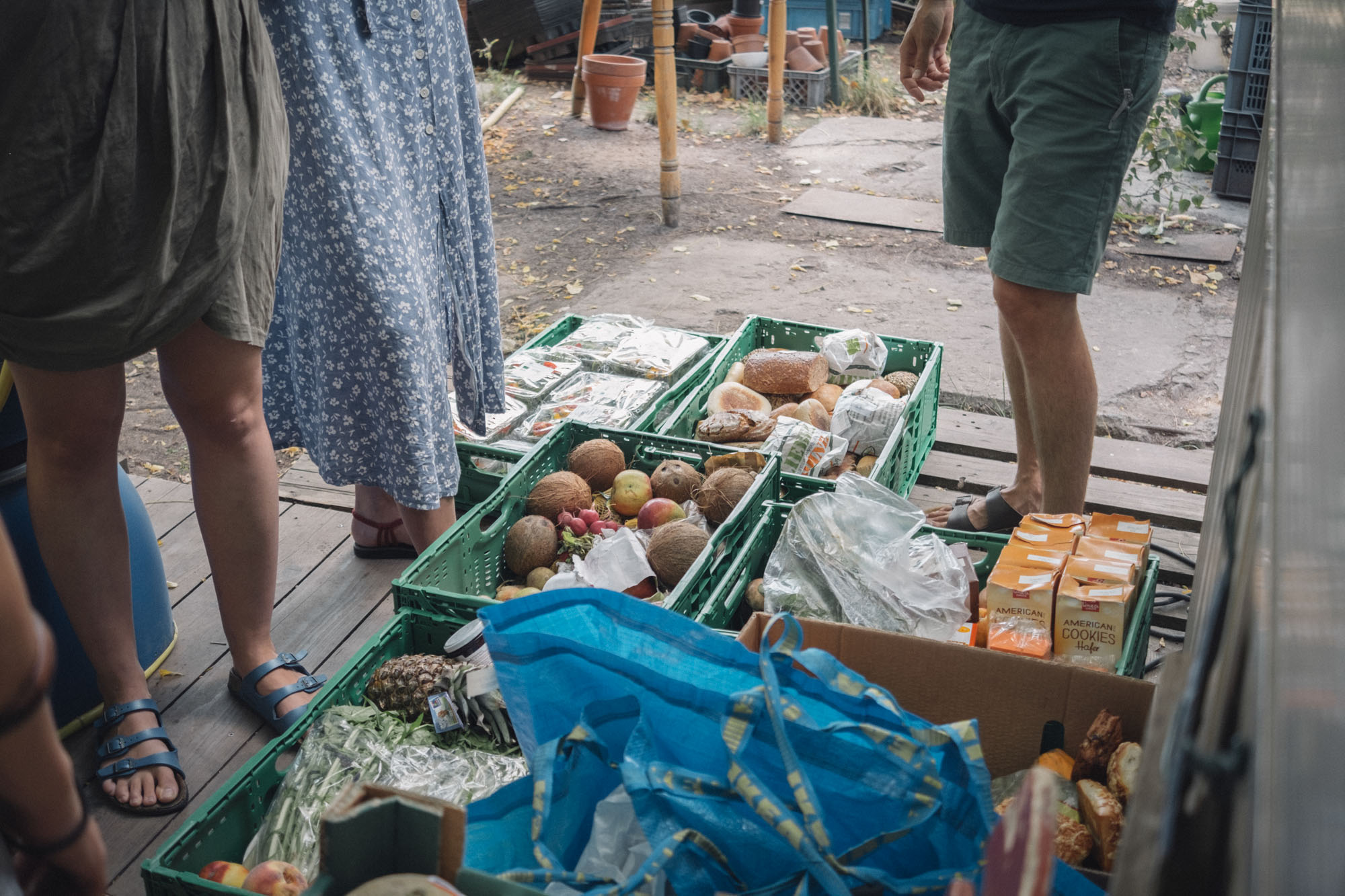 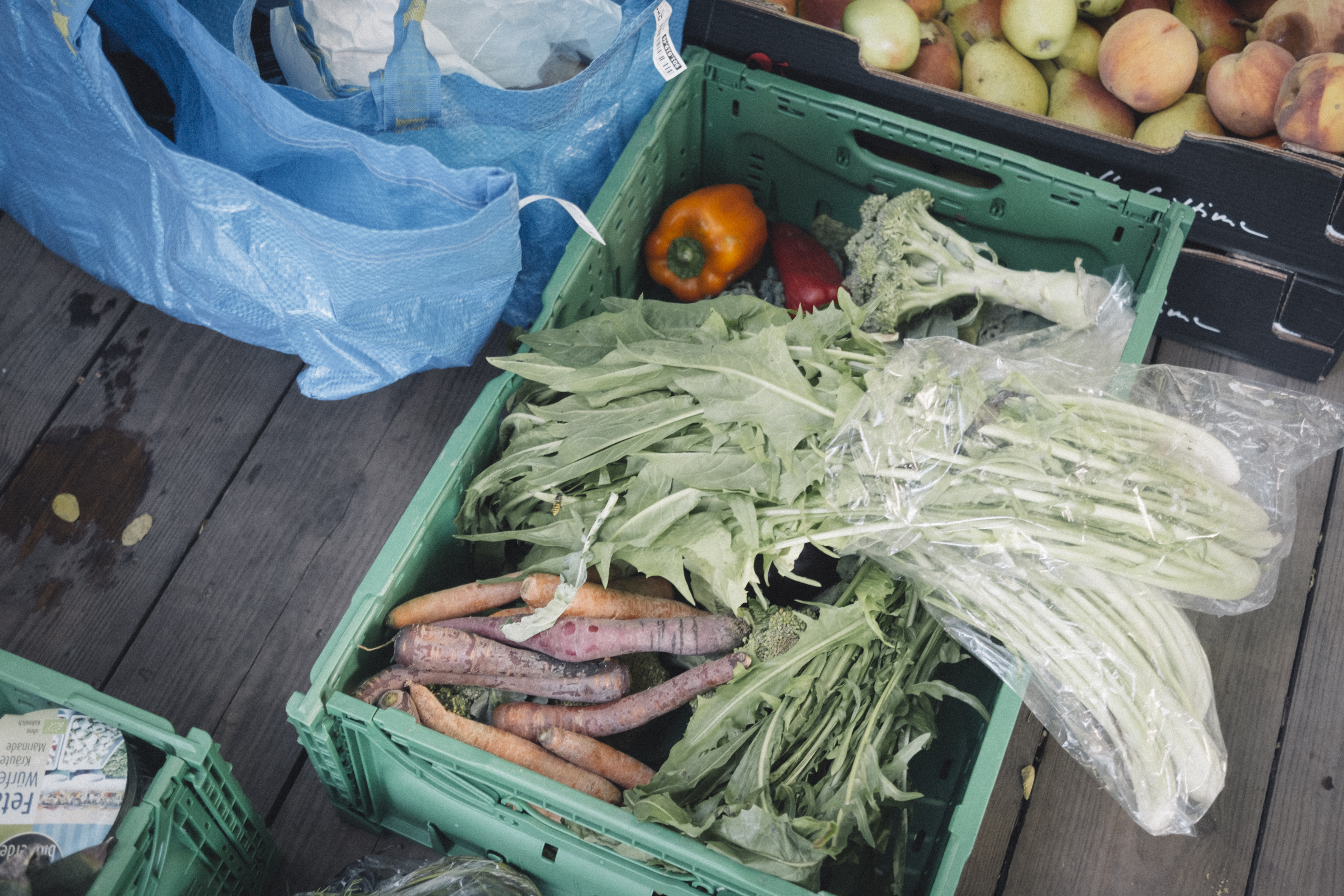 I think what I find heartbreaking is that the resources that go into food production – land, labour and everything – in the end is also wasted.

Tobias left his native Prenzlauer Berg to study social sciences in Halle and developed a keen interest in questions of political and social inequality. He travelled to South Africa for his diploma research where he met his wife-to-be. He would stay for two years before moving back to Berlin in 2014. “I originally come from a background in journalism and filmmaking, and then in Berlin I worked in project management and cultural management which was not as fulfilling for me,” he explains. Something that you learn very quickly after meeting Tobias is that his idea of fulfilling work is intimately tied to benefitting his surroundings.

One such example is the Fair-Teiler project, an early influence on Tobias that combined his growing awareness of the food waste issue and his interest in tackling inequality. Fair-Teiler, meaning fair-sharer, sets up shelves and fridges across cities and encourages people to leave and take food from them at will. “I was amazed by how good the food was,” he begins. “Perhaps it had one little spot but it was still fine produce and this was amazing for me.” When he came across the Real Junk Food Project however, something struck a chord.

It is hard for Tobias to say whether he chose the project or the project chose him, but the facts suggest that he did indeed choose it. The Real Junk Food Project rescues food that would otherwise be thrown away by big supermarkets, cooks it up into delicious treats and offers it on a pay-as-you-feel basis. Having started in the UK, the project has found legs in various different locations and a simple email from Tobias was enough to bring one into existence in Berlin. After contacting Adam Smith, the project’s founder, he was encouraged to set up in Berlin and through hard graft and utter dedication, Tobias and his various volunteers have made it happen. 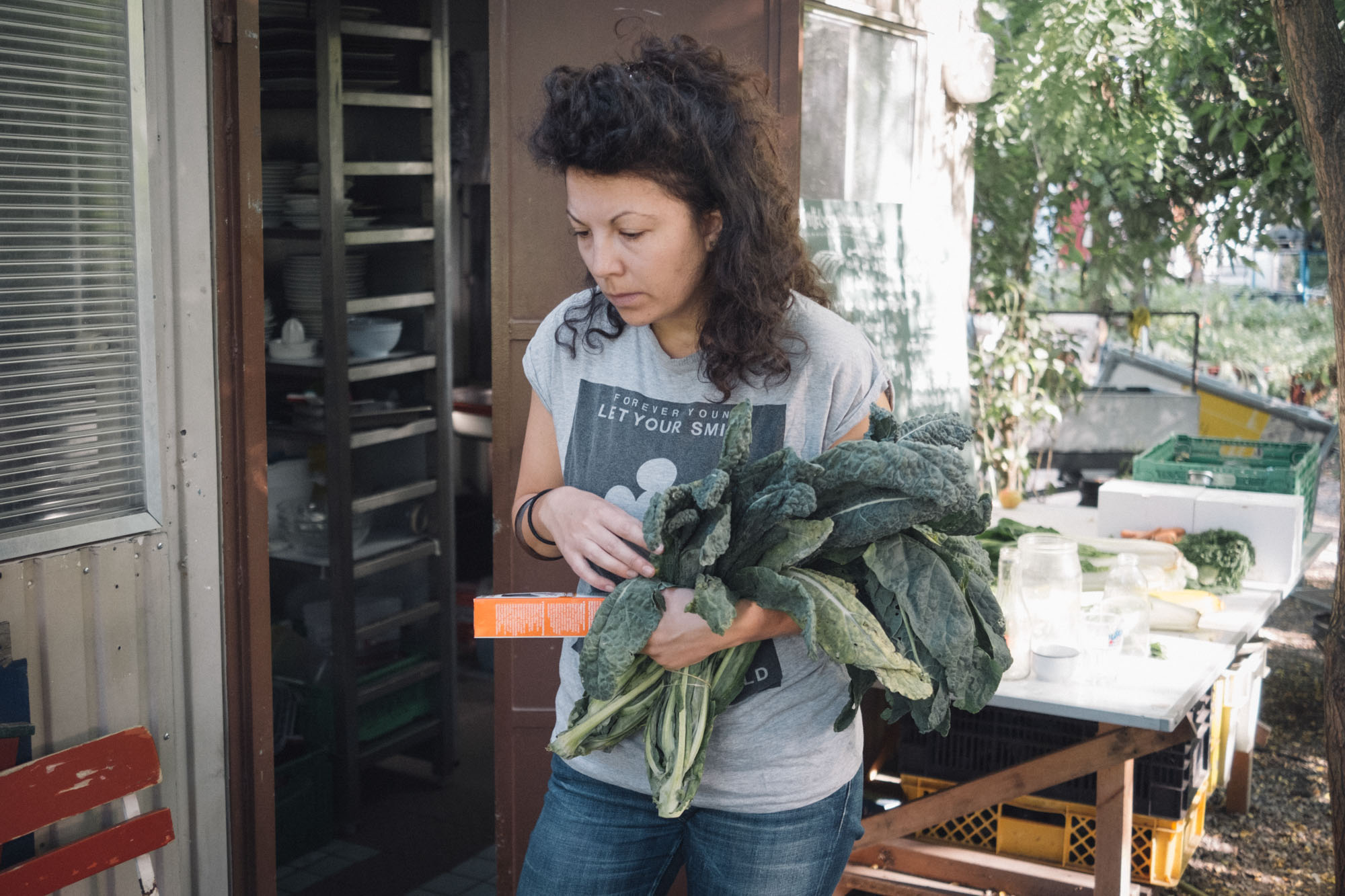 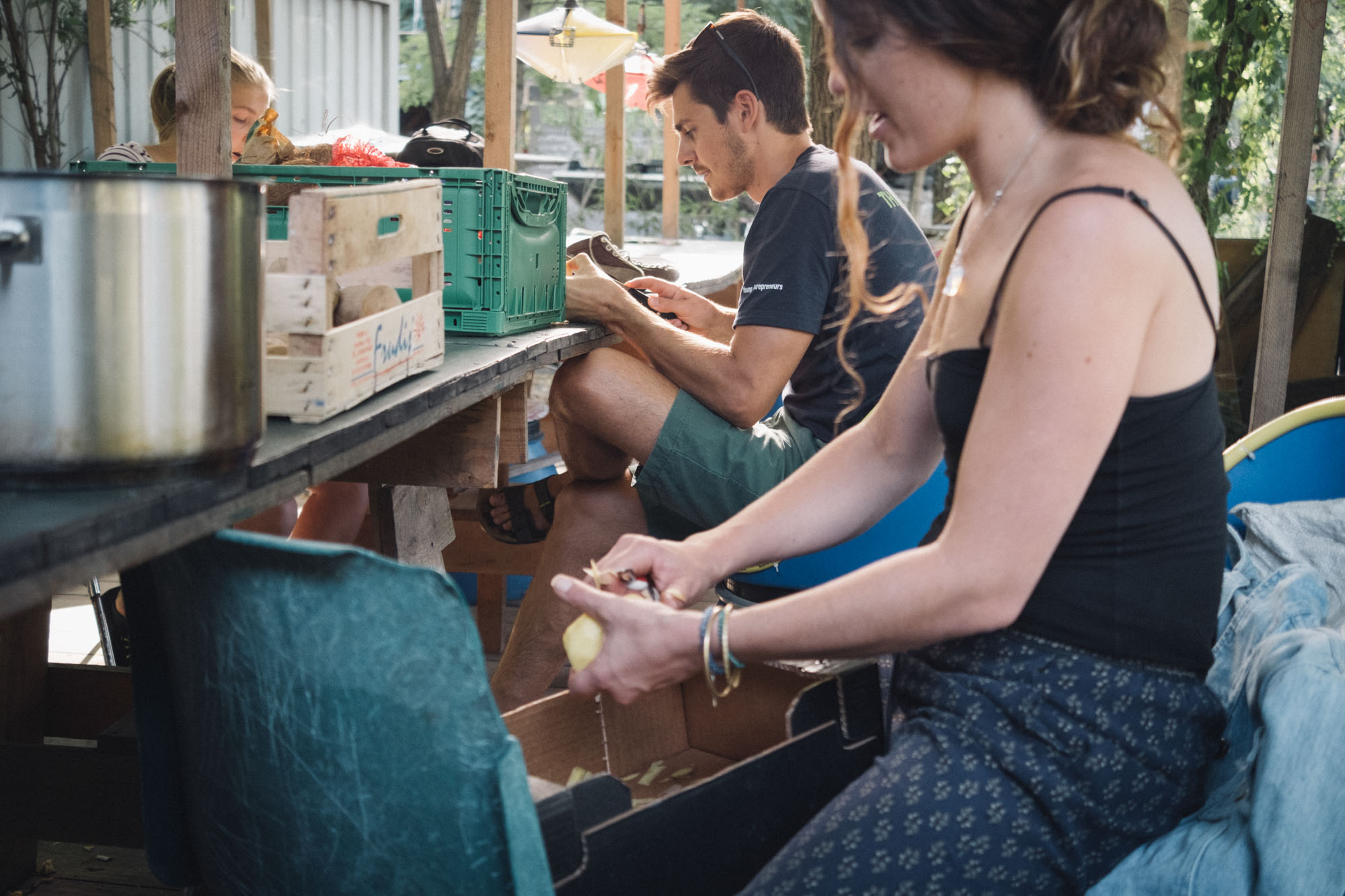 Tobias’ story and the entire project itself is replete with an almost bygone romanticism: “We have arrangements with two organic supermarkets, and we collect the food that they can’t sell anymore. It’s always a lot of bread, salad and vegetables, we usually get a good amount. It’s still a bit of a drop in the ocean, at the moment we don’t have a car, so just do it with trolleys and the train. It’s OK, but there’s only a certain amount we can carry from the stores.” He candidly tells us of a time that a fallen trolley left berries strewn across the road in Marzahn. The industry and drive it takes to transport trolleys of food across a city recalls a time before Berlin’s ubiquitous DriveNow culture, of which the trolley is an unmistakeable symbol.

Recognised as one of the greatest markers of consumer-capitalism, the project in Berlin radically reclaims the shopping trolley. It moves from being a bound object trapped within the aisles of a supermarket to a wild, free-wheeling vehicle for change. Some bizarre subversion of mass consumer culture is occurring here as Tobias and his team fight food waste, one trolley load at a time.

If transportation is the first stage, transformation is the second. With this plethora of rescued food, the team find a variety of different uses for their newly-recovered resources. The primary aim of the project is to cook rescued food as a pop-up restaurant. The team has cooked for a variety of different events, hosted some themselves and partnered with other food-sharing groups in Berlin. But it doesn’t stop there: “At the moment as part of the project, we donate surplus food to other organisations who provide for homeless people, like Engel für Bedürftige – Angels for People in Need – they set up supermarkets in which they sell this surplus food for a few cents, redistributing this food to the community. So we bring them the food, also in trolleys.” 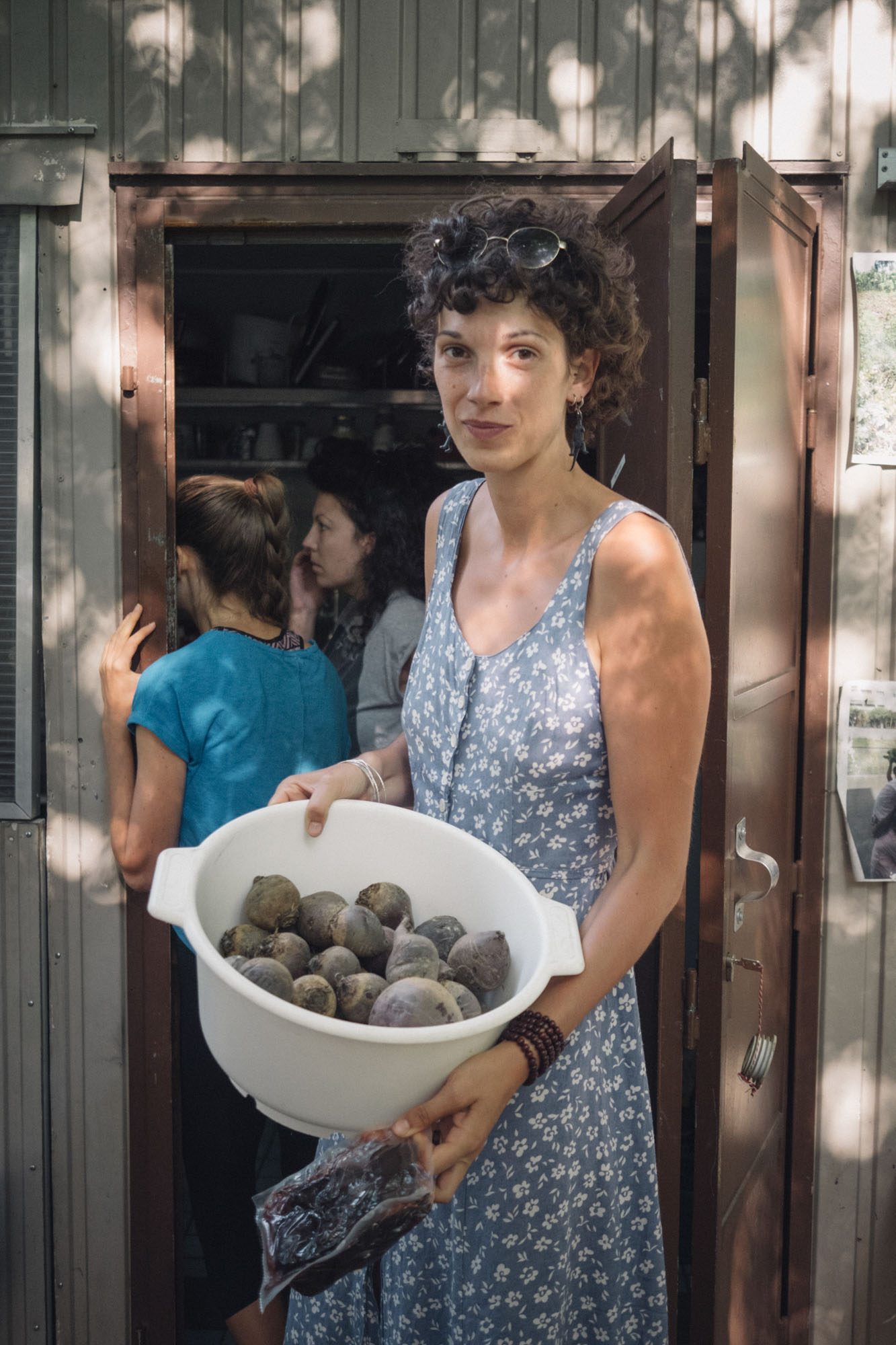 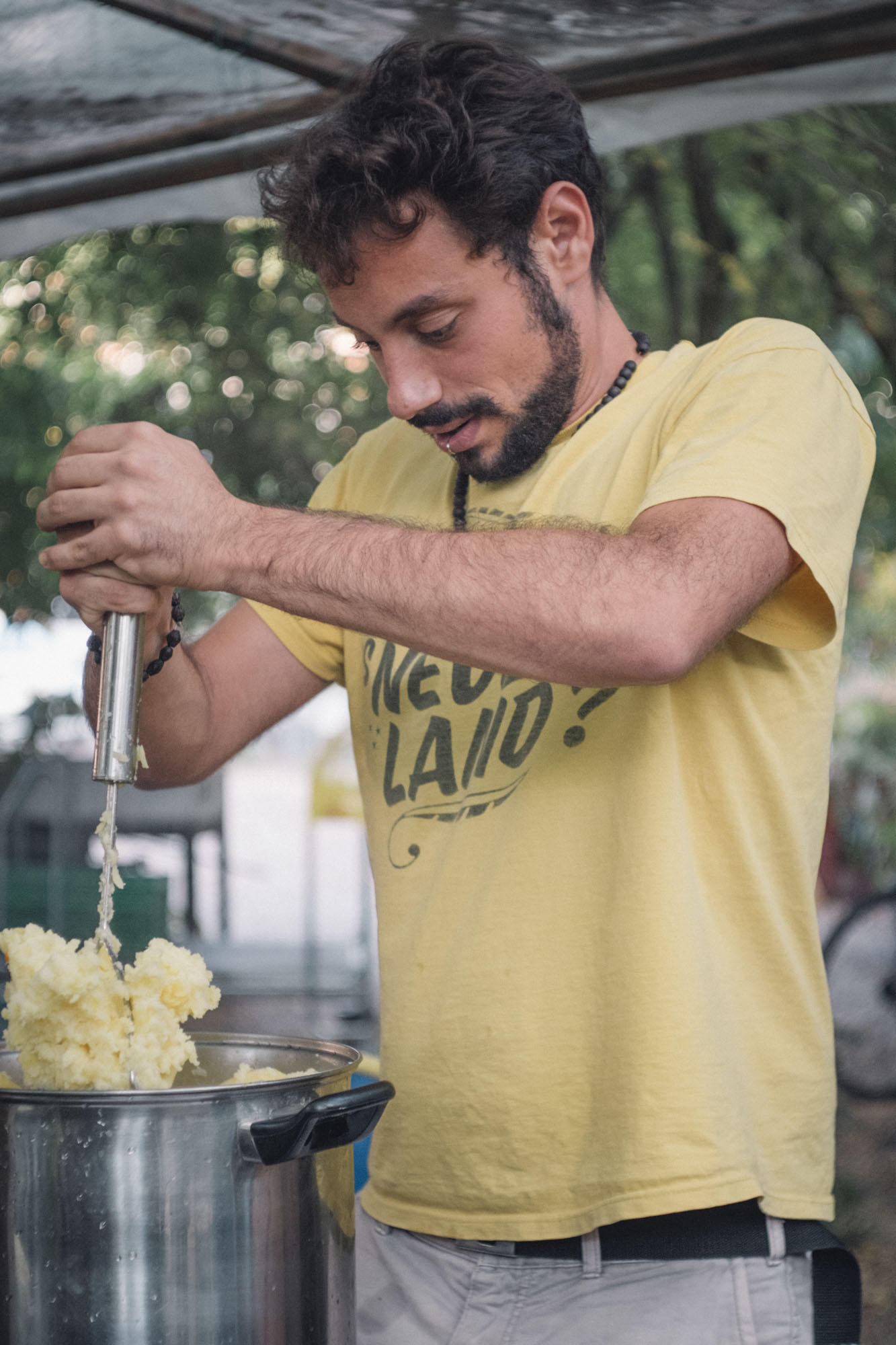 For me it is about appreciating the food and not considering it just a product that you buy.

One of the goals of the project could be, like other Real Junk Food organisations in the UK, to set up a pay-as-you-feel café. However, something about the permanence of a café doesn’t seem to excite Tobias. “It would be great to have a food truck because it means you can be flexible and move around to different locations,” he says. Having a food truck does seem more in keeping with the spirit of Tobias’ project, where everything is about flow and movement of food and people, and most importantly a consciousness about the way we consume.

For Tobias, there is always a duality in his approach to the project. First, there is the principle of not wasting; preserving and respecting the very nature of the food. This is deeply personal and informed not just by his work and experience but an inner belief in having a positive impact on the world. In his unassuming yet steadfast approach, Tobias is simply inspirational. Secondly, there is the human aspect, creating connections between volunteers, encouraging a consciousness about consumption and finally, feeding people: “People get together and get to know each other through the cooking. It’s always a nice atmosphere as cooking and eating together always creates very strong connections.”
Tobias works with a pool of around 30 volunteers, which is a good indication of how popular the project is becoming, given that it is just over a year old. One of the elements of the work that makes it so exciting for Tobias, and for all of those who partake in the project, is the mix of people donating their time and culinary skills.

“The volunteers are quite an international team. We have students from Italy and Spain and at every event we have a different team who bring a different mix of their influences.” Tobias proudly notes that even their cooks are a diverse mix of experienced chefs and almost complete amateurs, making the whole process of volunteering appear brilliantly open and incredibly welcoming. “I am really amazed when the team starts working to see what they come up with – it’s like a beehive buzzing.” 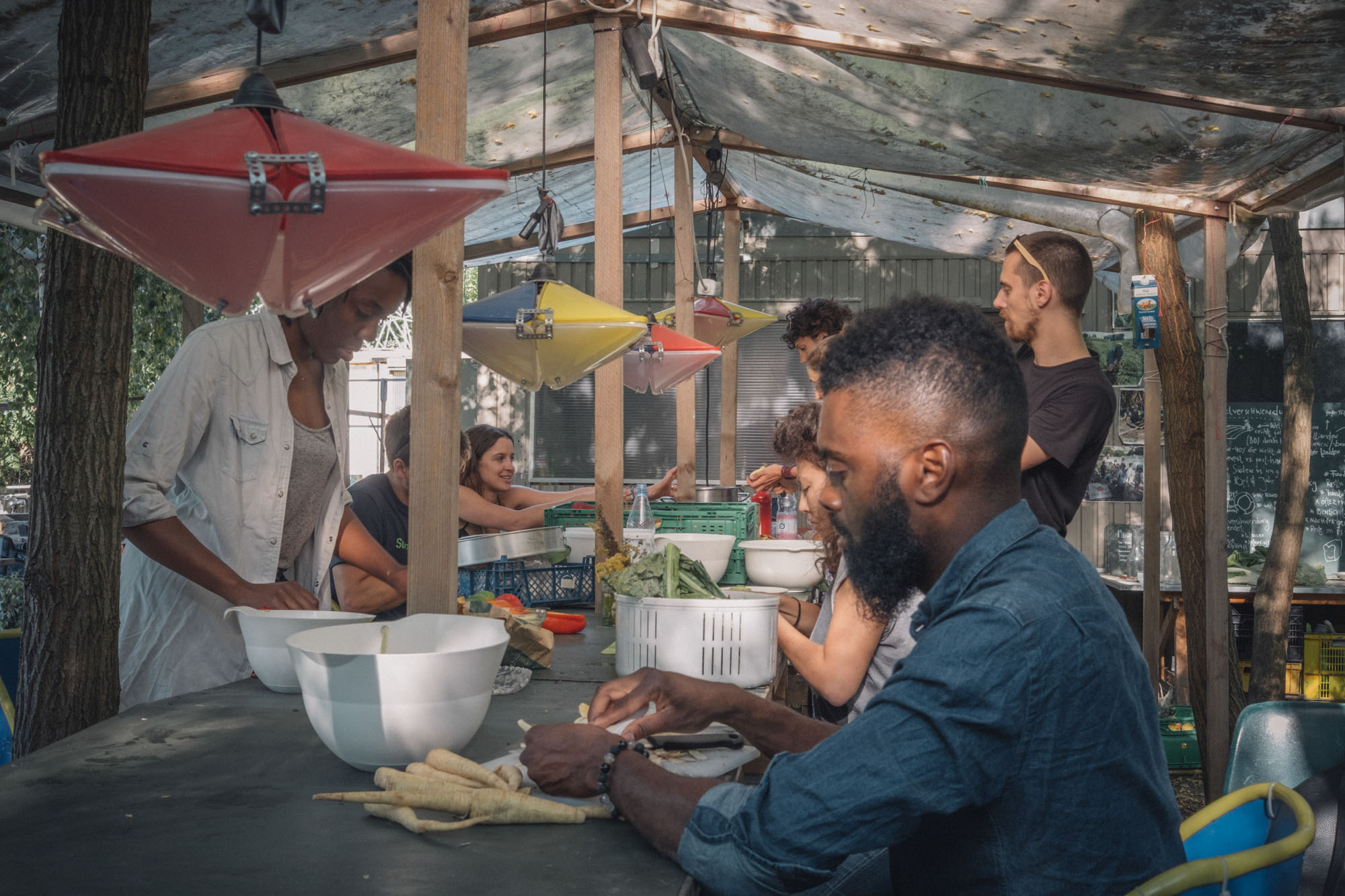 The project has also worked consistently with refugees from the Refugio Share House, where Berliners and refugees live together. When moving people means moving cultures, there is always an opportunity for exchange and interaction. For Tobias, the kitchen is the perfect place for that to happen. He and his team blend Middle Eastern, South African and European flavours with whatever other influences their volunteers bring. “We work with Cooking for Peace who also do intercultural cooking events. I really enjoy that and support it. We have other organisations that work in the sustainability field, or the social impact field so it is becoming a little network.”

Something about Tobias’ approach to the entire project leaves such a strong impression that it becomes almost impossible not to believe in it. Throughout our discussion he references a number of different organisations related to the project, and it becomes clear that the food consciousness movement in Berlin has a strong backbone of support. With dedicated figures like Tobias, it feels as though we are in safe hands, and yet we should not relax our efforts. There are trolleys out there that need liberating, stomachs that need feeding, food that needs saving and minds that need changing. He concludes, “for me it is about appreciating the food and not considering it just a product that you buy. It is an essential thing for all of life.” Tobias’ statements are so sincere and honest that you begin to question how you have not yet reached the same conclusions.

Keep up to date with the Real Junk Food Project Berlin via their Facebook page and website. Tobias Goecke will be appearing at BedTalks Berlin on Friday, November 29 at The Student Hotel. Get tickets via Eventbrite and attend on Facebook. 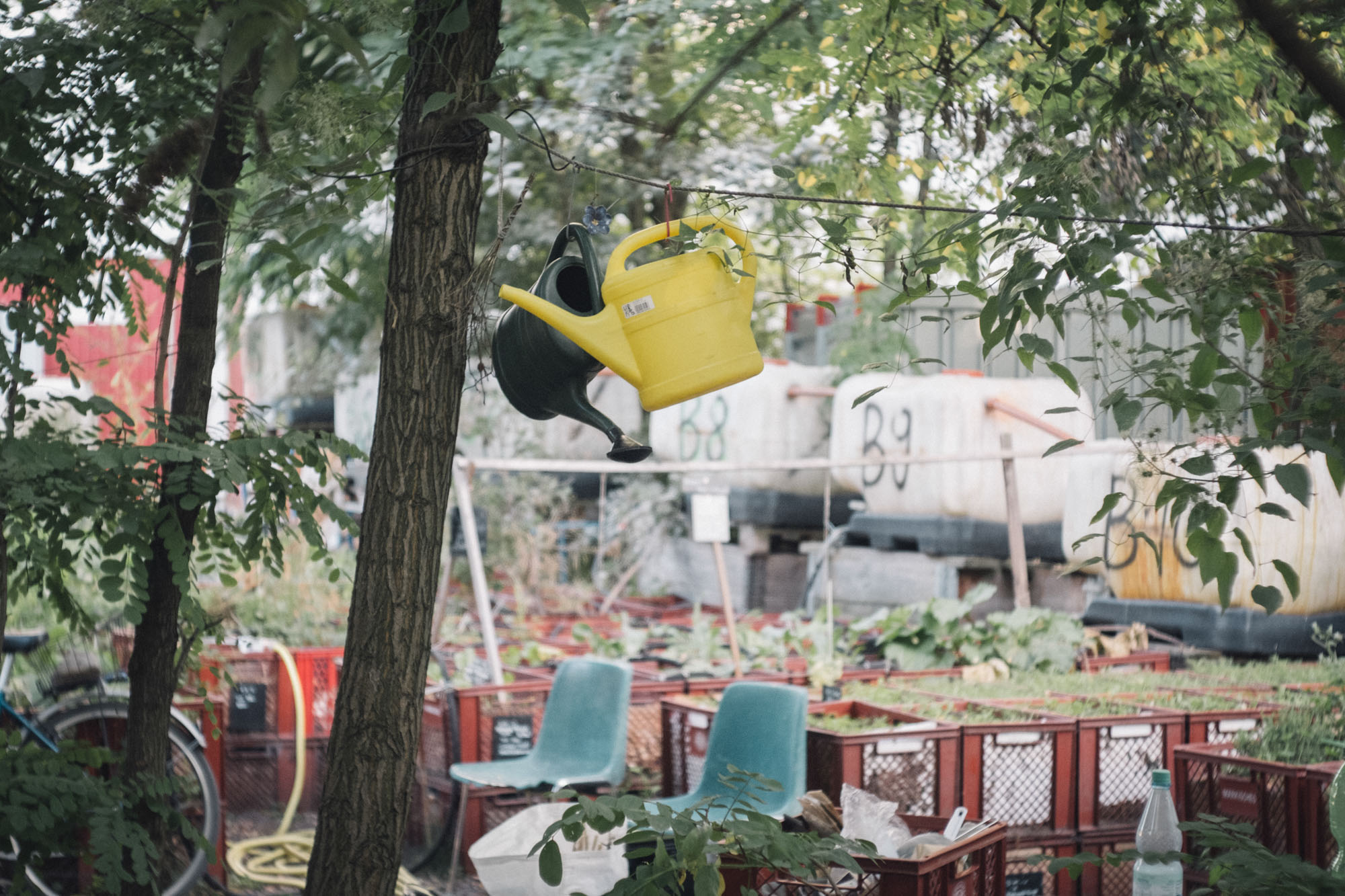