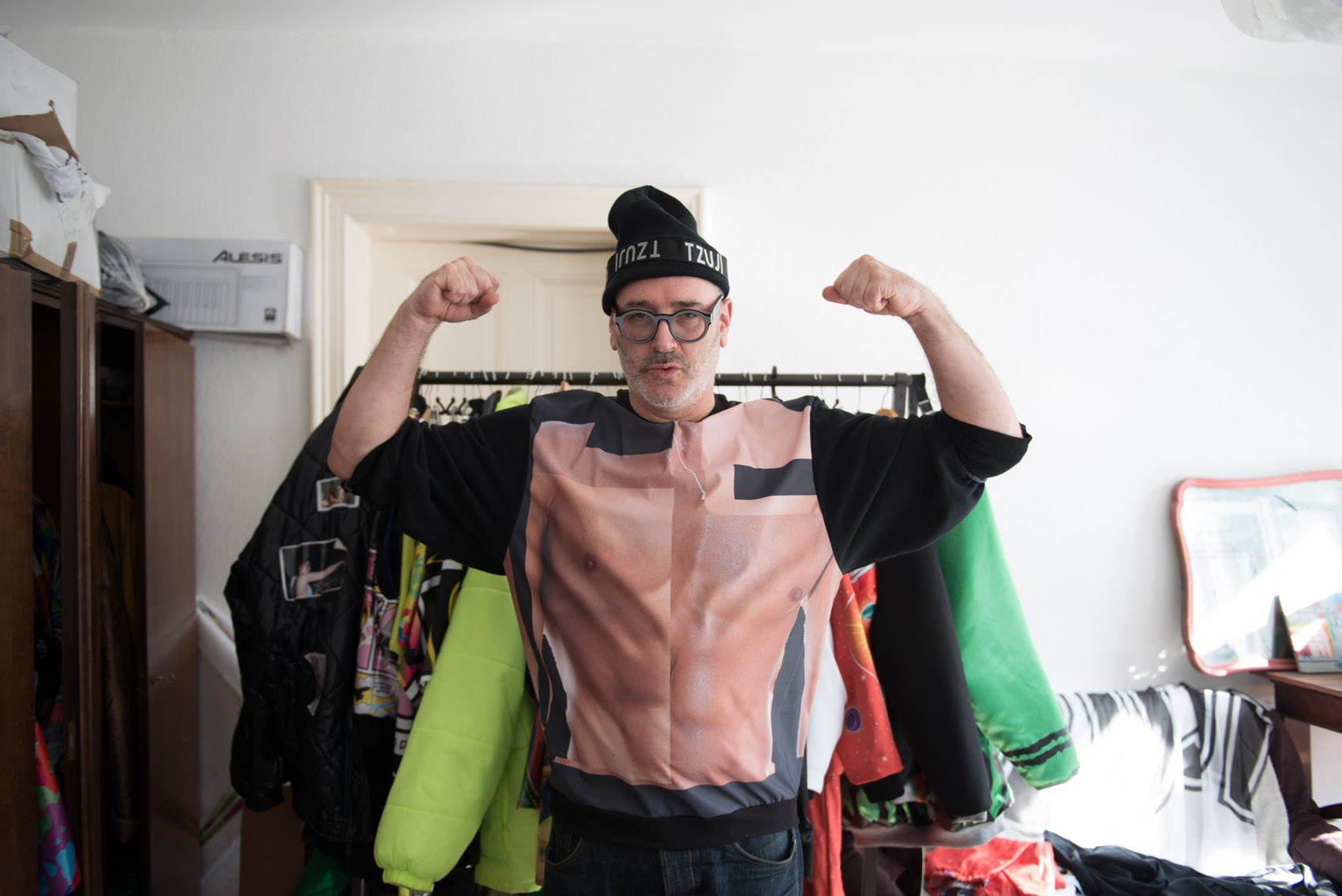 How many people can say they are friends with legendary drag star RuPaul, partied as one of the (in)famous Club Kids of NYC, coined the name for an entire music genre, have a successful career as a DJ and music producer, and run their own fashion label? Probably just one, and that person is Larry Tee.

For Larry, it all started back in Atlanta, with some of drag’s biggest names. Alongside friends RuPaul and Lady Bunny, he made his move to New York in the late ’80s, and that’s when things really began to flourish. Amidst all the feathers and fur, the trio carved out their creative insignia through performance and music. Eventually, they caught the eye of the notorious nightlife figure Michael Alig, whose fame due to his legendary club parties in the early ’90s was later overshadowed by his killing a drug dealer. The club scene vortex sucked them in and it has yet to spit Larry out. 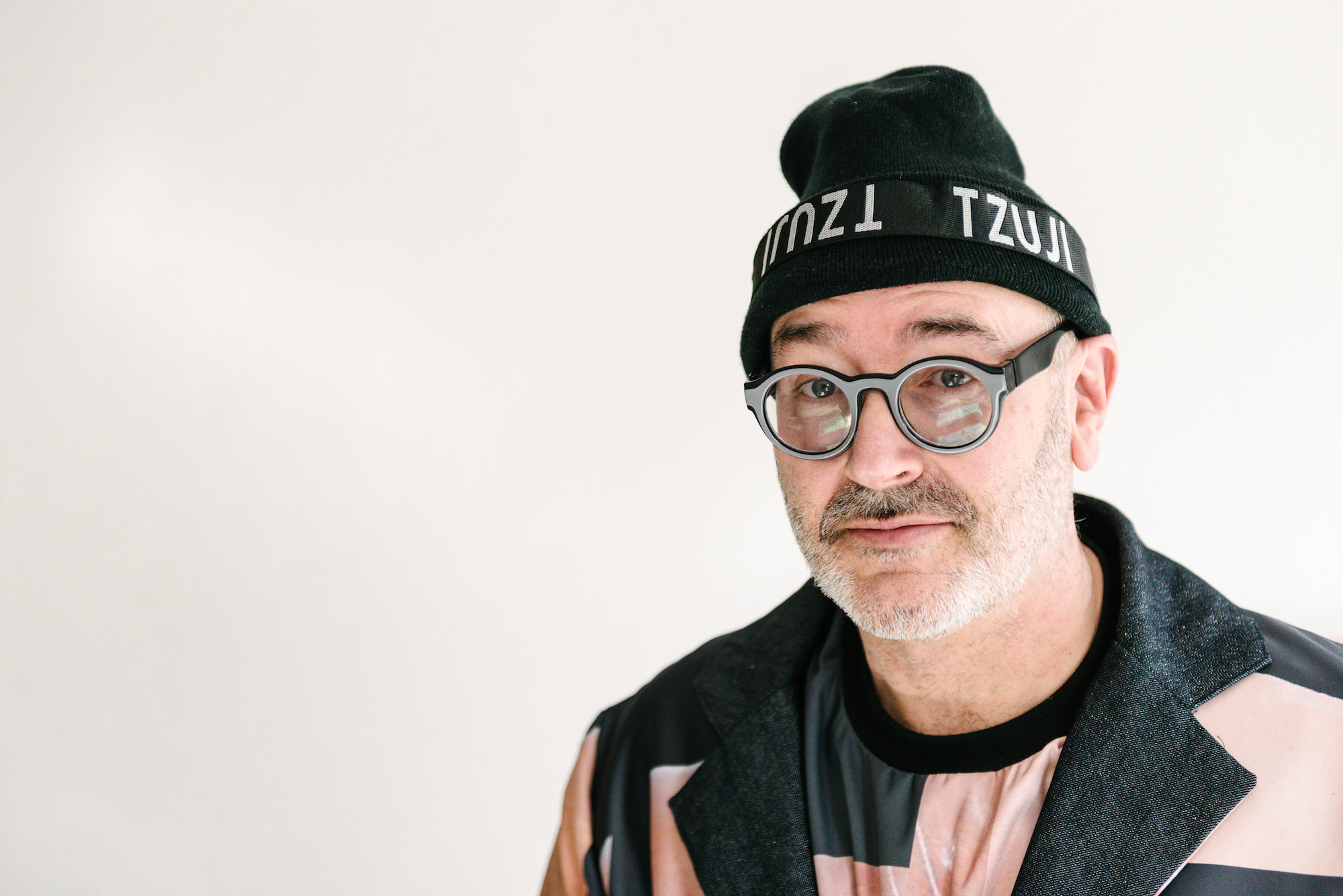 Not one to hide behind a mask, Larry is open and honest, with a brash, fizzing energy that is a refreshing contrast to the reserved iciness that one sometimes encounters in Berlin’s fashion world. Having visited the city more times than he can remember, Larry became a permanent resident less than a year ago. In that time, he has launched the new queer party KRANK, and continued to refine and expose his fashion label TZUJI. We spent some time with Larry to find out more about his colourful history and vibrant future.

Tell us more about the ‘Club Kids’ years. How did it all begin? I tend to think my involvement started when I was in Atlanta, where I became part of the scene with RuPaul and Lady Bunny. We used to dress up, but not in the way the Club Kids did; we were just dressing up to put on a flamboyant backyard show. When we all moved to New York, Michael Alig approached us because all the colourful people had just died. We roared in on a van filled with feathers, furs and bad outfits and really took over the town in two seconds. Alig saw that we had a lot of energy. Club Kids tended to be just about dress-up and we were more about performance, ideas, putting on unique parties, and making music. 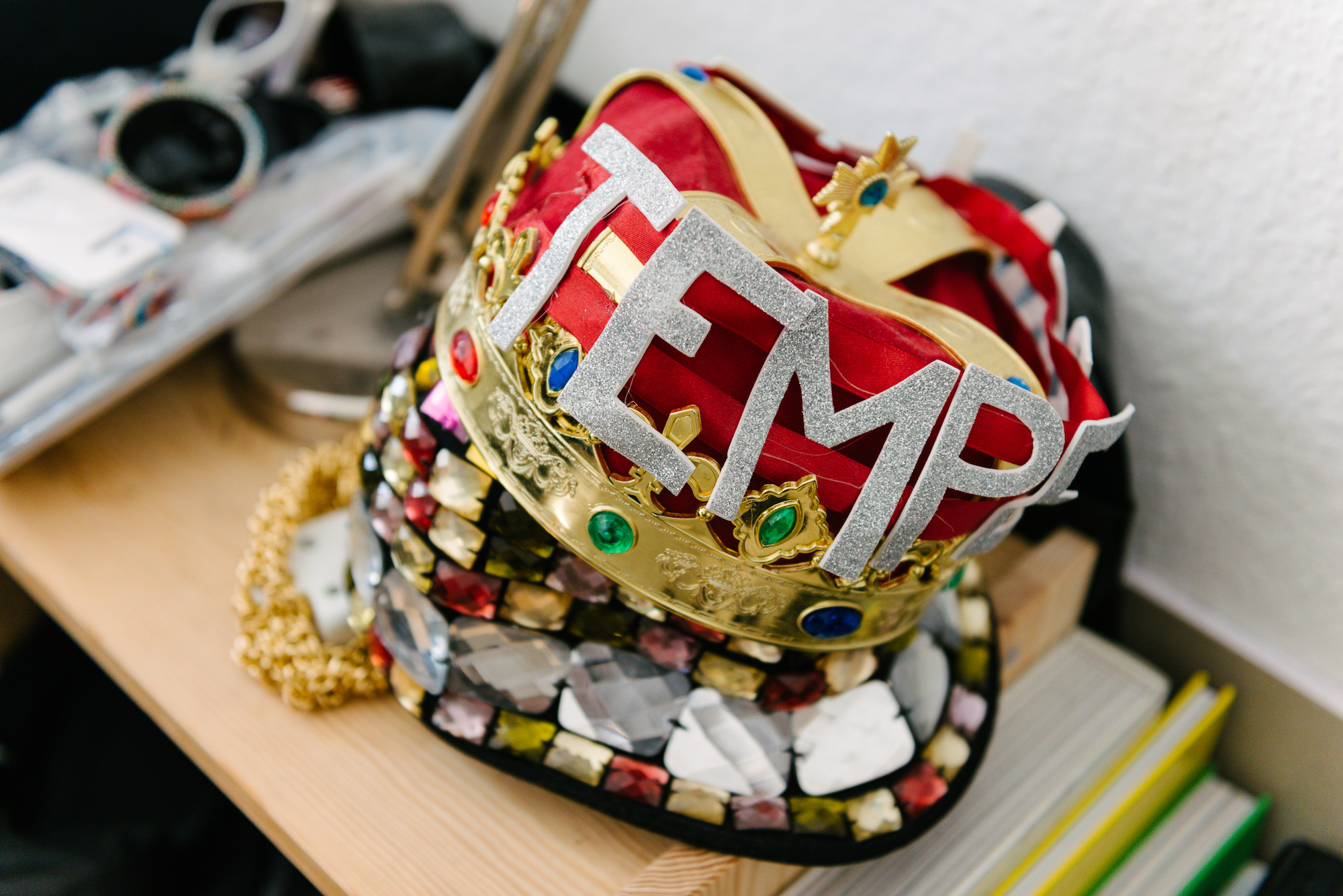 How did that evolve into DJing? The DJing thing started because in Atlanta, nobody was playing the music that was so good at the time. There was all this great New Wave/Electro stuff happening: New Order, even things like Yazoo that we think is really mainstream now, back then in Atlanta that was just craziness. If anybody played that, they were out of their minds. So, when I started it became kind of popular too; suddenly I was a big DJ in Atlanta. But the reason I’m a big DJ is because I’m ferocious—always have been, always will be. I care about the crowd and I try to move them through a musical conversation.

Can you tell us a bit about how you coined the term ‘Electroclash’? When I got clean from drugs and alcohol in the late ’90s I had to rethink what I loved about music because I didn’t like what was happening. I didn’t like trance, or tribal house and I just thought music was stuck. When rediscovering myself while getting sober and clean, I also had to rediscover what I felt musically. At the time, Fischerspooner was a local act. When I saw them live I remember feeling that fire again, what it was like to see something really creative, because it was dance and performance art. I remember just being thrilled! I felt the same about Chicks on Speed and their Riot Grrrl politics, about Peaches and her sexuality, and the big Chicago House DJ, Felix Da Housecat. Everything that was wrong suddenly became right. To me, that’s when music is exciting, when someone takes some things and puts them together in an oh-so-amazing, sexy way. I decided to do a festival to promote this new music and sound that I was so passionate about, and it needed a name. I came up with ‘Electroclash’, and suddenly every fashion magazine in the world had articles on this glamorous, flamboyant and politically modern festival, and the name stuck. How was Berlin Alternative Fashion Week? This is the fourth time that we’ve done [a show] here. It’s normally a five-minute show – you march out and that’s it. It’s almost like a hand job; it’s not enough to really satisfy. When I do Fashion Week, I always get dressed up. Then I realise that everybody is dressed in black or white – they look like lab assistants. The music goes up really loud and it’s like three and a half minutes. I tried out my new Transition Jacket this year which I’ll demonstrate for you now [puts on jacket]. I’m looking all discreet in black but, see: it’s bright green on the inside! You can have the TZUJI, but you can also run to the grocery store. The idea is to give people more for their money because there is a lot of competition in fashion.

Do you feel your music still plays a big part in your work with TZUJI? Yes, it does play an important part and the musical heritage is maybe one of the reasons why the brand actually makes sense, because you get that there is a history behind these extravagant pieces.

It doesn’t take a genius to work out that even the worst clubs here kick dust in the face of any other city.

You were in London before and New York prior to that. When did you first get to Berlin and what brought you here? Everyday I listen to Esther Hicks and she tells you how to create the things you love instead of having a life that’s given to you by accident.  After about five years in London I found myself saying, ‘God, if I could have anything in the world I would have a place in Berlin and one in LA’ but if I’m going to be a designer, which is my dream, then I want to be able to enjoy the process without feeling I have to pay a lot of money just to be living in London. I felt so pressured being there and I didn’t have any spare time. Something wasn’t working. Before I knew it, I was out of town. A year ago, I didn’t know I was going. I’ve only been here for nine months. I love it!

What are your thoughts on Berlin as a place to push musical boundaries? It’s one of the only places left! It used to be where you’d go for exile if you had alternative music views. You’d hide in Berlin and you’d get a following. Since it’s too expensive to be creative in all the big cities, it’s the last city in Europe that still has the microphone. Athens or Lisbon could be creative centres, but they’re still a little off the beaten path. They don’t have the microphone just yet. But in Berlin it’s getting louder and louder. 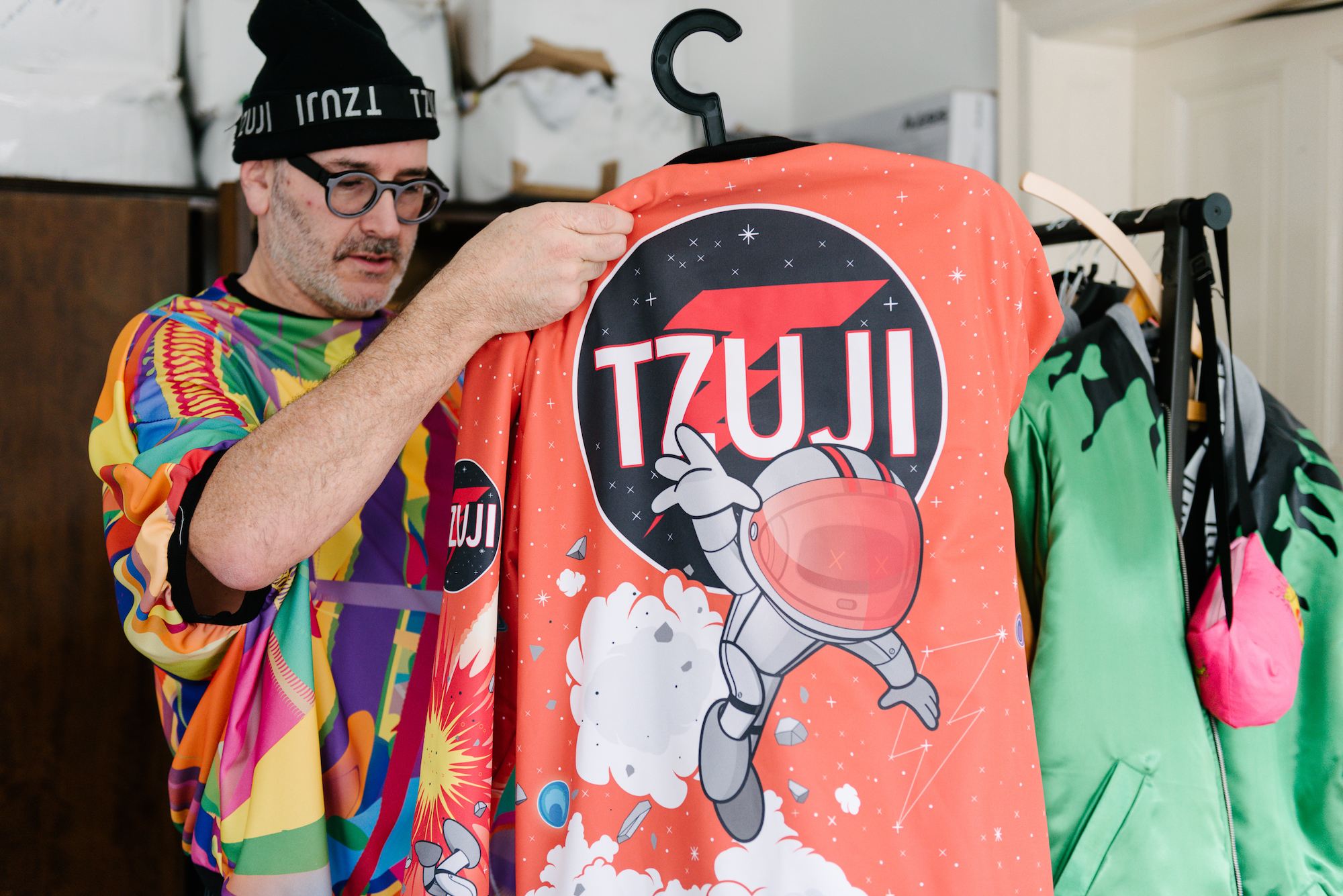 What made you start your KRANK parties in Berlin? When you run a cool party in a major city you’ll meet all the fun people: the artists, the creators, and the musicians. When I got here I said, “Well what’s missing?” I think the music is great and the options are plentiful, but I didn’t really feel like there was a place with a lot of creative people all in one spot. I sent out personal invitations to all the youngest, prettiest, all the smartest, coolest, all the creators. So when you come, you do immediately think, ‘cool crowd’. It doesn’t take a genius to work out that even the worst clubs here kick dust in the face of any other city. Berlin is the Paris of the ’20s, it’s the New York of the late ’80s, it’s the London of 2001.

Finally, if you could pick a track to get us into summer party vibes, what would it be? The first thing that popped into my mind: ‘I Feel Love’ by Donna Summer. The second is Polo & Pan’s ‘Dorothy’.

For more on TZUJI clothing head here, and to keep up with Larry’s KRANK parties and DJ action, connect with him on Facebook. The next KRANK party is taking place at White Trash Fast Food on October 1, and features the legendary Amanda Lepore..