Charitable cooking with a side of community spirit 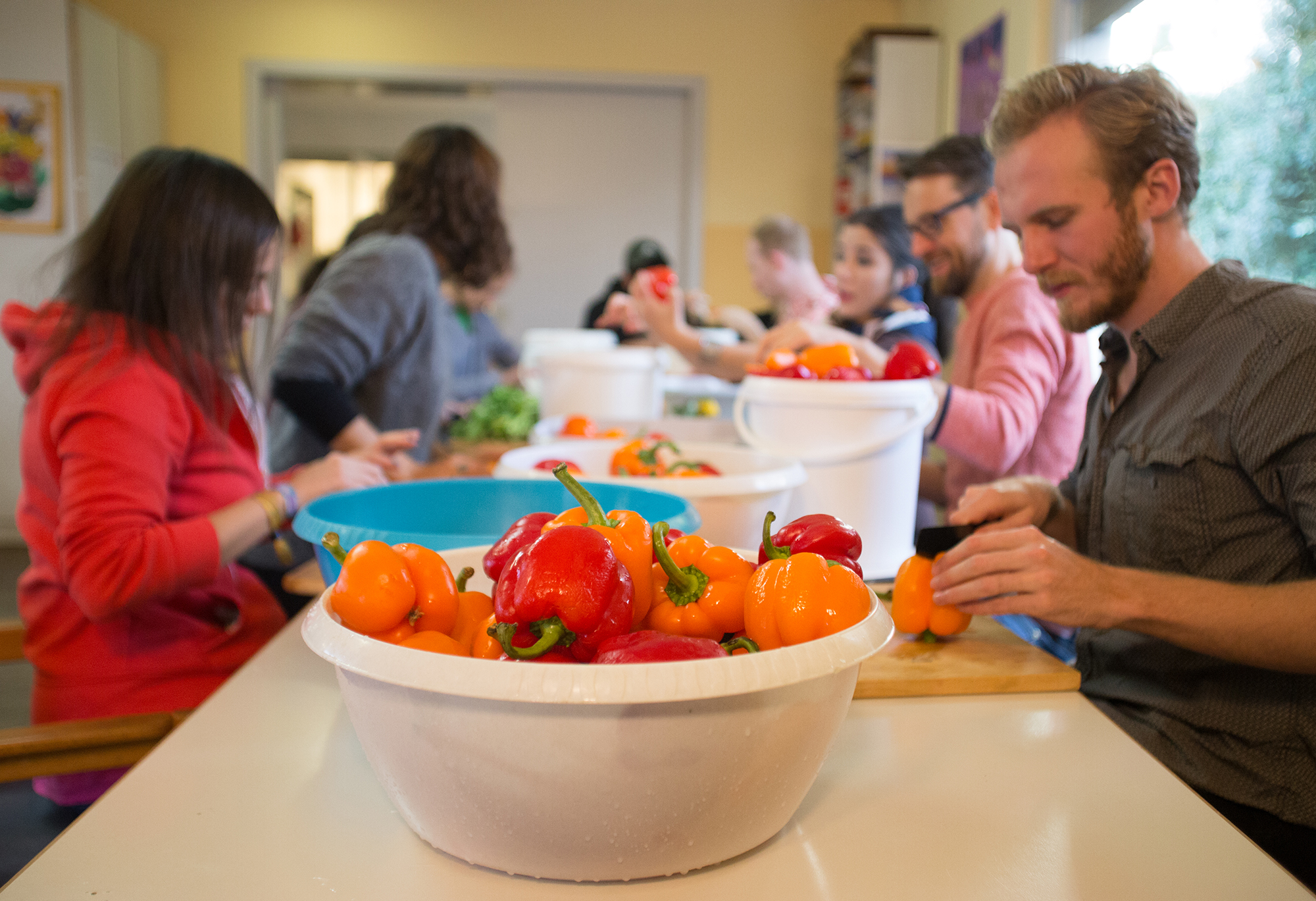 Homeless Veggie Dinners is a social project aiming to create better understanding between the poorer communities of Berlin, and the relatively affluent and financially comfortable ones. The event does the remarkable thing of bridging a social divide, simply by offering a free meal once a month.

It was founded by Dario Adamic (better known as Adam) in 2010 and has picked up some characters along the way, including head chef June Marie, dedicated volunteer Shahak Shapira and countless others. All are welcome to attend and donate, with the primary aim of providing a place for homeless people to get a served meal in a comfortable setting with a good chat. Founder Adam begins to explain the project by telling us, “The street doesn’t offer the opportunity to really meet [a homeless person] because the assumption is that a homeless person wants something from you, but when you are at a table with that same person, you are there for the same reason.” He explains, “We use food as an excuse to create contact.” This simple premise is what lies at the very heart of Homeless Veggie Dinners. 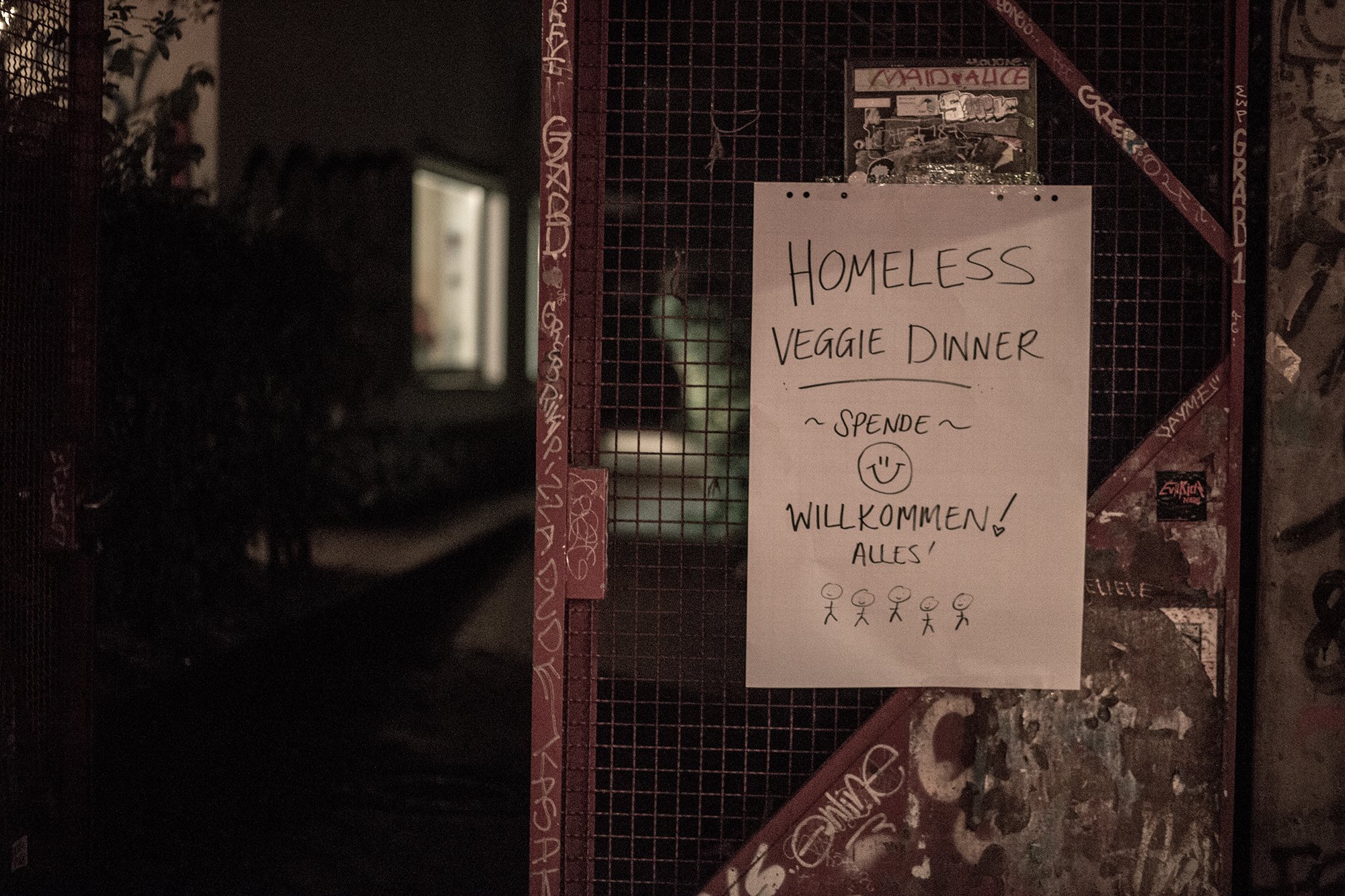 The idea is a powerful interrogation of the psychological difficulty of being homeless, and it seeks  to tackle the social and personal troubles of being poor, alone, and sometimes without a place to live. For one night a month everyone who passes through the doors of the building is made equal by their hunger and made social by an environment that encourages conversation, interaction and storytelling. Strolling around listening to the open chatter, which is punctuated by the clinking of cutlery, one can’t help but feel that there is something special about this environment that allows strangers to connect with one another. While the majority of the work behind the scenes is immaculately organised and well-managed, the outcome seems more than the sum of its practical parts. When the clock hits six and the room begins to fill with expectant people, when the aroma of pumpkin soup rises through the air and volunteers bustle around the tables, there is a sense of magic in the place. The place is Begegnungstatte Falckensteinstraße. Although it is a community centre, ‘Begegungstatte’ literally translates as the ‘site of encounter’. The word-for-word translation offers a more accurate description of what happens here once a month. Adam moved to Berlin in 2009 from Rome, where he was a teacher. He tells us of the moment when he realised an old friend had been living opposite him for months before either of them realised: ‘It gave me a great sense of neighbourhood.’’ And in addition, their coincidental reacquaintance spawned the first iteration of the Homeless Veggie Dinner project.

“One day she said to me we have this space that is currently no longer in use,” he remembers. Then began the brainstorming. The space was already playing host to Irish swing dancing, a board games night and judo lessons all at different times: “I called a friend and told them that there was this place that has a kitchen, has a bar and a big space for people. [I said] ‘Let’s cook! Lets cook for people who really need it like homeless people.’” Like any good friend, Adam’s asked the pertinent and practical question: how do you fund this? His reply would become a cornerstone of the project. “We invite people who can pay, so that they pay for their own and somebody else’s dinner.” Eventually the entire project would become donation-based as it moved from place to place, before resting in its current location. Being donation-based is key for the project. Adam is quick to make it clear that they are not a soup kitchen, something that made it tough at first: “In the beginning it was hard to reach the homeless community, it’s a very segregated community and it’s difficult to win their trust and explain the idea.”

Guests are seated and three courses of food are brought to them. Adam recalls one homeless man who, at the end of the dinner, asked for the donation box and dropped a fifty-cent coin into it: “It dignified him to pay for his dinner.” It seems, however, that throughout its six years the project has made a name for itself in the various homeless and poor communities in Berlin. One attendee told us as he was leaving that coming to Homeless Veggie Dinners is never a mistake and always good meal. 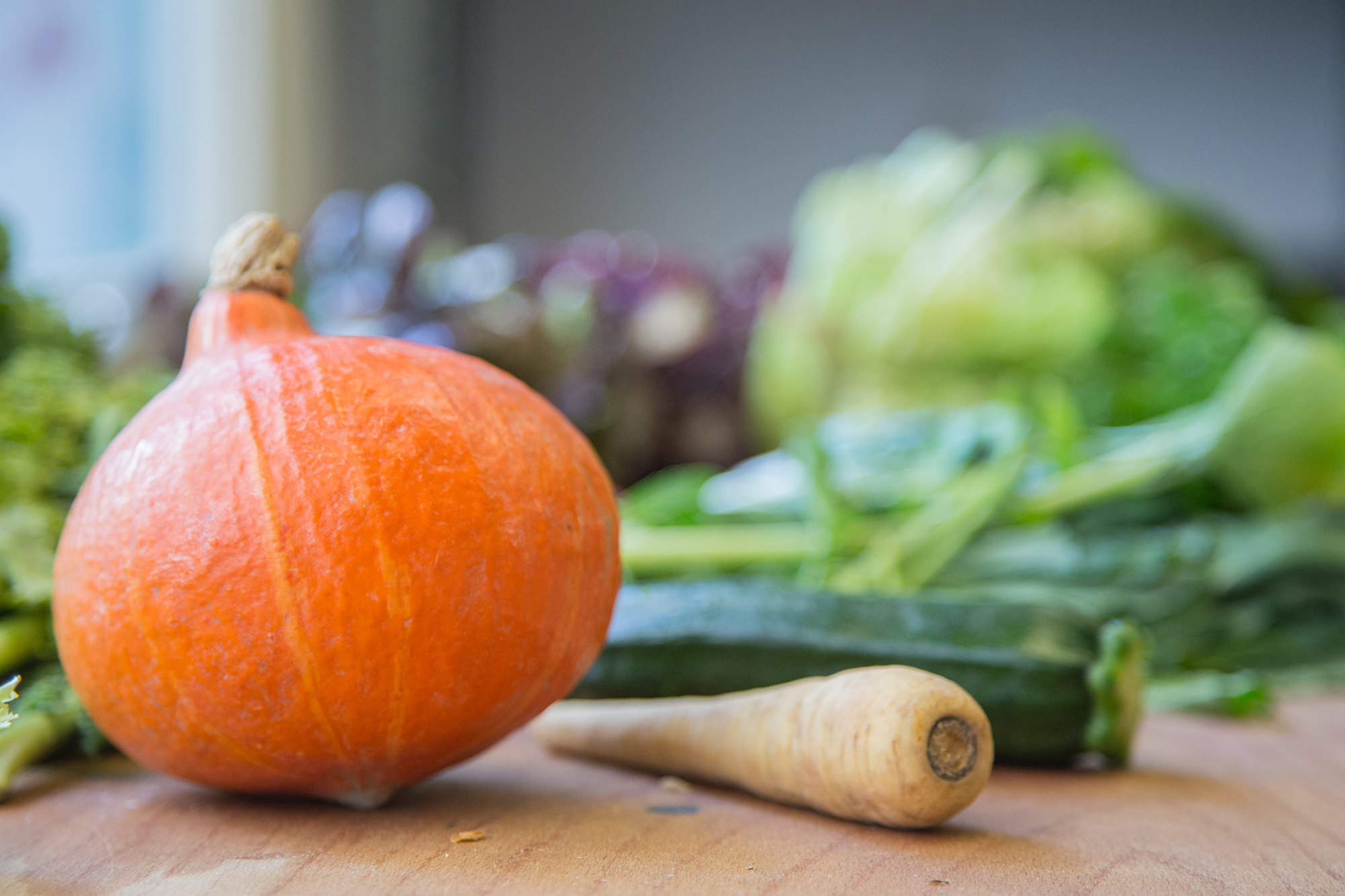 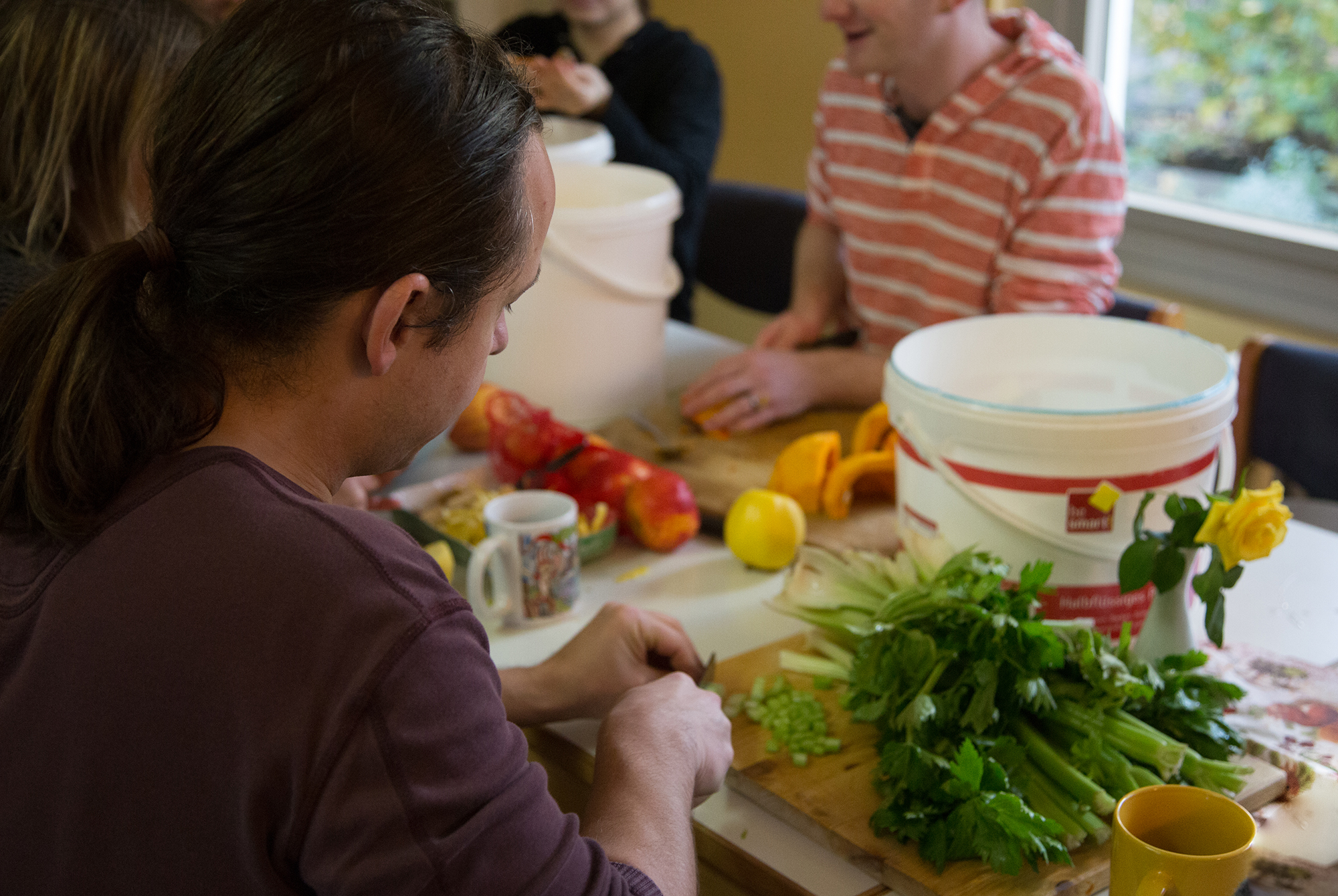 A lot of the dishes we just try because we have these ingredients that work like a Tetris puzzle for it. Word of the project spreads across the city mostly by personal recommendation, and many attendees are regulars. Why do they keep coming back? The answer varies mostly between, “It’s a nice place to meet people and talk,” and, “The food is good.” As we survey the room we see a family with young children, a group of friends chatting across the table, and conversations happening between new acquaintances. Somebody in the bathroom is fixing their glasses, and conversation skips between frame screws and the merits of older dialects of language, such as Shakespearean English and Althochdeutsch. This is just small taste of the curious interactions one can expect, and it is safe to say that the twin goals of the project are met every month; to create a space for radical barrier-breaking social interaction while feeding grateful people with delicious culinary treats.

The food itself is organised by head chef June Marie. Having moved to Berlin six years ago, June didn’t have much of a social group. She came across Homeless Veggie Dinners and was an early volunteer. She explains, “I’m not a professional chef but I’ve always loved cooking,” and her passion is shared in some sense by everyone involved in the project. June’s story is one of development as she has become more confident in her cooking, picking up new dishes from around the world that have been suggested by new and old volunteers alike: “If you had asked me then to cook a dinner for two hundred people I would have been like, ‘that’s a lot of work.’ Now I’m like, ‘we got it guys no problem.’” Now she passes her confidence to new volunteers: “We promote self-belief in people, and they come up to me after and say, ‘I didn’t think I could do it.’ Anyone can do it and we embolden them to try new things.”

The ingredients for June’s dishes are donated by large wholesalers who are unable to sell it on, and occasionally other food-sharing networks. A few days before the event, a group of volunteers go and see what quality produce can be rescued and reused. That same day June receives a message from Adam – a photograph of the food she will have at her disposal. This photo is the beginning of a creative process that involves memory, imagination and a few Google searches. “A lot of the dishes we just try because we have these ingredients that work like a Tetris puzzle for it,” June explains, recalling a bumper crop of rescued carrots that inspired a delicious carrot soup with lime and coconut, and a carrot cake for dessert. The food always varies from event to event, and one of June’s favourite moments was learning the recipe for an aubergine-based Indian dish, which has since become a staple of her cooking. 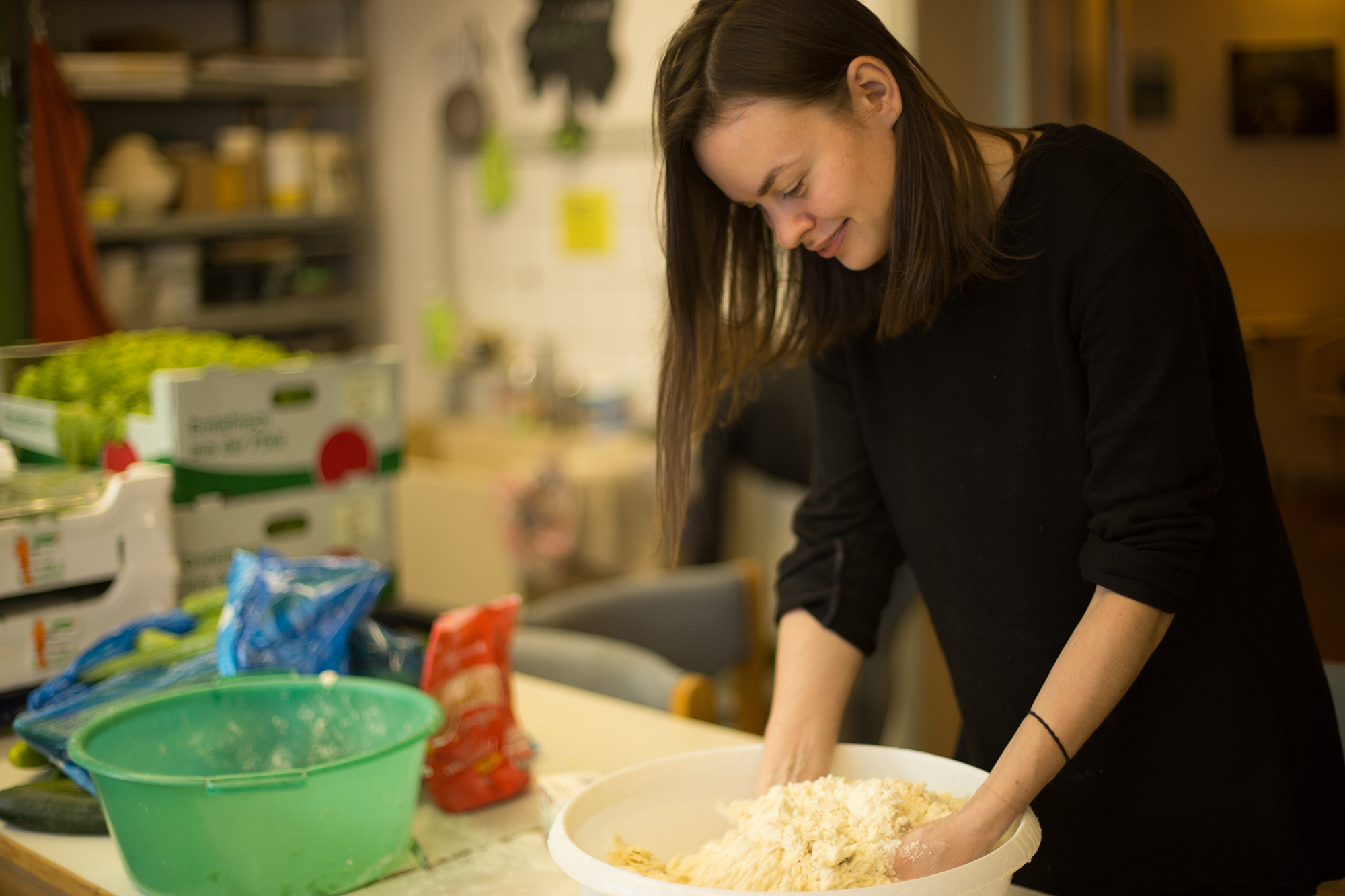 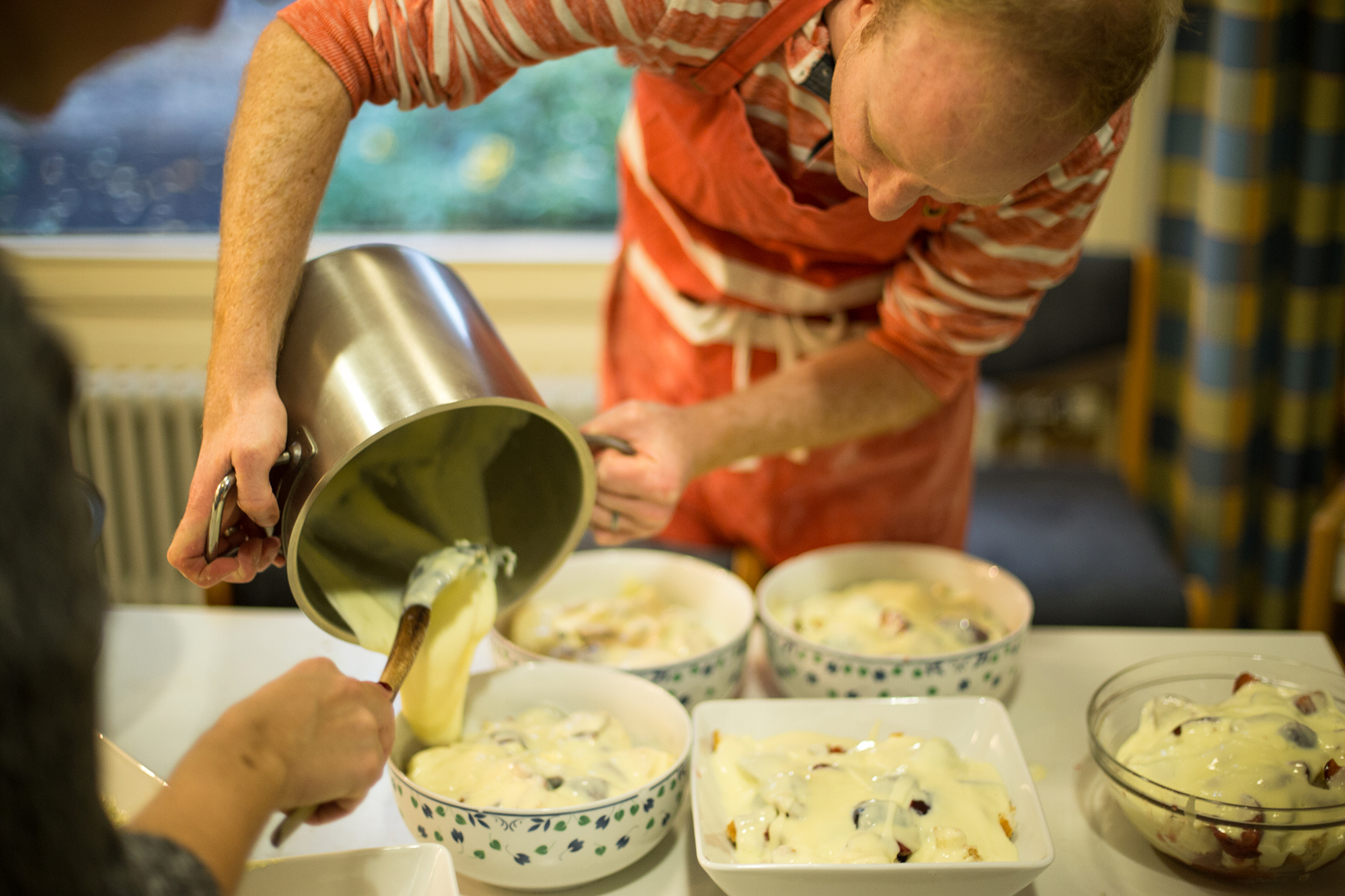 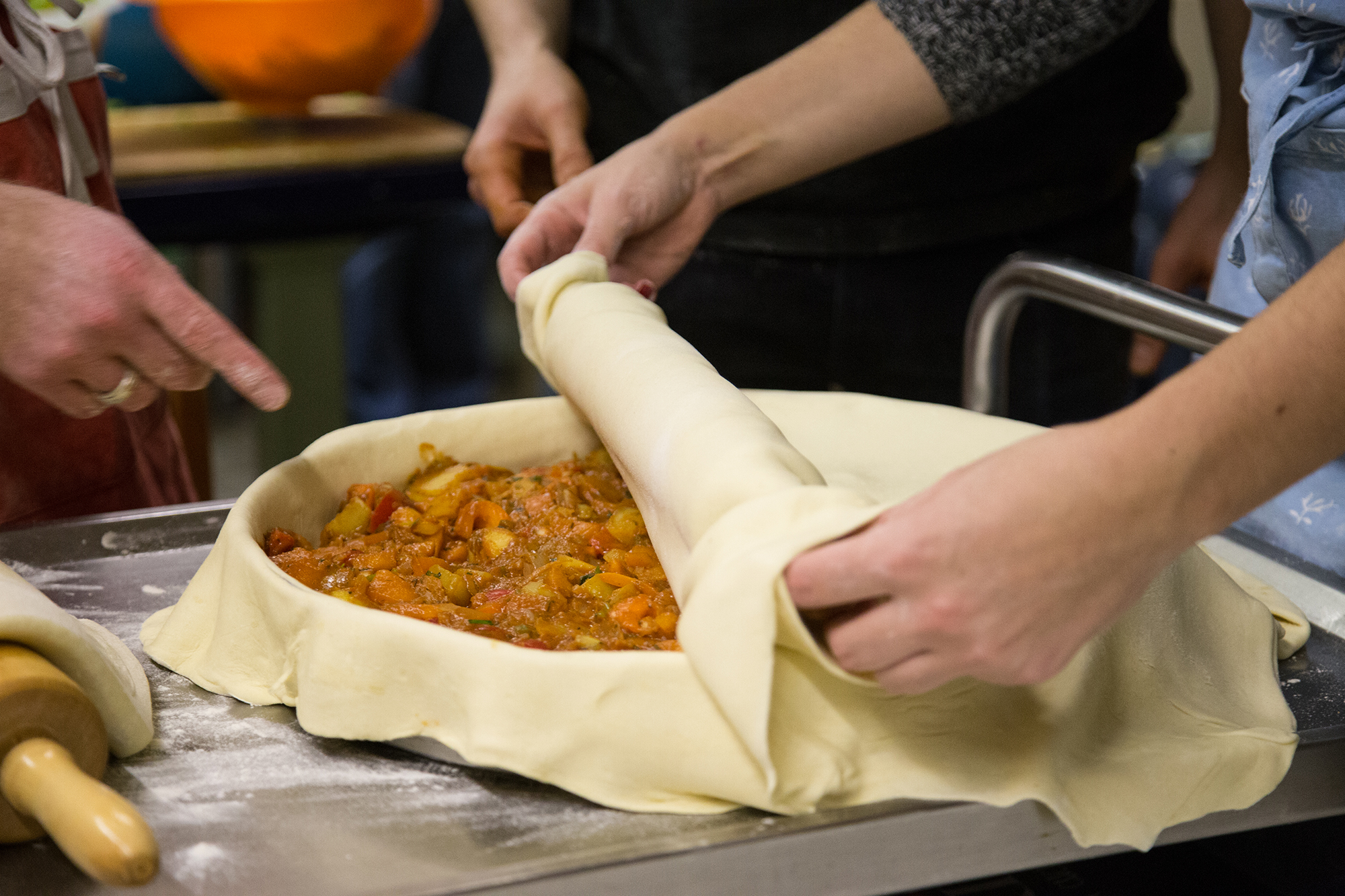 Earlier in the day the volunteers were carefully peeling and dicing the vegetables. Adam suggests that one of the main draws to the project, aside from altruism, is the opportunity to meet like-minded people. Much like himself and June who both moved to Berlin without many contacts, the Homeless Veggie Dinners project has brought people together and has created a community all its own. One of the regular volunteers, writer DJ Shahak Shapira, notes that one of the most remarkable things he’s noted since he began volunteering four years ago has been the number of people who volunteer while on their holidays. He goes on to note the surprising ease at which such an international team works: “Most people that are here volunteering are not German, but most of the guests are German and it’s very interesting to see how flawless the communication is, even though people are from all over. Incredibly the language barrier does not get in the way. It all seems to work.”

For a few hours we can get a piece of someone else’s reality that we would never find on Facebook or somewhere else.

Shahak echoes Adam’s statement about Homeless Veggie Dinners being a social project. “A lot of the people who are here are lonely and have the chance to tell stories. For a few hours we can get a piece of someone else’s reality that we would never find on Facebook or somewhere else.” he goes on to recount the story of an American man who divorced his wife, lost his job and became unemployed all at the same time, and came to the project. Someone at the evening heard his story and offered him their spare room. Stories such as this remind you of the reality that we are often completely removed from, and filtered through these stories, the project seems all the more pertinent. This site of encounter becomes a radical space in which one’s perspective can be shaken, broadened, or transformed entirely. As society becomes ever-more isolated in its social interactions, Homeless Veggie Dinners breaks barriers and offers an opportunity to break the cyber-cycle that leaves many with hardened social outlooks. 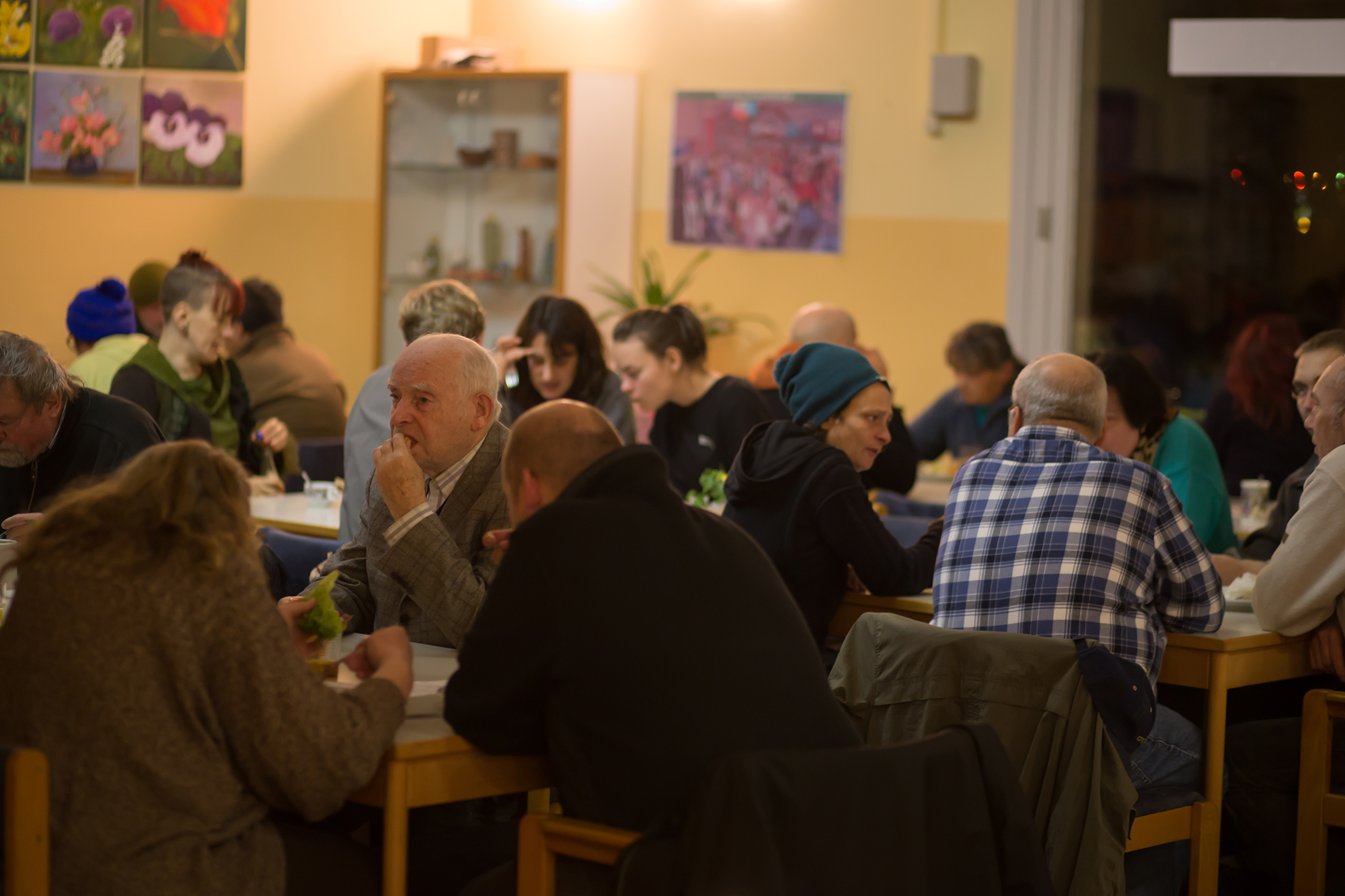 For now the event runs once a month, and Adam prefers the monthly scheduling: “It’s something special that people can look forward to, and we try to make it special by having musicians or dancers come and entertain.” Despite this, he does concede that their ultimate aim would be to have a donation-based café, in which people could come in to eat and pay as they feel, while also running the monthly event. Given that there is a growing scene of food-rescue projects such as The Real Junk Food Project, along with a growing sense of food consciousness in the city, one hopes that this kind of project can find the support it needs to realise its ambitions.

Whether you want to volunteer, attend or just find out more information, head over to their Facebook page to learn all you need.