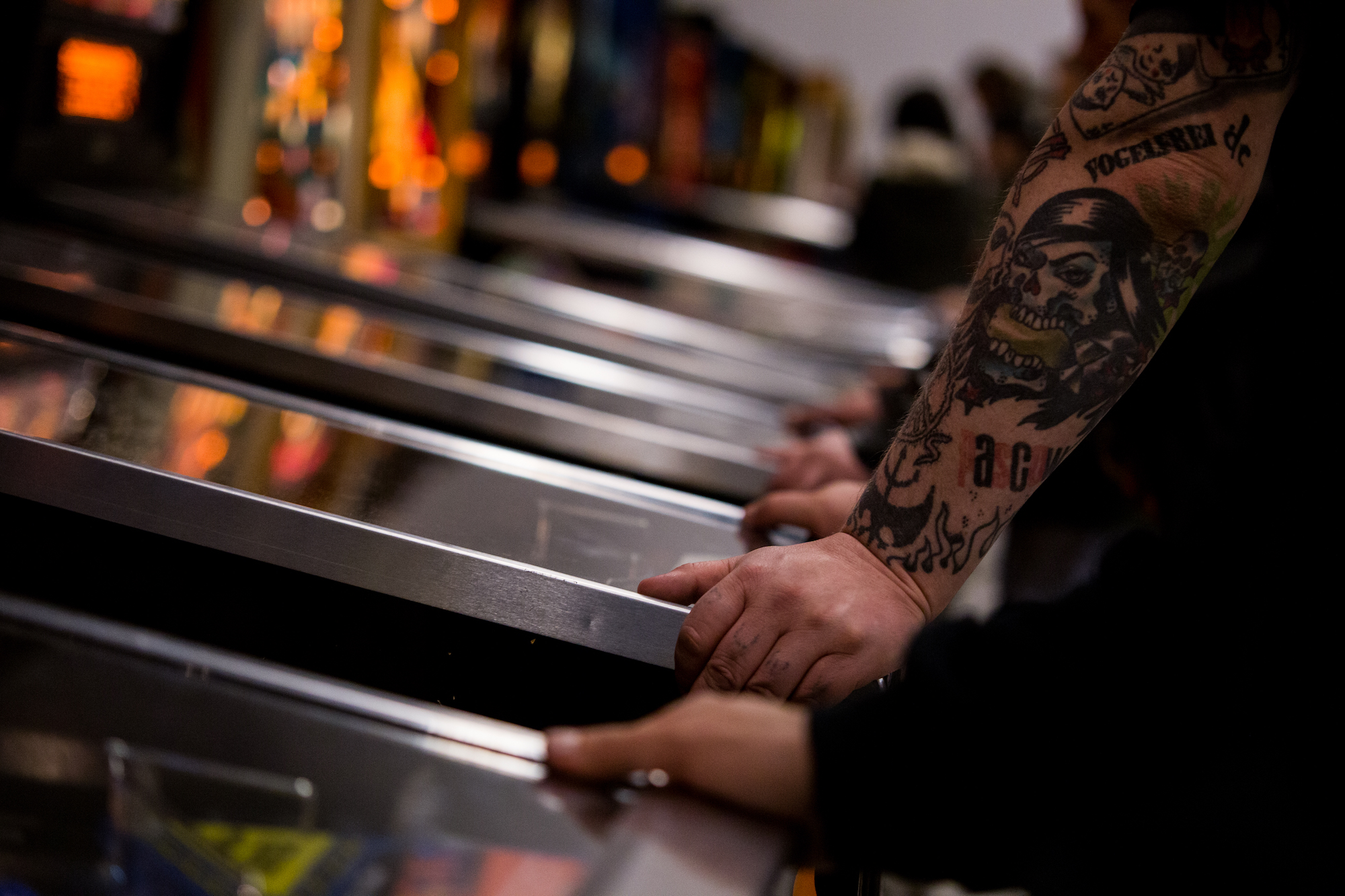 The back corners of arcades, basements, and bars across the globe are home to hundreds of thousands of pinball machines.

Some lay forlorn as their intricate web of parts give out, one by one. Others flourish in the care of tender hands and function as though they have just come off the assembly line. With the same appreciation as a vinyl collector or analogue photographer, pinball players adore these kinetic wonders of human innovation. Pinball is not a game of chance from a bygone era; it’s a combination of art and skill, at once repetitive and full of infinite variations. 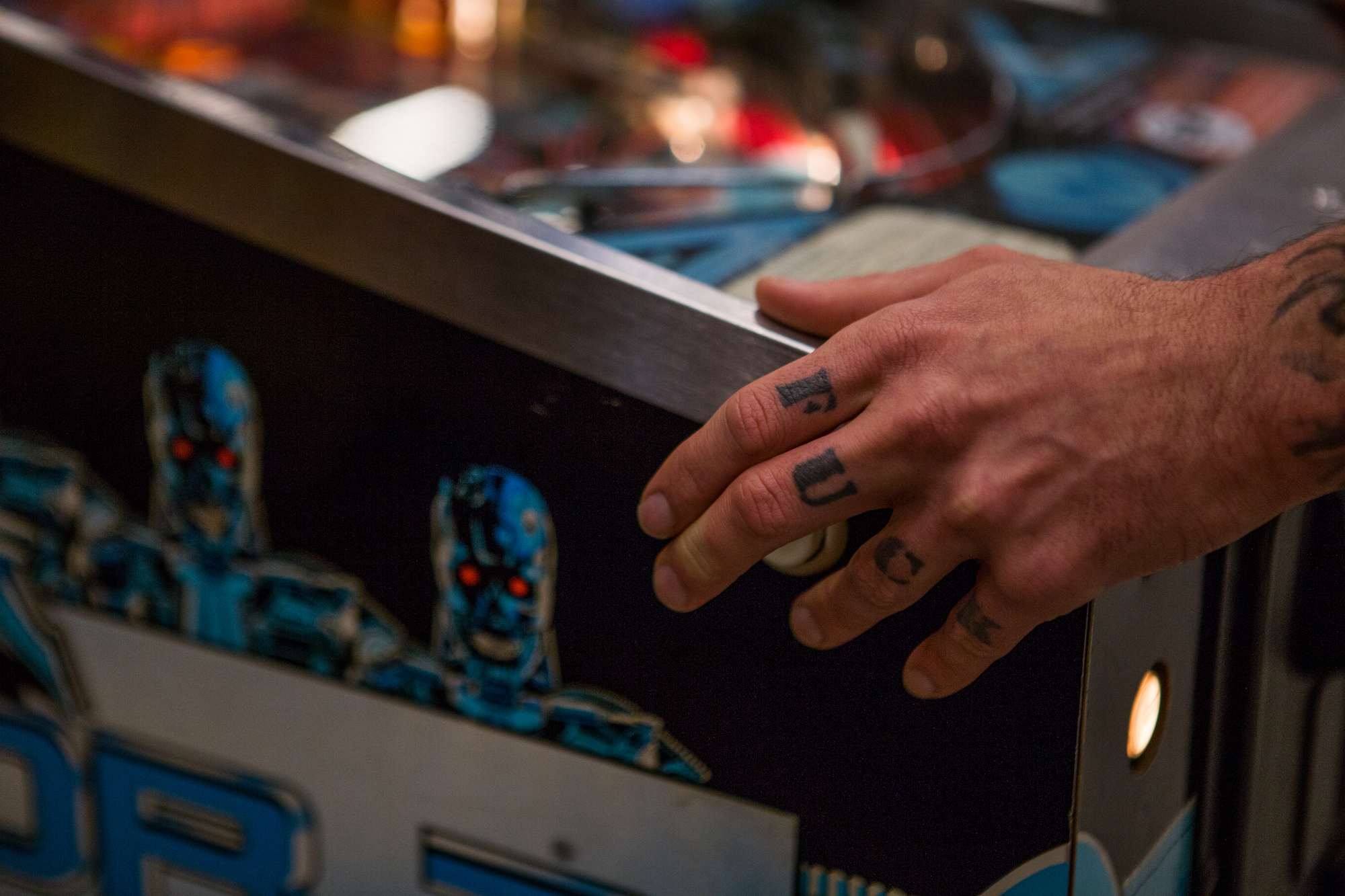 After decades of use, every machine plays differently. Repairs have been made, pieces modified to fit into place; some parts simply cannot be fixed. Each table is a Sisyphean puzzle, with players endlessly competing against their own highest score. And like life itself, no matter how good your game is, the ball always drains in the end.

Despite achieving popularity as an American phenomenon, the general consensus is that pinball was invented in western Europe during the end of the 18th century as a spring-loaded variant of the French game, Bagatelle. They called it Billard Japonais – Japanese Billiards. As it had nothing to do with Japan, the game’s title was a misnomer. In an ironic twist, however, the same game also evolved into the Pachinko machine, Japan’s most widespread and beloved form of gambling. 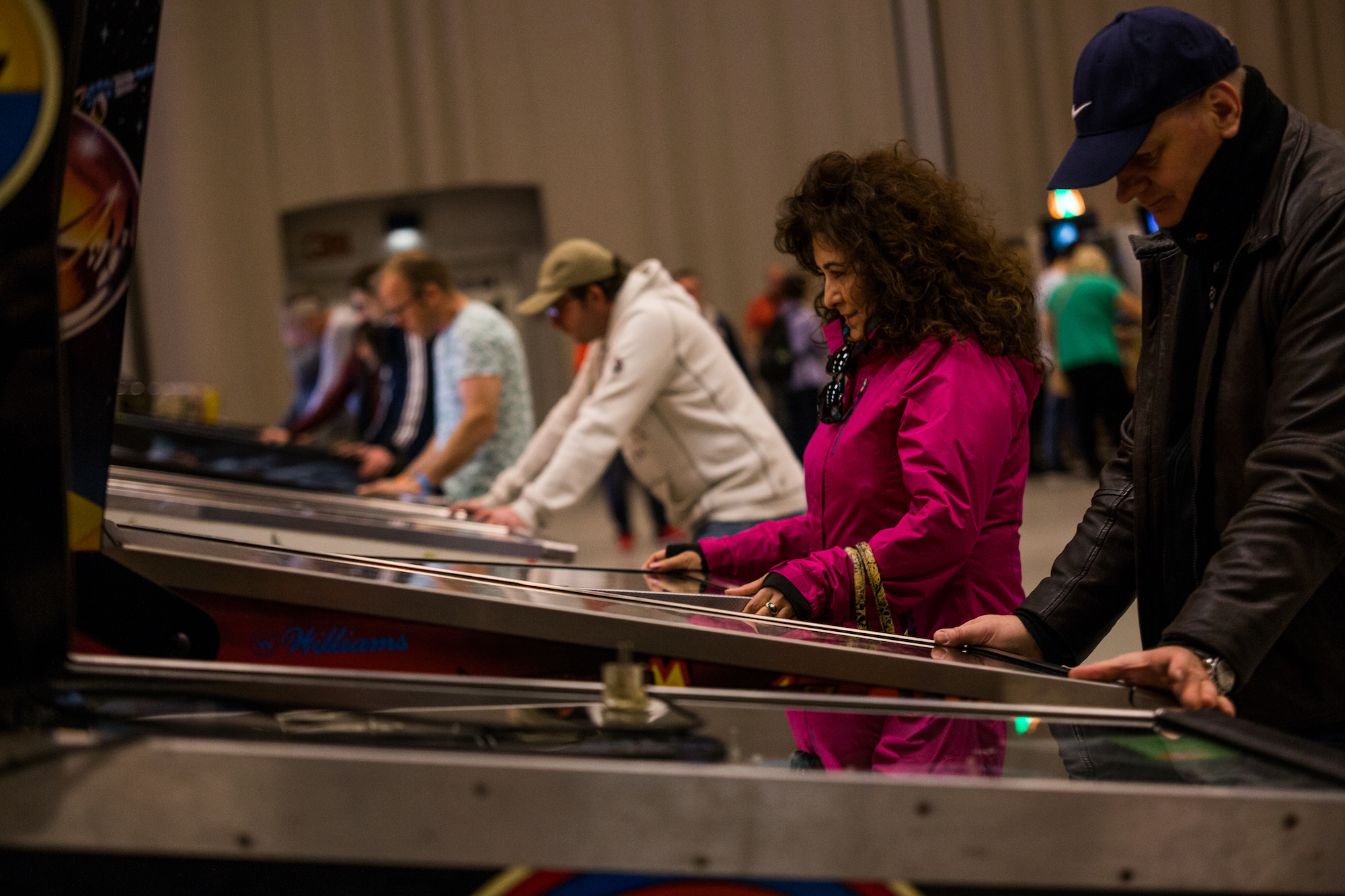 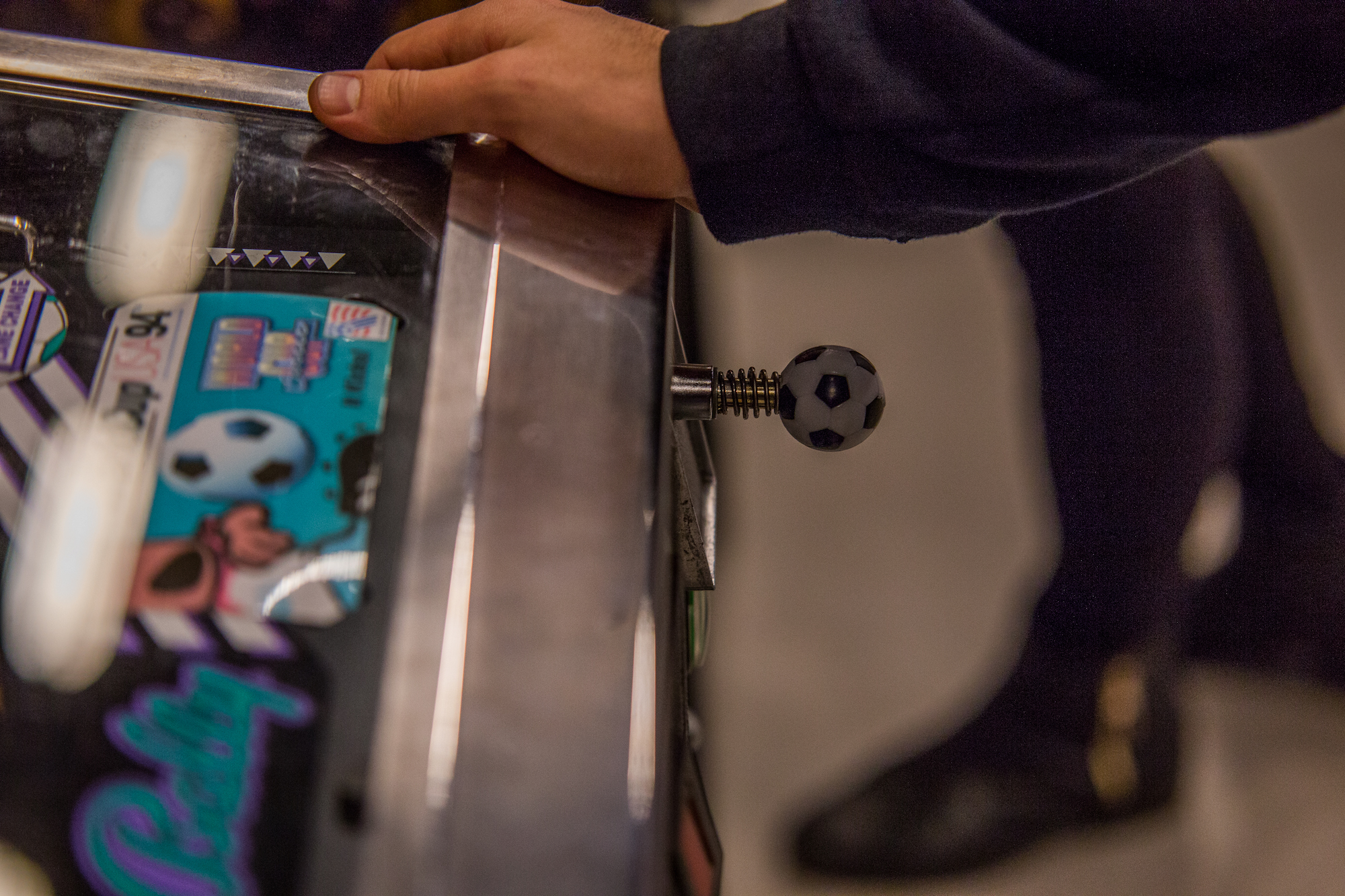 1940: New York City. Pinball machines were a largely mob-controlled business, and the press-hungry, bulldog-looking Mayor Fiorello La Guardia was sick of them. In an effort to combat what he saw as “mechanical pick-pockets,” La Guardia conducted prohibition-style raids on arcades and bars across the city. The ‘gambling machines’, as he saw them, were rounded up and smashed with sledgehammers, then dumped into the rivers. Major cities across the US followed suit, and in many places pinball became a criminal activity. Yet, despite its struggle, pinball lived on. Major companies continued to produce tables and distribute them to regions where the game had not been banned. In places like New York, pinball machines were imported on the sly, sitting in the back rooms of seedy porn shops and gambling dens.

To say the crowd is diverse would be misleading, but it is certainly a diverse group of middle-aged white men. 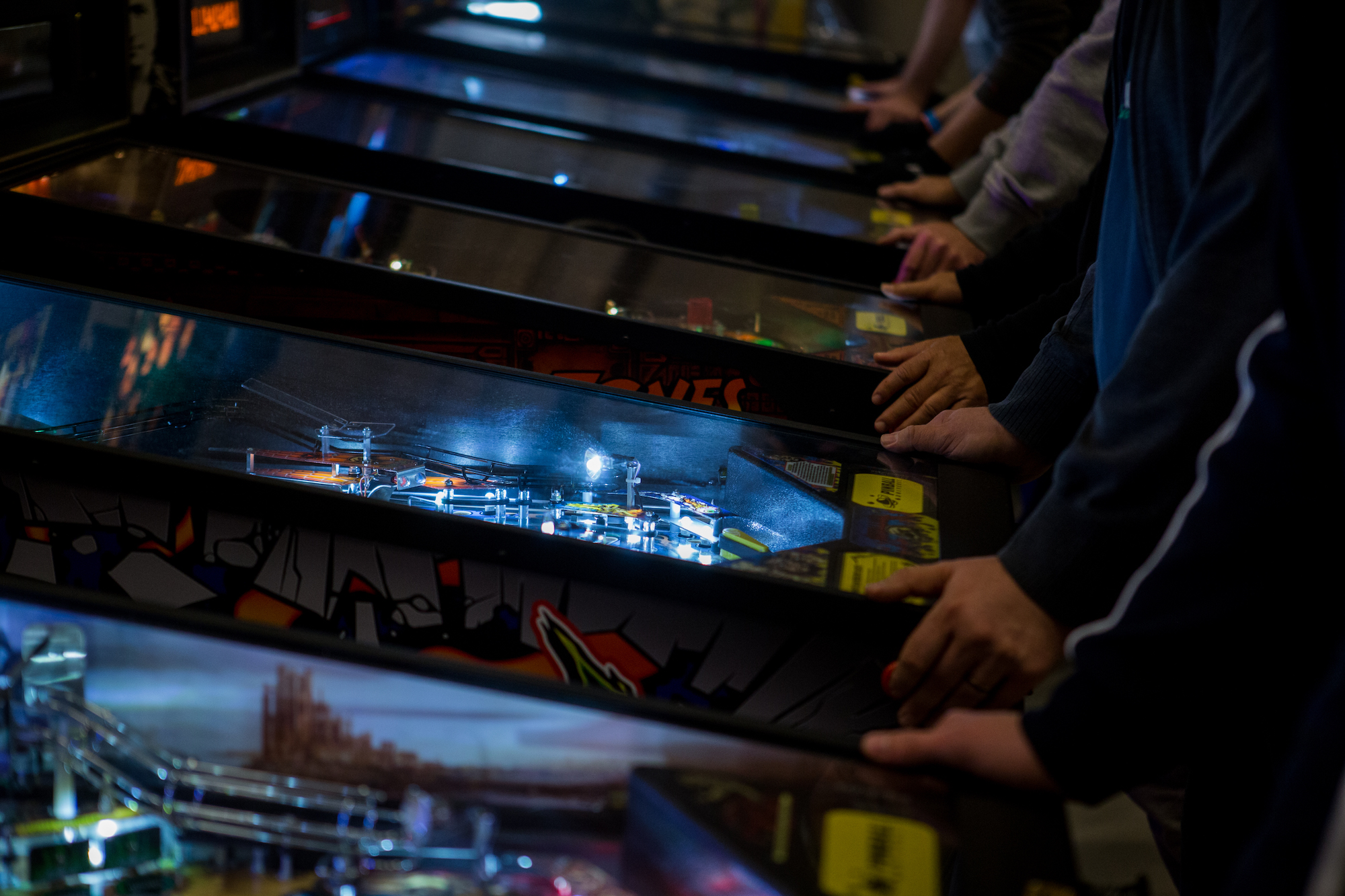 That was true until May 1976, when a young pinball fanatic named Roger Sharpe was brought to a Manhattan courtroom to play in front of the New York City Council. He was a good player, even rumoured to be the best. A writer for GQ and The New York Times, Sharpe gave an eloquent and logical explanation to the City Council about how pinball had evolved into a game of skill. To prove this he began to play ‘Eldorado’, one of two tables brought to court that day. The Council, keen to see a demonstration of such skill, requested that Sharpe play on the table that had been brought along as a backup. He was much less familiar with the second table, ‘Bank Shot’, having trained for his day in court on ‘Eldorado’. However, he stepped up to the second table and announced that the ball would pass through the middle lane of the playing field. Sharpe pulled back the metal plunger, launched the ball into play and sent it through the desired lane. He had called his shot, and the Council formally recognised pinball as a game of skill. Today, Sharpe looks like a typical dad. His formerly wild mustache has been trimmed, he’s neatly dressed, and wears glasses. At pinball conventions, however, he’s a living legend – known as the man whose bold demonstration of skill saved pinball.

Following the City Council’s ruling, the machines became legal, and across the country pinball experienced a renaissance. At this point, pinball’s history starts to get pretty nerdy. Machines changed from electro-mechanical to solid-state, dot-matrixes were introduced, etc. To sum up: it was the 1980s. America’s arcades were packed. Capitalism and haircuts were out of control, and kids had coins to burn. Video games were already starting to encroach on the pinball market, which only fuelled the fire for pinball designers, who were trying to keep the game (and their jobs) alive. During the mid-1990s – like poets on their deathbeds racing to finish their magnum opuses – major pinball companies such as Williams and Bally produced the most technologically advanced and entertaining pinball machines ever made, but neither ‘Addams Family’ nor ‘Twilight Zone’ could stop the bubble from bursting. All of the companies, with one exception, eventually shut down or used their factories to produce a much more profitable coin-operated contraption: the slot machine.

Neither ‘Addams Family’ or ‘Twilight Zone’ could stop the bubble from bursting.

But pinball didn’t just lay down and die. Instead, it was martyred, and from the ashes of a once-thriving industry rose a new form of competitive play. Obsessive fans and barflies began putting their skills to the test as an official global ranking system, the International Flipper Pinball Association, emerged. Today, whether for amusement or for glory, players flock to pinball competitions all over the world. This brings us to Potsdam in 2017 for the 20th German Pinball Open. 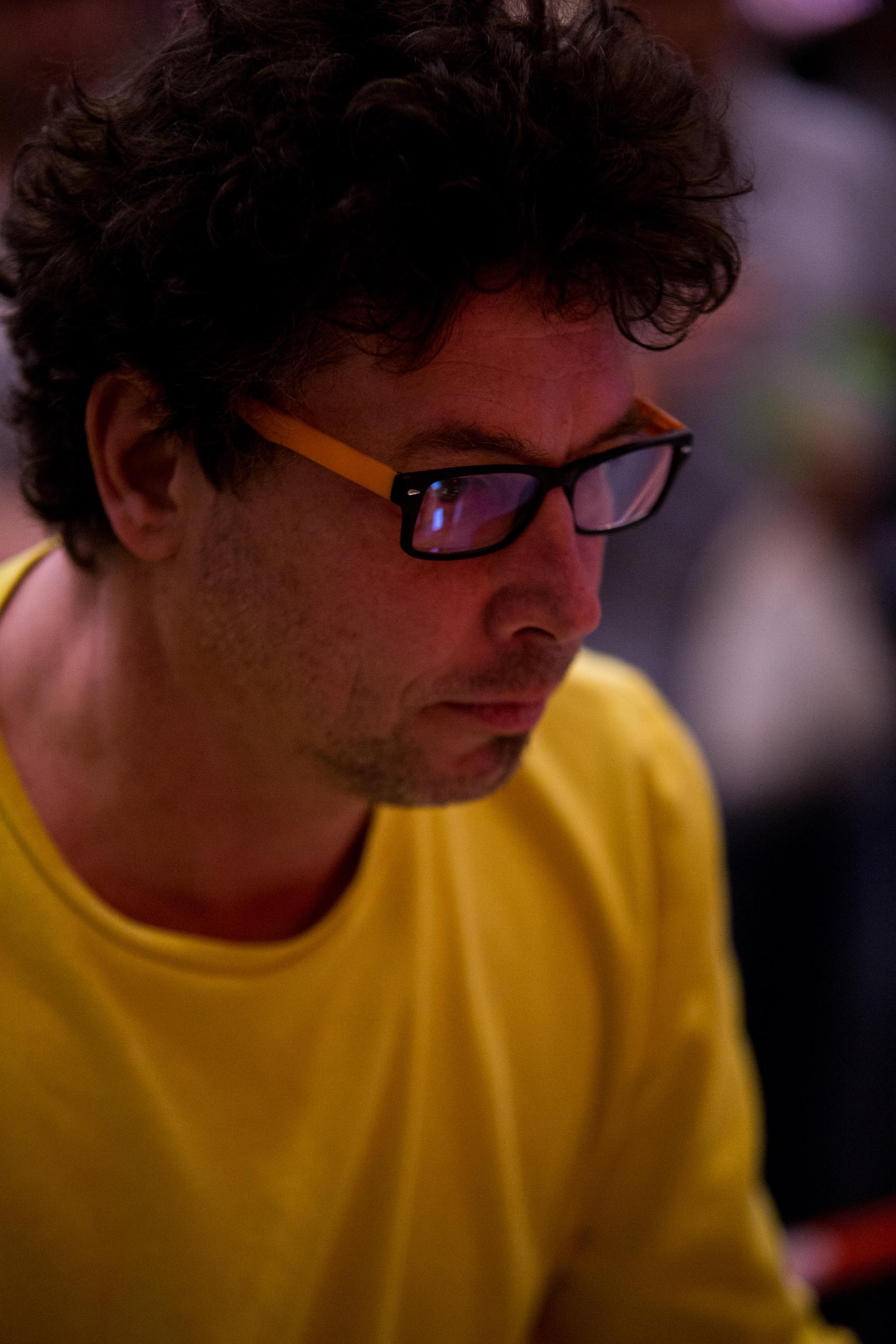 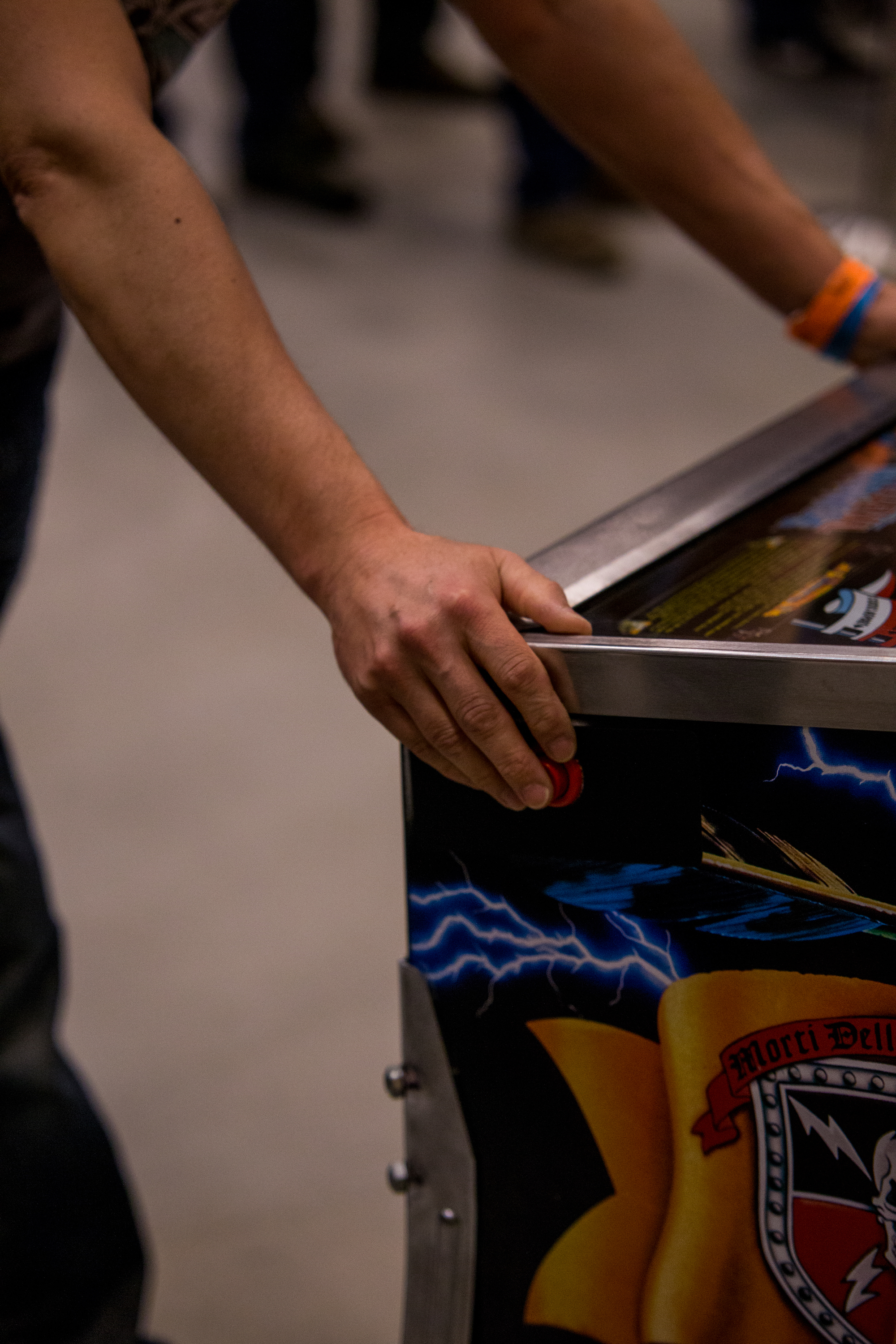 Pinball by nature requires a stretch of the imagination. In ‘White Water’, the ball represents rafters heading through turbulent rapids as it descends a bumpy ramp. In ‘Banzai Run’, the player is a dirt biker ascending a treacherous mountain trail. Many of the games are wonderfully kitsch; they revel in their artificiality. So it makes perfect sense that this year’s German Pinball Open would take place in the Babelsberg Film Park, just down the road from the tryhard Quentin-Tarantino-Straße, in a building next to a giant mountain fabricated for a film set.

Inside Metropolis Halle, lined up back-to-back in neat rows, stand more than 160 pinball tables. Their dates of manufacture span half a century, with the newest tables not even available to purchase yet. Some of the best machines in the hall come from that golden period, before neon-clad kids started begging their parents for Super Nintendos instead of arcade money. Many of those tables were produced in runs of less than 2000. Playing a game on one of these machines is like finding a piece of treasure. 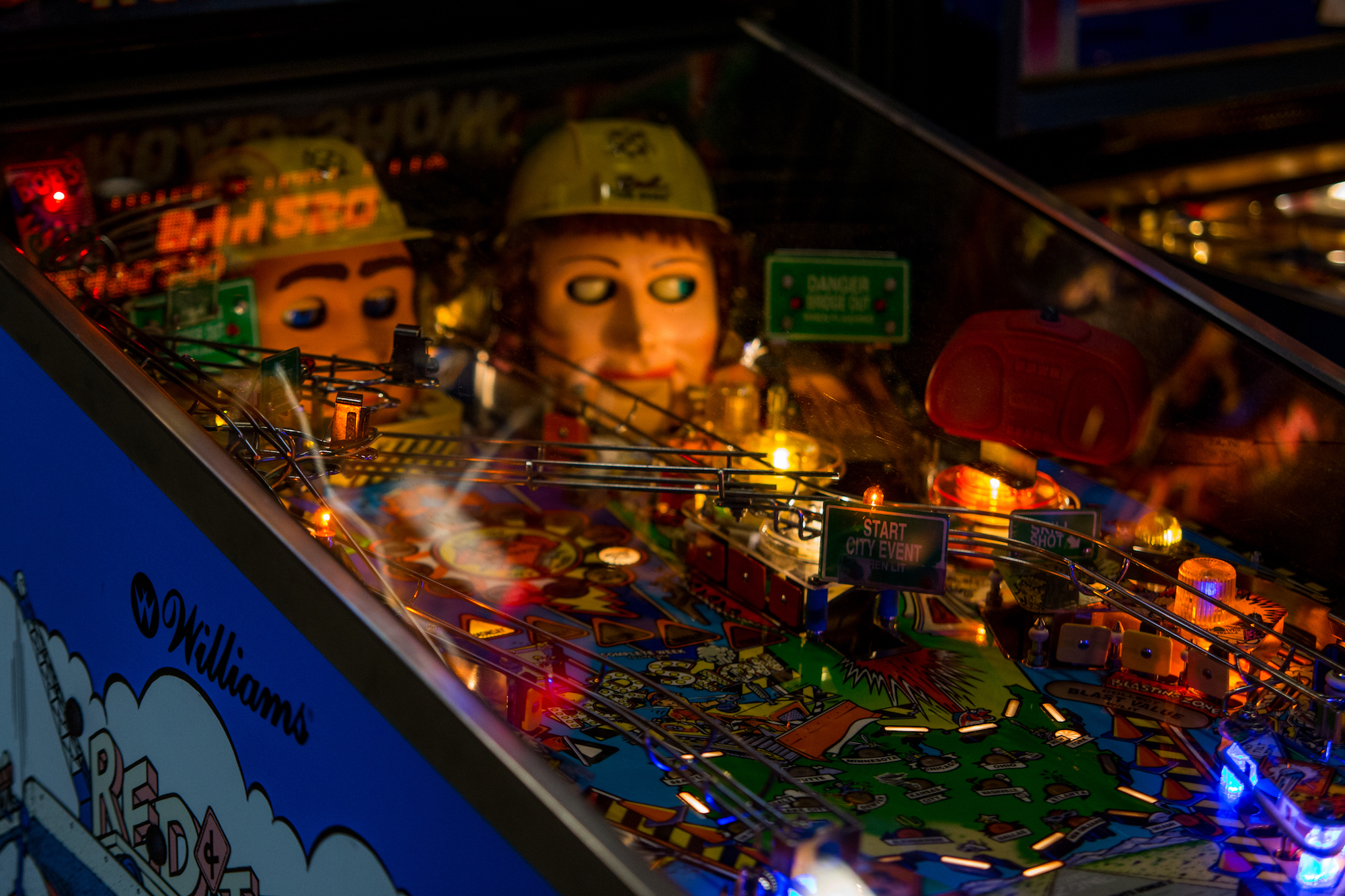 For the the crowd on opening day, however, it’s business as usual. Vendors selling replacement machine parts set up shop and begin jovially cutting deals with returning customers. Rivals vying for the same position on the podium taunt one another. Fanatics inspect the tables, arguing over the advantages and disadvantages of replacing bulbs with LEDs. There are punks with mohawks and pinball patches sewn into their jackets, nostalgic grandfathers who stick to the slow-paced machines of the ‘70s, and old friends who play sitting on bar stools they brought from home. Some of the serious players are already here, with fingerless gloves and headphones blasting EDM; they have the same tense, sobre manner as professional poker players, seemingly taking no enjoyment from the game. This day is mostly for freeplay, and many of the serious players stay at home, saving their strength for the serious competition.

To say the crowd is diverse would be misleading, but it is certainly a diverse group of middle-aged white men. In their heyday, pinball machines traditionally catered to a male audience, and the back glass of many machines sports the likeness of a voluptuous, scantily-clad woman. This is a sad, sexist truth about the game, but it has begun to change in recent years. As the day rolls on, a small but noticeable percentage of pinball-playing women turn up, turning more heads than even the highest scores.

Without any major competition on the first day, it seems the pinballers are in for nine or ten straight hours of uninterrupted pinball. That’s until the German Pinball Association guest of honour strolls into the hall: Gary Stern. In 1999, the already-merged Data East/Sega Pinball was about to go under, as so many American pinball manufacturers already had. In a courageous move as president of the company, Stern bought the assets, rallied an A-Team of unemployed pinball designers and founded Stern Pinball, Inc. The tables they produced may not always have been the greatest, but with keen marketing techniques and a steely resolve, Stern weathered the roughest years in pinball history as the owner of the last surviving company, which manufactures new tables to this day.

On the second day of the tournament, competitive play begins. A separate section of the hall is opened and competitors are assigned to tables in groups of four. While a massive amount of skill is required to become a pinball champion, there is also an element of luck. Some people are assigned to a table they know intimately, others step up to a table cold. As the day wears on, cries of “Scheiße!” can be heard across the room. Dreams are crushed, and competitors are slowly whittled down in number until only four remain. 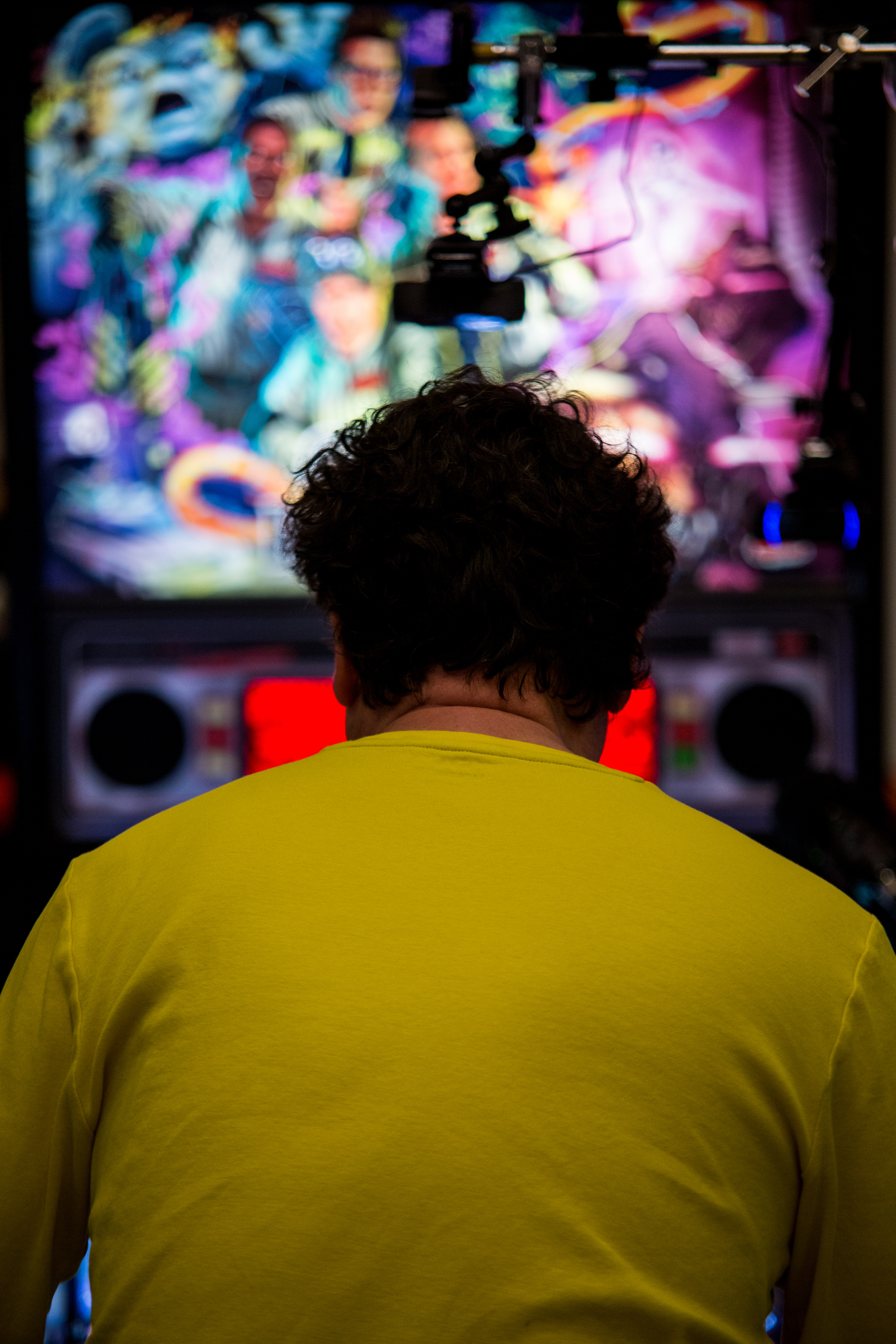 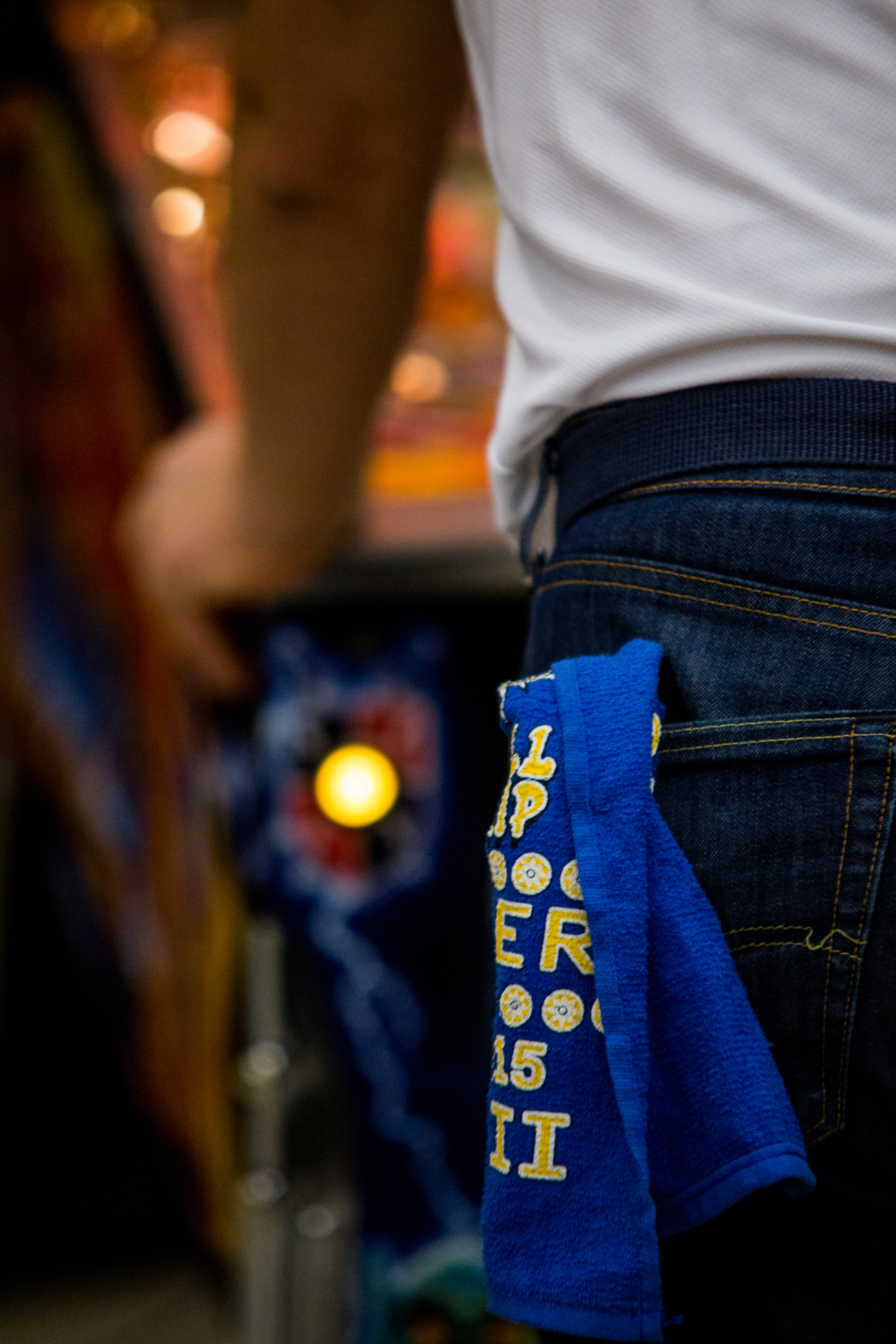 The showdown between the final four takes place on the third day. A surprise selection of three tables is presented, and the winner is chosen based on the culmination of their scores on all three machines. This year’s selection includes the Stern hit ‘Ghostbusters’, a table that has widely instilled faith in the pinball community by proving that new machines can be as good as the classics. The next is ‘Medieval Madness’ from the 1990s, regarded as one of the greatest tables ever made. The last to enter the championship is ‘Domino’s Pizza’. This table, like most fast food, is pretty disappointing.

Cries of “ooh” ripple through the group after each close call, and people break into applause breaks out after particularly nice shots.

The first of the finalists is Stefan Harold. He’s the oldest of the group but incredibly fast. He has the footwork of a featherweight boxer and his shoes dart back and forth under the table as he plays. Up next is young Roland Schwartz hailing from Austria. He keeps a Swedish Pinball Championship hand towel tucked in his back pocket, which he uses to methodically wipe down the table and his hands before every ball. Next comes Martin Hotze, who won the German Open in 2015 and is a favourite with the crowd. Last is Armin Kress. He’s young and in decent shape, and when his ball inevitably drains, Armin is the only player not to become visibly upset. He just smiles modestly, steps back from the table, and waits for his next turn. A crowd of around 30 gathers around the finalists as they progress from table to table. Cries of “ooh” ripple through the group after each close call, and applause breaks out after particularly nice shots. None of the players do too well on the ‘Domino’s Pizza’ table. 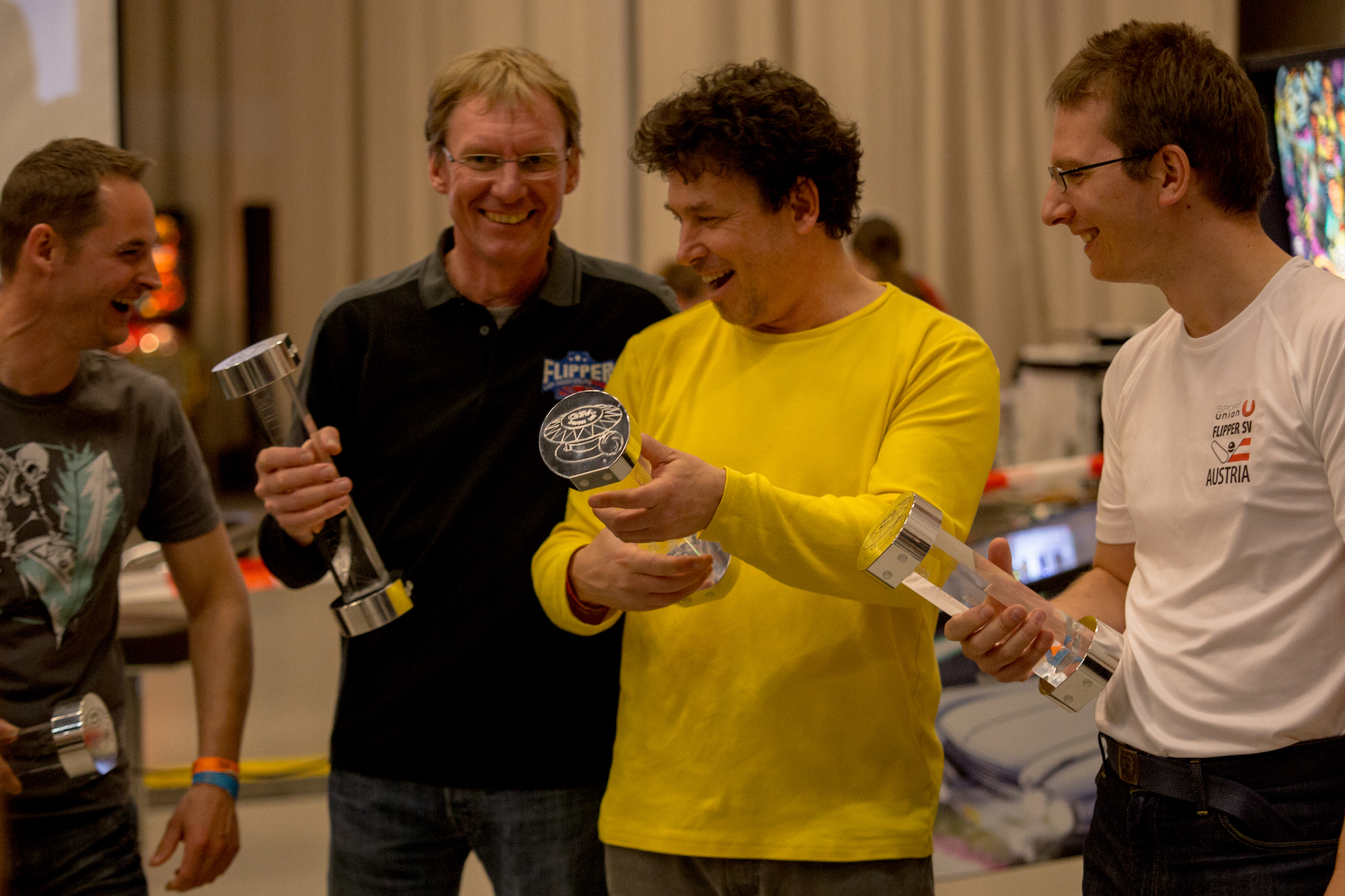 In the end, age and experience beat youthful enthusiasm, as the final game is between Harold and Hotze. The game comes down to the very last ball, but Hotze needs only a few flips to restate his position as German champion. Trophies are disseminated, awkward handshakes are exchanged and the crowd dissipates. The machines are carefully packed away by their owners and prepared for long journeys home. The crowd leaves the hall, many of them having played pinball for three consecutive days. The sun is bright, but it’s not flashing ‘EXTRA BALL’, so no one pays it much attention.

Reading about pinball is not nearly as fun as playing it. Gather your spare change and check out our picks of the top spots in Berlin for a beer ‘n’ ball. 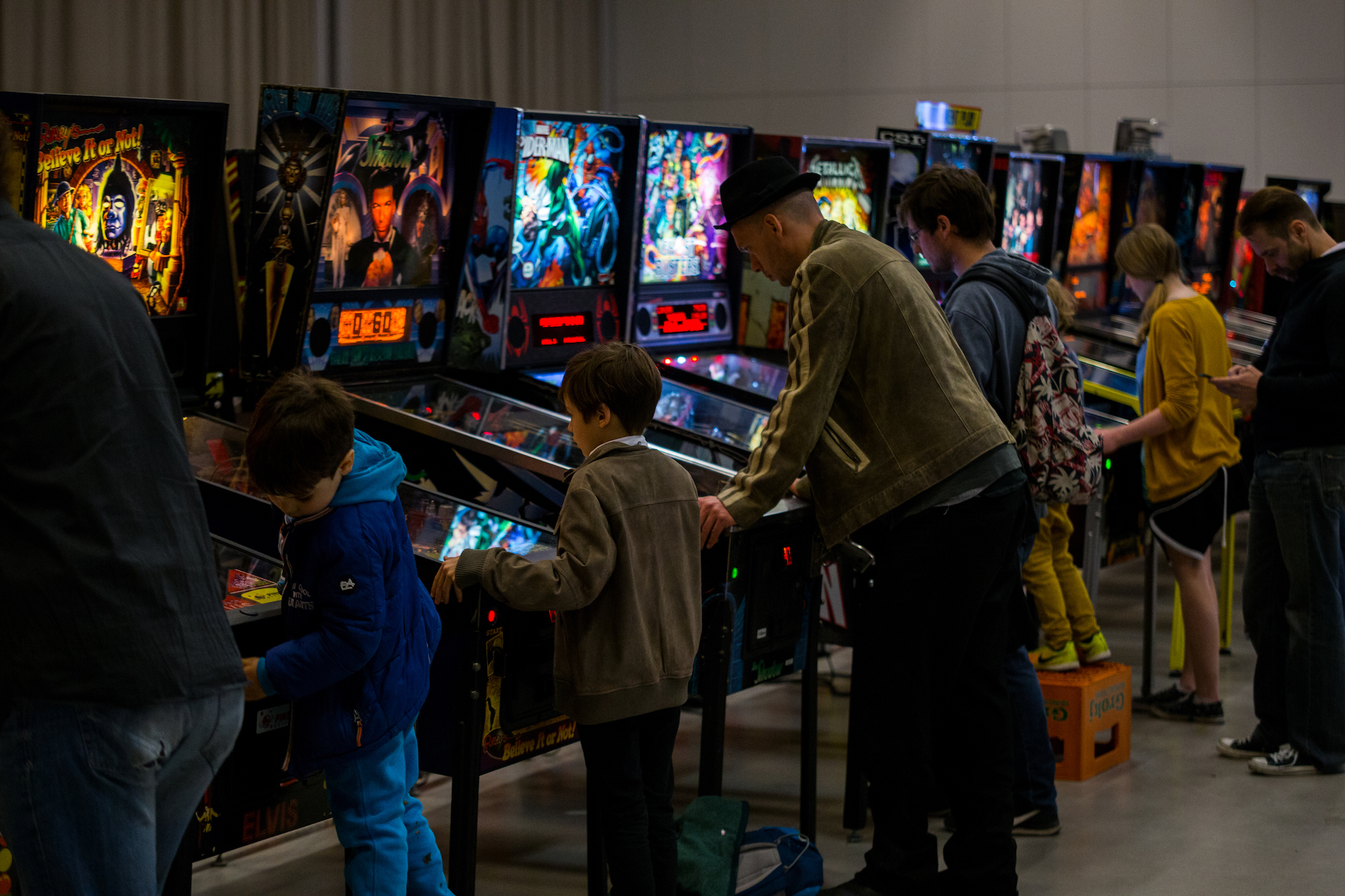