Exploring our Pen and Paper City

The Anger, Love and Desire of Notes of Berlin 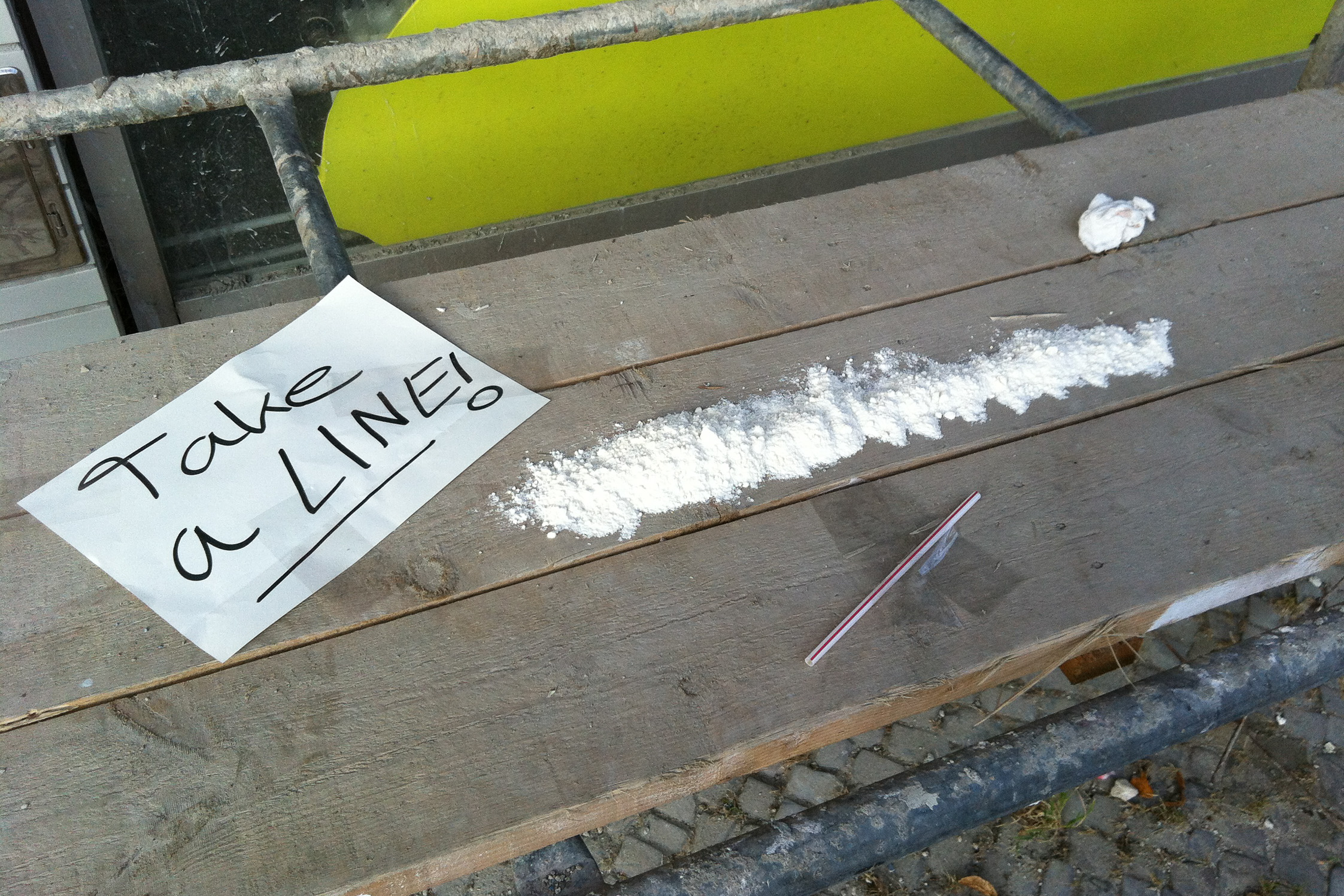 Whether fluttering in the breeze or streaked with running ink in the rain, Berlin’s handwritten posters, ads, announcements and notes are part of the fabric of the city – a sticky taped, pasted up, stapled staple of our urban landscape.

They are everywhere. But why is it that such a lo-fi means of communication continues to thrive in the digital age, and what does it tell us about the people we share our city with?

Joab Nist is in the seventh year of running Notes of Berlin, a website that seeks to answer these questions while archiving and paying homage to the expressions of frustration, anger, love, humour and desire left by Berliners on every available surface. What started as a blog has since become two books, a popular annual calendar, and Joab’s full-time job. We met with Joab to talk about the motivation behind the project and the fascination with public proclamations that keeps it going. 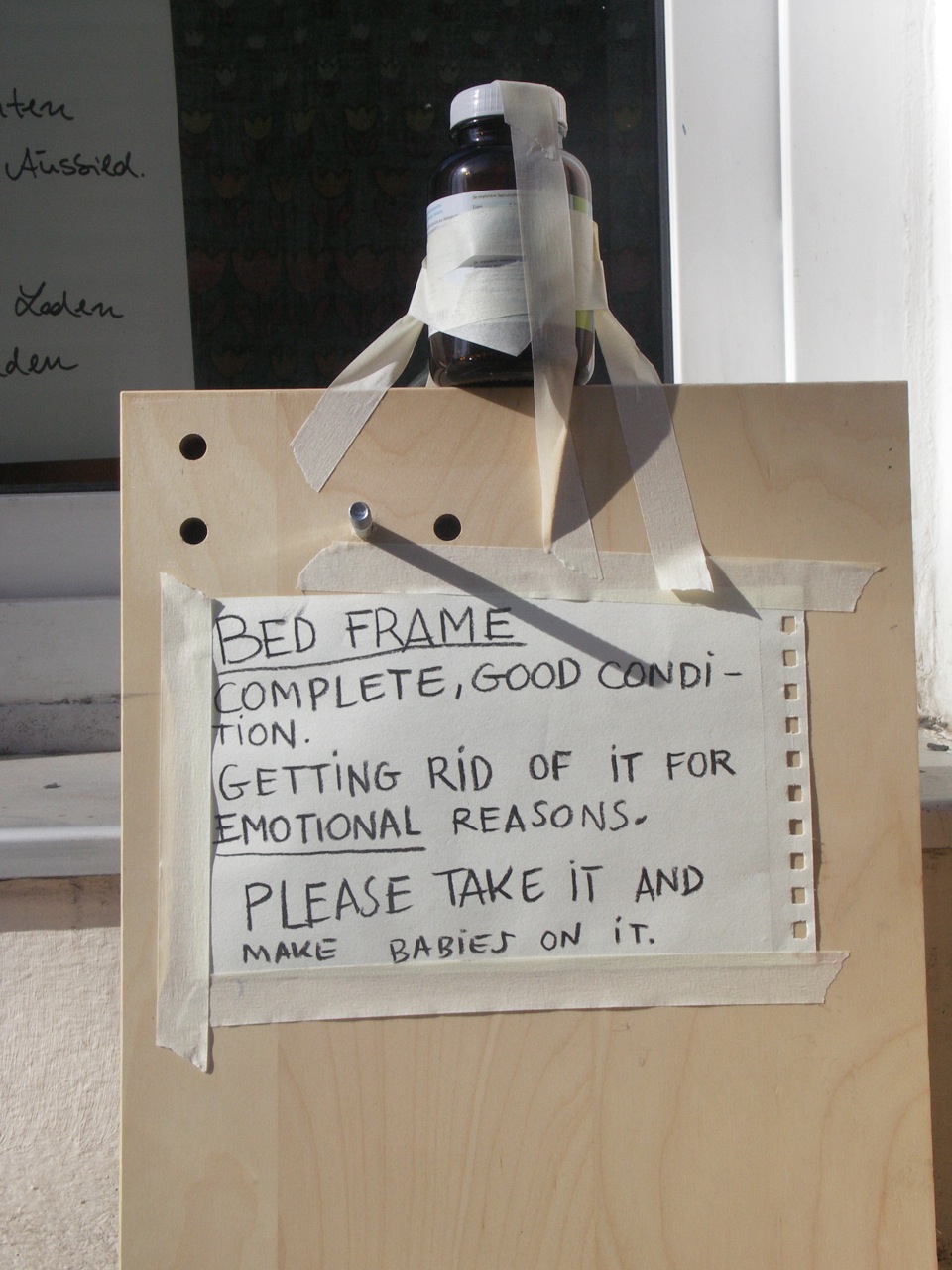 "PISS HERE ONE MORE TIME AND I'LL SHIT IN YOUR MOUTH!" 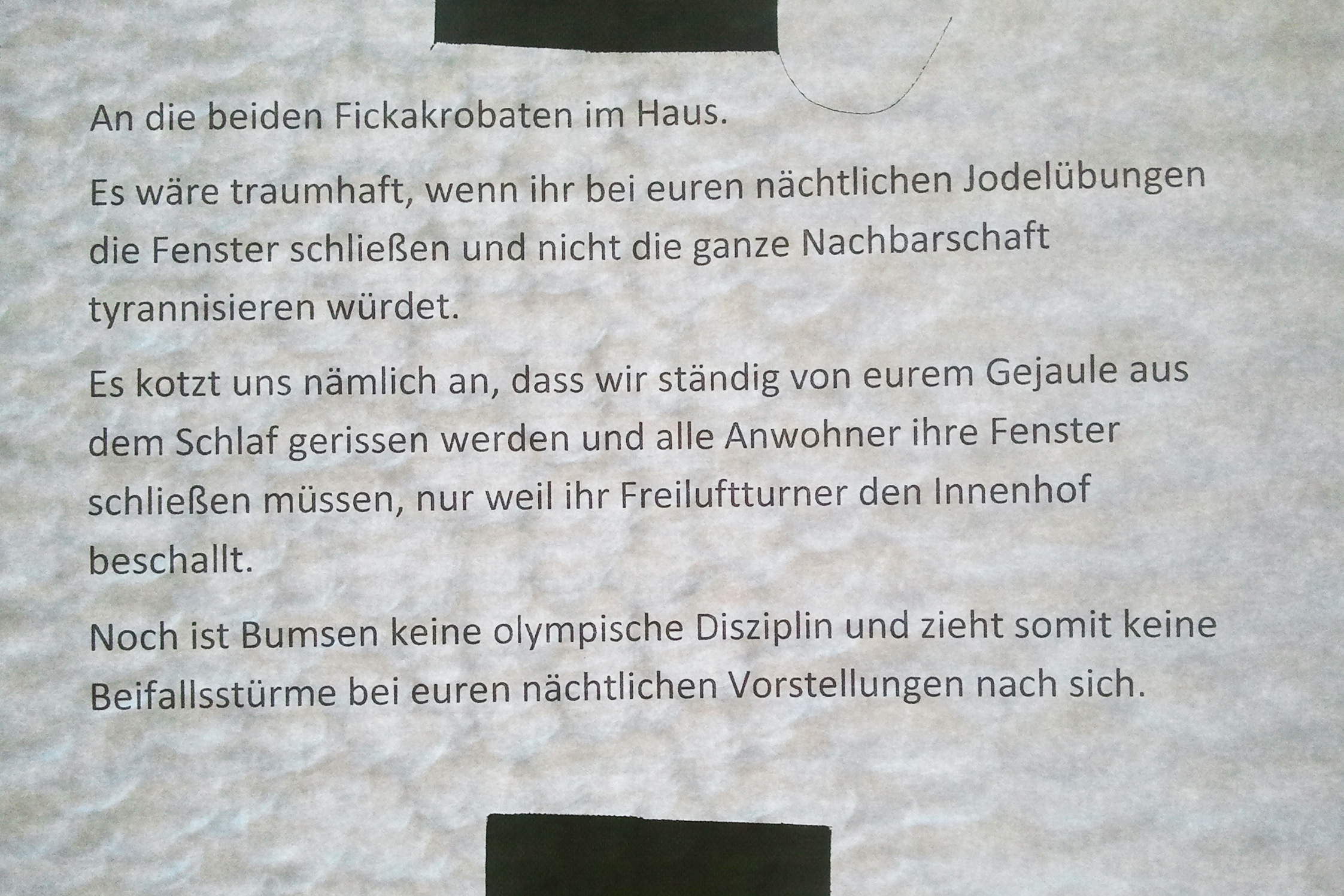 "To the two 'fucking-acrobats' in the building. It would be fantastic if you would close the window during your nightly yodelling practice and not tyrannise the entire neighbourhood. It makes us sick that we're constantly being ripped out of our sleep by your howling and all the residents have to close their windows, just because your 'open-air' tournament fills the whole courtyard. Screwing is not an Olympic discipline and your nightly presentations won't be greeted with thunderous applause."

What was the inspiration behind Notes of Berlin? I was always taking photos, especially in places I’d never been before. Not wanting to take pictures of the typical tourist sites – I was curious about discovering the residential and industrial areas. That’s something I did when I came to Berlin as well. In the beginning I was very curious, as it was new. But the curiosity didn’t go away, so I often walked around and took pictures of anything that, for me, was typical of Berlin. The written notes all around the city were something I hadn’t seen anywhere else in that quantity. They became some sort of treasure for me. When you are new to Berlin, you want to discover how the people are here: what do they think about, what’s on their minds?

It could’ve been that a note was very creative, very angry, very political, romantic, maybe lonely – everything that came to mind when I was thinking about Berlin. What are people searching for? What are they complaining about? What have they lost? It gives an insight into everyday life in Berlin, but it’s not something that’s written in your tourist guide. It’s completely unfiltered. It’s the truth, and to some extent you can identify with a situation that may have happened.

So I tried to find as many notes as I could, but it’s not so much a matter of time as a matter of being at the right place at the right time. That’s when the idea came to document as many as possible, to really capture the character of the city; to style a project that everyone could contribute to by sending in the notes they see. 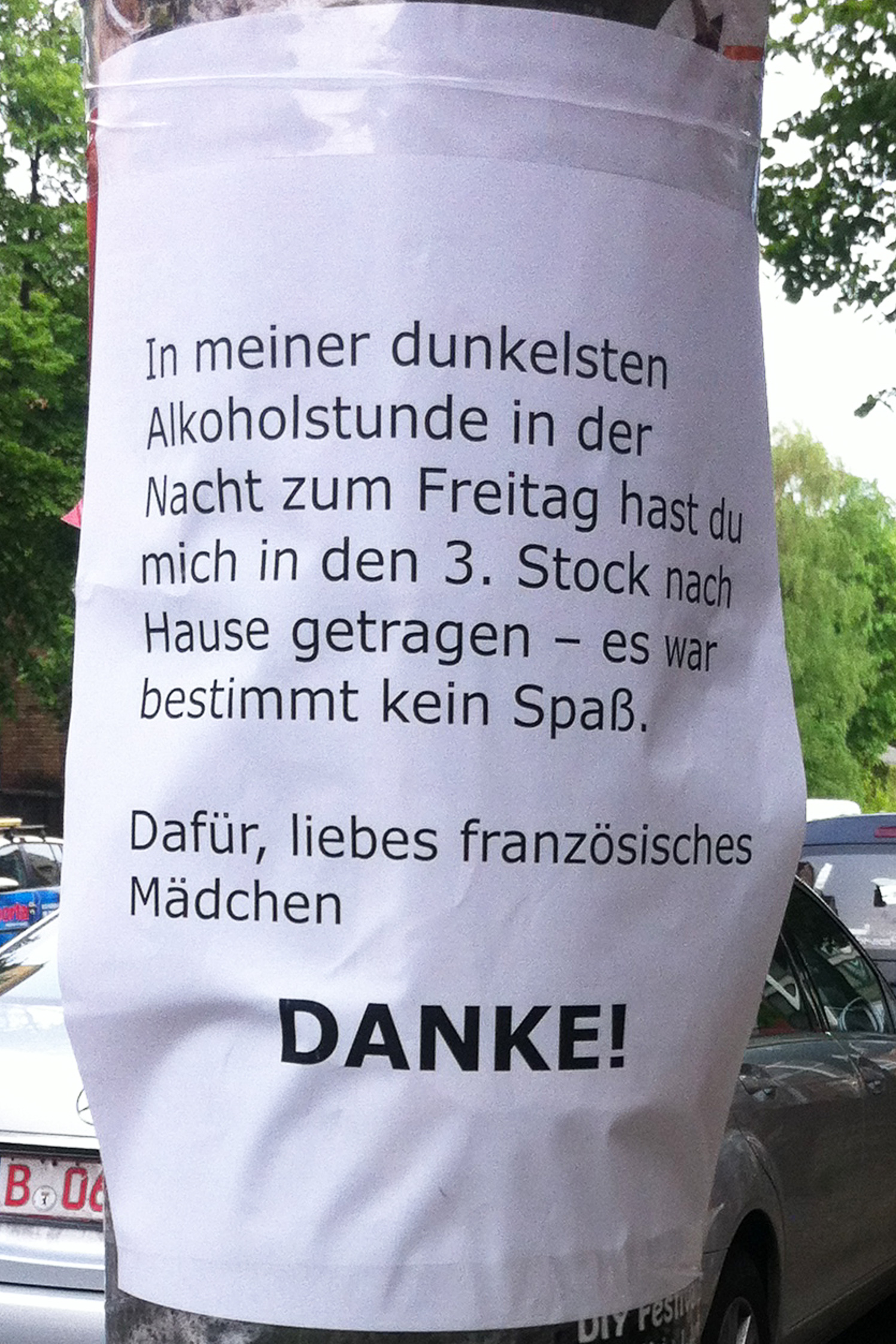 "In my darkest drunken hour of the night on Friday, you carried me home up to the third floor - that was definitely no fun. For that, lovely French girl, THANK YOU!" 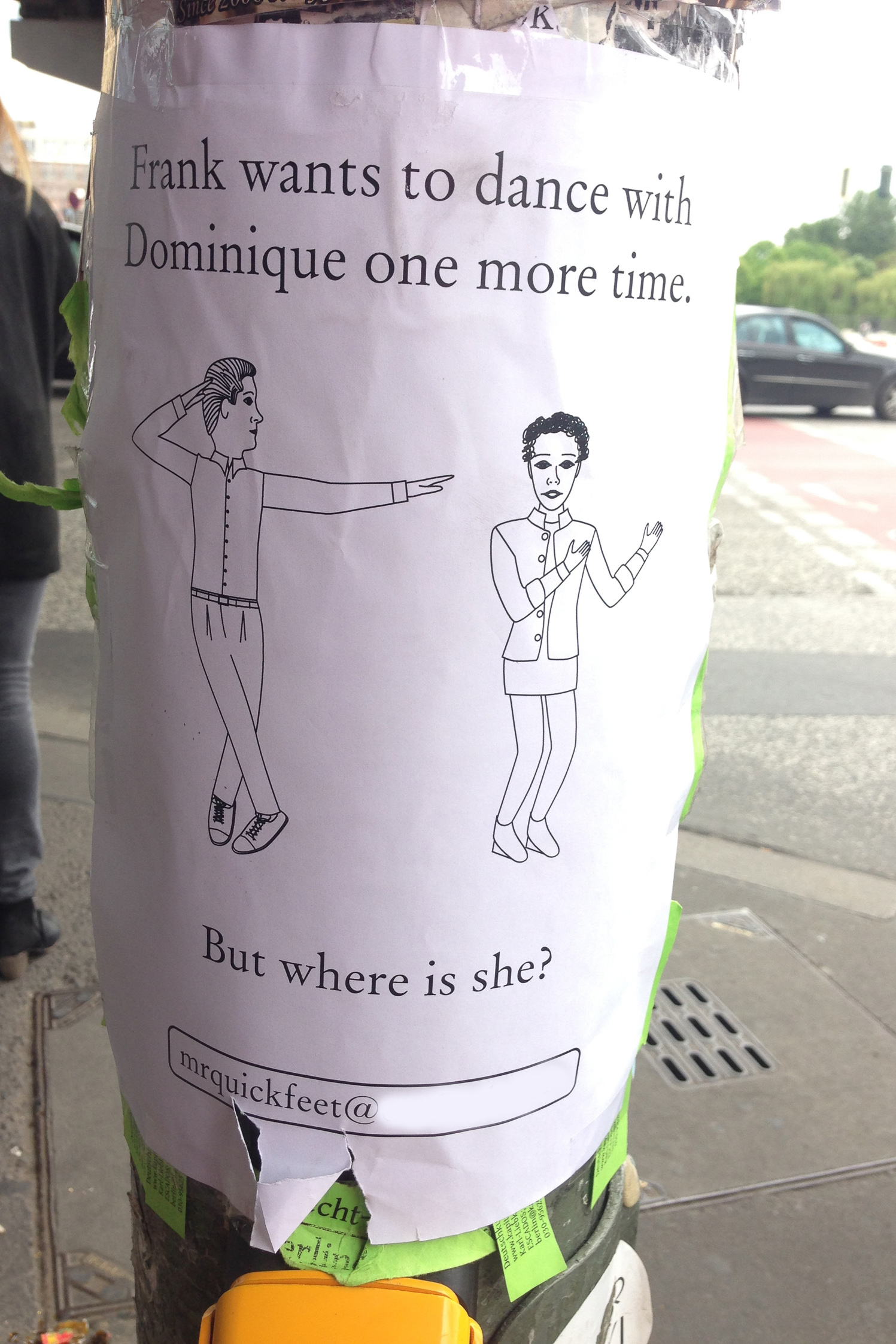 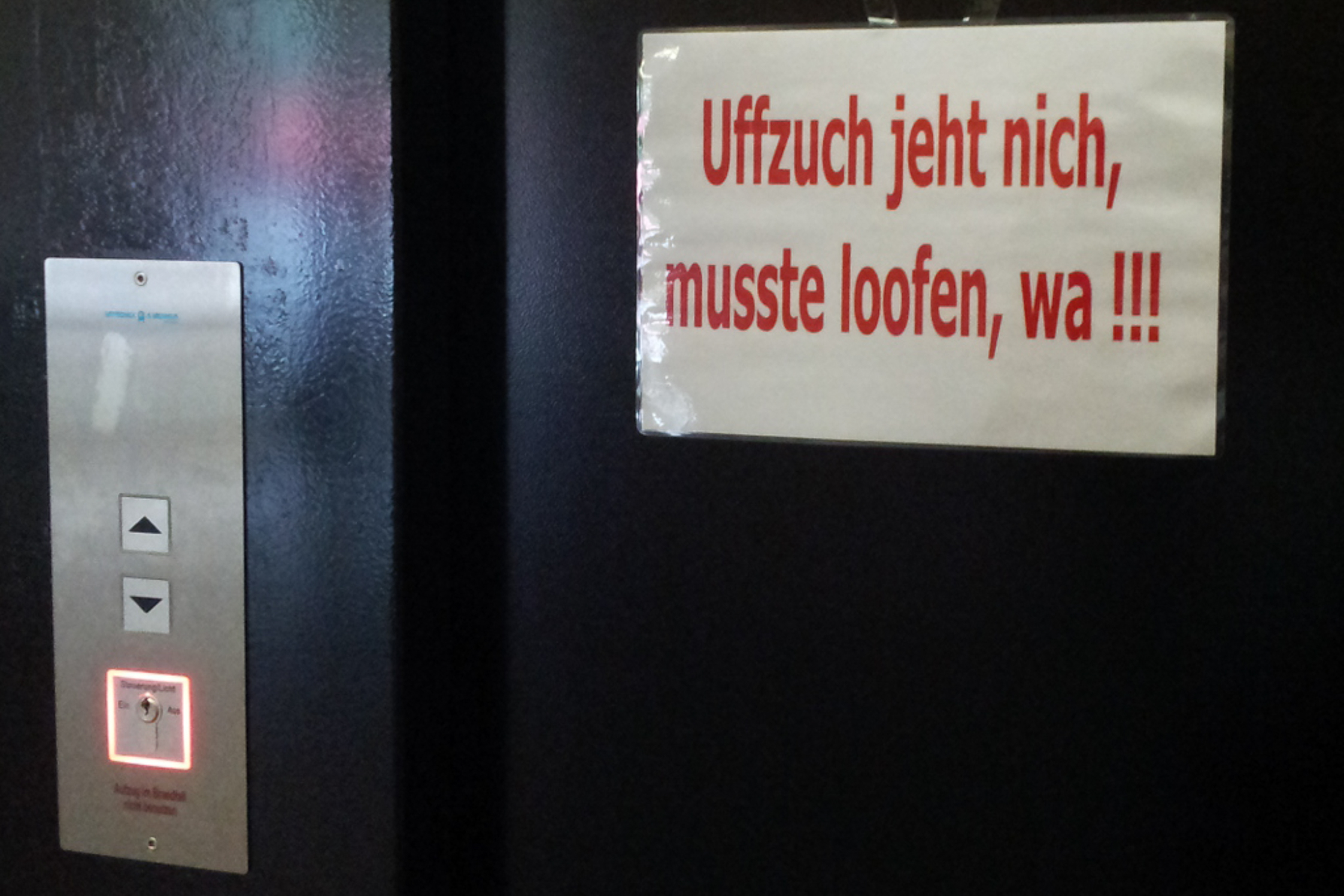 What is it about the notes that people find so compelling? It’s definitely not only one thing. The main thing I think is that a lot of the topics that you find in the notes are things that every one of us faces each day. Your neighbour is having loud sex; your mail is not getting delivered; someone throws garbage in front of your house; your bike gets stolen; you have a political opinion you want to express; you saw someone in the U-Bahn that you want to see again; you’re searching for a flat. If you live in a city, you experience all of these things to some extent, so it’s very easy to identify with the people who write these notes because it’s someone just like you and me.

Another reason people like to follow the notes is because they are from Berlin. It’s more interesting than it would be if they were from Frankfurt or Hamburg, for example. Also, if you were to go to Hamburg, Munich, Cologne or wherever, you wouldn’t find these kinds of notes. They’re not there. "Lost dog: on February 28th around 15:30pm, our dog boarded the M13 tram at Schönhauser Allee without me. Who saw this happen and can help us find him? He responds to the name 'Baader', has a chip and a heart condition, and hobbles on the right hind leg."

Why do you think this form of communication is so widely used in Berlin? It’s just normal for the people living in Berlin that you make use of this form of communication. It just fits somehow. I think it’s not surprising that people in Berlin like to express what they think. They started on the Berlin Wall, you have graffiti, street art, urban gardening, all movements where people are taking part in creating the cityscape.

I did a test four or five years ago in Munich. I stuck some creative notes around the subway stations and I saw people taking them down, without a reason, just because they thought they didn’t fit. But besides the cityscape, you need the people. You need a certain clash of cultures, of nationalities, to create the situations that result in the notes. Do you find common themes among the notes that you think are particularly ‘Berlin’ in nature? There are some notes that you can easily assign to some districts: things that children lose, or some really fucked up things that happen in Wedding, more international things that happen in Neukölln and Kreuzberg. But when it comes to the themes, there are main topics that you can identify in the notes: neighbours, sex, stealing, dirt, noise, love, the search for flats, bicycle theft, packages that don’t get delivered… "Optimist seeks 2-room flat for themselves ad their daughter, up to 400€ all included." 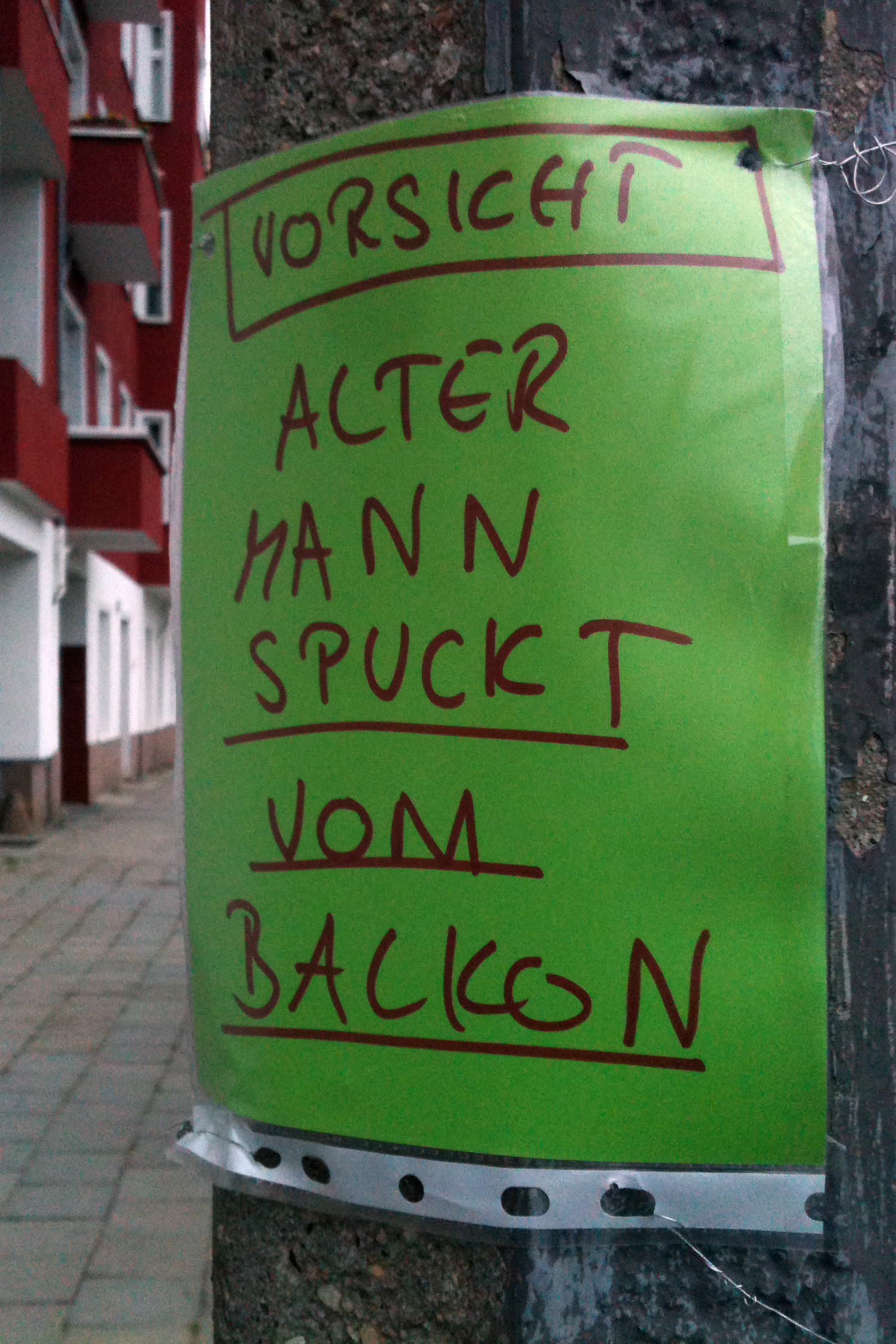 These things are so relatable. Do you think you could use the notes to create a profile of the typical Berliner? [Laughs] I was actually planning to do a little story based on real notes and how a day or a week in Berlin unfolds. So, you wake up because your neighbour is being noisy, you find your bike has been stolen, you lose your wallet on the way to the U-Bahn, where you see someone who you want to see again, you spend your day searching for a new apartment… it’s the everyday life of people living here.

What you’re capturing is such a deeply personal view of the city, and what it really means to live here. You just can’t make it up. And even if this form of communication is beginning to disappear, people have sent in 18,000, 19,000 notes over the last few years. It’s an archive that will never really go away. 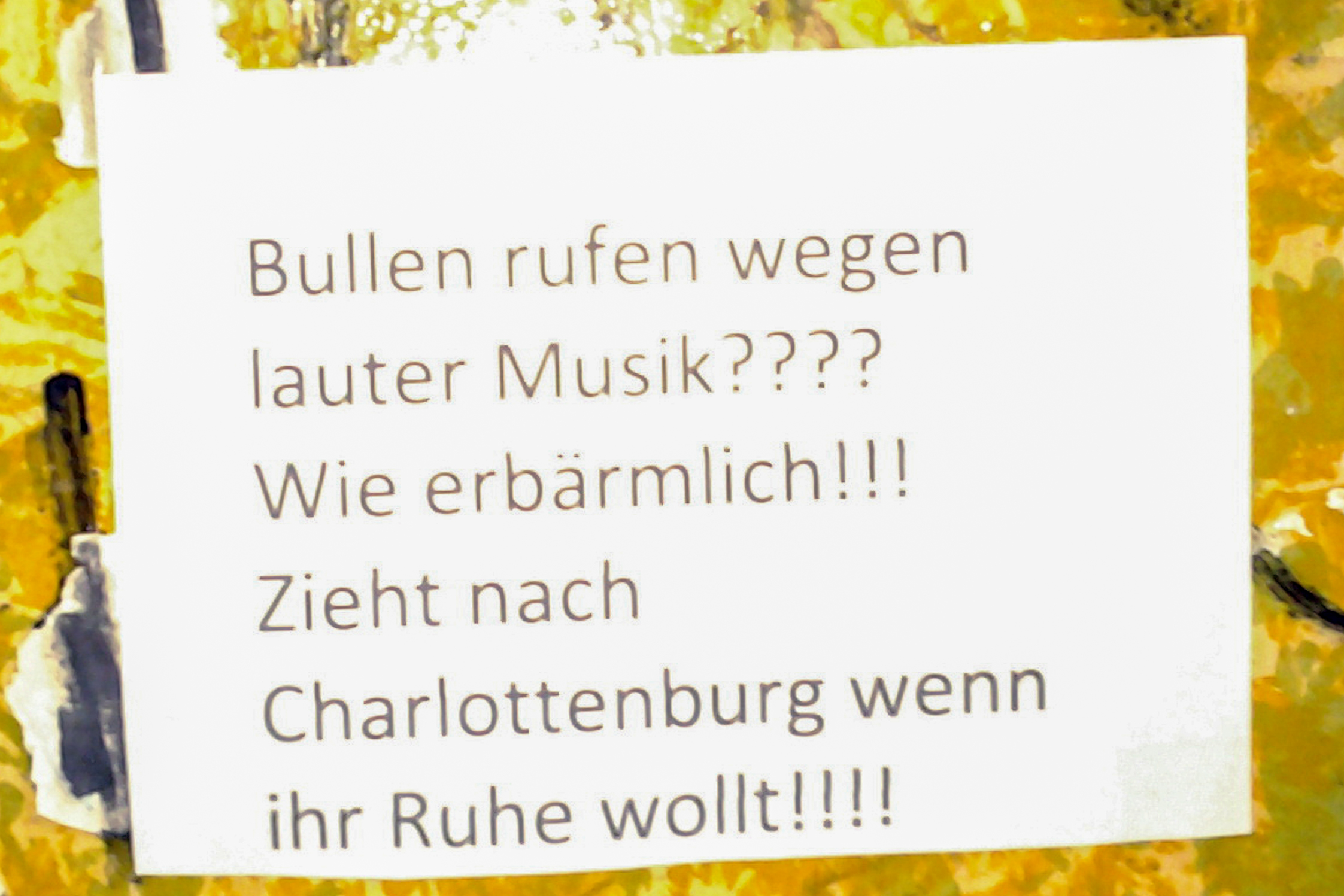 "Calling the cops because of loud music???? How pitiful!!! Move to Charlottenburg if you want quiet!!!!"

Do you write notes yourself? Yeah. I found my first apartment through writing a note. I wrote a note and stuck it around certain streets where I wanted to live, and two days later some artist called me and told me I could live in his apartment for the next year.

Also, some years ago I met a girl in a club. We walked to the tram station together but I didn’t ask for her number; maybe I was too shy [laughs]. So I wrote a note because I wanted to see her again. I knew where she lived because she told me where her tram station was, so I stuck 20 or 30 notes around the station and she called the next day.

You had an exhibition recently – a room in temporary art space THE HAUS – Berlin Art Bang. Tell us about that. Something I always wanted to do was to have a room completely covered with notes that I printed out. I covered the ceiling, the walls and the floor with the best of the last six years. I have done certain exhibitions but not such creative ones as this, and it’s a very nice feeling. I spent sometimes one or two hours in the room watching people – I don’t usually get to see my audience so it was a great motivation. It makes you happy to see that you are making people happy. I would like to continue more with the exhibition stuff, the material is there.

Apart from potentially more exhibitions, what’s next for you? I’m planning to do another photo book, but it will be made with quality paper and design in mind. Of course it’s way more expensive to produce that kind of book, so it won’t be an amazing commercial project, it will address a different audience.

Once you know about Notes of Berlin, it’s impossible not to notice them everywhere. Contribute your finds to the project at notesofberlin.com 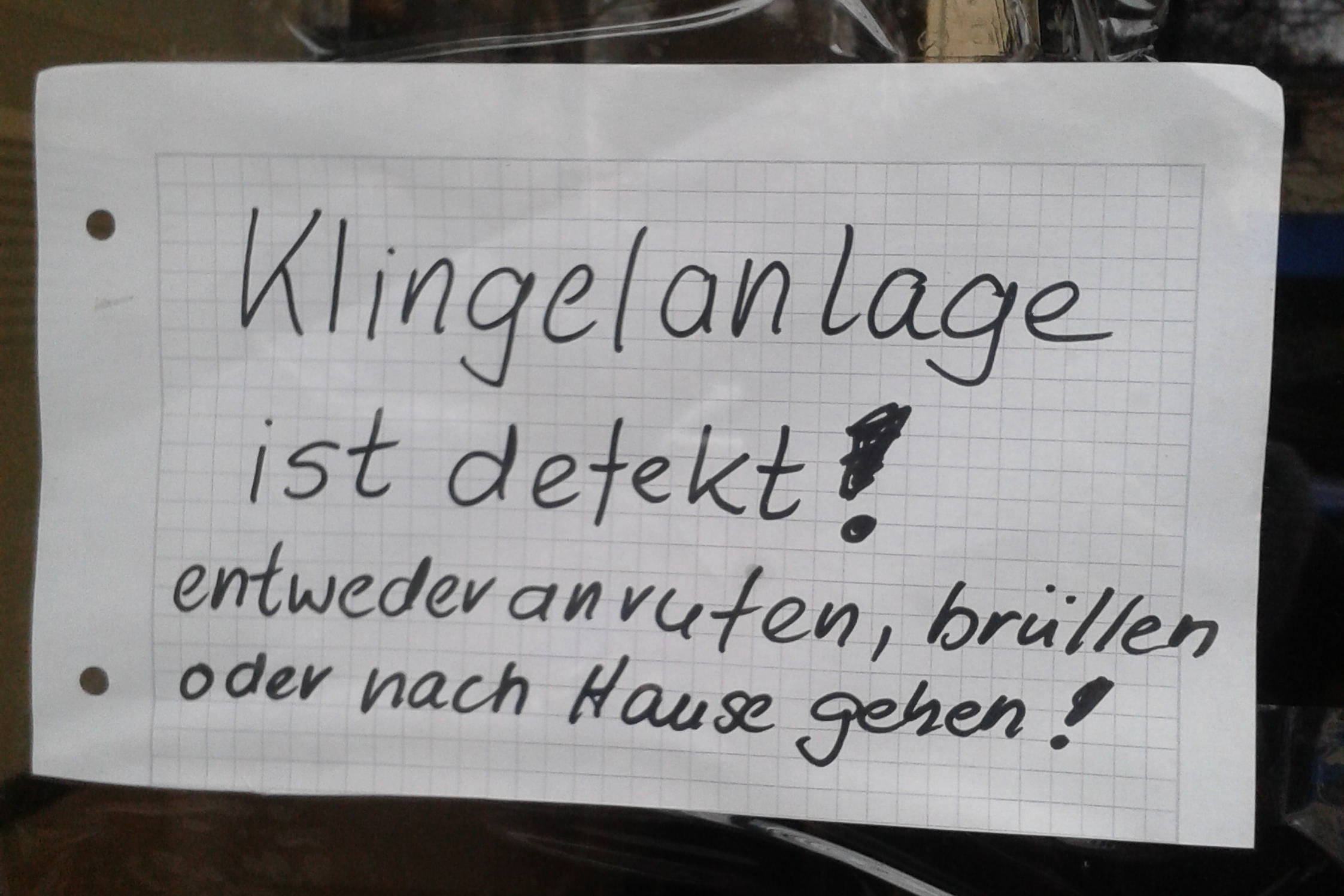 "Doorbell is defective! Either call, yell, or go home!"