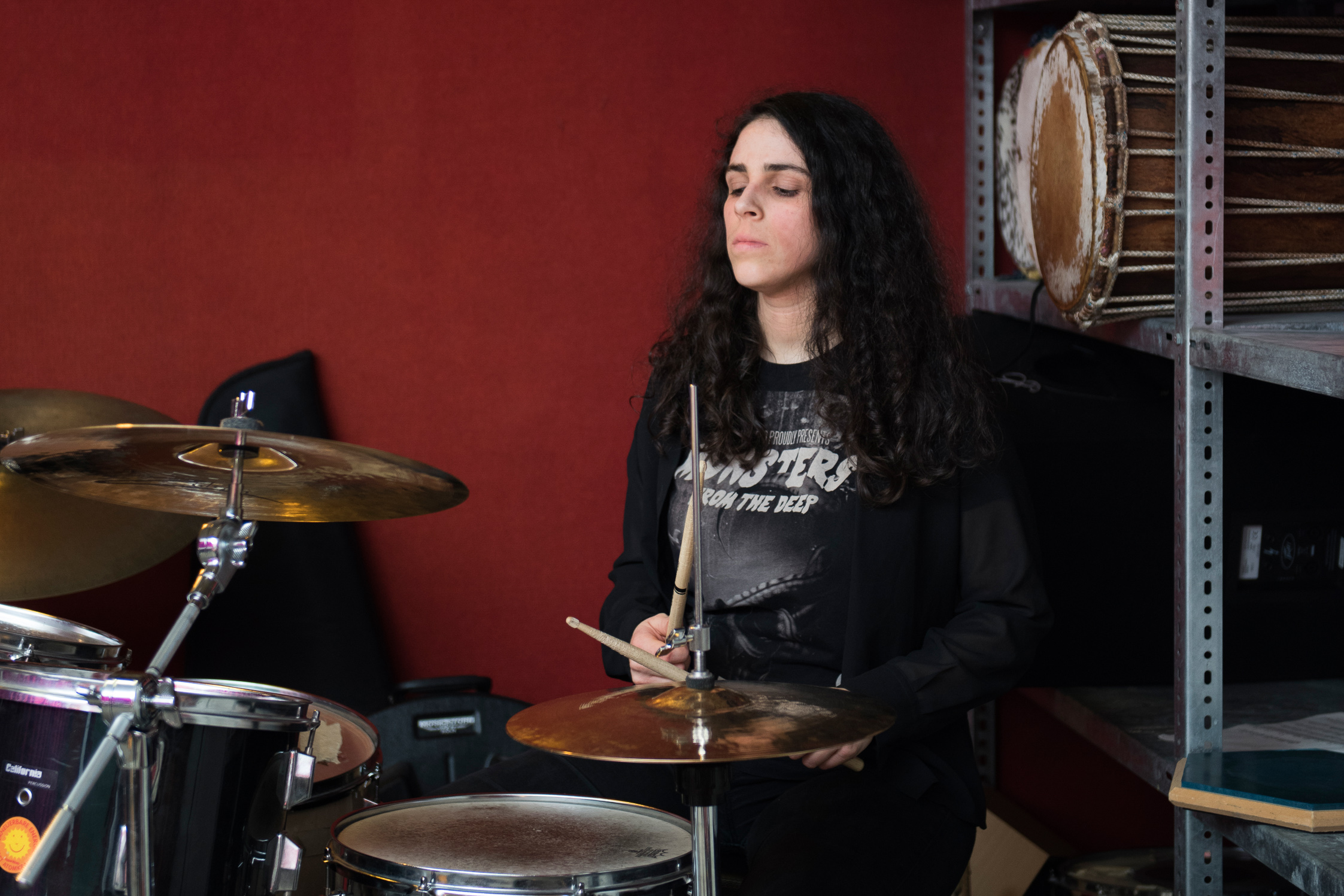 As a musician, drum teacher and film festival organiser, Philadelphia-born Sara Neidorf has been on a mission to improve Berlin’s cultural landscape for women and genderqueer individuals since she landed here in 2012. We meet in her drum studio, a black box tucked away behind a carpenter’s workshop on Sonnenallee.

We’re a little early, and as she coaches her student through Black Sabbath’s ‘Iron Man’, we notice how quiet, poised, and watchful Sara is – the kind of teacher who cares about more than mere instruction. She’s a mentor. The lesson finishes with Sara’s student telling us we should check out her band’s first show. Her confidence warms the heart and is precisely why Sara is so important in a scene where women often struggle to get ahead. 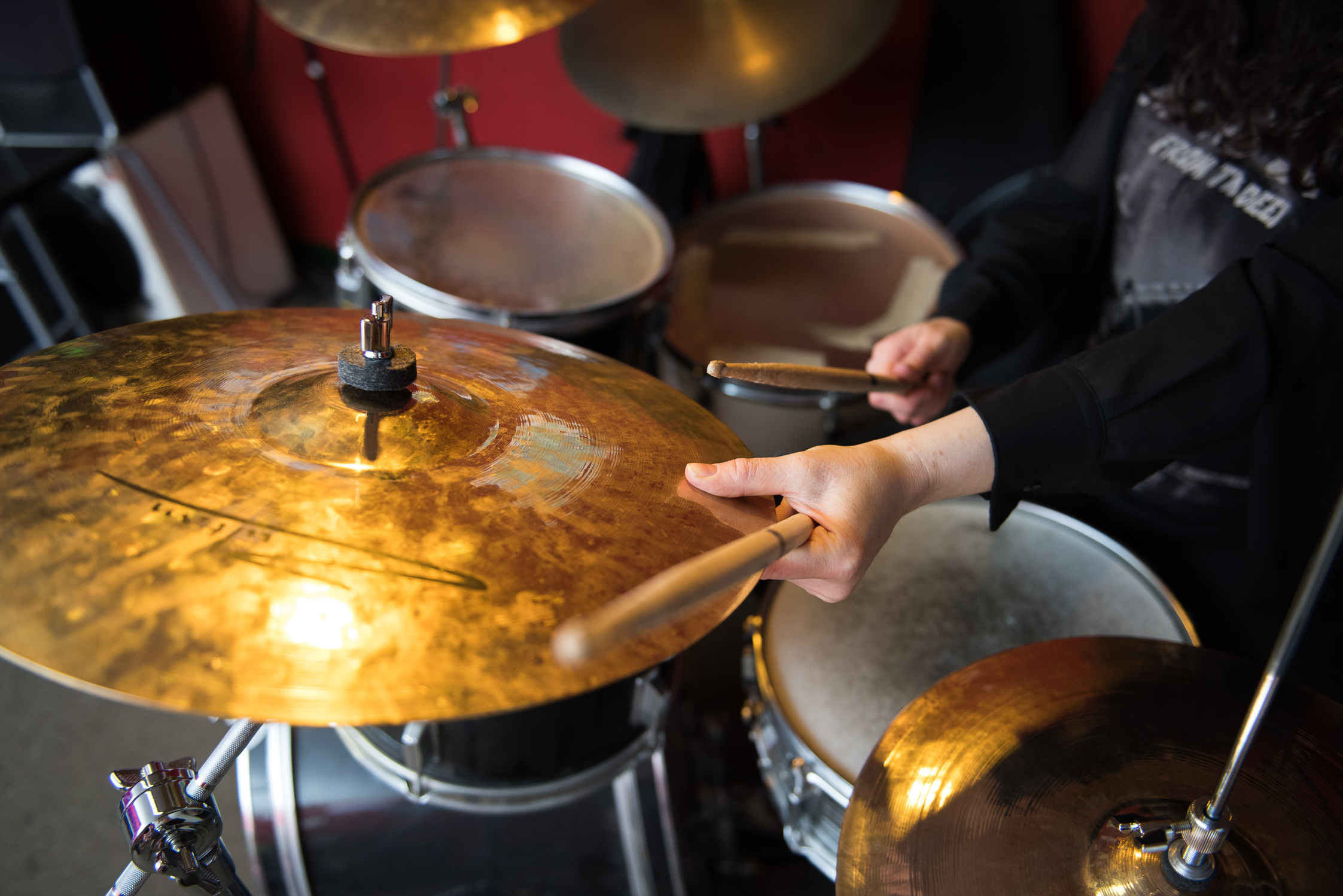 Was teaching drums part of the plan when you moved here? I’ve been teaching since I was 17. My school didn’t really have a music department; there was no drum set on campus. So I convinced the dean’s office to purchase one in exchange for me giving free drum lessons. Then I came here, and it’s really all I’ve done, steadily. Teaching drums is the job I know best and that I’ve done for the longest.

What do you think your students get from learning drums? With my younger students, I can definitely tell that they love being loud. It seems to be really liberating for them. They get their earphones and they’re like, [mouths screaming, mimes drumming]. That’s usually always the first five or ten minutes, just letting them get that out of their system without too much structure. After that, I encourage them to start simple things, and we keep going with that for as long as it’s fun. I think they have a lot of fun having the freedom to make unstructured noise, and just be kind of aggressive.

Support your friends who are trying to earn their living with music. [...] We all really thrive on validation.

And what do you get from teaching? I personally love the drums so much, so spending all day surrounded by them is a pleasure for me. I like knowing I can pass on that passion to someone else, because it’s such a satisfying way to express yourself; it’s non-verbal. We struggle with verbal communication all the time, so I think music is such a great escape from miscommunications and missteps. We’re all on the same page: we all just want to express something, to communicate with each other, and I think doing that on a musical level is really refreshing. So I hope I can pass that on; that ability to express yourself outside the verbal realm.

What would you like to see change for women in Berlin’s music scene? Is the future on your mind? Of course, of course it’s on my mind. My entire student base is female or genderqueer. That’s why I do the work I do. I want there to be more female musicians, I always want it to be better. I found a couple of really important role models when I was learning the drums as a teenager. Having them around was essential to feeling motivated, encouraged and welcome to learn as a drummer. I think it’s really important to have people in your community who inspire you, and who you can look to as somebody who knows their shit. At least for me it was. 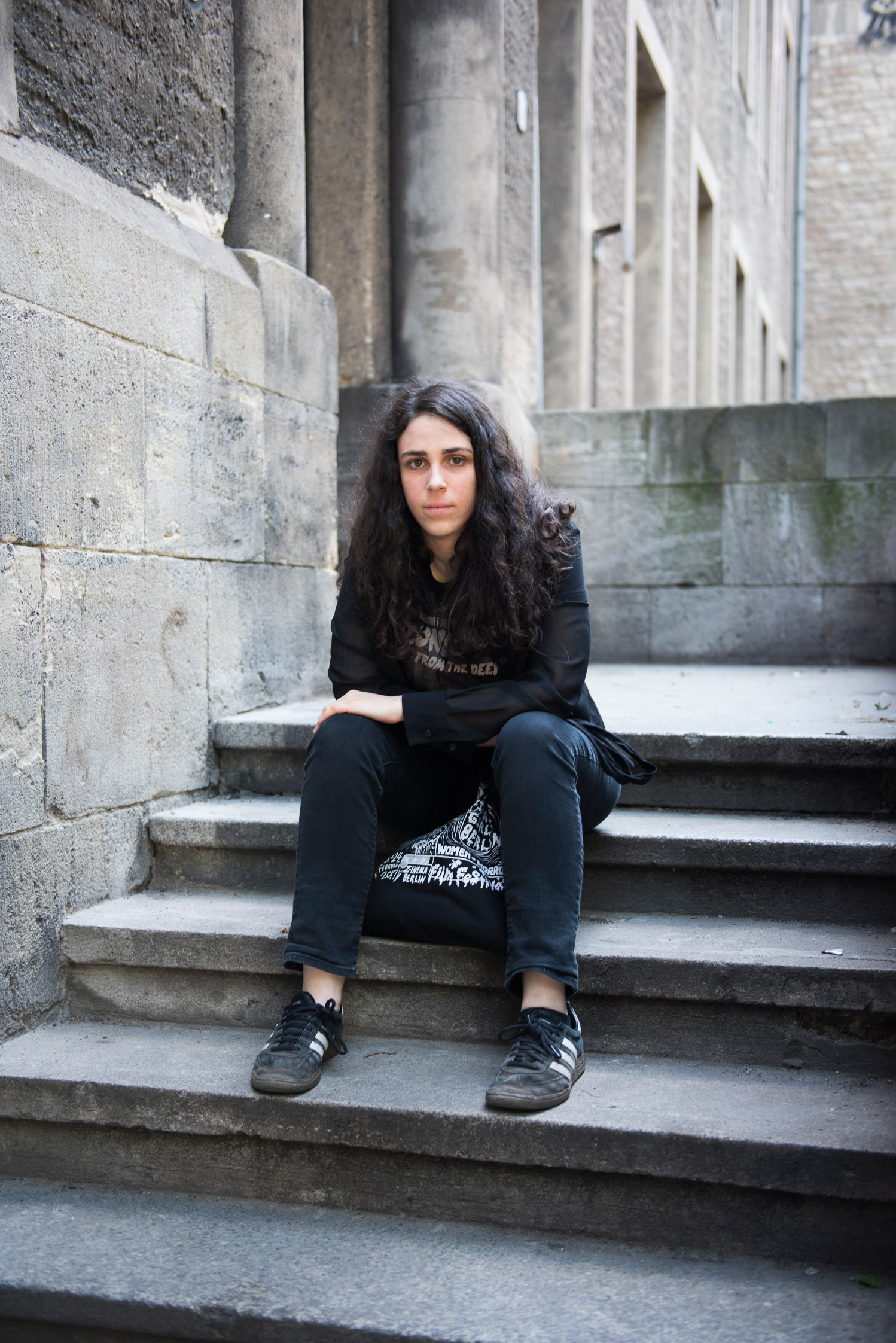 You seem really invested in Berlin’s musical landscape. How did you come to be here? I was here as an exchange student for a semester and I really fell in love, not just with Berlin, but with so many different things about the city. I found some people I connected with in the music scene, but my main thing was the underground cinema culture. I encountered the Queer Film Club, which I now help to run. And there were all these awesome film festivals, I was really impressed with them; how they had such a rebellious and odd spirit. I was inspired by that, and now I’m running one!

Yes! So, tell us about Final Girls Film Festival. It’s a festival dedicated to horror films made by women. We’re in our first year, but already on our second festival, because when we opened up our call for submissions for the first we received over 400. For the second festival, we have XX, which is a horror anthology with four female directors including Karyn Kusama, Roxanne Benjamin, Jovanka Vuckovic and St Vincent, which is pretty rad. We also have an art exhibition and a couple of talks. I’m going to give one with my mom about ‘horror hags’ – these huge Hollywood stars who fell from grace and in their older years couldn’t get any serious roles. They were just booked in B-horror movies, basically, and turned into a spectacle for being middle-aged – a horrific, ageing woman.

We struggle with verbal communication all the time, so I think music is such a great escape from miscommunications and missteps.

You’re also in a band, Choral Hearse. Yes, my doom metal band. Half of our songs I wrote as a teenager. I came up with a full album of material that I had written the guitar, drums and some bass parts for, and searched high and low for awesome female musicians in Berlin. I didn’t even have the intention to start a band with it, but then this friend had told the singer, Liaam, that I had some music and she was like, “Oh cool! I’ll be in a metal band.” We started as an acoustic duo: acoustic folk metal – that was fun! Eventually we expanded and now we’re a full band.

You’re a well-known face on the music scene, and visible as a champion of female musicianship… Wait until you see me play guitar with Choral Hearse. [Laughs] 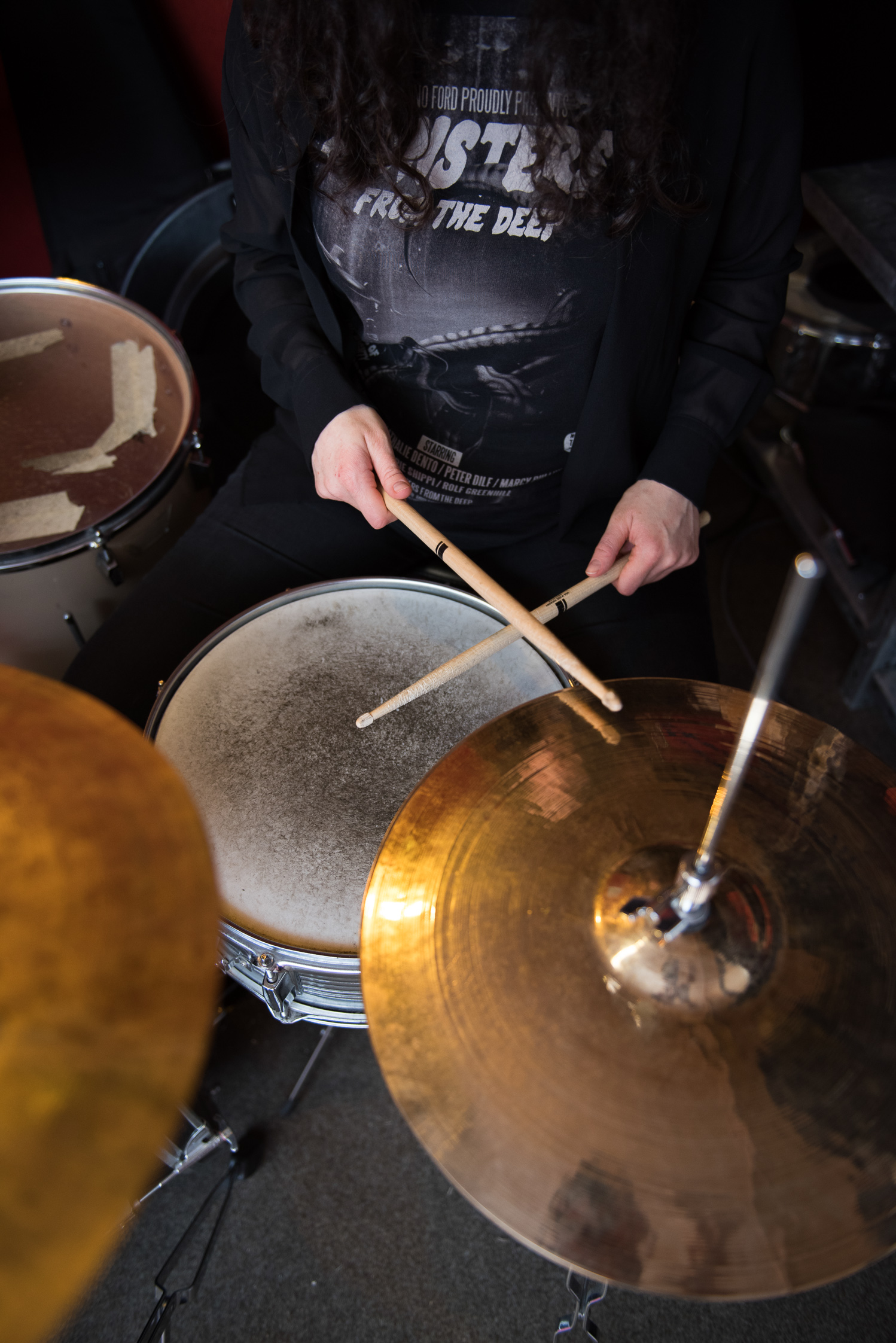 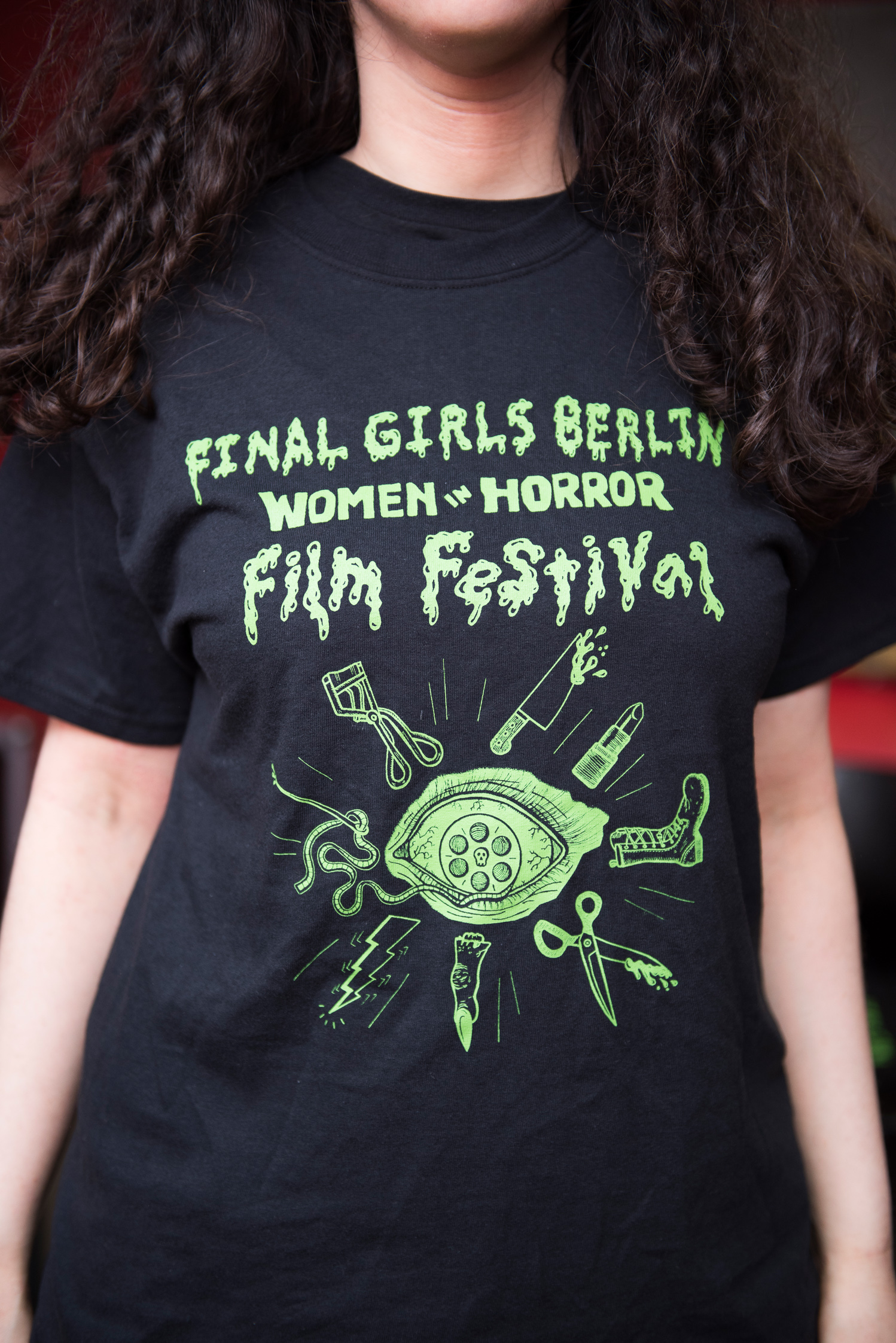 How much do your projects intersect with the queer and feminist scenes? The film festival more directly, you could say. The music, I mean, in terms of the content, not in any obvious way. But all four of us in Choral Hearse are queer. I don’t want to be a ‘female drummer’, just a drummer, but I’m okay with being a female drummer, I don’t get angry with being designated as such. It is, in many ways, also a shortcut for finding each other – if a band is playing I want to know if they have a female drummer, ‘cause I’ll go and see them.

It would be, of course, wonderful if every show that you went to had a female drummer in it. If it was three bands and definitely one had a female drummer, yeah, that would be ideal, but how many shows have you been to where all you see on stage is white men? Most of the shows I’ve ever been to.

What’s been your high point in music to date? My favourite thing is always practising the music. For me that’s the high point. Shows are great, but I get the true high when I’m just focusing on the music in the practice room.

What can we do to support female musicians in Berlin? Support your friends who are trying to earn their living with music. Keep them in mind for music jobs or creative jobs in general. Share their events on social media. Also, it’s really important to let them know you appreciate what they do. We all really thrive on validation. Buy their music. Buy their CDs. Go to their shows. Make them feel seen and acknowledged and appreciated for what they’re doing.

Follow the Final Girls Berlin Film Festival on Facebook and don’t miss their 2018 screenings this February. You can listen to Choral Hearse here. For further reading on promoting women in the Berlin music scene, check out our feature with Bang On. 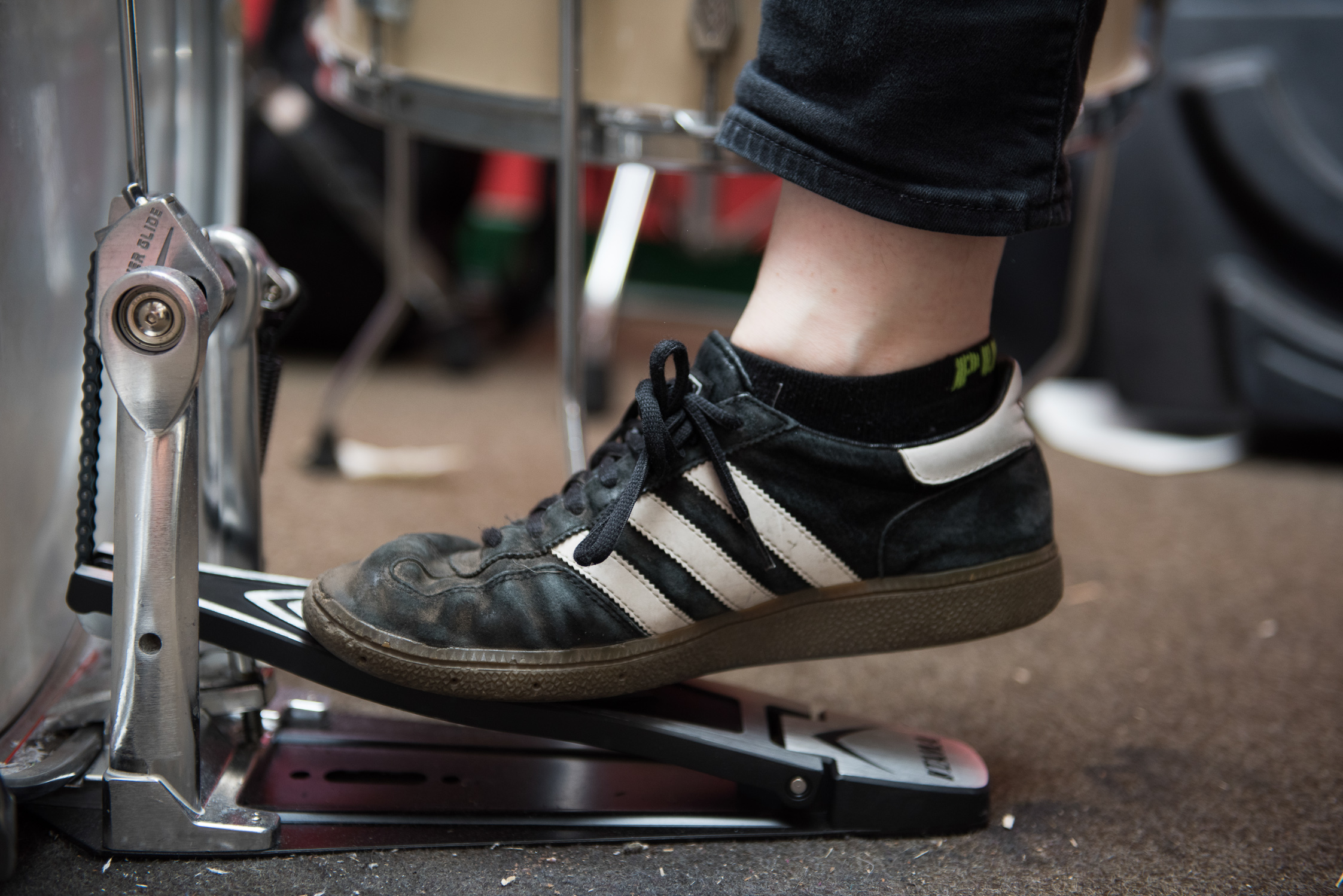