A Bloody Fight For Reproductive Rights

Cute Fruit Undies on taking action in Trump’s America, one period panty at a time There are many forms of activism, but they don’t all come with the satisfyingly bloody revenge found in Cute Fruit Undies. Founder and creator Sarah Palatnik’s underwear line finds power in panties and fights for reproductive rights, one cute undie at a time.

One particular line of CFU underwear is called the Bloody Marys, but it’s not your typical tomato juice cocktail. It is a line of period panties with the faces of American politicians in the crotch – primarily, Donald Trump. With her company, Sarah is using the power of underwear to destigmatize the period and bring attention to issues of reproductive rights – with the added bonus of bleeding all over Donald Trump’s face. A woman’s ‘time of the month’ is often considered something gross or shameful – so much so that we often resort to euphemisms to talk about it. CFU works to make the period visible, to ‘make it cute again’. Luxury items such as undies become tools to fight misogyny and celebrate the naturally occurring bodily process. We talk with Sarah Palatnik to find out more about Cute Fruit Undies and taking action in Trump’s America, armed with only blood-stained and leak-proof period panties. 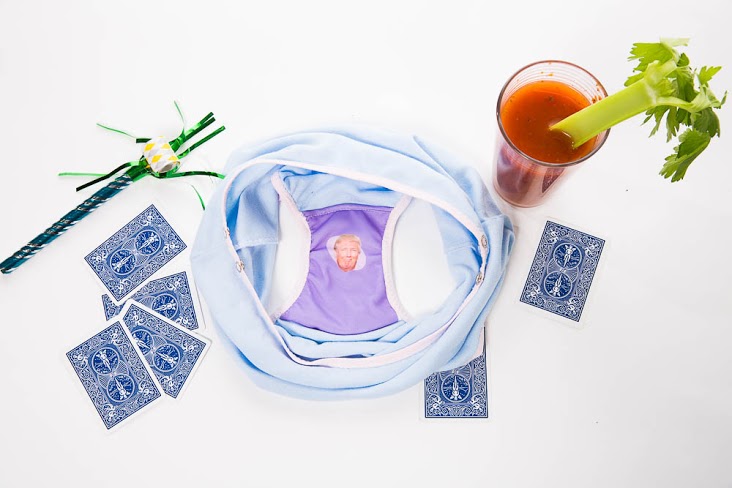 How and when did Cute Fruit Undies begin? Did it develop as a reaction to the political atmosphere in the USA? Cute Fruit Undies began officially in March of 2016. The idea for period underwear with Trump’s face in it came to me a few months earlier than that though, when it wasn’t clear yet just how insane the country is politically. I think Trump had announced his candidacy, but no one was taking him seriously, I don’t even think he had made the Megyn Kelly “blood coming out of her wherever” comment yet. But there have always been horrible politicians who try to make reproductive and general health care hard to access, so I thought the idea was kind of funny. CFU’s lifespan has just so happened to coincide with Trump’s rise to power, and the subsequent misogyny that has been revealed and encouraged since.

Where were you on Inauguration Day and how were you feeling? How have you used CFU to take action in Trump’s America? I was at the Women’s March in NYC! At first I was nervous and didn’t really want to go because large crowds yelling aren’t exactly my cup of tea, plus I was feeling pretty depressed about the general state of affairs. But I found it was an exciting, supportive, safe environment, so I left feeling more hopeful that a strong statement had been made to the world, it wasn’t just a part of the like-minded echo chamber that I tend to surround myself with. I want to note that part of the reason it felt “safe” was because there was a large turnout of white folks and police are less likely to instigate violence on white bodies. The march was a symbolic, inspiring event, but there are things to be criticized about it as well. 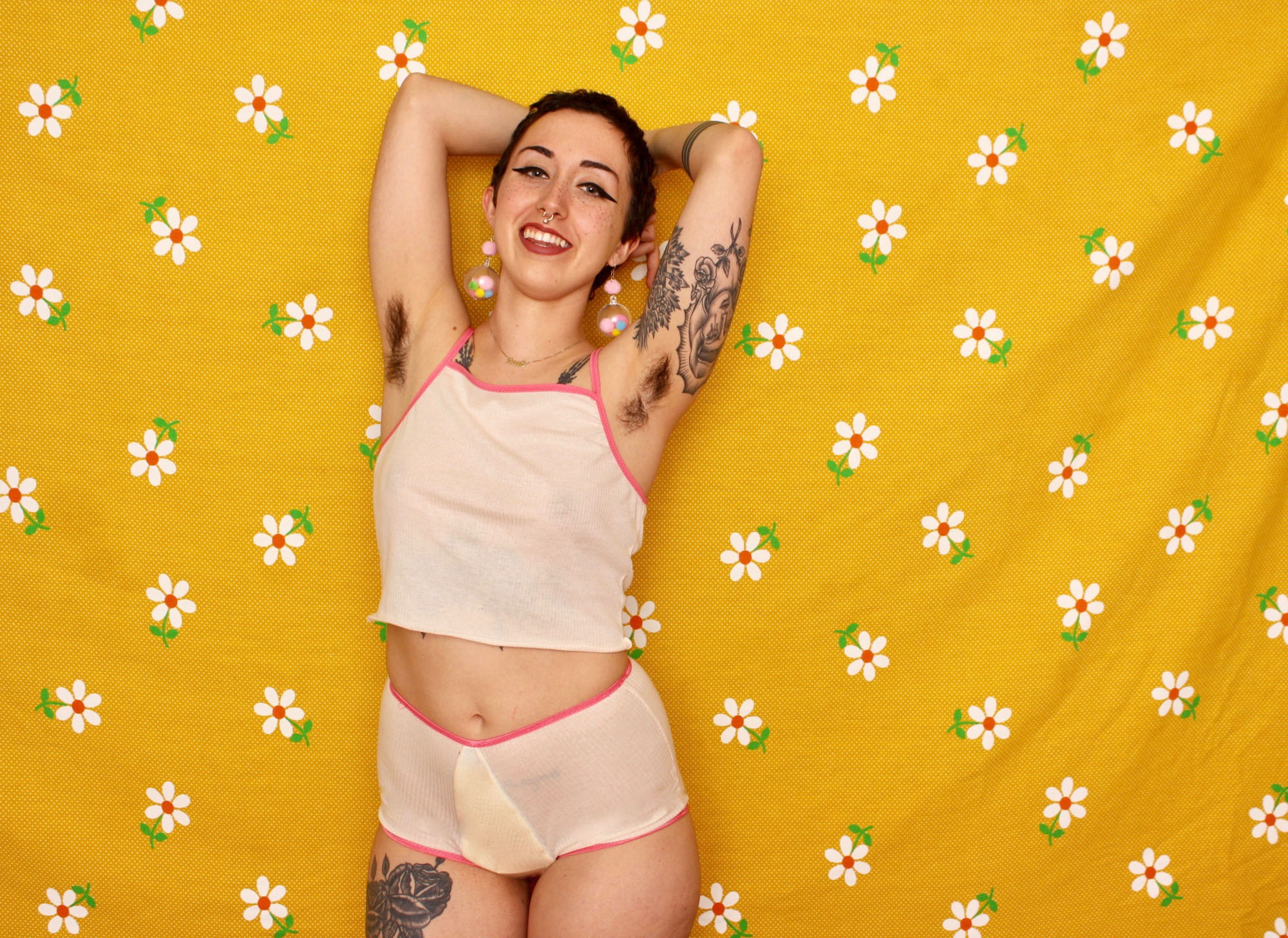 Why did you decide to work specifically with underwear? How is underwear central to your activism? Because underwear’s the best! I think underwear is really fun because it’s kind of an ultimate luxury item. People wouldn’t know if you were wearing boring underwear, so to go out of your way to wear something that you love that won’t be seen by anyone besides maybe your immediate partner/friend circle, is to do something just for yourself that makes you happy.

The underwear is central to CFU’s message because our kind of “main issue” is reproductive rights, so a garment that sits near, and in a way, draws attention to reproductive organs just makes sense.

Tell us about the Bloody Marys line and the Blood Dumpsters. What is a Blood Dumpster? How did you come up with the idea for the Bloody Marys? The Bloody Marys line is a line of period panties that have the faces of politicians who are working to limit reproductive rights in the crotch. We refer to these politicians as Blood Dumpsters. Period panties are underwear you can wear on your period without a pad, tampon, menstrual cup, or sponge, and ours are absorbent and leak proof, antibacterial, and odor free. We started out with nine Blood Dumpsters, now we only do Trump and Pence, because they’re the most powerful and are some of the worst offenders against repro rights. As I said before, the idea just kind of came to me as something funny to try, because I was already sewing underwear for myself. How are you addressing the stigma surrounding periods? The Bloody Marys take periods, which society generally tells us are embarrassing, gross, and should be kept a secret, and turns them into something symbolically powerful, humorous, and very visible in a subversive way. (But the underwear is leak proof, so it’s only visible from the inside!)

What has the response been like? Has it been controversial? Any noteable reactions? Overall the response has been overwhelmingly positive. Within a week of posting about the Bloody Marys on Facebook and Instagram almost every major online news source (BuzzFeed, The Huffington Post, Broadly, The New York Times) had written a positive article about CFU. There have of course been trolls as well. My favorite troll article was written by a men’s rights group backed by the KKK. They repeatedly called me horrible names and brought up that I’m Jewish. But the cherry on top is they feature photos from my Facebook that they think are of me, but are actually of my friend who is trans but the photos are of her before beginning to transition. So all these photos are captioned “there’s she is! There’s Sarah, that disgusting woman!” but they’re not of me, they’re of my pal, so we joke that The KKK were the first people to gender her correctly. 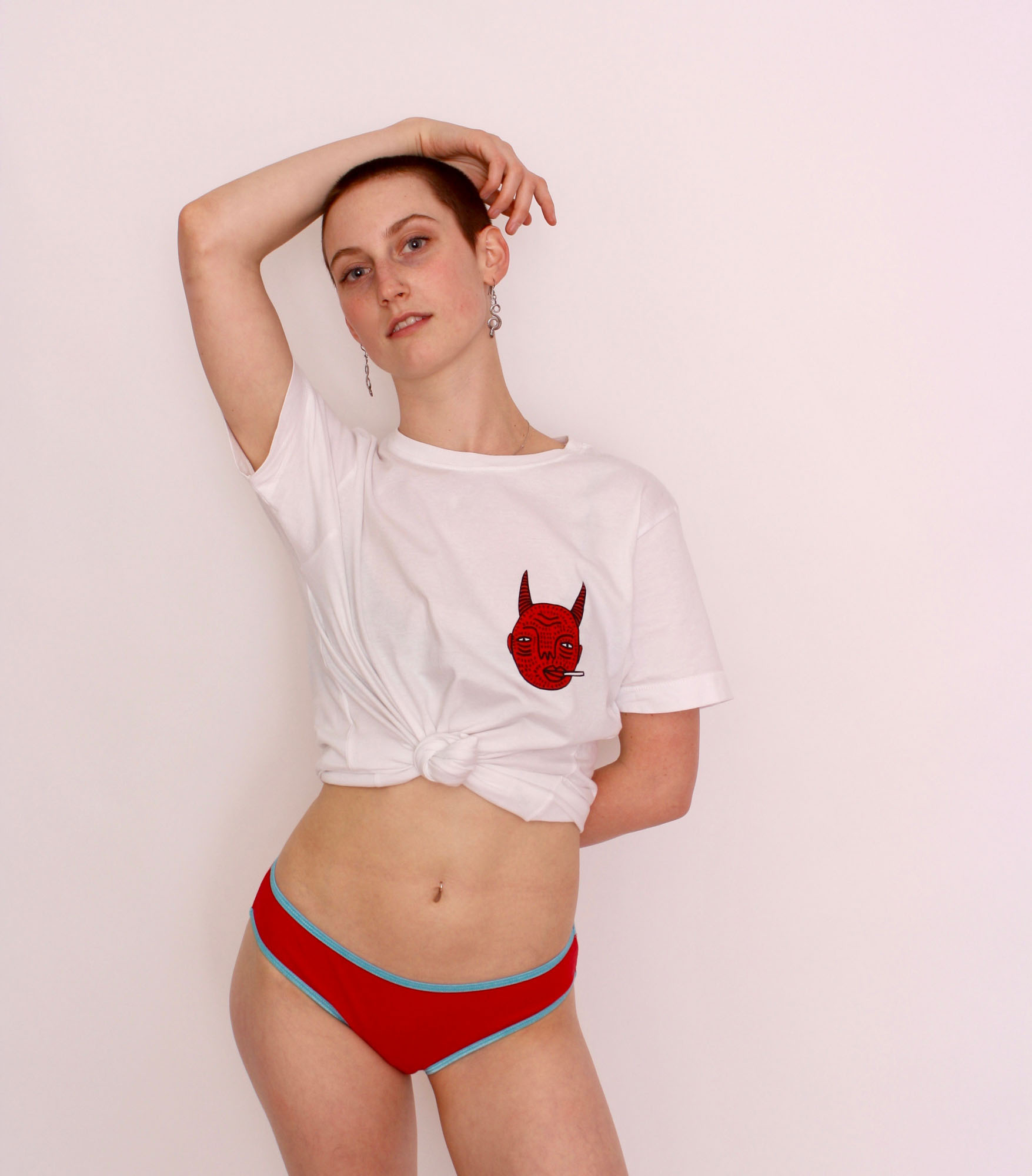 That said, access to abortion is extremely important for people who can get pregnant. There are going to be pregnant folks who want to terminate pregnancies whether or not abortion is legal, and whether or not they believe life starts at conception. In countries where it’s illegal (Chile, Ireland, Poland, to name a few), rich pregnant people travel to a different country where abortion is legal to get their safe abortions, and poor pregnant people attempt to get their abortions in extremely dangerous conditions, i.e. they’re not performed by a doctor in a healthcare facility, which can be incredibly traumatizing and painful and can lead to complications and death. So as long as abortions are going to happen anyway, why wouldn’t we make them as safe as possible? This is what Planned Parenthood is working to do. What are you working to achieve with Cute Fruit Undies? Ultimately I want CFU to be more than a business, I want it to be a community built around strength and humor against the various forms of oppression we all face daily. By that I mean, trading underwear for money is the current form of CFU, but eventually I want it to be more about the people who are part of this community creating, learning, and having fun together. I know that’s a bit vague, but if I went into detail it would be an essay so let’s leave it at that!

Check out Cute Fruit Undies on Etsy or follow on Instagram to find out more about the project.