Wedged between buildings, sitting outside a supermarket entrance, or idle in a beer garden; these seemingly mundane corners of the city are where you might encounter one of Berlin’s thirty-odd analogue photo booths, characterised by the bold red letters on their sides that spell out: Photoautomat.

The exact number is always changing. Booths come and go, or migrate from season to season. Others spring up in new locations each year, moved as Berlin’s vacant lots gradually morph into construction sites. But many are evergreen – landmarks in their own right – like so many of the city’s best-loved anachronisms.

With their red insignia and entirely mechanical workings, the Photoautomaten masquerade as hardy survivors from the days of the Wall. Their story in Berlin doesn’t begin, however, until early summer 2004, when two friends with a passion for photography placed a booth on an empty corner near Rosenthaler Platz. 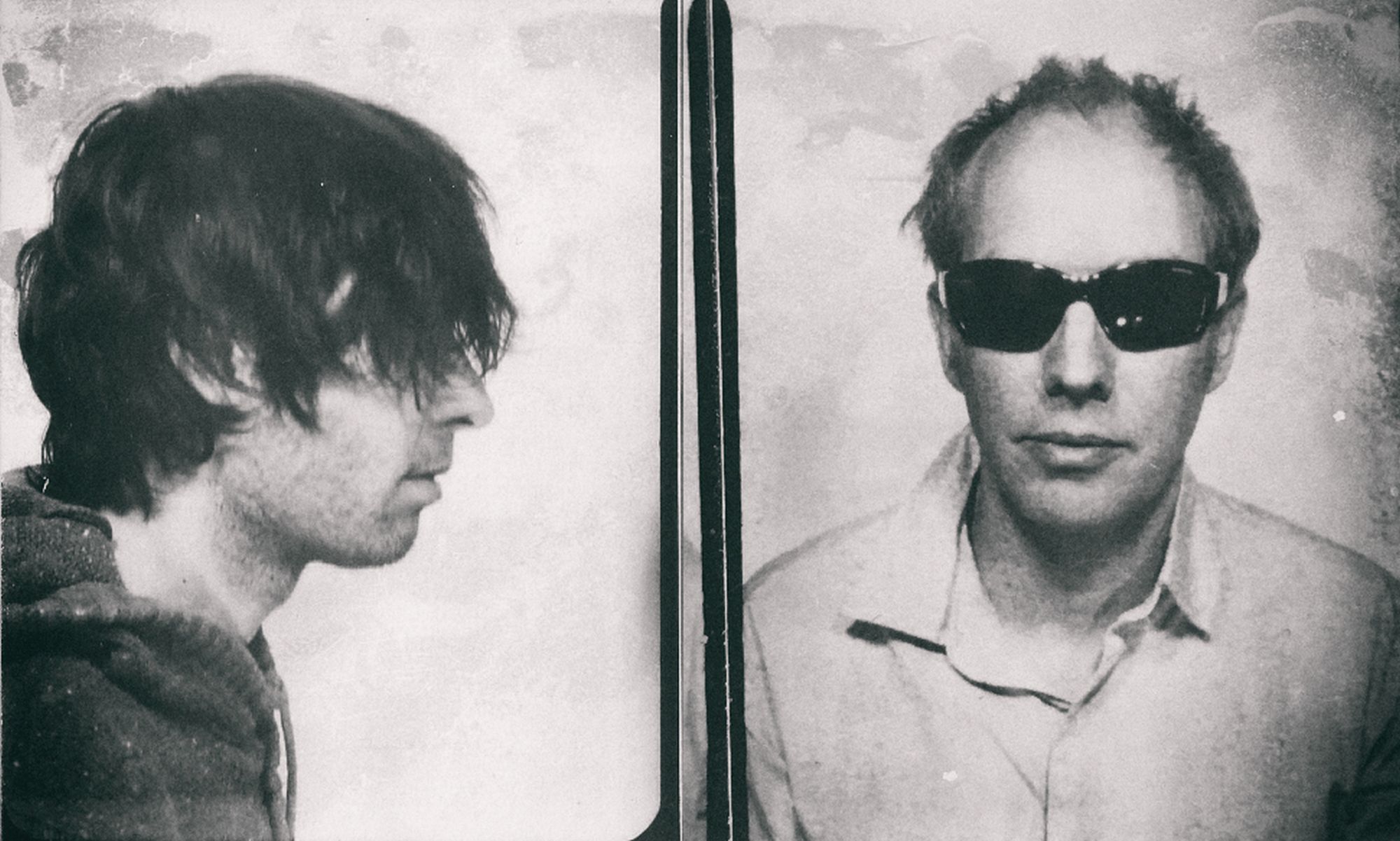 Asger Doenst and Ole Kretschmann were on a trip to Zürich when they first saw the analogue photo booths still in regular use. Asger, a photographer, and Ole, a writer and carpenter, were immediately convinced that it was something they should bring to Berlin. They got their hands on an old model – one that had already given a lifetime of service – and began the task of preparing it for the streets.

“It was actually kind of falling apart,” Ole begins. “The booth was from the ‘50s, 1956 or something. It wasn’t in a state to put outside. So I came up with the look, the materials and how we’d renovate it while Asger looked for a location.”

Asger elaborates: “At that time in Berlin you had many possibilities. It wasn’t difficult to find a good place and some okay places. But a really good place is always difficult.” Until they began working on Photoautomaten, public photo booths, ever a staple of train stations and shopping malls, had never been out on the streets of Berlin. In a city of tourists, squats, and DIY club culture, few people thought the project would make it through its first weeks. 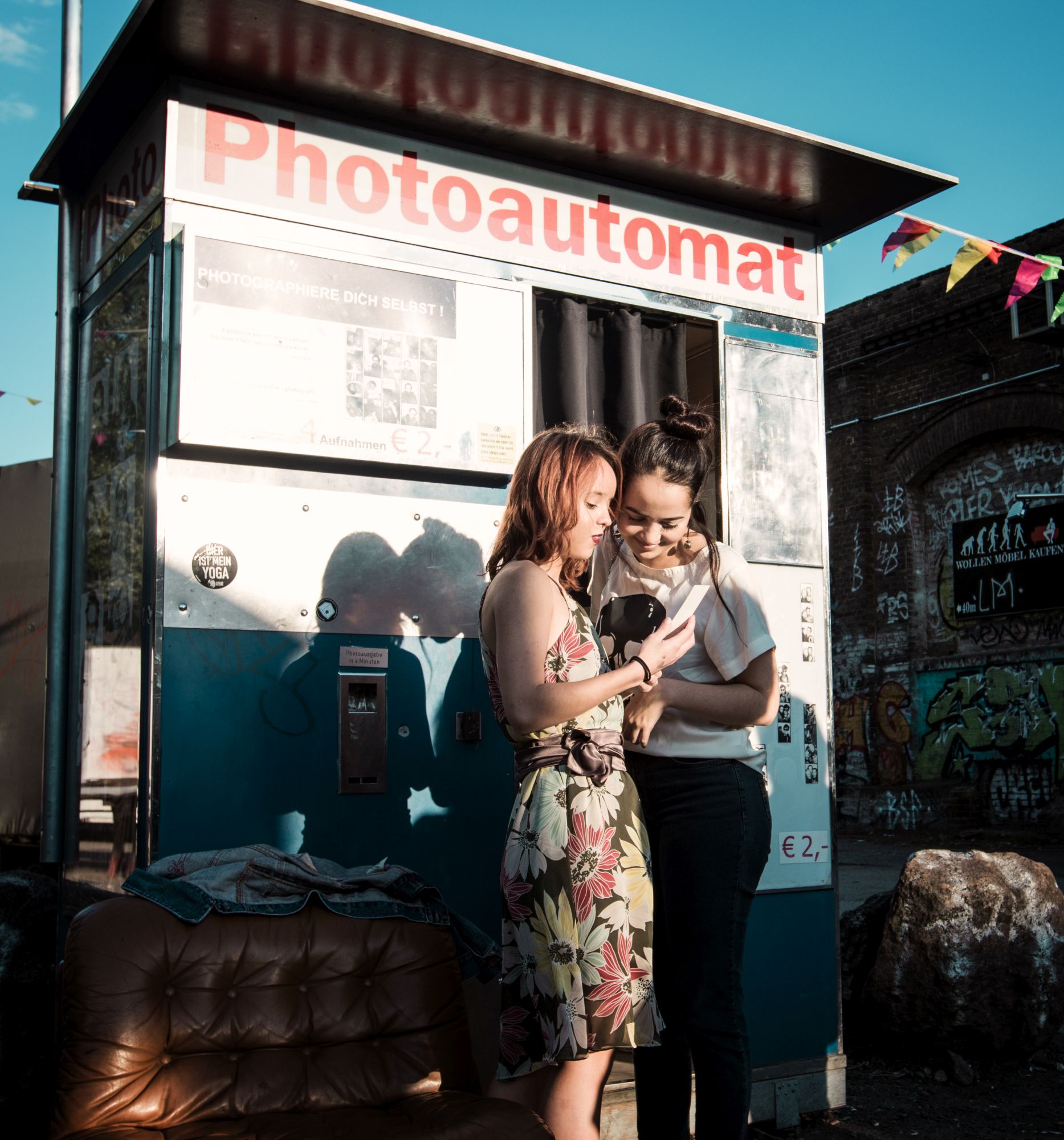 “We were prepared for a really slow start,” Ole admits. “Our main concern was that it would be destroyed. Everybody around us was like, ‘Oh, this will not last for a week in Berlin!’ So we didn’t expect much to happen. I remember our goal was to pay our rent, like 200 euros, so if this thing could make 400 euros that would be a dream come true.” As it turned out, the nonbelievers were wrong. “The opposite happened,” Ole continues. “People embraced it as something worthwhile, and they liked the idea. They hung out there, and there was no aggression whatsoever. People saw that some freaks were doing something public and accessible; that’s how it was perceived. And the cool thing was, these people had these photos to go around and show their friends. It was a discovery for people.”

People come back. We believe that’s the core of the business, that people like to return.

The fascination that Ole and Asger had shared for the remarkable quality of these old passport photos wasn’t lost on tourists or resident Berliners. In a matter of weeks the booth had transformed a quiet corner of Weinbergsweg into a place to hang out, and it wasn’t long before Berlin-based culture magazine 030 and the TV show Polylux turned up to get the story.

“People stopped and used it. That was the amazing part of it, you know? We didn’t expect much to happen. We didn’t know if anyone else would share the excitement,” Ole remembers. Now knowing that both concept and booth could survive on the streets of Berlin, Ole and Asger acquired and renovated a second Photoautomat. They took it to locations across the city, including the newly-opened Bar 25. Prenzlauer Berg hosted a third booth in 2006, and by then it was evident that the project had far more potential than either had ever anticipated. 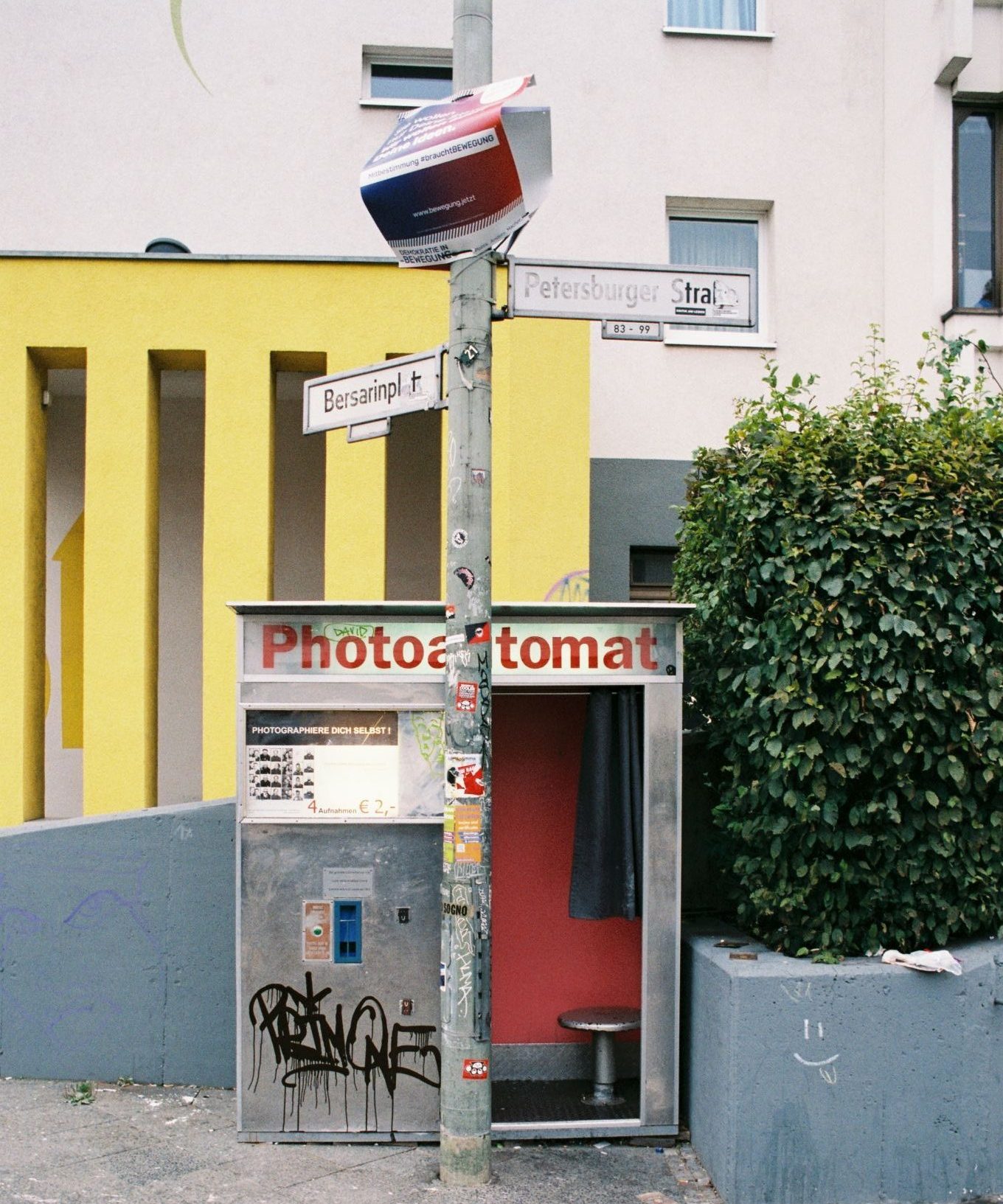 “I remember that Asger and I had a talk,” Ole says. “For me it was the first time with access to a possibility. What do we want? Let’s position ourselves. Do we want to grow this?”

They agreed that they did, and set out on a mission to track down analogue photo booths all over Europe. They travelled to Zürich to meet Martin Balke, owner of Schnellphoto AG, the company that had kept some 150 booths in operation across Switzerland until 2005. Martin’s company, however, was going out of business. He and his brother Christoph were nearing retirement, and they had no one to take the reins. “Martin told us: ‘You can make something for yourself. Berlin is a good place to do something.’ He was so supportive. He was always with us.”

Learning how to run a larger network of booths from Martin and Christoph, Ole and Asger began to expand, taking on their first Photoautomat employee in 2007 and buying up and refurbishing old units wherever they could find them. 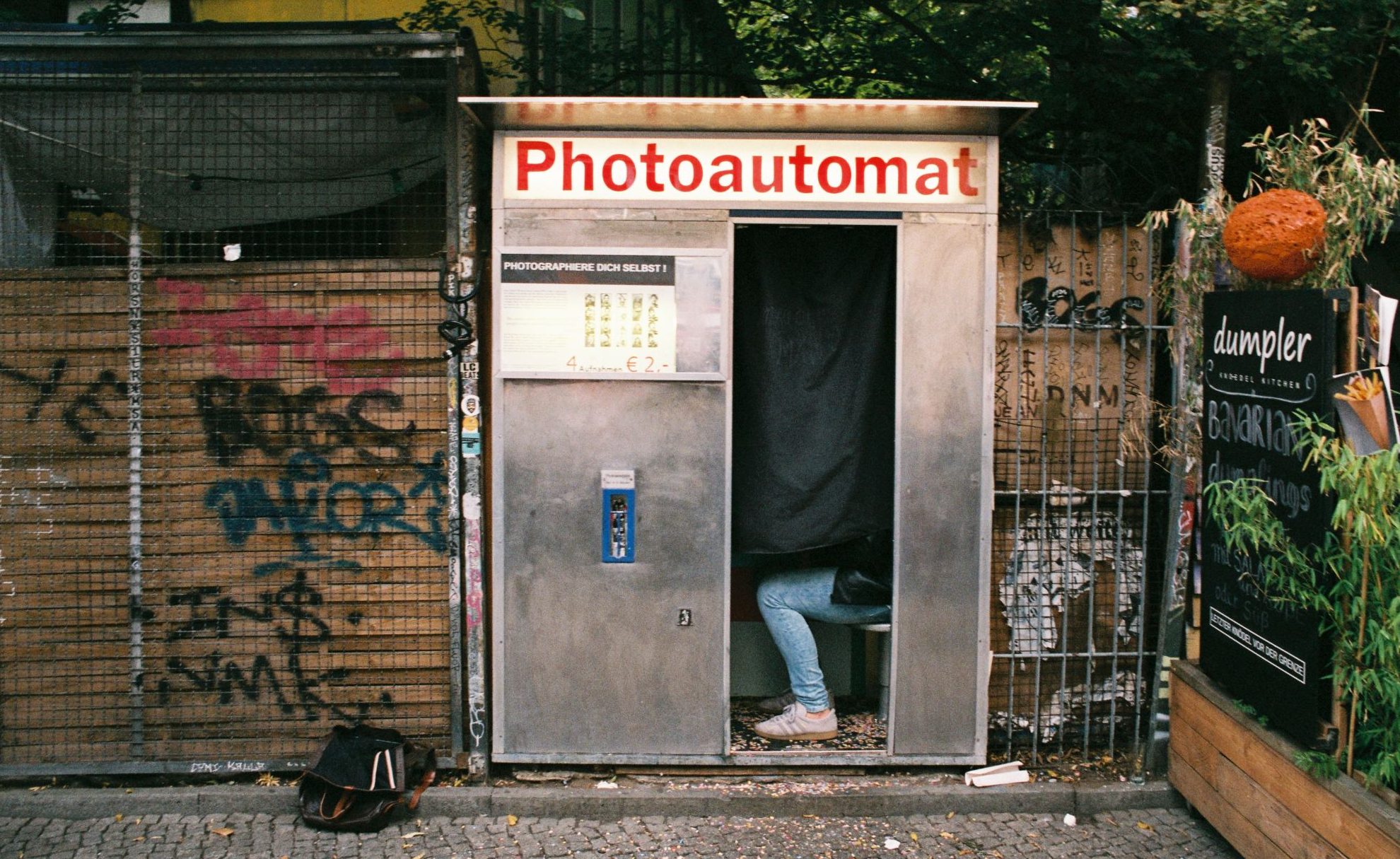 Today there are as many as 35 booths in operation at any one time in Berlin; they can even be spotted on the streets of Leipzig, Hamburg, Cologne, Zürich, and as far away as Florence.

The Berlin Photoautomaten are available for use 24 hours a day, all year round. Five part-time staff help manage things, with someone always available to field a call from a disappointed or, as is more often the case, an impatient customer. Reminding callers what it feels like to wait a whole five minutes for processing is the task of most of the day-to-day calls, but when photos really do fail to appear – which happens just once in a thousand times, according to Asger – customers are always refunded. They’re determined to maintain a guarantee that the photos always look their vintage best. It’s a passion and commitment they share with their mentors from Zürich.

“We shouldn’t take all the credit [for the way the photos look],” Ole says, modestly. “But we could take the credit for trying to keep the standard up. We aim for a certain look, and that’s what we fell in love with, so it is our goal to have these photos come out all over the place. At any time. That’s our ambition.” 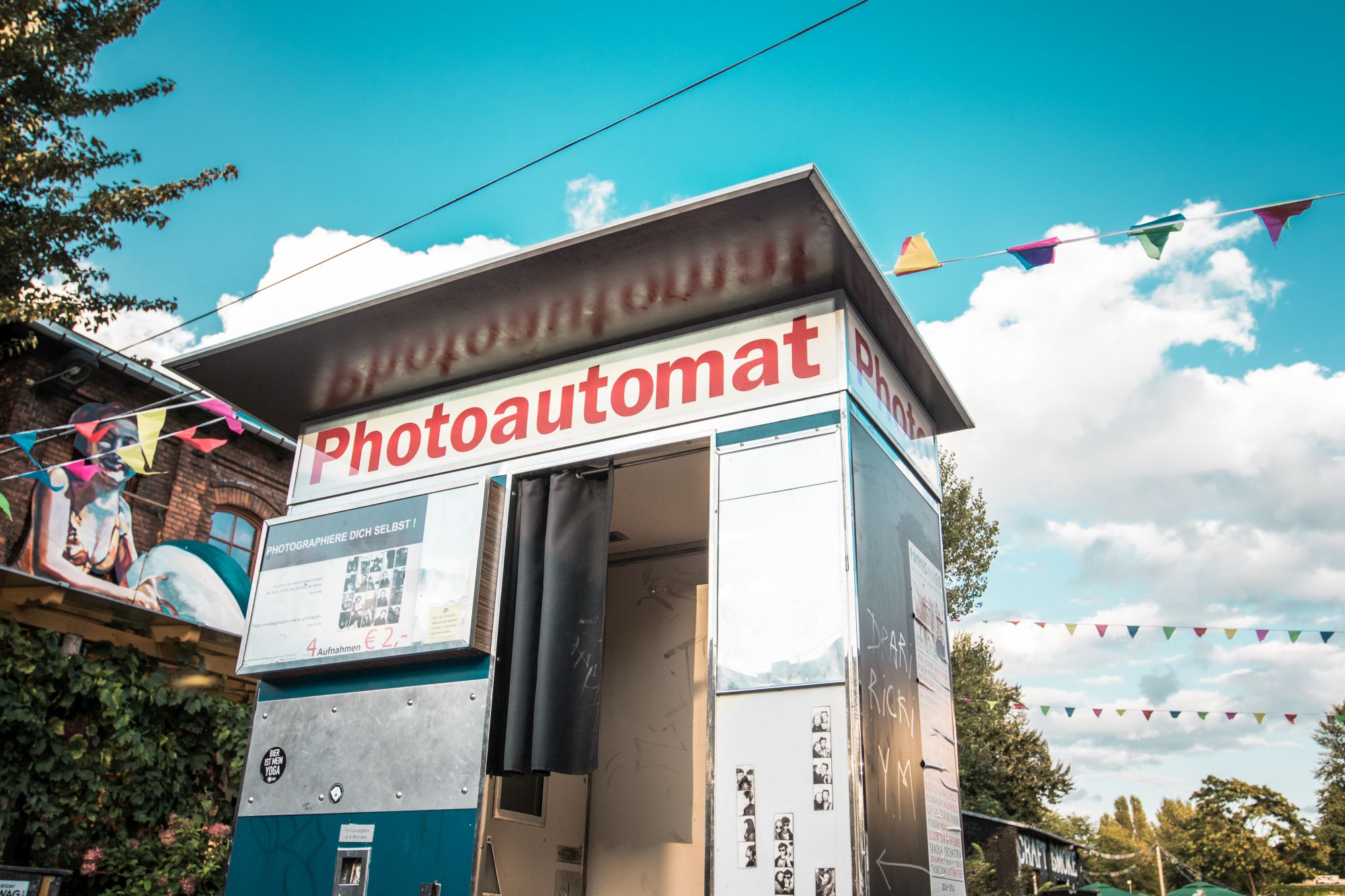 Indeed, anyone who has used a Photoautomat knows the charm and quality of the photography itself. With striking contrast and sharp yet warm black and white, the four passport-sized photos look a comfortable level or two better than even the best filter on any app you can find. Add to that the joy of holding a physical print in your hands, and it’s no wonder these slender strips have become a recognisable feature on fridges and notice boards in Berlin homes.

However, since every booth is unique, maintaining that look and quality comes down to dedication and expertise. “Some are really old and the parts are not the same,” Asger begins, touching on the technical challenges of the project. “It’s not industrial production, and we got them from different places all over the world.”

“They’re characters, these booths,” Ole continues. “Some are a bit sensitive. Some are really strong, you just have to listen to the machine and get a sense of what it is. Some booths are from the 1950s, others are from the ‘70s or ‘80s. The parts are not interchangeable; they are individuals.” 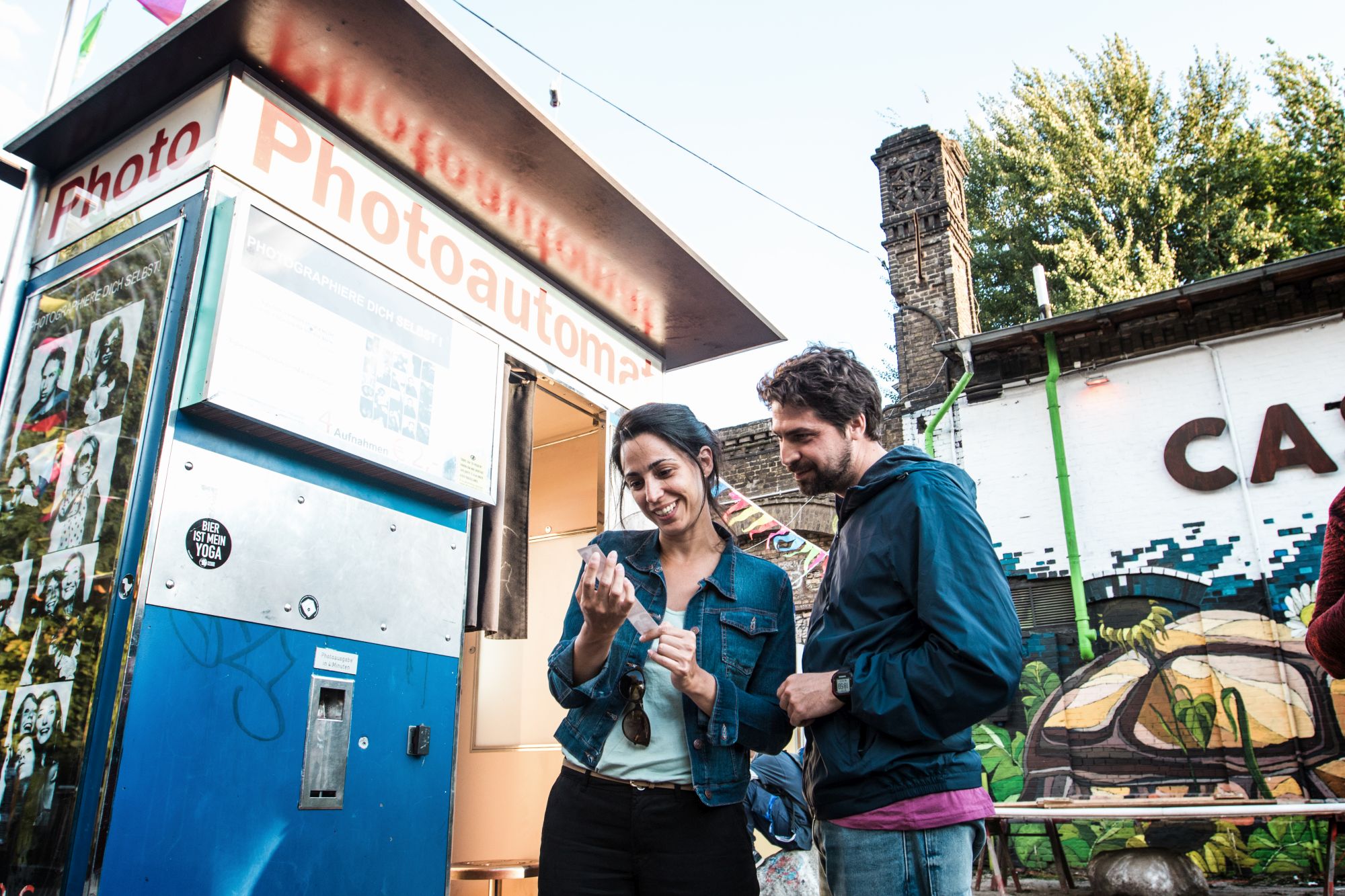 Ole and Asger believe it’s an expectation of quality, and the guarantee of a memento, that has kept the project going. Though certainly irresistible to visiting weekenders, they are convinced the majority of their customers are locals who return to the machines time and again. “We only exist because we have returning customers,” Ole says, sincerely. “That’s for sure. People come back. We believe that’s the core of the business, that people like to return. That’s why we want to keep the booths clean and the quality of the photos as good as possible.”

Trusting in the quality, some Photoautomat aficionados will go as far as to call when a booth isn’t working as expected, contributing to a network of feedback from a population of eager participants. It’s a sign that, far from being the forgettable, here-today-gone-tomorrow street gimmicks that many predicted, these machines have become a cherished part of the city’s landscape: an accessible public good made all the more charming by the fact that they seem, somehow, to belong.

Over the years, that charm has also proved alluring to advertisers who are ever-ready to seize an opportunity to capitalise on Berlin’s unkempt chic at no extra cost. This is something Ole and Asger claim never to encourage. They have even, in fact, locked horns with the likes of the Berlinale, BVG, and Converse for use of the booths without permission. It wasn’t about getting paid a fair share, they assert, but about taking a stand. “It’s important to try and stop it from happening again. We don’t want to be [associated] with Converse, even if we get thousands,” says Asger.

In keeping with this spirit, the Photoautomat entrepreneurs have kept their venture customer-friendly. For the 13 years that the booths have been in operation in the city, a strip of photos has maintained the ever-affordable price of two euros. That feels increasingly modest as Berlin reluctantly plays catch up with its wealthier and better exploited European neighbours. From the beginning, the Photoautomaten have made use of the last of the city’s unused lots, industrial yards, and unofficial public spaces. Like the squats, bars and clubs of the past, they too have brought life to areas left untouched by the once invisible hand of the Berlin property market. But like many small business owners, Ole and Asger are confronted by development in the city. From their workshop on Bersarinplatz, they look to find new locations for the booths that have been displaced by new buildings and soaring rents. “You lose places and then you need to find new ones,” Asger says. “But there’s less choice because they’re building on every free spot. So it’s getting more difficult. It’s a big task to keep the locations we have now.” But the pair remains optimistic, buoyed by the knowledge that the Photoautomaten have become an established, if inconspicuous, part of life in the city. “People even stay in contact [with one another], because they wait in line together,” says Asger, referring to the way the booths can form new friendships as people bond over that five-minute eternity as they wait for their photos to emerge.

The Berlin Photoautomaten offer a shared experience to return to time and again; an analogue anachronism in a digital era. In strips of newly-developed photos, they provide a way for the city to take a portrait of itself.

To find Photoautomaten near you, check out their website for locations and further information on the project. 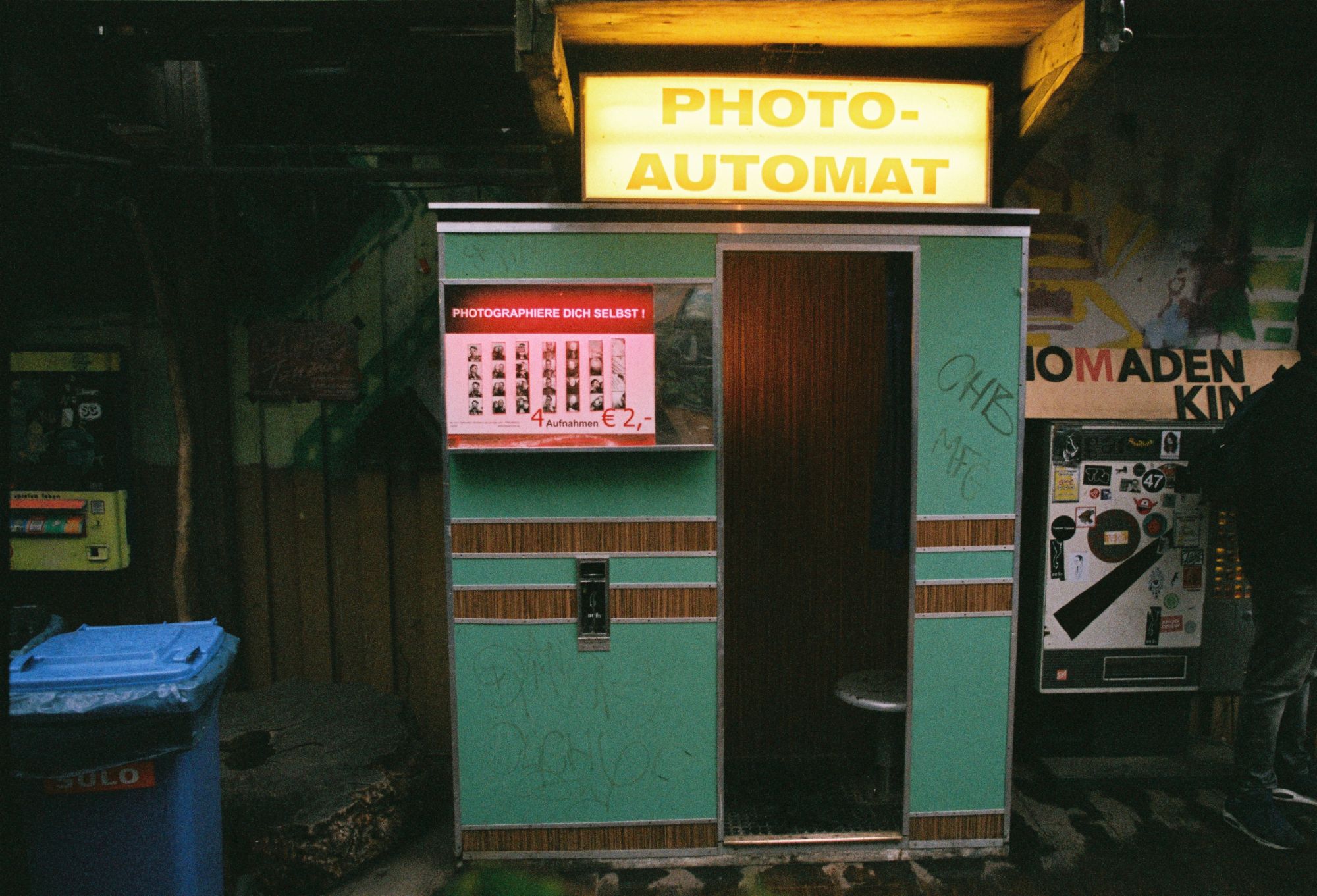