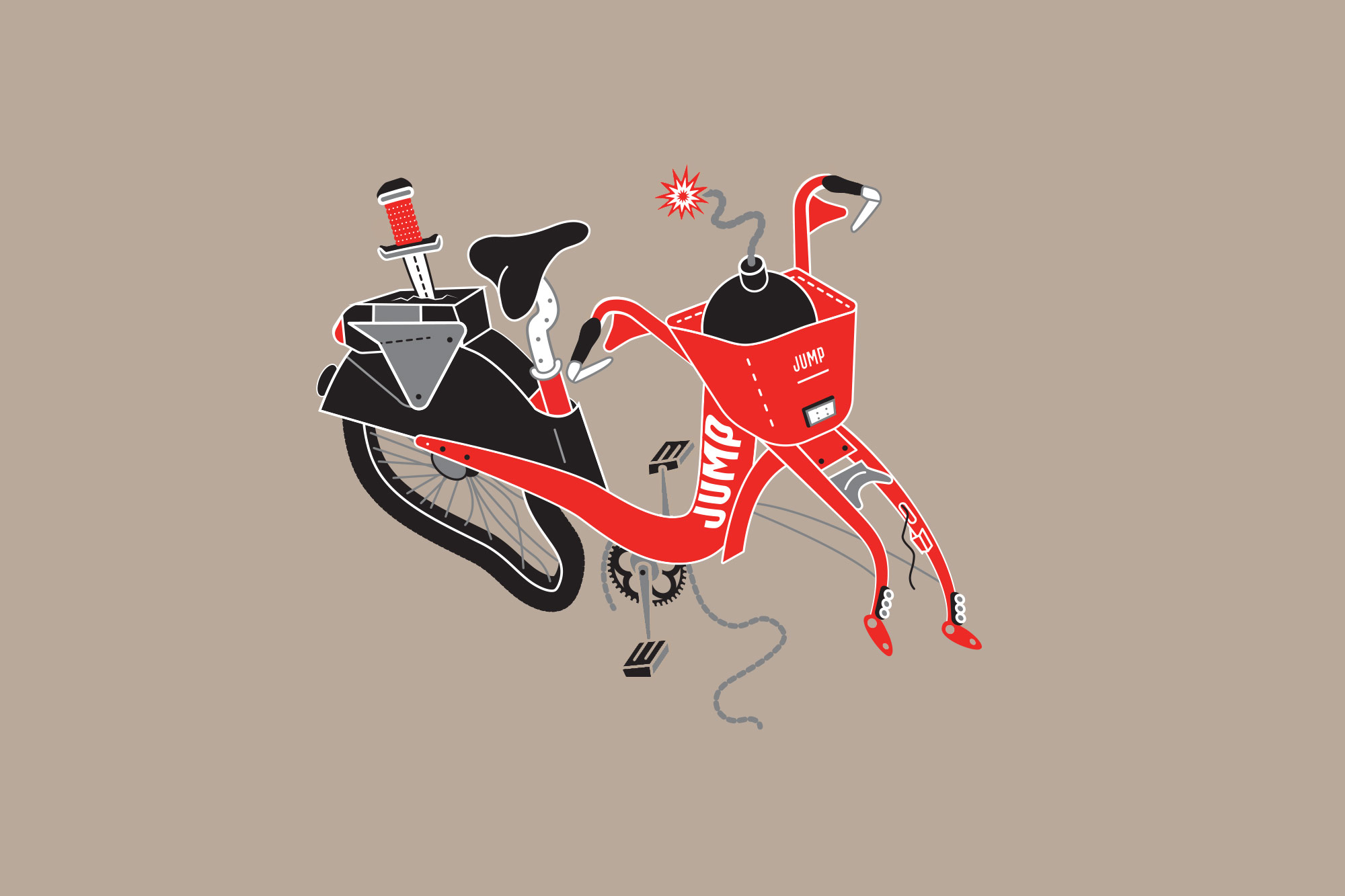 Words By Joel Dullroy
Photos By Illustration by Andrew Berry

Finally the system has a punchable face, The system – that cloud of untaxed, privacy-killing, data-robbing online empires – has materialised on Berlin’s streets. It takes the form of one thousand bright red electric bicycles, with two thousand rubber tyres just waiting to be punctured.

The bicycles belong to Uber, better known for not employing drivers of non-taxis. For a week this summer, it seemed every red Uber bike had a flat wheel and a graffiti tag. An accompanying manifesto appeared online (the rebels are as virtual as the overlords). “Uber plätten!” it cried, usefully conflating the German terms for flat tyres and bankruptcy. “Stab the shitty bikes wherever you see them, pop the tyres!” the website urged. “The employment conditions of Uber workers, and the ecological impulse behind e-bikes and e-rollers, are contrary to a social and ecological political economy… When they are used at all, it is mostly by tourists and better-earning Berliners.”

As a revolutionary strategy, knifing corporate bike tyres is playing quite the long game. When Uber ceases to exist, it won’t be because of the cost of fixing inner tubes in inner Berlin. The company loses billions annually, but is pumped alive by investors. Every journey costs them money. If you want to bankrupt Uber, ride their bikes.

There’s plenty to hate about Uber, from its toxic founder to its regulation evasion. But deploying electric bicycles is the least evil thing the company has ever done. Why discourage good behaviour?

It’s not just Uber – all such private-public utilities get punished. Mobikes are piled high and set ablaze in Friedrichshain’s former squatting district. Nextbikes are dismantled for parts. Lidl Bike touchpads get punched in. And the latest arrivals, stand-up electric scooters, get stranded high on signal boxes, if they’re lucky.

Now, Berlin has a long tradition of burning automobiles. Anarchists have set thousands of cars ablaze since the 1990s, a dual-purpose protest against gentrification and pollution. But there’s no equivalent between a private vehicle and a shared bike.

As we race towards climate apocalypse, we can’t afford to wait for perfect solutions.

Berlin’s air quality is among the poorest in all of Germany thanks to cars. Our U-Bahns are becoming uncomfortably crowded. We need more mobility modes without motors.

It’s true that battery production for e-vehicles is problematic. But it’s nothing compared to the damage caused by fossil fuel cars, which choke our cities and cook our planet. As we race towards climate apocalypse, we can’t afford to wait for perfect solutions.

Perhaps you can understand the saboteurs’ annoyance at the plague of pavement-clogging pedelecs. We’ve all been nearly run down by a renegade rider, or tripped over a tangle of tyres. But shared bikes and scooters are only annoying because cars exist. Only one third of Berliners are car owners, yet they occupy 100% of the parking spaces. How about we turn two-thirds of car parks into bike and scooter spots? That would end the unnecessary war between riders and pedestrians.

And as for the saboteurs’ discontent at “better-earning Berliners”: this approach to class war is both ignorant and ineffective. Bashing your neighbour doesn’t eliminate inequality. Shared bikes, while corporate owned, are practically a public service. They cost as little as €1.50 an hour. Even Uber’s fancy bikes, which cost up to €10 an hour, are cheap compared to buying an e-bike, which costs well over €1,000. Slashing their wheels only denies low-income earners the chance to enjoy an occasional e-ride without owning one.

It’s a thin line between the tourist and hipster hate of such misguided leftists and the refugee hate of the fascist right. They both spring from the same soul poison – fear of losing one’s space and place and envy of others seeming to get ahead. Indeed, the far-right Alternative für Deutschland has supported taxi-driver demonstrations against Uber. Let’s hope the AfD and the black bloc find no more common ground.

It’s strange to see left-identifying activists campaign in support of the traditional taxi system. Taxis are polluting, anti-social and expensive – and far more likely to be used by the rich than a bike. Taxis deserve to go out of business. Their drivers can become bicycle mechanics – there are plenty of such jobs going in Berlin, thanks to the shared bike companies.

Uber’s red bicycles are a convenient punching bag for a multitude of modern concerns. But attacking them ultimately hurts us all. Anyone angry at shared bikes and scooters should redirect their rage. To twist George Orwell: two wheels good, four wheels bad.