Berlin City’s Left-Green Years Could Soon Be Over 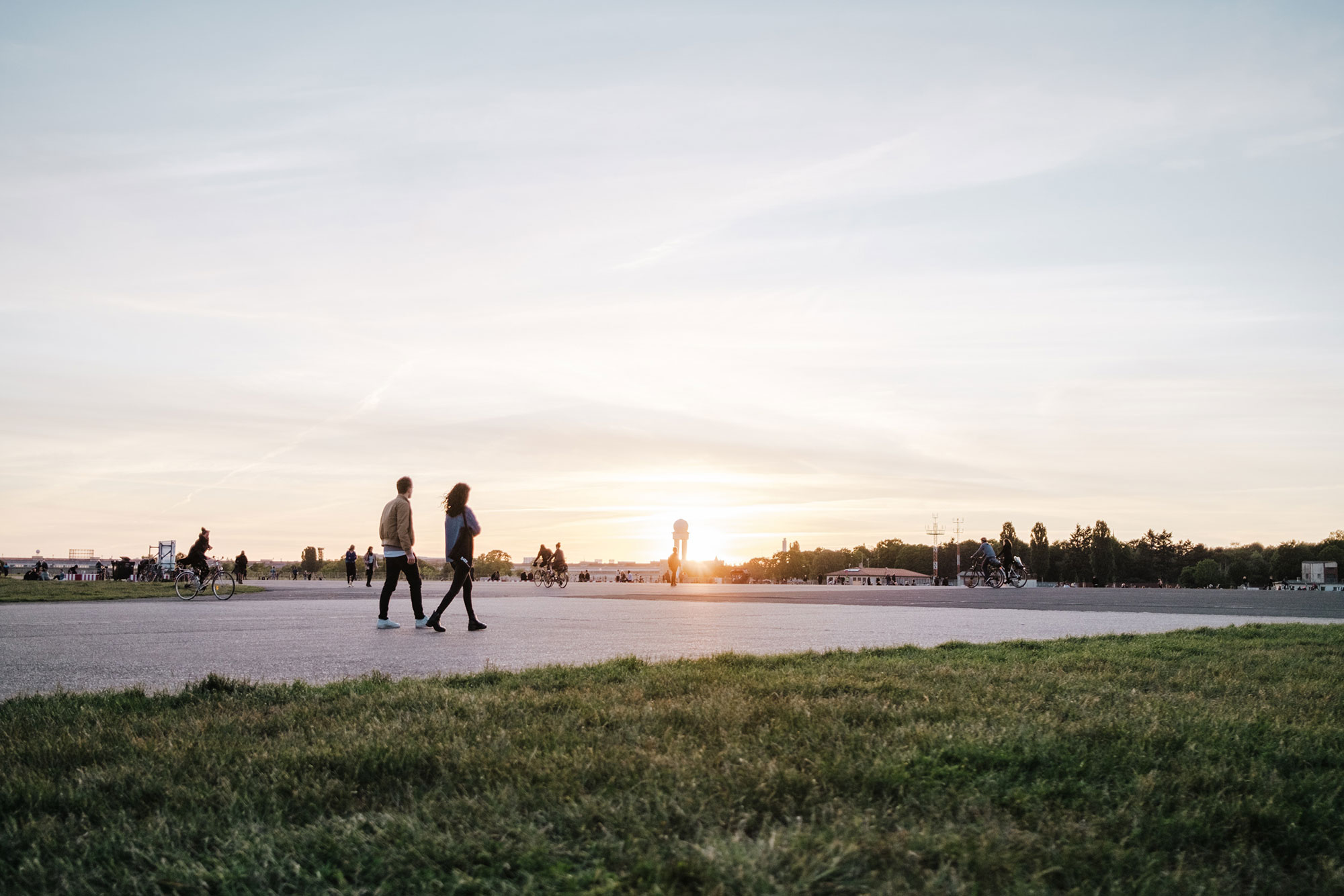 A new inner-city highway, construction on Tempelhof, rent reform stopped: Berlin could be radically reshaped if the SPD and CDU win power in the city-state elections, writes Joel Dullroy.

Berlin is on track to elect a disgraced doctor as its mayor, and could install a conservative coalition favouring cars, construction in parks and less rent regulation. It would be a radical change from the left-green government of the past five years.

Voters in the city-state of Berlin will elect their regional representatives on September 26, the same day as Germany’s federal election. The latest opinion polls show the Social Democrats (SPD) are the most popular party at 23%. That would give them the right to form a coalition. Indications are that the SPD may dump their current coalition partners, the Greens and Die Linke, and instead seek a coalition with the Christian Democrats (CDU).

That outcome seems likely after comments by the SPD’s mayoral candidate, Franziska Giffey. She declared the SPD wouldn’t partner with any party that sought to implement an agenda of forcibly purchasing housing from large real estate companies.

That puts Giffey on a collision course with Die Linke, who support just such a policy. The leftists are campaigning in favour of the parallel referendum which calls for all properties owned by companies with more than 3,000 apartments to be appropriated by the state. The Berlin Greens are less explicitly wedded to the referendum goals, although its mayoral candidate Bettina Jarasch says she plans to vote ‘yes’.

While polls show the current coalition parties would win a collective 52% and could be returned to power, Giffey’s comments reveal she wants to go in a different direction. The SPD has several times governed Berlin in coalition with the CDU, most recently from 2014 to 2016. The CDU are now polling in second place at 19%. An SPD-CDU coalition may need the support of a third party, but is still a strong possibility. 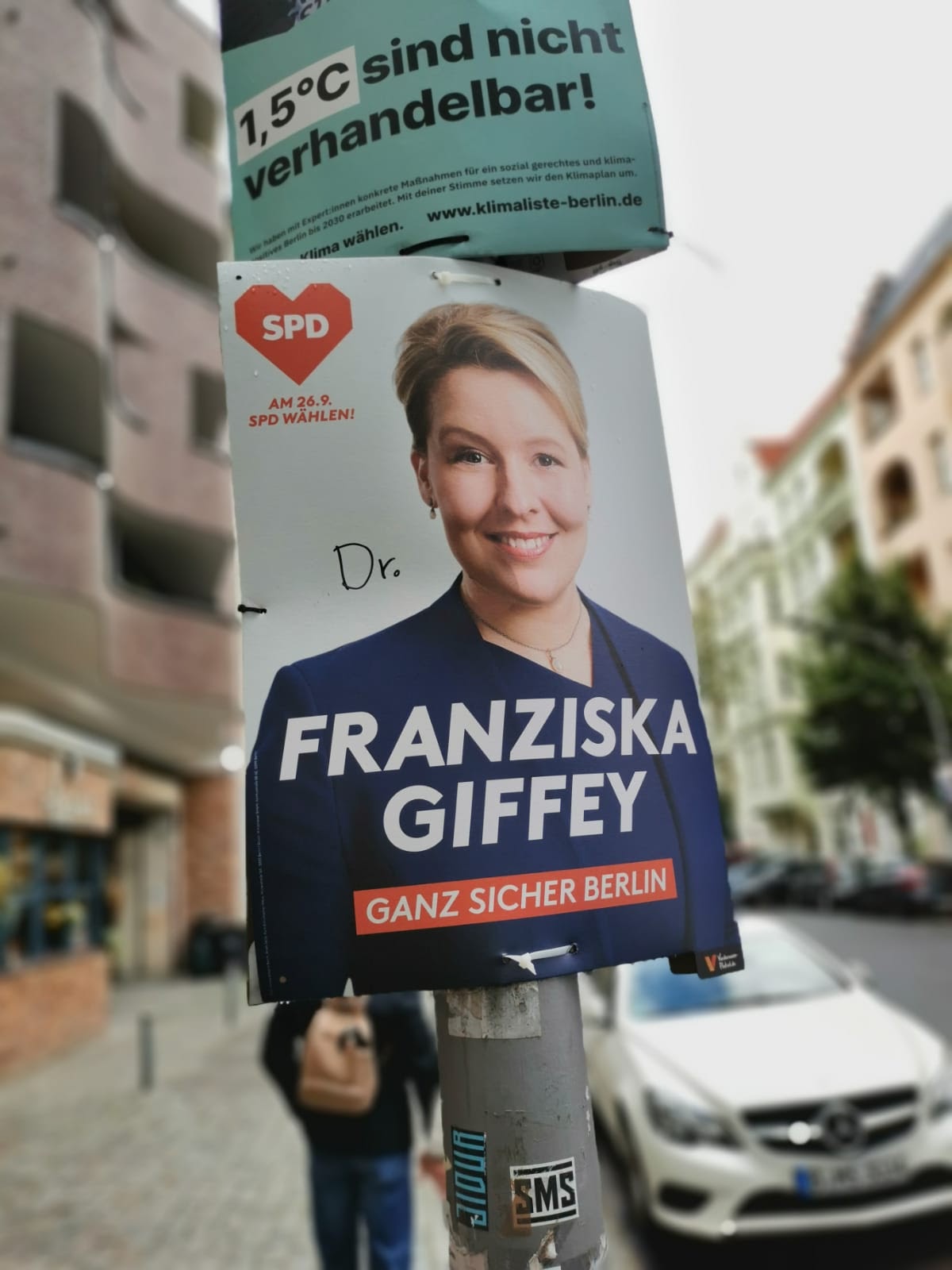 Giffey is a popular yet problematic candidate for the SPD. Only months ago, Berlin’s Freie Universität stripped her of her doctorate after an investigation found she had plagiarised parts of her PhD dissertation. More recently, an FU professor has also alleged her master’s thesis contained much copy-pasting.

Giffey resigned as a federal minister in May due to the scandal, but remained the mayoral candidate for the SPD. The party is wagering her local popularity – stemming from her years as district mayor of Neukölln – will override the negative press.

So far polls show the bet is paying off: Giffey is the most popular of the mayoral candidates. Some Berliners aren’t letting the former doctor off so easily – her electoral posters are being tagged with the title ‘Dr.’

So what might Berlin look like if Mrs. Giffey takes the SPD into coalition with the CDU? The parties share several agendas that differ widely from the current government’s environmental and renter-friendly policies.

Germany’s most expensive highway project could get a new green light. Construction of the A100 autobahn came to a halt under the left-green coalition. The highway has already carved a slice through Berlin’s southeastern districts, but the Greens and Die Linke forced the SPD to agree to not extend it any further.

But Giffey hasn’t given up on the highway project. She called the current stalled status “simply crazy.” The SPD wants to put the issue to a referendum vote. They would find support from the CDU, who are car-friendly and want more highways.

If completed as planned, the A100 will cross the river Spree, then plough through the neighbourhoods of Straulau and Friedrichshain, pushing residents, businesses and cultural spaces out of its path. It could bring an additional 110,000 vehicles through the inner city and cost another billion euros.

For many Berliners, the wide expanse of Tempelhofer Feld is one of the few places to glimpse the horizon. The former airport has become Berlin’s most popular park, its emptiness being part of its appeal. But some politicians see the 355 hectare field – home to endangered skylarks and sheep, beloved of skaters and kite-surfers – as wasted space.

Would-be mayor Giffey is among them. She’s in favour of “moderate” housing development on Tempelhof. Many in the SPD have never given up on the idea of building on the park, despite it being rejected by 64% of voters in a 2014 referendum.

That vote ensured Tempelhofer Feld’s status as a no-construction zone was enshrined in local law. But Giffey, and politicians from the CDU and business-friendly FDP, want to hold another referendum to remove that obstacle. They say Berlin’s need for housing overrides citizens’ expressed preference for green space.

Opponents say there are plenty of other places to build, and don’t want public parkland being handed to real estate developers, who already possess some 50,000 unused building permits elsewhere in the city.

Across Berlin, bookshops, restaurants and community spaces are frequently forced to close when landlords suddenly increase their rent, or refuse to extend contracts. Unlike residential tenants, commercial renters have no rental rights.

The outgoing Berlin coalition attempted to fix that. It brought an initiative to the Bundesrat, Germany’s upper house, calling for a new federal law enabling states to limit commercial rent price increases. But the proposal is now stuck in the legislative process, and a coalition including the CDU is unlikely to push it forward. The CDU thinks commercial rental protections are unnecessary – even though the party had to leave its regional headquarters when its rent was tripled this year.

Berlin’s residential tenants are still recovering from the abolition of the Mietendeckel, the revolutionary law which temporarily froze and reduced rents. It started as an SPD policy, but was killed off by a constitutional court challenge mounted in part by the CDU. Should the two parties join forces, the conservatives are unlikely to allow the SPD to attempt any further housing reforms.

There’s another strong political party that could hold sway: the Greens are polling in third place, with 17% of the forecast vote. That makes them a viable coalition partner. Berlin could end up with an entirely new political constellation combining the Greens, the CDU and even the FDP. But almost every viable coalition involves the SPD. The coming state election is all about how much Berliners are willing to trust the ex-doctor Giffey.

To hear more from Joel Dullroy and to dive deeper into Berlin news, check out the Radio Spaetkauf podcast. 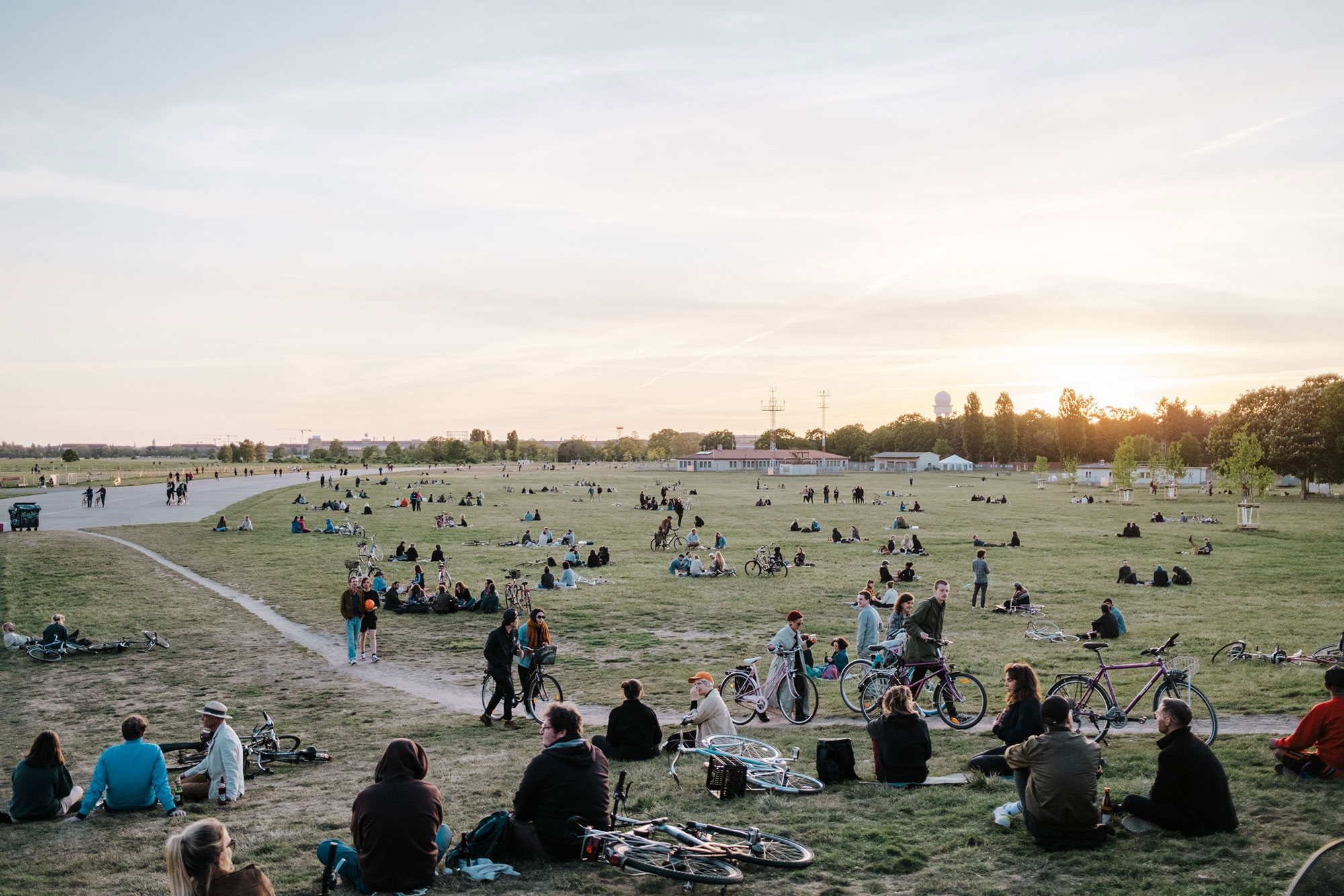