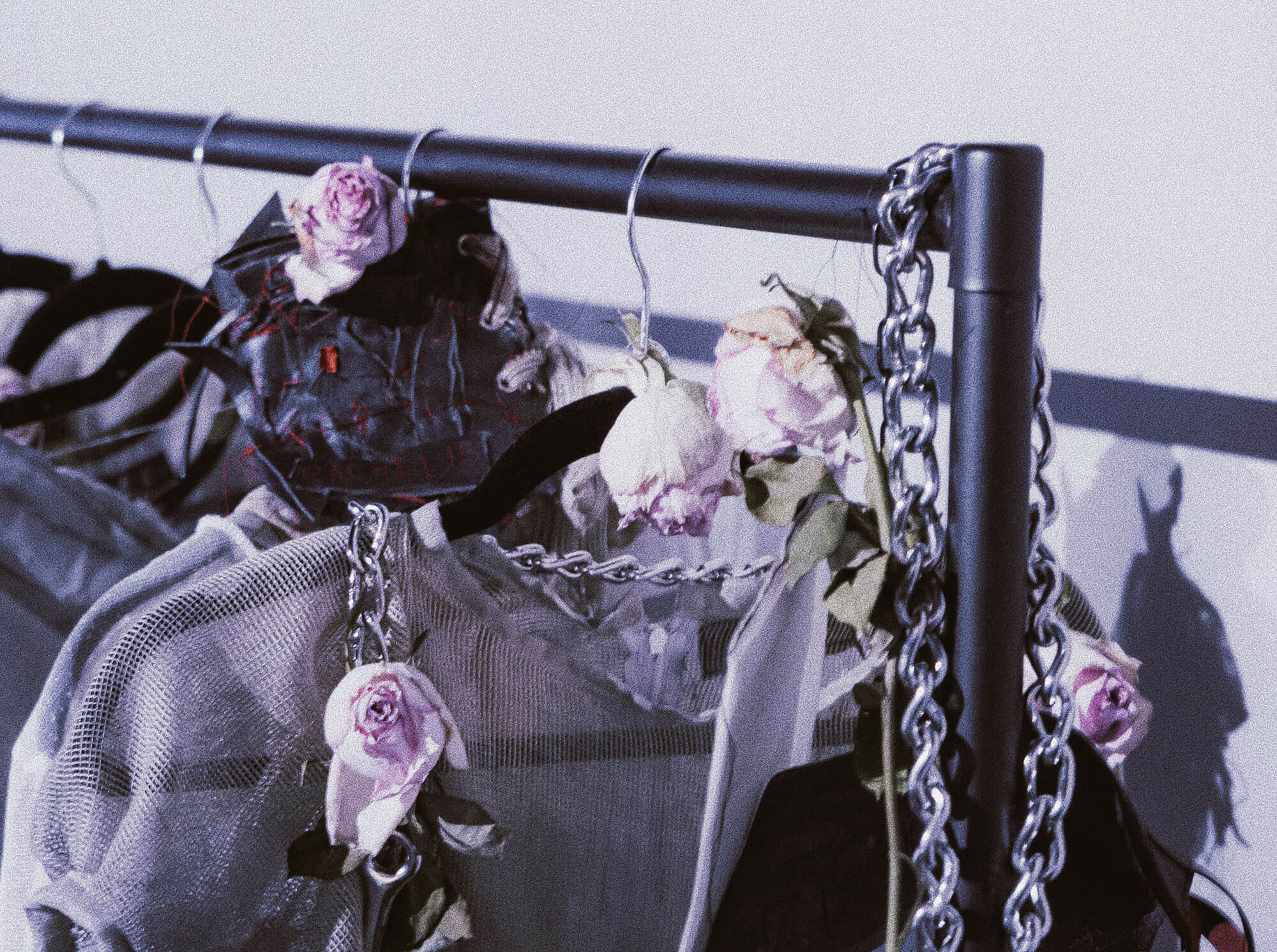 Produced in collaboration with Factory Berlin

Bluetooth (BLE) beacons typically used in retail for proximity-based marketing are affixed beneath the garments, advertising their position to a patch capable of generative synthesis. As a “coincidental attribute to early 20th century German artist Hans Bellmer,” the clothing is displayed on blow-up dolls, styled and arranged in lifeless and mangled positions. Like the dolls in Bellmer’s photography, the installation is both bizarre and unsettling.

As part of the By Appointment Only event series, participants in the second edition Factory Berlin x Sonar+D & Beats by Dr Dre Artist in Residence program share work they’ve been creating and conceptualising during the program. To close the winter season, Tony Cruise unveiled Dark Spring. Here we talk with Tony and Rachel to learn more about the inspiration and process behind this innovative work. 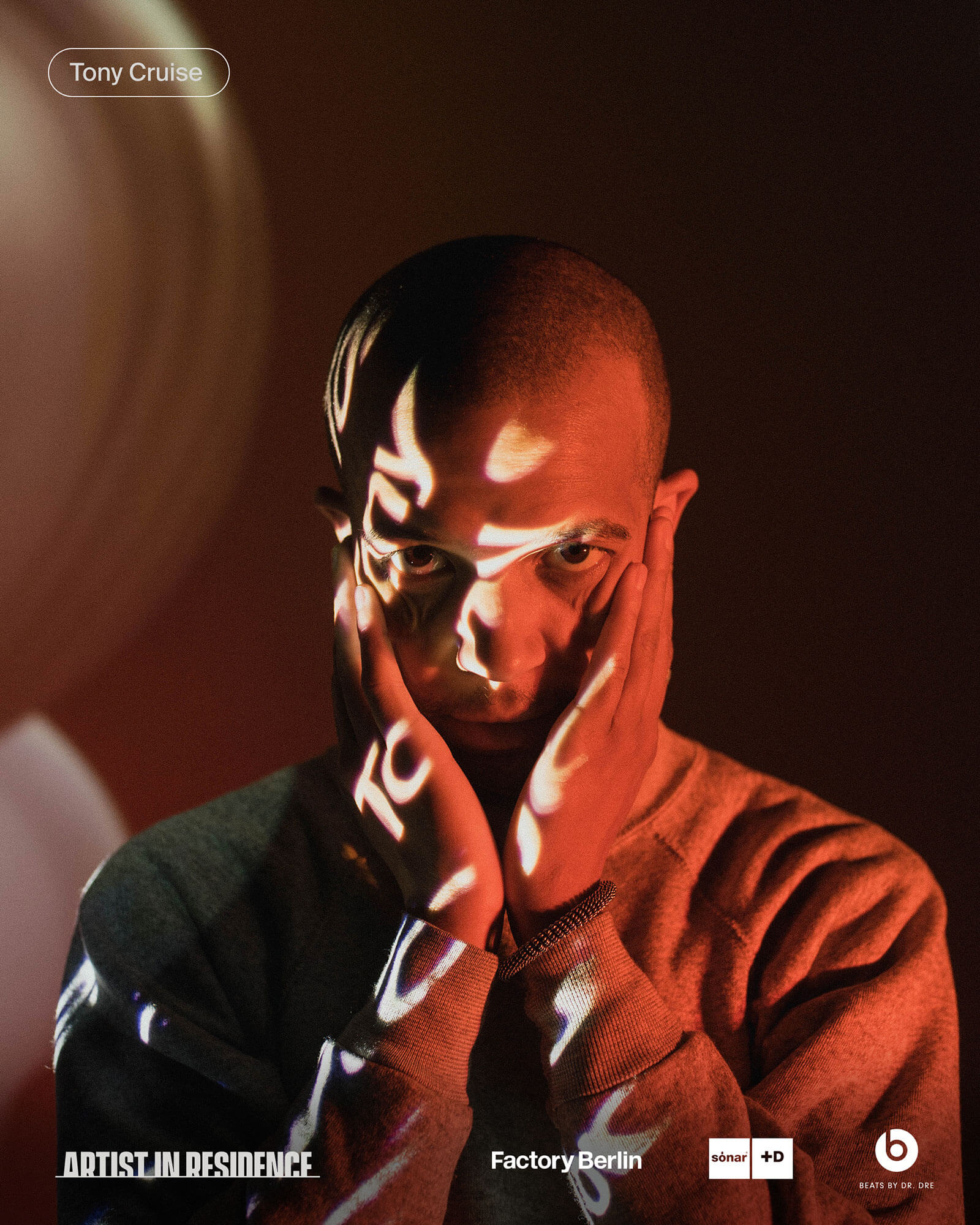 Why did you decide to incorporate fashion and tech in this work?
Tony: The runway is inextricably linked to the retail experience. We’re conditioned to glamorise brands through this self-referencing formula, including but not limited to trendy models, a pinch of exclusion, and symmetrical music. At the core of it all lies these insidious marketing ploys that manage to extend themselves offline (as evidenced with BLE beacons – hidden in plain sight). You can’t escape the reach. Even now, that same tech is being upcycled for contact tracing.

What was the collaboration process like?
Tony: We imagined a garment collection that flips these tenets and instead leverages those invasive, industry-specific technologies as a compositional tool – to break the phenomenon of self-validation and appropriation, and ultimately to withdraw sound from a complicit role in surveillance capitalism. Call me biased, but I’d rather let the clothes score themselves. I want to see true diversity, devoid of influencers – a collection uplifting marginalized bodies, black and brown and overweight and intersex models. All fashion must cease until a new norm is forged.

Rachel Crane and I want an eros and ethical assembly alike – adherence to health restrictions because that’s our reality in this moment and safety is sexy. The pieces of this collection were painstakingly hand-made with raw materials by the designer, an artist whose work I’ve been influenced by for years.

I hope that other designers have the same concerns in mind, but i won’t get my hopes up.

How did you approach the creation of the sound for the work?
Tony: As a composer, my primary concern tends to be honouring the medium of sound. Tomorrow’s music necessarily divests itself of symmetry. Capitalism necessitates a kind of hegemony, digestible chunks to its broth. The clothes in this collection are handmade, painstakingly-bloodied pieces – the sound that touches them must be of the same purity. To arbitrarily assign some sonic nostalgia to her palettes is blasphemy. How do you refract a dream manifest as cloth? Maybe you don’t – maybe we never should have tried – and perhaps that blank canvas is where truth has the opportunity to prevail. Instead, I’ve elected to sonify packets of digital waste designed for the retail industry. Years from now we’ll probably discover how harmful all of these signals were all along. My role is explicitly not to make something even or neat or pretty, since sound cannot be held.

My role is explicitly not to make something even or neat or pretty, since sound cannot be held. 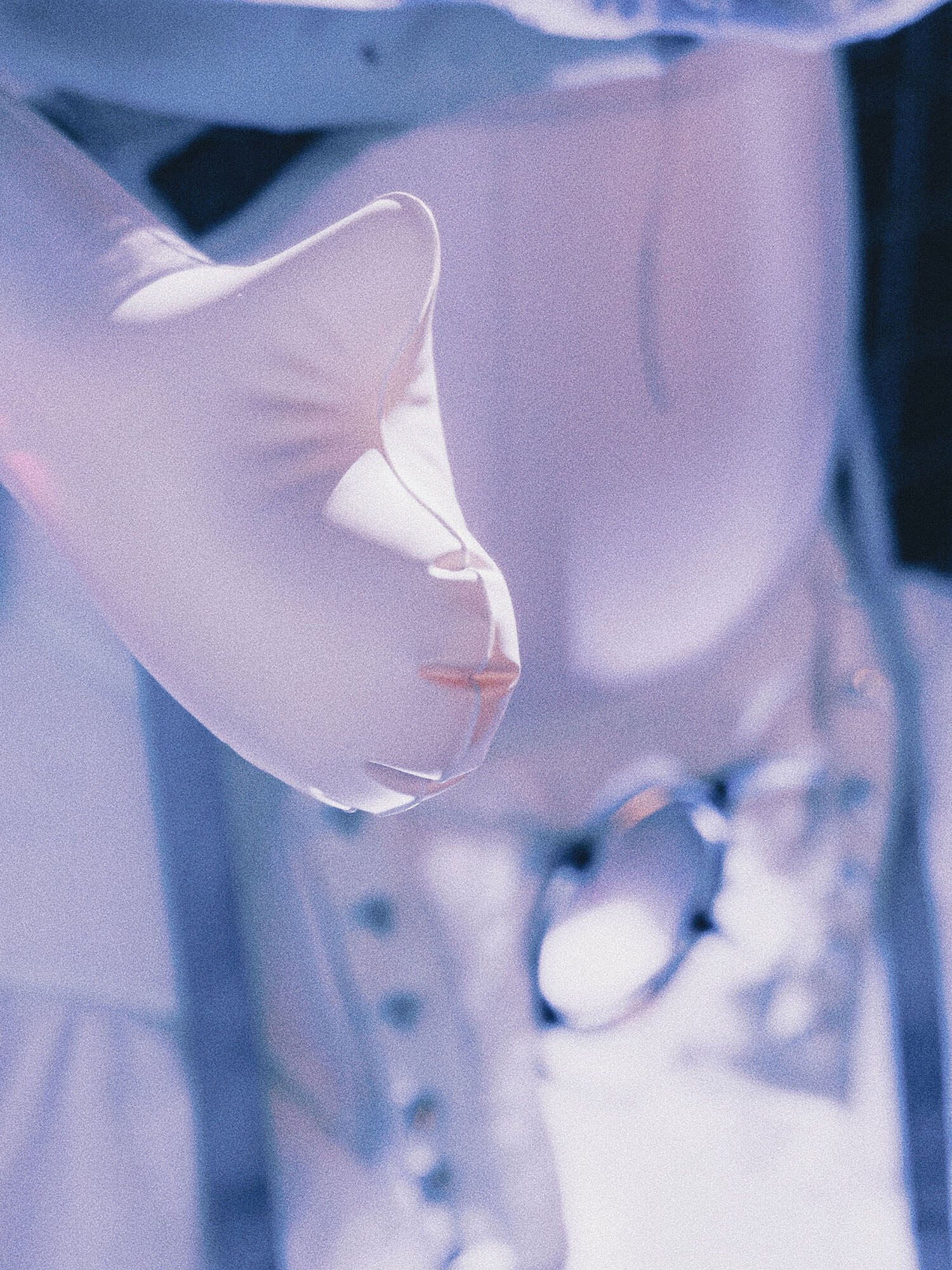 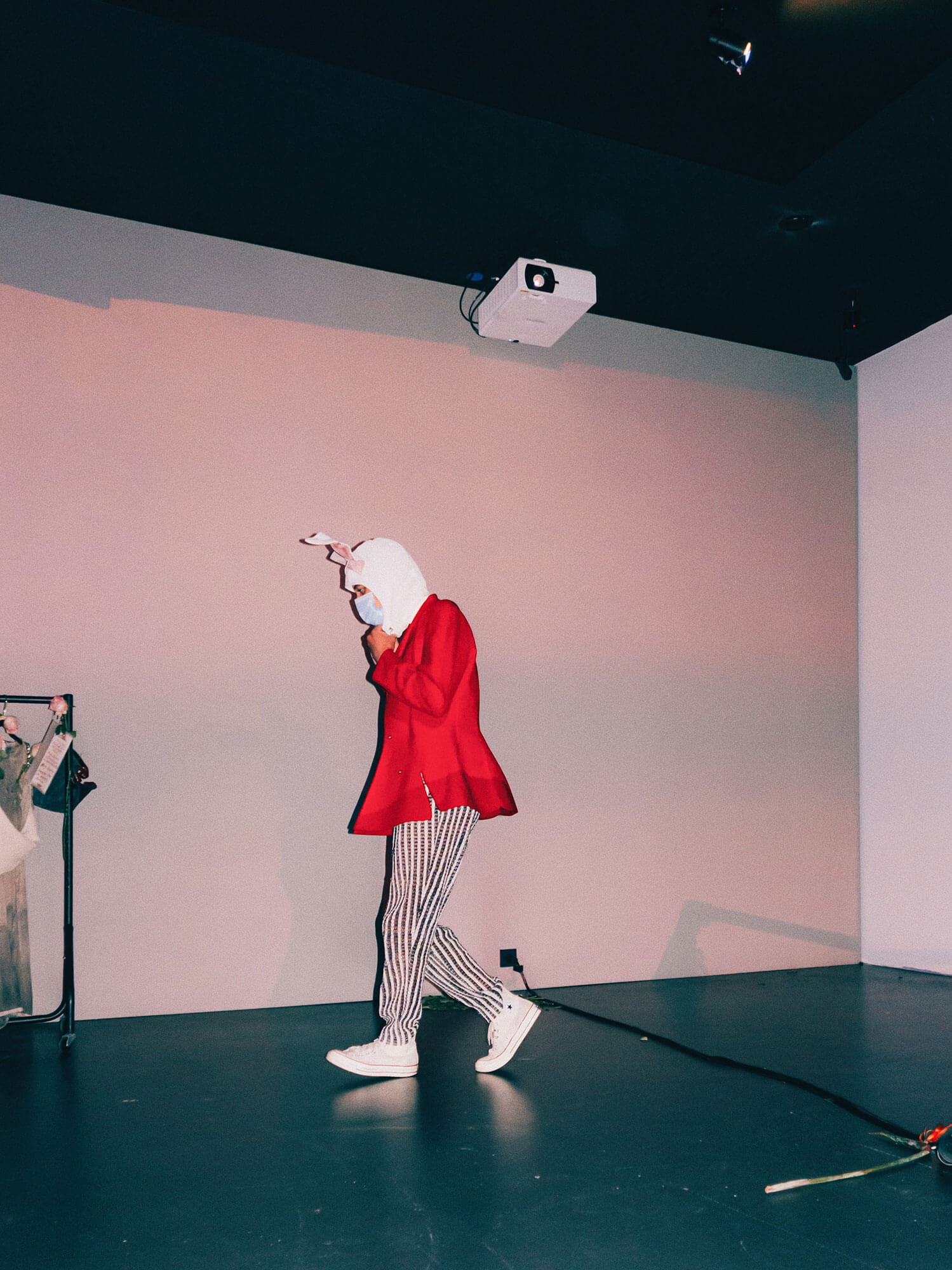 Could you tell us a little bit about how you created the garments?
Rachel: Every garment from the collection is conceived mostly from reclaimed deadstock curtain textiles sourced from my special fabric collection. Some accents were thrifted. I hand stained each fabric, finding that mistakes are mistakes and that I could not dwell on them – embracing mistakes and allowing them to flow through the process. As time flows while creating, I entered a trance where the only thing that is true is that very moment.

A lot of my emotion comes from sound, and maybe that’s why Tony and I are connected. He is the sound I’ve always needed! This is the first collection I’ve made with my soul feeling free and completely mine – with someone in mind who believes in me. Manifesting, connecting to myself, connecting to nature and visiting the in between world throughout my process. I’m on this journey of finding myself and grounding, and I think that this collection became about expression and figuring out who and what I am because I haven’t taken time on that path until right now.

Did you explore any new territory in the process?
Rachel: Garments that take on this style are really a new form of art, a rebirth – letting my mind go free and letting it do what it wants to do, instead of thinking about what it should be doing. Not thinking about the outcome, but simply enjoying the very moment of what I am doing during the creation process. You know, that’s where your true style really comes out – when you let your mind run free instead of forcing something upon it. And suddenly I finish and it’s a piece of art that I feel deeply connected to, that my soul is inside, and my energy is radiating off the garment. I’ve never felt so creative. I feel like I’m really expressing what’s within me and releasing energy stuck inside of my body onto the garments. My physical mental pain, my pure light, my character.

Lately I’ve been going into an elf swamp fantasy world in my lorika egg to feel happy and safe, and I put it up everyday to protect my energy from leaking out or being taken. It has really shone through onto this collection. I would go to a fantasy world and see an elf sharing energy with a tree or sitting in a flower wearing one of these garments. I really let my energy speak – I did what it told me. I asked it for help when I needed it. My compassionate beam of light was there when I needed an opinion. Light always tells you the right answers. I feel nothing. Don’t take my energy. Wearing these garments you are protected, shielded from the energy vampires of the world. You are powerful and pure. Four corners connect and fill with light. You float.

A lot of my emotion comes from sound and maybe that’s why Tony and I are connected. 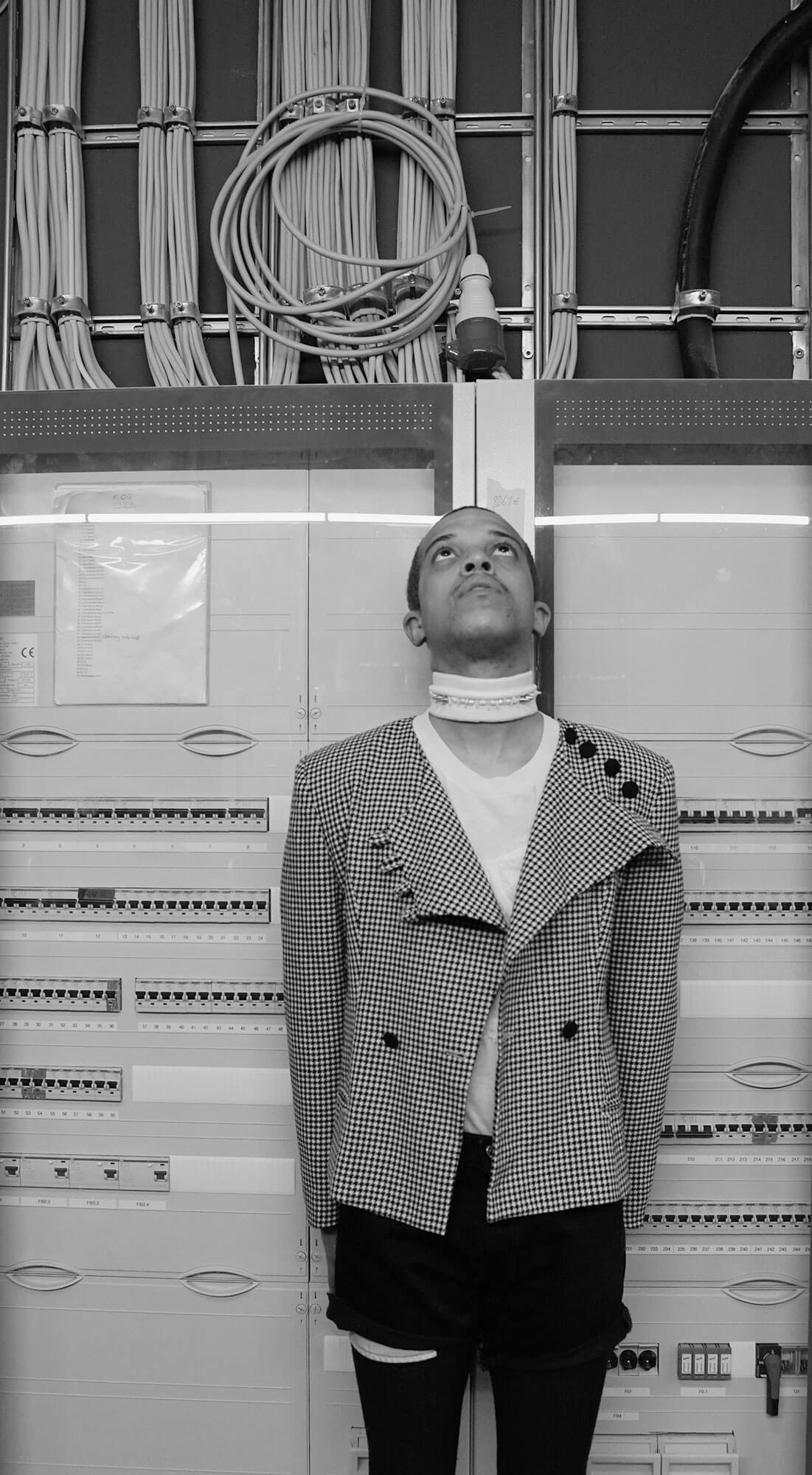 Tony, why did you specifically decide to use BLE technology in this work?
Tony: I decided to employ the BLE beacons to sonify our models, simply because of their persistence. Beacons don’t store data, they just send out their unique ID (for years). My hardware acts as a gateway, receiving the relative position of the beacons attached to the models in a closed space. This persistence drives a generative patch that musically expresses an interpretation of this data. This is the homage I can pay to a perfect collection – there is something poetic in an increasingly obsolete media whose signal is easily diffused and wildly inaccurate at values greater than two meters. Sound familiar? Still, discussing my vision with Andrew Melchior (CTO, Massive Attack) thinking I’m doing something new, he casually recants how he and Björk leveraged this technology in an installation like five years ago. Fuck me, right?  I think they were actually able to make something out of it. My aim is to make nothing.

Yet there’s still something to be said about a technology that has become so ubiquitous without even necessarily requiring you to be online. BLE works independent of an internet connection. Beacons can detect any smartphone within their range and push notifications to it if an associated app exists on the phone. In some instances, this could be an app as fundamental as Weather or Maps. Sephora uses them to send discounts to your smartphone when you walk in the store. Trump used them to collect unique identifiers (MAIDs) of his supporters’ smartphones to recognize the interests of users and send them to third-party apps or vendors (and still lost). Nagoya University Hospital in Japan uses them to monitor the indoor positions of employees and railways in India employ the technology to encourage you to use to their ‘free’ WIFI. What the fuck is actually ‘free’ nowadays, independent of at least some transaction? Some metadata to be stored by God knows who for God knows what? Hence my fascination with each reconnaissance of these dystopian, innocently-presenting chips.

Ok, last question – why did you decide to use sex dolls in the work?
Tony: Instead of answering that question I’ll share a recent experience, because the truth is that I don’t know how the idea reached me. As I was purchasing the six dolls (two black, two white, one Japanese, one overweight) I hit it off with the owner of a Neukölln sex shop. He introduced me to the 1930’s surrealist German artist Hans Bellmer who, in isolation, constructed and photographed a series of dolls in the forests outside of Berlin. His bizarre, contorted, meat-like pieces opposed the fascism of the Nazi Party, the cult of the perfect body then prominent in Germany, and the severe paternal authority exercised by an abusive father. The parallels in our work are best left unsaid, but he was forced to flee the country after being deemed ‘degenerate’.

I decided to employ the BLE beacons to sonify our models simply because of their persistence. 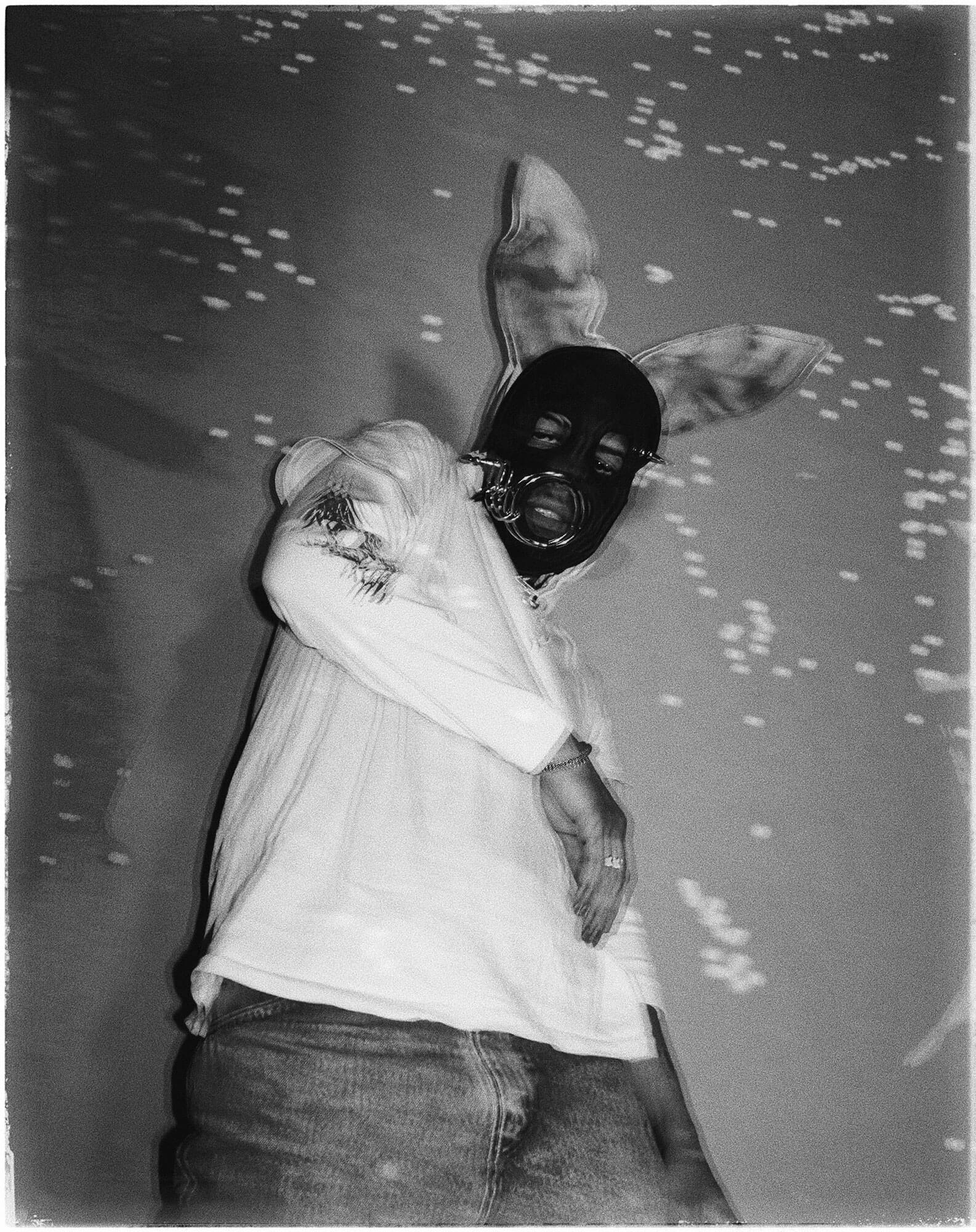 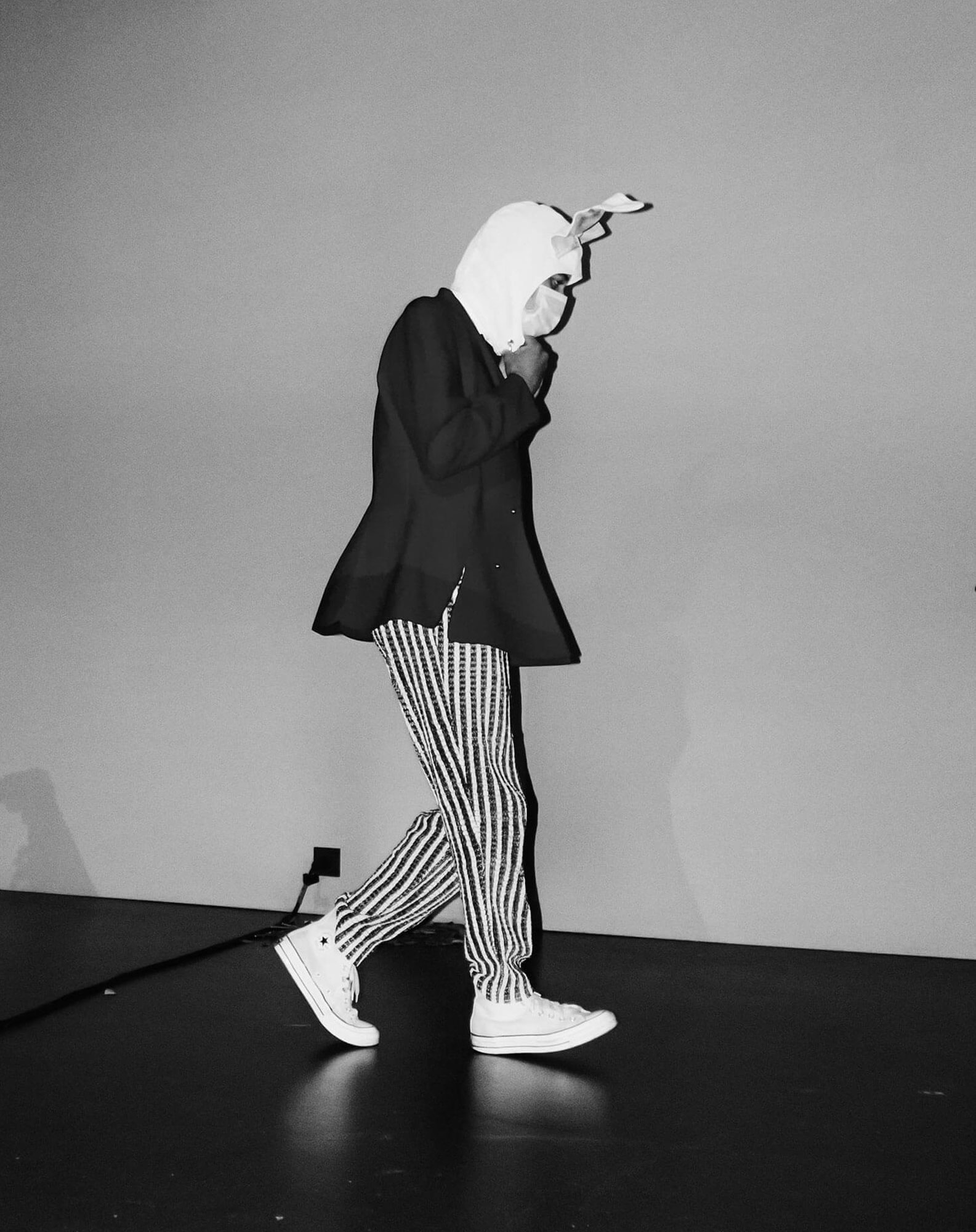 This feature was produced in collaboration with Factory Berlin.

Factory Berlin is an ecosystem of over 3,500 members from more than 70 nations located on two campuses. Gathering the most ambitious creators from the tech, creative, and corporate industries, they curate their diverse community to connect, collaborate and thrive together. As a platform for active networking, their digital products, spaces, startup labs, events, and programs encourage new connections to impact our surroundings and world. Factory Berlin is supported by partners like Riverside Studios Berlin, Sonar+D, Google for Startups, CODE University, Beats by Dr. Dre and World Frontiers Forum.