Orange is the Warmest Colour 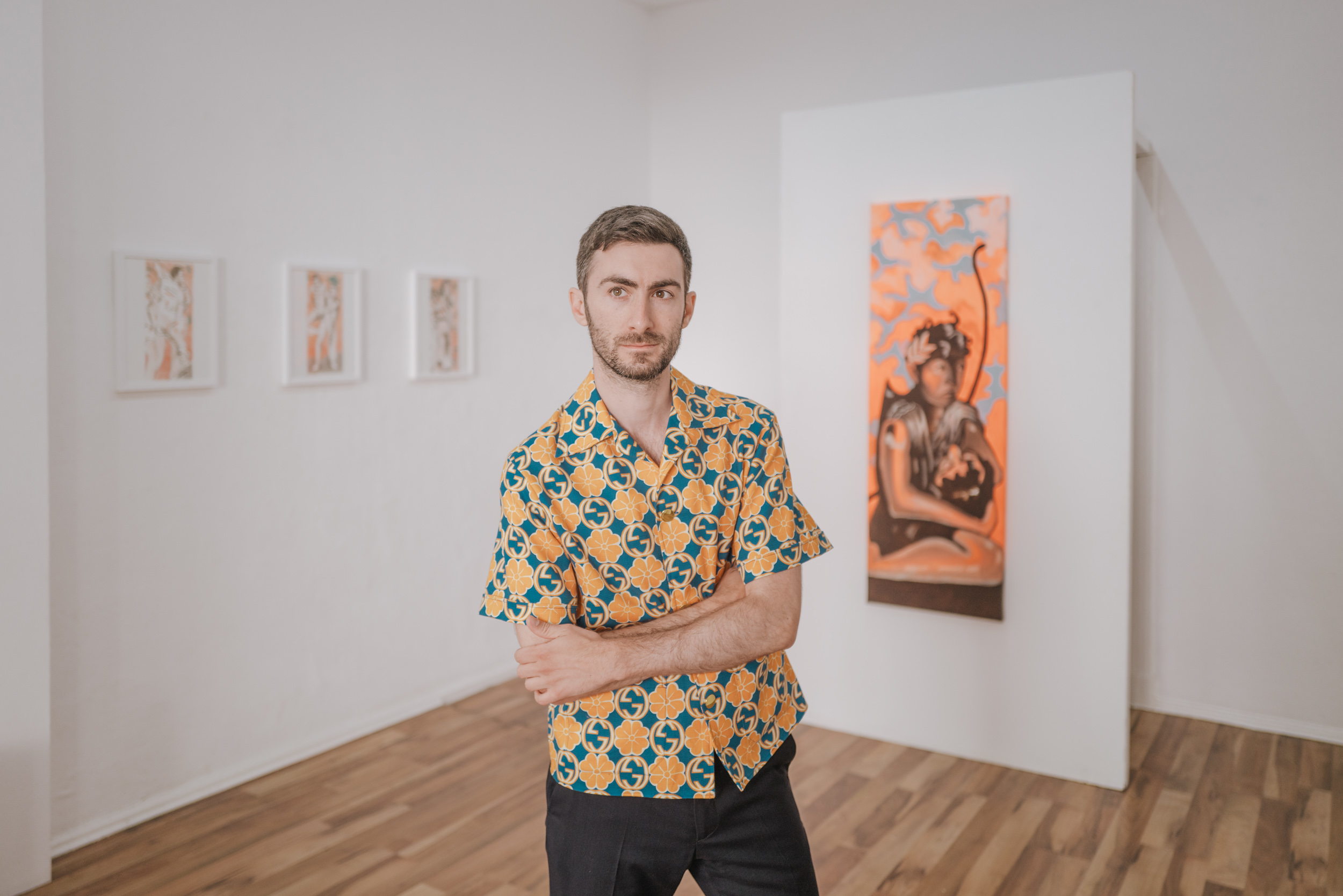 A Lebanese family walks by Neukölln’s Retramp Gallery, which is hosting New York-born artist Spencer Chalk Levy’s debut solo exhibition in Berlin. A little girl glances at her mother at the gallery window. “They’re all the same colour; so orange!” she says in Arabic. The rest of the family slow down a beat and marvel starry eyed at glowing royal orange canvasses, embedded on calm white gallery walls. The smiling family then saunter off.

The 35-year-old artist’s latest work, Orange Nights, is marked by its intense amber colour palette and is inspired by deep, long summer sunsets in cities like Berlin – where he lived before relocating to Vienna. From Argonauts to modern-day footballers, Spencer interweaves together many different cultures – ancient and contemporary – to find his own winking, playful visual language. Drawing from decorative arts like art nouveau and baroque styles, his work maintains an air of luxe while tilting between the classical and the hysterical. In one painting (called Orange Card), Greek soccer players are depicted engaged in a homoerotic wrestle. In a woven tapestry, two sphinxes are lying side-by-side, one holds a cigarette in her hand, a small plume of smoke rising above her; daring unwitting spectators to step in. It’s inspired by Spencer’s two-year stint at a high-end Berlin brothel where he worked as a barman.

LOLA met with the artist to find out more about what inspires him, why he decided to become an artist, the influence Berlin has had on his work, and more. 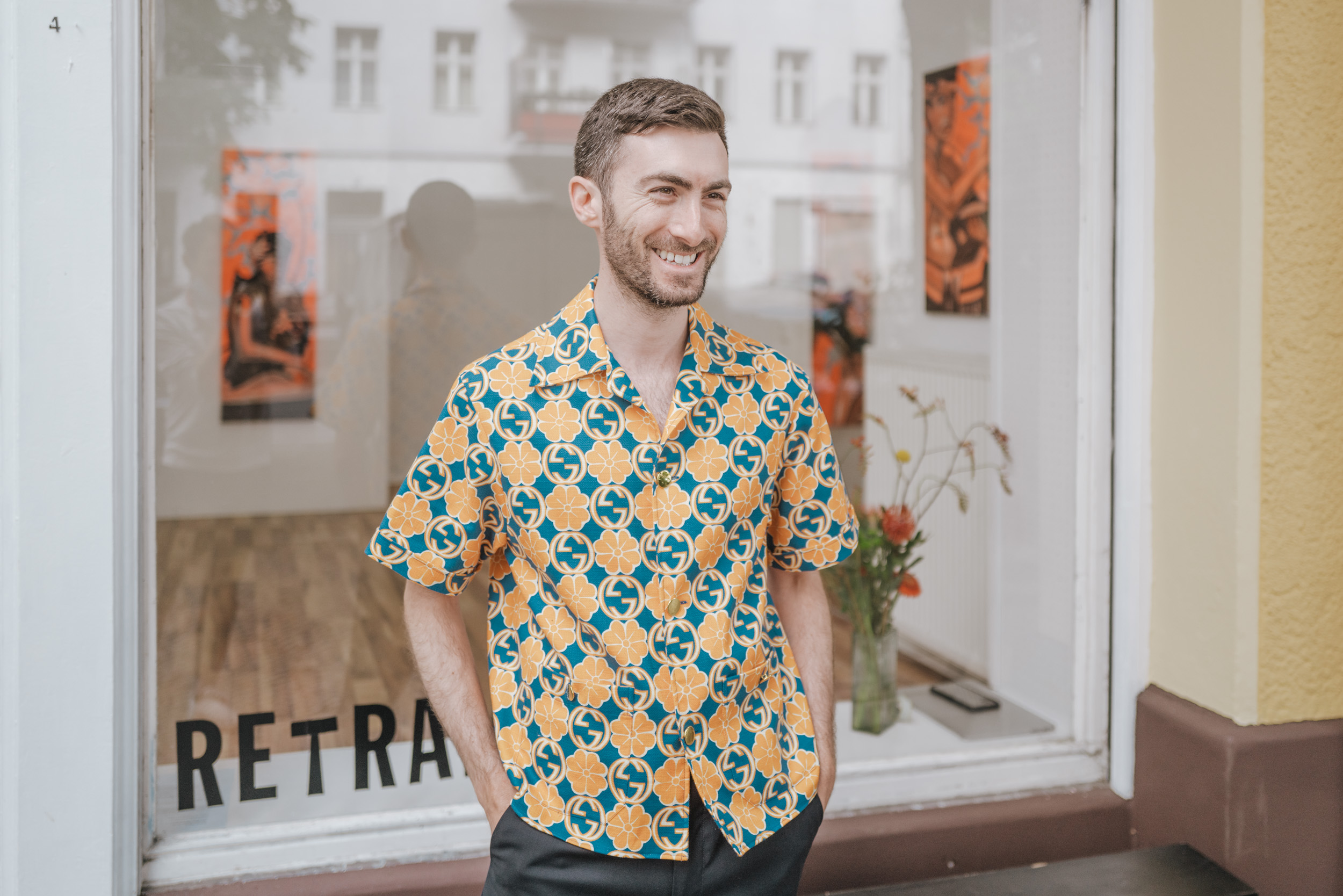 Your new work is very orange – how did it come about?
The backgrounds of the big paintings have this kind of deep summer orange sky because I feel like it’s very beautiful, but also somehow foreboding. It almost looks slightly…. I want to stay away from the word ‘apocalyptic’ because I think that there is no such thing as the apocalypse. There’s always something that’s going to come after. But as humans that live 80 years, we don’t understand that for 12,000 years there’s been civilization and culture. There have been wars that go on for 400 years. We can’t understand it. And so this show was a mix between me going through a new phase in my life and not knowing what’s next with sunsets coming. With what’s going on politically in our world, there’s this really slow, beautiful but also very intense ending of a lot of things.

Your work is very diverse in terms of materials, which mediums do you work in?
Everything starts in my sketchbook and that’s just paper. I like to use the cheapest of pens to make my work – especially my first drawings – but when it comes to painting, I only use acrylic. It was a decision I made in I think my second year of art school and I just stayed with it because I really know how to manipulate it. I also make digitally woven tapestries where I make the drawings and I have a firm that weaves them for me – kind of like a 3D printer.

Why did you decide to become an artist?
I think I was always an artist from a very young age. My dad used to give me sheets of that old computer paper with the holes on the two sides that you have to rip off. I would just sit in front of the TV and draw all day. I only ever wanted to be a psychiatrist, an artist or a fashion designer, and I think somehow I’m kind of all three. The one place where I make all the rules and all the decisions and I’m free is in painting art. For me, painting is a mix between solving a math problem and ice-skating. It’s like this beautiful mix of making decisions and solving problems, but also you need to have a beautiful line like a dancer or an ice skater. 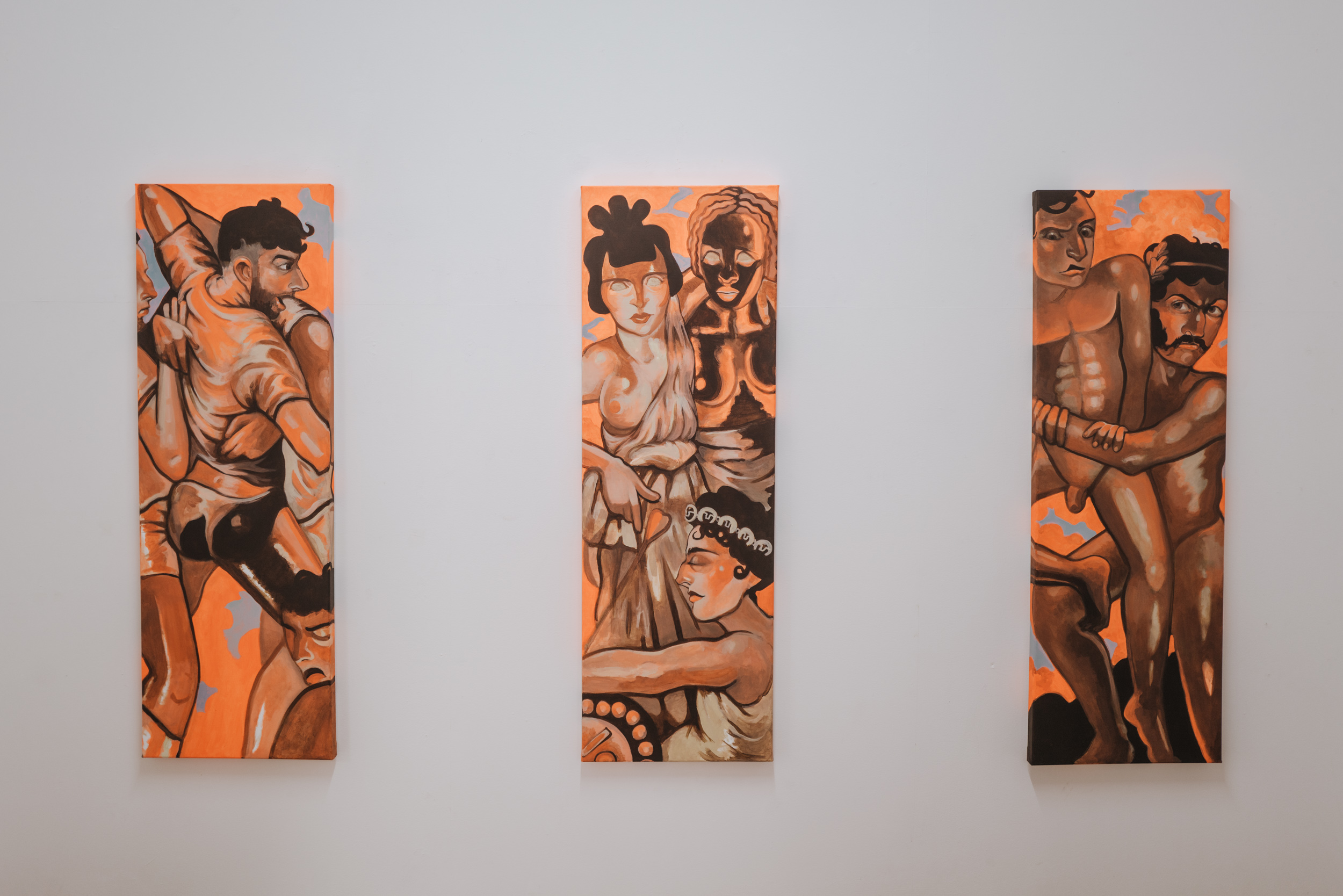 I only ever wanted to be a psychiatrist, an artist or a fashion designer, and I think somehow I'm kind of all three. 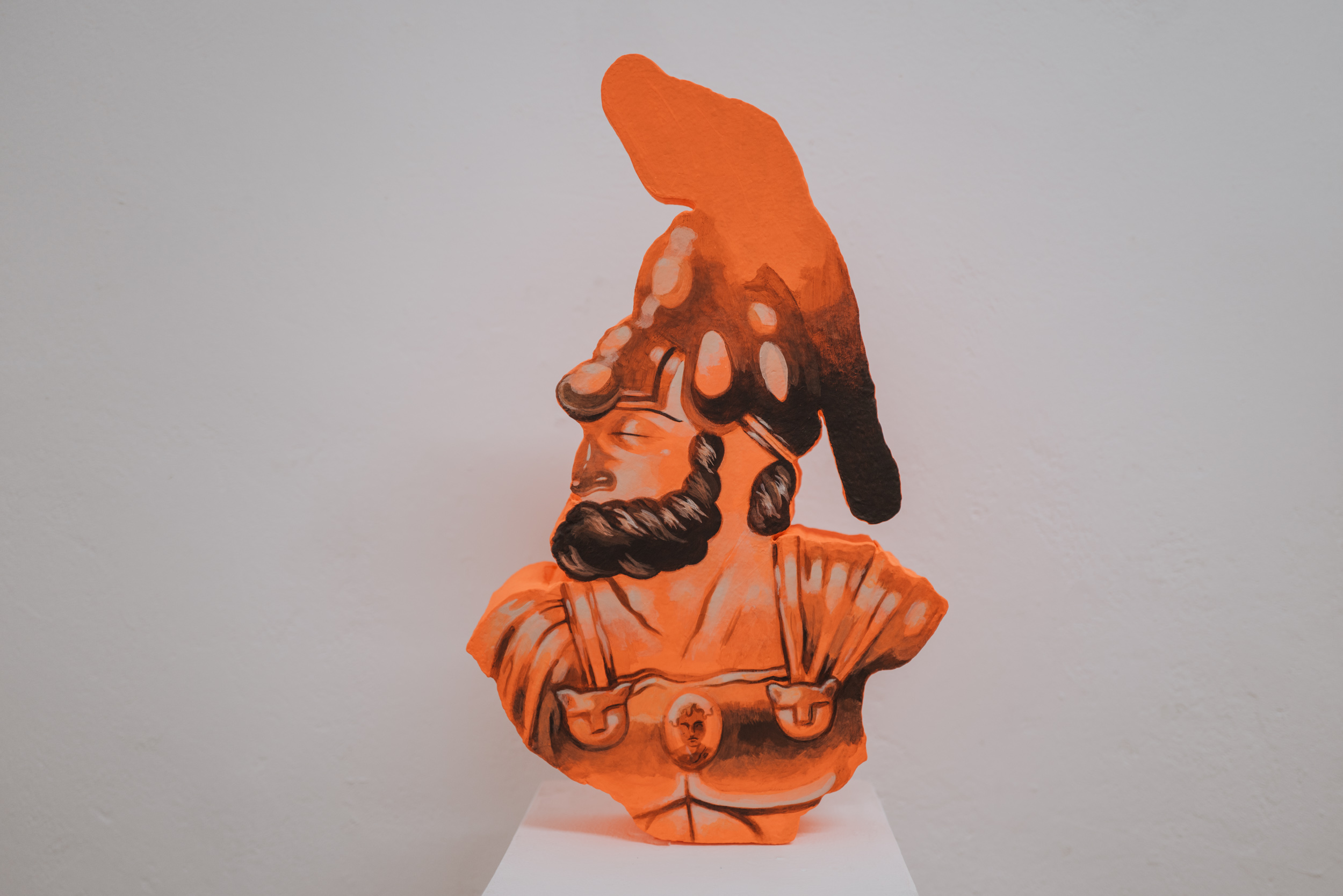 How did living in Berlin influence your work?
When I think of Berlin, I always say it’s two things: the city of broken hearts and the city of lost children. I have family and close friends here, so I’m always back. When I was in Berlin I worked in a high-end Brothel in Mitte, I was a bartender/room service/liaison guy. It was a champagne bar and had rooms above. Some of the champagne cost €3000! The work wasn’t really bartending, because I wasn’t good at that. It was about dealing with 40 different personalities at a time. It was a very sensitive situation because some women were doing it out of their own volition and some maybe not.  What I love in this kind of profession is whether it’s the 1800s or 1500s, it’s the beauty standards of the day turned up to an 11. From behind this bar, I’d find my inspiration in watching the dynamics play out. I love to tell a story and make people a little bit curious. That’s why only very rarely will I have a subject looking directly at the viewer. They’re usually people looking off into the distance, because I want the viewer to be like, “what’s happening over there?”.

Who are your inspirations?
I really love Gustav Klimt and the Austrian Painter Egon Schiele, but I also really, really love the French painter Henri de Toulouse-Lautrec – he even lived at a brothel for a long time. He also drew – similarly to me – the prostitutes that he was around in their down-time moments. I liked that there wasn’t this kind of predatory male gaze upon the women there. They weren’t gussied up, they weren’t waiting. It wasn’t a man trying to paint a sexual image of a woman; it was people that are sleeping or tired, or, like in my pieces, they’re kind of sad and on drugs and smoking cigarettes. They’re not there to impress anybody.

Your work feels both ancient and modern at the same time, is that intentional?
Yes, one painting could be people in Berlin on the canal renting a floating raft, or I have those big paintings of Greek soccer players, based on actual photographs of real soccer players from two years ago. So all of these stories, somehow, even if they’re forgotten, by painting them, they become eternal. They could be from 100, 500 or 2000 years ago. They could have been originally painted on a vessel for drinking. 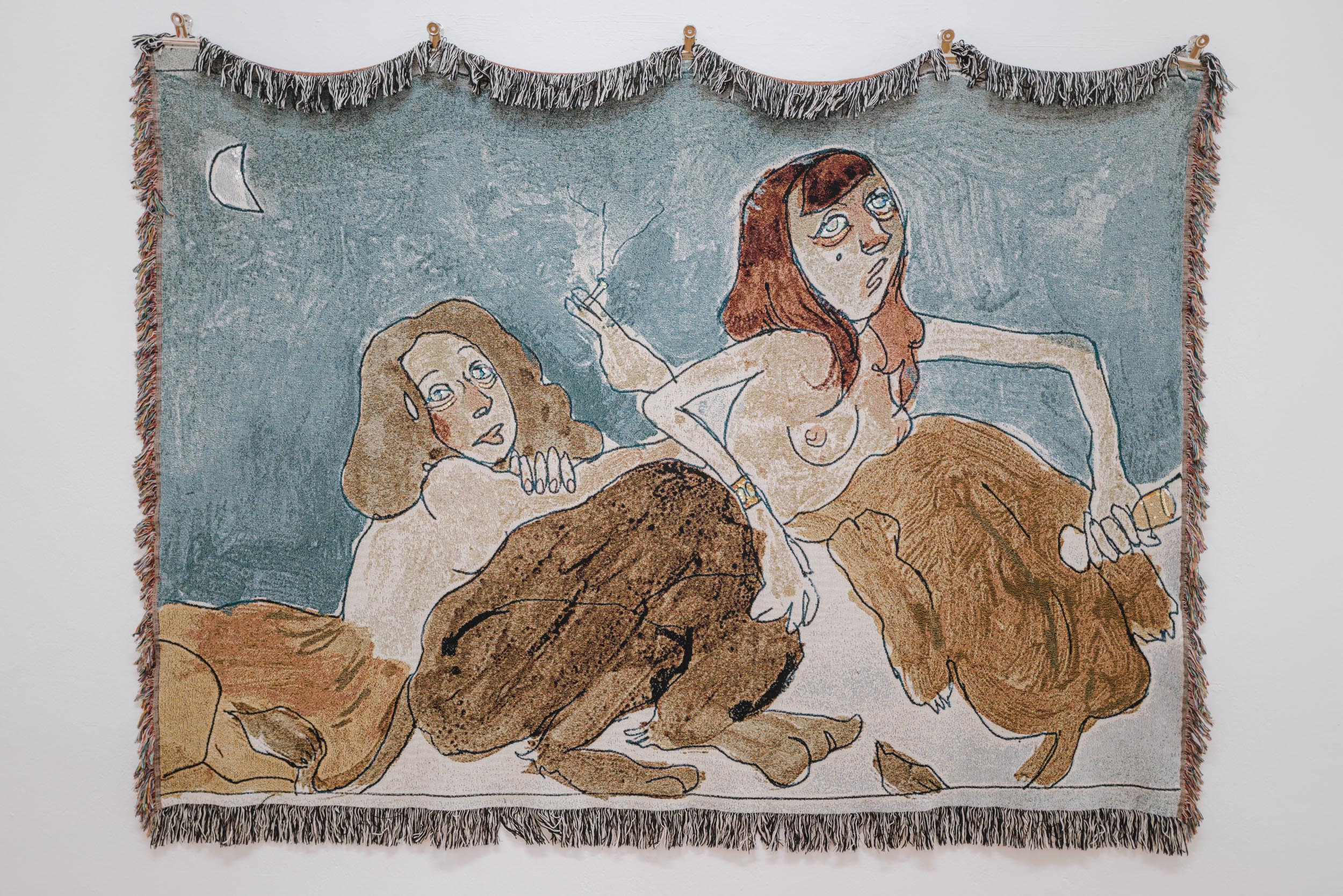 The one place where I make all the rules and all the decisions and I'm free is in painting art. 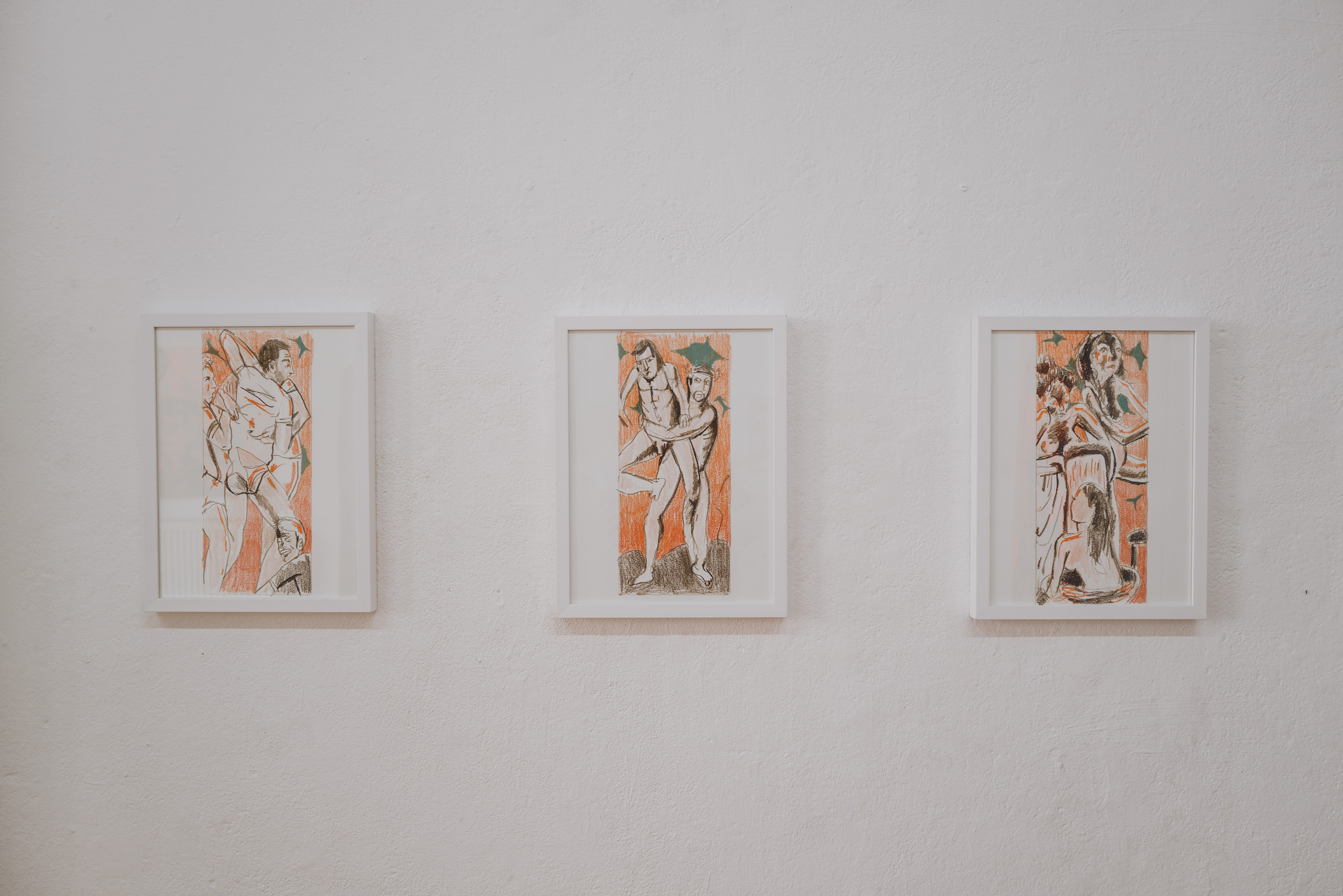 Your work leans heavily on ancient civilisations, why?
I love to do research; I think I’m an amateur anthropologist. Part of the reason why I lean so much on decorative arts language, as I would call it, is because they can be any time period, even now. I realised that you know, especially moving to Austria, that so many people have a long family history. As the grandchild of Jewish immigrants to America, as soon as you go to America, especially in New York, you become a New Yorker and you forget the past. So it’s me kind of trying to make my own narratives and histories, reconnecting. Creating something new by tipping my hat to other cultures and then kind of slipping it on to fit me.

What do you have coming up in the future?
I have some cool things going on that I can’t talk about, but the next time you’ll probably see me is when I’m collaborating with Vienna art week for open studio days, and so my studio in Vienna will be open. It’s really interesting for me because I like to think of this as kind of a cabinet of curiosities. Your studio is really just like a sketchbook, but bigger!

ORANGE NIGHTS by Spencer Chalk-Levy will run at the Retramp Gallery until July 25 2021, 15:00 – 19:00 and is viewable by appointment, and don’t forget to follow Spencer and Retramp on Instagram. 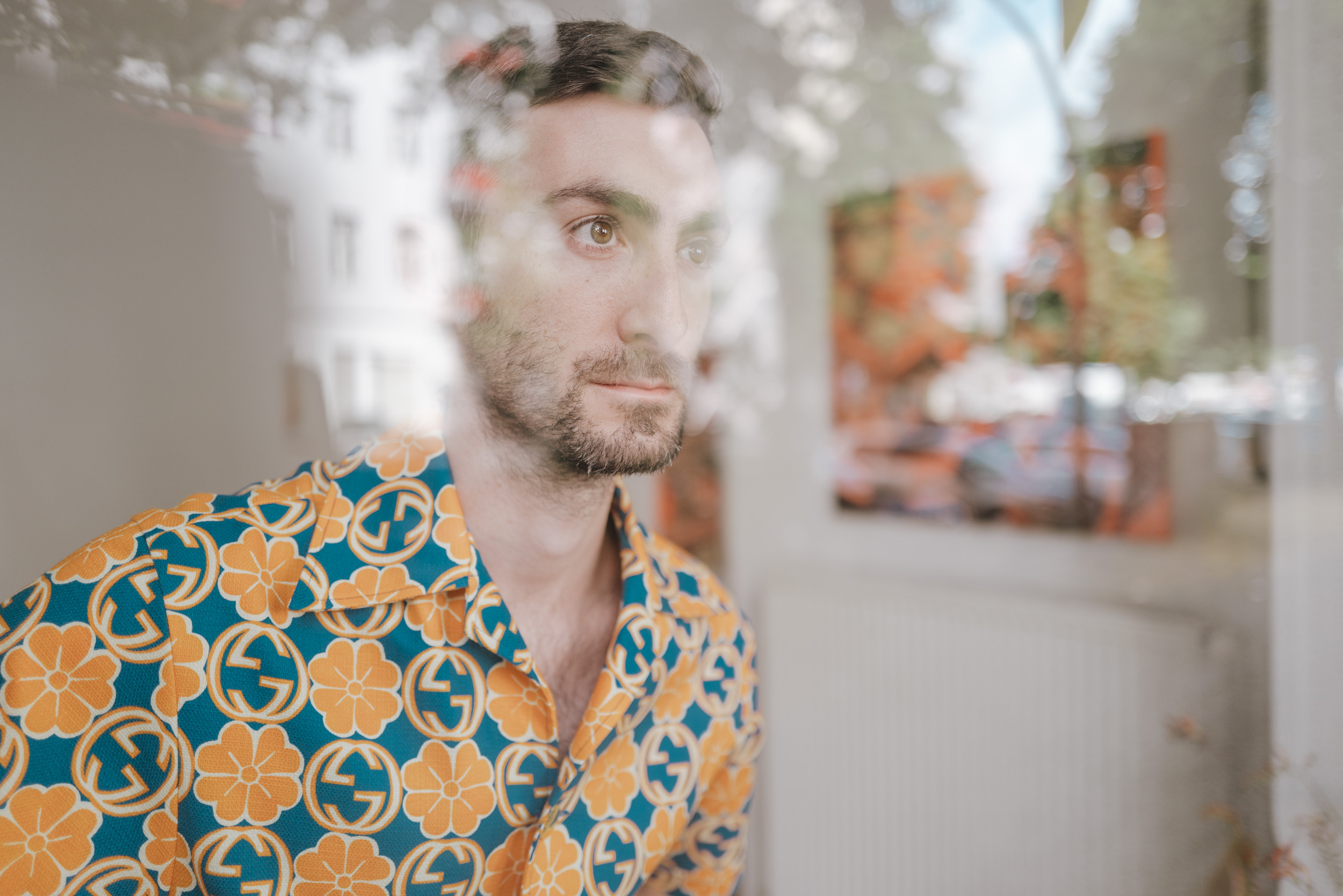