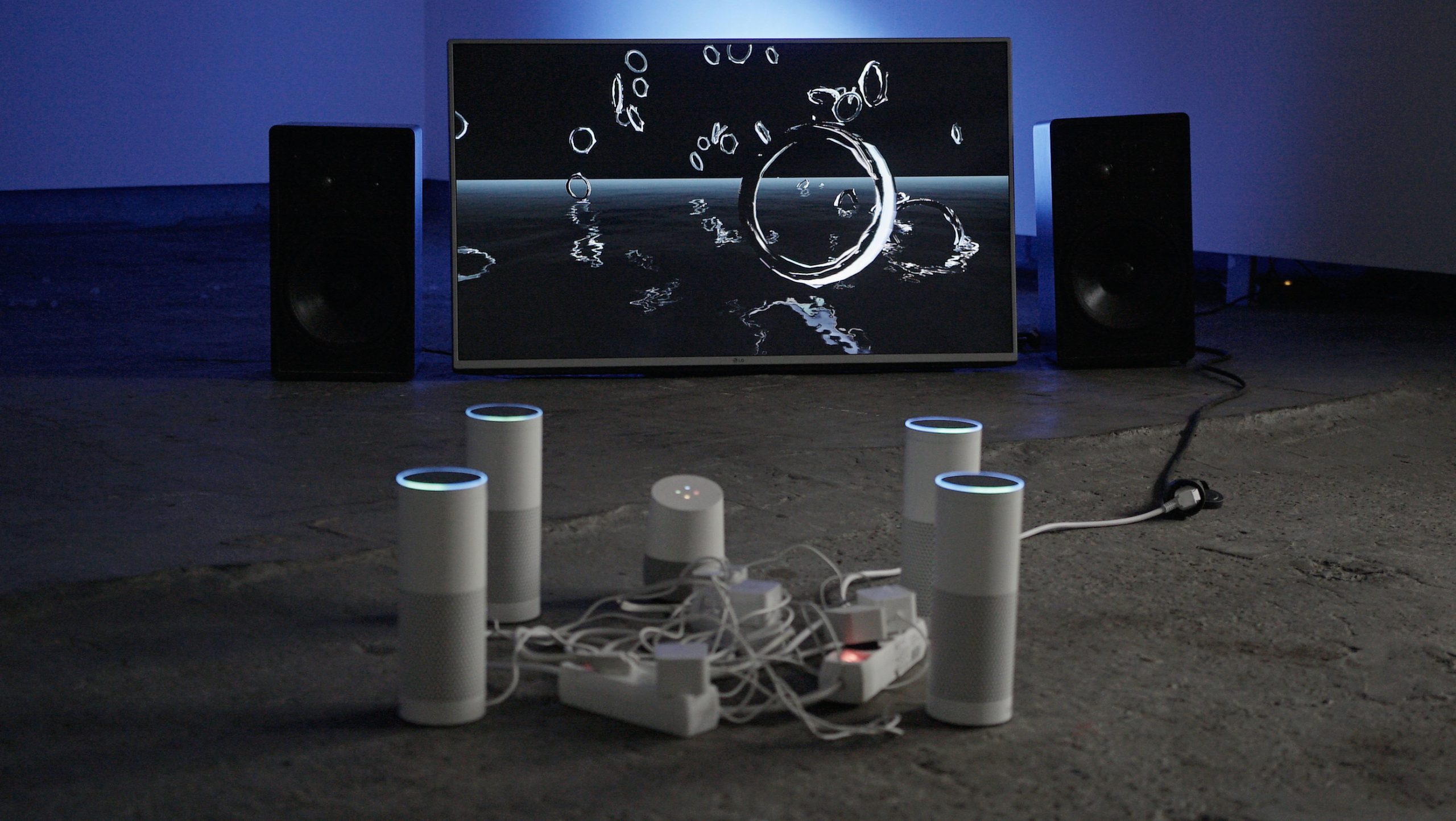 The net art scene forms a vast, modular, and visually intertwined web of artists, where Berlin stands out as more than just a highly influential node. The city has played a seminal role in defining the artistic genre, from early hackers in the 1990s and the rise of rave culture, the dotcom boom in the 2000s, to today.

As our global culture hurtles ever faster towards all-consuming digitalisation, Berlin’s net artists continue the tradition of questioning, connecting, and disrupting the systems of the modern world.

The Twitter account @mothgenerator tweets images of moths composed with JavaScript. Any Twitter user can reply to the account and have a unique moth generated based on the letters of their name. Switch a few letters in the name, and the bot will create a wholly new and original moth.

What distinguishes this account, and other bots like it, from the rest of the Twitter-verse is that it leverages an inherent quality of Twitter to generate pieces of art. The social media site is both the medium and the work. Some would include this when presenting examples of net art, but summing up the net art movement in 140 characters is indeed a poetic task in itself.

Net art is a movement in which artists use the internet as their medium, and it has spawned numerous term wars with artists claiming territory in “net.art”, “net art”, “post-internet art”, “new aesthetic”, and new media practices. Contemporary definitions extend to any art, physical or digital, that mimics the characteristics of internet technologies. 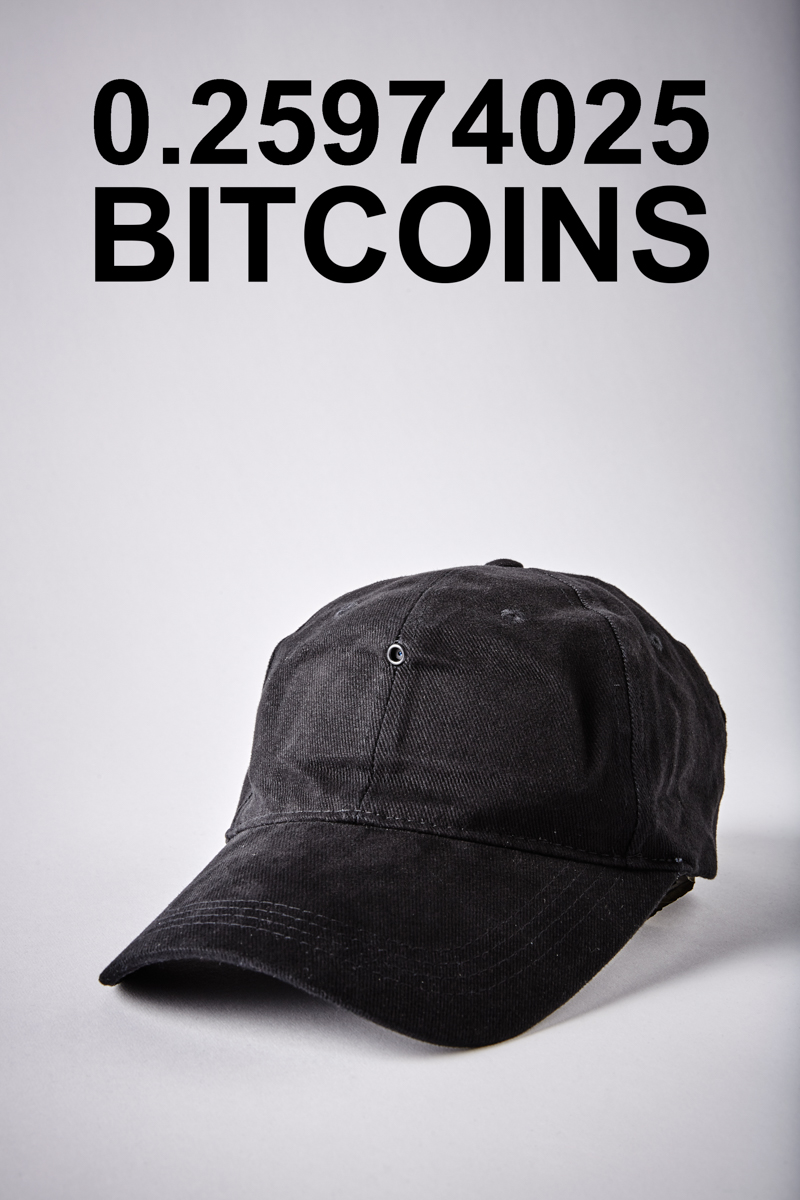 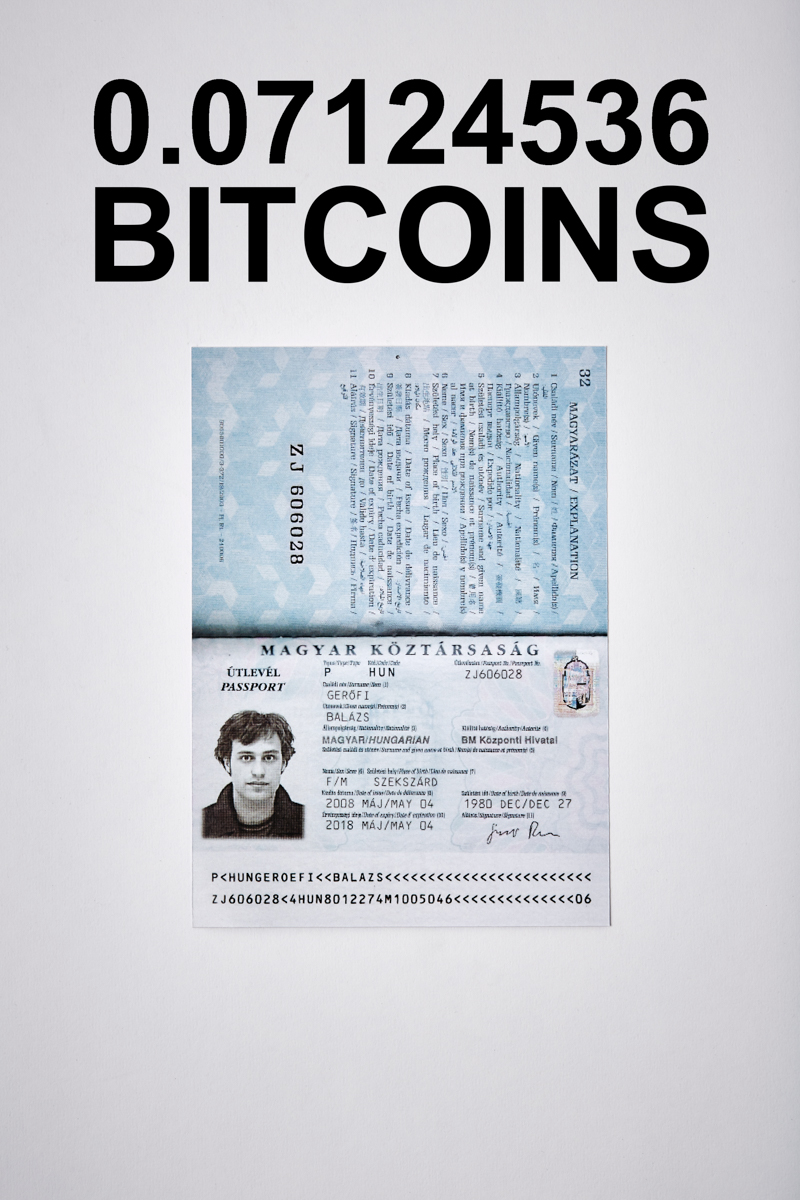 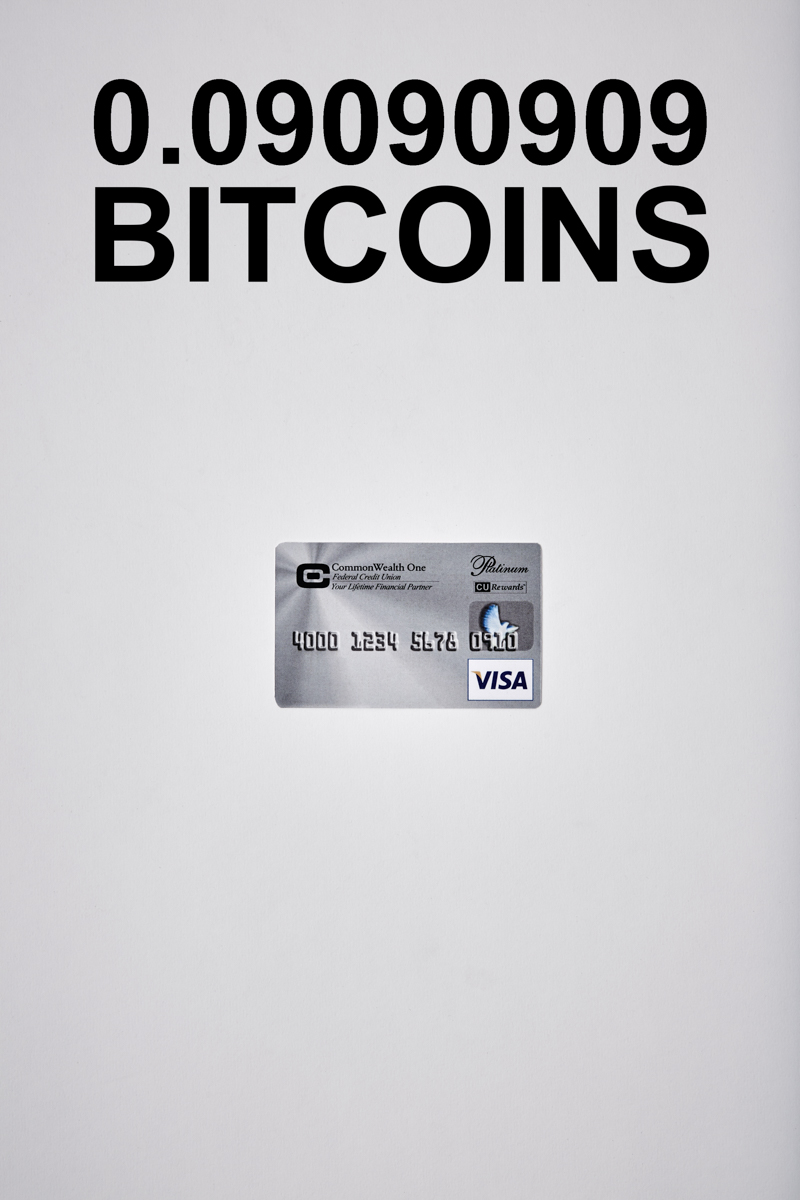 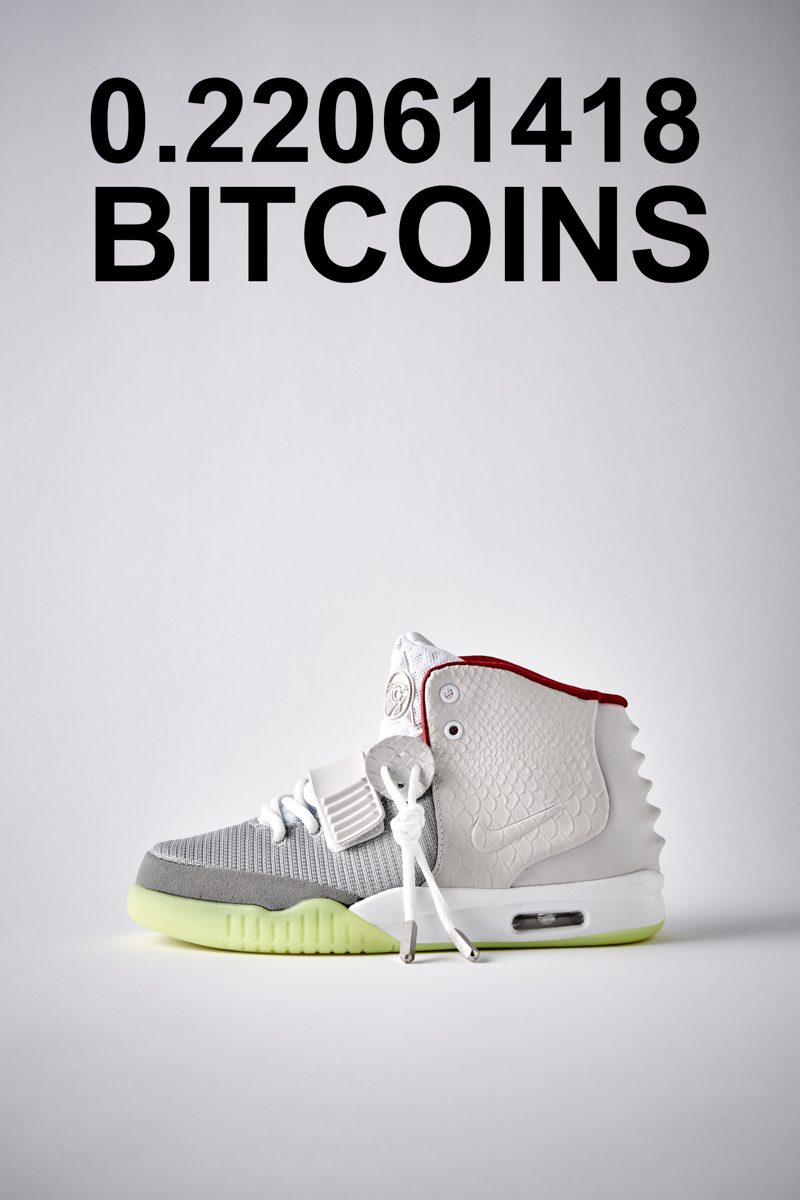 In many ways, our work is rarely within our control. Anything could happen.

Berlin-based net art historian Robert Sakrowski, founder of the panke.gallery near Mitte, pointed out to LOLA that commentators have traced the roots of net art all the way back to Dadaism in the early 20th century. It was a time of rising modernity, nationalism, corrupt politics, and new technologies that brought with them a cold veneer of rationality about how the world should operate, spawning an art movement that sought to disrupt these systems with absurdity. Like today, not everyone was keen on the new aesthetic of global capitalist rationality. In the words of Dadaist poet Tristan Tzara, “the beginnings of Dada were not the beginnings of art, but of disgust.”

Sakrowski points out that central figures of the Dadaist movement, such as Tzara, Marcel Duchamp, and Hugo Ball, had much in common with the current aesthetics of net art. “The use of recycling and collage from this period has influenced similar techniques today,” says Sakrowski. “One could even consider sending physical letters in the post as a sort of net art, as it leverages a networked system.”

As the Dadaist movement flourished at the end of WWI, net art was similarly ensconced in sentiments of creative beginnings following the fall of the Berlin wall in 1989. Citizens of both eras expressed their liberation in new artistic styles. Dada’s progeny, the Surrealists, continued the fight against a rational vision of the world via dreamy and absurd landscapes. The fall of the Berlin wall and the spread of rave culture from Great Britain meant that boundary-breaking technologies like the internet were welcomed with open arms in the art world as well. In fact, dancing and technology were often found within close proximity. Sakrowski describes a scene at a club in 1994 in which several ravers were huddled around a series of computer terminals, typing away. “I walked over to see what they were doing and was initially disgusted,” he says. “‘We’re at a club,’ I thought, ‘why aren’t you dancing?’”

It turns out that these computers were connected to machines at other clubs in the city: Sakrowski was witnessing partygoers messaging one another via interlinked VT100 terminals to ask how the party was on the other side. The project, called Clubnetz, connected Tresor, E-Werk, and Friseur, and was later turned into an app and put on display at Sakrowski’s gallery in 2018. Between Duchamp’s urinal repost in 1917 and the rise of FOMO in 1994, the Fluxus movement of the 1960s and 70s is another influence on modern net art. Fluxus focused more on the process of artistic performance rather than the end result. An aesthetic of motion, spontaneity, and an active relationship between the consumer and producer are key identifiers of the genre. 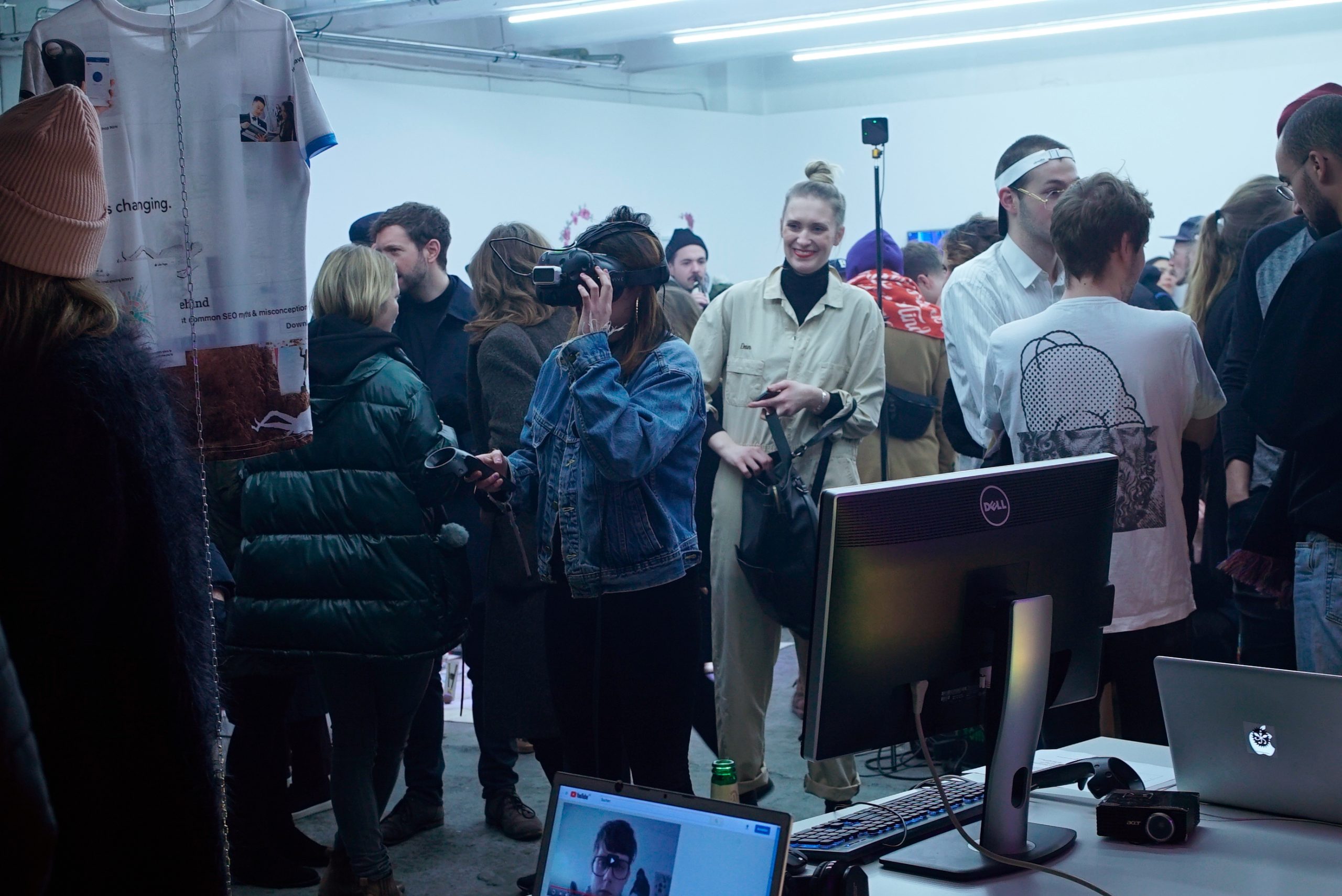 !Mediengruppe Bitnik is a tandem art collective working with, on, and around the internet to dig into contemporary issues. In early 2013, the duo sent a camera to Julian Assange at the Ecuadorian embassy in London. Not long after, they let loose a bot holding a Bitcoin wallet to make purchases on the Darknet. The bot, later named Randy by followers of the experiment, was given a small allowance of $100 in Bitcoin. The purchases, which included ecstasy, cigarettes, and Viagra-like knockoffs, were then sent to the Horatio Jr. gallery in South East London for display. In 2018, at panke.gallery, the group also exhibited ALEXIETY, which addressed concerns surrounding data privacy, surveillance, and the use of digital assistants such as Amazon’s Alexa. It was also thanks to Sakrowski that !Mediengruppe Bitnik and another Berlin-based collective, Omsk Social Club, collaborated on a project called Cryptorave.

Before the night of the rave, participants were tasked with mining cryptocurrencies on their personal computers in exchange for a ticket to the party. For the uninitiated, exchanging computing power for monetary value is the essential premise behind mining for cryptocurrencies. Instead of buying a ticket with cash, Cryptoravers paid by running an algorithm on their computer for a specific time. This mechanism, among a few others, has led artistic groups to experiment with alternative ways to fund their projects. The Cryptorave tickets also provided ravers with an identity for the night in what can best be understood as a crypto-based live-action role-playing game. The character descriptions were replete with likes, dislikes, dreams, ambitions, and even tasks to guide them through the event.

So, while not strictly confined to the internet, !Mediengruppe Bitnik is working with the ancillary theme of networks. The camera sent to Assange, for instance, recorded the entire journey through the postal service. Similarly, the Random Darknet Shopper crawled the uncharted depths of the internet to execute its arbitrary purchases and produce artifacts of its journey. And Cryptoravers, with their mined tickets and identities, participate in a shared physical raving experience mediated by their digital participation. Each project merges the digital and physical to reach its ends. 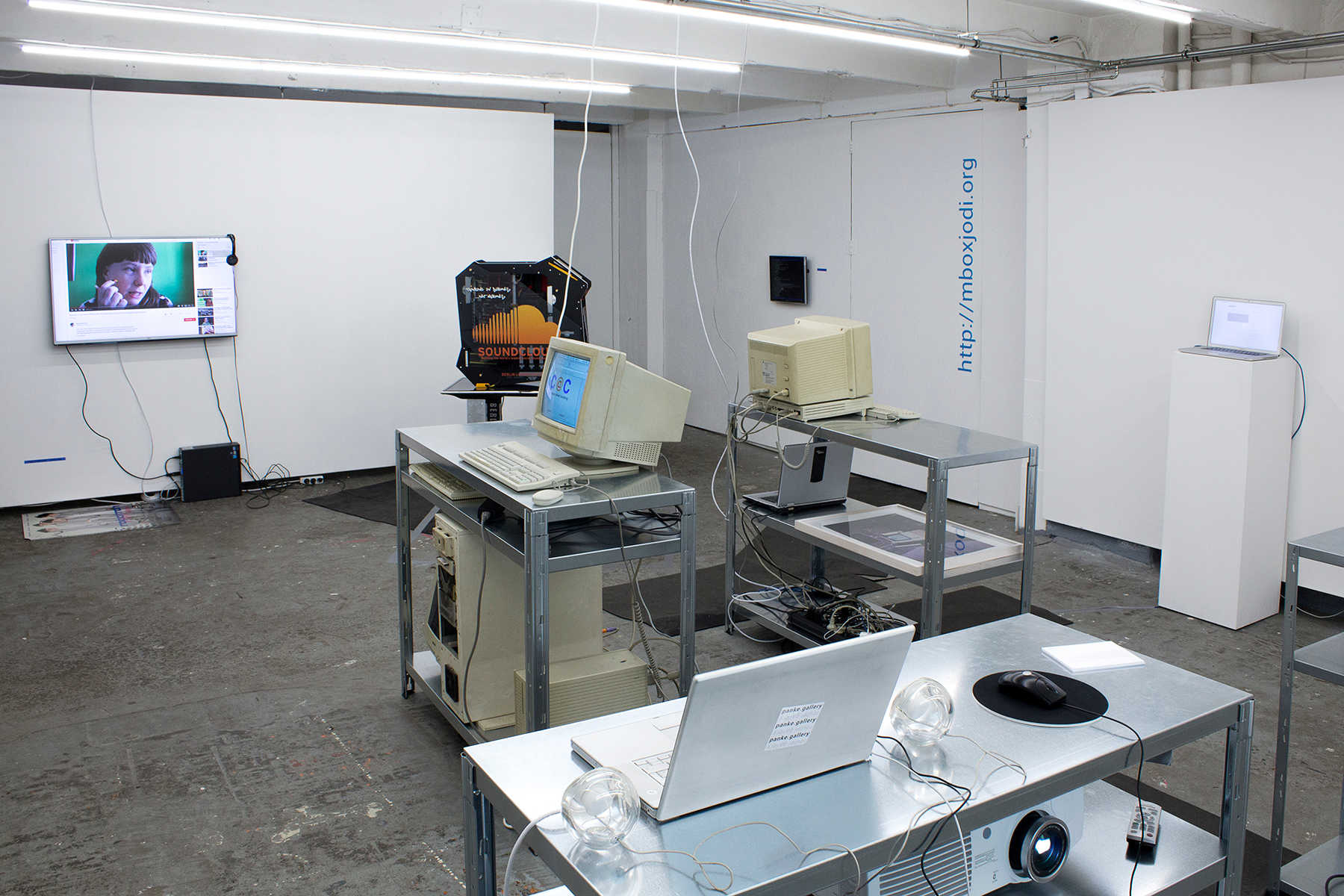 !Mediengruppe Bitnik also mentioned its preference in highlighting the artistic process rather than a finished product. “We were very inspired by the performative aspects of Fluxus rather than simply the creation of objects,” they explain. “In many ways, our work is rarely within our control. Anything could happen.”

An early touchpoint for the collective was Ben Vautier’s The Postman’s Choice from 1965. In it, Vautier glued together two postcards with the addresses facing out. On one side, he wrote one address, and on the other, a completely different address. “In Vautier’s work, the postman becomes a part of the work in that they must choose where the postcard goes rather than Vautier,” !Mediengruppe Bitnik explains.

This aesthetic, prioritizing the artistic process over its outcome, has been embraced by many artists experimenting with the internet. Early contemporaries of !Mediengruppe Bitnik include etoy, who critiqued the rampant capitalism of the dotcom bubble. In 1999, etoy entered into a legal battle with an internet-based toy retailer called etoys.com. The latter claimed that the art collective was responsible for customer dilution and eventually sued the group for trademark infringement.

After having their site taken down, etoy retaliated via denial of service attacks on etoys.com and a strategic media campaign. The conflict was later coined the “TOYWAR.” Eventually, the online business dropped the legal charges, and etoy relaunched their site. In the process, etoy recruited 1,798 artists, journalists, lawyers, and celebrities which made up “the most expensive performance in art history” according to toywar.etoy.com. 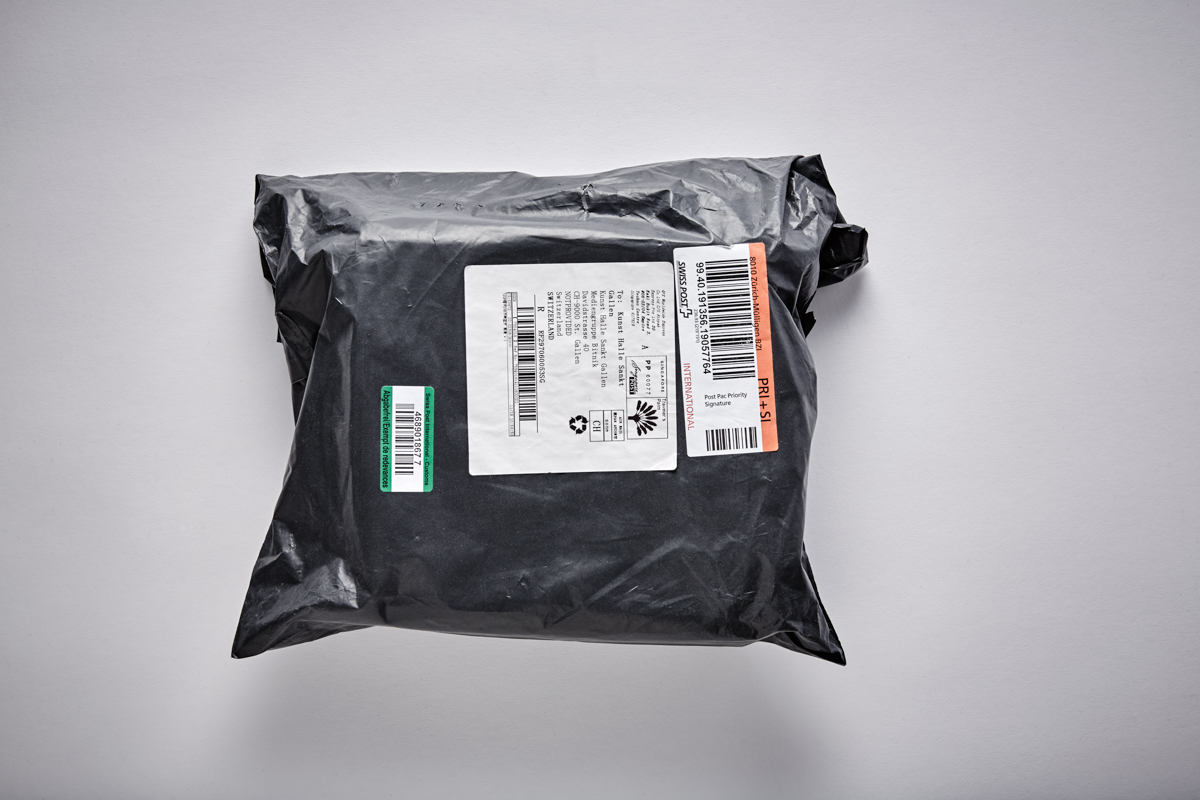 Berlin is advantageous because everyone comes here. Everyone passes through the city at some point.

“All art is political”, Sakrowski reminds us, even internet-based art as it exposes and questions the new structures of technological, social, and political power on and offline. Considering the genre’s roots in Dadaism and Fluxus, one continues to see similar experiments in which artists use the systems around them to execute their work. Decades after Ben Vautier and others explored pre-internet networks, the Cambrian explosion of innovation that was the internet gave rise to new forms of artistic practice and experimentation.

The Clubnetz that Sakrowski witnessed in the early nineties, the TOYWAR of the 2000s, and !Mediengruppe Bitnik’s artful trolling have made way for creative connections and critiques of what the internet was, is and may be if we are not careful. Despite the intangibility of the internet, physical spaces like Berlin remain critical to where net art is going. “There are always places like Amsterdam, London, Paris and New York,” says Sakrowski. “But Berlin is advantageous because everyone comes here. Everyone passes through the city at some point. The city touches and influences many projects, which is nice because it means that I don’t have to move very much.”