The madcap artist on his robotic band and cornucopia of junk 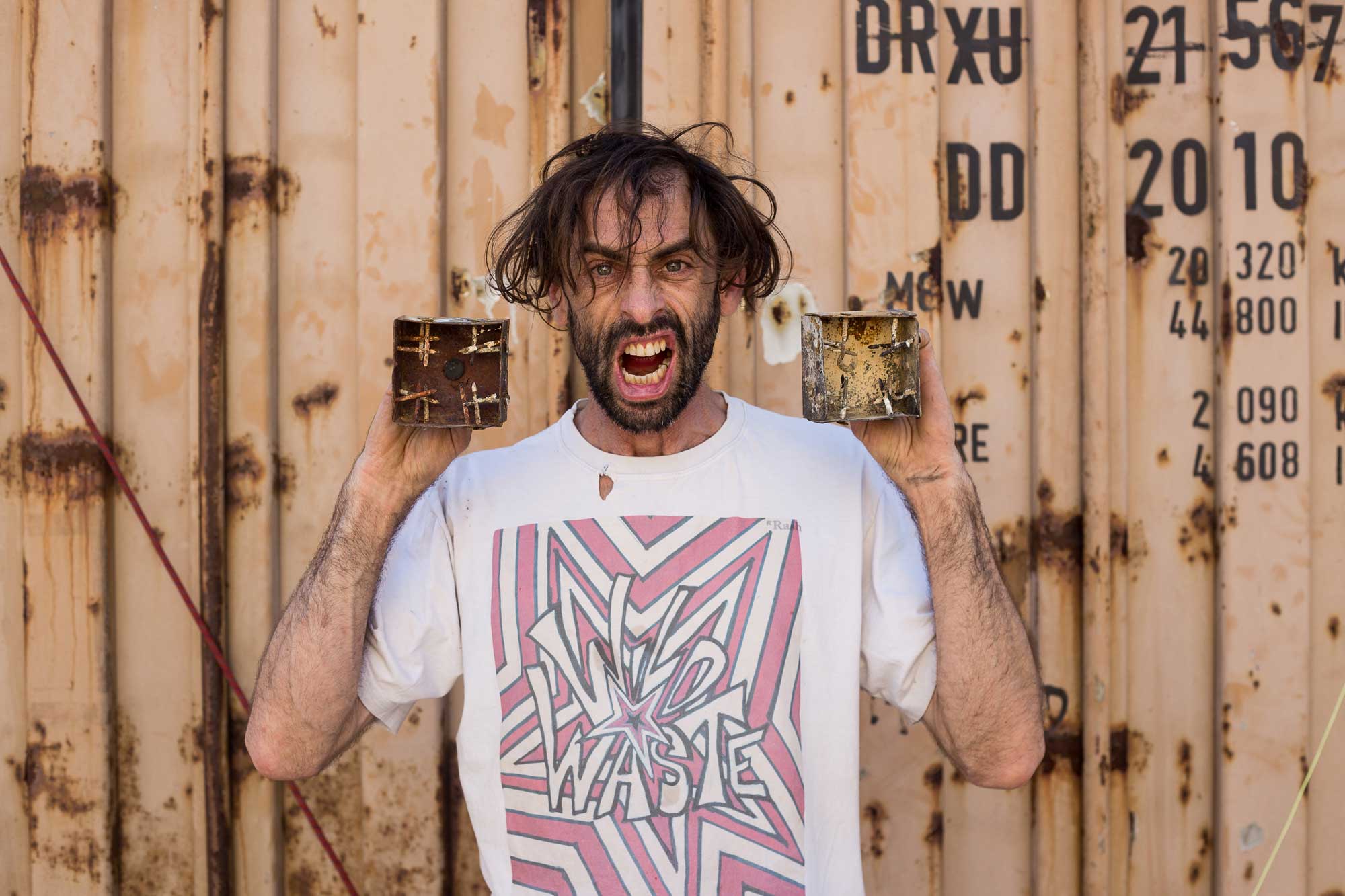 Kolja Kugler is one of those characters that makes Berlin the place it is. Yet the city, and its history, have left an indelible mark on his trajectory, both as an artist and a person. We met Kolja and his robotic musicians, the One Love Machine Band, to get a closer look at the nuts and bolts of his automated art, and to revisit a post-Wall metropolis where the possibilities were endless.

It’s a bright Saturday afternoon. Kreuzberg shimmers in the sunlight as it reflects off the Landwehrkanal. Just past Birgit & Bier, between a cement supplier, adidas’ swish RUNBASE and the now defunct Jonny Knüppel, you’ll find Kolja Kugler’s Wild Waste Gallery. His One Love Machine Band are set to perform to a small audience, some eagerly awaiting, others utterly perplexed.

Two towering humanoid sculptures loom over a makeshift stage, one clutching a bass guitar in its gargantuan hands, the other hunched over a ramshackle drum kit. Without their instruments, they’d look at home in The Terminator. Kolja flits between his scrap creations, tinkering with wiring and pneumatic pistons, before returning to his control desk. To the left of the duo sits the band’s manager, Sir Elton Junk. The surreality of the scene is intensified by the shipping containers that form an industrial henge around the space’s perimeter. 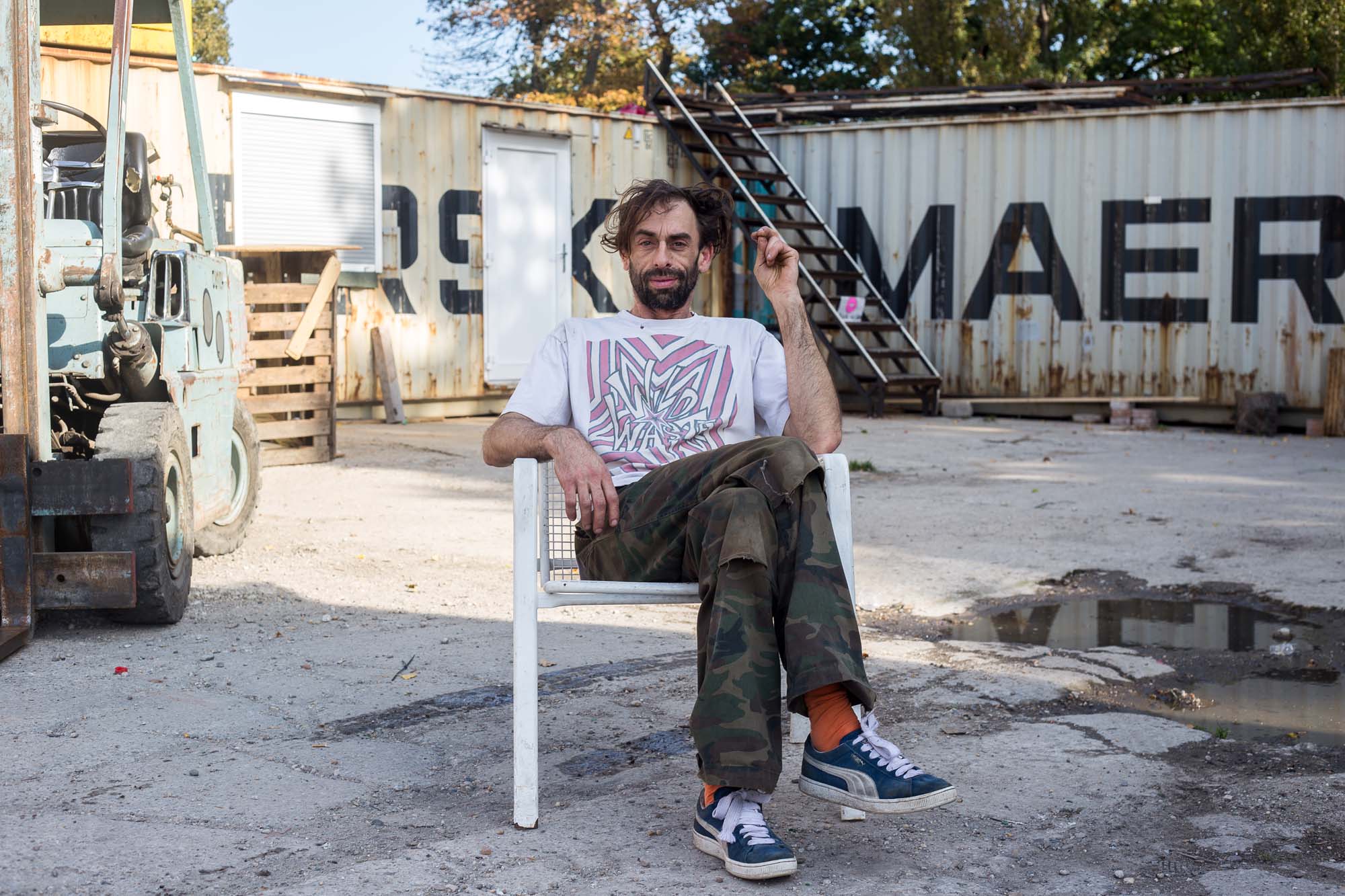 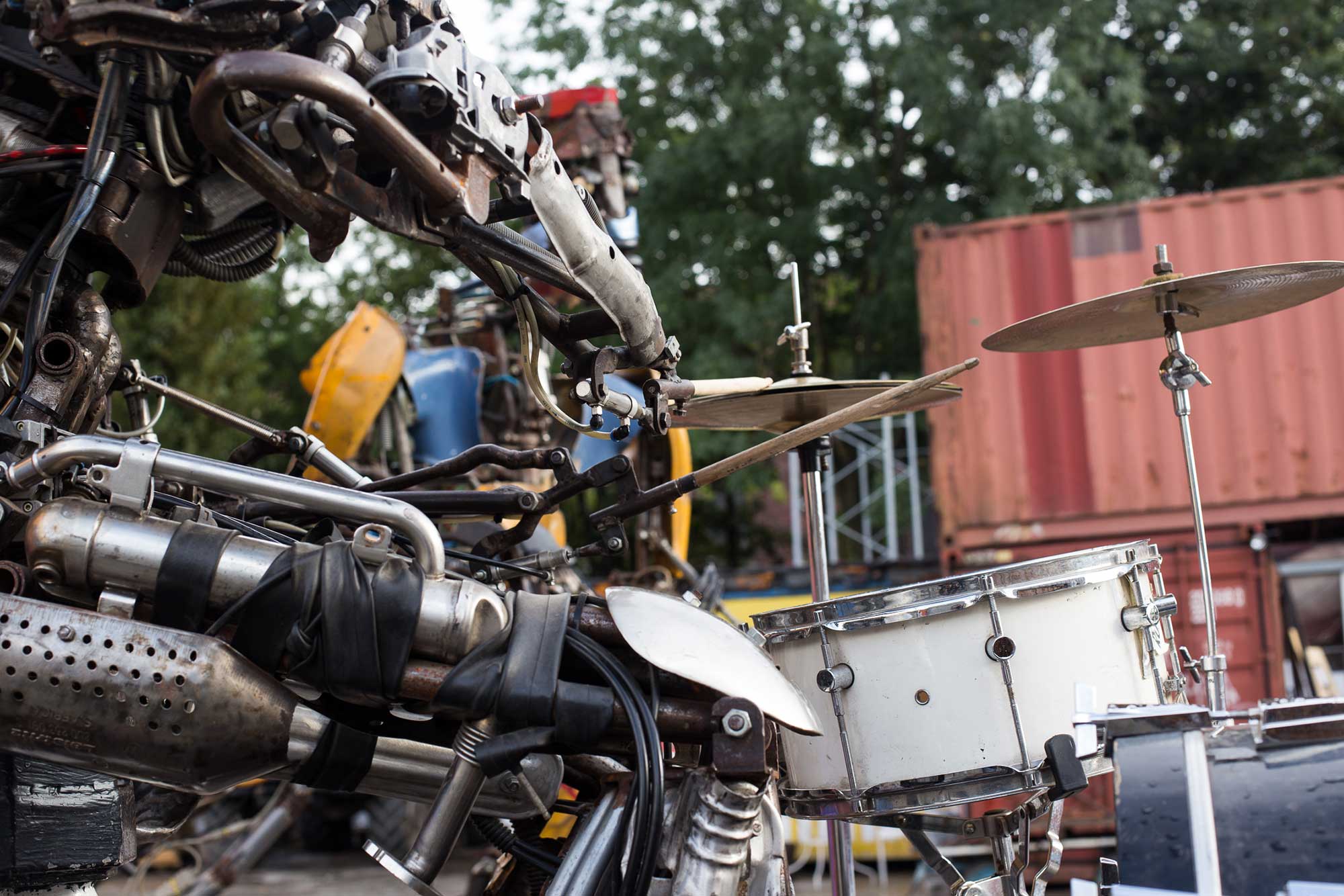 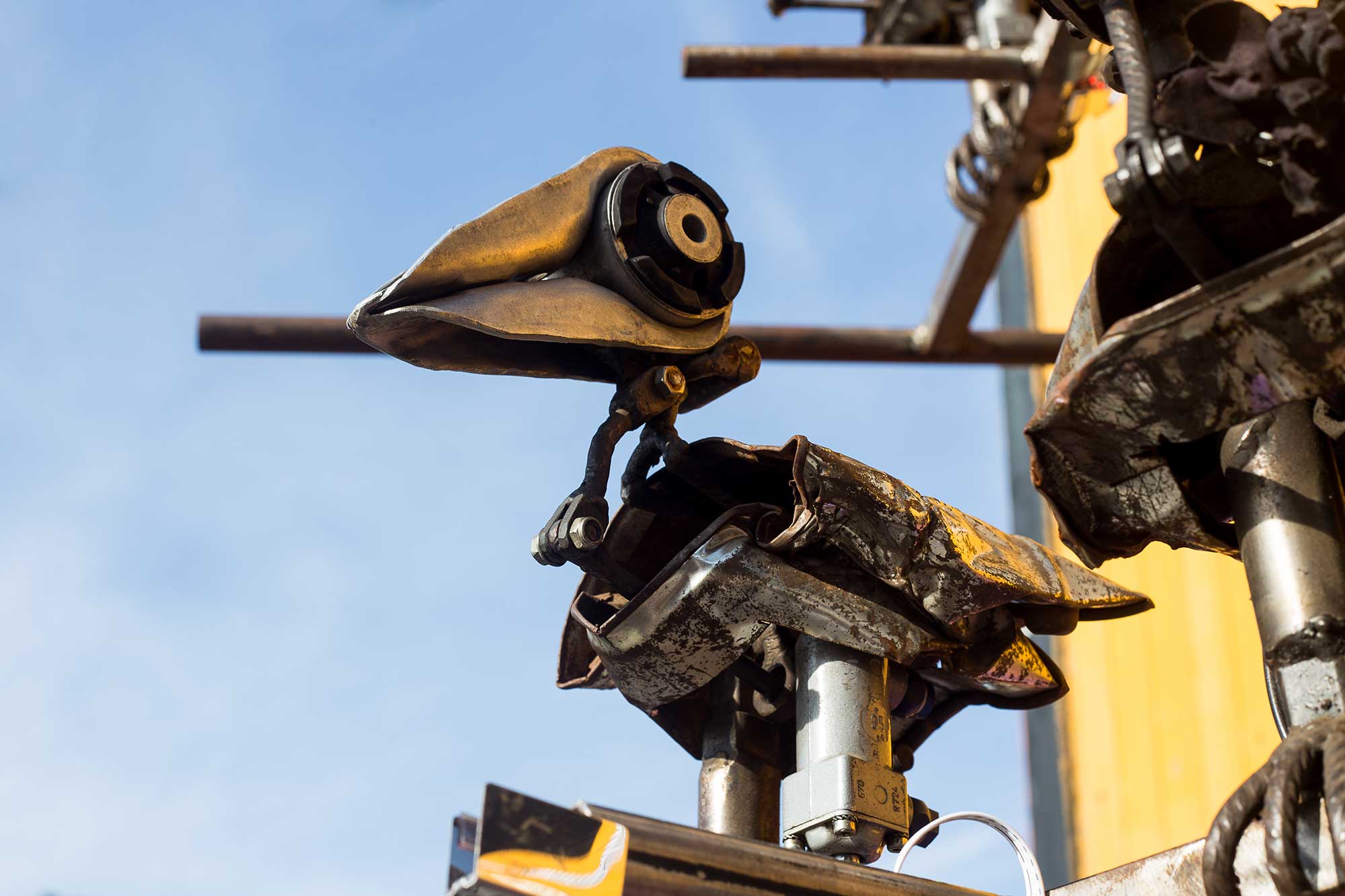 Kolja’s ‘droids jerk to life, performing with a thundering mix of percussion, creaking metal, rushing air and pounding bass, overlain with a chorus of flute-playing robo-birds. It’s as eccentric as it sounds. The spectacle comes to a close with Kolja actually playing Sir Elton Junk, the flailing, spindly-looking machine spraying water over the transfixed crowd. Following the frenzy of the performance, Kolja agrees to talk to us. After what we’ve just seen, we don’t know what to expect.

Kolja shows us around his Pankow workshop. It’s a cornucopia of junk, some of which has been repurposed into his distinctive sculptures. In many ways, the organised chaos of the One Love Machine Band spills out onto the shelves of Kolja’s space. He lives next door in a converted cabin, which is where we retire to hear about his life. 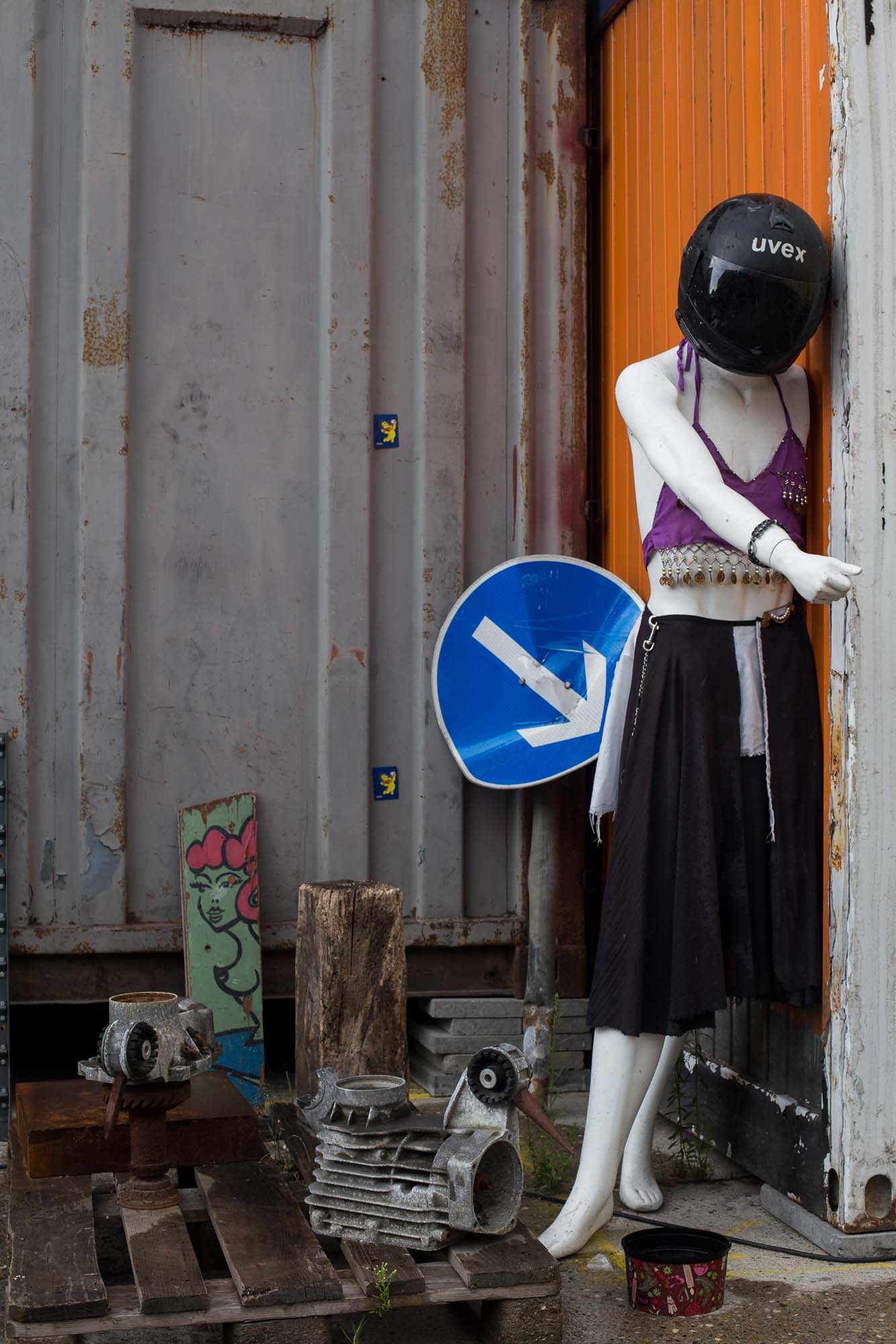 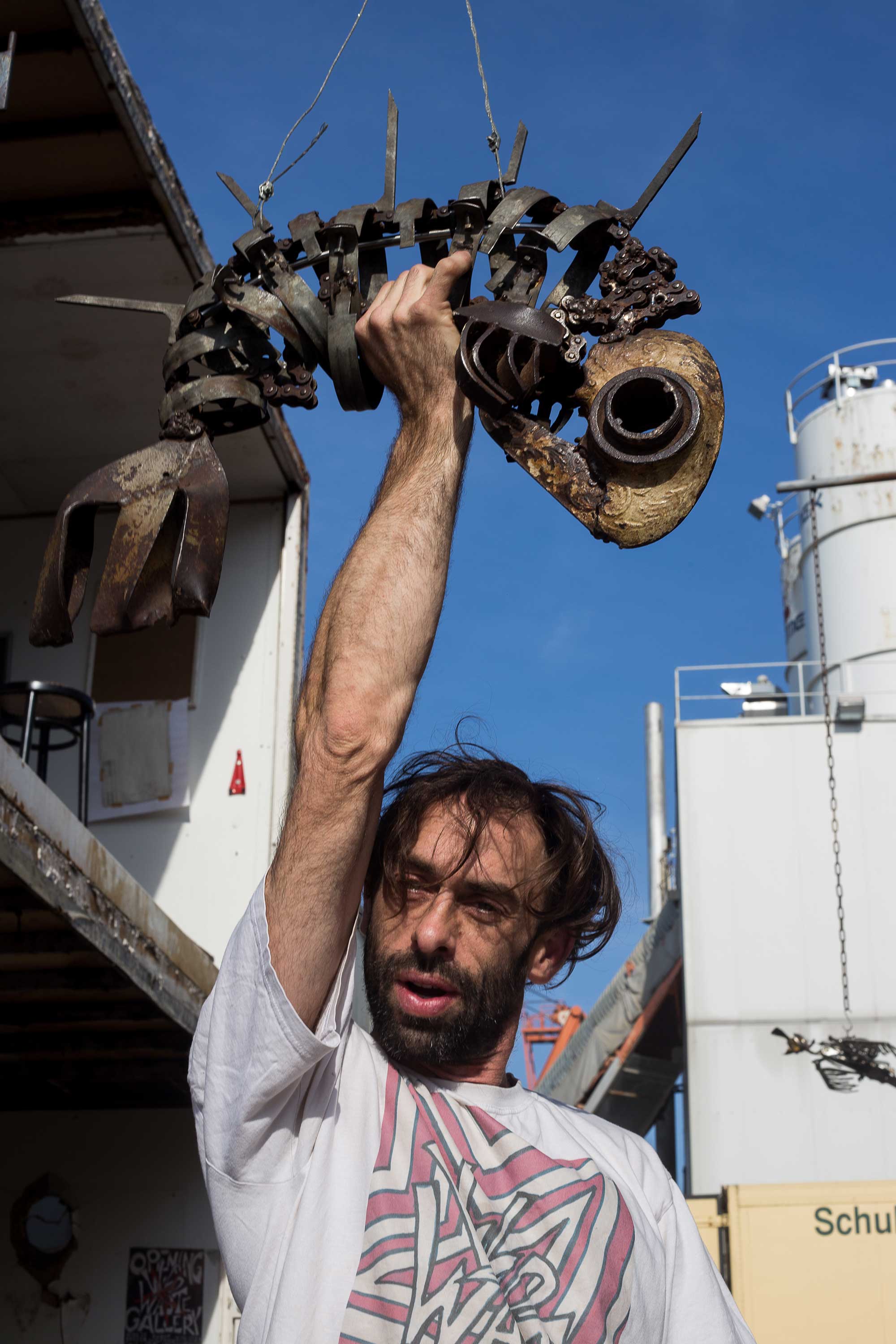 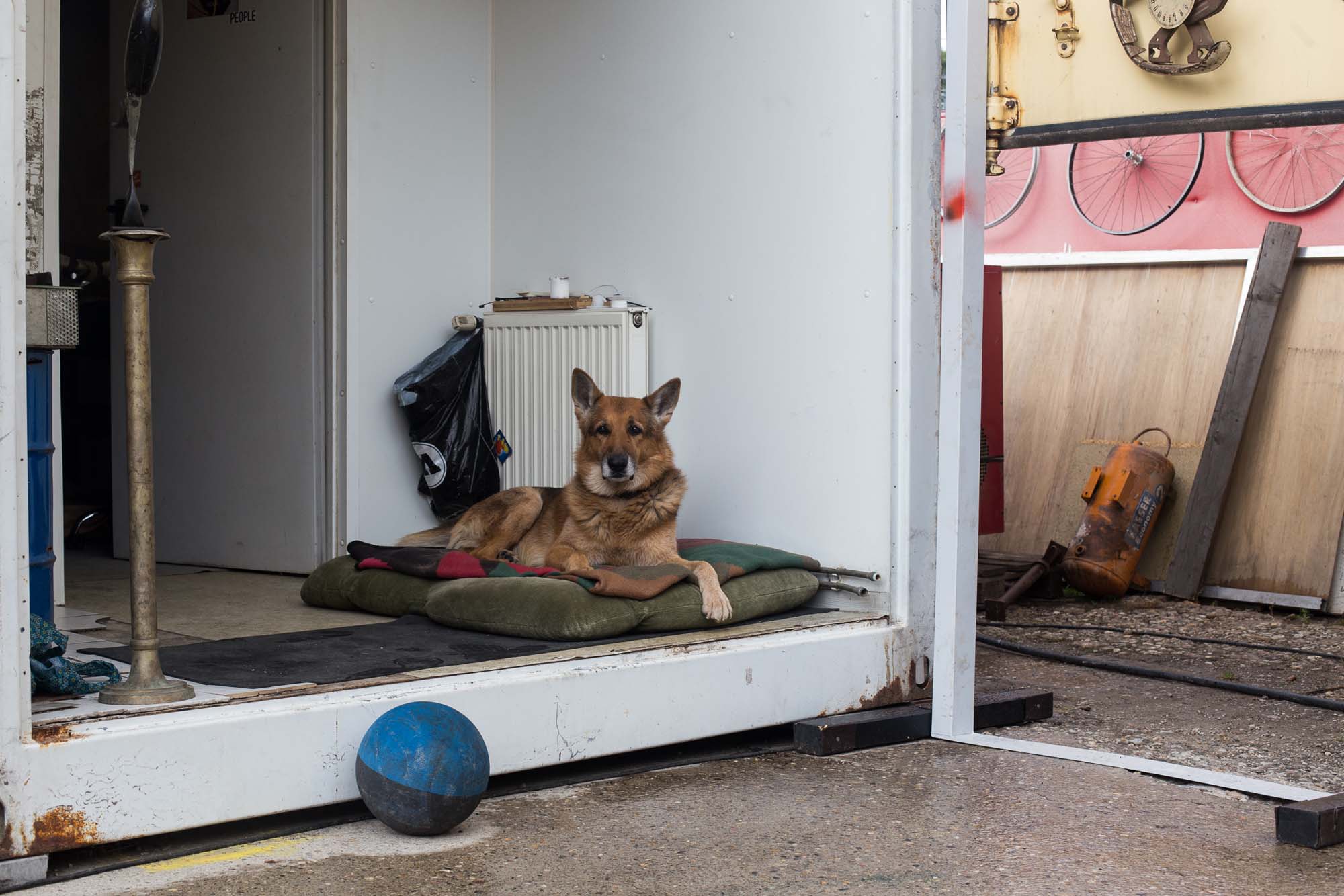 He was born in Göttingen, but Kolja’s parents moved to the capital when he was three to settle in Charlottenburg’s lakeside Lietzensee Kiez. It was West Berlin, and growing up with the constant threat of nuclear apocalypse (and protesting with his parents) had a profound impact on young Kolja. “The arms race was very present. We’d have been the first ones to go as we were living on the front line of the Cold War,” he tells us. “It was a totally mad situation that we had gotten comfortably used to,” he says. “But then it suddenly fell apart into common sense with the Wall falling. Nobody expected that to happen.” Kolja’s reality changed abruptly and Berlin morphed into a playground of possibilities. “It was a great atmosphere, you could do what you wanted,” he says. “Just witnessing it collapse totally shaped me. I decided to start changing the world around me.” Shortly afterwards, he moved away from home: “I found myself squatting in Potsdamer Platz, which was just a whole bit of nothing, just mud and wasteland.”

This would prove to be momentous for Kolja. One early ‘90s winter, The Mutoid Waste Company, an art group fronted by British punk-junk artist Joe Rush, pitched up at Potsdamer Platz. The now fabled collective were busy making a name for themselves by dragging decommissioned Russian Army machinery into the city centre and rearranging it into art right in front of the Reichstag. Unbelievably, this included two MiG-21 jets. “They did Berlin the biggest favour,” says Kolja. “Demilitarising those fighter planes, painting them and putting them in the hands of the people, it was so punk.”

“What got me straight away were the sculptures, especially Joe’s: he’s kind of my idol. So I learned to weld and made some myself.” For the following few years, Kolja and co. lived on a sculpture garden they’d set up in their slice of no man’s land. “Tourists were coming every day and we were pretty much the only thing to look at; there was only the odd piece of the Wall standing around,” he says.

Demilitarising those fighter planes, painting them and putting them in the hands of the people, it was so punk.

In 1993, London-born techno sound system Spiral Tribe arrived. Alongside the new arrivals, Kolja and the Mutoid Waste Company decided to hit the highway: “It kind of made sense, we’d got all this stuff, we lived in trucks, we were making art, why not do a road show?”

“We joined together to take this MiG to Russia, to give it back to express our joy that the Cold War was over,” he says with a smile. Renamed the Lost Tribe of MiG, they set off for the former USSR with one of their showpiece fighter jets mounted onto a crane arm so as to simulate flight.

Things didn’t quite go to plan though. “We left Berlin, but the crane wasn’t roadworthy anymore so we put it on a massive Russian low-loader we’d found. As we were leaving Berlin, the truck gave out. This dense white smoke came out of the exhaust and covered the road, you couldn’t see for half a kilometre,” Kolja recounts. Leaving the stricken lorry by the roadside, the convoy abandoned its precious cargo “in front of some guy’s house,” promising to collect it in a few weeks. They pressed on for Prague. Nobody returned. 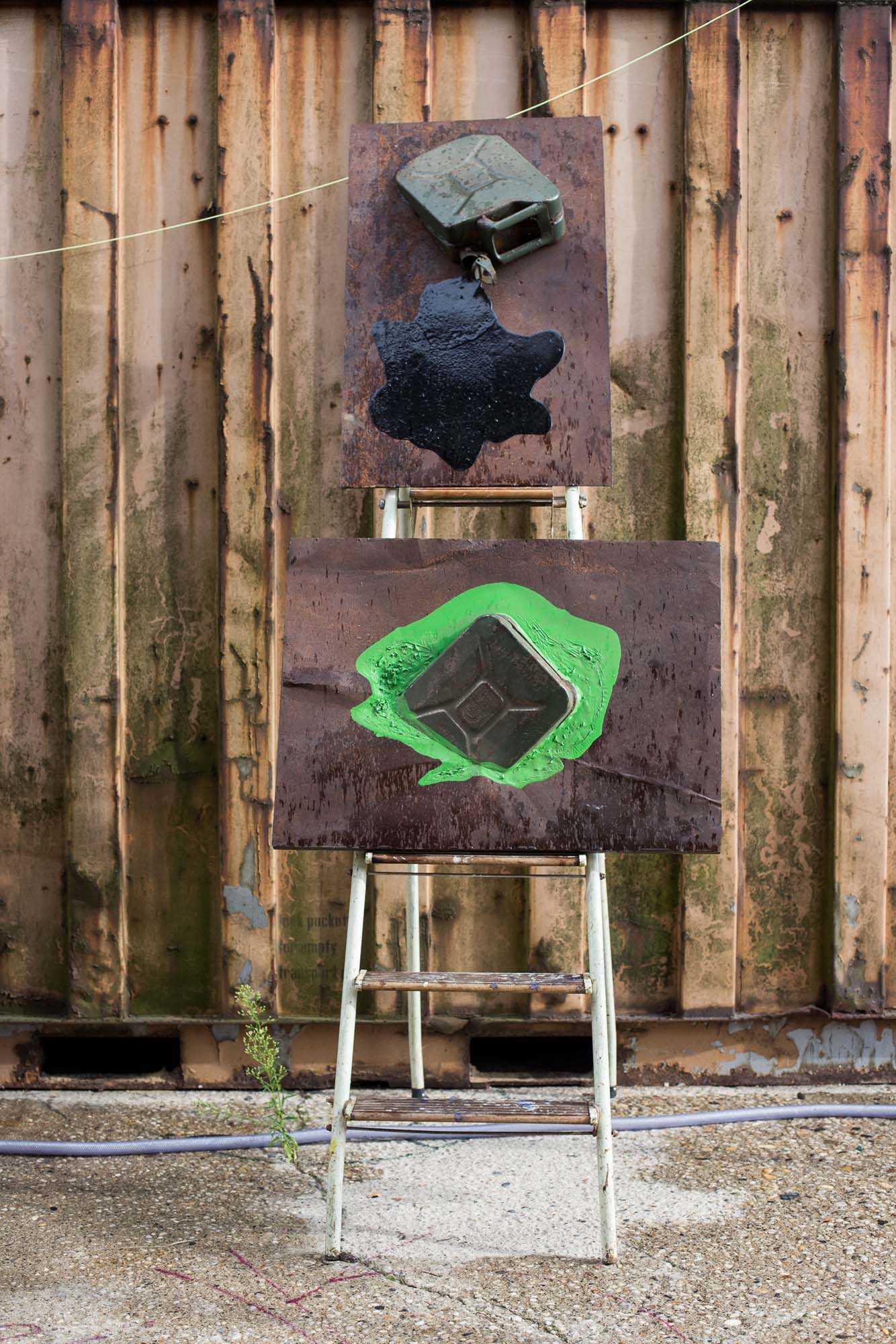 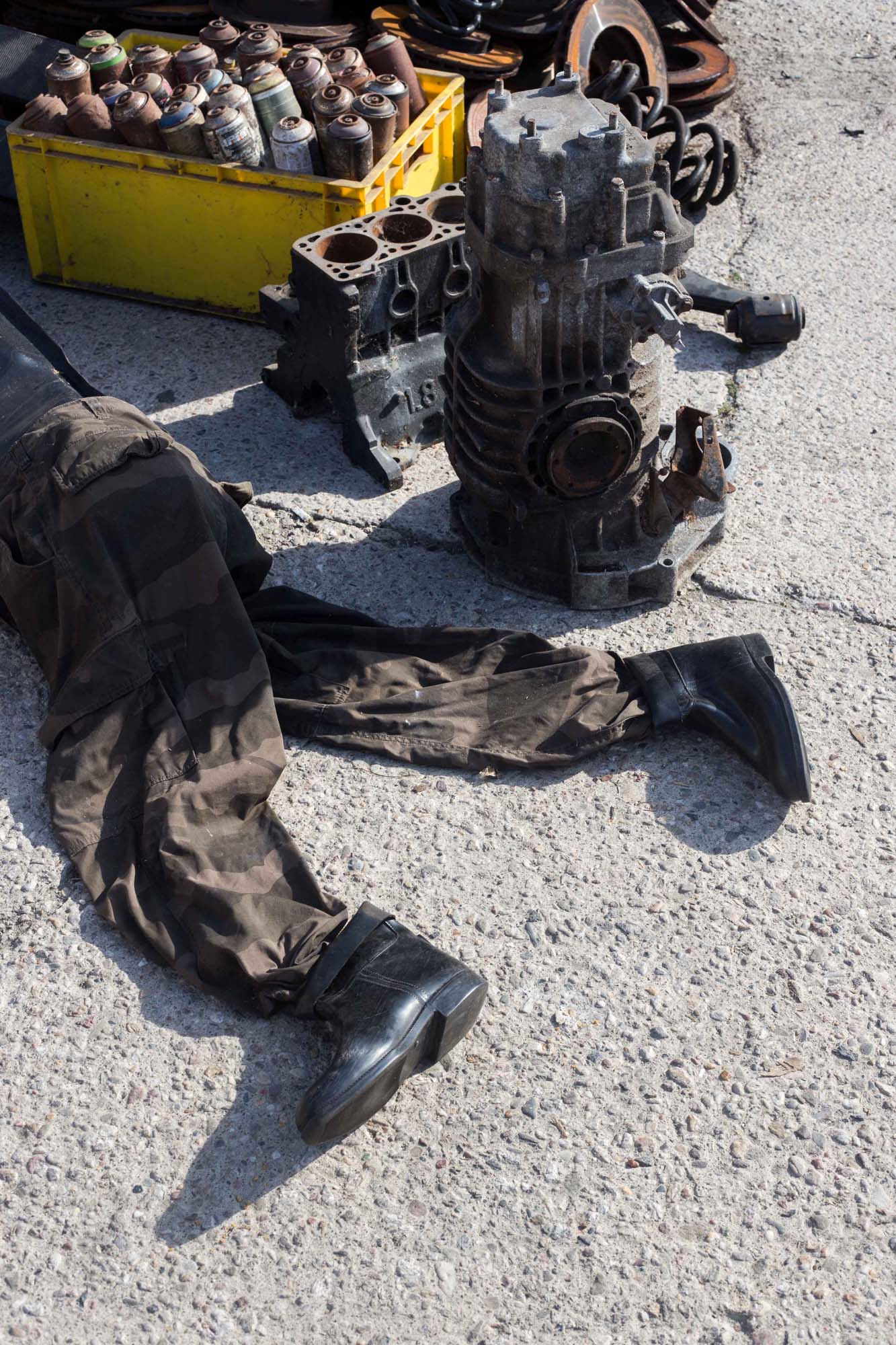 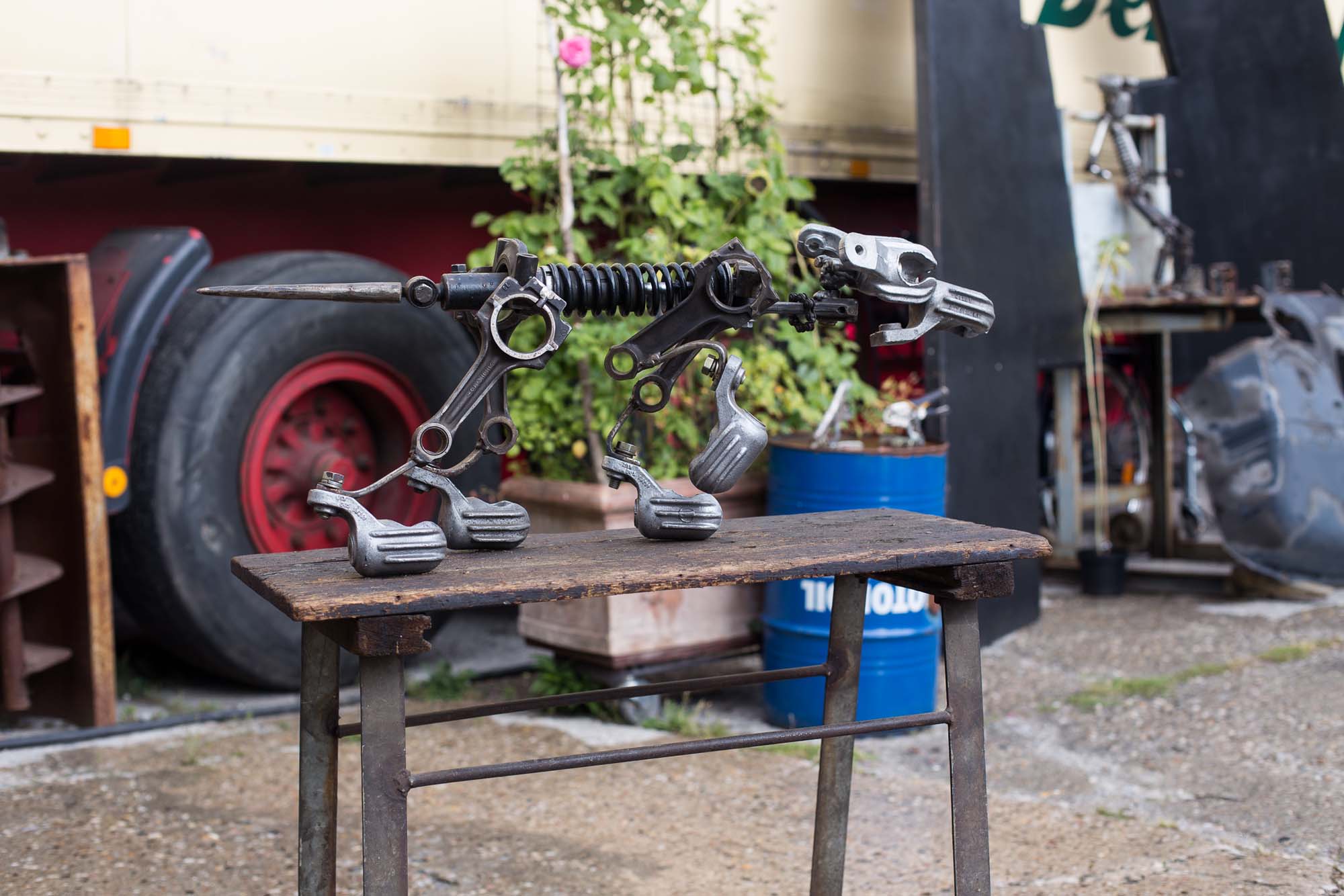 After finding a patch of land to squat outside the Czech capital, Kolja helped set up the inaugural CzechTek freetekno festival in 1994. However, the Lost Tribe of MiG disbanded soon after. Kolja then travelled around Europe with Spiral Tribe and his own Alien Pulse Agency sound system, raving it up across the continent at Teknivals that “got really big, really mad and really tribal!”

During Kolja’s Euro trip, his sculptures evolved too. “It was hard on the road without a workshop. I always sculpted wherever I was, in the ditch with a generator,” he says. Kolja adds that at first, he’d “look into a pile of scrap and see birds, maybe because it was the easiest shape to make.” Tackling dogs was the next challenge before eventually making a humanoid face.

“I found these pliers, then with some other bits formed this really scary looking skull,” he says. “Since the pliers were the bottom jaw, you could open and close the mouth.” Not long after Kolja sussed out how to move the skull, Frank Barnes, a friend he’d been travelling with for years, introduced him to pneumatics. “He was the first guy to move his sculptures pneumatically. That was the moment I thought, ‘OK cool, there’s something happening’, and I carried on building.” This was the beginning of Sir Elton Junk. We were a bit like a circus in the mad colourful truck. It was intense. 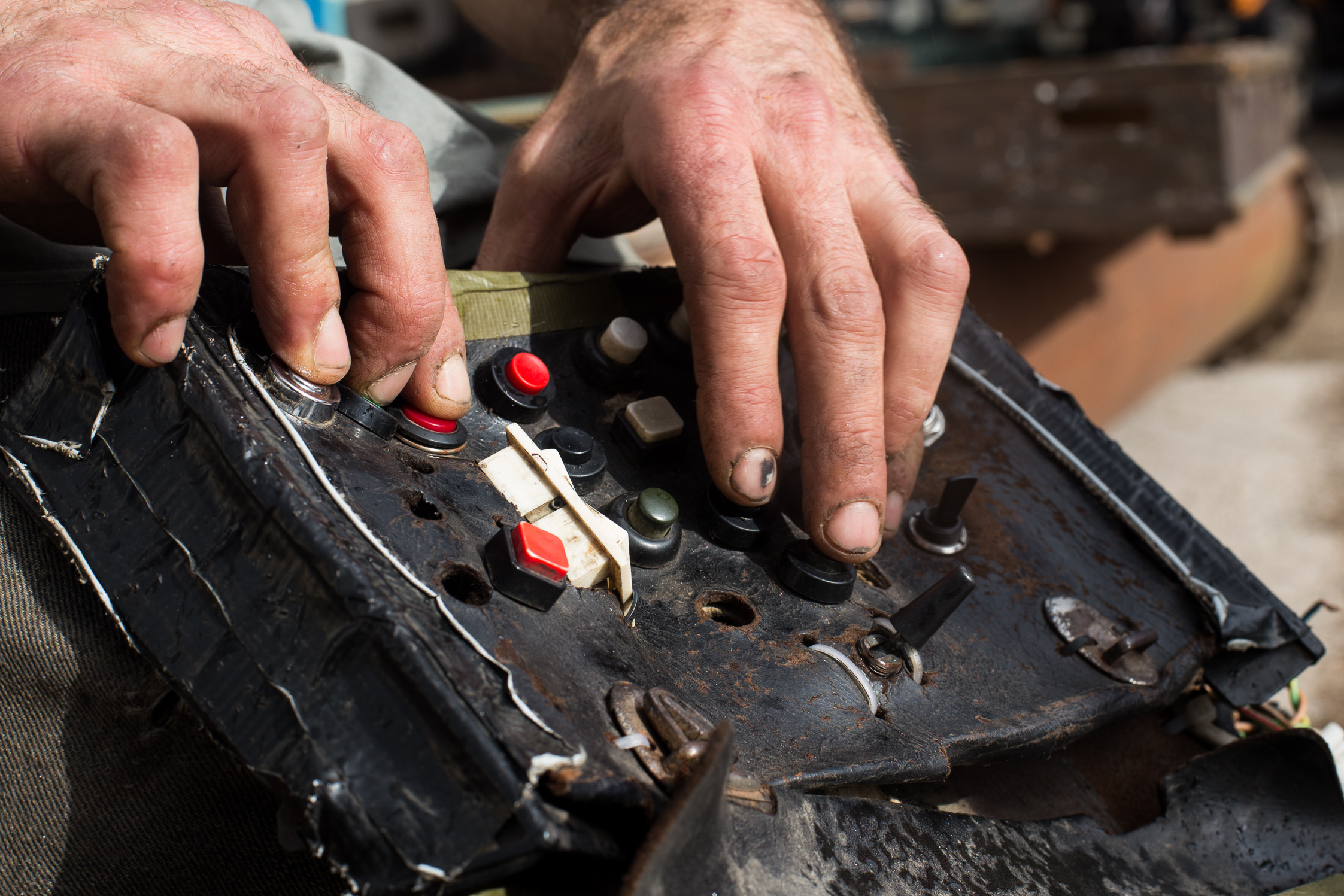 In 1999, just as he was working on his robot’s limbs, Kolja became a father. “They were born at the same time, Elton and my daughter,” he says. Kolja and his young family ventured off on a trip that took them to Australia, Southeast Asia, North, Central and South America. “I’d wanted to go around the world, and fortunately my partner was quite cool about travelling and said ‘Why don’t we go with the kid?’” They spent the next six years traversing the globe: “We were a bit like a circus in the mad colourful truck. It was intense. I took Elton too. He sat on the sofa in the truck. I gave countless Elton robot shows in different places; there were some amazing culture clashes.”

After globe-trotting, Kolja returned to Berlin. “It was an intense chapter in my life that opened like a book and closed like one too,” he says candidly. “My daughter had to go to school and my ex decided to move to Freiburg.” Having to start over at 35 while supporting his daughter on the other side of the country was a challenge. “It wasn’t a shock, I’m used to rearranging my life. The real shock was the breakup, it pulled my heart out,” he admits.

Amongst this reshuffle, Kolja persevered. “At the time, me and Frank were thinking about what we can do with pneumatics, we thought, ‘Let’s build a band and make some music’.” And with that, he got started on Afreakin Bassplayer, the first member of his robot band. “The focus for Frank was more on the engineering; for me, it was classic sculpture,” Kolja says. “My sculpture was going to play bass and it had to look good. I was learning to get the balance between the mechanics and the sculpture’s character. It took me four years and I freaked out multiple times!” But by the time Kolja came to build the onomatopoeically-named drummer Boom Tschak, he had the technique nailed. Right now, Kolja is in the process of building a keyboard player for the One Love Machine Band. He also reveals that he’s managed to get his hands on the second of the Mutoid Waste Company’s MiGs: “The other one was stored 150km from Berlin, sitting in a bush. I brought it back along with a bulldozer. Instead of having it on the crane, I want to mount it on the ‘dozer and fly it about. I’ll cut it up so it can bend like a fish and chop the wings to make it flap like a bird.”

If you’ve never met Kolja in person this might sound absurd, though you’re this far into his story so you probably wouldn’t bet against him. For now, he’s using the Spree-side Wild Waste Gallery to showcase his work: “I wanted to establish a place where people could come, just like the space at Potsdamer Platz with the Mutoid Waste Company. Now I find myself in that position again, also on the border. Berlin is a place where things come full-circle.” In another beautiful twist of fate, Spiral Tribe are also renting the space with Kolja. “It’s great we’re all in one boat,” he says. “We seized it to begin with, now it’s clear what we want to do and we’ve got a lifetime of experience to make it happen!”

Berlin is a place where things come full-circle.

The lease on the Wild Waste Gallery is only short term, but that doesn’t bother Kolja much either. “My stuff is mobile, we’re all on wheels. Now that my daughter has grown older and I’m more free, I get itchy feet to go on the road again. I’ve always wanted my thing to be a roadshow. I’d love to have a permanent space, but I’m not counting on it,” he says.

In many ways, Kolja’s oeuvre has come to embody the spirit of the era in which he grew up. And it’s something he’s conscious of. “Berlin is so attractive because of this feeling in the air. It’s the artists who made this city and who used the open-mindedness of the ‘90s when the system was ripe for reconstruction. Berlin is like this because so many people had this feeling of all the possibilities to do what they wanted to do.” Whatever the next stage has in store for Kolja, it’s bound to dazzle.

See more of Kolja’s work here, but to see The One Love Machine Band in full swing head to Wild Waste Gallery on Saturday afternoons.