The nominees of the 2017 Preis der Nationalgalerie discuss their work 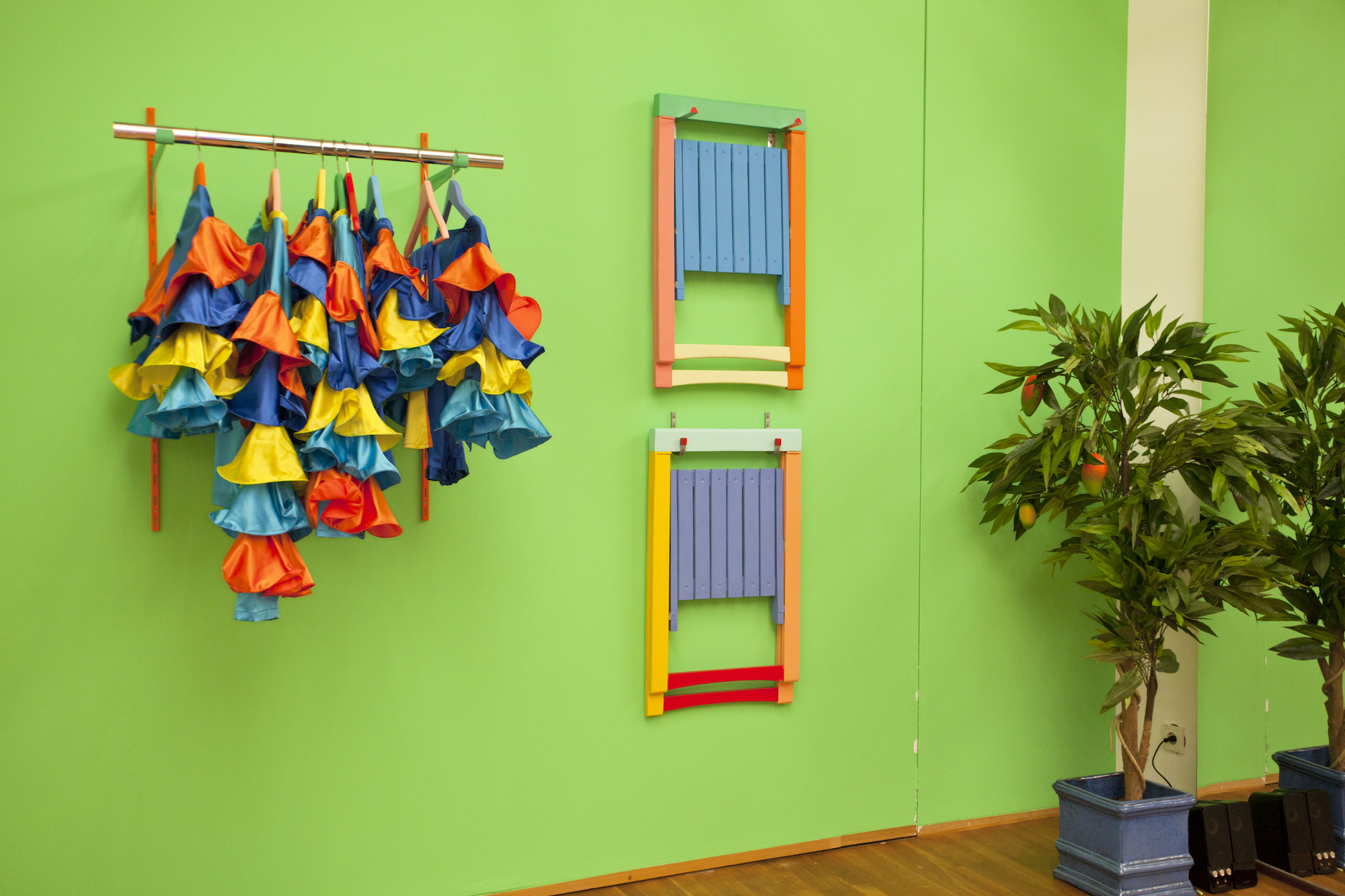 Established in 2000, the Preis der Nationalgalerie has become one of Germany’s most prestigious art prizes. Every two years, four artists under 40 living and working in Germany are selected by a jury to showcase their work at the Hamburger Bahnhof. The winning artist is awarded a solo show the following year in one of Berlin’s Nationalgalerie locations.

The prize, now in its ninth year, has helped to launch the careers of many who later grew to international fame, including Dirk Skreber, Monica Bonvicini and Omer Fast. Anne Imhof, who wowed audiences last year with her operatic performative piece Angst II, went on to win the Golden Lion at the Venice Biennale this year, perhaps a testament to how the prize can propel an artist’s career forward.

This year marks a groundbreaking shift away from previous years, with all the artists represented being of non-German origin, and all women. Despite the jury insisting that the work itself dictated their choices, the embracing of exclusively women artists of immigrant origins is a bold statement, particularly after an election year that saw the AfD rise to 12.6% in parliament. Despite pronouncedly diverse practices, Sol Calero, Iman Issa, Jumana Manna and Agnieszka Polska, the four nominated artists, each grapple with overlapping themes in their work. Questions about national identity, history as discourse, how communities form and break apart, are themes that weave themselves through the exhibition space, prompting viewers to examine some of the most fundamental issues facing humanity today. 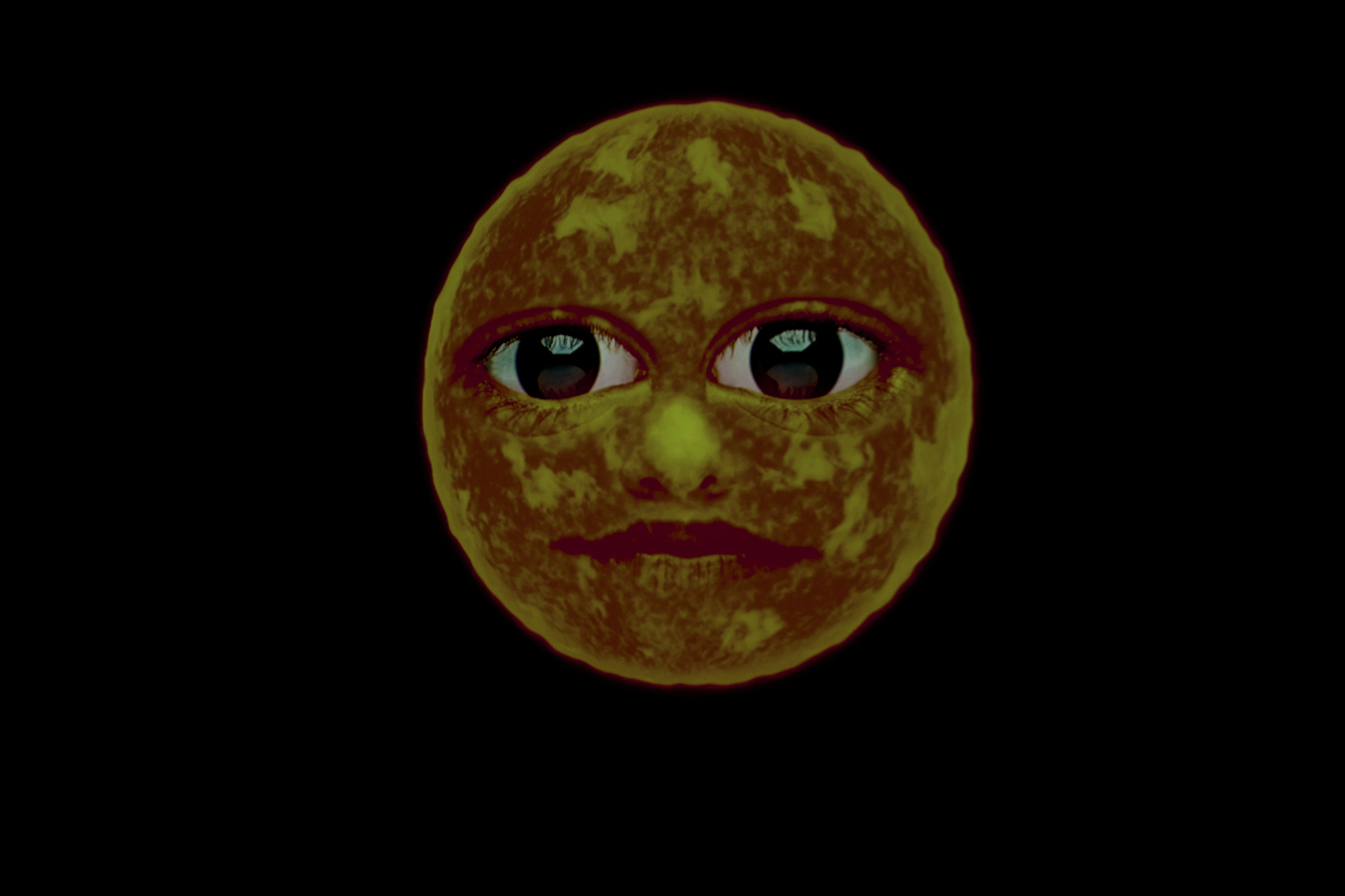 Agnieszka Polska, a Polish artist who works primarily in video, contemplates the apocalyptic through the poetic with her installation consisting of two films entitled What the Sun Has Seen. Featuring an animated sun waxing poetic on a variety of themes, Polska’s animation seamlessly blends humour with philosophy and seductive aesthetics. “In general, my work is interested in the responsibility of an individual and of an artist,” she says. “Most of my films are constructed similarly to poems. What interests me is the ethical ambiguity of our time.” This ambiguity is a throughline in all her work, much of which occupies itself with exploring the arc of history as nonlinear, malleable. “I’m very interested in the processes of influence that are happening in the various fields, which is language, history, consciousness; this is what interests me, and of course this is very close to the reflection on the social processes.” While Polska sees her work as motivated by political issues, such as climate change and the political situation in her native Poland, she wouldn’t describe it as polemic: “I’m not taking any direct political actions in my work. I’m more into the field of poetry. I can be active politically in different fields, but it’s not really my art. My art can be about ethics without necessarily taking a direct political action.” 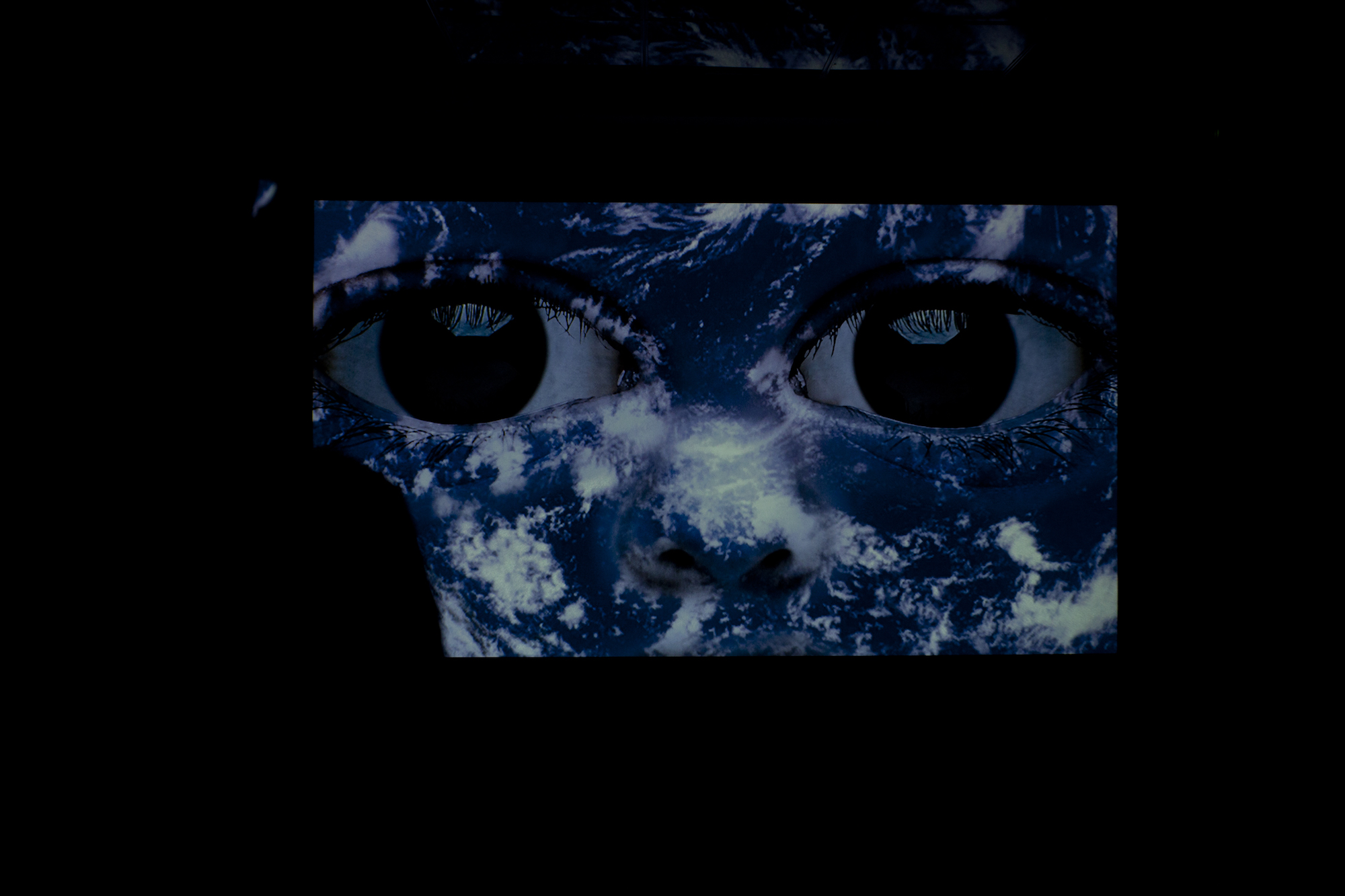 Where Polska’s work takes a more ambiguous, philosophical approach, Palestinian artist Jumana Manna’s sculptures and video installation tackle political themes more directly. Her seductive sculptures strategically placed around the dim room read as anthropological, yet somehow bodily. Her film entitled A Magical Substance Flows Into Me, inspired by a radio programme from a German-Jewish ethnomusicologist who studied the oriental music of communities in and surrounding Palestine, weaves together the personal, historical, and political: “This film is informed by the work of a social anthropologist who was born and raised in Berlin, he was forced to leave due to the rise of the national socialists in the 1930s, and decided to emigrate to Jerusalem and continue his research there … In a sense I have a similar but opposite trajectory.” Manna sees her sculpture and film practices as two vehicles for exploring the larger themes she works with: “I think a lot of my work has to do with the surreality and the history of talking about place through the body and through the senses, so I think that’s the main commonality between the film and the sculptures. I also combine different temporalities, so things that are crafted and look like they’re historical, something that’s preserved with things that are crass and considered the detritus of contemporary life.” 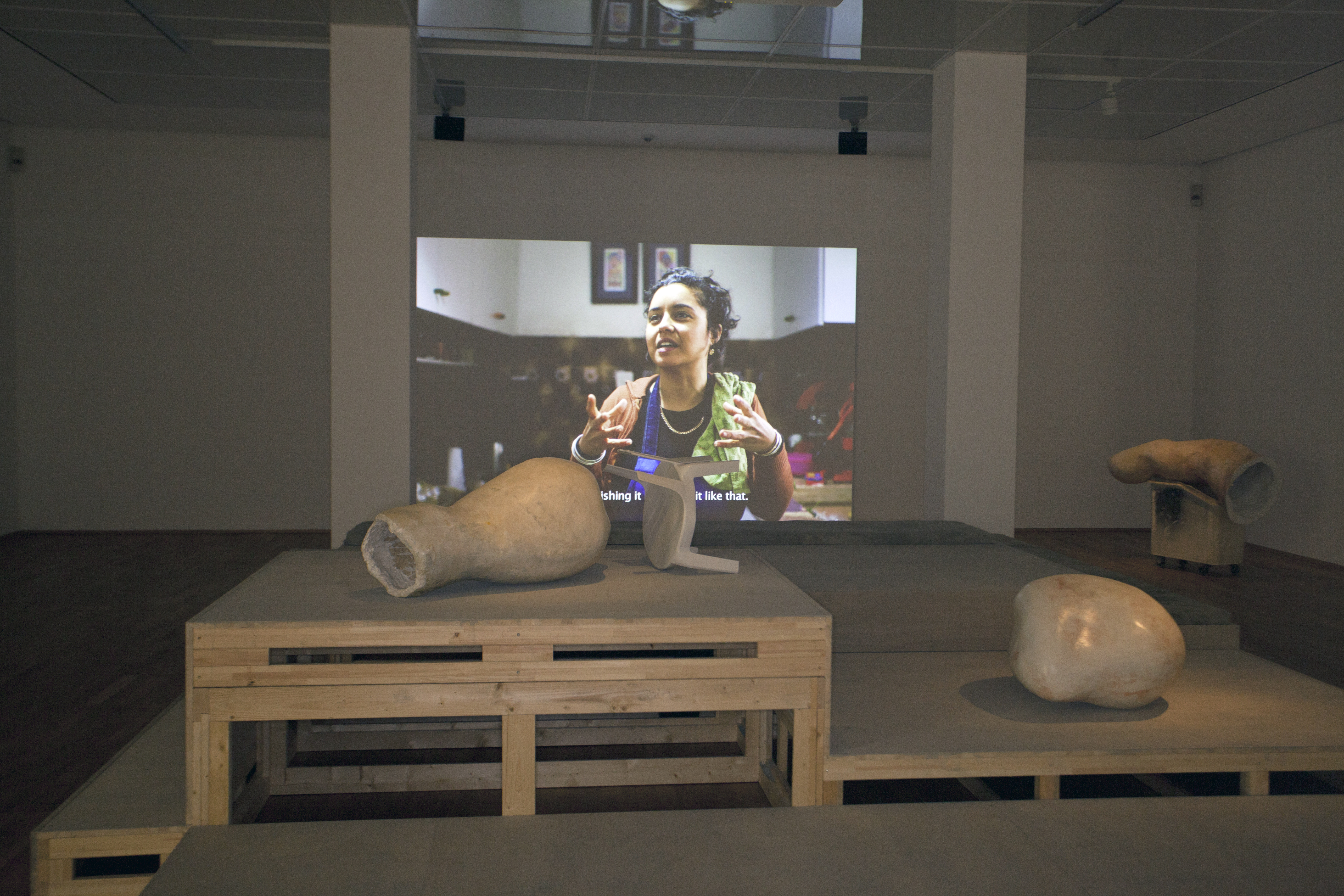 Manna draws heavily on research, but also on her own biography, and her film’s strength in particular arguably comes from the seamless conflation of the personal with the historical: “I’m interested in how personal histories provide an alternative narrative to macro histories. How they can in some cases fit into ideological narratives and in some ways deconstruct them, or debunk certain myths about nationalism, ideology, about a certain place. So I often deal with these larger political or historical questions through quite personal narratives and individual lives to show that things are often more complex than they are said to be.” 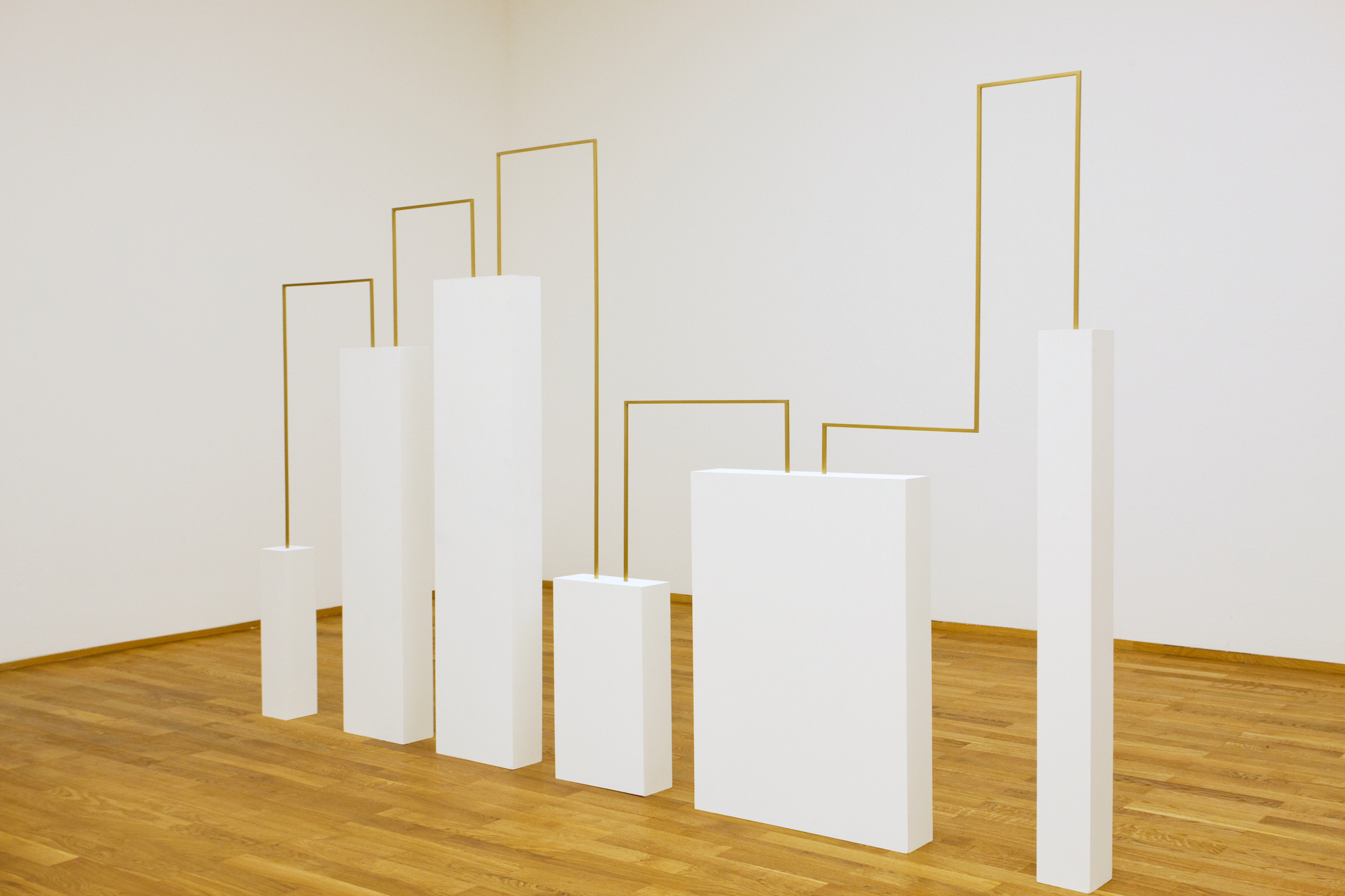 Also employing an approach to the deconstruction and reimagining of history is Egyptian artist Iman Issa, whose minimalist sculptures from her Heritage Studies series are inspired by ancient artifacts that have been reinterpreted by the artist. A formal caption accompanies each piece, giving a veiled reference to the sculpture’s inspiration. “The heritage studies project started in 2015 and I was looking at artifacts and grappling with the question: why do we look at artifacts to begin with?,” explained the artist during the press conference. “And what I decided to do is make the forms again … Almost everything I made looks nothing like the original, the caption for me is meant to evoke the original object through language. However, I think the text is just as much a part of the work as the objects: I don’t think the objects take precedence over the caption.” 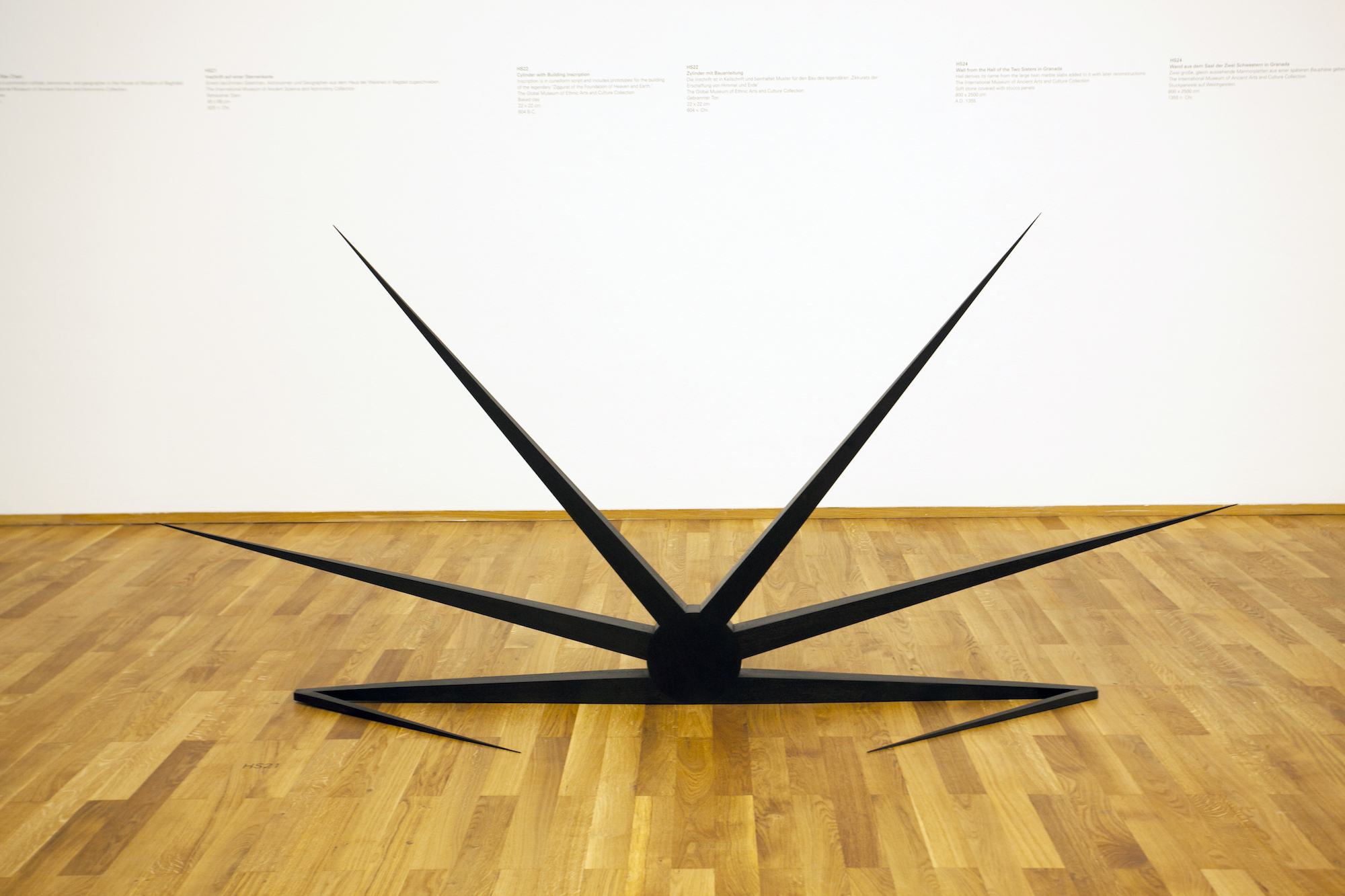 The large, polished objects reflect the artist’s minimalist instincts, while retaining a playfulness and almost gestural quality. Rather than diving into the personal, the work deals directly with the question of how we look to history in search of solutions. “When I chose the title Heritage Studies, it wasn’t because it had anything to do with my heritage. That’s not the criteria for the objects. The idea was heritage as a field, as a discipline, and looking to the past toward a practical end. So it’s very much looking to the past with the idea of trying to accomplish something.” 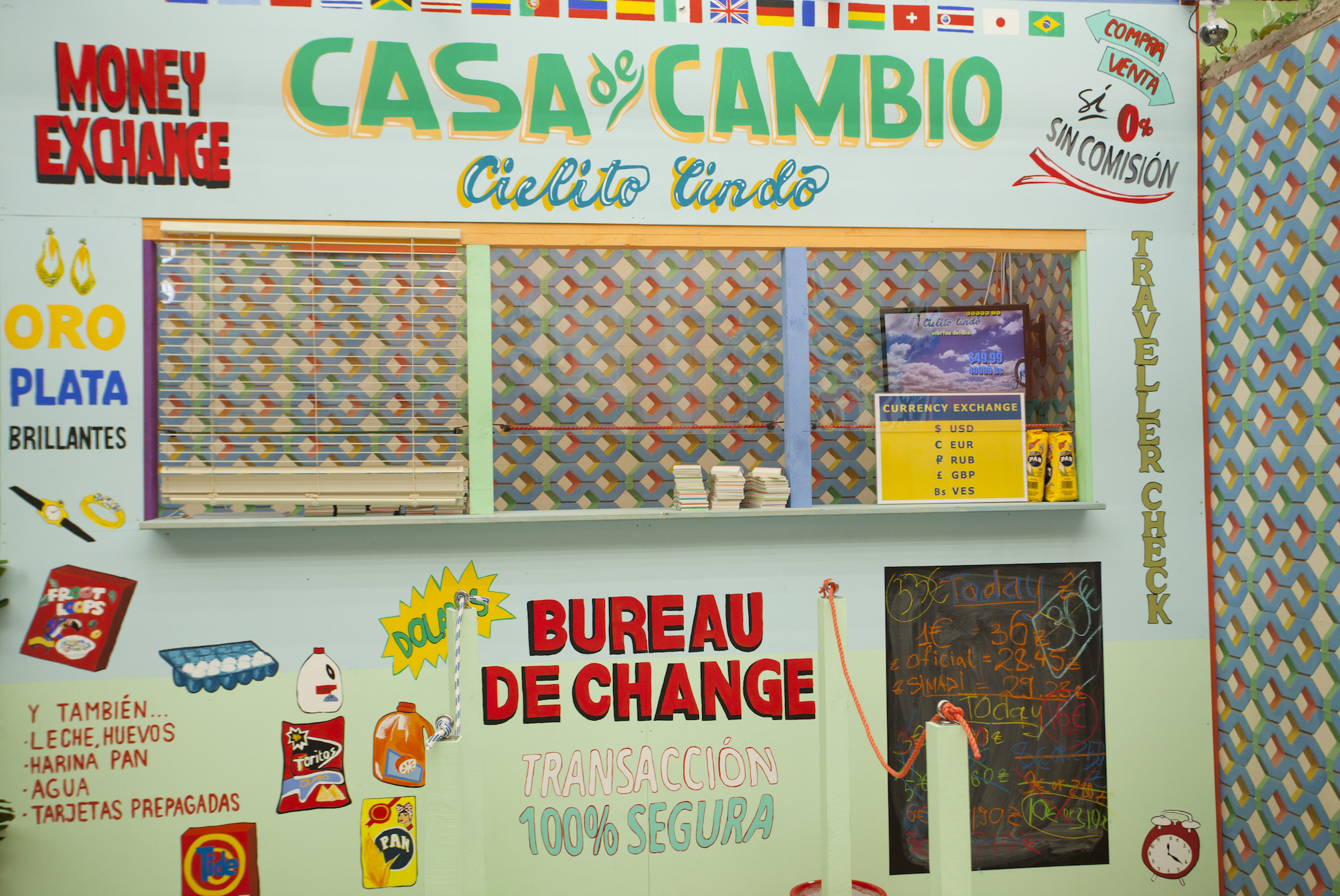 Venezuelan artist Sol Calero doesn’t obscure her references, preferring to throw them all in a room together to see what will happen. Arguably the most visually striking work in the exhibition, Amazonia Shopping Center combines a nail salon, salsa studio, cybercafé, travel agency, currency exchange, and cinema playing Calero’s self-produced telenovela. The body of work began to take shape five years ago as the artist, who emigrated from Venezuela to Spain at the age of 17, began to rediscover Latin American art as a way of reconnecting with her own history.

“I’m interested in the position of this person who is trying to integrate,” Calero explains, “And who loses their roots from either position. You suddenly become from nowhere. And I think this point of view of talking about “nowhere-ness” is an important position. What happens in this state of not belonging to a place? How do you pull things from the pre-conceived ideas that you have about your own culture? As an artist, how do you use these styles of representation from your culture to try to belong?”

The environment is immersive, and every detail is attended to with expert craftsmanship. The viewer is compelled to socialise, but also drawn into introspection, asking themselves at the artist’s behest: what is home? What is my culture and identity? How do I relate to my past and my community? By asking the audience to interact directly with her work, Calero explodes clichés about Latin American art and culture, inviting the viewer to become part of the process, immersing people in them so fully that they have no choice but to examine their own pre-conceived notions. 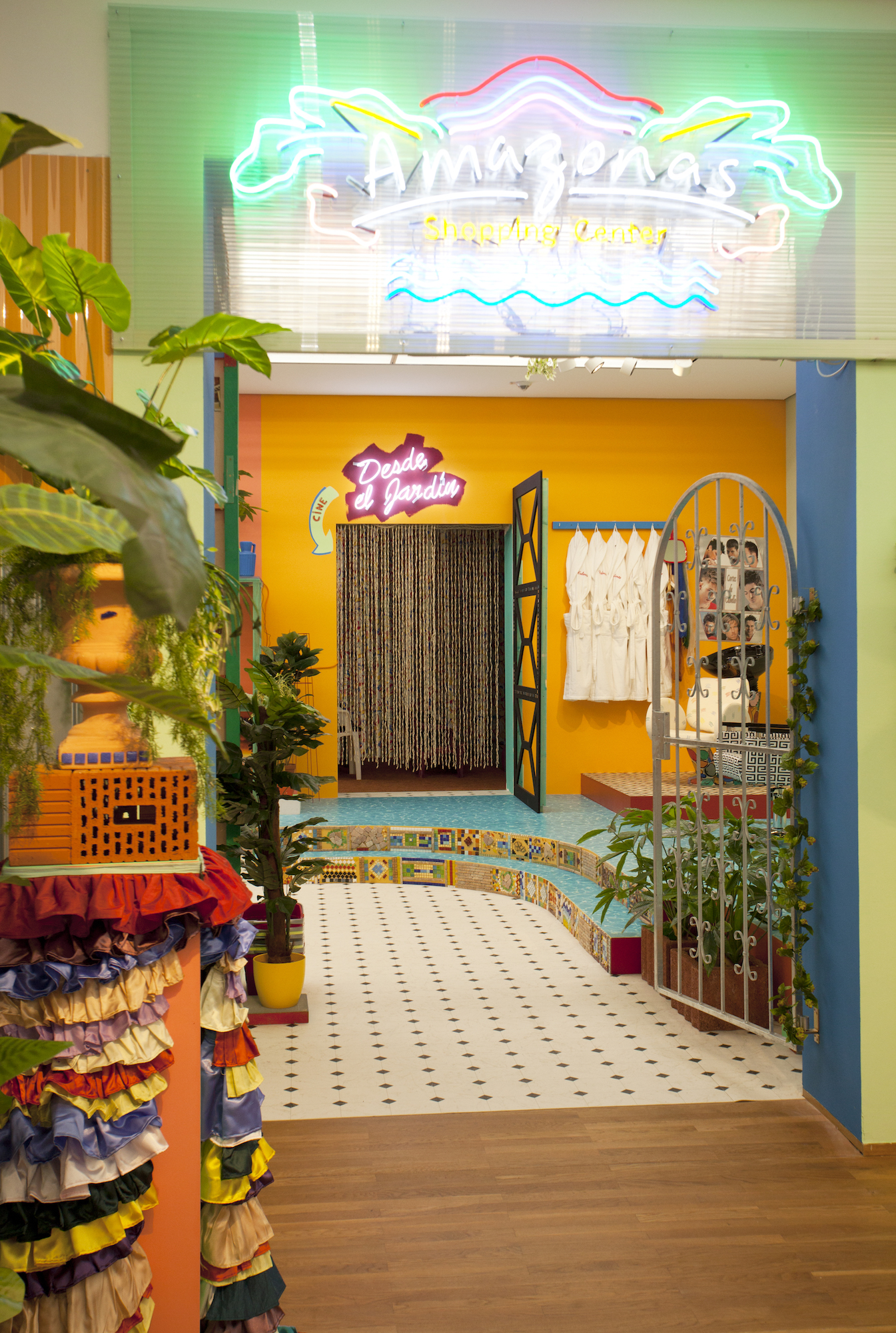 The installation invites the viewer’s participation without being reliant on it. The spaces function beautifully as overwhelming aesthetic experiences as much as stage sets for the performance of community. It quickly becomes clear that the whimsical installation grapples with more complex issues than are evident at a first glance, including how and under what circumstances we find ourselves truly ‘at home’. There’s a sorrow to Calero as she speaks about it, an understanding that, due to the current climate in Venezuela, rather than trying to recreate a home, she’s memorializing one that may already be gone: “The more devastating things become, the more these communities are lost, the more this becomes a more utopian vision of what it used to be, or what we thought it was.”

From the utopian to the poetic, each of the artists asks their audience to ponder complex themes ranging from politics to historicity, institutional critique to environmentalism. The diversity of the work and of the artists themselves is a testament to the thriving art scene here in Berlin, and perhaps forecasts even more prosperous days to come. When asked if the international group reflects the spirit of the city, Manna replies: “Sure, and I think it’s great that they decided to have four women. I wish the world was more often like this; and all women of different backgrounds and colours, so to speak. I think it’s really exciting! It’s good company to be in.”

The winner of the 2017 Preis der Nationalgalerie will be announced on October 20th. The exhibition runs until January 1st, 2018. 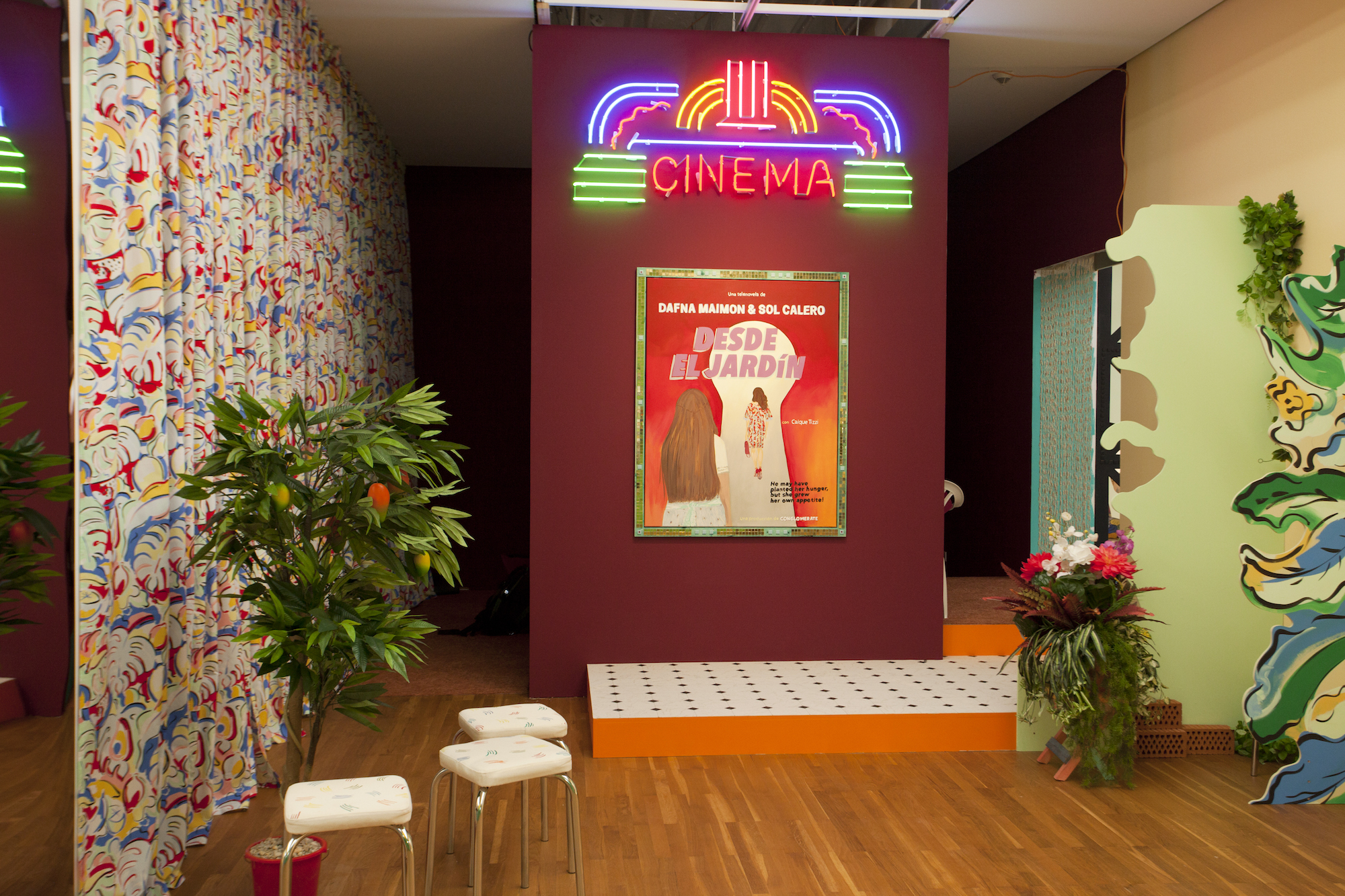