Britta Thie on media, satire, and reinventing the everyday 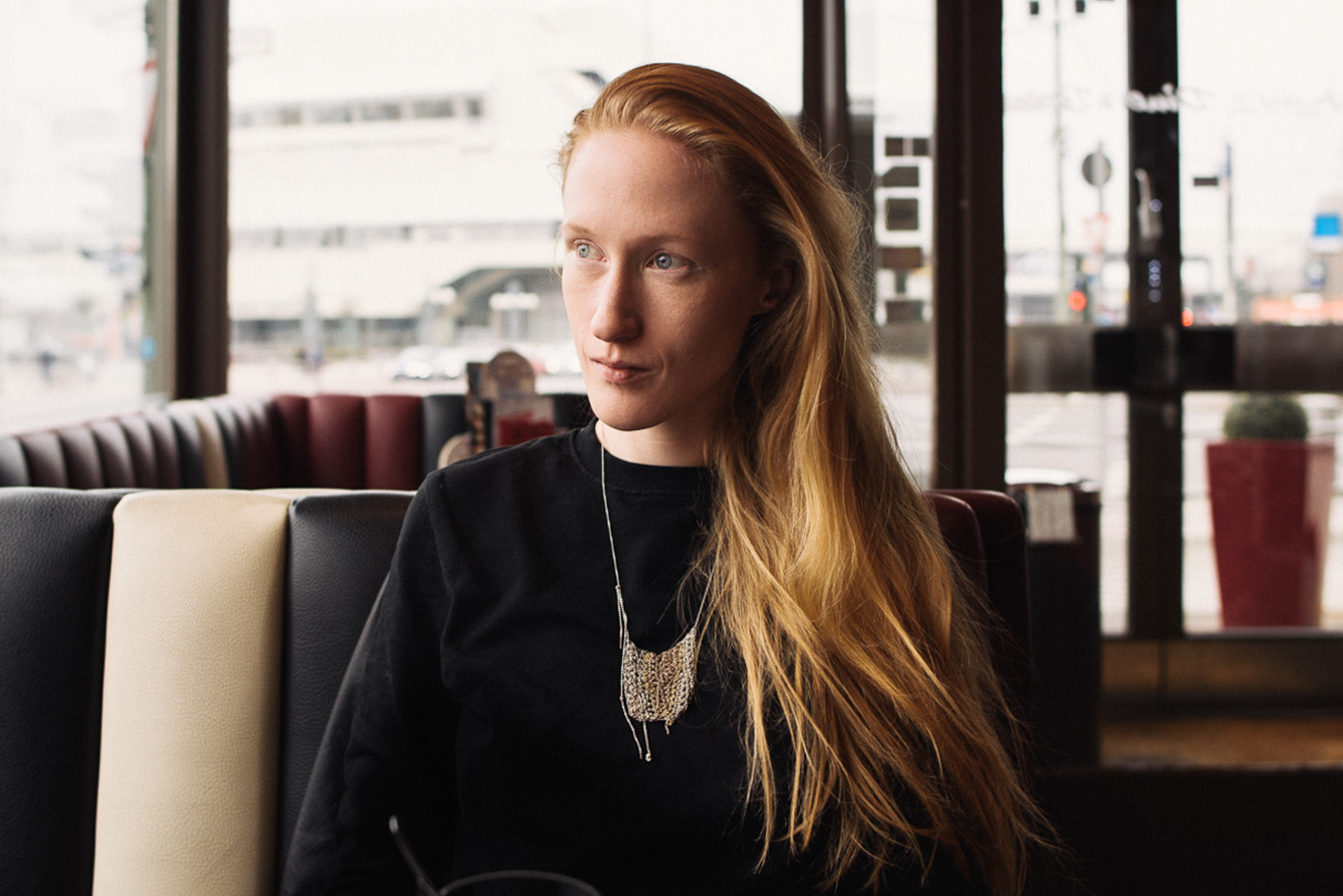 “I actually feel like I’m getting more camera shy now,” Britta Thie tells us. The intonation gives her away – her statement is more of a question, and she leans back, smiling, as she ponders whether what she just said could really be true. For Britta, a filmmaker and director who often appears in her own work, the very idea of being camera shy seems unimaginable.

“It’s weird,” she continues, “but when I used to do the modelling stuff or when I went to art school, it was really competitive. I was equally self conscious, be it walking through the hallway at art school or at a gosee for a runway job. Now that I’m past that point, it’s like that box has been checked, so I just don’t do it anymore. These days, I have my one social media channel, and that’s enough. I feel like I’ve grown out of being exposed in that way.” 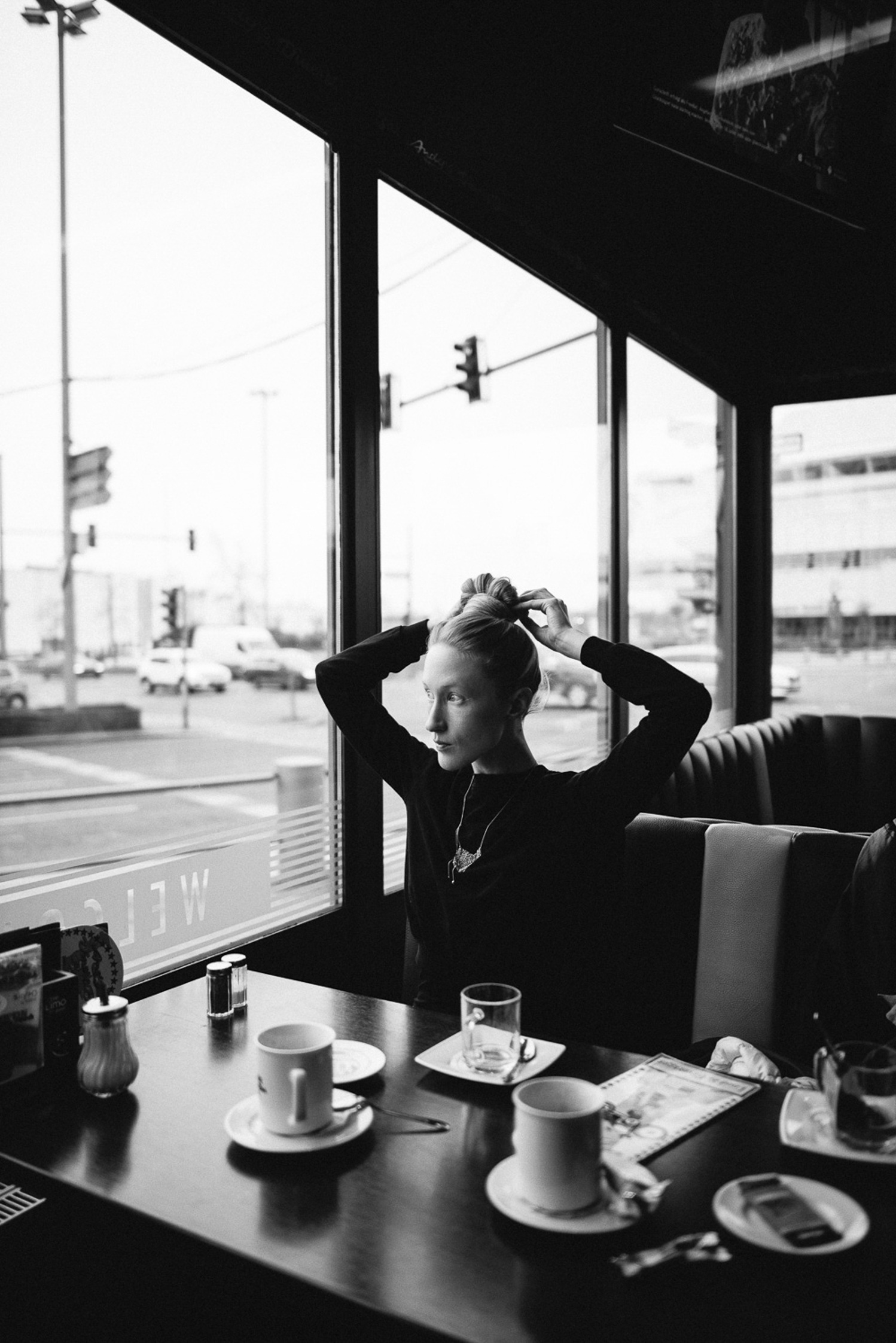 We are sitting in a booth at an American-themed diner in Charlottenburg. Britta moved to Berlin in 2008 to study, and has lived here ever since. We watch as a waiter passes by carrying a tray of hamburgers, each with a tiny American flag stuck in its bun. She smiles: “I love these cheesy American diners.” She pushes her own plate of French fries aside and pulls out her phone, scrolling through her Vimeo page before landing on HI, HD, a three-minute piece comprised of self-made home movies. In one clip, a young Britta with a bowl cut chats with a friend in a mock talk-show interview. In another, she stands outside her childhood home in Minden, Germany, pretending she’s in a nature documentary about trees. “It’s really funny, watching these clips,” she says, grinning as the clip cuts to one of her younger self performing a Cat Stevens cover, “but these were very heavily researched!” She laughs, eyes still on the video. “I did always love to act, but you know, with acting, you run to so many castings and if you’re not lucky that some big director discovers you, then it might never happen for you. That risk I never wanted to take, so I chose to make movies instead.”

When you tell a story to someone about something that happened to you, you always exaggerate certain details.

This kind of self-reflection has been central to Britta’s now decade-long career as a filmmaker, actress and video artist. Her Vimeo page brims with videos similar to HI, HD, often with herself as the subject. In a seven-year-old film, she faces the camera in two side-by-side shots, her strawberry blonde hair pulled tightly back. “Squint,” she calls out in a mock-photographer voice, “Growl. One, two, three. Look here. Squint your eyes.” Her mirror image obliges. In another early piece, Britta’s angular features melt as she edits photos of herself using Photoshop’s liquefy tool. In her videos, Britta’s image, like her self-reflection, becomes masterfully distorted so that we’re unsure which part of her we are really seeing, or if we’re seeing any part at all.

Her 2015 endeavour, Translantics, is perhaps the best example of this. Created, written, directed by, and starring Britta alongside a cast of her friends, Translantics is a six-episode series that focuses on the lives of expats in Berlin and the city’s thriving, if self-indulgent, art scene. The art direction has a somewhat futurist aesthetic, which can be attributed to Britta’s love of science fiction. In it, she plays BB, an artist and model much like herself, but who is, she says, an exaggeration of certain parts of her own character. “BB is kind of this Play-Doh figure I made,” she explains. “When you tell a story to someone about something that happened to you, you always exaggerate certain details. BB is a dispersed version of myself but she’s also much more naïve, clueless, dorky. She is a fictional character – a caricature.” There’s a scene in Translantics where, after being nominated for but failing to win a European Art Award, BB cries. “I would never do that,” Britta laughs. “Well, maybe I would, but it’s more a satire of the secret despair that you have at home. But she does everything publicly.” 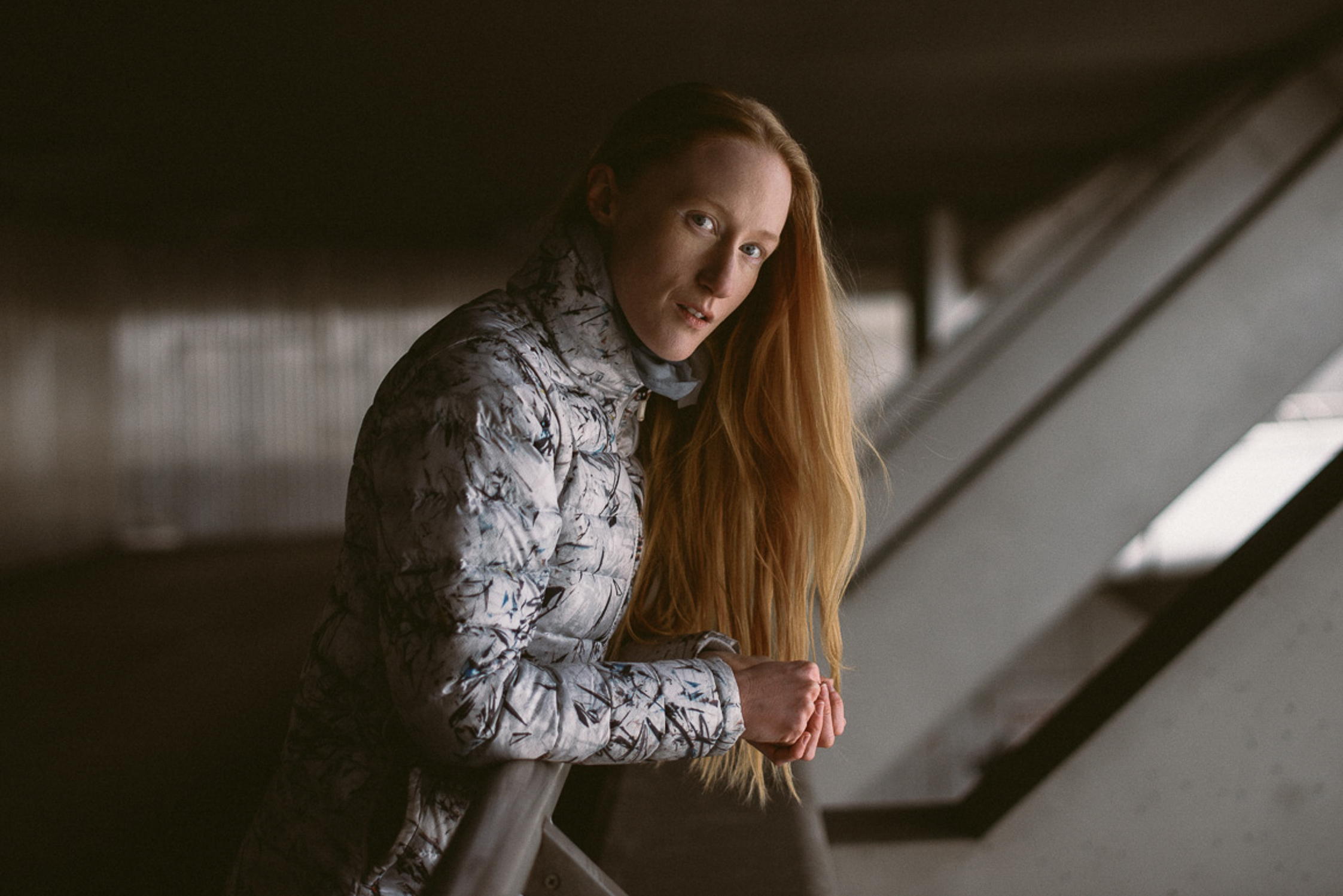 I really got fascinated by just putting cameras up and recording this slice of reality and then copy-pasting it into the here and now, again and again.

Although parts of Translantics can appear to encompass Britta’s reality – a brief glimpse into her world, or, as she puts it, the opening of a Polly Pocket shell – the show itself is more of a commentary on that reality, rather than a representation of it. “I wanted to observe that navel-gazey, narcissistic, selfie generation – that bubble. It’s such a millennial thing, this snowflake phenomenon where, ‘I’m so special, I’m entitled and I have so much to say that I can write a biography about it’,” she says. “I find that pretty annoying, and these days I would make Translantics differently.”

Britta’s new project, The Superhost, treads similar territory, an observation of another self-indulgent trend for young people: Airbnb. The Superhost started as a performance piece in a theatre in Munich, produced in collaboration with actor Preston Chaunsumlit, who also starred in the show. Taking place in an apartment, the piece is based on Chaunsumlit’s experience as an Airbnb host on Manhattan’s Lower East Side and featured a pre-recorded sitcom-style laugh track. “It’s a satirical approach to Preston’s experiences,” she explains. “But it also talks about the commodification of the self, how you sell part of your private space and how even these intimate conversations at the kitchen table that you might have with your Airbnb guests become commodities. You’re selling an experience.” The piece’s on-screen iteration will debut in April 2017, a variation on the same theme shot with two cameras and with improvised dialogue – reality meets fiction meets reality all over again. 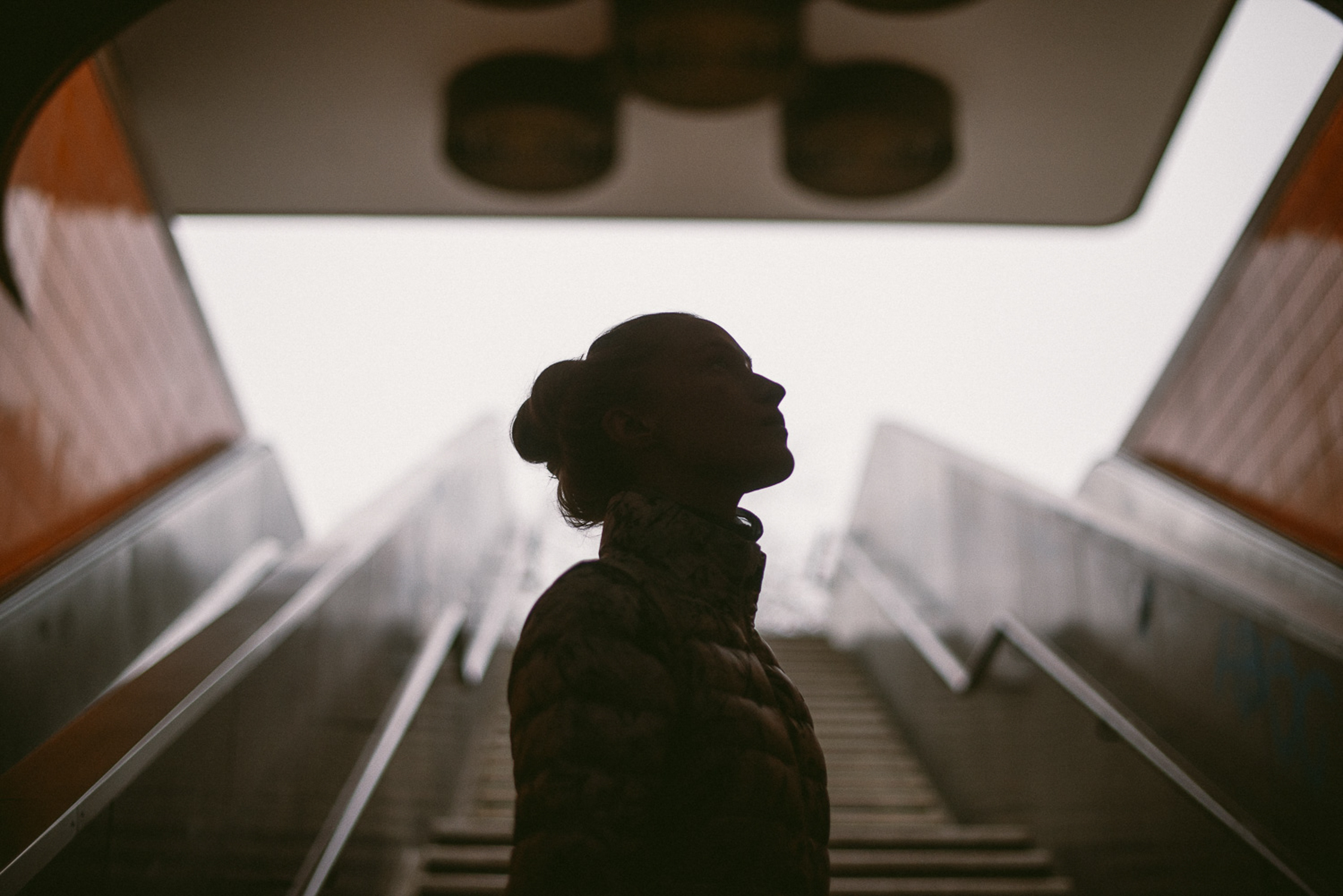 Sometimes reality creates such impossible coincidences that if you write those in a script, they’re not believable, even though they are real.

But the creative process isn’t always easy. “I’m working with a professional film production team on another forthcoming project and I have full freedom, but it is somehow really hard for me to come up with a narrative,” Britta continues. “My fiction has to be very realistic. I’m not good at fantasy stuff. It’s funny because sometimes reality creates such impossible coincidences that if you write those in a script, they’re not believable, even though they are real. You need to shape-shift it a little, and I do find even that can be really hard.” For this reason, Britta tends to work mostly with improvised dialogue, casting friends and actors in equal measure according to the character they embody, rather than their ability to act.

One of Translantics’ most memorable scenes comes in the first episode, when BB wanders through a Media Markt electronics store and comes face to face with herself on a television screen, acting in a commercial for dry shampoo. Like Narcissus, BB becomes enchanted by her own face mirrored back at herself, and tears well up in her eyes as she watches the commercial. “It was actually supposed to be a surreal scene where the commercial isn’t real,” Britta explains. “But that didn’t translate, I guess. In the end, I just gave in to the interpretation that it’s a comment on this completely narcissistic behaviour because I think it’s also a valuable thing.” She shrugs and eats a French fry. 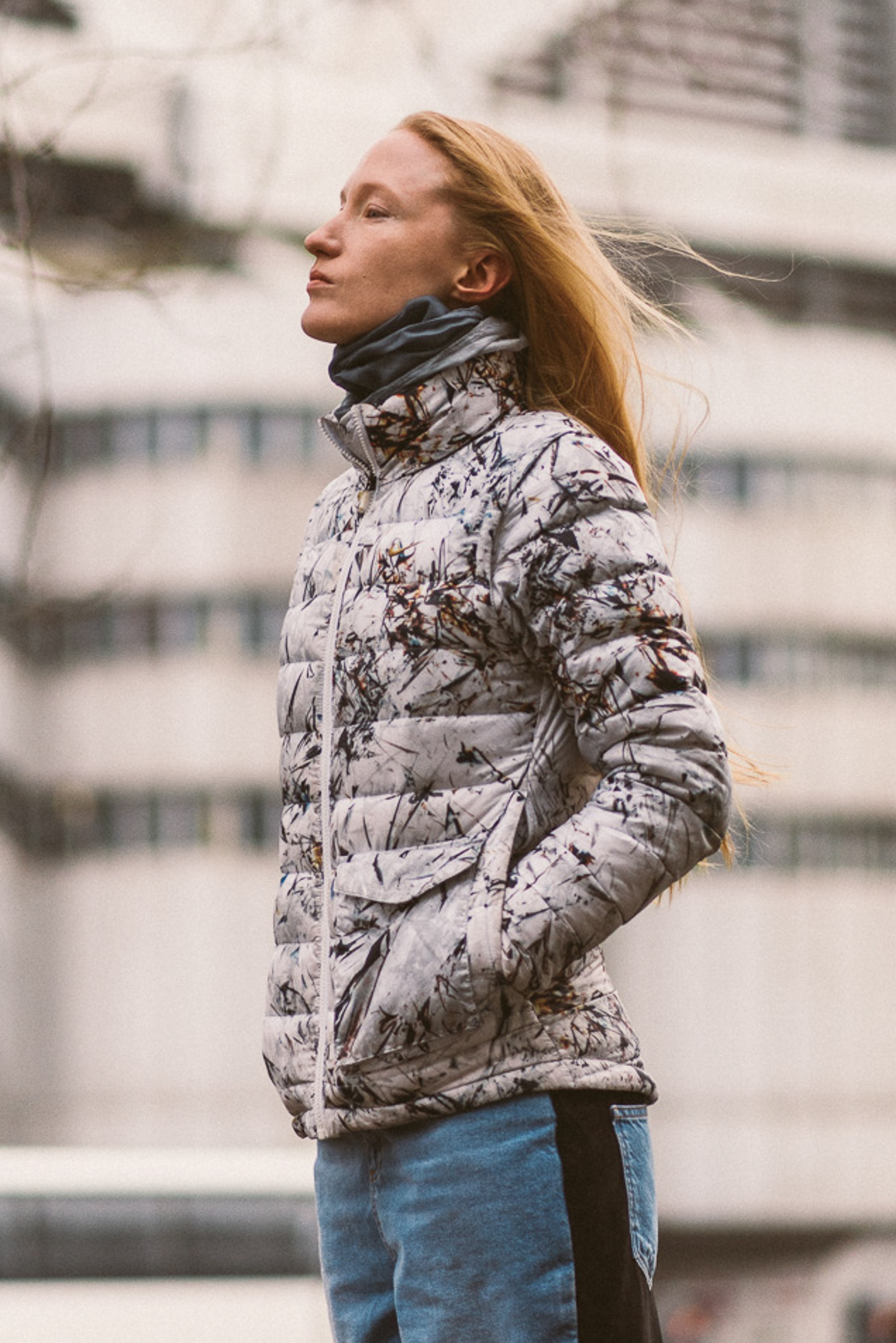 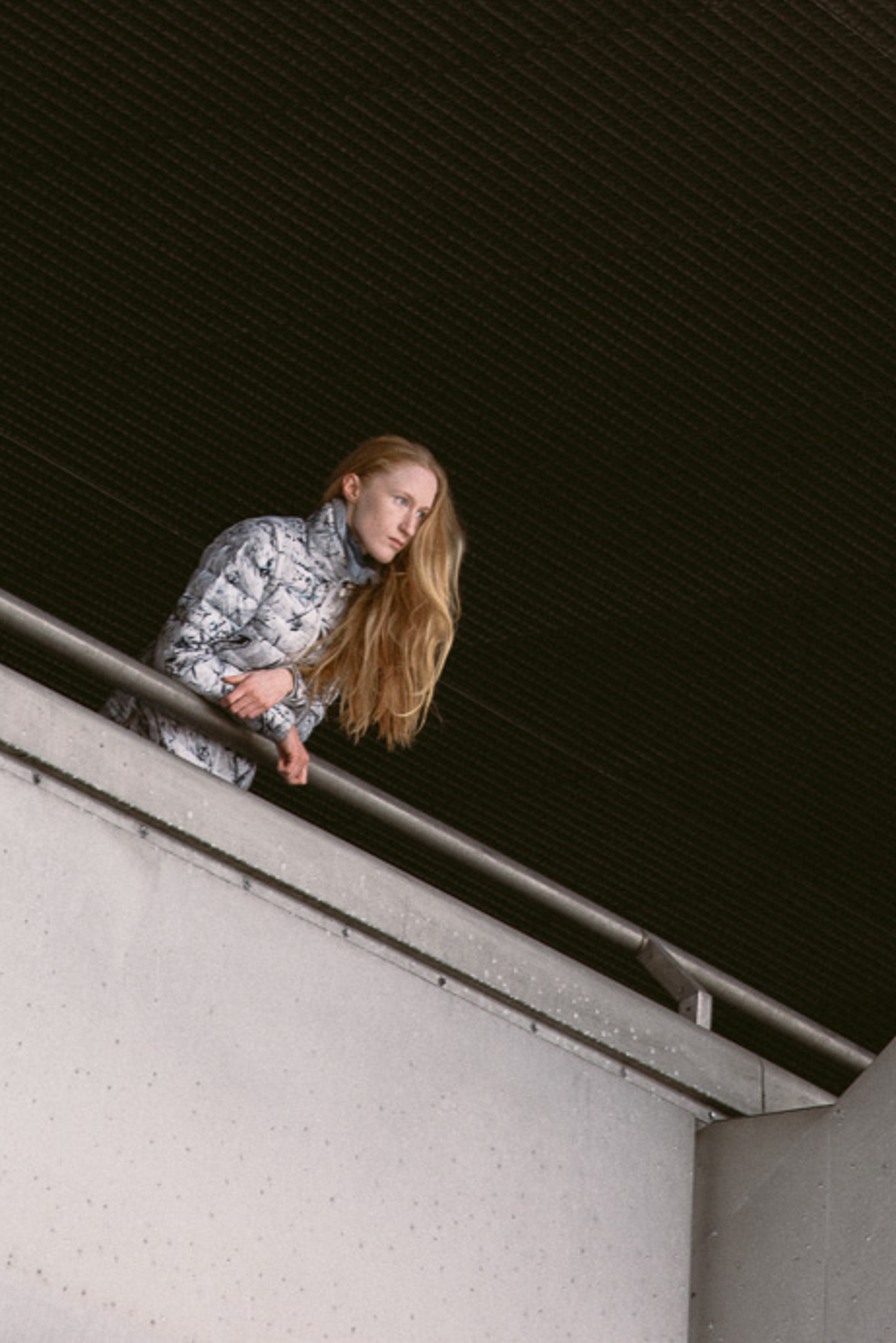 Narcissism, for Britta, goes hand in hand with nostalgia. “There’s this thing that I call ‘digital puberty’. Our generation, we were born in the ‘80s and we grew up in this analogue world,” she begins, “but our hormonal puberty was parallel to the puberty of Western society transitioning from analogue to digital technology. The first chatrooms started becoming popular – we got our first period. We had sex for the first time around when MySpace blew up, things like that. That’s something I wanted to talk about in Translantics, and also in The Superhost. Our lives are so over-edited, like there’s truth, recreated truth, post-truth, nostalgia for our past truths…”

We wonder aloud what Britta is nostalgic for. “I had a rough patch in puberty. I got bullied in high school, I didn’t have a boyfriend until I was 18, I didn’t get my period until late either,” she says quietly but without trepidation. “That type of adolescence where you’re young and pretty and you try things, I never had that. I was a misfit in a way. I kind of tried to paste this image of a teenager onto myself, which I wasn’t yet. I guess sometimes I’m nostalgic for a different teenage life.” As such, Britta’s escape came in the form of art and movies. Her interest piqued with adventure films like Pippi Longstocking and American blockbusters like Jurassic Park; her love of sci-fi burgeoning from Back to the Future and Star Trek. Eventually, she started making her own films. “I think I just loved this rearranging of reality,” she muses. “I really got fascinated by just putting cameras up and recording this slice of reality and then copy-pasting it into the here and now, again and again.” 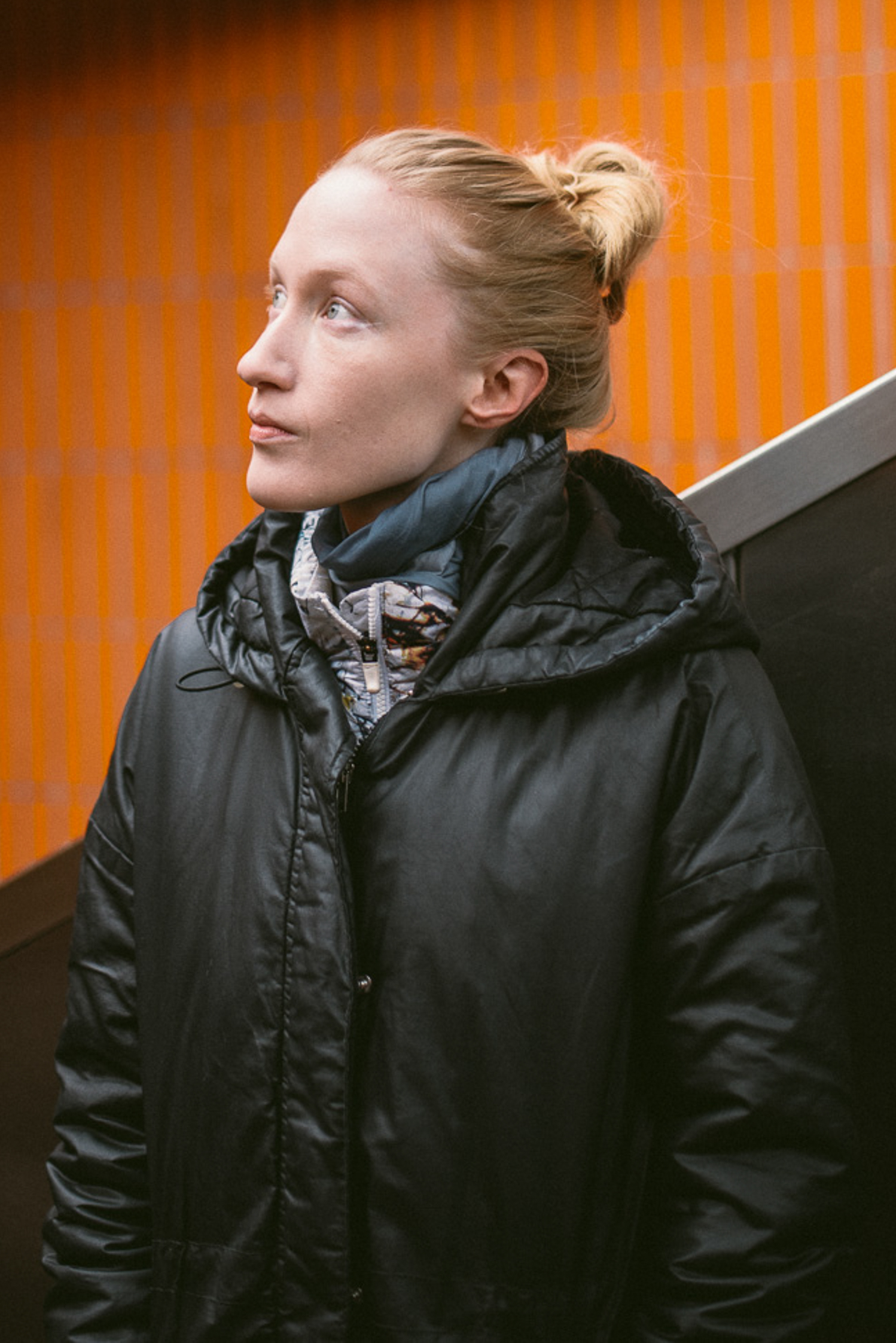 I wanted to observe that navel-gazey, narcissistic, selfie generation – that bubble.

Britta’s first semi-professional on-camera performance was actually her audition tape for art school. The performance took place at a McDonald’s in her hometown of Minden. “I dressed up as the zeit-ghost, the zeitgespenst,” she laughs at the memory. “I was wearing a mask that said feuilleton on it while playing Vivaldi on the piano. I invited all my friends to have dinner and watch the performance. I ate a burger with a knife and fork, there were candles everywhere–” she pauses. “Actually, I should dig that video out, I still have it!”

These days, Britta is also a guest professor at the Offenbach University of Art and Design, balancing her lectures with semi-regular acting work and the production of her own shows and art pieces: “I still love making movies. I love the creation, the observation of reality, I love being behind the scenes, but I also love stepping out of that as an actor and embodying someone else. Maybe you can have a longer career as an artist because you’re always on the creative side, and that’s what I’ve always wanted to do most.” She dips another French fry in mayo and holds it for a moment, contemplating, “But I like both sides of it, so I feel like I’m carving my own category.”

The Superhost will debut in April 26 on ARTE.TV and the-superhost.com. You can watch Britta’s other video projects at vimeo.com/brittathie. 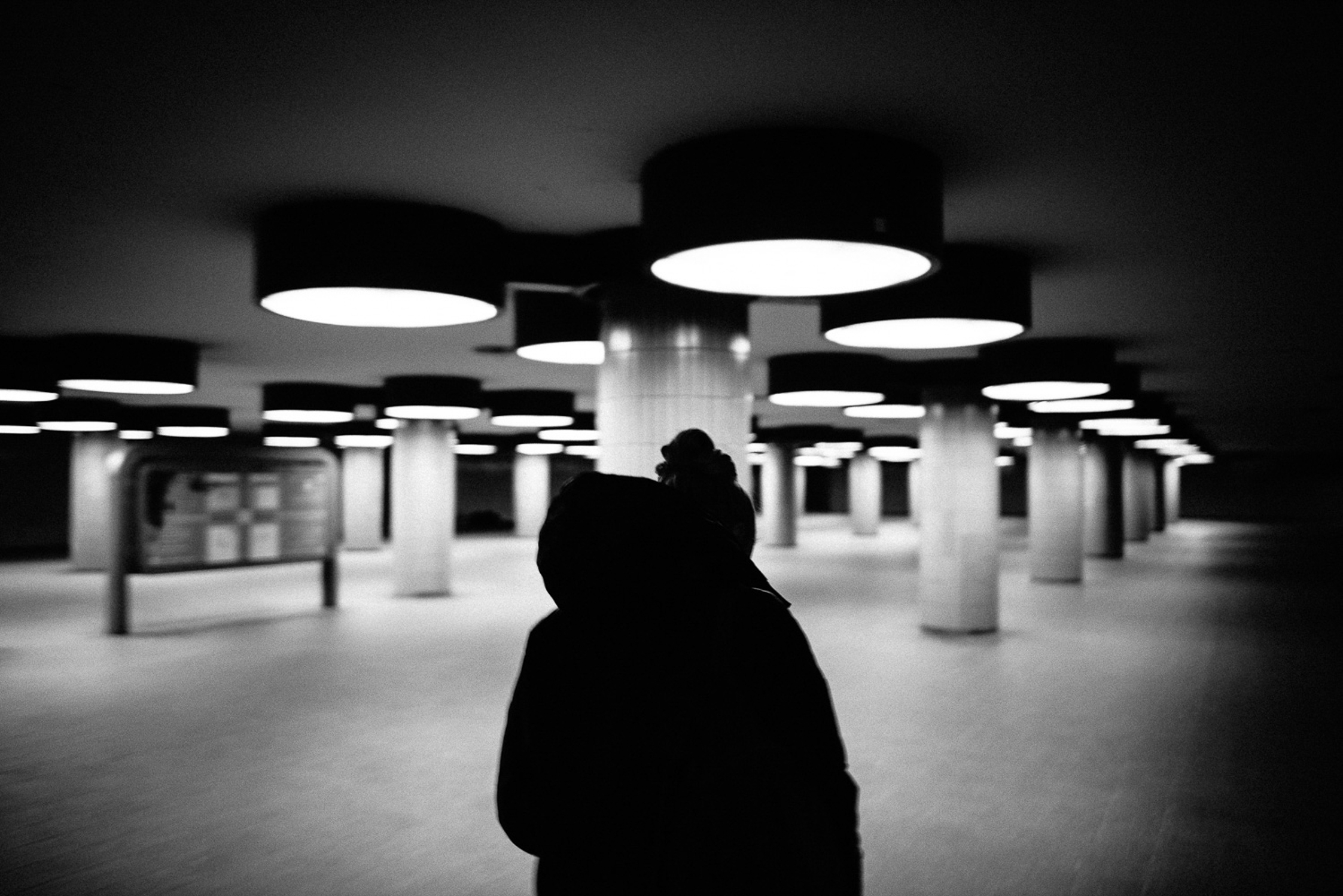