The projekt_k40 and KSBP artistic collaboration that plays with perception 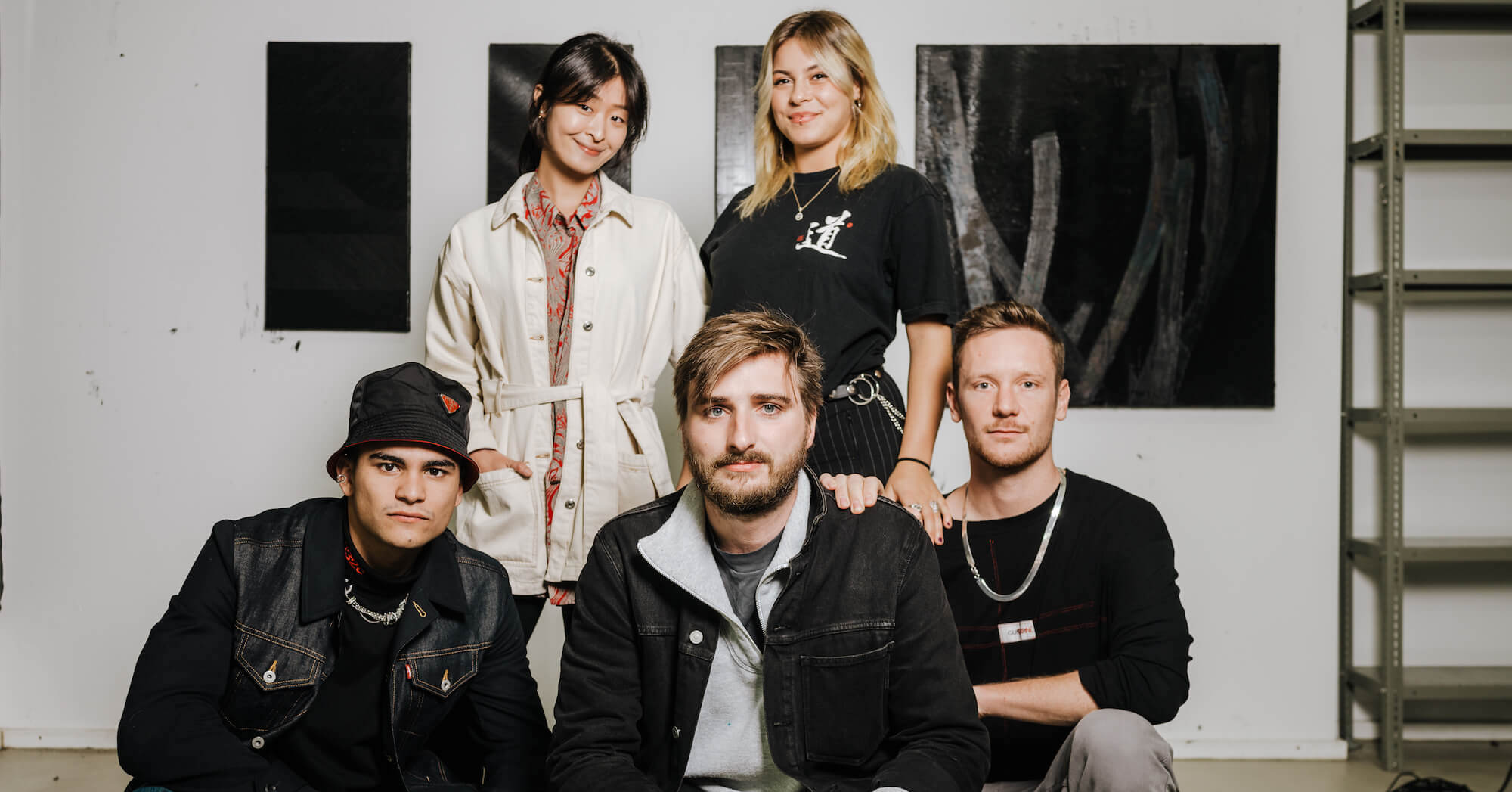 On the surface, the story of projekt_k40 and KSBP sounds all too familiar: an international collective of artists and curators, connections formed on the dancefloor at Berghain, artworks exclusively exploring the colour black, an immersive exhibition experience with ambient techno playing in the background. But an encounter with the artistic pairing of projekt_k40 and KSBP will convert even the cynics. This young, international group seeks to reveal new ways of seeing what is right in front of us.

At the group’s Outrenoir exhibition this summer, held at the Reinbeckhallen, a sense of experimentation and renewal was on full display. Entering the light-flooded hall of a decommissioned industrial space, a row of large-format black rectangles hung on the wall, glinting with subtle colours when viewed from different heights or angles. Around the corner, what first appeared to be a table turned out to be the framework of a machine mounted around a canvas. In its centre, a mechanical paintbrush shuttled across the horizontal surface, spreading thick black paint in pre-programmed patterns. The machine, set to ‘random’, had already coated most of the canvas in paint, but a few spots escaped every time. Visitors fixed their attention on the brush’s trajectory, waiting for the satisfying moment when a patch of white canvas was finally erased. Completed paintings were positioned nearby, all perfectly swirled or scratched impressions of the colour black. 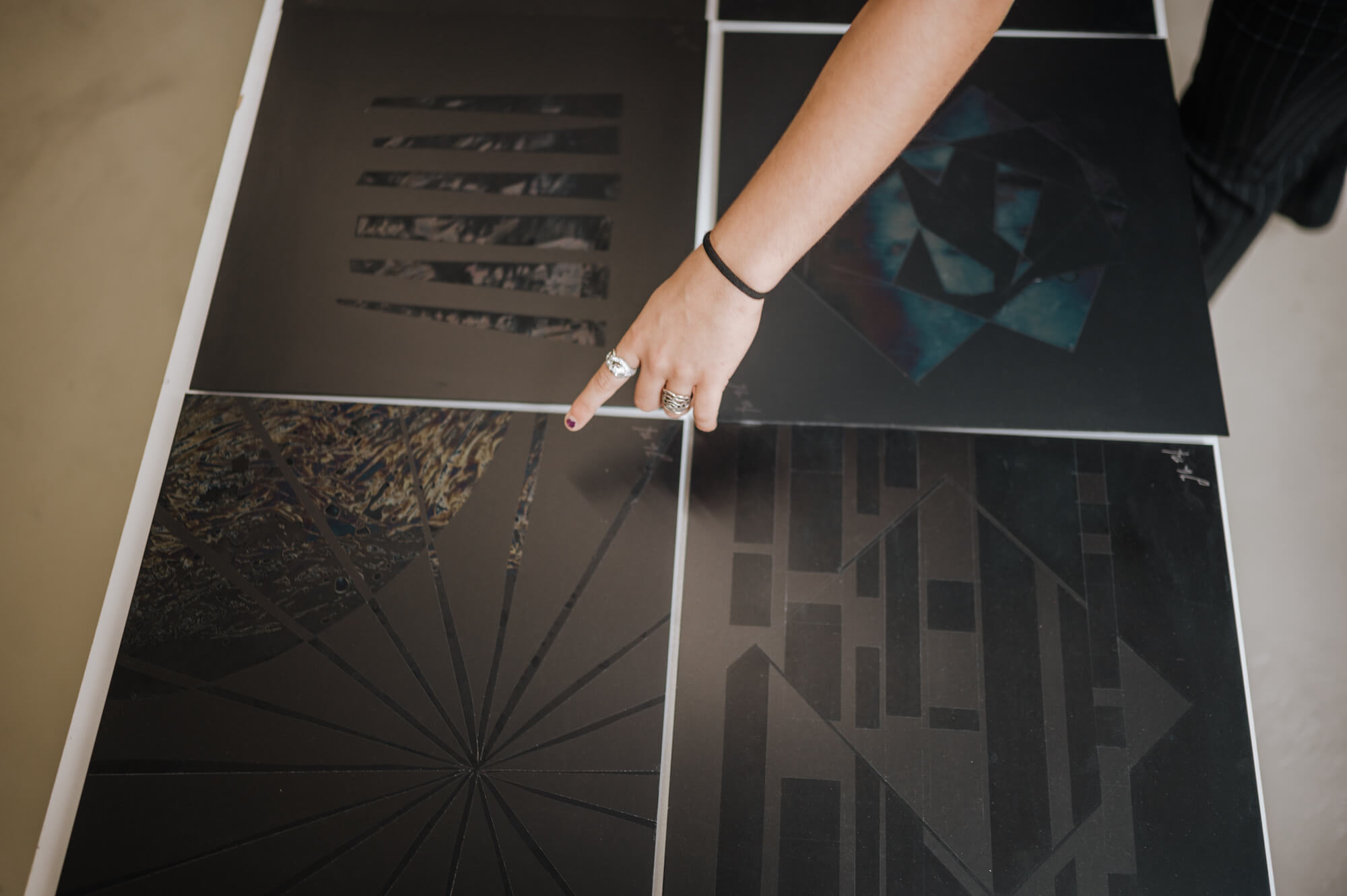 It starts out black, there's nothing on it, and then we bring the colour out. 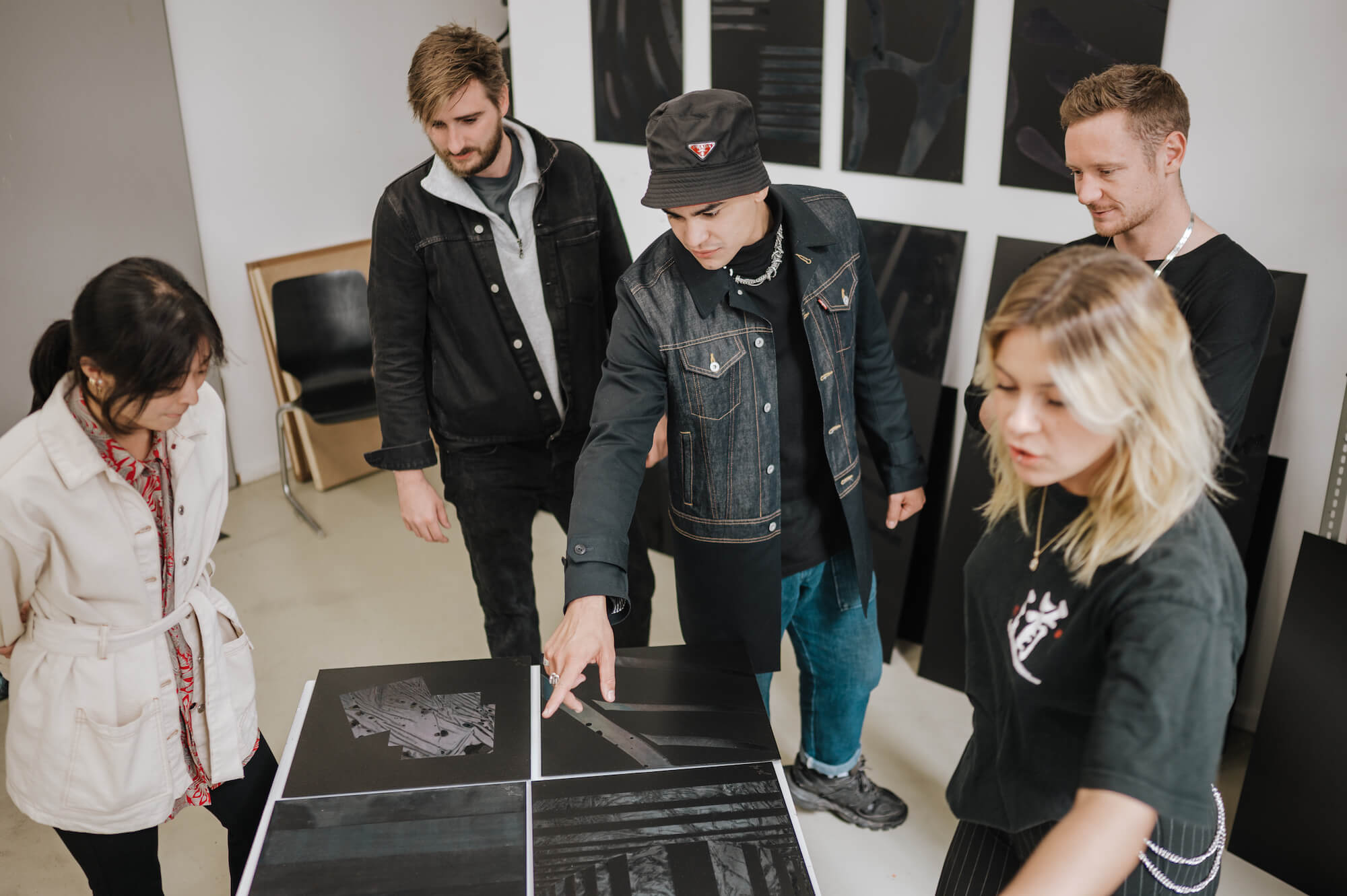 Up in the mezzanine, simple black squares of aluminium hung at approximately eye level, each square marked by splashes of discolouration that were only visible up-close. The DJ flipped through a milk crate full of ambient records on a deck overlooking the exhibition’s main floor, and back downstairs someone was mixing cocktails. Participation, experience, and the way people react to the work were important elements of the exhibition.

Jan Kirchhof is a physicist by day, but with his closely cropped hair and silver jewellery, it’s easier to imagine him running an underground club night than working in the lab. Originally from Kassel, he moved to Berlin several years ago to start his PhD. His laconic confidence masks a rational intellect and deep sense of curiosity. Architect Max Schmidt Alvarez-G. is quieter, reflective, and careful with his words. A Cologne native, he has a German father and a Spanish mother. If Jan plays the role of self-assured Renaissance man, Max is the soulful, critical creative. This unlikely duo of physicist and architect makes up projekt_k40. 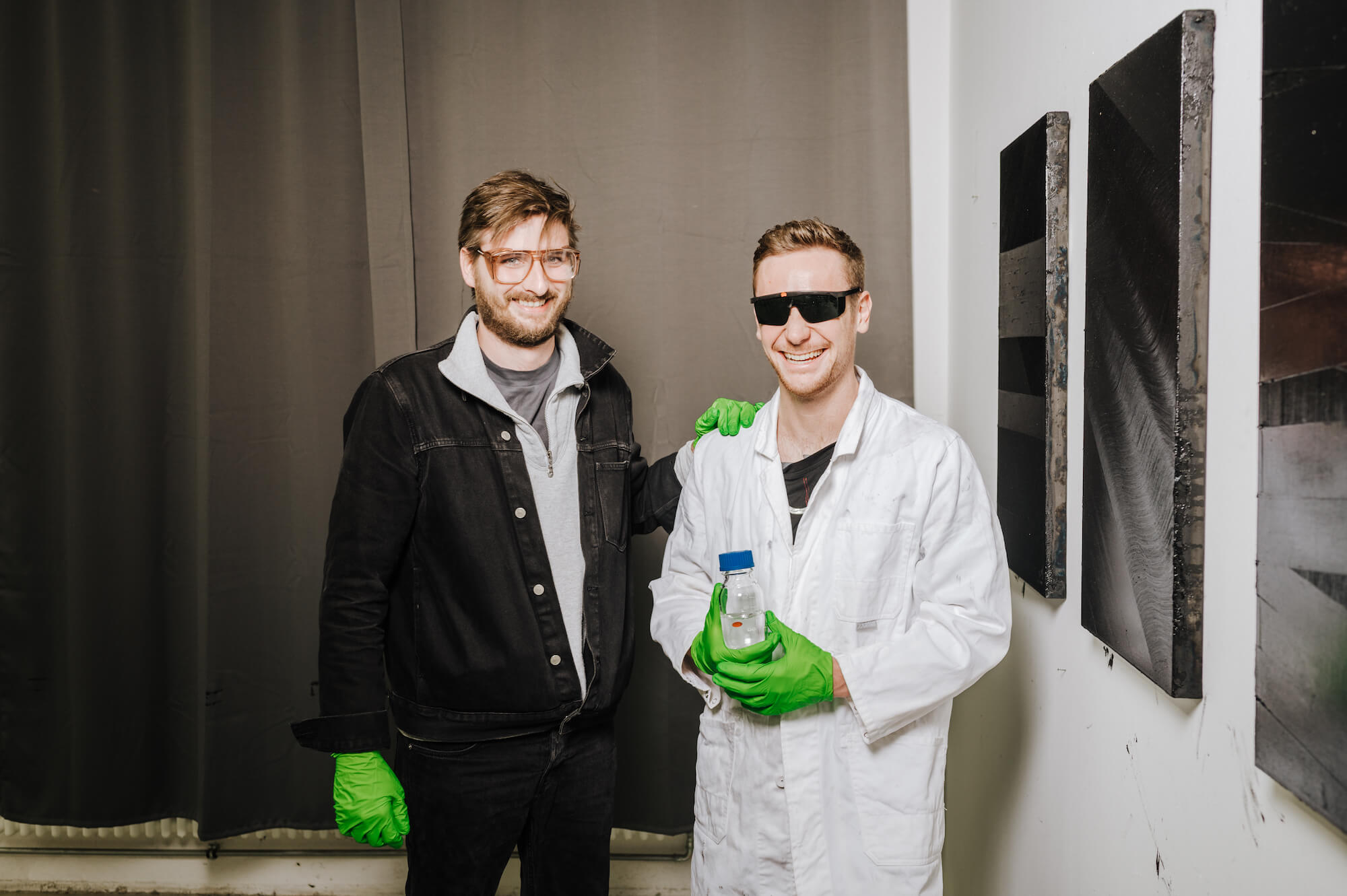 Already friends from their university days in Aachen, Jan and Max formed projekt_k40 in Berlin. The start was unplanned; Jan’s workplace acquired new equipment and he was working on calibrating the machines. “We were testing parameters and checking what you can do with the new lasers,” he says. “It was generating random patterns, super abstract shapes, lines, and squares. And they would go in the trash at night. Instead of throwing them away, I took them home and put them up in my living room.” This connected strongly with Max’s interest in finding mechanical ways to augment and intervene in the physical practice of drawing and painting. “I thought it would be super nice to have an extended arm in your work… To actually extend your arm is to extend your possibilities of working.” The more they explored these possibilities, the more convinced they became that the results shouldn’t stay hidden. In late 2019, projekt_k40 began showing their work in group exhibitions in Berlin and abroad.

Thanks to their participation in a show at Cité de la Mode et du Design in Paris, they encountered another unexpected duo, KSBP (Konzept Seoul Berlin Paris). KSBP was established by curators Tancrède Boualam and Selena Kim. Tancrède comes across equal parts savvy hype man and passionate philosopher – and he’s one of the few people who can make a denim bucket hat look genuinely stylish. His counterpart, Selena, is articulate and reserved yet approachable. She leaves the impression that she is a natural facilitator who both elevates and stabilises whatever project she touches. 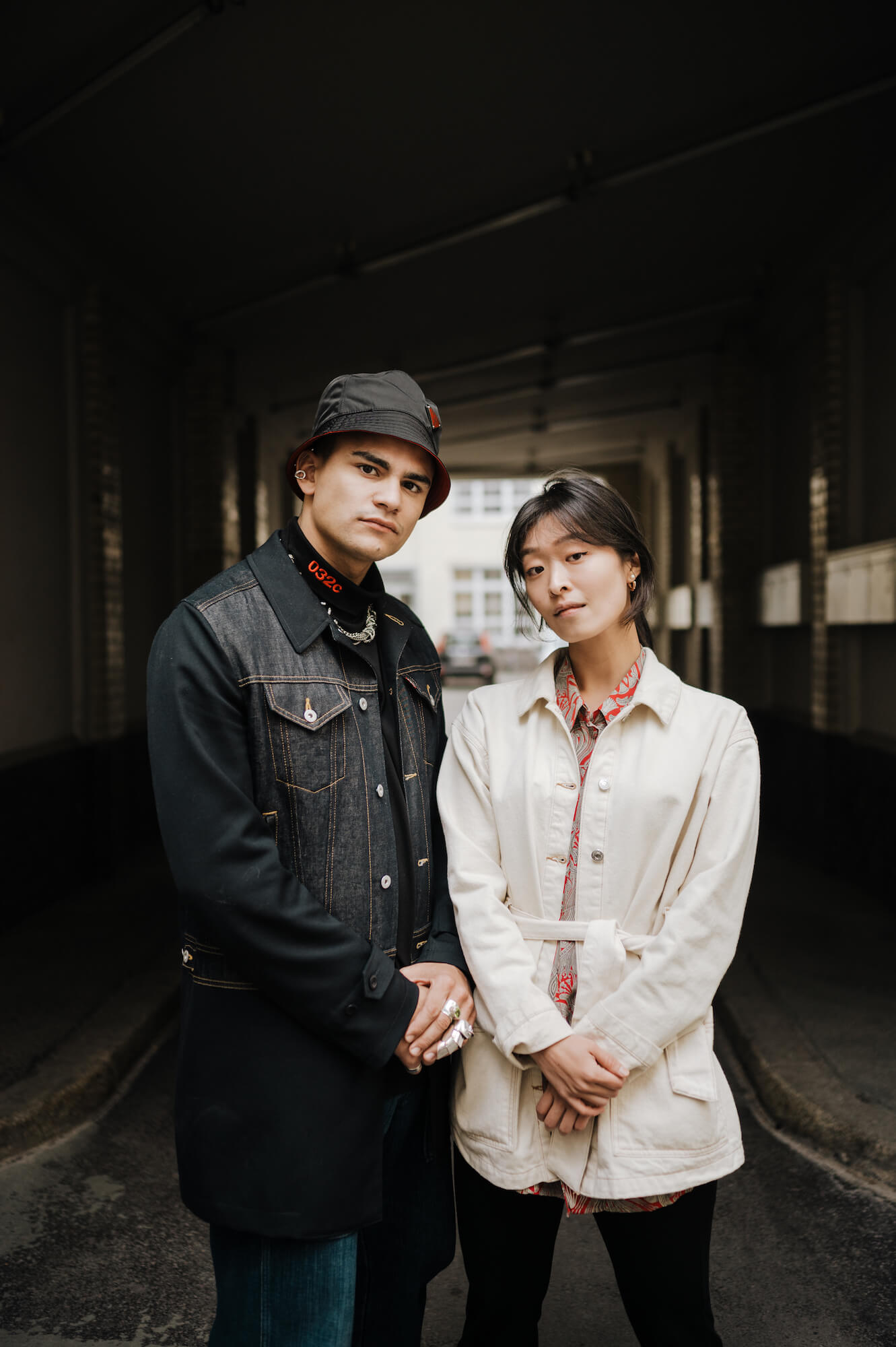 The two met almost by chance. They were introduced through a mutual friend when Tancrède realised that he was already familiar with Selena’s work. “I was in Seoul for a couple of months and I saw her previous project. She produced an art installation linked with a pop-up store. I was extremely inspired by the approach, like mixing different universes through art,” he says. KSBP solidified once Selena relocated to Berlin late last year. “I came here because I found it a lot more diverse and exciting,” she explains. “When I was in Seoul, I was doing more on the commercial side of artwork. Coming here, where people seem to be a bit more willing to get their hands dirty – it was a really refreshing change.”

With influences from all around the world, KSBP’s self-proclaimed philosophy is rooted in identity and innovation. When Tancrède saw projekt_k40’s work in Paris, he quickly came up with the idea to work together as a quartet. He proposed a collaborative project exploring technological innovation in art, paying tribute to renowned French painter Pierre Soulages. 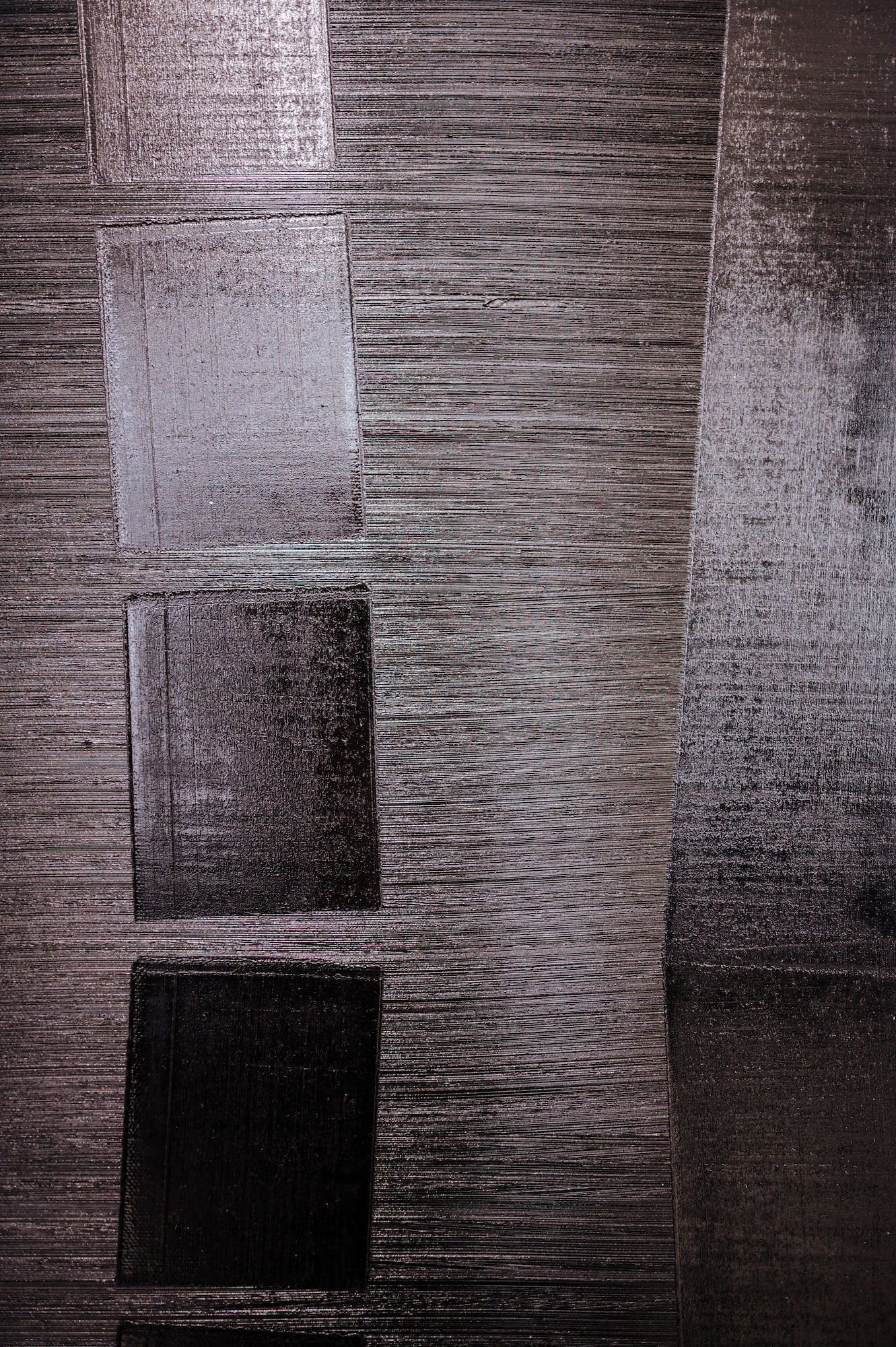 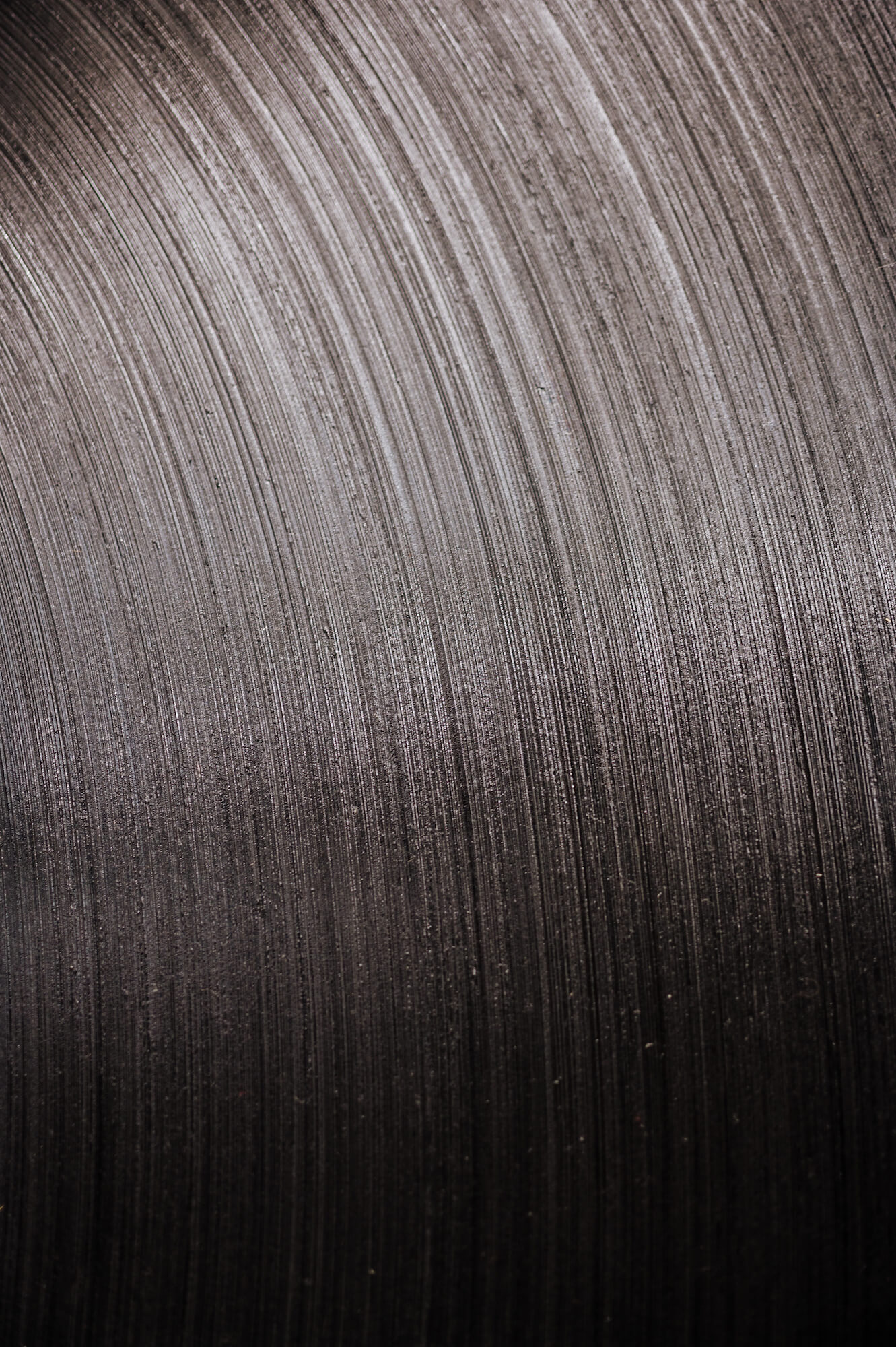 Soulages’ artistic practice is founded in his concept of ‘outrenoir’, which can be loosely translated as ‘beyond black’. While his saturated paintings appear almost completely black, Soulages is concerned with different surfaces and textures and how they reveal the hidden light reflected from blackness. Philosophically, he asks, “What is black?” and perhaps even, “How is black?” Soulages’ challenge to everyday perception resonates with KSBP’s practice, which is concerned with identity and how the self is mediated through interaction with a given environment. Likewise, projekt_k40’s technical innovation connects creatively with Soulages’ refutation of traditional tools, as he is known for applying paint in heavy layers and using a variety of mundane objects to alter the textural surface. Projekt_k40 leaned on this technique for inspiration in their Outrenoir oil paintings, although Tancrède emphasises, “If you do a tribute, it’s really important to renew the way you produce and not do a copy or a reproduction.” The group developed their own process through the use of varied artistic media, like lasers and acid. Even in their oil paintings, they look beyond Soulages and use mechanical means to manoeuvre paint across the canvas.

The collaboration between KSBP and projekt_k40 started to become a reality, brought together by the philosophical underpinnings of Soulages and the concept of outrenoir. Projekt_k40’s structured creative process, drawing on their scientific background, forms the basis for the collaboration’s interest in innovative artistic techniques. “[Projekt_k40] brings a lot of methodology to the creative process,” says Tancrède.

Max and Jan’s process often resembled trial and error, but ultimately reflected the deeper purpose inherent in their work. “When we started with the laser, we put everything on Earth under it to see what would happen. For example, we put mirrors on there and lasered the backside, and this would create nice effects,” Jan recounts. “But in the end, we chose these three series because they match in terms of how they play with light.” Max further explains, “These three topics are actually the main topics of physics and light. It’s all about the perception of the human eye.” 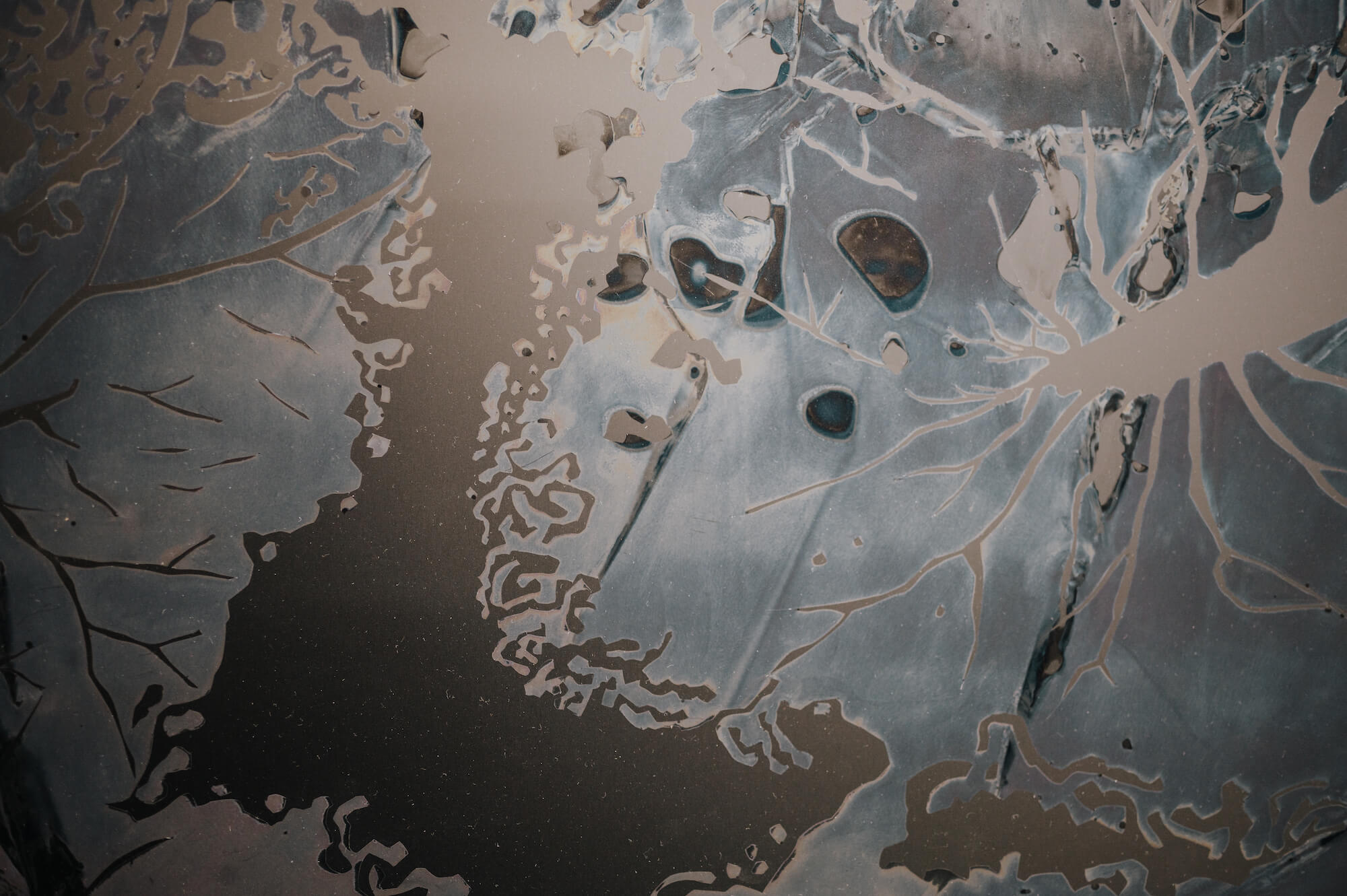 The result of artistically approaching these three scientific topics – interference, reflection, and absorption – is Outrenoir. Each of the three series of artworks featured in the exhibition explore one of these topics through the use of a certain technique or medium: acid, oil, and laser. Oil paint applied mechanically creates differences in surface reflections as the machine brushes in programmed patterns across the canvas. Acid poured onto aluminium attacks the surface, allowing light waves to interfere with each other. And by focusing a laser on coated aluminium, the surface of the material absorbs different amounts of light. This causes the human eye to perceive the surface as black, white, or any of the colours in between. Jan summarises: “It starts out black, there’s nothing on it, and then we bring the colour out.”

At Outrenoir, “the goal was that we wanted people to look at the pieces from different angles and play with them,” Jan says. “People did exactly that. They went close to the laser series to see how they’re made, looking at the oil paintings from all angles to experience the contrast from reflections. If nobody is looking at it, it’s a different piece. It’s not there.”

To encourage visitors to linger and look, every aspect of the exhibition was thoughtfully crafted. The location was chosen for its overhead windows and natural light, which allows the visual experience to change throughout the day with the movement of the sun. The curators worked with Reinbeckhallen to erect new temporary walls, guiding visitors through the space and creating a sense of ‘parkour’. The group also brought events producer Agnese Ghinassi on board to enhance the overall atmosphere. She remembers, “We ended up having a set of ambient music every day. Some guys also used our setup to record some podcasts. It got to be a creative space for everybody.” Notably, DJs Dasha Rush and Flavia designed tailored sets for the vernissage and finissage, conceptually inspired by the artworks. 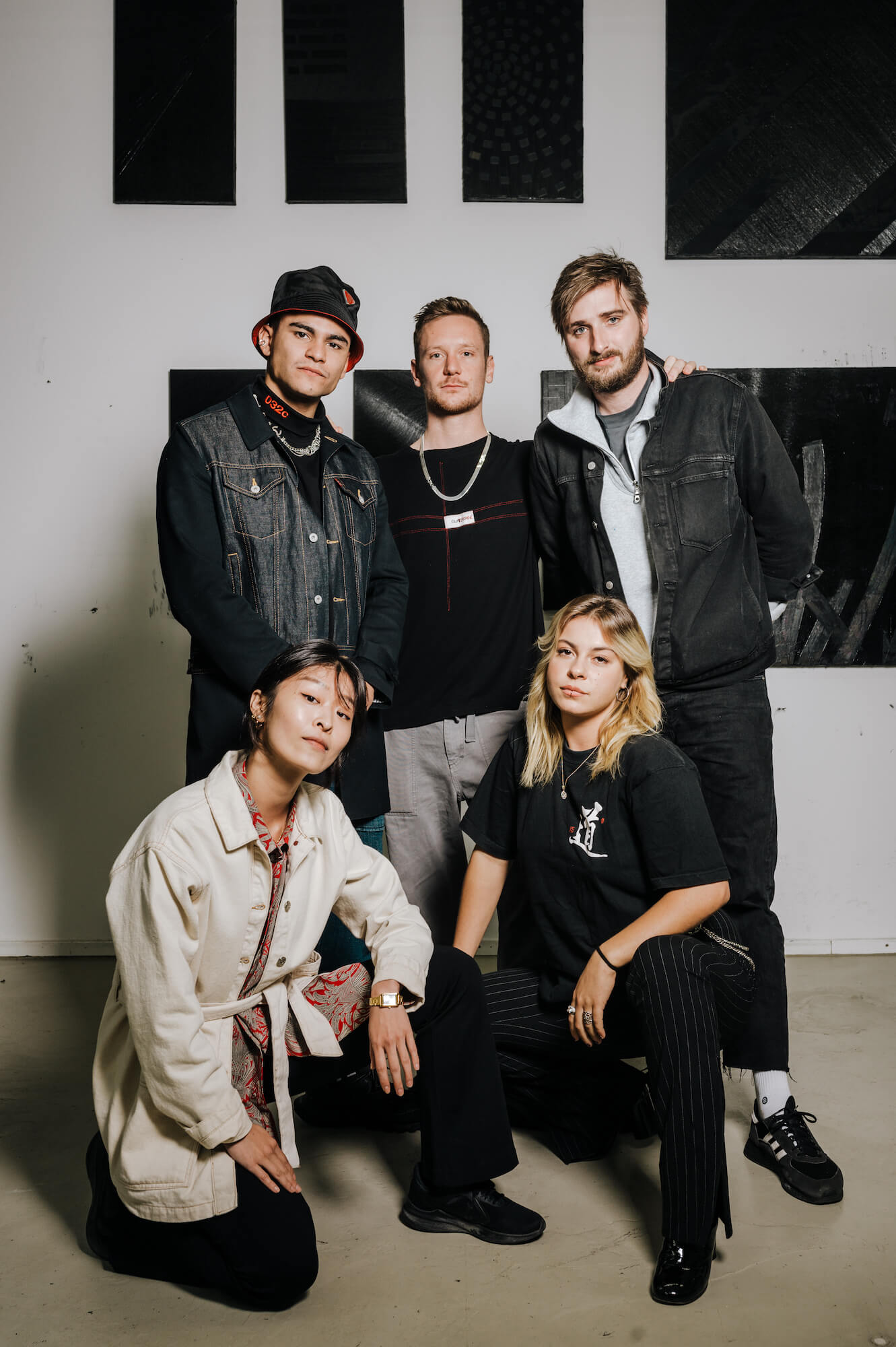 Through a collaborative approach, everyone brings more than themselves and you create something that's beyond all of us.

The collaboration and shared experience between projekt_k40 and KSBP also built a creative space that enabled each duo to stretch themselves. “How often do you get introduced to someone halfway across the world that shares the same interests and a similar vision with you?” Selena asks. “You bring such different things, you complement each other.” Tancrède adds, “I really appreciate their work and I really feel elevated when I work with them.” Jan also acknowledges how valuable this expressive collaboration is. “For me, I definitely need it. During the daytime, I use one side of my brain too much. I need some artistic or creative outlet.” Through working with this group, there is “a lot of trust as well. It’s a different process from when you make art all by yourself.”

While a physicist, an architect, and two art producers don’t sound like the most likely quartet to create artworks that feel deeply humanist, the sum seems to be greater than its parts. Despite being ravaged by acid and lasers, their works are both delicate and gentle. Even though oil paint has been applied by a brush-wielding machine instead of a human hand, the canvases aren’t sterile or harsh. Projekt_k40 and KSBP’s Outrenoir tribute works to convince us that black is more than just black and that visual perception is only as true as the physics that allow us to see what we think we see. Selena reflects, “Through a collaborative approach, everyone brings more than themselves and you create something that’s beyond all of us. It developed in a way that I actually didn’t expect it to. But in a good way.” 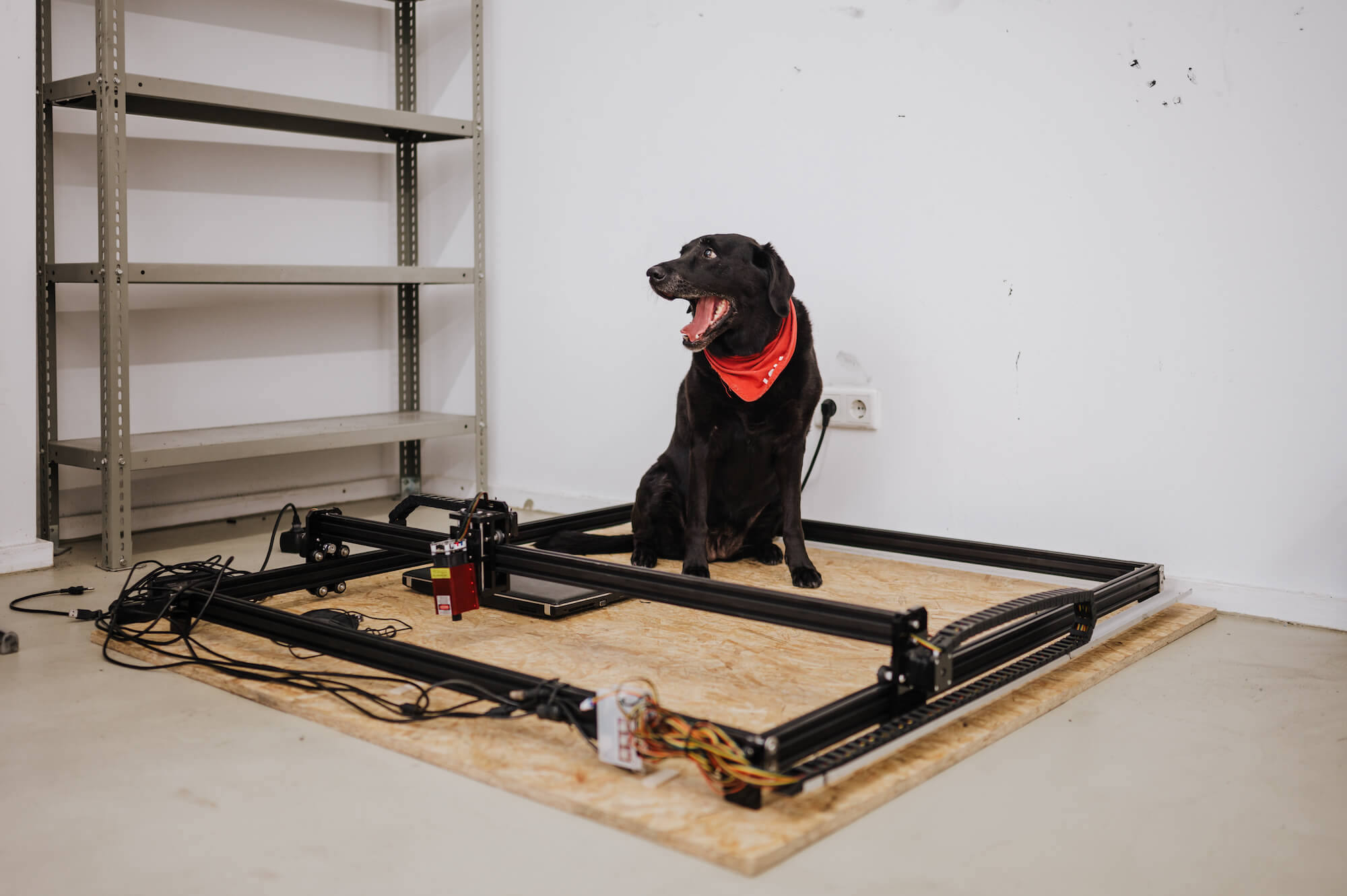