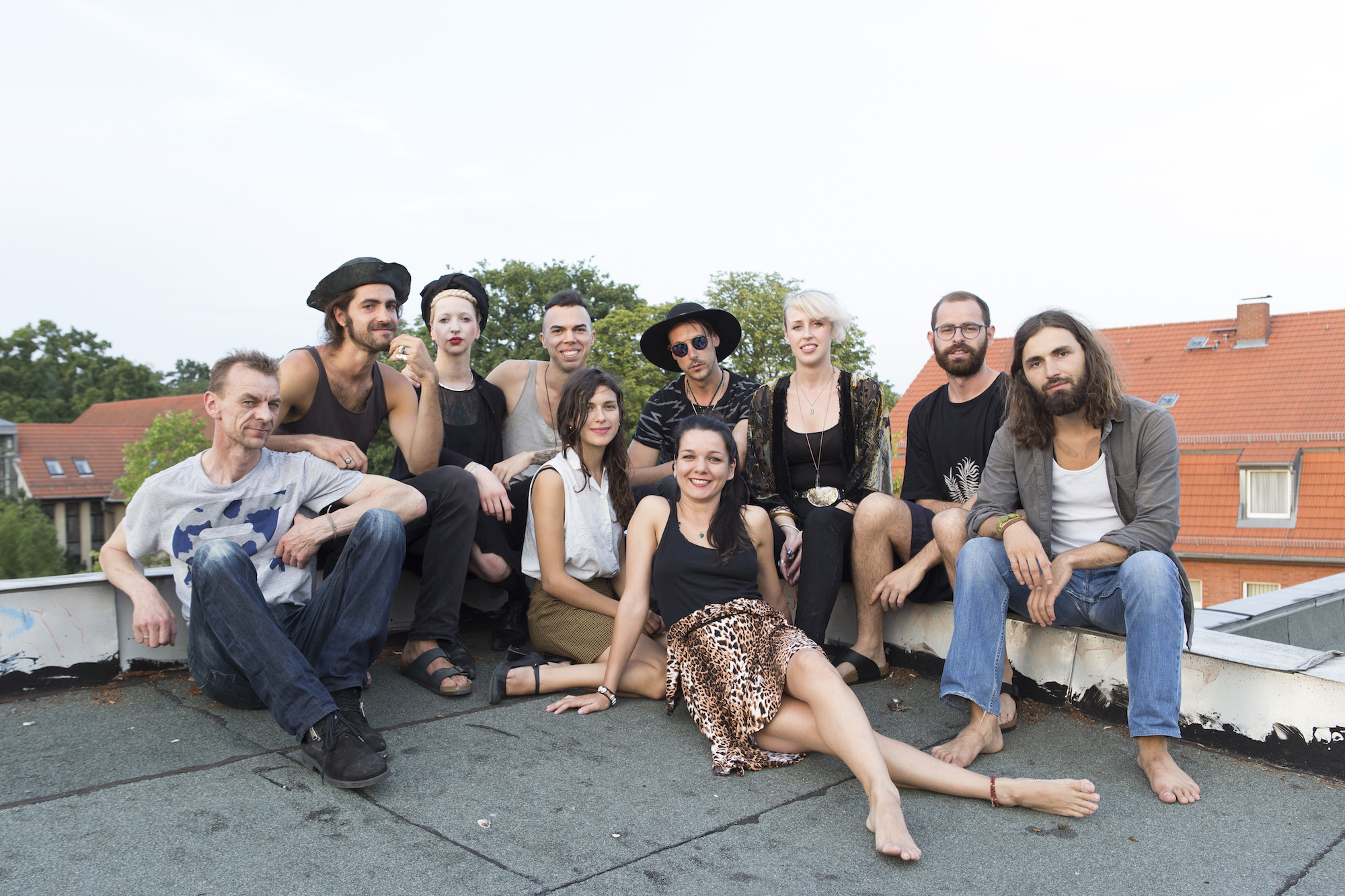 On first glance, Weißensee may look like the place where the young and hip – tired of the tourist trap that has become their favourite coffee roaster, or the listless stupor of a post-Berghain Sunday – go to quietly start families and settle themselves into a routine, saving their celebrations for summer BBQs and ‘Spargelzeit’. But Weißensee, though undoubtedly giving off a small town vibe, ought not be dismissed as another small East German district.

Located just north of Prenzlauer Berg and just ten minutes by tram from Alexanderplatz, Weißensee is home to both the Kunsthochschule (the Berlin Weißensee School of Art), and the Weißensee Kreativstadt (the ECC), the self-proclaimed largest gallery in Berlin with over 350 national and international artists occupying studios on the premises. And of course there’s the Weißensee itself, an impressive lake perfect for swimming, sun bathing, and enjoying the quiet of semi-suburban life. But, believe it or not, Weißensee has even more treasures to behold. Tucked away on a residential street, you’ll find the Kunstlerhaus Parkstraße, an international group of ten artists who are reimagining the picturesque suburban dream with their radical model of collective living. We show up at Kunstlerhaus Parkstraße early in the evening to a welcome sign, a donation box, and the door wide open. Leo, one of the two founders of the space who we had arranged to meet, appears to be running late. Eventually a young man emerges, and he warmly welcomes us inside. Andreas (Andy), who quickly introduces himself, looks as though he’s stepped directly out of the 1970s – bearded with long brown hair and faded flared jeans. In fact, it’s as if the entire place is from another time, or rather, confluences of many different moments, both historical and yet to come. The ‘kitchen’ which doubles as a bar, has tinsel garlands hanging from every imaginable surface and is covered in strange ferns, bizarre Victorian furniture and, of course, a disco ball. “Are you staying for the band tonight? It’s gonna be great.” Andy asks, the light from the disco ball dancing across his face. A band is set to play at 8pm, which explains the relative stress of the house’s inhabitants. Pretty young girls in summery dresses begin to waft in like fairies bearing massive bouquets of flowers, a few wearing some in their hair. Finally Leo, a young Italian–German painter sporting something of a pirate hat, arrived with the drinks and begins to chat to us as he unloads them into ice buckets. Once he finishes we are ready for a tour. 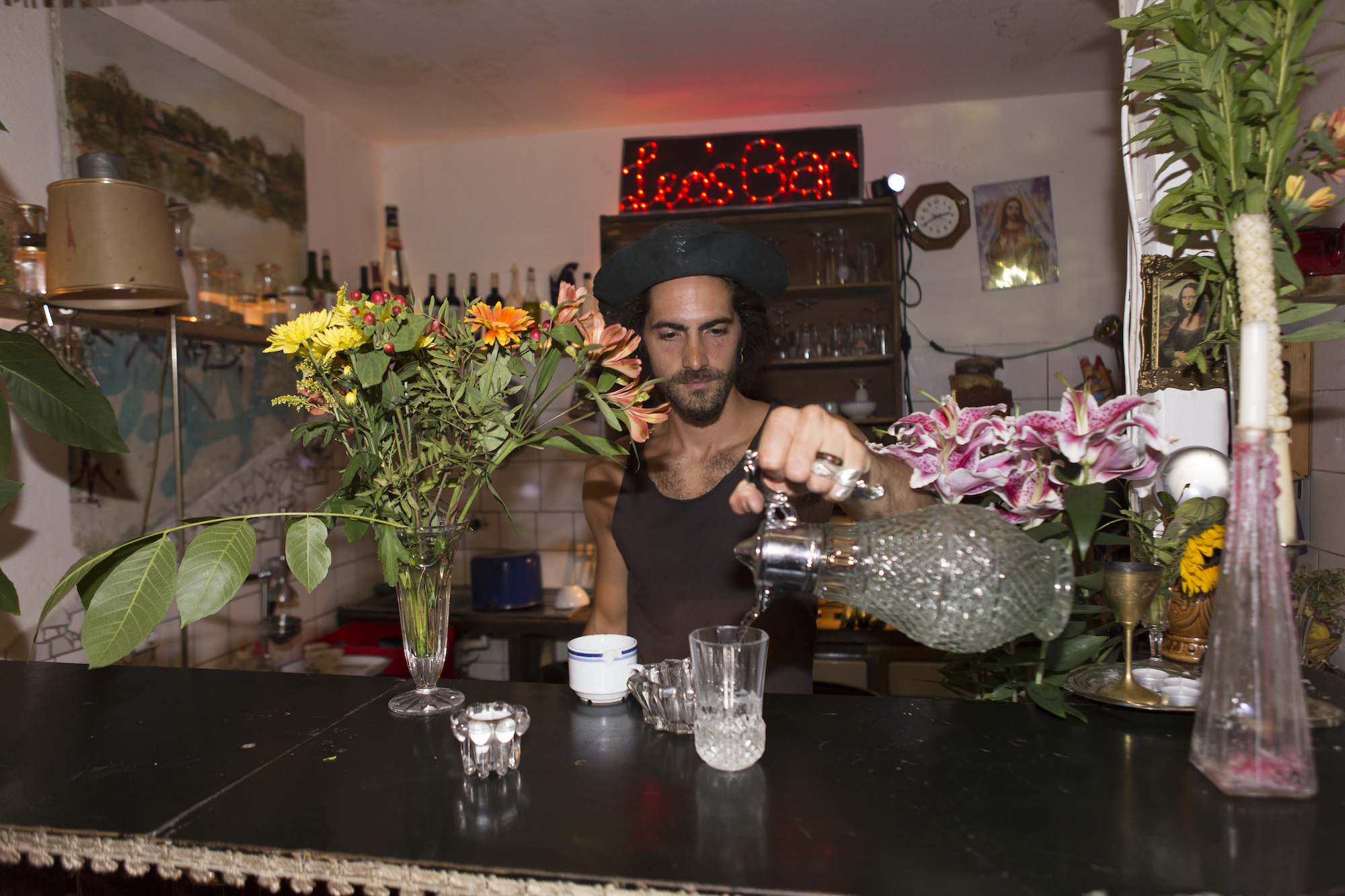 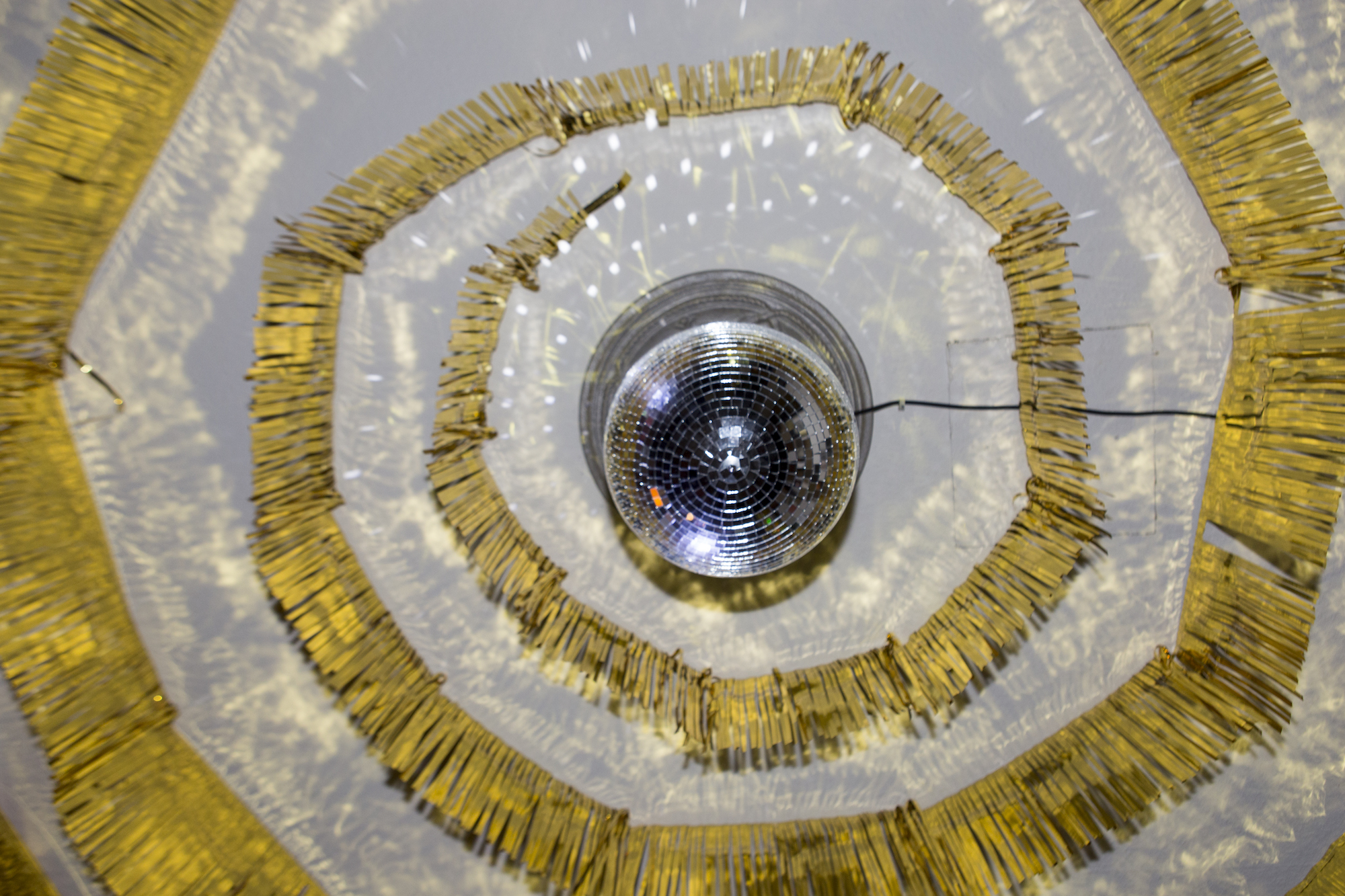 “This is my room,” he explains, leading us into the space just next to the kitchen/bar/gazebo. It doesn’t look like a bedroom, but rather like a living room or an art studio, with lush oil paintings adorning the walls, and a piano featured prominently in the centre, which Andy (a musician by trade) promptly begins to play. The room had been rearranged for the band that night, who are expected soon to set up. We continue the tour, past the fern-laden bathroom, through a hallway covered in tiny antique frames bearing photos of what look like post-mortem daguerreotypes from the 19th century, work from one of the house’s many inhabitants. On the second floor we find Jody, a designer from Devon, UK, and we learn more about the birth of the Kunstlerhaus. Leo and he had met at the ECC several years ago, but found that the space wasn’t really right for them. They stumbled upon this abandoned house, contacted the owner, organised the rent and set about filling the rooms. Jody’s room looks a bit like a designer shop with a twist: cabin-style wooden tables, stylish lamps with round paper globes. “Berlin just gives materials,” he explains. “We get in the van and we just fill the fan with wood, and then we make tables and sell them. It’s to keep this project running. Sometimes Leo needs funds, or we’re short on something, so we make a table. I get an order every three days just from word of mouth.” It’s then that he informs us that the lamps are actually made of toilet paper, which is around when we notice an elaborate chandelier made of tampons hanging from the ceiling: “We have creative sessions, so people who want to be creative come, and we just have fun and produce these products.” They’re hoping for a showroom, but for now they’re happy working from their place as long as they have it. 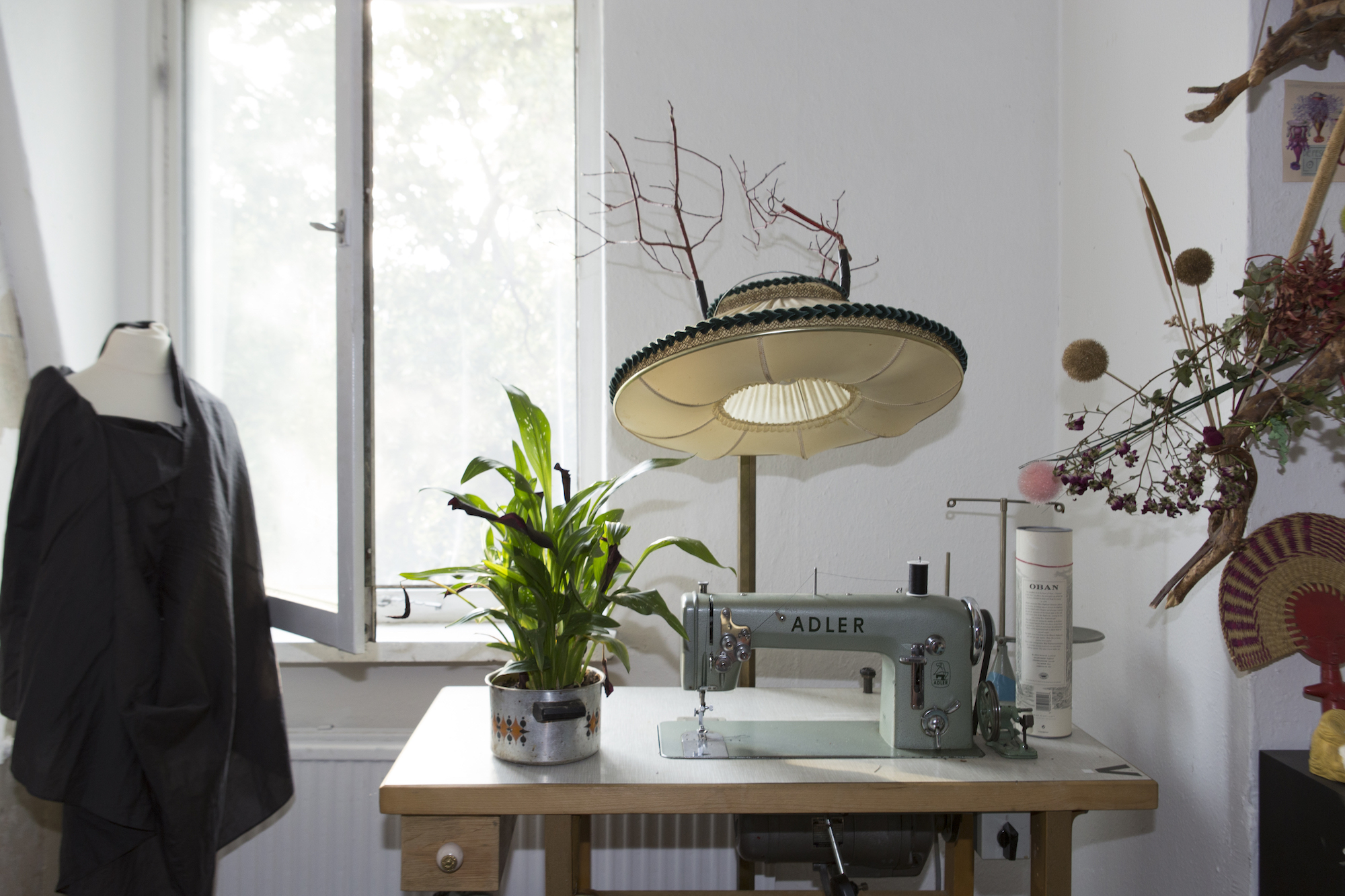 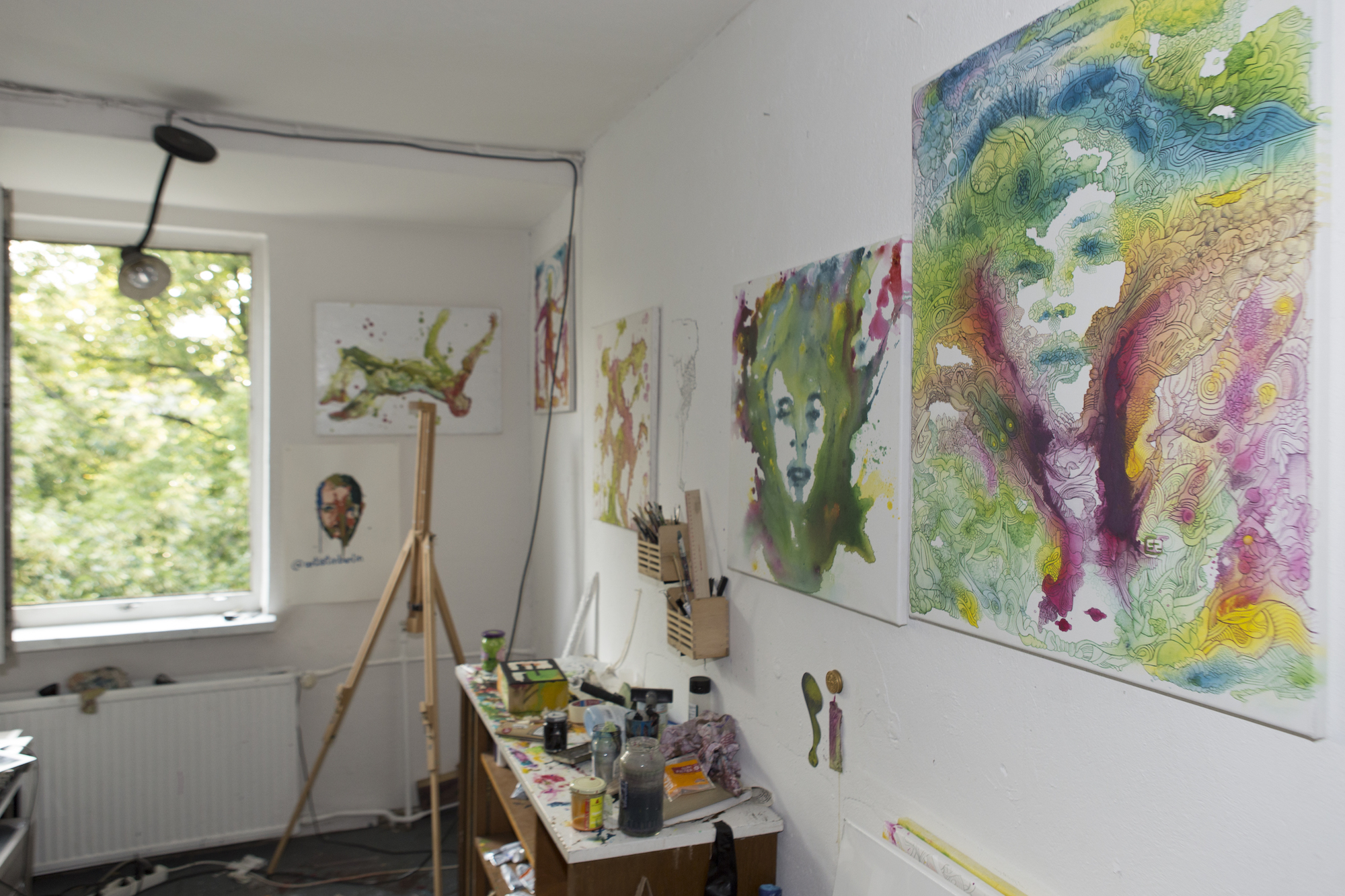 The top floor has gorgeous light and a studio shared by two painters and a hat designer. Each room is more lavish than the next – every door that opens feels like entering a new country of wild, eccentric taste. There’s something otherworldly about the whole place, its scattering of kitsch collectables situated in relation to their own impressive artwork, instruments, and plants; as if all imaginable tastes came together for one blowout decorating party extravaganza. The cavernous basement even features a cinema and several small rooms previously used for parties. 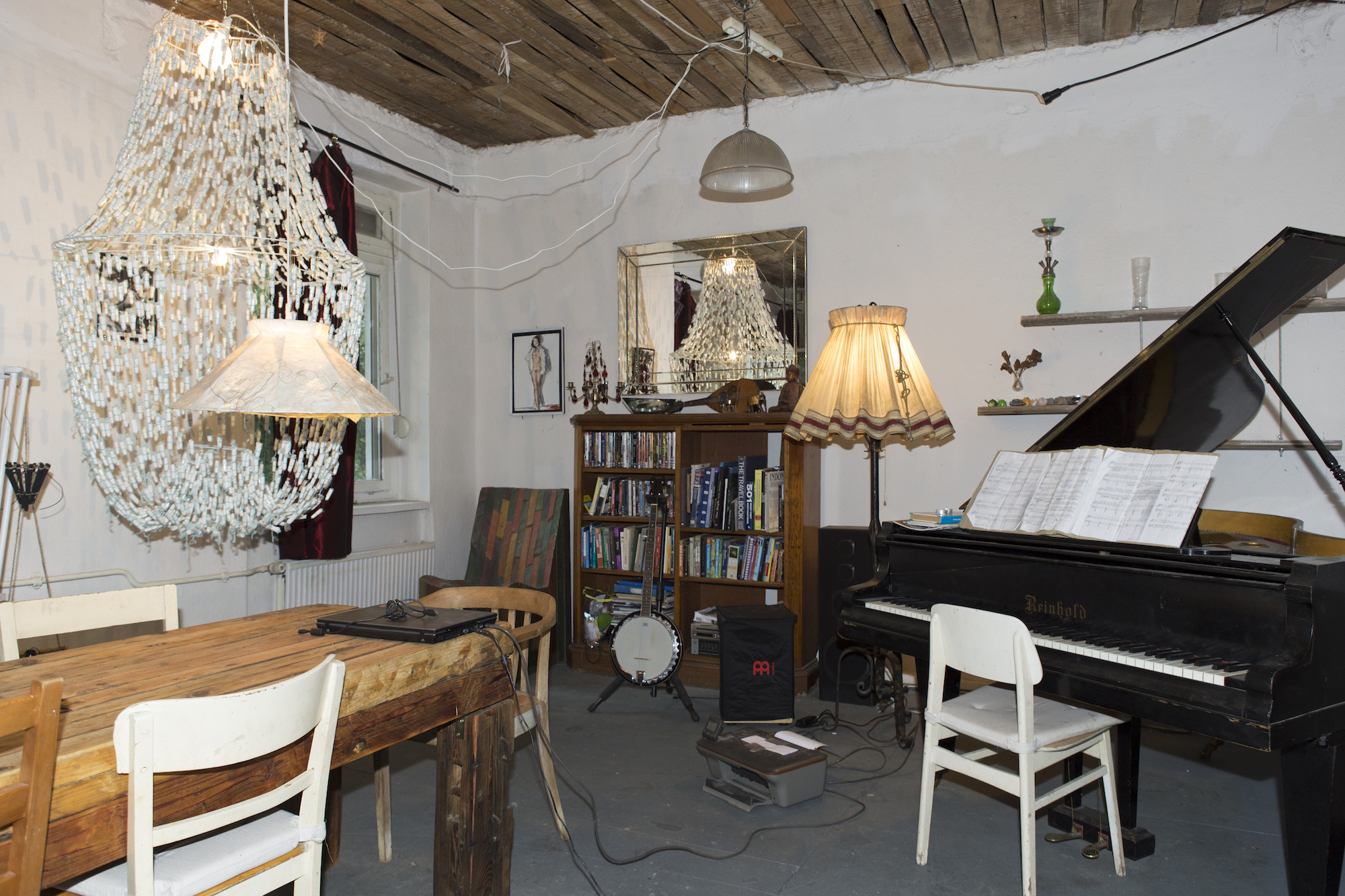 We wonder if there are any house rules. “Respect!” says Jody. He tells us that because they live so closely, they’ve worked hard on creating a dialogue about what living in the space means, and how to negotiate issues that might come up. “It’s not just random people,” explains Enrique, a painter from Italy. “Over three years we’ve had the time to find the right artists in some way.” It has taken awhile, but now with three painters, two musicians, a filmmaker, a photographer, and a hat designer having hopped on board, they’ve found a constellation that really works. They don’t choose their house mates based on discipline: “It’s not really about what you do,” says Leo, “it’s about the person you are.” This, of course, gives way to the group working together on projects. “We collaborate sometimes,” Enrique tells us, “with music, and visuals, but it all happens organically.” The space also often features events including concerts, performances, and Thursday night drawing sessions.

But what’s it like for a bunch of creative people to live up here in semi-suburban Wießenesee? “You can see the contrast between us and the rest of the community,” explains Leo. “Sometimes the police stop by because the music’s too loud, but they don’t really care. We had a festival in June. 20 bands during two days, it was a really beautiful event. Anyway, the police came and just told us to close the windows. Fortunately there aren’t many neighbours.” 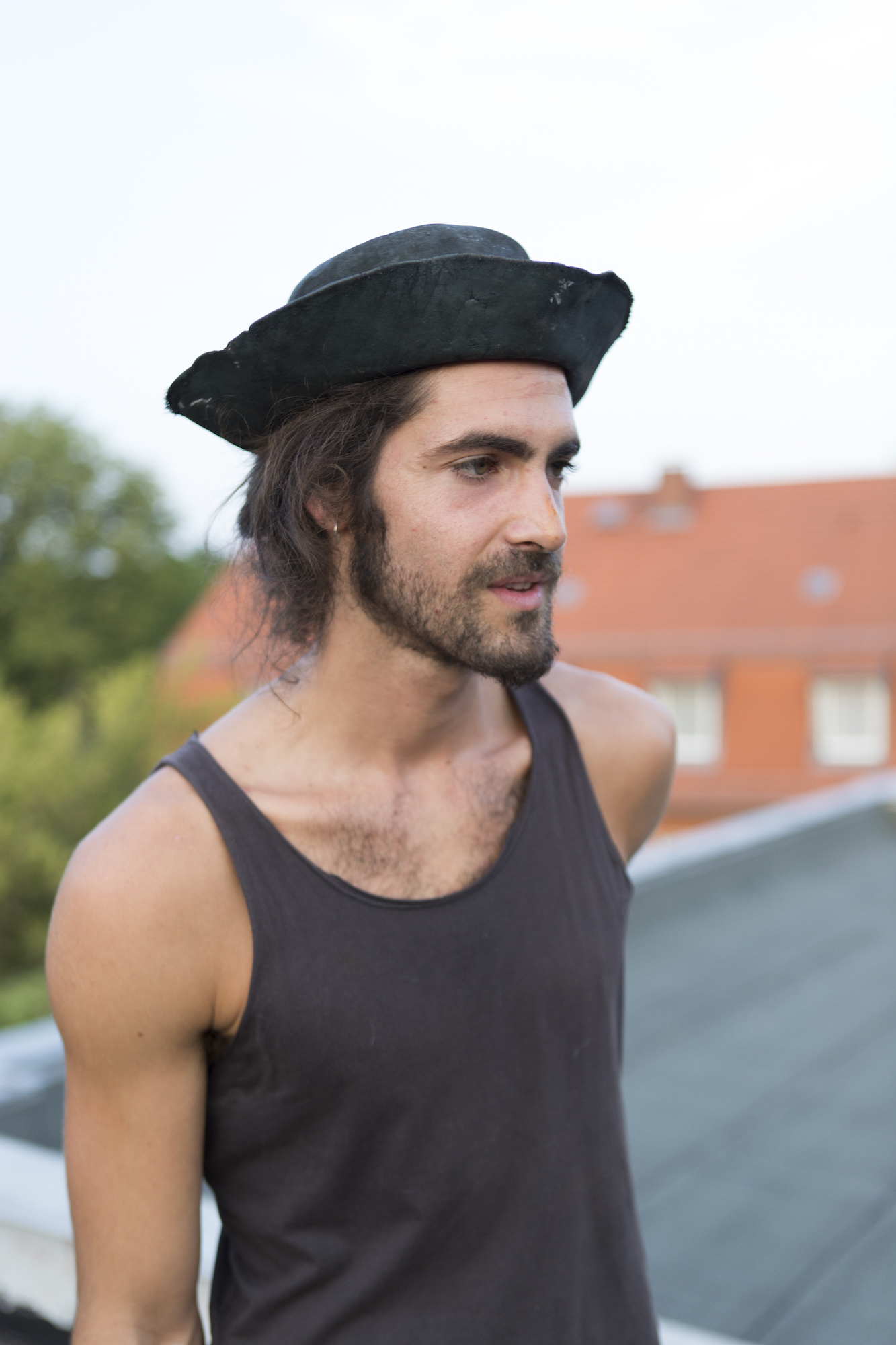 The art community isn’t as vibrant as they would like up here. There is the ECC, but the prices are too high now (a general problem for studio spaces in Berlin). “Things have changed very quickly in the three years I’ve been here,” adds Leo. Yet, it’s the longest he’s stayed put in a place since leaving his home in Tuscany, “I really like the freedom you have here in Berlin, the freedom to create. For example, a place like this in another city might not be possible.” He bristles at the word project to describe his alternative lifestyle. “It’s not really a project, it’s a way of living.”

It’s after 8:30, the band still hasn’t arrived, and the sun is beginning to set, so we rally the residents together and climb up onto the roof for a group picture. As they huddle together it’s certainly clear that it’s more than just a group of artists – it’s a family. Next February their Kunstlerhaus will be torn down to make way for a new construction, so they’ll look for a new place to call home. What are their plans before then? “To live as much as we can,” Leo says.

Find out what’s happening at the Kunstlerhaus on their Facebook page. The Revive Project has recently located to Wroclaw, Poland, but luckily they still deliver once a month to Berlin. Check out their selection of custom-made tables, lamps and more. 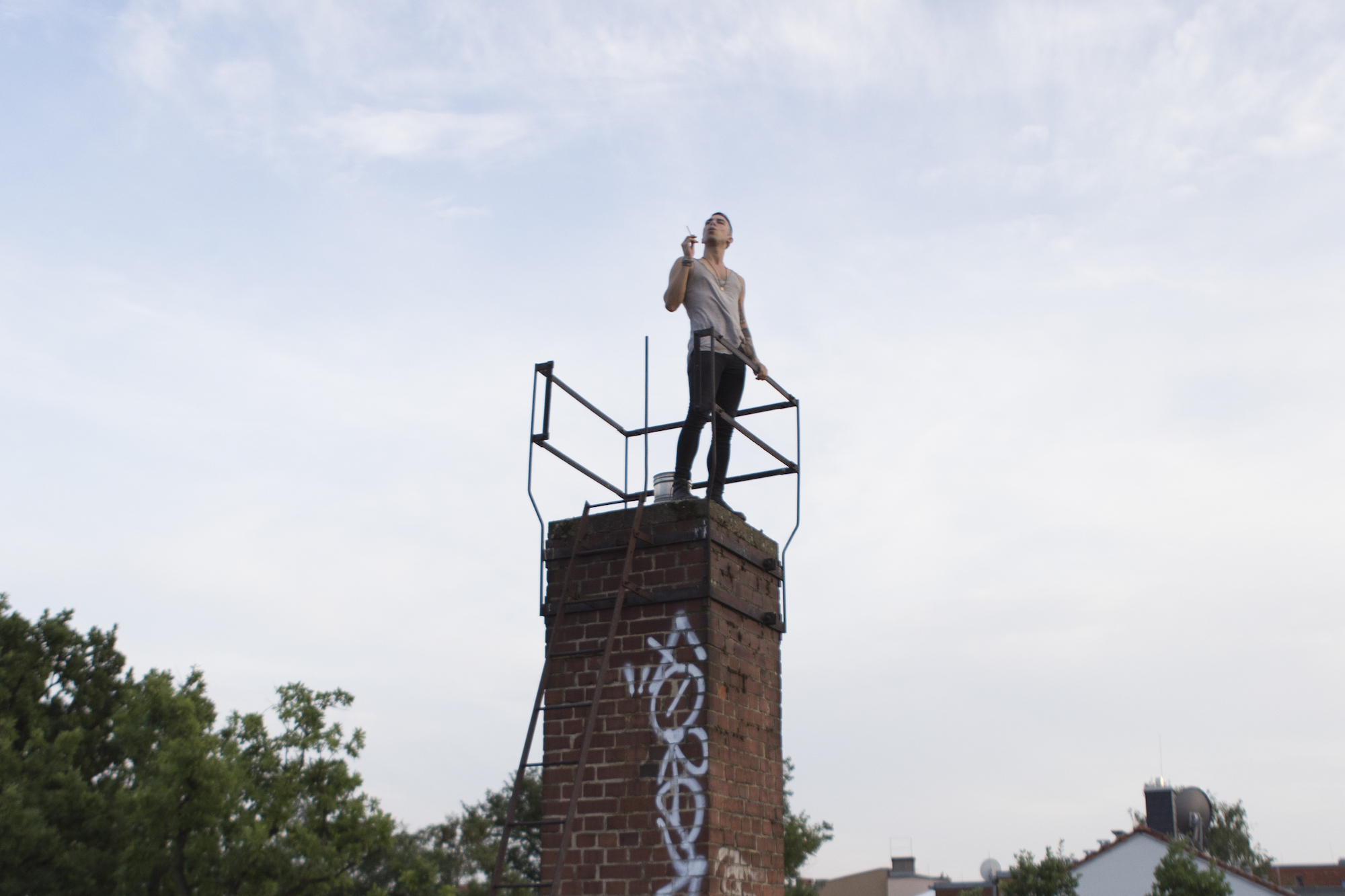